A dozen island beauties that light up the Aegean 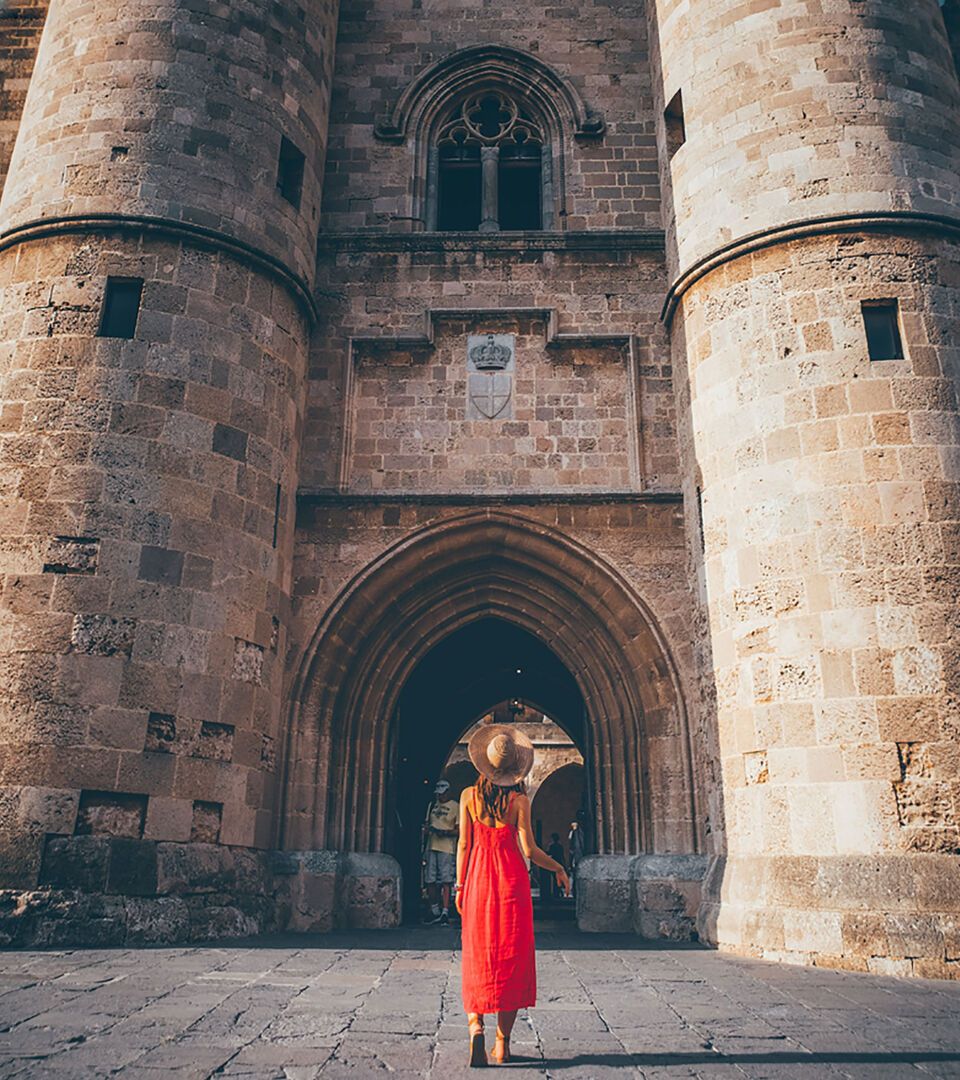 Today
14°
WED
14°
THU
16°
FRI
14°
SAT
15°
With endless beaches and unexplored islets, castles and ancient civilisations, the Dodecanese islands – which include popular Rhodes and Kos – offer the perfect blend of cosmopolitan and unexplored

A cluster of islands at the southeastern edge of the Aegean that includes popular Rhodes and Kos, the Dodecanese islands form a bridge between Europe and the East.

Whichever of the Dodecanese islands you go to, you’ll find traces of peoples and cultures that have made their mark over the centuries: Ionians, Romans, Byzantines, Venetians, Ottomans and Italians. Each island has its own character and all offer opportunities for relaxation, sightseeing, adventure and great food – with a backdrop of beautiful beaches.

Whether traveling with family or friends, you’ll find the island that’s right for you. Some Dodecanese islands are extremely popular, like Rhodes and Kos, and others have a virgin charm, like Kalymnos, Symi, Kastelorizo, Kasos, Karpathos, Astypalea, Halki, Lipsi and volcanic Nisyros. And then there’s Patmos, the Jerusalem of the Aegean, famous as the place where St John wrote the Bible’s Book of Revelation.

Endless days spent on the beach

You’ll find it hard to choose among the seemingly infinite number of beaches on the Dodecanese islands. Each is special in its own way. If you’re feeling active, there’s scuba diving, snorkelling and all sorts of water sports. And if you’re looking for something more quiet and intimate, you can sunbathe, swim and relax at secluded coves and beaches.

On Rhodes, the beaches are fun for everyone: tubing, jet skiing, stand-up paddleboard and windsurfing go hand in hand with a myriad of lively beach bars. Elli, Ialyssos, Lindos, Agathi and Kiotari are the standouts and the best windsurfing takes place at Prassoni.

Karpathos’ golden coast will also impress, with the award-winning, sandy Apella and Amoopi among the highlights. Kos also has glittering beauties for uninterrupted beach-days in the sun. But if tranquillity is more your thing, then head to Kalymnos, Lipsi, Tilos and Armathia, near Kasos.

The cultural treasures of the Dodecanese

The Dodecanese islands have a rich history, visible throughout the island chain in the form of ancient citadels, castles, museums and important archaeological sites and monuments. Among them are Rhodes’ acropolis (Monte Smith) with its Doric temple and ancient stadium, the ancient acropolis of Lindos, Ialyssos and ancient Kamiros. On Karpathos, visit ancient Vroukounda and Arkesia and the palaces of Doric Nisyros on the islet of Saria.

Make time to tour exhibits and monuments wherever you travel in the Dodecanese islands: on Rhodes, the Palace of the Grand Masters, the Archaeological Museum and the Aquarium; on Patmos, a stately home that has been converted into an exceptional gallery (the Nikolaidis mansion) and don’t miss out on the Volcanic Museum on the island of Nisyros.

Karpathos is famous for trekking trails of exceptional beauty, alongside mountain cliffs overlooking the big blue. Meanwhile, Kalymnos is a magnet for hikers and rock climbers from all over the world, as it boasts more signposted trails than you could possibly ever complete and 60 climbing venues of different levels of difficulty.

The unforgettable tastes of the Dodecanese

Rhodes, the first island in the Aegean to make wine, has dozens of vineyards and plenty of excellent wine for you to enjoy. In the island’s villages, local dishes await and the desserts are just as memorable. Particularly noteworthy is melikouni (a sesame bar with honey), served at weddings and baptisms. On Kasos, you’ll never tire of mizithra (the traditional cheese) and on Kalymnos you’ll eat mououri (lamb stuffed with rice), like the Dorians. On Symi, don’t leave without sampling the fried shrimps (small, flavourful and spiked with chilli flakes).

The Dodecanese islands in Greece

Within the beautifully preserved medieval Old Town of Rhodes (a Unesco World Heritage Site) are some incredible monuments, such as the Street of the Knights and the Palace of the Grand Masters. Further afield is the ancient acropolis of Lindos, as well as the grand public buildings of Mandraki and the small fort of Agios Nikolaos. The Valley of the Butterflies, a lush green canyon that attracts millions of butterflies and hundreds of visitors every year, is also popular.

Tick off all 8 items on Rhodes’ ultimate bucket list

Kos, the birthplace of the father of medicine

Kos has numerous must-sees locations, chief among them the Asclepion, built to continue the work of Hippocrates, the father of modern medicine and the island’s most famous son.

8 Must do’s to experience Kos at its best

This tiny piece of land is one of the most tranquil places in Greece. Your first stop on Astypalea should be Hora with its windmills and whitewashed homes, reminiscent of a Cycladic settlement.

5 reasons why Astypalea will be your favourite summer hangout

Patmos, an island revelation in the Dodecanese

The Monastery of St John the Theologian, the picture-perfect Hora of with its grand, stately homes and the mystical ambience of the Cave of the Apocalypse, are just part of what give Patmos its unique identity.

9 ways to feel the spirituality of Patmos

There is so much to love about Karpathos. The village of Olympus is a 9th-century medieval hamlet that continues to defy the march of time with its windmills, old stone ovens and picturesque chapels, making it one of the most impressive sights of the Aegean. And don’t miss out on Apella, a beach of unique beauty, and nearby Kasos for that special kind of getaway.

8 reasons to make you want to explore Karpathos

Among the many treasures of Kalymnos are Vathy and Esperidon, the most beautiful fjord in the Aegean. And don’t forget the sea sponges, it’s what made this island famous.

Nature reigns supreme on Tilos. Highlights of the island include the Harkadio Cave, where fossilised bones of dwarf elephants were discovered, and the great monastery of Agios Panteleimon.

Symi and Kastelorizo are famous for their neoclassical settlements that are architectural masterpieces. They are also ideal for swimming as they are wrapped in dazzling azure waters.

Wild Nisyros was formed by a volcano and boasts not one but three craters in its interior, along with a lunar landscape and the picturesque port of Mandraki.

Halki, the retro island with a vintage charm

Very close to cosmopolitan Rhodes but so very different, Halki is an incredibly beautiful little island. Its picturesque town greets you with colourful houses and around the island wonderful are beaches where life moves at a laid-back pace. Ftenagia beach with its emerald green waters is simply unique.

Leros is an island of green and blue in perfect harmony. With excellent local cuisine and bays with water as clear as glass. Discover the mysteries of Leros in Lakki, Agia Marina, Alida and Padeli. It makes an ideal base for exploration by boat, not to mention the numerous opportunities for scuba-diving.

The little unexplored gems are rocky islets shaped into incredible forms by the elements, fiords that end up in white sandy beaches and turquoise coves.

FAQs about the Dodecanese islands, Greece

There are 15 big islands in the Dodecanese island chain, even though the literal meaning of the word Dodecanese is ‘12 islands’ in Greek. Many smaller islets are situated around the bigger ones, some of which are uninhabited.

The Dodecanese islands are located in the Aegean Sea, in southwestern Greece. You can see the coastline of Turkey from some of the islands.

Flights depart daily to Dodecanese islands such as Rhodes, Kos and Astypalea (which have airports) from Greece’s major cities, Athens and Thessaloniki. Alternatively, you can reach the islands by boat from the ports of Piraeus or Kavala and from other Aegean islands.

Experience the best of Dodecanese 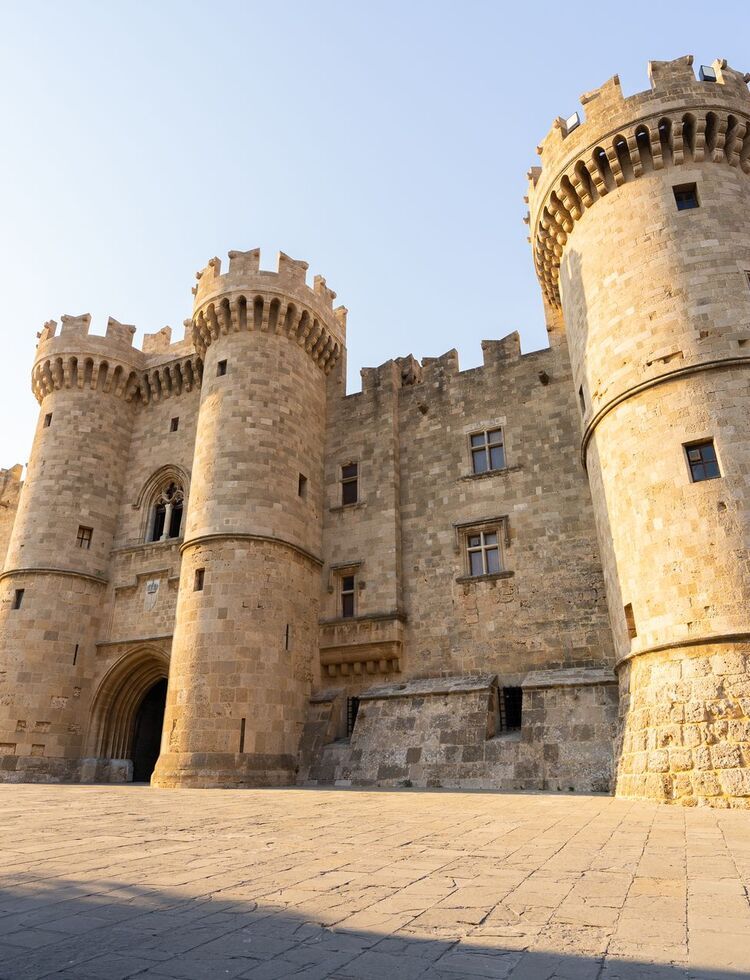 Feel the healing energy of the Asclepion of Kos 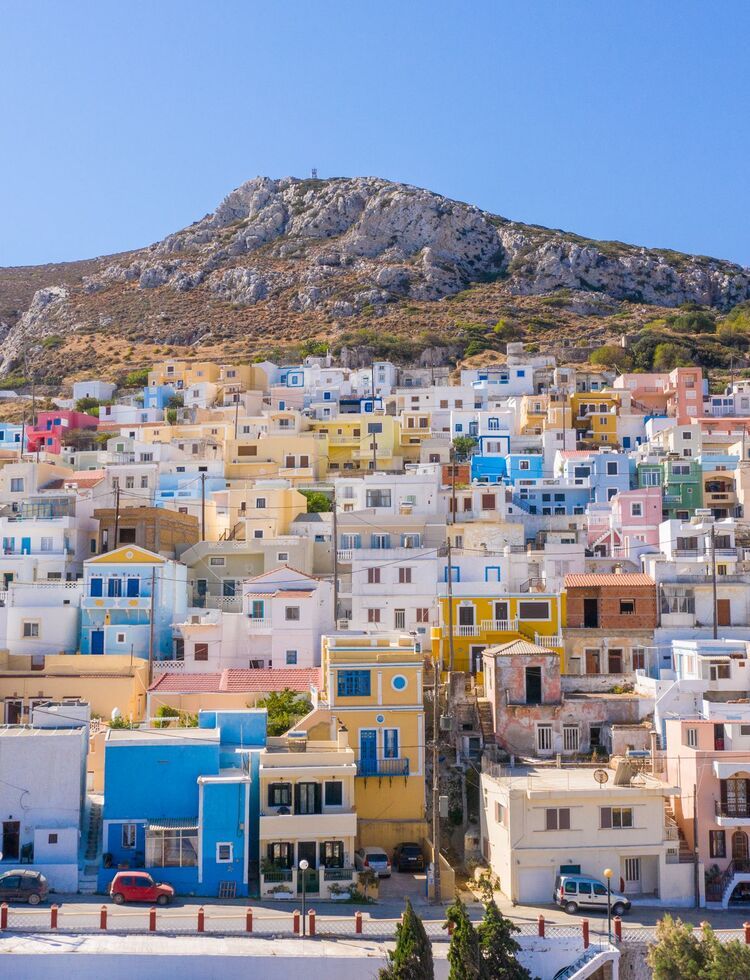 Colourful village-hopping through the mountains of Karpathos 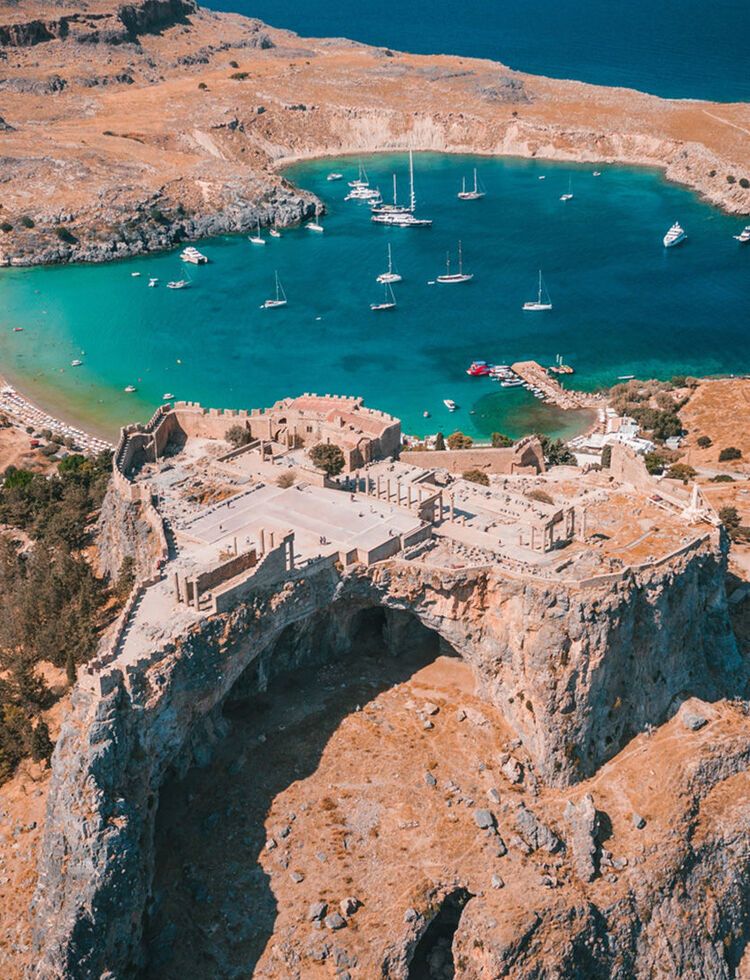 Discover the wonder of Lindos on Rhodes 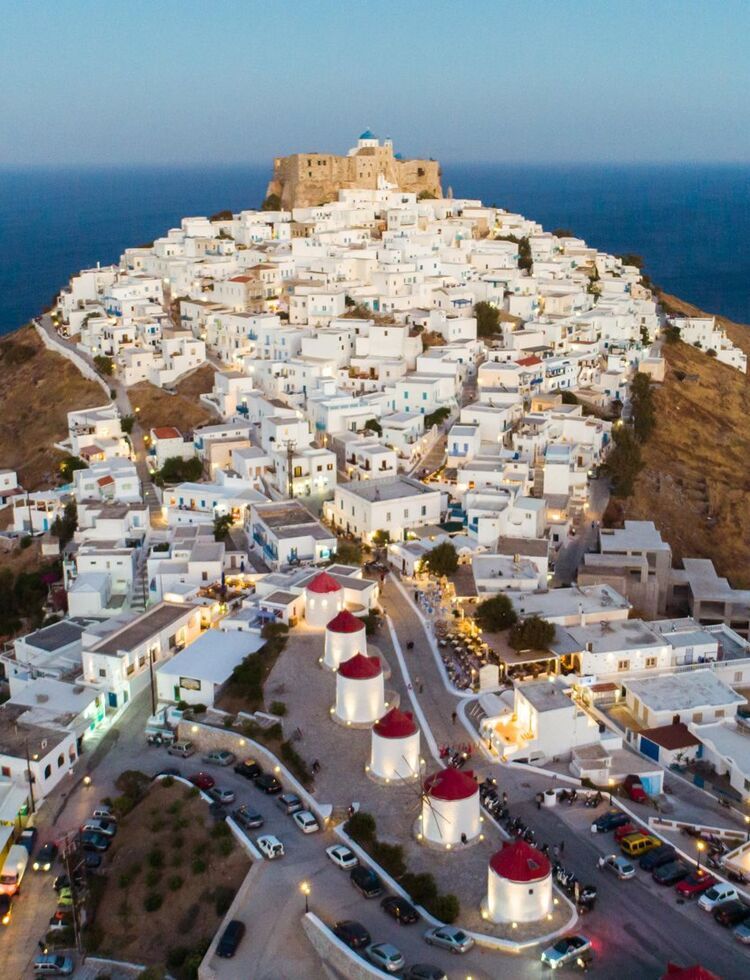 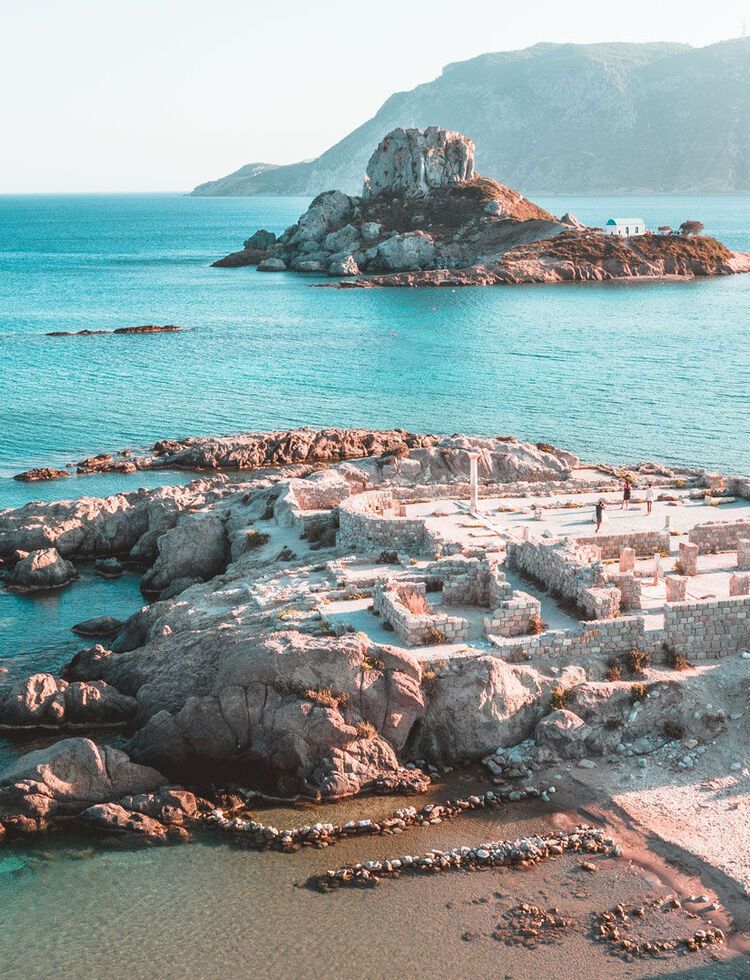 Sun, sea and a splash of culture at Agios Stefanos beach on Kos

Group
Sea Kayaking Tour -The Pirates’ Route is an unforgettable sea kayaking tour which lasts half a day. Join us to enjoy exploring Rhodes from the...
Group
Lindos Hiking is a day guided hike to the gem of Rhodes, the Acropolis of Lindos.
Group
Explore More in Rhodes North Route Explore more on the island of the Knights, Rhodes, on a semiprivate safari tour for up to 6 persons...
EXPLORE ALL
Offer

#discovergreece
See the gallery
The most famous village in Karpathos island, with panoramic views
Exploring the medieval old town of Rhodes
Lindos beach in Rhodes
Hippocrates’ Asclepeion, a holistic healing centre
Agios Stefanos, one of the most photogenic beaches on Kos
Hora's famous castle, majestic views of the Aegean, windmills and whitewashed homes make up a remarkable traditional settlement
The windmills of Hora
Kalymnos is an international climbing destination, overwatching the island of Telendos
Livadia, the harbour of Tilos
Symi port
Vlad Kiselov
Two-storeyed, painted with vivid colours – not white – they climb the hill behind it like tiers in an amphitheatre, with the sea as the stage
Cats in a street of Mandraki village on Nisyros island
Chalki Island, one of the Dodecanese islands of Greece, close to Rhodes
The picturesque village of Agia Marina in beautiful Leros island, Dodecanese
Enjoy swimming, diving and fishing in crystal clear waters of exceptional beauty
Vangelis Petalias

Islands in the Dodecanese 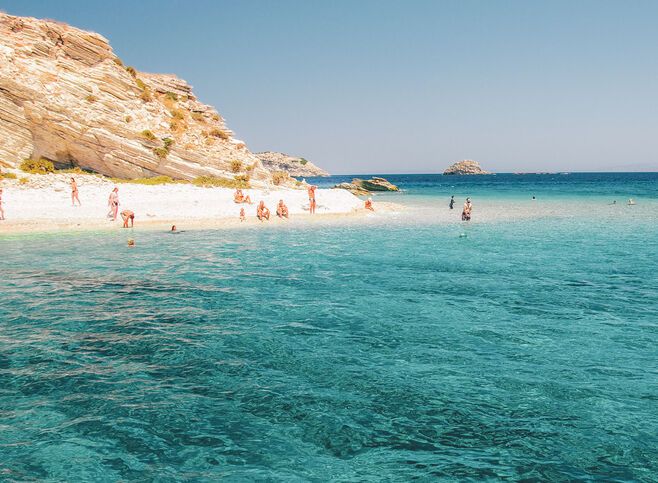 A time capsule of authenticity in the Dodecanese 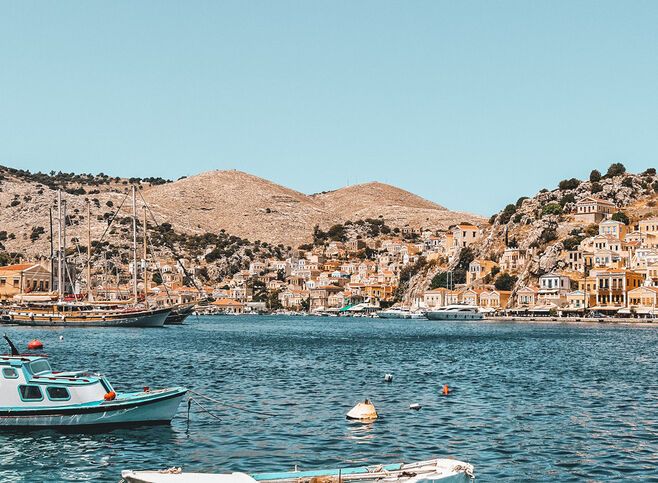 An inspiration for poets and painters 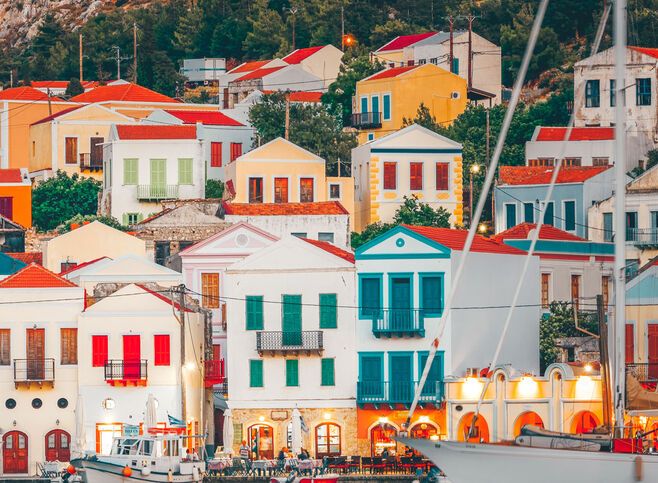 The Oscar-winning star of the southeast Aegean 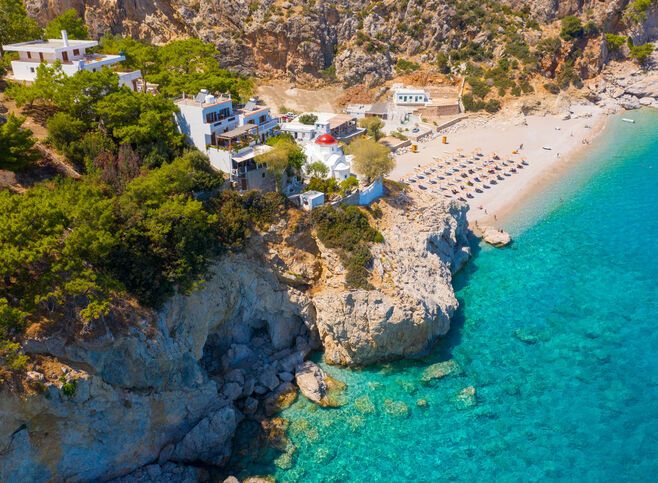 10 of the best beaches in Karpathos

Blessed with remote and rugged beauty, the beaches of Karpathos are known for their diversity and unique character. Let us help you pick out 10 of the best beaches in Karpathos

If you love active holidays, you’ll adore outdoor adventures in Greece: Hiking, sailing, kayaking, biking… even skiing. If it involves mountain or sea (or both), you’ll find it in Greece.
SEE ALL