A masterpiece in passion and style 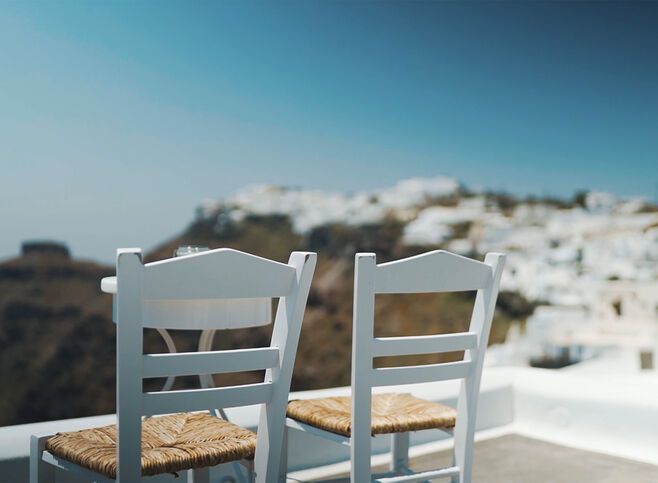 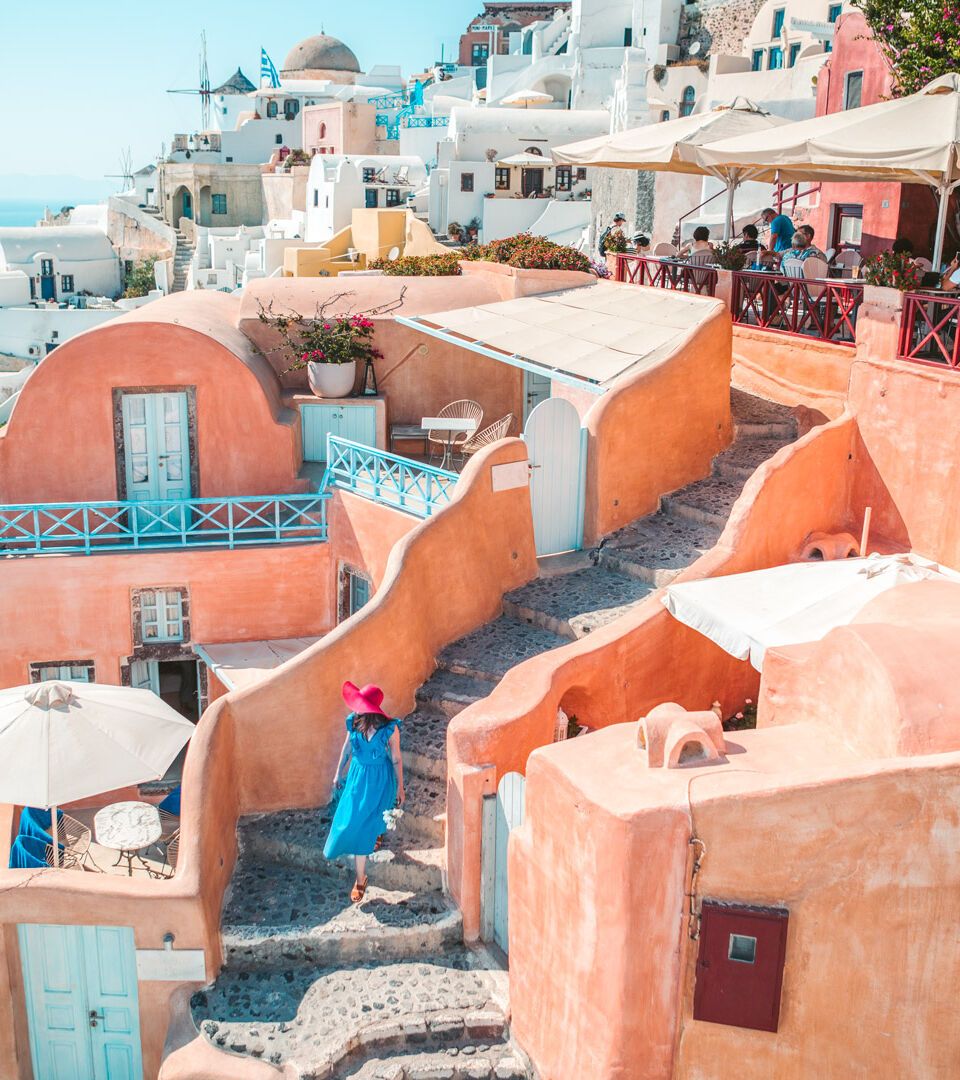 Today
28°
FRI
25°
SAT
26°
SUN
26°
MON
26°
The power of the volcanic island of Santorini creates an energy that overwhelms the senses. Exquisite luxury, amazing food and wine and the unforgettable Santorini sunset are just the start of what this legendary Greek island in the Cyclades offers visitors.

Santorini is an island-phenomenon whose reputation precedes it. And for good reason. On this legendary island in the Cyclades, all your senses seem magnified, a product of its many contrasts: black earth against whitewashed homes clinging to the cliff-side, or wild volcanic sculptures against sleek Cycladic lines.

Also known as Thera in Greek, Santorini is an island immortalised by poets and painters thanks to its celebrated light, multicoloured cliffs and picture-perfect sunsets. If it’s always been your dream to visit Santorini, here is just the start of what awaits you.

Things to do on Santorini island

Lay back and let the luxury-fest begin

Santorini and luxury are synonymous. This is the island of infinity pools that flirt with the edge of the cliff, with the Aegean Sea laid out in front of you in all its glory. So how about starting off relaxing on a sunbed, a refreshing cocktail in hand? Or perhaps a romantic meal for two, paired with a fine wine (made locally, of course)? You’ll be in the mood to explore more in no time.

Explore Akrotiri, the Pompeii of the Aegean

Akrotiri is a prehistoric city that lies beneath a bioclimatic shelter. Walking over wooden bridges, you will encounter one of the most important and well-preserved civilisations in the Mediterranean, which was covered by the ashes of the great volcanic eruption of 1600 BC. Visit the museum of Prehistoric Thera, at Fira, to admire its famous frescoes, among them Spring, The Monkeys and The African. A world frozen in time awaits you on the island of Santorini.

Taste the exquisite cuisine of Santorini

The cuisine of Santorini boasts extraordinary ingredients thanks to the nutrient-rich volcanic soil. Amongst the island’s specialities are its famous sun-dried cherry tomatoes, fava beans (split peas), capers, and white eggplant. The local chefs are always experimenting, combining traditional recipes with modern gastronomy, making the island a top culinary destination in Greece.

Santorini island is lined with unique beaches in exotic colours of black, red, and white, a product of its explosive past. At Kokkini Paralia (Red Beach), Aspri Paralia (White Beach), Perivolos, Perissa and Kamari, the earth has been naturally transformed into immortal works of art.

Take a stroll along the rim of the caldera

Top (literally) of all the experiences to enjoy on Santorini island is to take a stroll along the rim of the caldera, from Fira to Firostefani and Imerovigli. The more adventurous can challenge themselves by taking the path to Oia, passing the Prophet Elijah’s Church, Chapel of the Cross and Black Mountain, which is iridescent at sunset.

Enjoy a hike with a caldera view

Viewing the sunset from Oia, as thousands do each year, is a ritual. For a few minutes, the energy of the landscape is palpable. When the fiery sun sinks into the sea within the caldera, this scene will be forever cherished in your heart.

Take a boat trip to an island in the caldera

You can easily rent a boat or hop on a day cruise at Athinio, Gialos or Ammoudi and take a tour around the caldera. Discover the islands opposite Santorini, especially Thirasia where you can experience the Santorini of 50 years ago.

Head back in time with a boat trip to Thirasia

Visit the volcano of Nea Kameni

Red and black rocks create a wild landscape around the crater on Nea Kameni, another small island at the centre of the caldera. From the top of a volcano with a 2.5 million-year history, the view is simply incredible. The myth that Santorini is the ancient city of Atlantis, which submerged over 9,500 years ago, comes to life before your eyes. And just off shore, there are thermal waters that form a volcanic spa.

The wineries of Finikia

A stone’s throw from cosmopolitan Oia, you will discover the multicoloured settlement of Finikia. These old wineries have been converted into homes that are not your typical Cycladic stonewash white but rather are painted in ochre, blue and pink, and provide a beautiful contrast against the dark blue background of the Aegean. Walk the cobblestone streets, take a rest in the courtyard of St Matrona, with its huge palm tree, and taste the local delicacies in the area’s tavernas.

The commanding conical rock of Skaros, visible from the settlements of Fira and Imerovigli, is situated 330m above sea level. Here you will discover the medieval capital of Santorini. And within the Venetian castle, you will find houses, temples and the former residences of the nobility. Climb to the top and the entire panorama of the caldera – from Oia to Fira – unfolds before you.

If you prefer a quieter, more intimate experience, enjoy the sunset in Skaros at Imerovigli, in Kato Fira, or at the lighthouse of Akrotiri.

The taste of ancient vineyards

It’s time to invoke the spirit of Dionysus! Try the one-of-a-kind whites and reds of Santorini, especially the renowned Vinsanto from the vineyards that have a legacy of more than 3,200 years.

Sample the wine routes of Santorini

Lessons in the local cuisine

Enrol on one of the many culinary classes on offer and learn to make Santorini’s rich and varied delicacies, such as tomato fritters, sfougato, melitinia and sweet koufeto.

In the mood for more? Here are 12 Unforgettable things to do in Santorini.

Experience the best of Santorini 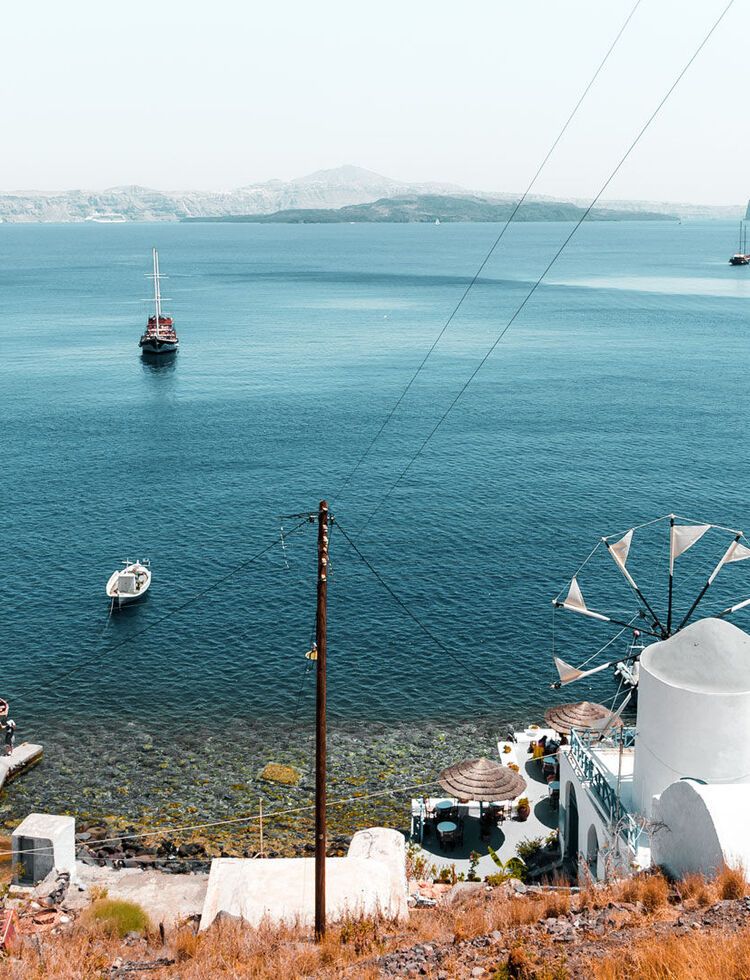 A boat trip to Thirasia, the Santorini of 50 years ago 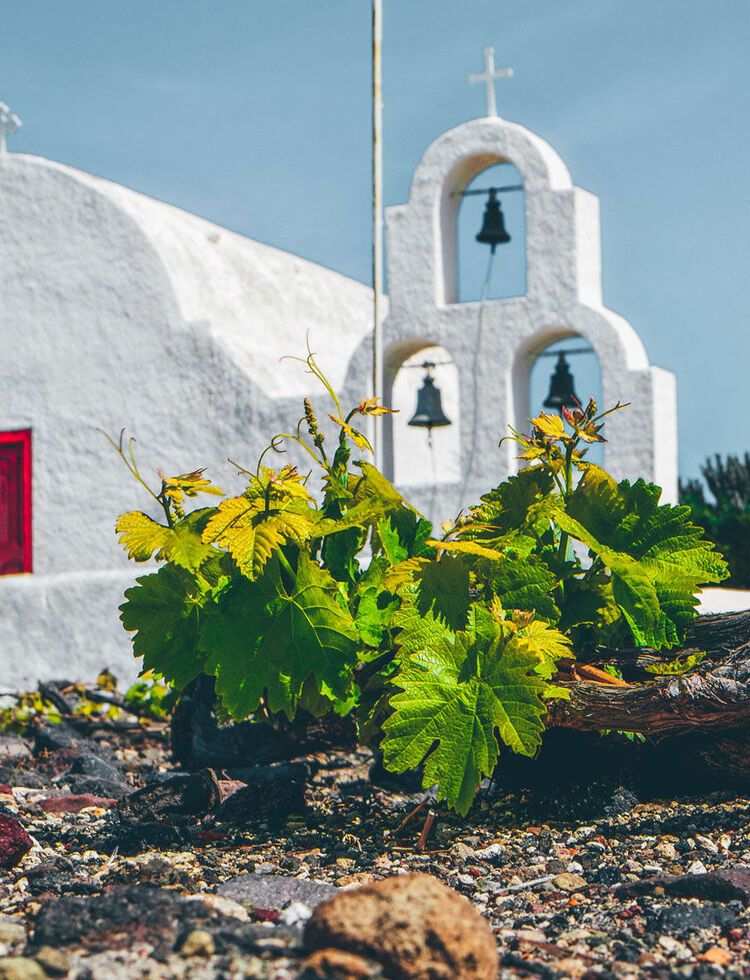 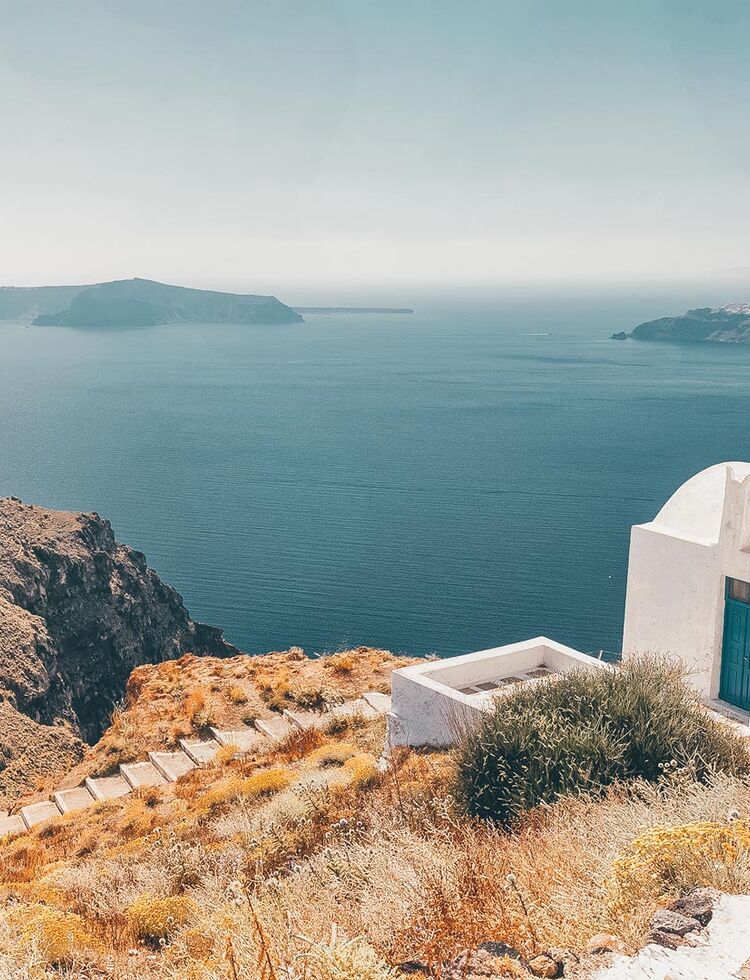 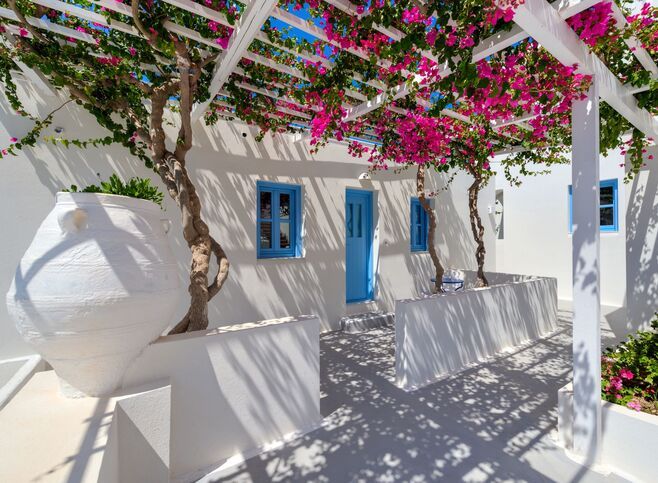 Hotel Sigalas is a small, friendly, family owned and operated hotel situated direct on the famous black beach of Kamari in the e... 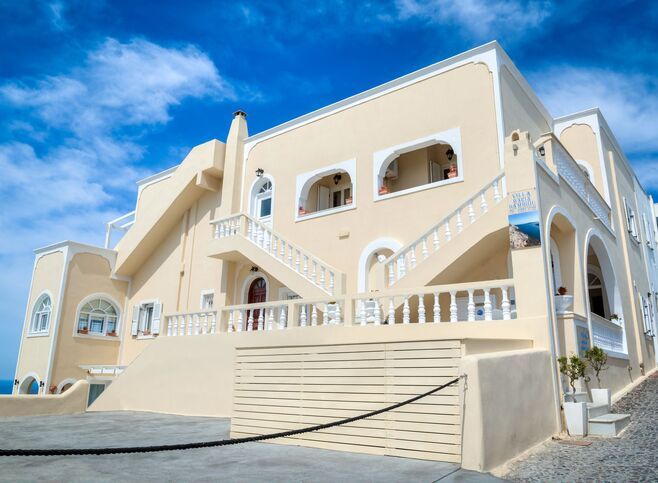 Towering high above the Caldera of Santorini, the most breathtaking view of the island, Villa Maria Damigou Suites &amp; Studios...

#discovergreece
See the gallery
View of Oia from above at night
View in Santorini
Cliff, volcanic rocks and a traditional chapel on Santorini
The Pompeii of the Aegean in Santorini
Things to do in Santorini Greece
Sunset in Santorini, in front of a white church
Santorini sunset firostefani
COVER STORY
Explore the magic of the Cyclades on the islands near Santorini
It would be so easy to visit Santorini and consider that nothing could beat its Cycladic perfection.
Discover It 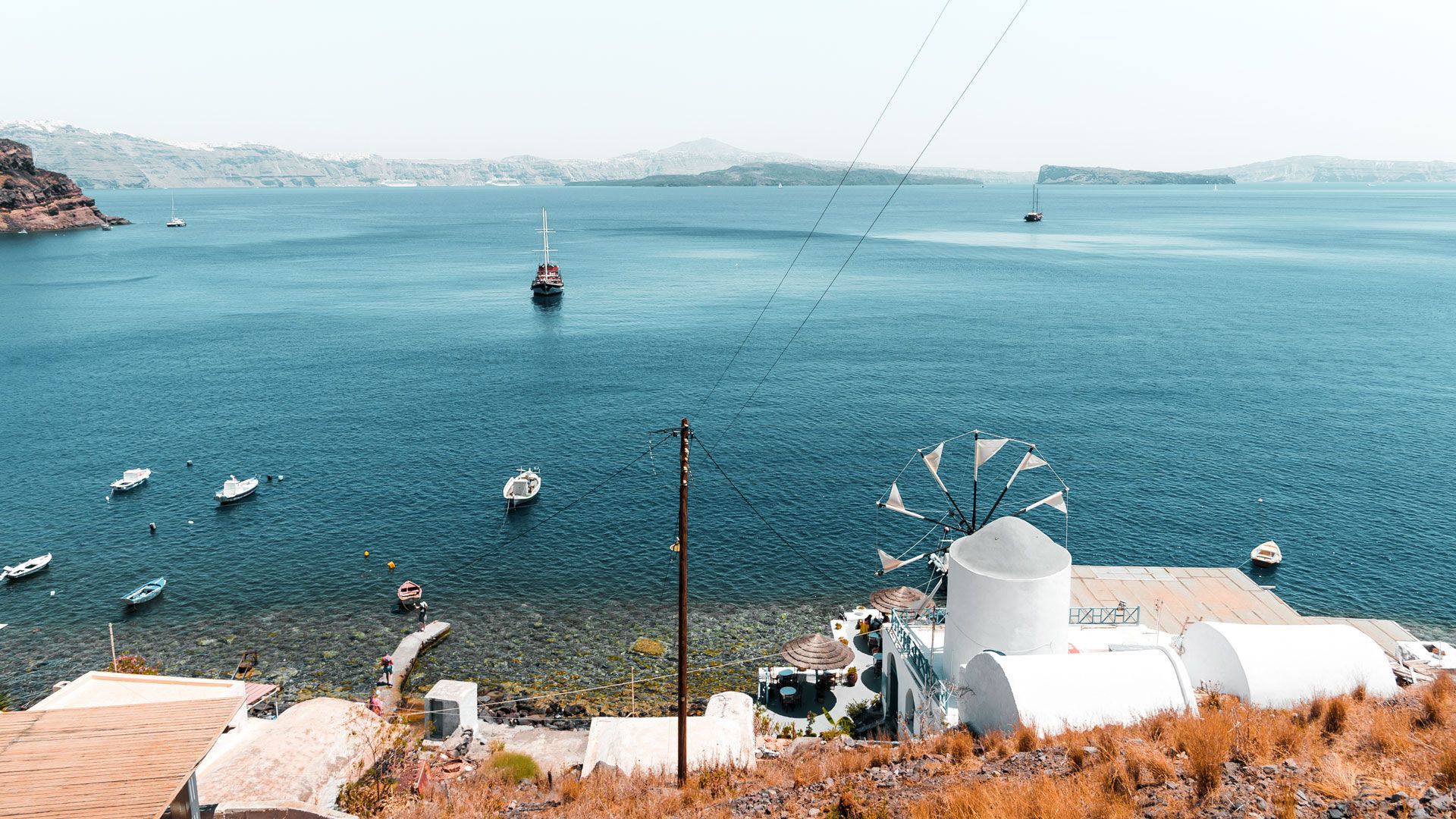 BEST OF
12 Unforgettable things to do in Santorini
Who hasn’t dreamed of visiting Santorini? The iconic caldera and chic Cycladic aura are part of you even before you’ve arrived.
Discover It