A class act in the Ionian that adores the spotlight 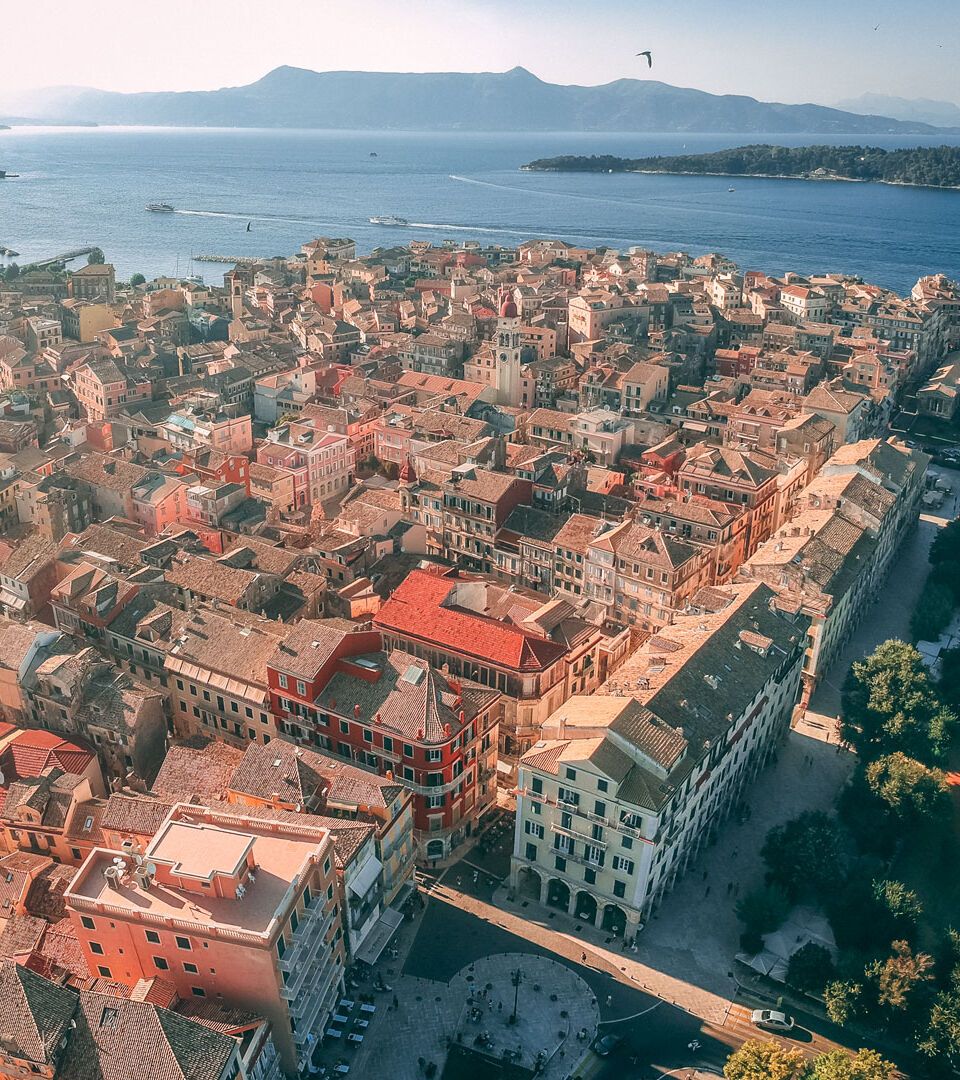 Today
28°
FRI
25°
SAT
25°
SUN
26°
MON
25°
One of the most popular holiday destinations in Greece, Corfu is an island in the Ionian Sea known for its cosmopolitan Old Town, spectacular sandy beaches and beautiful landscapes.

Corfu has a rich history that weaves a bewildering number of influences, with the Venetians, English, French and Russians all flourishing here and leaving their mark on the island.

In the Old Town, you’ll feel like an aristocrat walking along Liston Arcade and Spianada Square and gazing up at the Venetian forts and churches. And you’ll adore the romance of the labyrinth-like alleyways of Campiello (the medieval quarter of the Old Town) as well as the beat of the marching bands, particularly on festival days.

Holidays on Corfu are also famous for the food – with the many cultural influences expressed in dishes that show off Italian touches and the island’s delicious Mediterranean produce.

And don’t forget the beaches and swimming spots dotted around the island – not least the Canal d'Amour, where legend has it you’ll find your soulmate. Corfu island (or Kerkyra as it’s known in Greek) certainly knows how to seduce you.

Things to do on Corfu

Feel like a classic film star in the Old Town

Unesco has declared Corfu’s Old Town a world heritage site. Who couldn’t be impressed by the stately buildings, with neoclassical influences, or fail to be moved by the likes of the Palace of St Michael and St George, Liston Arcade, Reading Society, the Catholic Cathedral, Maitland Rotunda, Ionian Parliament and the Kapodistrias family’s mansion? In the famous alleyways of Campiello, you will feel like a star in a period movie.

Admire the Venetian forts and towers

On the eastern side of town, the rocky shore crowned by two low peaks gave the name Koryfo (or peak) to the island. You enter the Old Fort (Palio Frourio), built in the 13th century, via a bridge over a seawater moat. It includes the Porta Sopranza, the British barracks, two winged lions of St Mark, the Madonna del Carmine, the Savorgnan Bastion, the Tower of Sea and the Tower of the Land (Castel del Mar, Castel della Terra) and the British-built church of St George resembling a Doric temple.

Corfu’s Old Town is often characterised as an open-air museum and each sight is a journey through time. Towering above the northwest border of the capital, the other guardian, the Neo Frourio (New Fort), is a masterpiece of military architecture built by the Venetians between 1572 and 1645. It is a fortress with planes and angles reminiscent of Picasso and Braque’s Cubist periods.

Get your camera ready for Cannon and Mouse islands

Two trademark views on Corfu are actually other islands – the diminutive Pontikonisi, which translates as Mouse Island, just large enough to hold the Pantokrator Monastery, and right next to it, the famous Vlacherna islet, with its 17th-century monastery dedicated to the Virgin Mary, connected to the mainland by a narrow causeway. Mass is held here on Easter Monday.

Corfu is known for its beaches but you can’t miss the Canal d'Amour, where a natural passage created by the smooth rocks forms a tunnel to swim down. Let us know if you find your soulmate at the end of it, as legend promises. Meanwhile, at Sidari you’ll enjoy spectacular sandy beaches with sandstone formations.

Take a boat trip to Paradise Beach in Corfu

Delve deeper into the many attractions of Corfu

By the village of Paleokastritsa, a lush blanket of green drapes across six rocky coves, with some scholars maintaining that this is the site of the mythical palace of King Alkinoos, where Odysseus stayed. Another highlight is the Monastery of Panagias, founded here in 1225. It reaches as far as the famous Angelokastro, built early in the 12th century, with its church of Agia Kyriaki hidden in a small cave.

Celebrate one of Greece’s most iconic Easter celebrations

Easter celebrations on Corfu are like no other. The island’s Philharmonic Society accompanies the procession of Christ’s epitaph on Good Friday and crowds follow the remains of the island’s patron, St Spyridon, the following morning. And then, on Holy Saturday, it rains botides – clay jars dropped into the streets from people’s balconies. Just make sure you keep looking up!

Feel like an aristocrat in Empress Elizabeth’s Achillion Palace

Corfu’s imperial past is one of the reasons it is considered one of the most glamorous destinations in Greece. Empress Elizabeth of Austria-Hungary, the legendary Sissi, chose the island to build her palace, a place where she found consolation after her son Rudolph’s suicide. It is an elegant Pompeian-style building with luxurious, neoclassical living rooms. In the beautiful gardens, you’ll admire the famous statue of Achilles in his death throes.

British High Commissioner Frederick Adam built this summer residence for his Corfiot wife, Nina Palatianou. Situated in a landscape of rare beauty, it occupies the site of ancient Corcyra, as the city was then called. The villa houses the Palaiopolis Museum and botanical gardens with more than 2,000 plant species that came from the British colonies.

Pastitsada (beef in a rich tomato sauce with pasta), sofrito (battered beef cooked in olive oil and wine) and bourdeto (fish stew) are among the regional delicacies you can enjoy in kitchens, traditional tavernas and restaurants of Corfu. They will enrich your holidays with the aromas and flavours of the Ionian.

Enjoy a culinary tour of Corfu

Get to know Corfu’s rich flora and fauna and old settlements on foot or by bicycle. Among the hidden gems are Pantokratoras, a lovely spot next to the saltwater lake of Korission in the south and the area around the northern saltwater lake of Antinioti.

A favourite destination for sailors, the uninhabited Diapontia islands north of Corfu are ideal for all those who enjoy diving and fishing.

Yes, Corfu has an airport with seasonal international flights and domestic flights from Athens throughout the year. The airport is found 2.5km outside Corfu town and can easily be reached by taxi or bus.

There are daily ferries to Corfu from the port of Igoumenitsa, in north-western Greece, about 485km (5hrs30mins) from Athens and 325km (3hrs45mins) from Thessaloniki. Public bus (KTEL) services are available from both cities. The crossing takes 1-1.5hrs. There are also ferries from Italy (Venice, Bari and Ancona).

The entire Old Town of Corfu is a UNESCO World Heritage Centre, filled with monuments (Venetian, British, French) and museums, such as the Archaeological Museum, Mon Repos & Achilleion Palace, Casa Parlante and the Museum of Asian Art (inside the Palace of St Michael and St George). The Old and New Fortresses are landmarks of Corfu, but the entire Old Town is like an open-air museum, with churches, squares and Venetian-era buildings. The focal point of the Old Town is Liston and Spianada Square.

Experience the best of Corfu 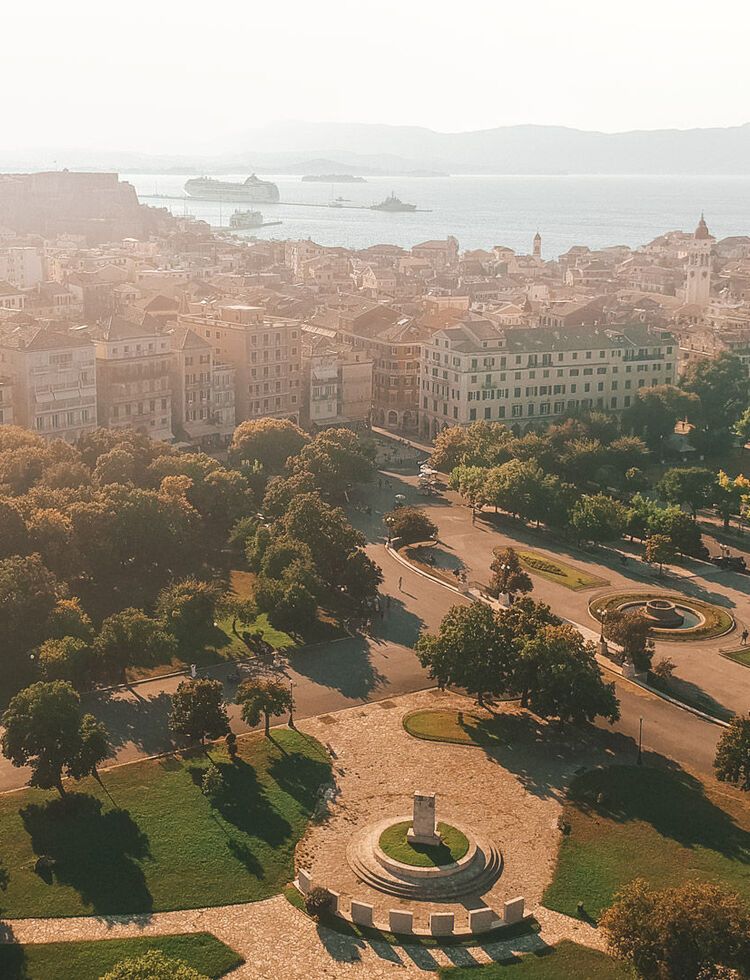 A food & drink guide to Corfu 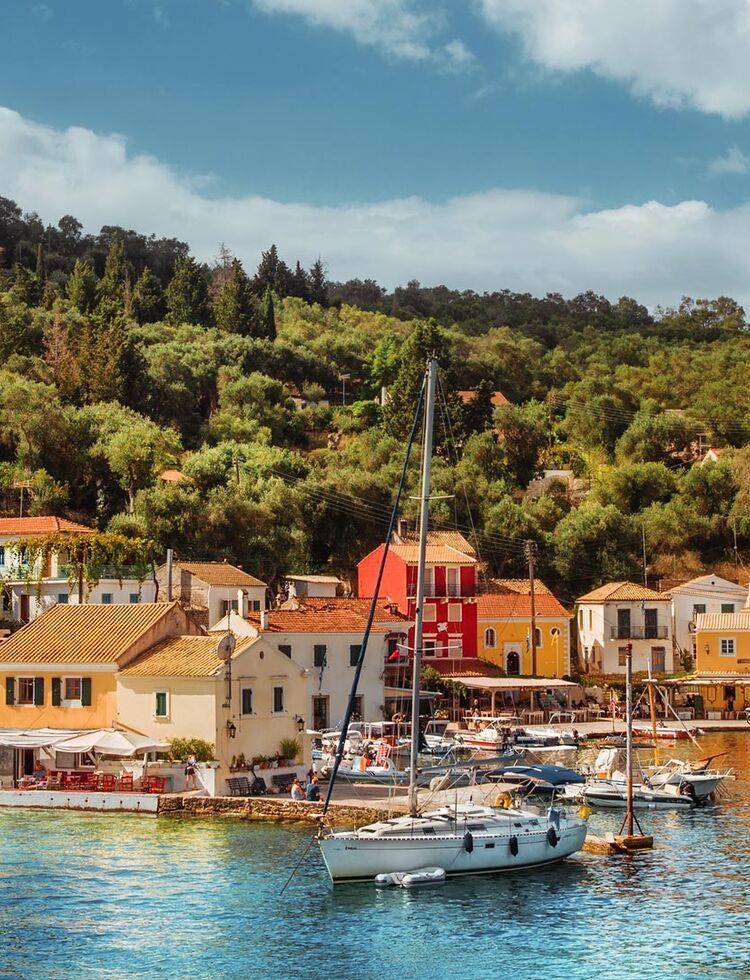 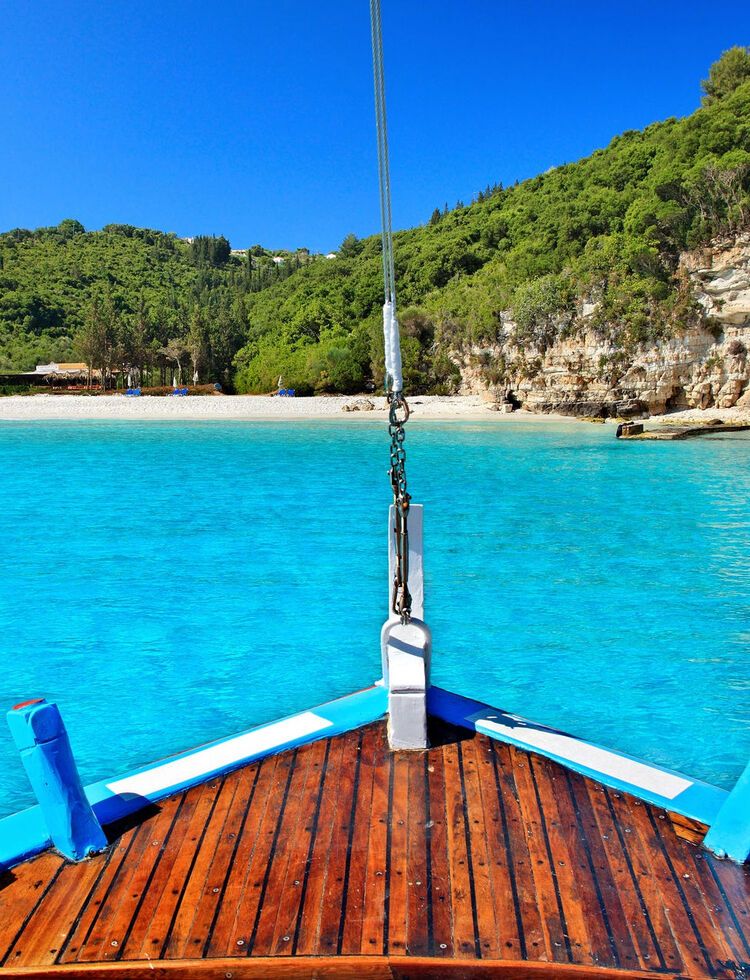 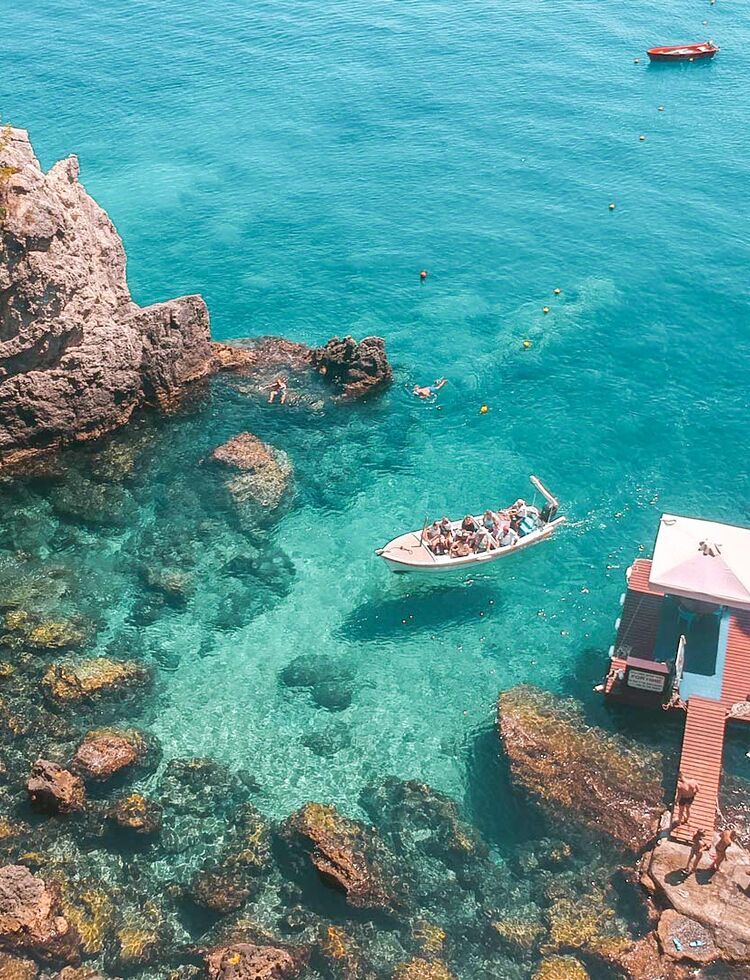 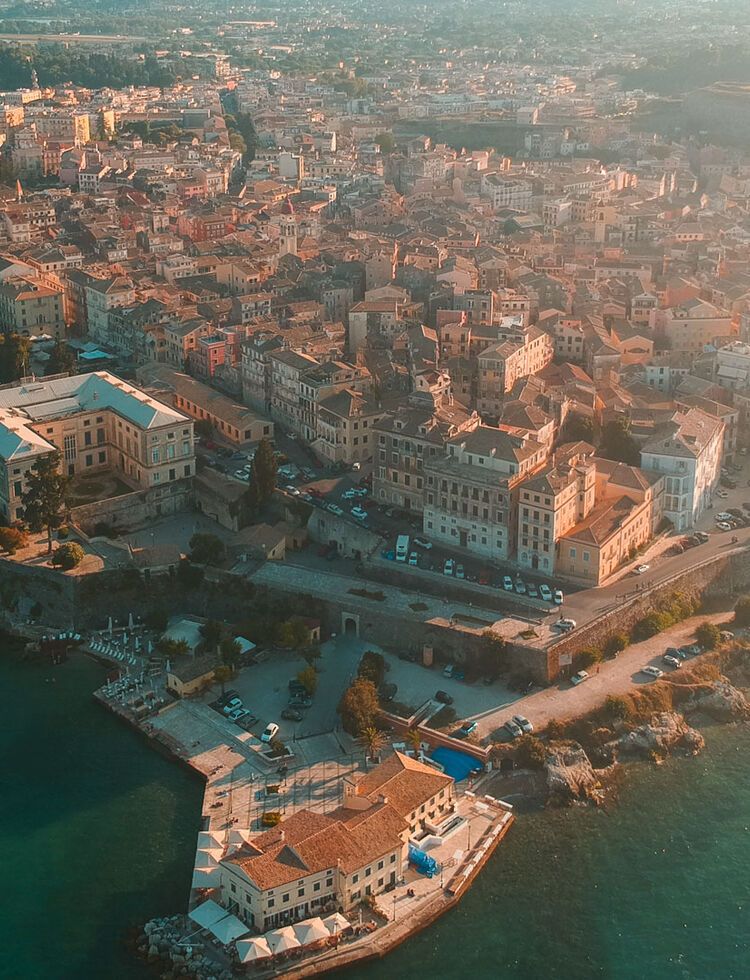 Group
Indulge your inner foodie on this Small Group Corfu Food Walking Tour and sample the edible delights of Corfu!
Private
You can already imagine your Instagram stream… all those Ionian blues and greens, your dream beaches, villages and people, and this selected sunset that you...
Private
Following a pickup from your hotel or cruise ship, board your private vehicle and set off an exciting beach tour to discover two of Corfu’s...
EXPLORE ALL

#discovergreece
See the gallery
Make sure you bring your appetite, when you step into a traditional tavern in Corfu island
Corfu Old town from above
Koulouri bay
Afiones village in Corfu
Vlacherna monastery and Pontikonisi in Corfu
Corfu Old Town is a UNESCO heritage site
Painted pots – some filled with water for extra acoustics – are thrown with aplomb from balconies
La Grotta beach in Paleokastritsa
Sunset in Mouragia district in Corfu town
Fireworks at Easter celebration over the Old Fortress
Spianada square and Liston from above
Rovinia beach in Corfu
Mpourdedo traditional corfiot dish
Enjoying the sunset
Aerial view of Porto Timoni beach
Corfu town, especially for its oldest part, is one of the most charming and romantic places of all the Greece
The clock tower
BEST OF
8 top things to do in Corfu
With so many unforgettable things to do in Corfu, one visit is never enough. But there are some highlights you simply can’t afford to miss
Discover It 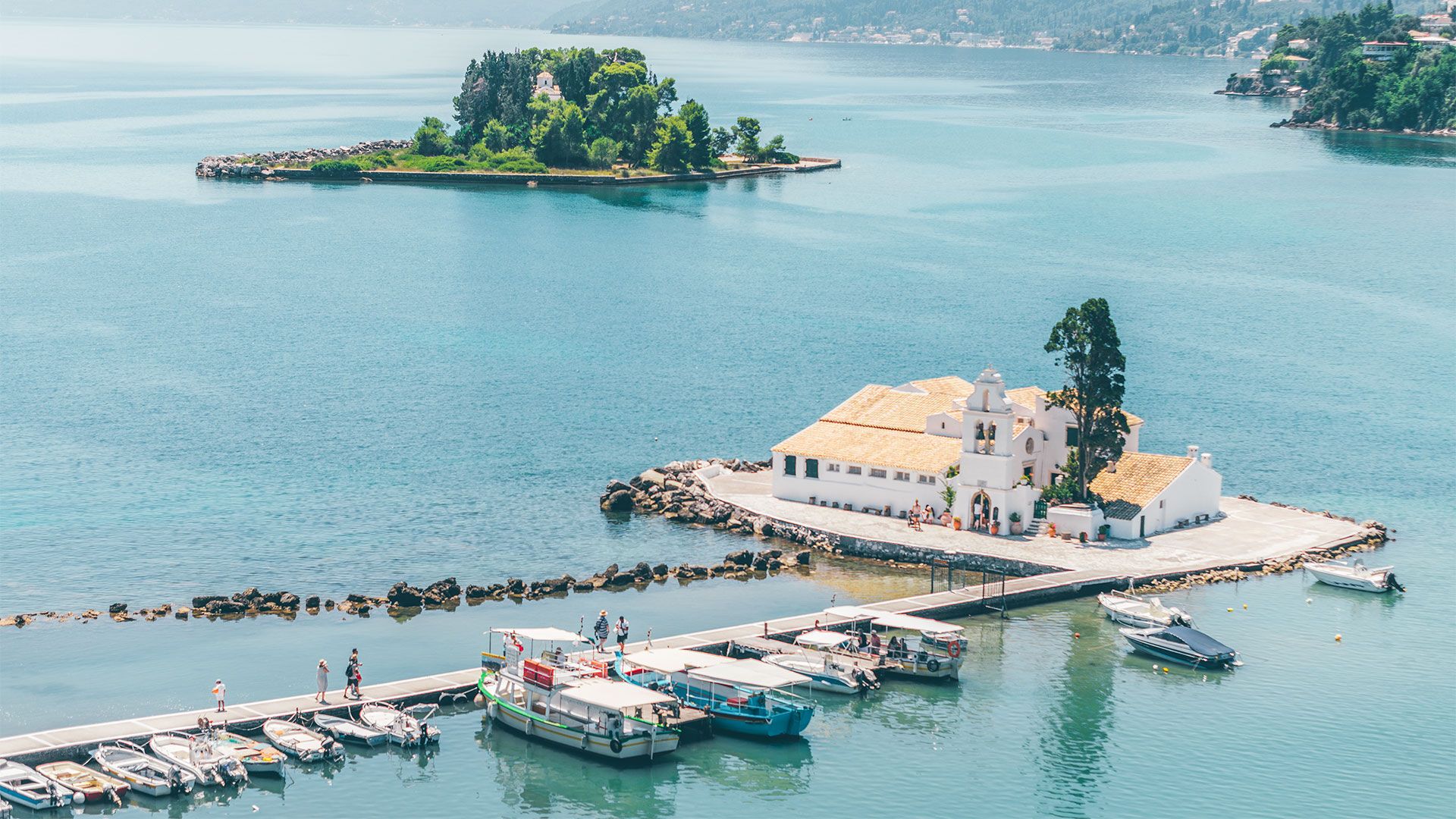 COVER STORY
The most Instagrammable spots on Corfu
Those colours, those buildings, that sea… and, above all, that incredible light. There’s so much about Corfu that simply has to be shared.
Discover It 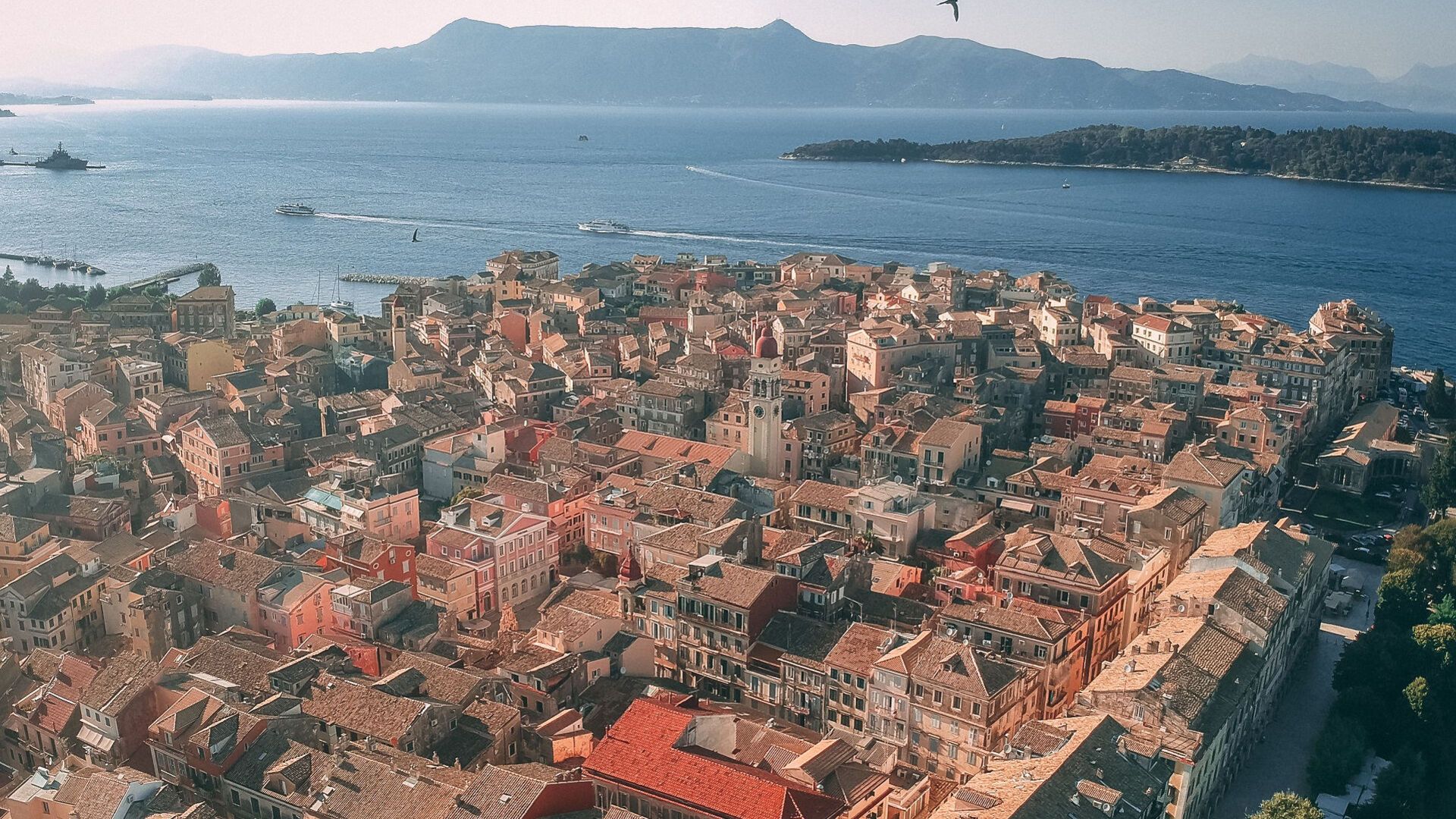 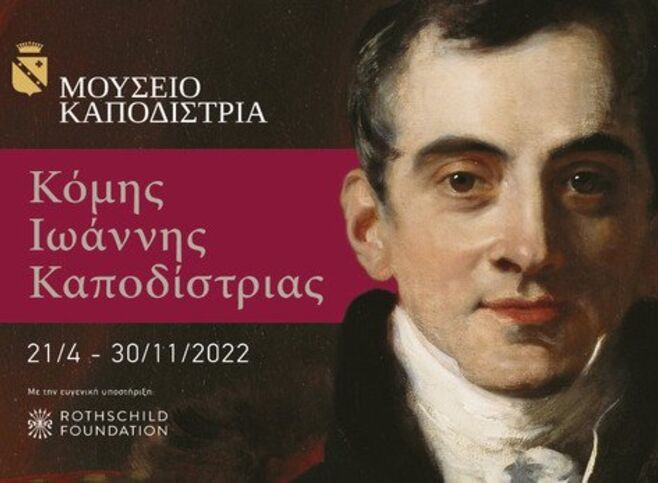 Exhibition of the facsimile of John, Count Capo d’Istria