The Greek islands: a reality near and dear to Greeks, a dream destination to others. It isn’t a coincidence that they have a special place in people’s hearts;  each island, a small paradise, with its own colour, charm and personality, all together like jewels scattered across the green-blue Greek seas. Get to know as many as you can while taking in the comforts only a cruise ship can provide.

Cruising around the Greek islands is in itself a unique experience, one that you’ll want to relive again and again, whichever route you choose. Whether your journey leads you to the cosmopolitan and popular islands, or to remote islands where you’ll travel back in time; whether in the Aegean or the Ionian, each one will enchant you with its authenticity. A cruise is an ideal way for you to get to know Greece and is a perfect fit with the country’s island lifestyle. It will give you an unforgettable experience of freedom, carefree luxury as well as the opportunity to see more than one destination, which aren’t limited only to the Greek archipelago but also includes visits to significant monuments and landmarks on the mainland.

For example, you’ll take short trips to majestic sites such as Ancient Olympia, the birthplace of the Olympic Games with its ancient stadium and archaeological museum, near the port of Katakolo in the Peloponnese. On your cruise in Greece, you’ll get to know popular island destinations, such as Mykonos, Santorini, Patmos, Rhodes, Crete, Kefalonia and Corfu, combined with the luxury of staying on board. Finally, you’ll also discover the surprises that each port offers, such as in Athens, Nafplio, Monemvasia and many more.

Get information on the ports where the ships depart (Piraeus, Lavrio, Heraklion, Rhodes and Mykonos), the routes that fulfil your desires, the destinations not to miss and start organising your own cruise around the Greek islands.

1. Mykonos: Wander through cosmopolitan Mykonos with its labyrinthine cobblestone streets, windmills, famous Little Venice and sophisticated Matogiannia Street. Spoil yourself with designer clothing and jewellery, tantalize your palate at some of the most exclusive restaurants, saunter slowly by old churches and traditional houses and greet the much-photographed pelican, who has become quite the celebrity in his own right.

Just a few minutes outside of town, you’ll find the monastery of Panagia Tourliani in Ano Mera, dating back to the 16th century. 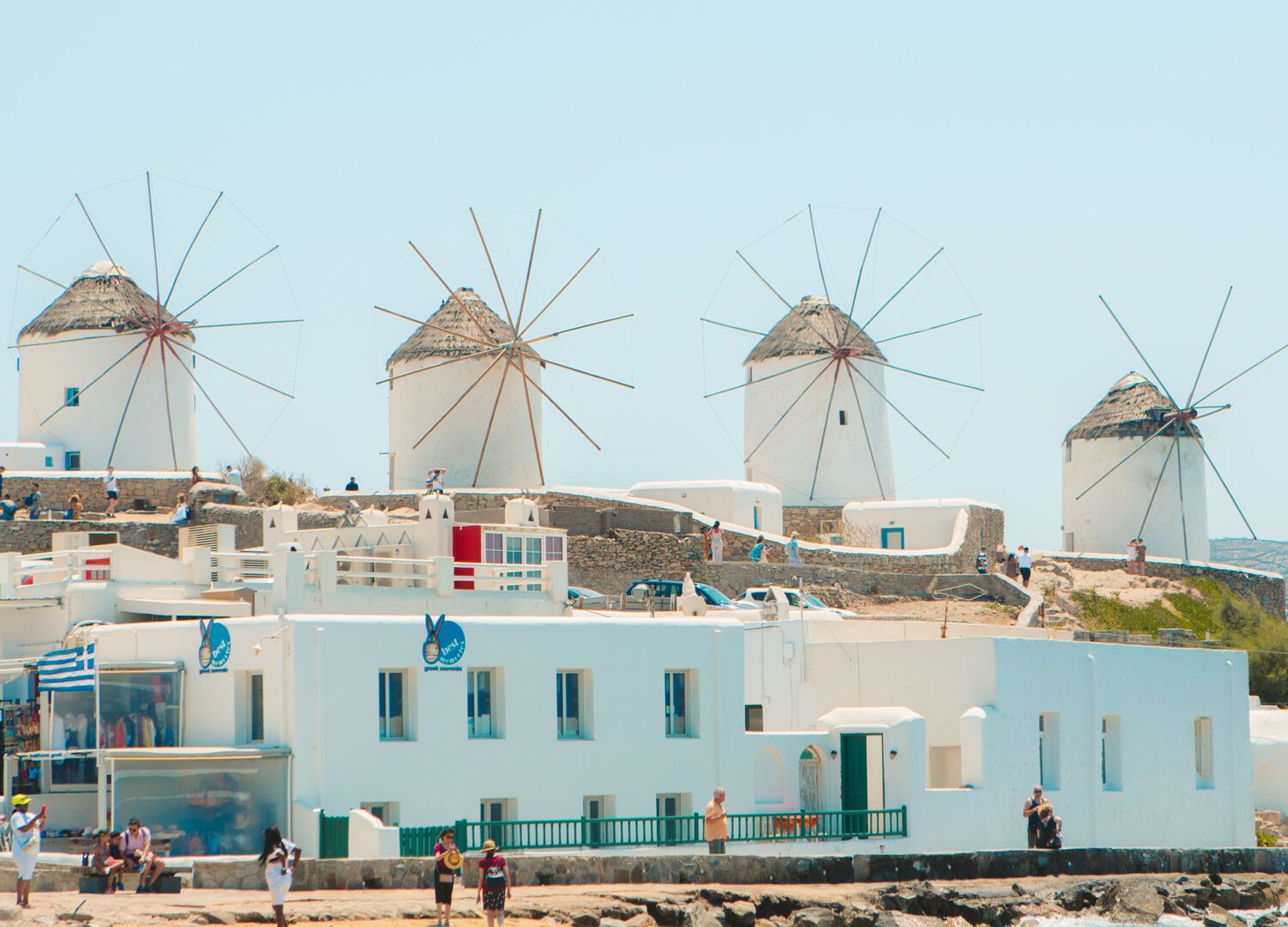 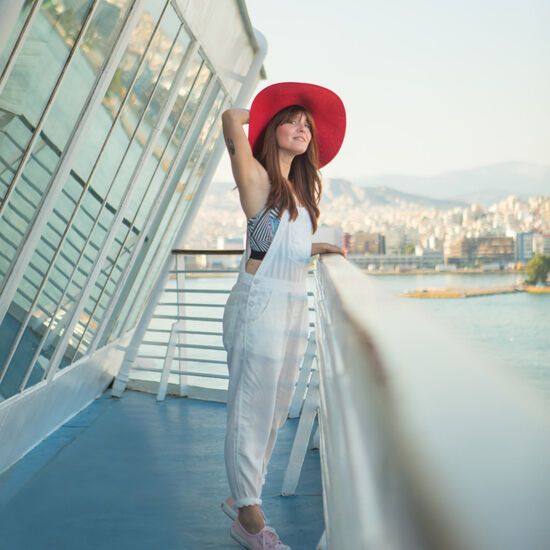 2. Santorini: As the ship slowly enters the caldera of Santorini, you’ll experience one of the most impressive sights of your life – steep volcanic rocks, villages so high they almost pierce the clouds, whitewashed houses and churches teetering on the cliffs. On the other side of the island lies Thirasia, Palia and Nea Kameni – a group of islands formed by the eruption of the volcano. You’ll disembark at Yialos, the old port right below the town of Fira. By boat, you can visit Nea Kameni and then dive into the healing waters of Palia Kameni.

You can also take the cable car up to Fira and then sit back and enjoy the view. Fira boasts some of the most important museums on the island, such as the Prehistoric Thera and the Archaeological Museum. Take a walk through the famous Gold Street and shower yourself with jewellery, stroll through the galleries, clothing stores and charming cafes. And don’t forget to take time for the beautiful town of Oia, the most cosmopolitan village in Santorini with its world-famous sunset views.

3. Patmos: Embrace the majestic ambience of Hora and the Holy Monastery as you arrive on the island of Patmos. Mystical experiences await you here;  in the dark cave where St John the Divine wrote the Book of Revelation and the impressive Monastery of St John the Theologian (home to more than 900 years of monastic life). Discover an island-monument that Unesco has declared a World Heritage Site.

The Cave of the Apocalypse can be found along the route from the harbour towards Hora. Make your way to the cosmopolitan town and wander around the spectacular mansions, elegant shops, cafes, restaurants and museums. 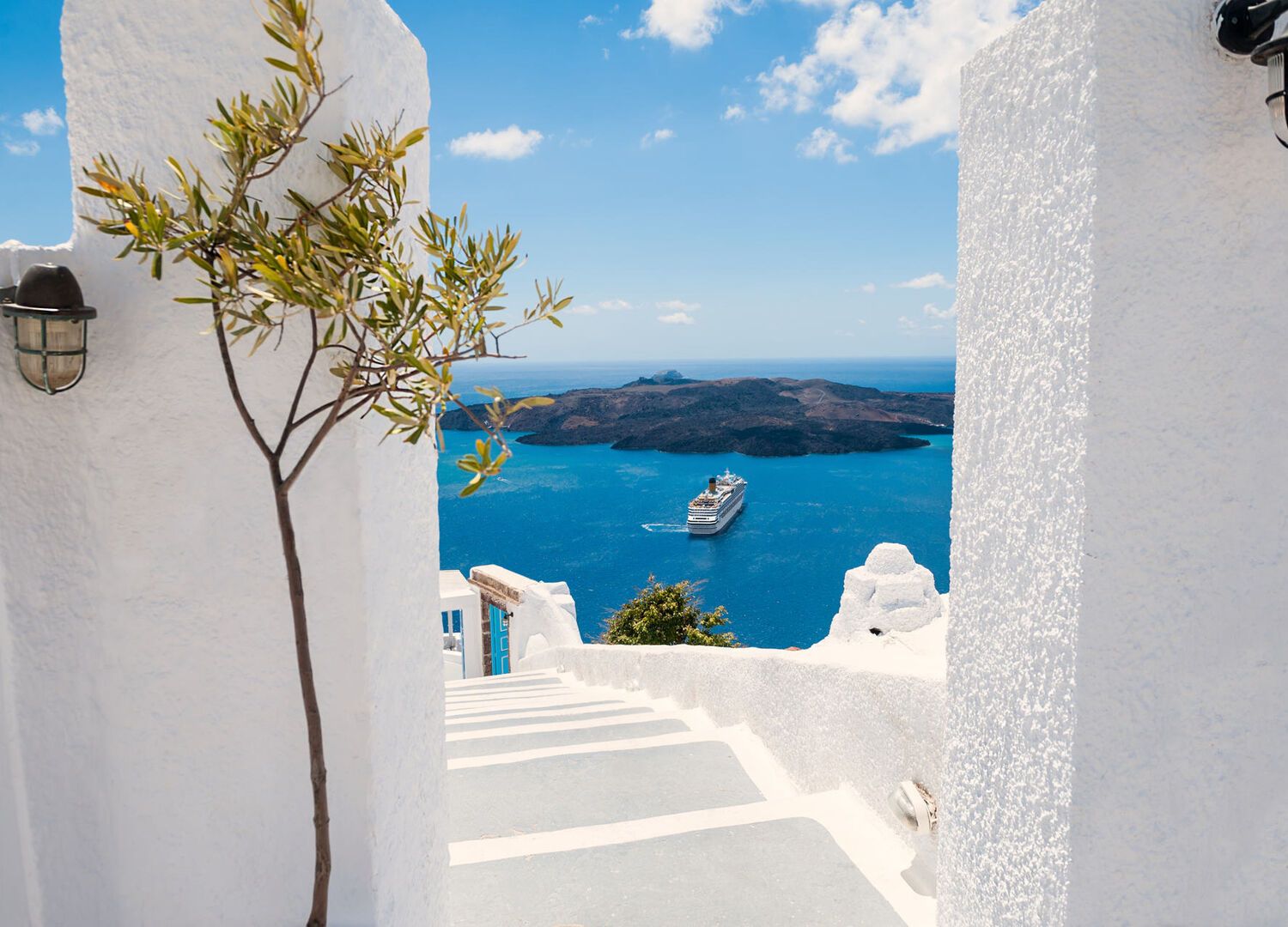 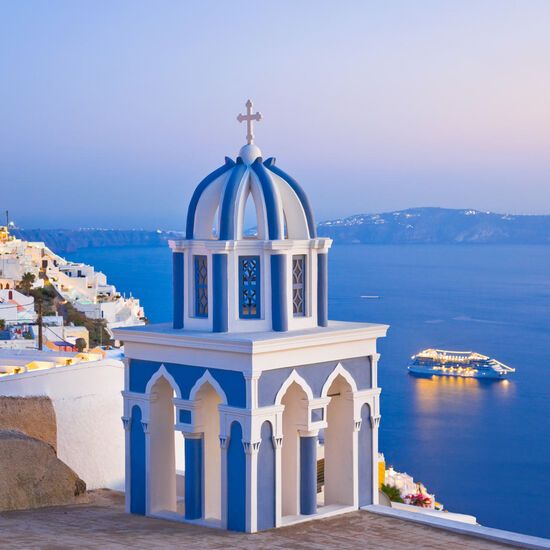 4. Rhodes: This has been a favourite destination of international jet setters and locals alike since Roman times. One of the best-preserved mediaeval settlements in the world, Rhodes’ Old Town has been declared a Unesco World Heritage Site. Protected inside its imposing wall – a boundary between past and present – is the island’s coat of arms. Wander through a maze of narrow streets with noble buildings from the 15th and 16th centuries, mediaeval churches and Ottoman mosques. You’ll visit the Street of the Knights, the Palace of the Grand Masters, Hippocrates Square filled with cafes, stately buildings and the Symi Museum.

You’ll constantly stumble upon shops, cafes and restaurants. Take a ride to Mandraki, with its impressive buildings such as Government House (which looks like the Doge’s Palace in Venice), City Hall, the National Theatre, the small fort of Agios Nikolaos, the famous hotel Grande Albergo delle Rose, the citadel of Rhodes (Monte Smith) and Rodini Park. Your cruise ship will then pass by beautiful Symi, whose Hora is a perfect neoclassical miniature.

5. Kos: At the entrance of the harbour, the dignified Castle of the Knights of St John awaits your arrival. Redesigned by the Italians after 1933, the city of Kos has a multitude of large squares, sidewalks, modern buildings, plazas, shops, cafes and restaurants.

A highlight near the city is the archaeological site of Asclepion, where the demi-god taught Hippocrates, the founder of modern medicine.

6. Heraklion, Crete: Heraklion is a multifaceted seaside city with the Venetian harbour and the Koules fortress gazing proudly out to sea. A modern urban capital, it’s brimming with culture, luxurious accommodation and many dining and entertainment options. You’ll stroll through the harbour and the city centre with its lovely walkways lined with Venetian buildings and shops.

Visit the Archaeological Museum of Heraklion, the Museum of Natural History and the Historical Museum. Take time to visit the Palace of Knossos and continue on to the village of Archanes with its old homes restored to their former glory, then head to the small palace of Vathipetro and the wineries in the village of Prose.

7. Corfu: In aristocratic Corfu, you’ll tour palaces, majestic fortresses, and romantic alleyways. You’ll learn all about the island’s rich, royal history. The sights are magnificent. You’ll admire the iconic palaces of the city, the Liston Arcade, and Spianada – the largest square in the Balkans. 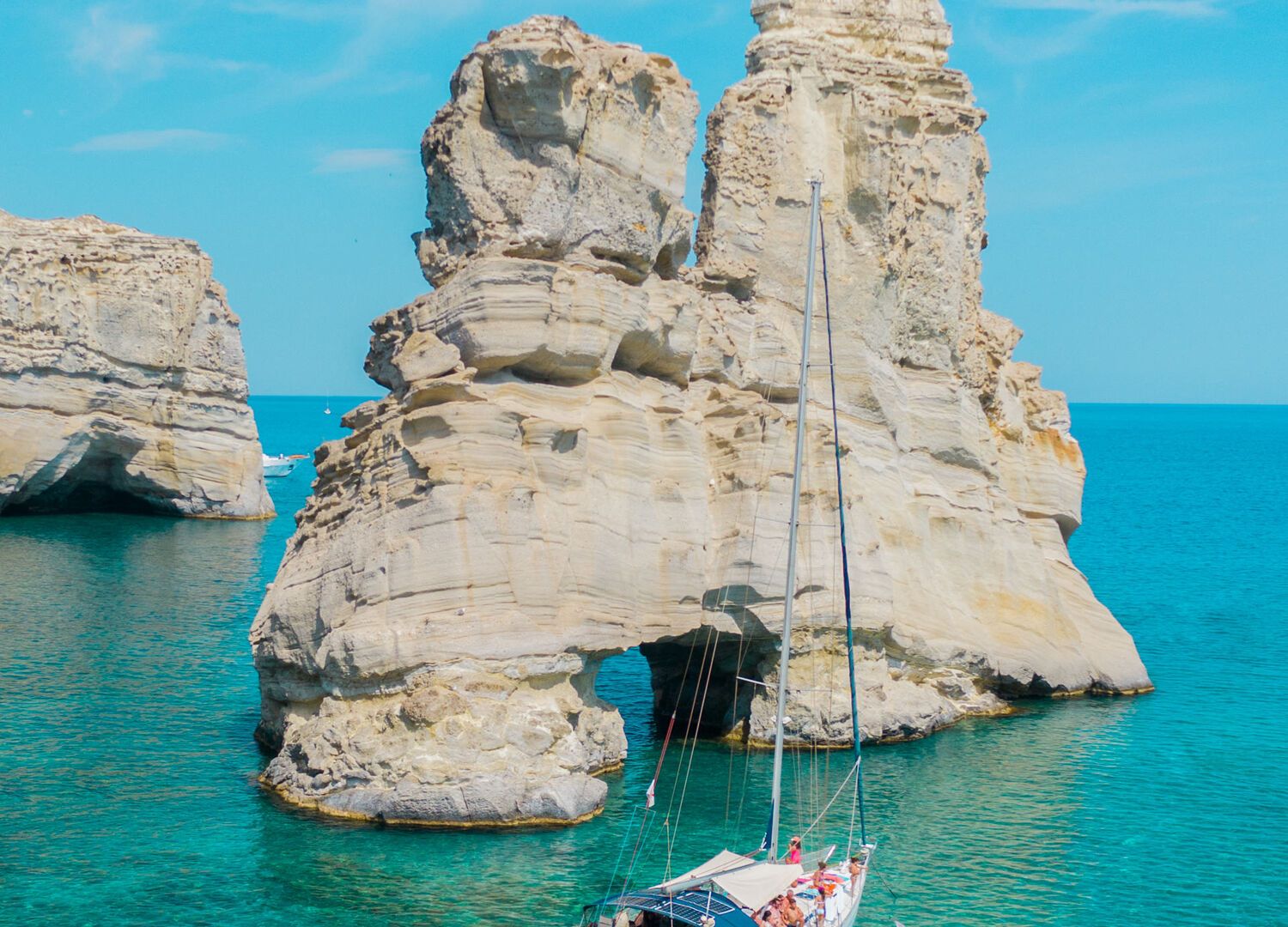 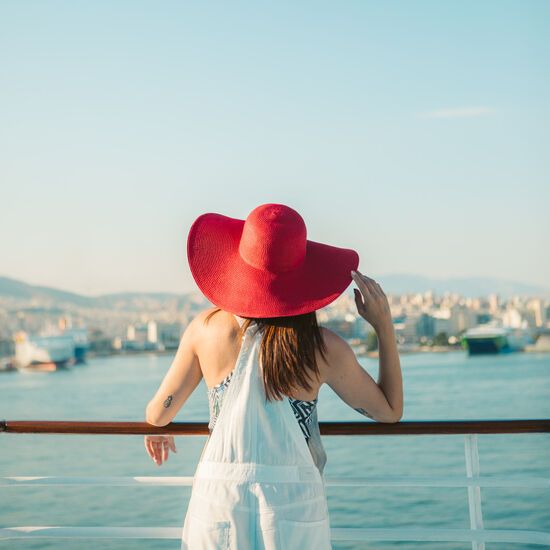 8. Attica: Your cruise ship docked at the port of Piraeus, the sightseeing has just begun. The Acropolis and the world-renowned New Acropolis Museum are a mustsee in Athens. You’ll continue to navigate your way to the marble Panathenaic Stadium, the Hellenic Parliament building and the neighbourhoods of Plaka and Monastiraki under the Acropolis with their picturesque markets. There are countless options for relaxation, entertainment and tours. Everywhere you turn you’ll find charming cafes, designer stores, galleries, museums, restaurants and more.