From Venetian fortresses and British mansions to stately palaces and French esplanades, a walking tour around the Old Town of Corfu is like exploring an open-air museum 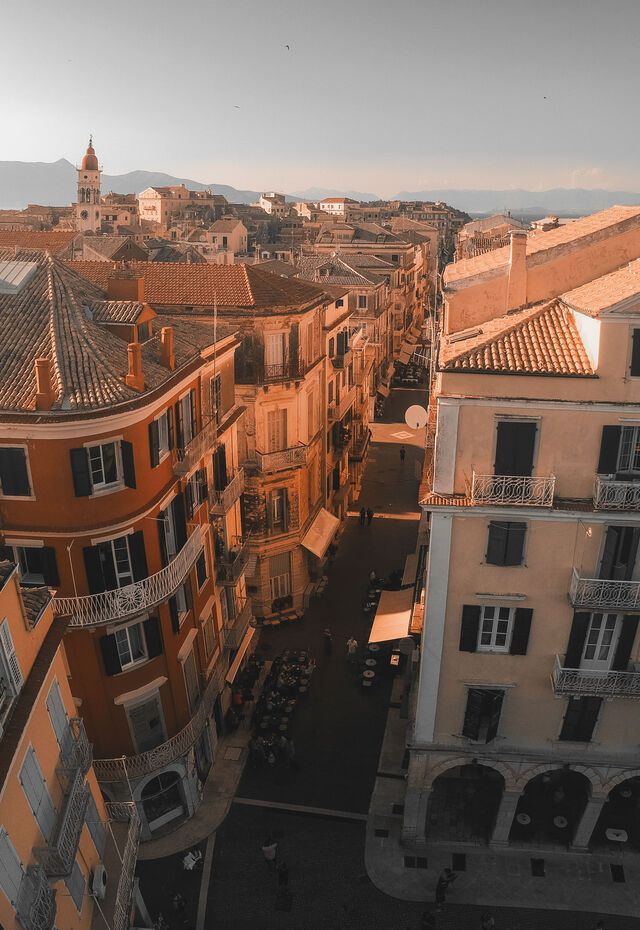 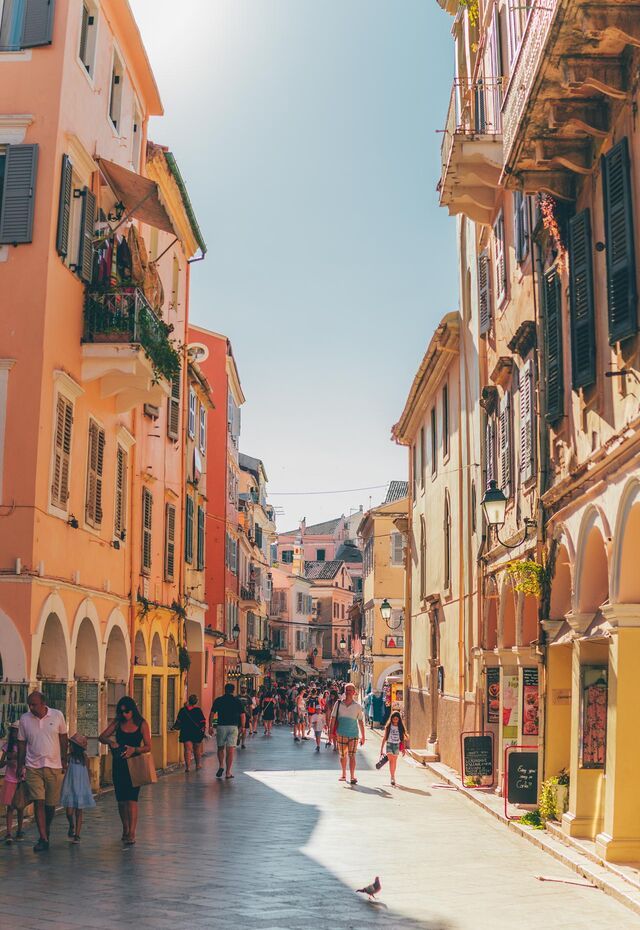 The Byzantines, Venetians, French and British all ruled over Corfu, giving this stellar island in the Ionian Sea a unique history that can be felt everywhere in the Old Town which has, in its entirety, been declared a UNESCO World Heritage Site.

You can see it in the architecture of the buildings located between the Old and New Venetian Fortresses and feel it as you explore the pedestrianised little roads called cantounia, as they wind their way through the town and lead to churches, palaces, art galleries and squares. And you can hear it in the music for which Corfu is famed and the banter of locals going about their daily lives.

There is an authenticity and romance to Corfu's Old Town that will leave you completely charmed. 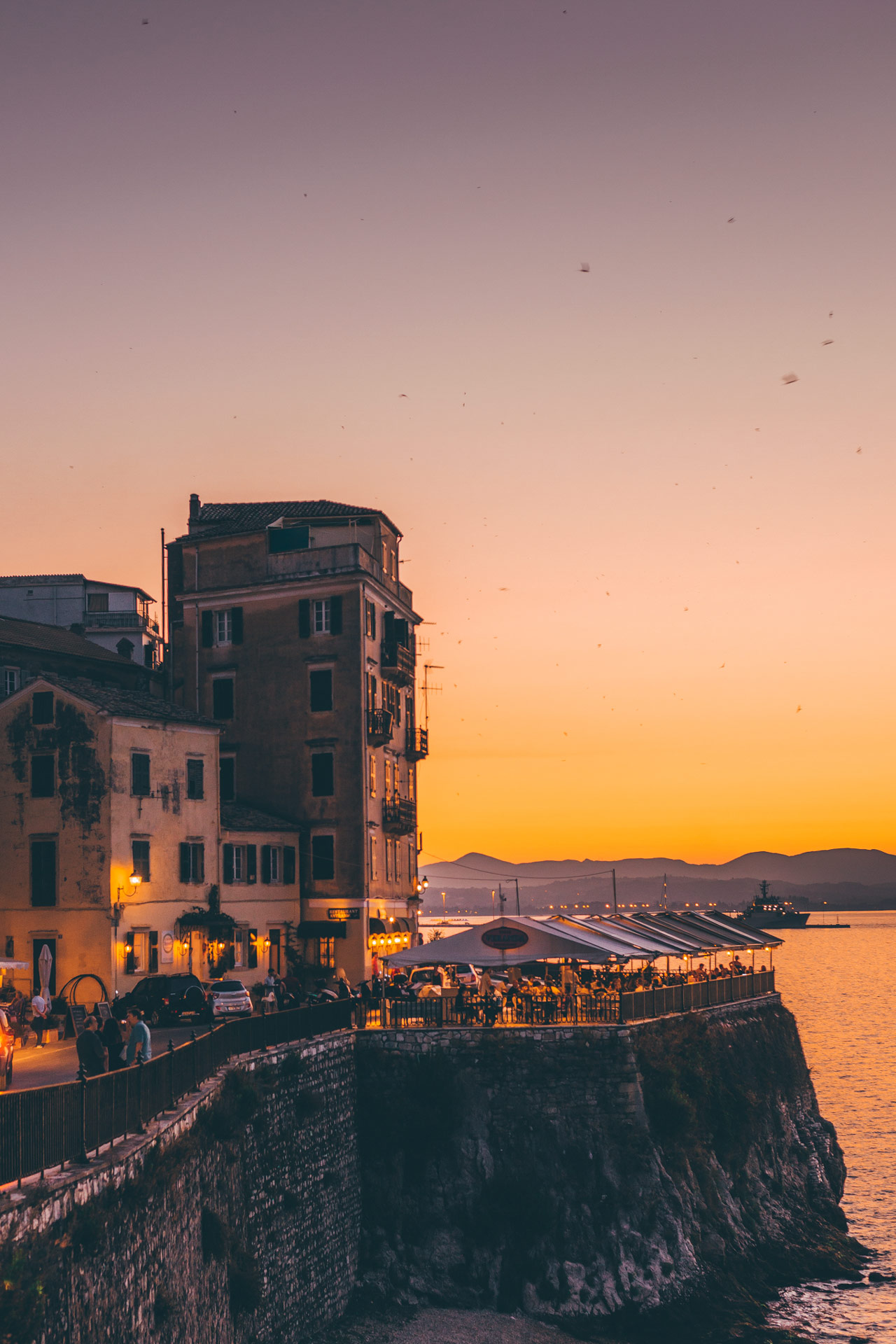 Corfu is a city with old tall buildings, separated by slopes and narrow streets which are called Kantounia 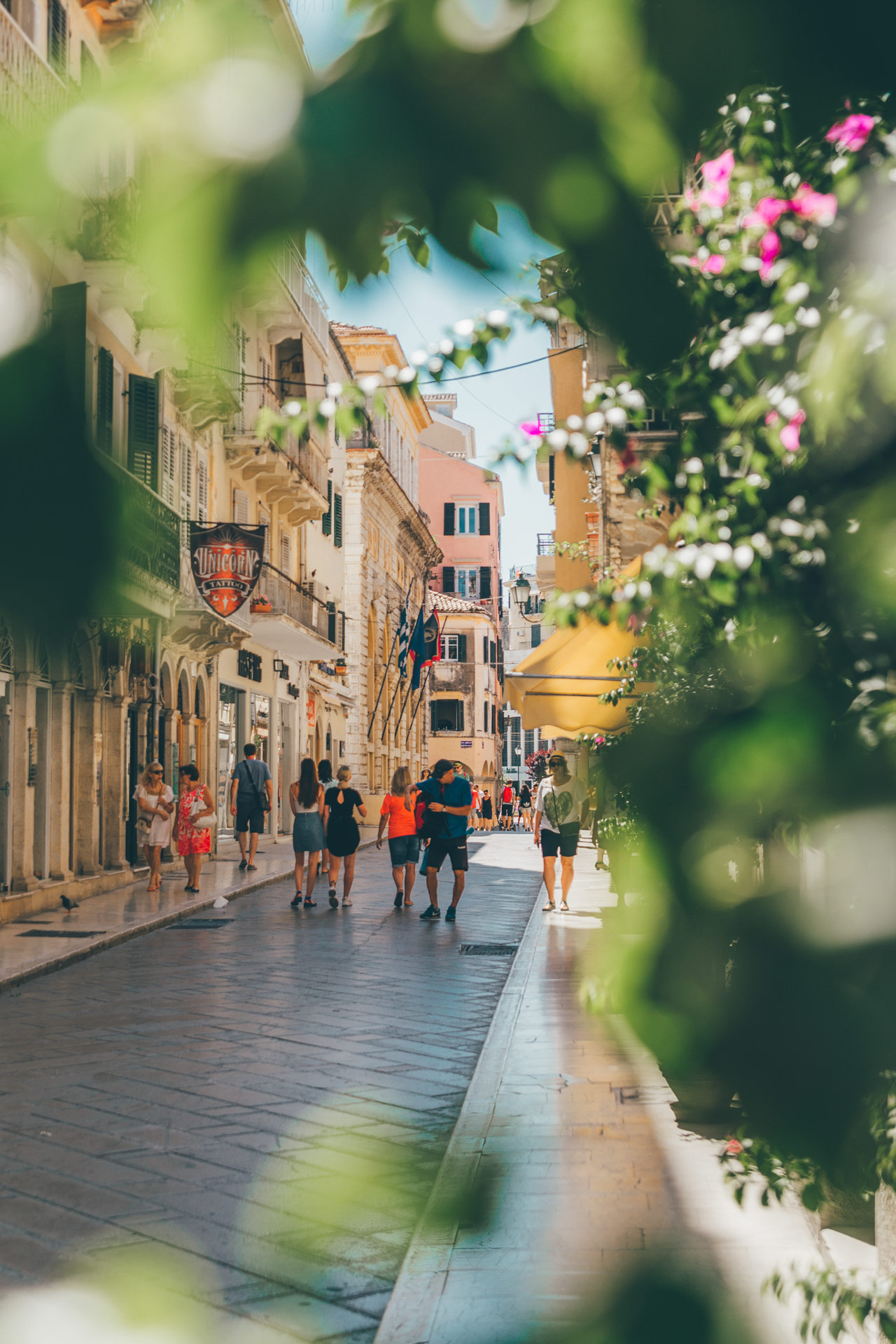 Corfu town, especially for its oldest part, is one of the most charming and romantic places of all the Greece 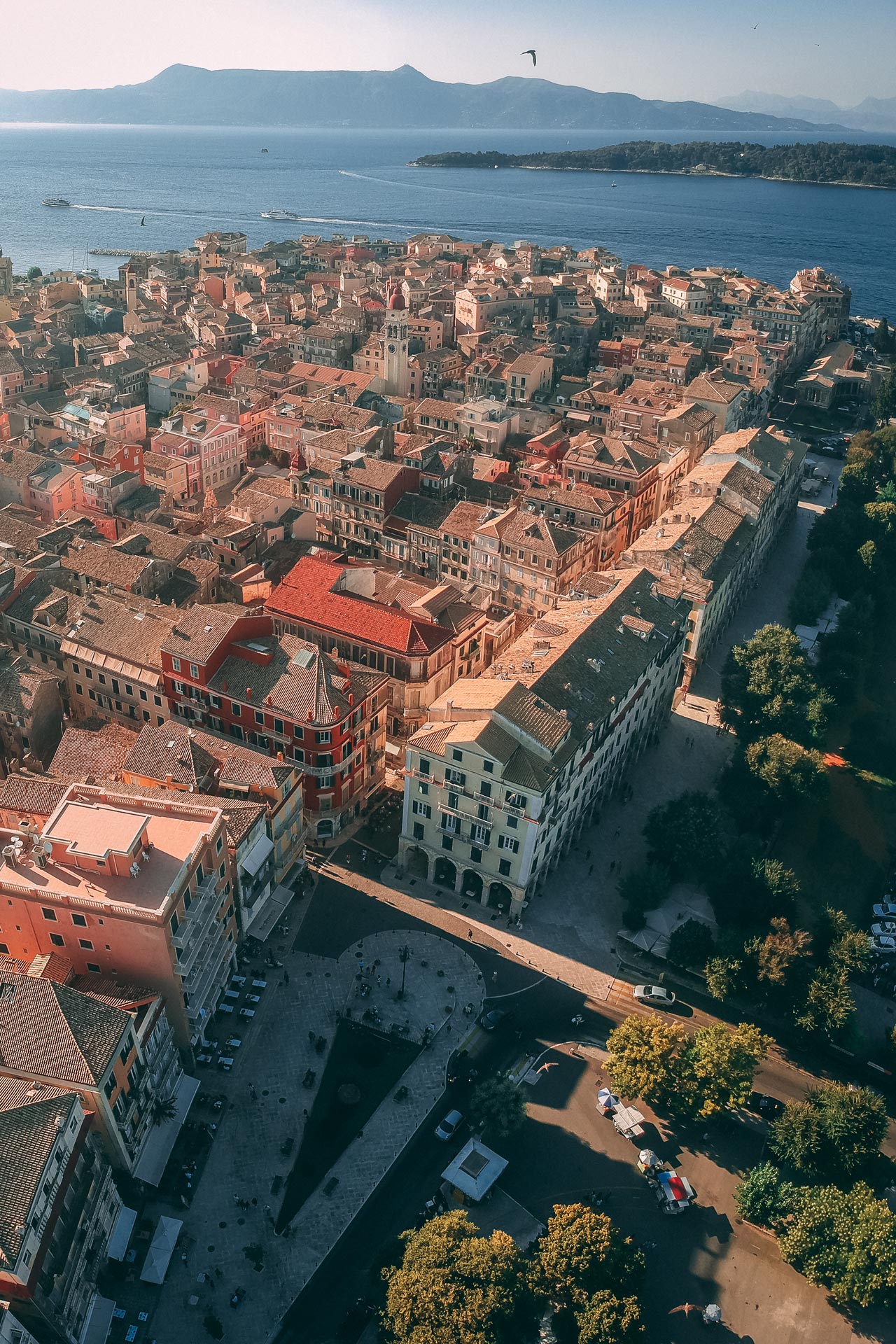 From Venetian fortresses and British mansions, to stately palaces and French esplanades 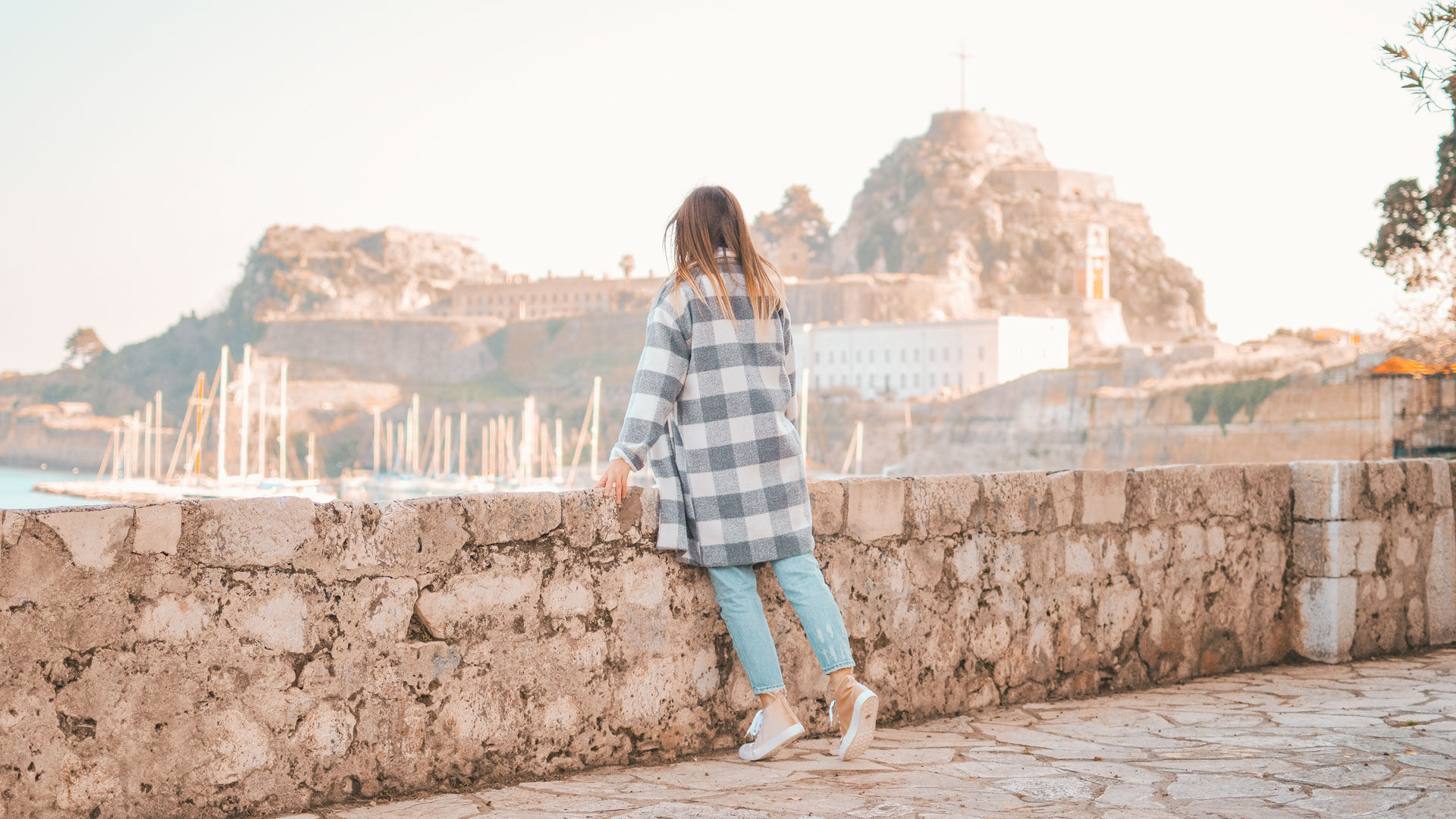 Next to the Old Fortress are the Garden of the People, perfect for a beautiful stroll with views of the fortress
Tamara Bellis 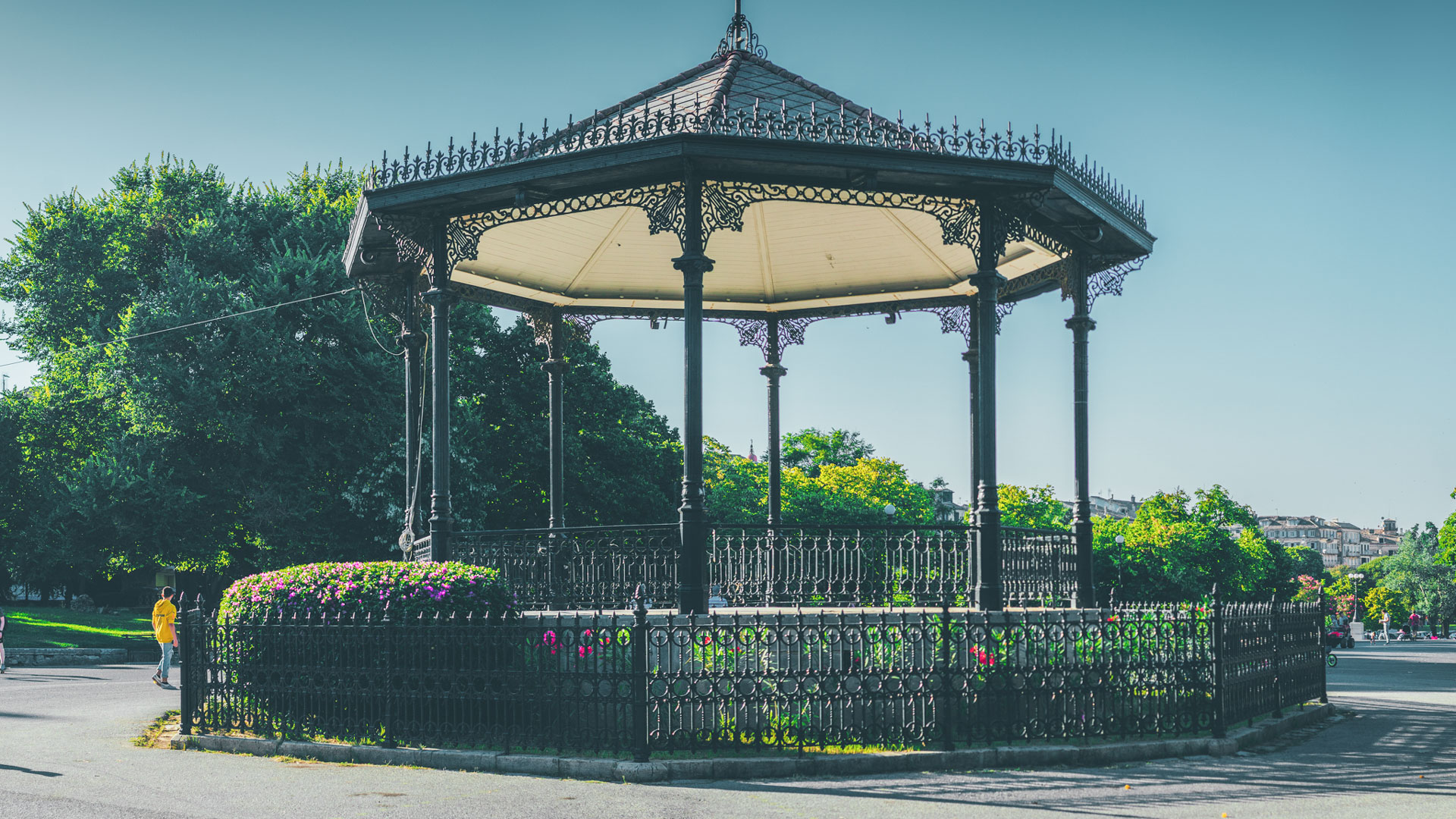 Spianada Square where concerts are played 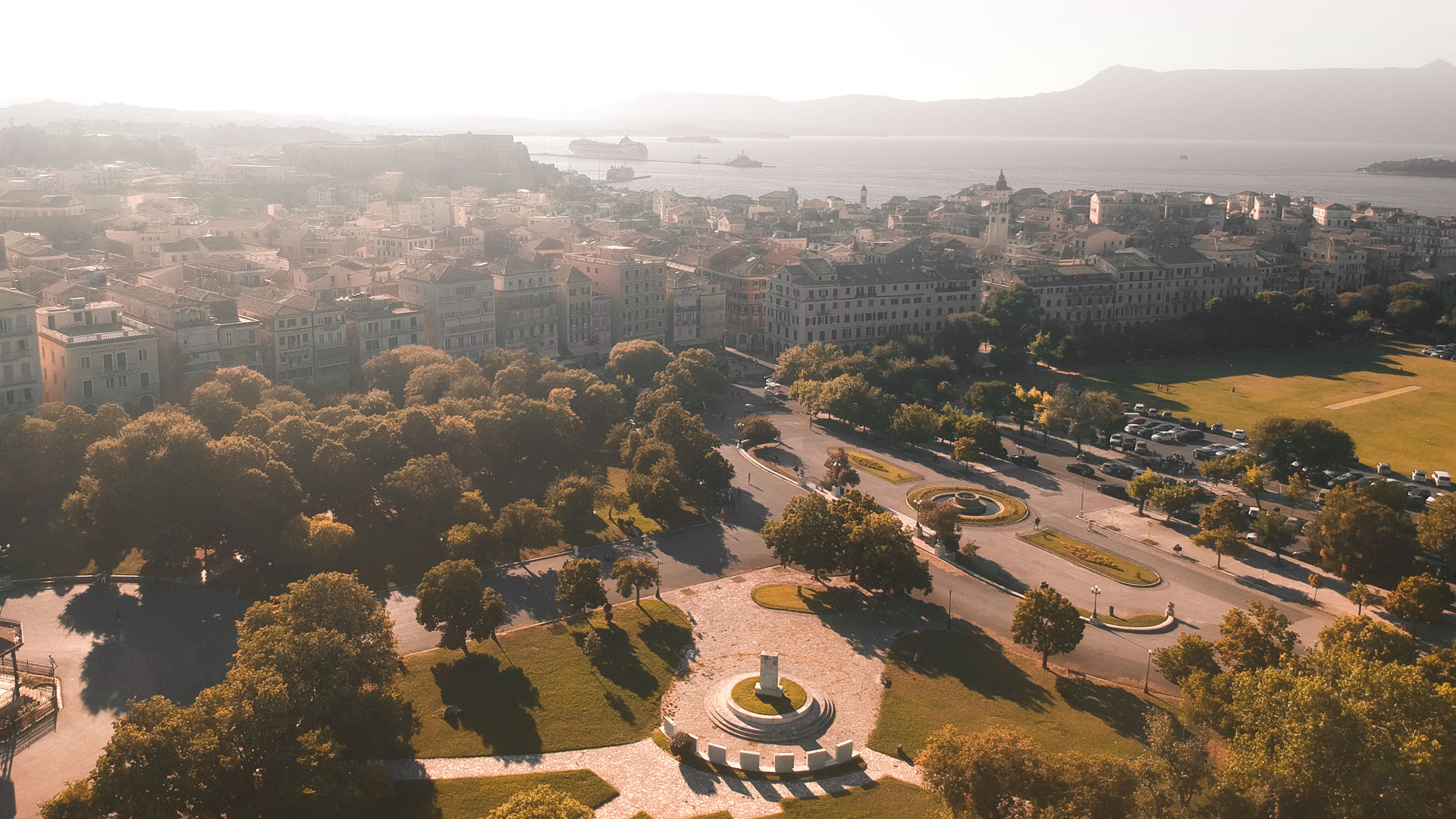 Take a moment to walk through the grass-filled Spianada, with its fountain and cafe and open areas 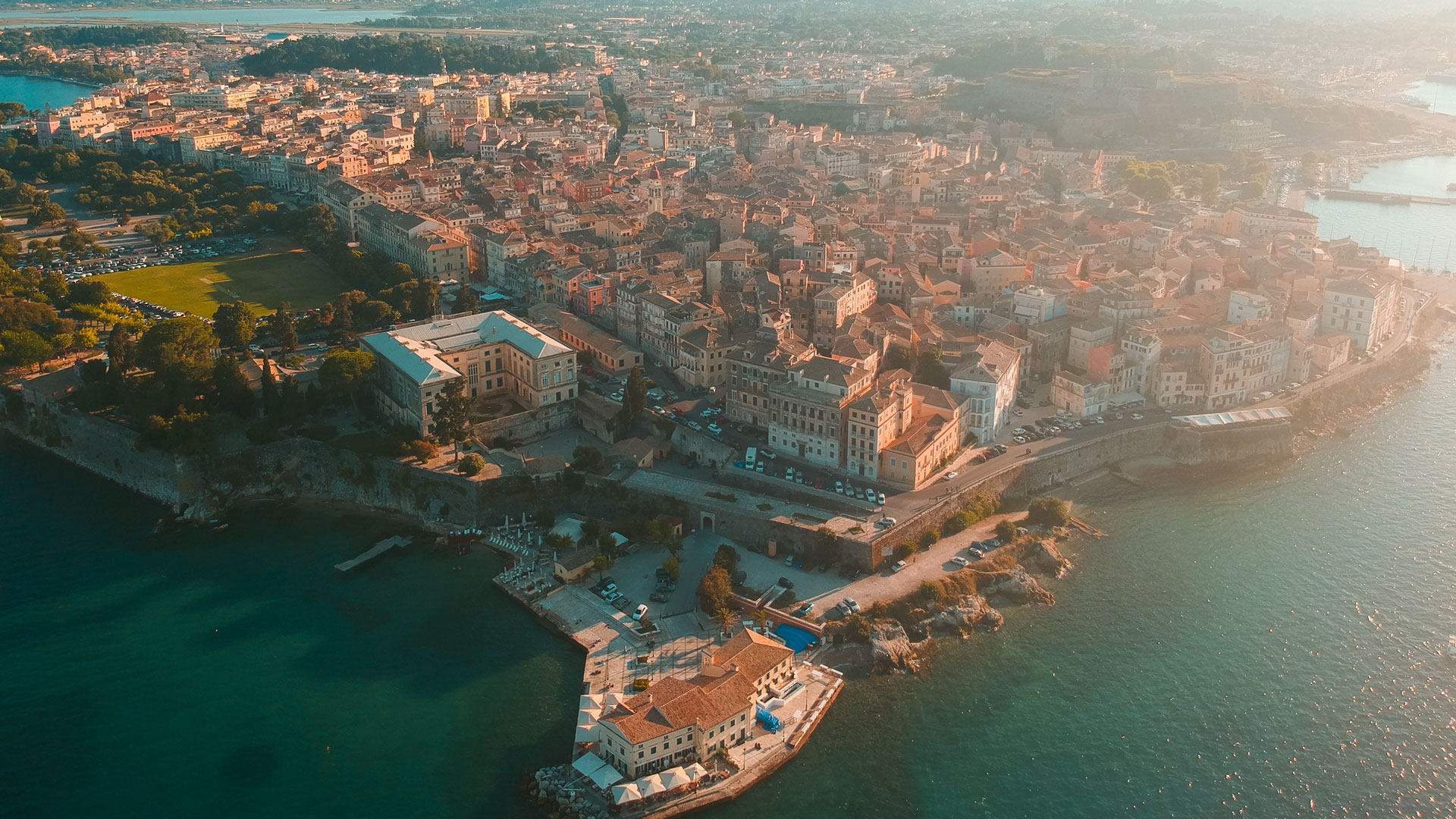 The entire Old Town is a UNESCO World Heritage Site 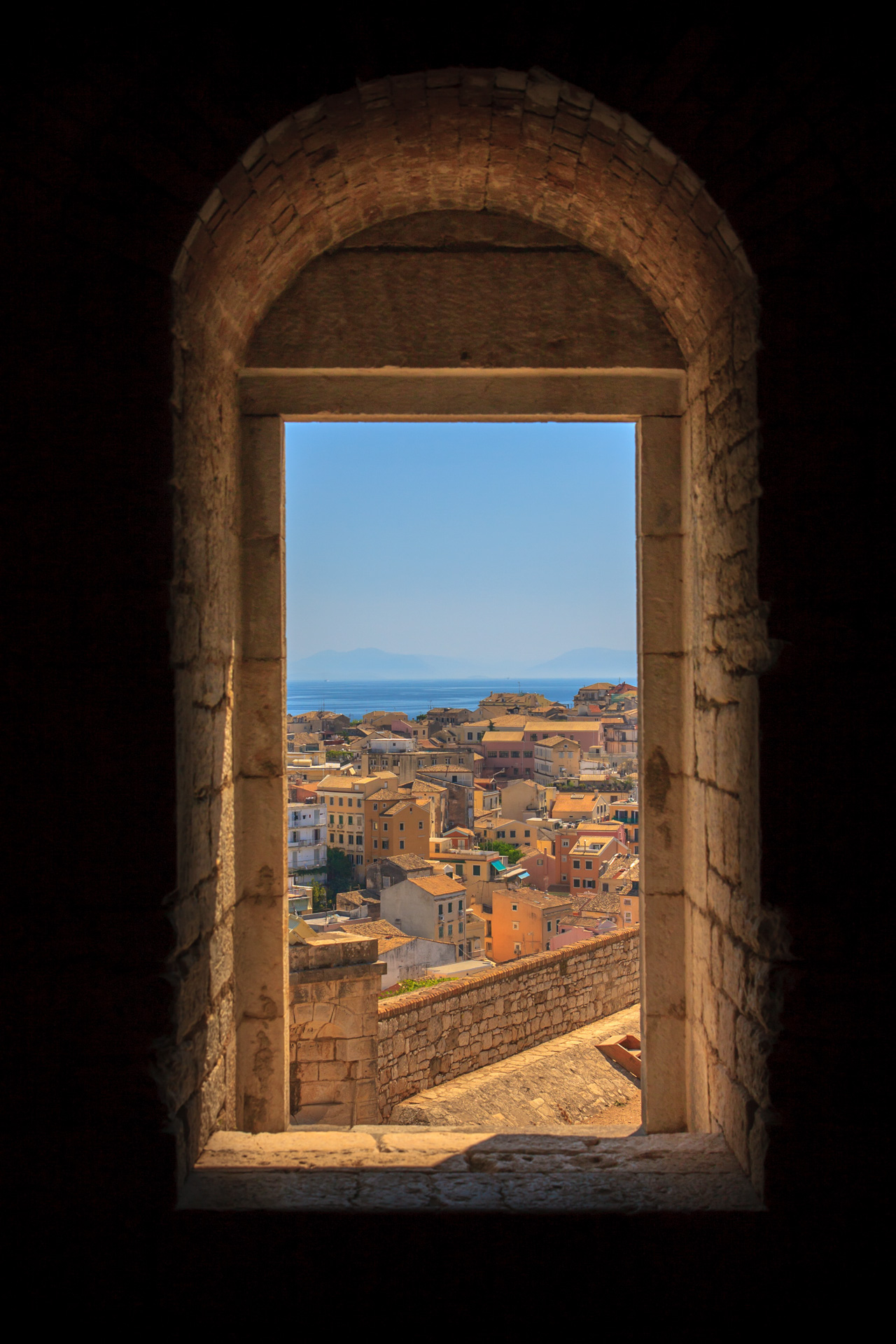 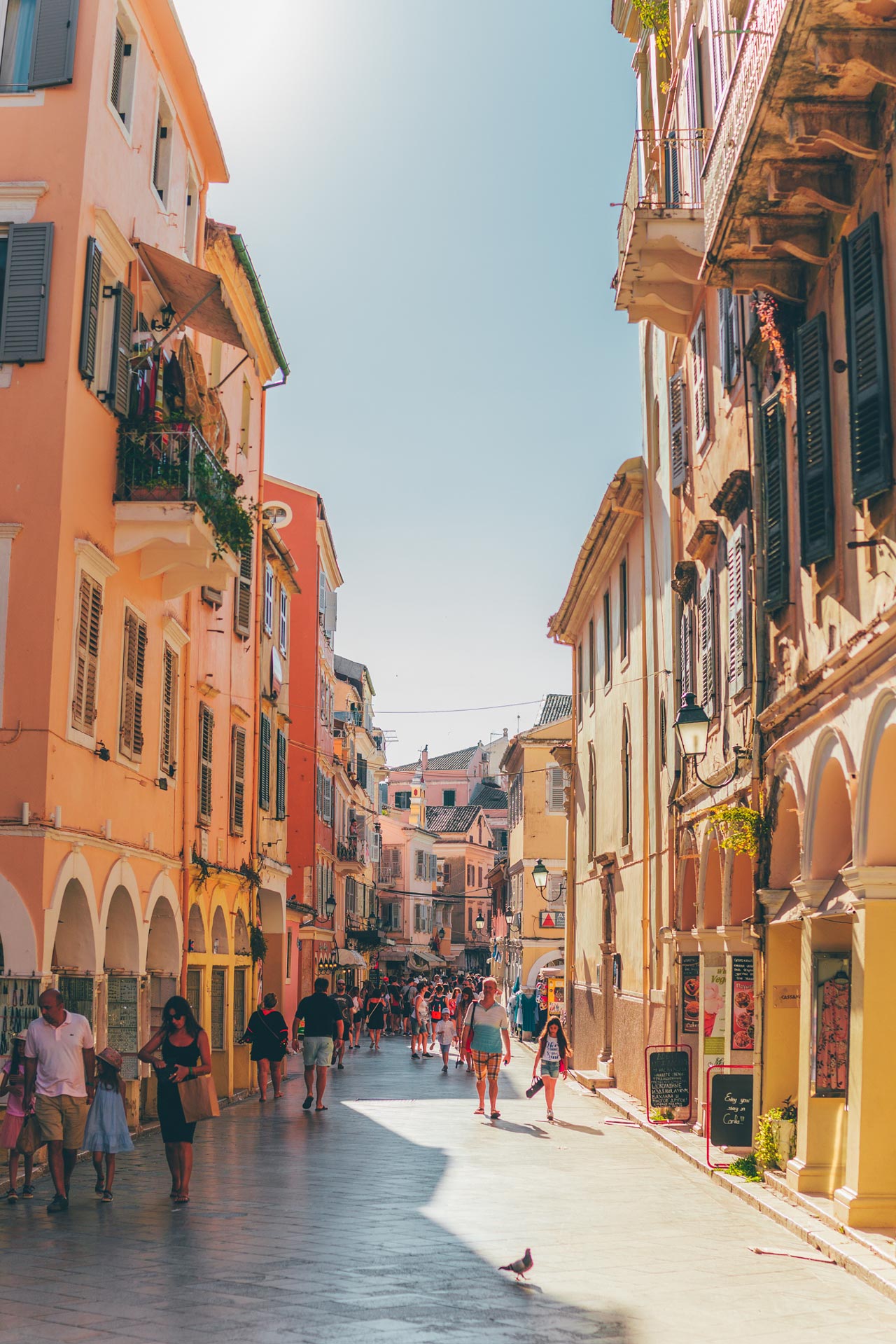 Walking in the old town of Corfu you can admire different buildings interesting from an historical, cultural and architectural point of view 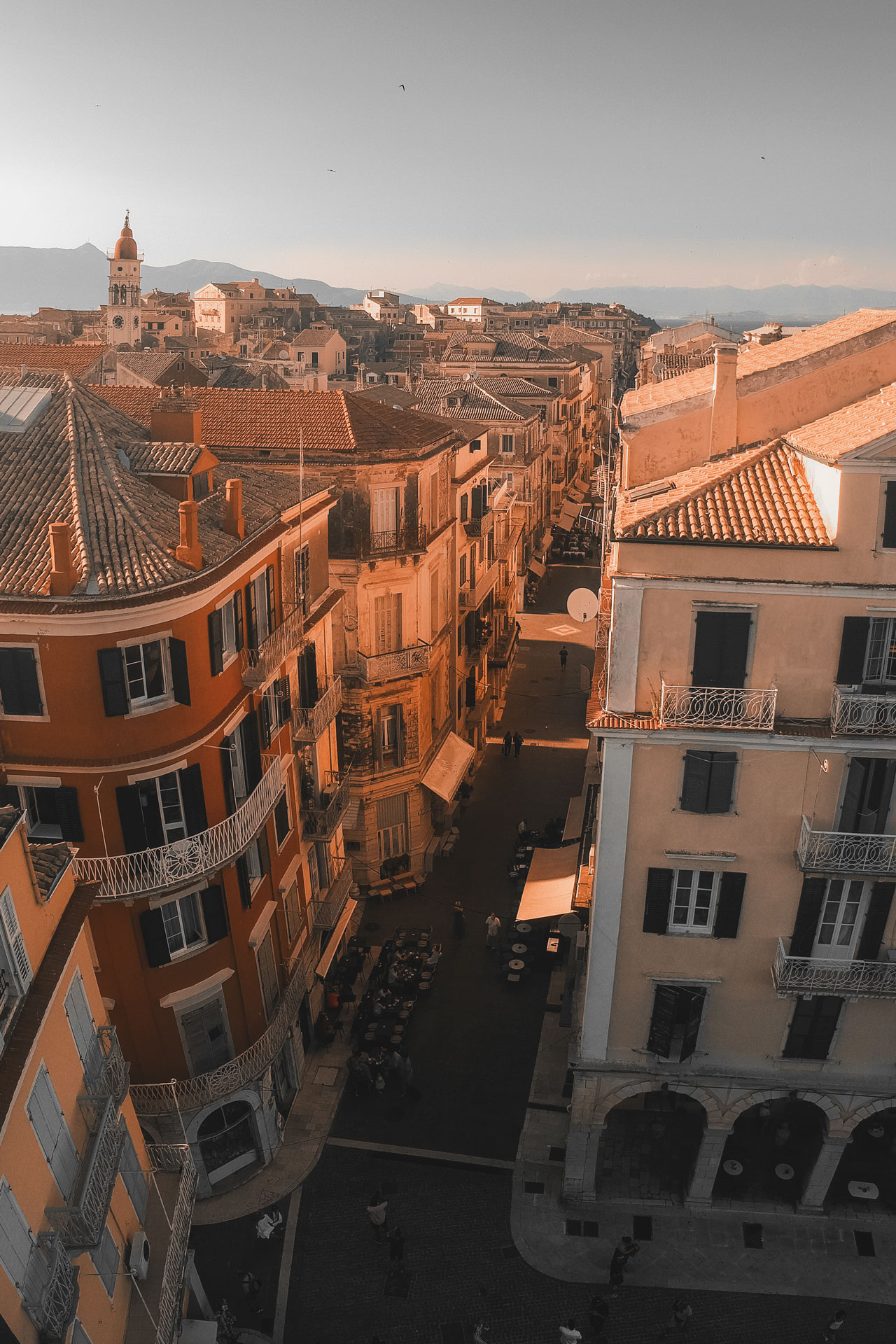 You can mix and match attractions in Corfu’s Old Town according to your interests and time, but a walking tour covering the highlights would include:

We start at the Ionian Parliament, on Moustoxides Street (the widest of the Old Town’s cantounia), where representatives of the region voted for the unification of the Ionian Islands with the rest of Greece in the 19th century. Before that, Corfu had been a protectorate of Britain for almost 50 years.

Turn left into Guildford Street (named after the British philhellene who, amongst other things, re-established the Ionian Academy). You’ll reach a square housing the Town Hall, formerly a club for noblemen and the Theatre of St Giacomo. You’ll also find the 16th-century Catholic Cathedral of San Giacomo. The square and surrounding roads are a hub for cafeterias and restaurants, with great shopping and nightlife.

Heading up to Nikiforou Theotoki Street, you find the Casa Parlante, a 19th-century mansion that’s now a museum recreating the life of a nobleman during this golden period in Corfu’s history.

Around the block is Agios Spyridon, a 15th-century church with an impressive bell tower. It houses relics of the island’s patron saint, Spyridon, who is said to have expelled the plague from the island. The relics form part of a procession every Palm Sunday. Leave by the exit that takes you into the Agios Spyridonas cantouni, with its souvenirs and local products.

The road you are on ends at Liston, part of the Spianada, the Old Town’s main square. With its 19th-century colonnade modelled on Paris’ Rue de Rivoli, Liston is catwalk territory, perfect for an espresso and pose. But take a moment to walk through the grass-filled Spianada, with its fountain and café and open areas (where concerts and even cricket matches are played).

Built on a hill marking the eastern end of the city, the Old Fortress was started by the Byzantines and finished by the Venetians, when it was turned into an island. Walk over the canal, through the gates and on towards the Church of St George. Now climb to the cross at the top of the fortress and enjoy the panoramic views. There’s a public library, a Byzantine collection and a café within the grounds, as well as a small marina.

Boschetto Gardens & Garden of the People

Next to the Old Fortress are the Boschetto Gardens, perfect for a stroll with views of the fortress. If you want the greenery to continue, head to the Garden of the People, part of the Palace of St Michael & St George.

Originally the seat of the Order of Knights of Saint George and Saint Michael, this was once a British governor’s mansion and a summer residence for the Greek Royal Family. Today, it houses the Museum of Asian Art. The palace sits above the Faliraki district, with its tiny beach that’s perfect for a morning swim. It’s also a great spot for a summer evening cocktail with views of the lit-up Old Fortress.

Continue into Campiello, the oldest and most atmospheric quarter, with its labyrinth of narrow cantounia, carved wells, picturesque squares and tall buildings with balconies that are often decorated with bougades (pots) and ropes. Check out the Venetian Well opposite the Church of Panagia Kremasti and the Metropolitan Church.

Heading north, you’ll find a museum dedicated to Greece’s national poet, Dionysios Solomos, whose Hymn to Freedom was adapted into the Greek national anthem. The house in which he lived, wrote and died was destroyed during World War II but has been restored and converted into a museum.

From here, it’s a short walk west to the New Fortress (the Venetian’s 16th-century Fortezza Nuova), built on the hill of St Mark above the old port and once connected to the Old Fortress by a wall. The surrounding area is a lovely place to eat.

Returning to the coast road, head down Xenofontos and then Velissariou streets, which flank the Old Town’s western side, until you reach the Synagogue. Corfu’s Jewish community, which dates from the 12th century, was persecuted during the Nazi occupation but played an important part in the island’s cultral and daily life. The area has some excellent tavernas.

The walk ends at the church of at Agia Sophia at the bottom of Velissariou, from where you turn left into Evgeniou Voulgareos St and walk to the 14th-century Annunziata (you’ll know it from its bell tower). The Ionian Parliament and Spianada Square are just a few minutes away.

Where do walking tours of Corfu Old Town start from?

- You can begin your walking tour wherever you like, but if you do choose the Ionian Parliament you can easily reach it by car, taxi or foot, depending on where you’re staying in town.

How do you get around Corfu Old Town?

Corfu has a good bus network within the town and from around the island.
More info

When is the best time to visit the Old Town of Corfu?

When are the museums and attractions of Corfu Old Town open?

How long do you need to explore Corfu island’s Old town? 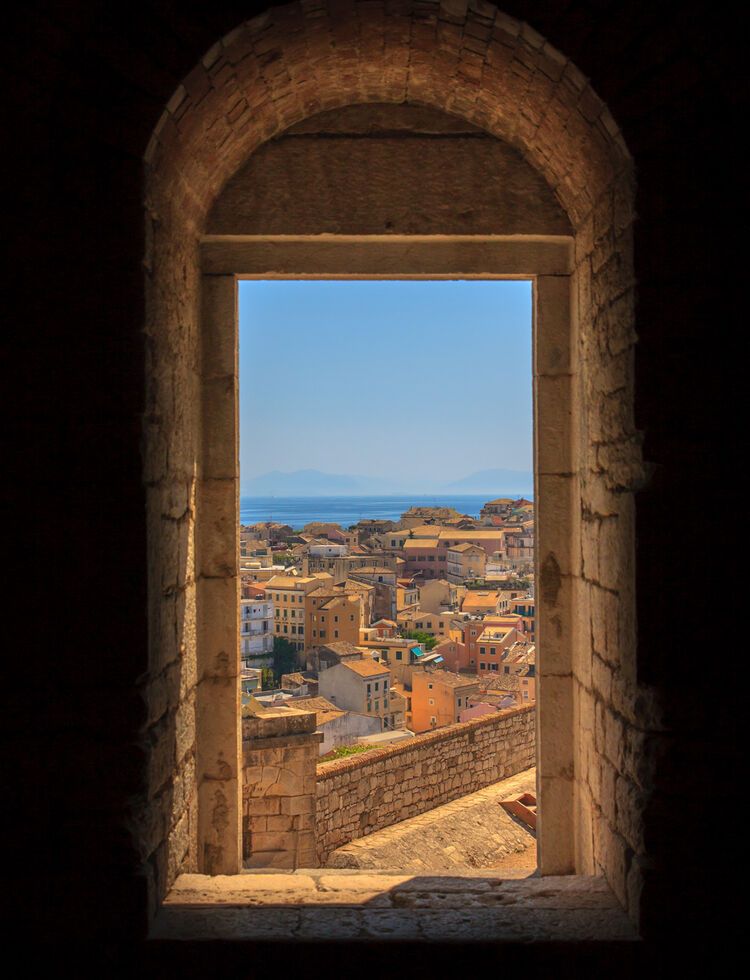 Keep the streets as clean as possible by using the bins provided or, if necessary, keeping your rubbish with you until you find one.
Use a refillable water bottle to try to minimise your use of plastic.
Respect the cultural monuments and relics and don’t use flash photography if there’s a sign forbidding it. It’s to protect the relics.
Do your best to support small, independent family-owned stores and local producers, taking home something handmade and local.
Respect your fellow visitors and the locals.
Be inquisitive and definitely ask the locals for tips
Respect the plants and animals.
Read More Read Less
DESTINATION 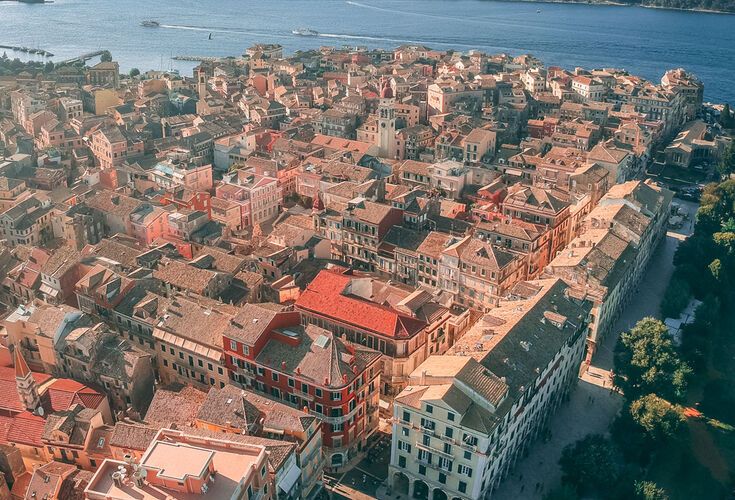 EXPERIENCE
A boat trip to Shipwreck beach in Zante