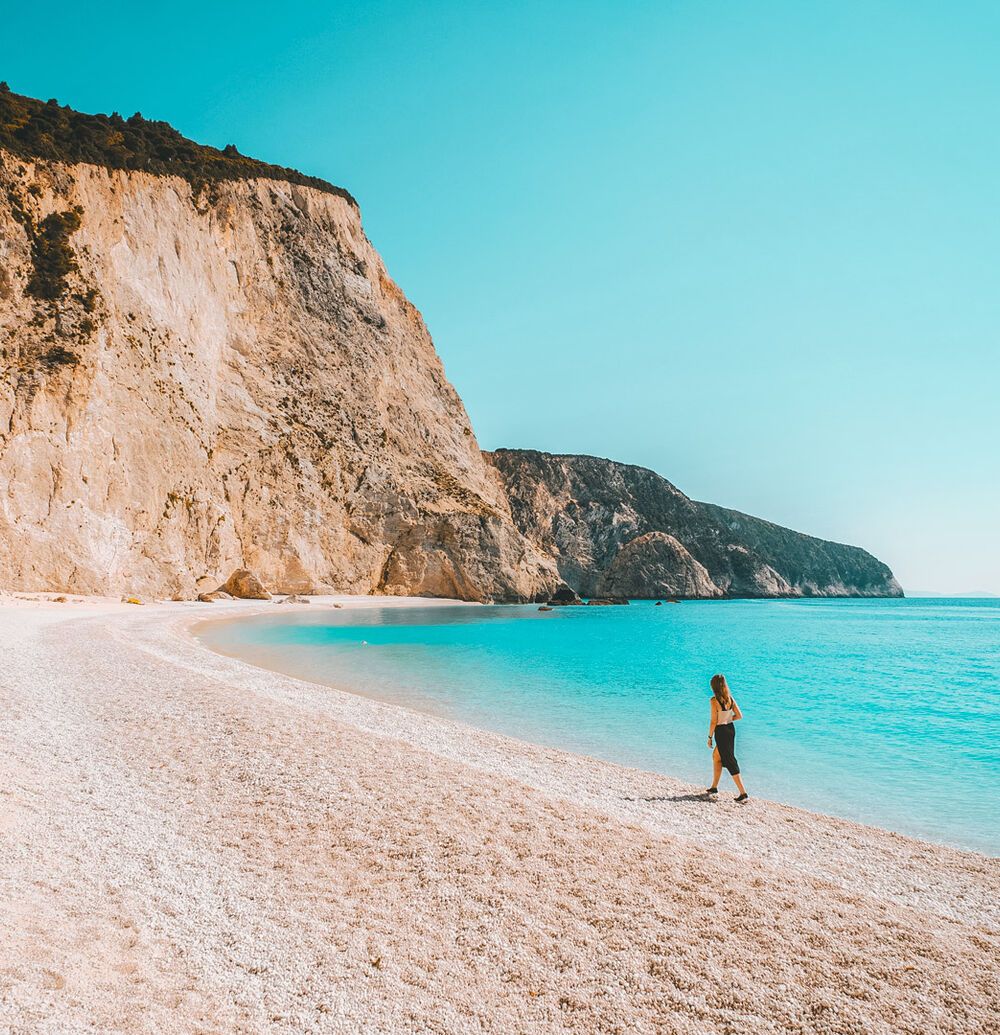 THE BEST BEACHES IN THE IONIAN ISLANDS

Boasting so many of the best beaches in Greece, the Ionian Islands offer a treasure trove of heavenly swimming spots, whether you’re looking for water sports, beach bars or total relaxation under the sun.

Renowned for their blue and turquoise waters, lush vegetation and dramatic geological formations, the Ionian Islands offer a wealth of swimming spots. Our celebration of the best beaches in the Ionian Sea takes you on a tour of coastal gems that satisfy every possible desire when it comes to dream summer holidays.

The best beaches in Corfu

Around 30km due south of Corfu’s main town, Issos is one of Corfu’s coastal highlights. Situated next to Korission Lagoon (a protected Natura 2000 wetlands site) it has held a Blue Flag for environmental cleanliness since 2014 and is characterised by impressive sand dunes and calm sea.

And just north of that, past a small cedar forest that runs along the southwestern shoreline of the lagoon, you will find the equally impressive Halikounas, a whole new experience of unspoiled nature and clear water. Not only will you find a further 3km of golden beachfront here, but wind conditions just off the shore make it a favourite for wind- and kite-surfers. Do your best to stay till sunset. You won’t regret it.

Around 25km west of the main town, Pelekas is another fine option, with golden sands that merge with turquoise waters. Take a stroll to the southern end of the beach where there’s a gorgeous little fishing harbour.

Or perhaps head next door to Glyfada beach, a favourite with families as it has all the amenities to keep the kids happy and the security of lifeguards.

The best beaches in Kefalonia

The jewel in the crown when it comes to beaches on Kefalonia is the multi-awarded Myrtos. As you approach it by road from above, the view is bound to enchant you and the crystal-clear sea will make you want to stay in this little haven for ever. Just a little tip… try to arrive early since Myrtos is the ultimate beach attraction on Kefalonia and one of the undisputed best beaches in the Ionian Islands.

The wild beauty of Myrtos beach

Only 3km from Argostoli, the capital of Kefalonia, you’ll discover the picturesque beaches of Platys (wide) and Makris (long) Gialos. The two beaches are separated by a few rocks and you can swim or even walk from one to the other. Both offer sunbeds and water sports and offer lifeguards, making them popular for families.

Finally, there’s the intriguingly named Xi. On the southern coast of Kefalonia, 8km from Lixouri, this bay is said to resemble the letter Xi (ξ) in Greek. Its combination of rust-red sand and clay cliffs creates a distinctive play of colours. With sunbeds, shallow water, water sport facilities and beach bars, this is another popular destination for families and couples. They say the water-clay mix applied as a facemask has therapeutic properties.

The best beaches in Lefkada

Only 15km southeast of the main town, you’ll discover one of the longest beachfronts in Lefkada, Kathisma beach. Whether you want to relax under the sun or feel fully energised doing one of your favourite water sports, Kathisma offers something for everyone.

And speaking of energy seekers, if you feel like tackling the 80 steep steps down to fascinating Porto Katsiki, you’ll be richly rewarded. (Like Kathismsa, it’s world-famous after being featured in so many brochures and Instagram feeds.) The mesmerising landscape created by the combination of white sand and blue sea will more than compensate you for the effort.

And, finally, we head north to Pefkoulia, a large cove near the fishing village of Agios Nikitas. Easily accessible by car, it has beautiful turquoise water and a mixture of sand and fine shingle that make it popular with couples and families but there’s room for everyone.

The best beaches in Zakynthos

If there was a popular vote for the best beach in Greece, Shipwreck Beach (Navagio) in Zakynthos would always be a candidate because it is one of the most photographed beaches in Greece. But there are so many other highlights to choose from.

Beyond its fine sand and shallow blue sea, Gerakas beach has significant ecological importance as a protected nesting site for the Caretta Caretta (loggerhead) sea turtle. There are umbrellas and sunbeds available for rent and there’s a protected area on the beach so that you don’t disturb a possible nest. Access is forbidden after sunset.

Alternatively, there is the utterly beautiful Porto Limnionas, which is a lagoon rather than a beach. You can sit on the rocks or dive into clear, emerald water, with fantastic visibility for snorkeling and even some shallow caves to explore.

Kayaking to the magical Blue Caves of Zakynthos

And next to the lake of the same name, Keri beach is considered one of the most picturesque on the island, with clear, shallow water and fine pebbles that make it ideal for families. The facilities are good, with several cafes, restaurants and bars, and a diving school to explore the caves in the lake and other underwater attractions.

The best beach in Ithaca

Gidaki should always makes it into lists of the best beaches in Greece. Accessible by boat from the island’s main town, Vathi, this is green-and-blue Ithaca at its absolute best. You will be overtaken by a feeling of isolation and freedom, surrounded by colours that fill you from the inside out. Along with white shiny pebbles and calm, turquoise water, there is a dramatic backdrop of cliffs and greenery. A canteen on the beach offers drinks and snacks.

The best beaches on Paxos and Antipaxos

Another candidate for one of the best beaches in Greece is Voutoumi, a hidden treasure on the postage-stamp-sized isle of Antipaxos. You’ll probably come here directly from Paxos on the morning boat from Gaios harbour, passing the isles of Mongonisi and Kalkionisi and then Vrika beach (where most passengers get off) before continuing to Voutoumi. The waters are calm and shallow and you’ll gladly spend the whole day here, but be sure to bring shade. There is a taverna offering clifftop views that are ample reward for the 200 steps it takes to climb there.

Probably off your holiday radar before reading this is a small collection of islands northwest of Corfu that will make you feel like an adventurous castaway. Othoni, Erikoussa and Mathraki and several smaller islets (Diaplo, Gravi) together form the westernmost island group of Greece – the Diapontia islands.

The largest of the islands, Othoni offers a number of exquisite swimming spots. Fiki beach and the aptly-named White Sand beach, on the northern coast, are particularly noteworthy.

On Mathraki (the smallest of the Diapontian islands) there are a number of sandy beaches, with Portelo and Arvanitiko made all the more special because of their shallow waters.

And on Erikoussa (the northernmost) you step off the boat onto beautiful, shallow-watered Porto beach, where you’ll immediately forget that a world exists beyond these shores.

The Ionian Islands are a collection of islands off the west coast of mainland Greece, in the Ionian Sea. They are known as the Heptanisa (Seven islands) in Greek, although there are more than seven if you include the smaller ones. The best-known Ionian Islands are Corfu, Zakynthos, Kefalonia and Lefkada, and they include Ithaca, Paxos and Antipaxos.

There are airports on three Ionian Islands (Corfu, Zakynthos and Kefalonia) which receive seasonal international flights as well as domestic flights from Athens throughout the year. Aktion airport, by Preveza, is just 20km from Lefkada, which is connected to the mainland by a bridge.

Kefalonia is the biggest Ionian Island (773km2) and Corfu is the second-biggest (610km2).

The island of Odysseus, who was the hero of Homer’s epic poem The Odyssey, is Ithaca. The Odyssey follows the adventures of Odysseus, the King of Ithaca, as he makes his way home after the Trojan War. It took Odysseus (also known as Ulysses) 10 years to complete his exploit-filled journey.

WHERE LIFE HAPPENS Ipsos Di Mare Hotel is a small stylish hotel, part of Nikeris Hotels Group set in Ipsos area that combines the characteristics of...

Livadi Nafsika is a hotel located in the peaceful seaside resort of Dassia. The center of Corfu is accessible by regular bus connection (every 20min)...


See the gallery
Cliffs that plunge into the sea at Milos Beach
Nemanja O
Exotic beach of Porto Katsiki beach from above
Rovinia is 600m of fine pebbles and sand, surrounded by exceptional natural beauty
Iconic white rock cliffs and volcanic formations near the famous beach of Platys and Makrys Gialos
Another enchanting miniature, the picturesque port of Fiskardo is hardly a secret to sailors and celebrity yacht owners
Dreamy Myrtos Kefalonia
Erimitis beach, close to Magazia village
Sandy Vrika beach, Antipaxi island
sponsored by Region of Ionian Islands

COVER STORY
The most Instagrammable spots on Corfu

COVER STORY
Top things to do in the Ionian Islands

BEST OF
10 of the best beaches in Greece

BEST OF
8 top things to do in Corfu

BEST OF
12 of the best beaches in Paros

BEST OF
14 unforgettable things to do in Aegina