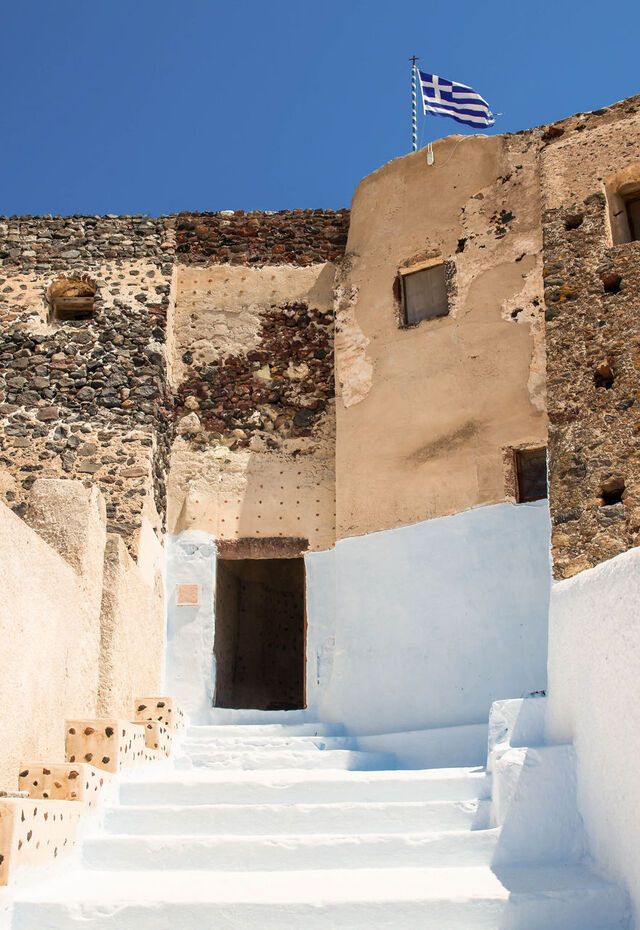 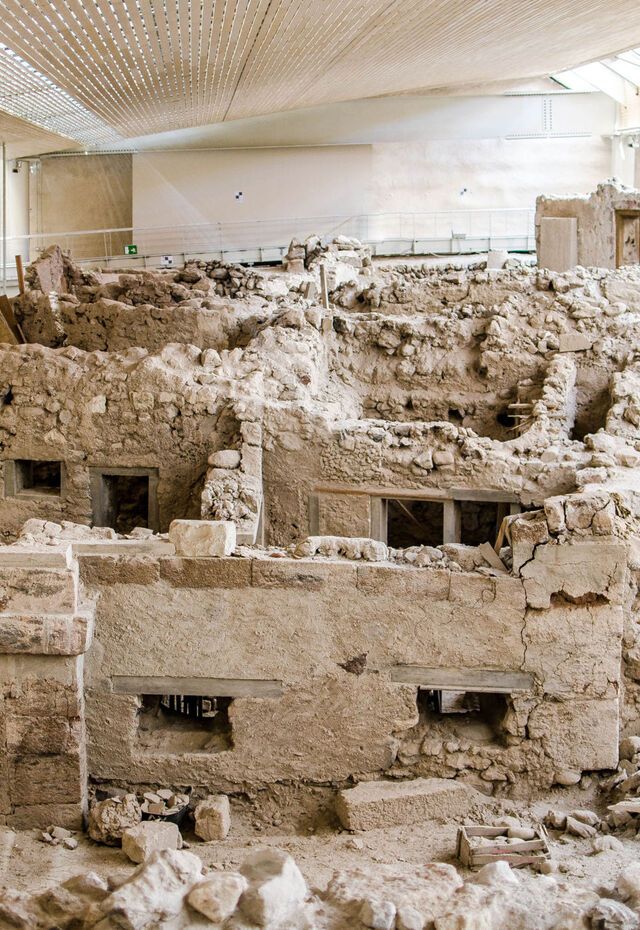 If you’ve done your homework, you’ll know that visiting Akrotiri always features in lists of top things to do on Santorini. The archaeological site in the southwest of the island is old – very old! – and represents a vital piece in the puzzle of European prehistory.

To put it into perspective, the ancient city of Akrotiri was inhabited before the volcanic eruption that created Santorini and its caldera. We’re talking about at least the 4th millennium BC (the Neolithic Period). Indeed, various settlements existed here through the Bronze Age until Akrotiri became, in around 1500 BC, one of the main urban centres of the Aegean. The 50-acre excavation you see today is from that time, much of it preserved in volcanic ash, giving it the nickname ‘Greece’s Pompeii’

It’s also one of the best-designed archaeological sites in Greece, with a bioclimatic roof maintaining a comfortable temperature even in peak summer through natural ventilation at the same time as providing natural light and protecting the artefacts from the elements.

There are walkways suspended above buildings that reach as high as three storeys. The design allows you to fully appreciate the public spaces and town planning of the ancient city, including a complex drainage system, as well as artefacts showing that engineers, architects and artists inhabited what was once a flourishing and advanced society that traded widely with the region. 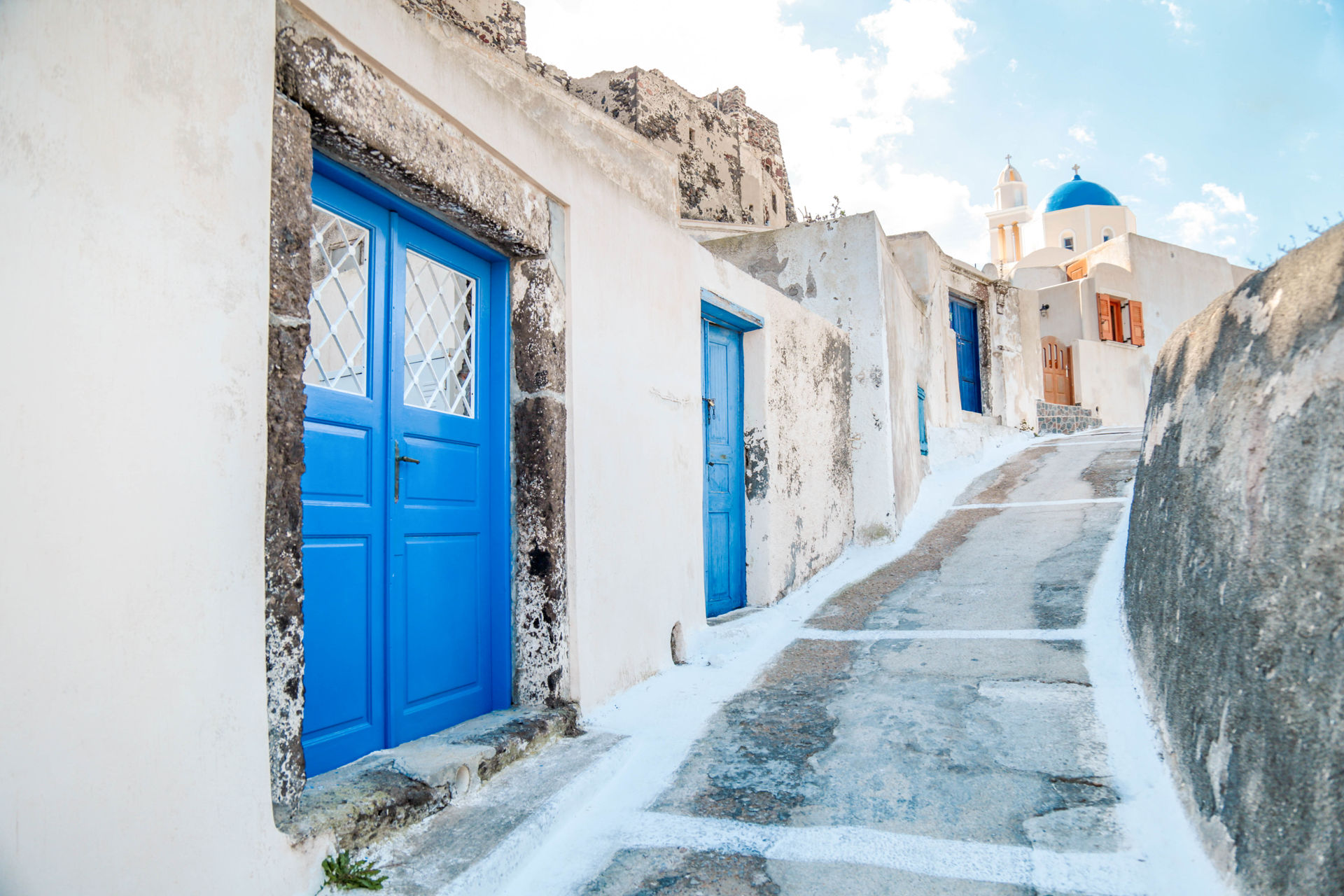 Beautiful street with blue doors of Akrotiri in Santorini 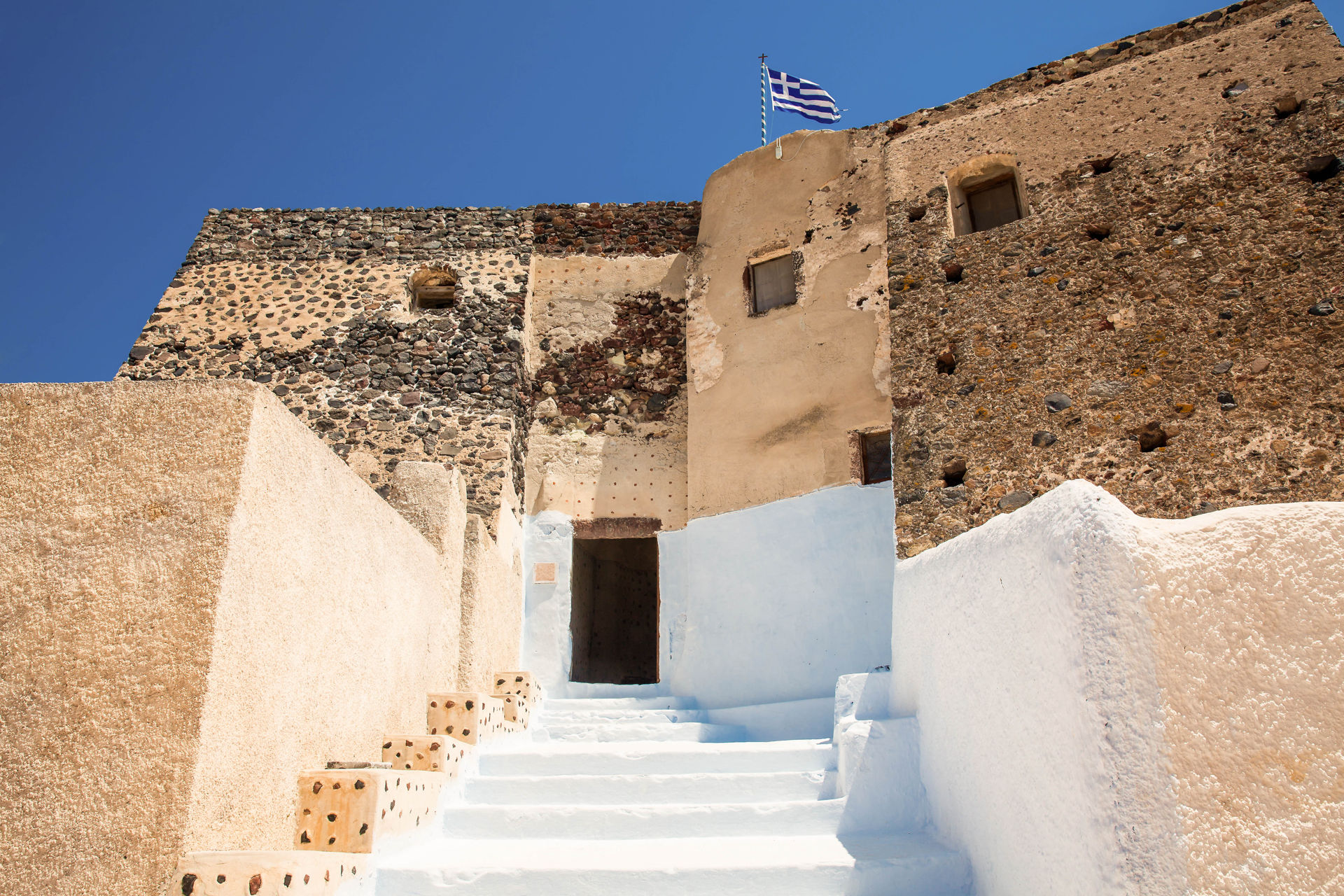 Ruins of the Castle of Akrotiri also known as Goulas or La Ponta, a former Venetian castle on the island of Santorini 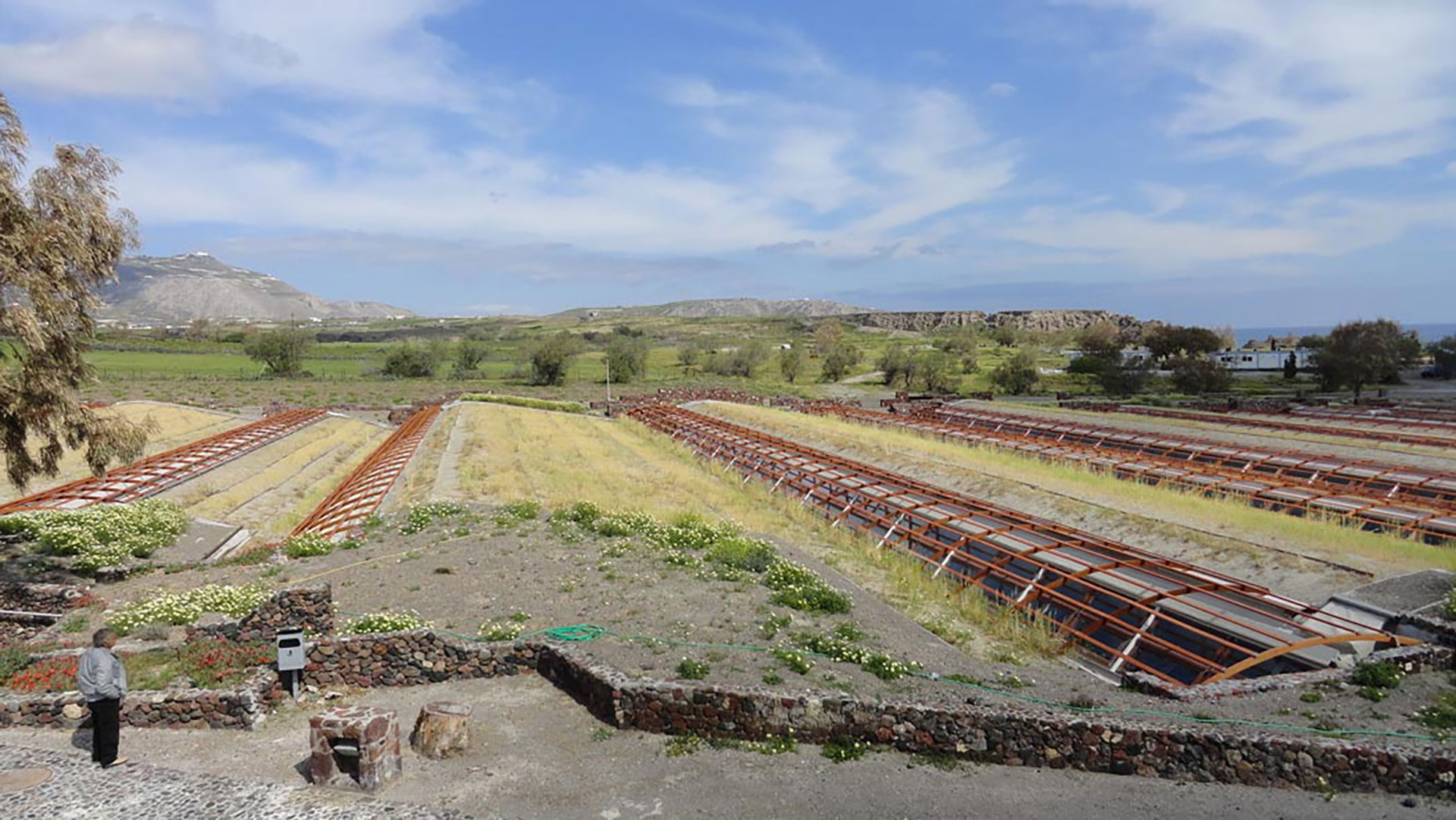 Akrotiri in Santorini is one of Europe’s most important prehistoric settlements
By N.Fintikakis 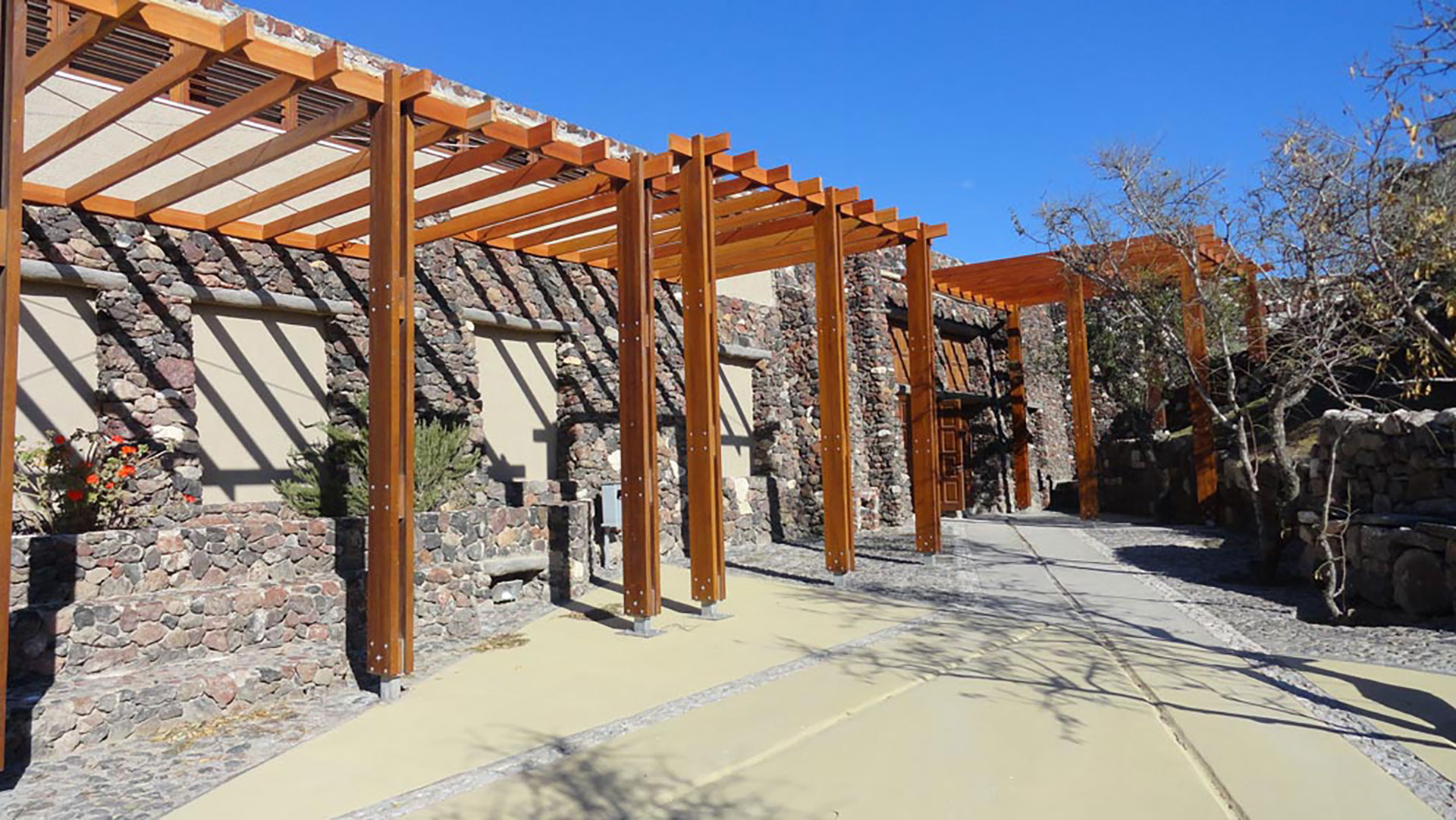 Akrotiri always features in lists of top things to do on Santorini
By N.Fintikakis 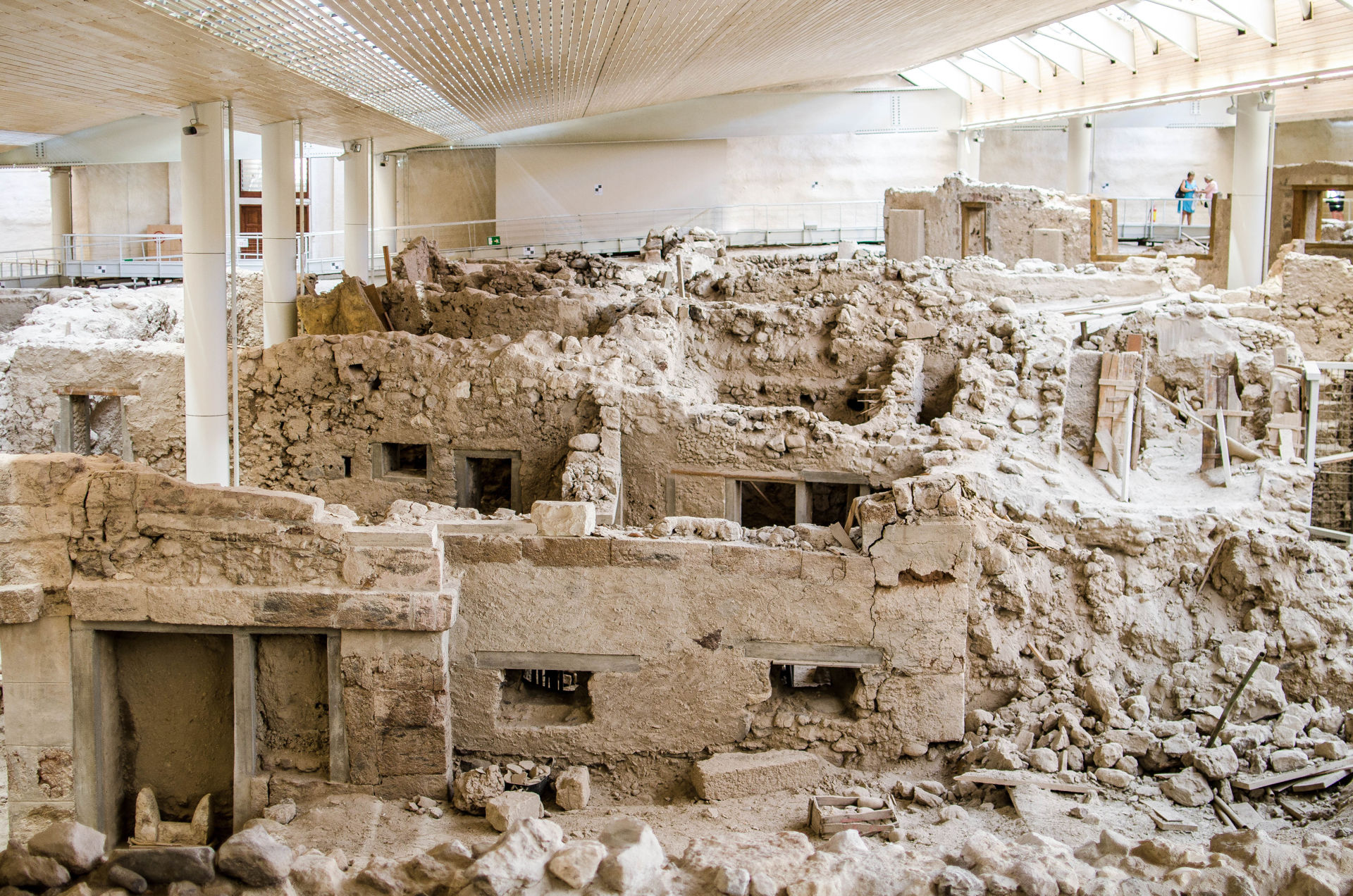 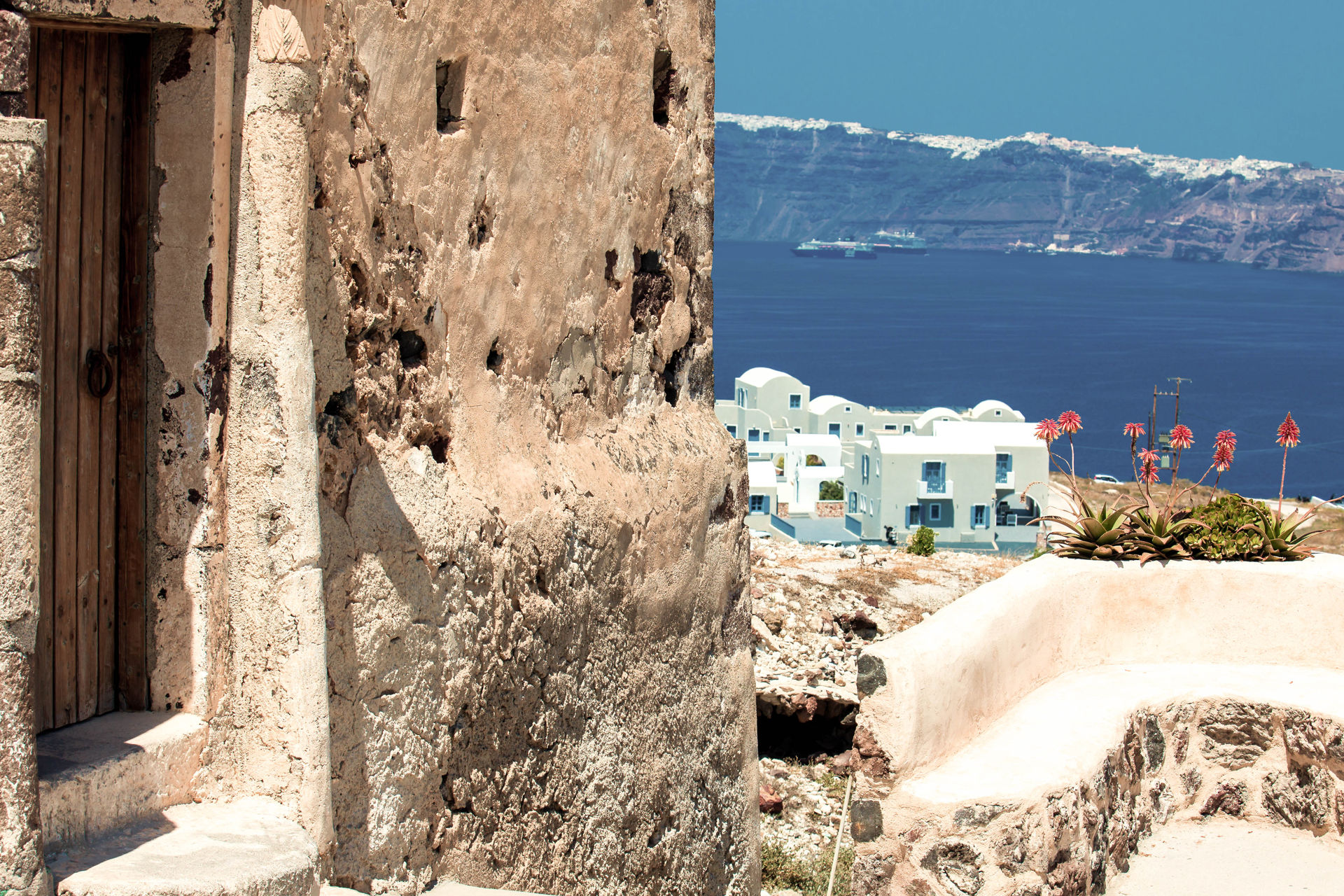 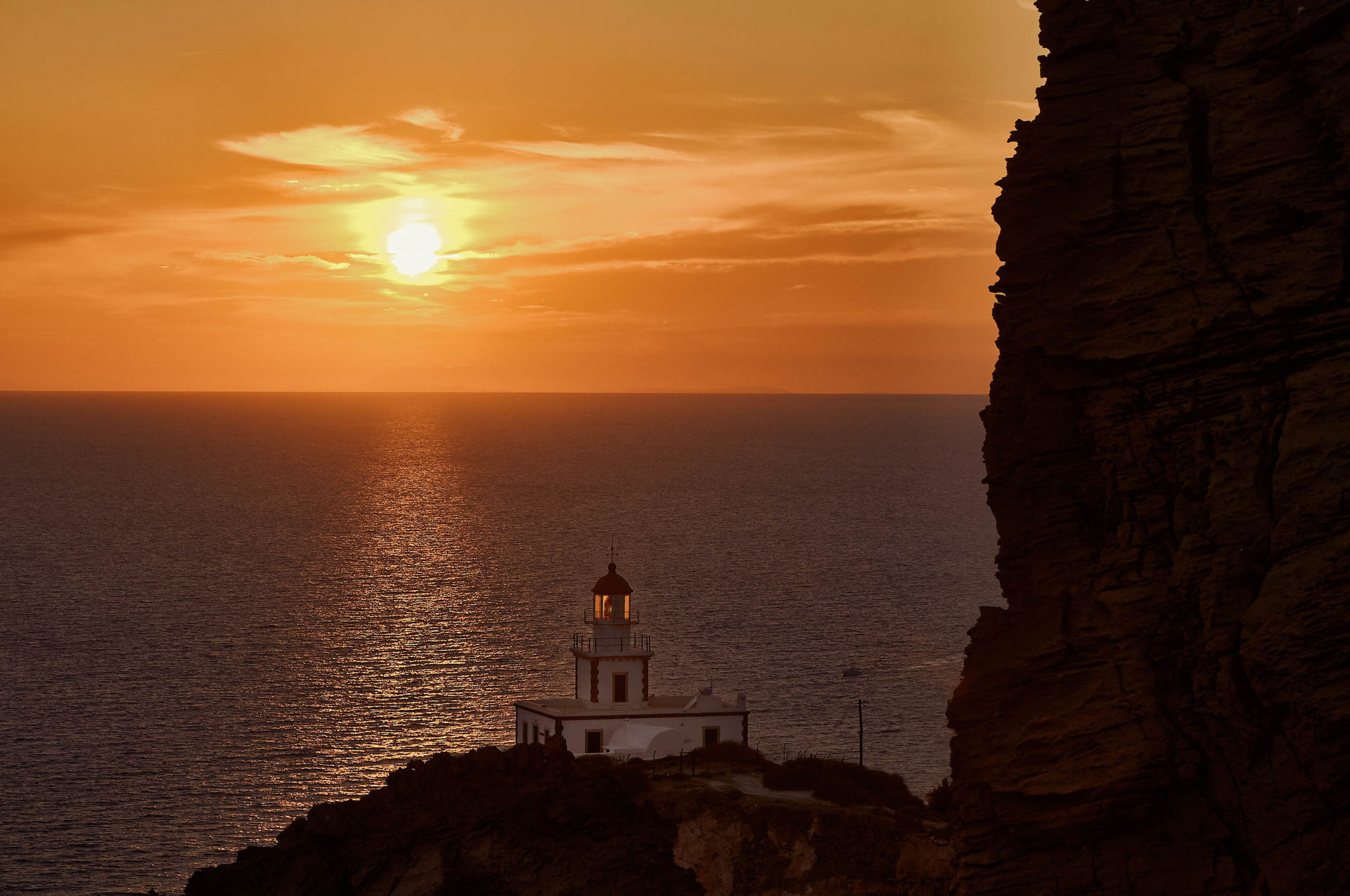 Sunset at Akrotiri lighthouse in Santorini

Although your focus should rightly be on the archaeological site of Arkrotiri, there are other attractions in this corner of Santorini that you can add to your itinerary if you want to make a day of it.

Around 1.7km from the archaeological site of Akrotiri is one of Santorini’s best-known swimming spots. As the name suggests, the Red Beach (Kokkini Paralia) is famous for the iron ore deposits in the volcanic rock face and the rust-coloured pebbles on the beach – although in reality there is a whole palette of colours on the beach. It’s one of the most dramatic places to swim in Santorini.

Seafood in a taverna

Either before or after your swim, there’s a perfect place for you to enjoy a seafood meal by the sea. As you walk from Akrotiri along the coast to Red beach, there’s a great spot that serves the freshest seafood (you have to try the red mullet – or barbounia) along with other fantastic local produce, like cherry tomatoes and fava (split peas). Order yourself a glass of chilled Asyrtiko whiter wine (locally produced) and admire the view.

Around 2km north of the archaeological site is the town of Akrotiri, a settlement that grew around the 14th-century fortress built at its highest point. There’s a great view of the caldera but what you’ll most enjoy is just exploring the alleyways. You’ll find the same Cycladic beauty as elsewhere on Santorini, but there’s a down-to-earth authenticity about it here that is enjoyable in a different way. Within La Ponda (as the Venetian castle is known), there’s a workshop and exhibition of tsampouna – the bagpipe-like instruments made from goats’ skin, for which Santorini is known. Take the opportunity to pop into the church of Agia Theodosia, just before the fortress.

Every sunset on Santorini is magical, but there’s something extra-special about how the sun melts into the Aegean when viewed from the lighthouse at the island’s westernmost point. It’s 4.7km from Akrotiri town (meaning you can hike there and back if you’re feeling energetic) and the lighthouse is one of the oldest in Greece. Having been built by a French trading company in 1892, it still emits a pulse of light every 20 seconds. There are seafood tavernas around here, too.

Group
Enjoy a hassle-free visit to the prehistoric site of Akrotiri on the island of Santorini with an entry e-ticket, and discover its spine-chilling history with...
Group
Join us for a scenic tour of Oia’s secret spots, and the beauty of the surrounding villages. Discover blue domed whitewashed churches, walk through a...
Group
Join us on our Caldera Trail Hike & Sunset in stunning Santorini!
EXPLORE ALL

How do you get to the archaeological site of Akrotiri on Santorini?

When is the best time to visit Santorini?

How much do tickets for The archaeological site of Akrotiri in Santorini cost?

How long do you need to visit Akrotiri in Santorini? 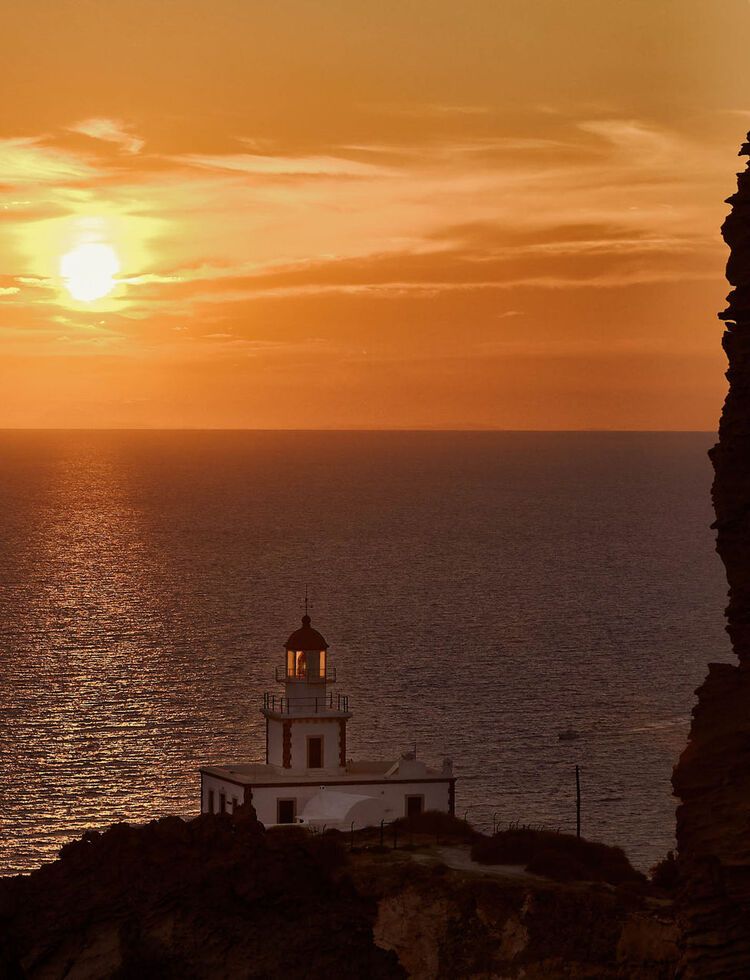 Keep the streets as clean as possible by using the bins provided or, if necessary, keeping your rubbish with you until you find one.
Use a refillable water bottle to try to minimise your use of plastic.
Don’t remove any shells, rocks, fossils or sand from the beach.
Respect the marine life and the plants and animals onshore.
Explore your surroundings but please keep to designated paths for your own safety and to avoid disrupting the flora and fauna.
Refrain from touching any remains or monuments. The fingers’ natural oils can be extremely damaging to artefacts.
Do your best to support small, independent family-owned stores and local producers, taking home something handmade and local.
Be inquisitive and definitely ask the locals for tips.
Read More Read Less

EXPERIENCE
Enjoy a vineyard and wine tour of Santorini