A 5-day road trip to the heart of Ancient Macedonia

sponsored by Region of Central Macedonia
Delve into the fascinating world of Ancient Macedonia by retracing the footsteps of Philip II and his son, Alexander the Great, and visiting the cultural landmarks of a region steeped in history.

Your itinerary takes you to the Ancient Macedonians’ most sacred sanctuary and the resting place of Philip II of Macedon, as well as the remains of the great palace of Pella and birthplace of Alexander the Great. Also featuring Greece’s northern city of Thessaloniki, the itinerary can be followed to the letter or you could extend or shorten your stay. Just prepare to travel deep into European history.

Setting out from Thessaloniki’s Makedonia Airport, your cultural road trip starts in the most sacred town of ancient Macedonia. Dion rose in importance as the Kingdom of Macedonia flourished in the 4th century BC and was where Philip II celebrated victories and Alexander offered divine sacrifices before his travels. Your day ends in Litochoro, in the shadow of Mt Olympus. 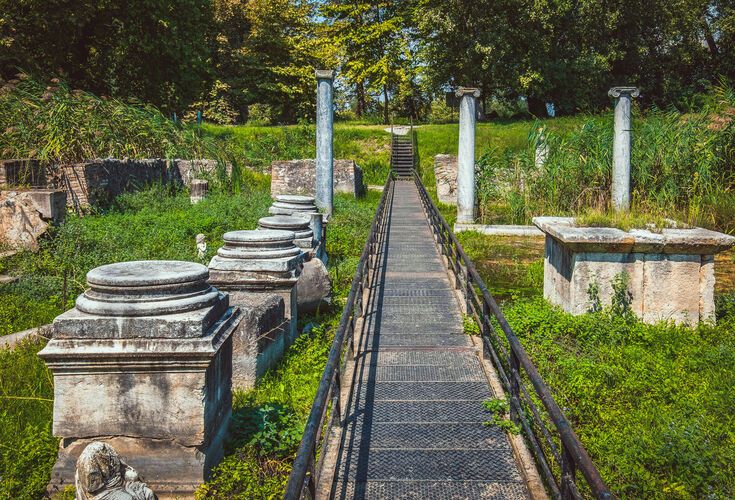 The Archaeological Park of Dion

Dion is one of Greece’s most atmospheric archaeological sites. Established to worship Zeus, its monuments are scattered amongst greenery, trees and ponds. A quarter of the park’s 150 hectares is made up of sanctuaries – the oldest (end of 4th century BC) being dedicated to Demeter, two sanctuaries honouring Zeus (Hypsistos and Olympios) and the Sanctuary of Isis accessible over a small bridge. There is also a Christian basilica and public baths and, in the wider area, the remains of Hellenistic and Roman theatres. 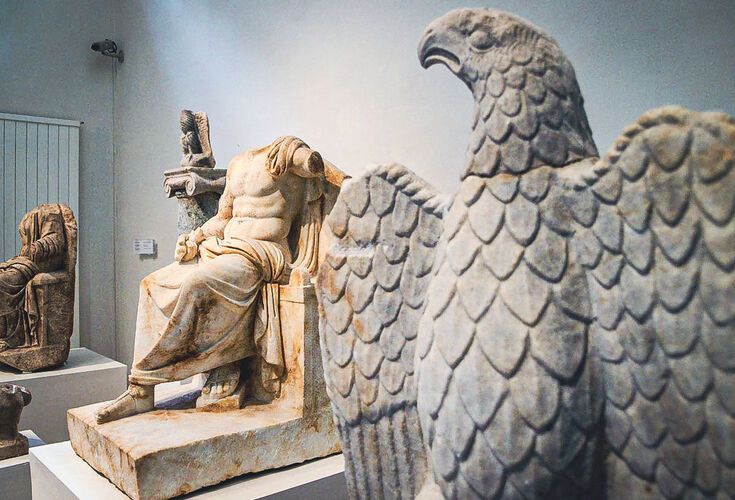 Around 500m from the park, Dion’s Archaeological Museum is one of the most important in Greece, given the significance of the town. It contains the statues of the Sanctuary of Zeus Hypsistos (those in the park are replicas) as well as statues of Isis, Dionysos and Aphrodite. You will also find a wide selection of smaller artefacts, including coins and vases. But perhaps the most intriguing exhibit is a hydraulis, a 1st-century BC wind instrument, similar to a church organ. 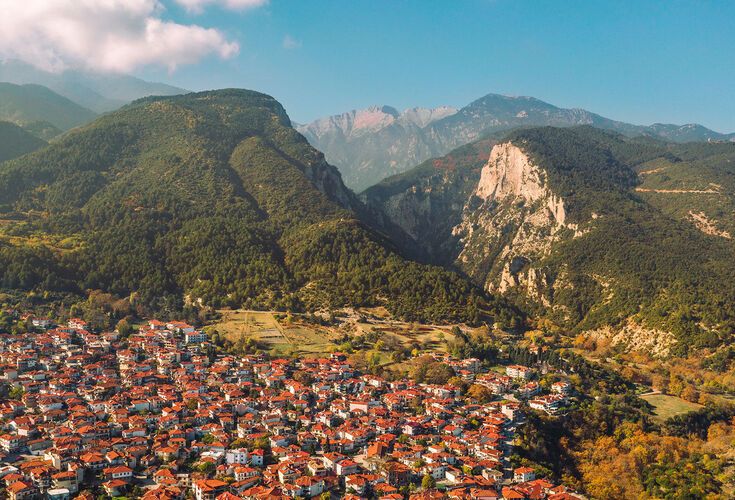 The nearest town to Mt Olympus, Litochoro manages to be both mountainous and coastal (being within touching distance of the Pieria coastline) and features Macedonian and neoclassical architecture. Wandering through cobbled alleyways and small squares (like Platanos Square), you’ll find stone fountains and churches. And alongside the Enipeas River is a leafy municipal park. There are tavernas in the centre and along the riverbank serving traditional Macedonian food. In summer months, head to Plaka beach. It’s fully organised, with bars and restaurants.

The Royal Tombs of Aigai, in Vergina, are one of the greatest burial sites of antiquity, containing the remains of Philip II (father of Alexander the Great) and other members of the great Macedonian dynasty. Your day ends in nearby Veria, a town with strong Byzantine influences. 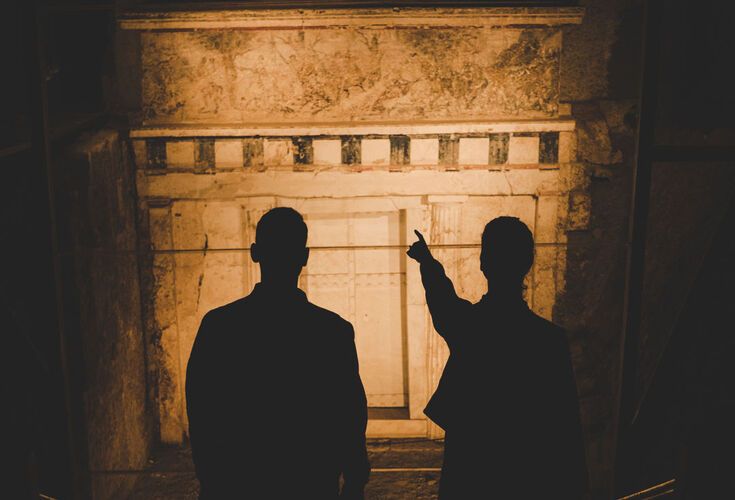 This UNESCO-protected archaeological wonder preserves not just the palatial tombs of Philip II and other members of Macedonian royalty but also the integrity of a solemn burial mound and a museum within the tumulus. It contains four palatial tombs (including those of Philip II and Alexander the Great’s teenage son, Alexander IV) and some of the most astonishing finds from Macedonian history: the gold larnax containing Philip’s bones (emblazoned with the Macedonian sun), his massive armour and the golden wreath he wore on his funeral pyre, almost luminous in the dimmed lighting, among them. Around the mound are some 300 smaller burial sites, including the so-called Cluster of the Queens, where Philip’s mother, Eurydice, and daughter, Thessaloniki, are buried.

Take a tour of the Royal Tombs of Aigai 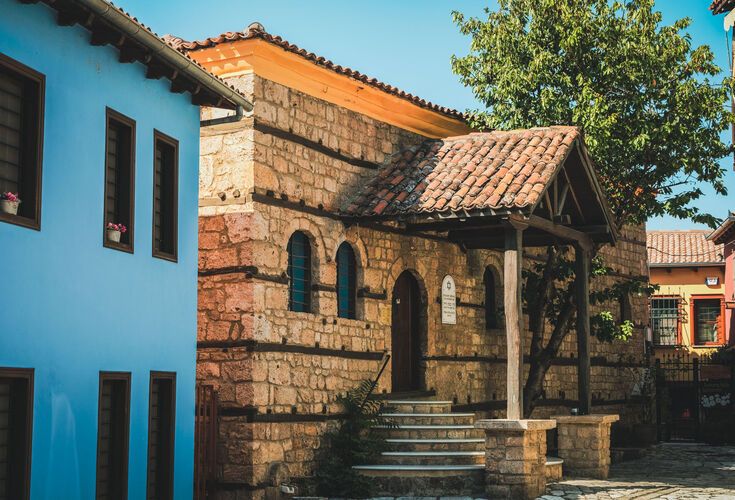 The small city of Veria was founded in the 5th century BC, but its most striking legacy is from the 11th-14th century AD. Dozens of churches testify to its position as one of the most important cities of the Byzantine Empire. Also interesting is the Jewish quarter (known as Barbouta, after a fountain located there), dating from the 1850s. You will find an impressively decorated synagogue by the Tripotamos River. And in the Kyriotissa district, a maze of winding alleyways hides two-storey houses with characteristic overhangs. You’ll find a selection of traditional tavernas and cafes on the river.

Your third day takes you to the ancient capital of Macedonia. Pella is best known as the birthplace of Alexander the Great, eventually replacing Aigai as the site of the kingdom’s principal palace and city. Your day ends in waterfall-filled Edessa. 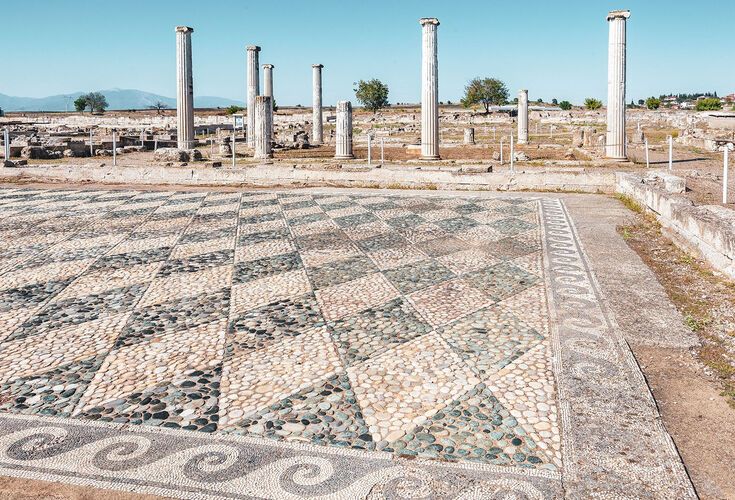 The archaeological site of Pella

Though we are left with only the ground-level remains of the palatial complex and surrounding buildings, you’ll be left in no doubt that Pella was the last word in ancient city planning. It was far more than a royal palace, with an agora and public and private buildings making it the political, economic and cultural centre of Greece. The city followed a Hippodamian grid plan of blocks and paved streets and had a sophisticated water supply and sewerage system. And Pella knew all about the finer things in life, with Doric and Ionian embellishments to buildings and the floors of the richest houses being decorated with mosaics. 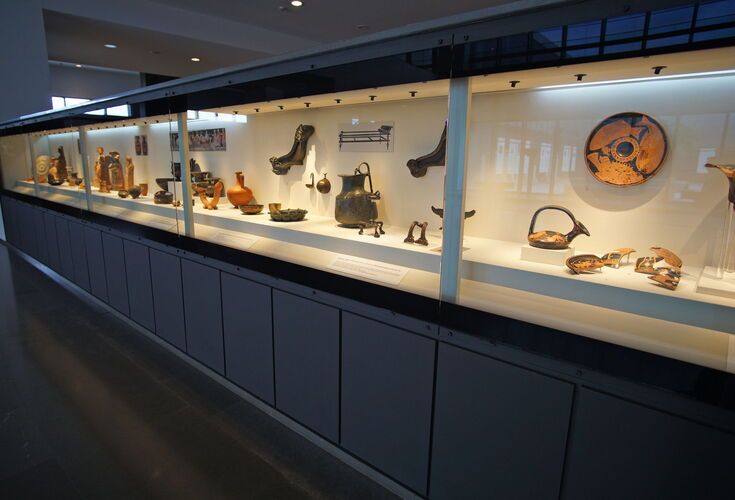 Completing your tour of ancient Pella is the on-site museum housing many of the artefacts from the city’s heyday. The standout exhibits are a marble head of Alexander the Great and artefacts shedding light on daily life in antiquity, including a collection of intricate floor mosaics and 5m-tall wall decorations. There are also fascinating artefacts from the agora and burial treasures, as well as depictions of the palace revealing a layout of great sophistication and artistry. 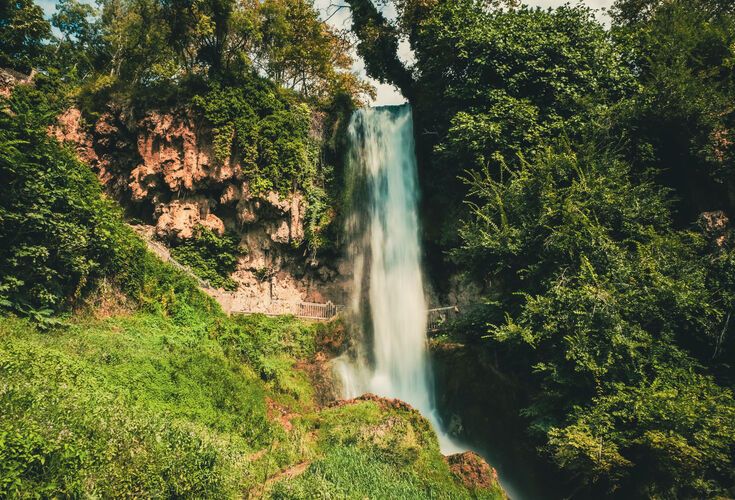 Heading west, you reach Edessa, Greece’s city of waterfalls. You can hear them before you see them, especially the 70m tall Karanos Waterfall (which has a footpath that takes you behind a thunderous curtain of water). There’s an Open Air Water Museum, where you can learn about Edessa’s once-prosperous water-powered textile industry, and a Folklore Museum. And your day ends in Varosi – a Christian district during Ottoman rule, with restored two-storey traditional Macedonian houses – at a tsipouradiko (meze restaurant) or taverna.

You head back to Thessaloniki today. One day is barely enough to do justice to this fascinating city, so feel free to extend your stay. But you’re about to discover everything this fantastic city offers in terms of cultural wealth. Just be sure to make time to enjoy the famous food and nightlife scene. After all, culture comes in many forms. 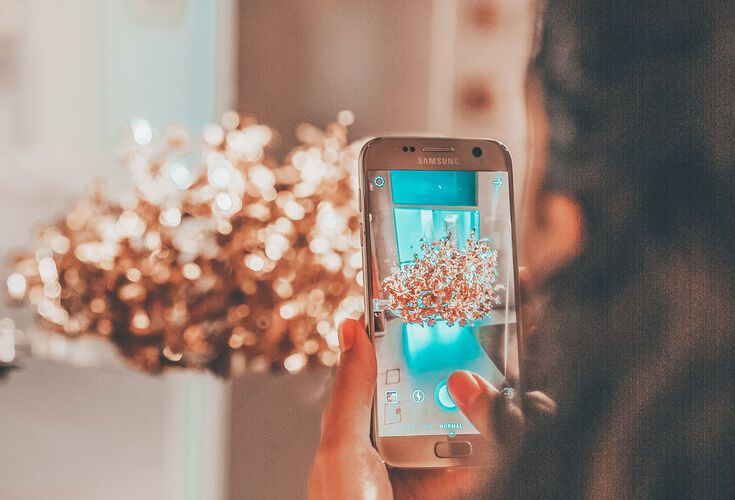 Delve even deeper into Macedonian history with a visit to Thessaloniki’s Archaeological Museum. And we mean deep! The museum’s Petralona Hoard of bronze tools goes back to the 3rd millennium BC and you retrace the steps of the region’s birth as an independent kingdom to when Thessaloniki was the seat of the eastern Roman Empire. Look out for the craftsmanship on the Macedonian tomb of Agia Parakaskevi and the intricate gold-work for which ancient Macedonians were famed – particularly in the collection of gold wreaths. 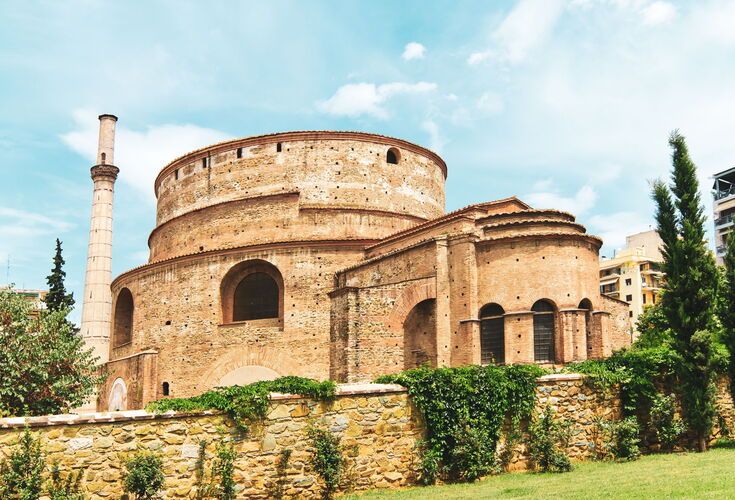 A cultural tour of Thessaloniki

Time to step into the streets of Thessaloniki and enjoy everything the city’s diverse inhabitants have left us. The museum of the White Tower and nearby statue of a horse-mounted, battle-ready Alexander the Great are an obvious place to start. The Romans left us the Galerian Complex (including the Arch of Galerius, Octagon, Apsidal Hall and UNESCO-protected Rotunda) as well as their agora, while the Byzantines are represented through countless churches, including Hagia Sophia and Agios Dimitrios (also UNESCO World Heritage site monuments). And look out for the Ottoman influences in villas and Bezesteni Market. 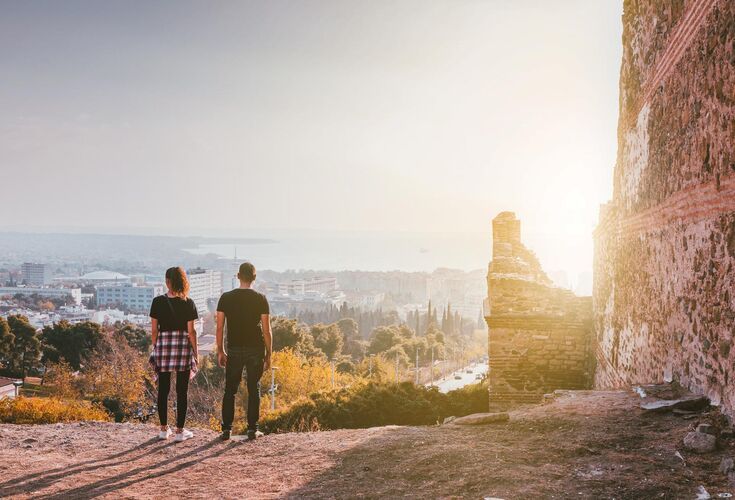 Your day ends at the highest point of the city – the Ano Poli, or Upper Town. There are countless gems hidden in the labyrinth of streets, including the Byzantine church of Hosios David (with its fabulous murals) and the Vlatadon Monastery – both UNESCO-protected – and the Ottoman-era Pasha’s Gardens. But the highlight up here is the complex of Byzantine forts, towers and walls – collectively known as the Kastra (Castles). The Heptapyrgion and Trigoniou Tower are musts, especially their views of the Thermaic Gulf. So once you’re done, find yourself a traditional little taverna, ideally with a terrace view, and let the memories sink in.

Your final day takes you to the eastern coast of Halkidiki and Ancient Stagira, famous as the birthplace of Aristotle. You explore the legacy of not just one of the greatest philosophers of antiquity, but the tutor of Alexander the Great in matters of war, morals, logic and art. And once you’re done in Ancient Stagira, you’ve more than earned yourself some time on the beach. 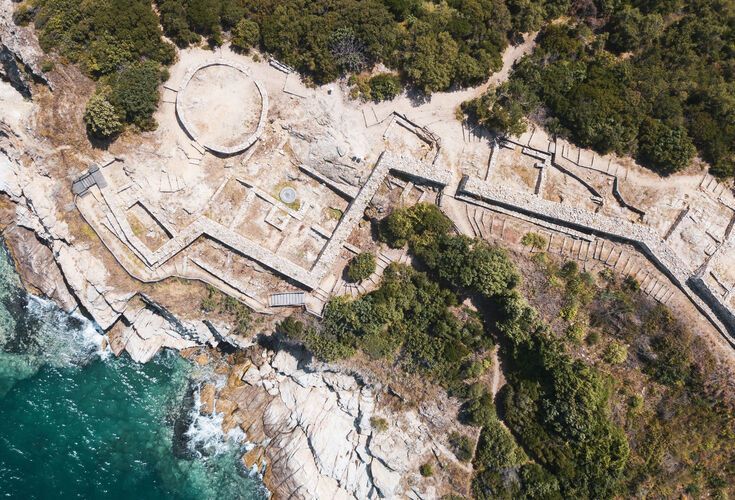 The ancient city of Stagira was founded in the 7th century BC, with Aristotle being born here three centuries later. But Stagira wasn’t just important in antiquity, with the walls you find in the archaeological site being from Byzantine times. Also worth visiting is the nearby Aristotle’s Park, in which there are instruments (a prism, optical discs, a compass, a sundial, parabolic refractors and wind turbines) that allow you to test the effects of what Aristotle called ‘the Naturals’. 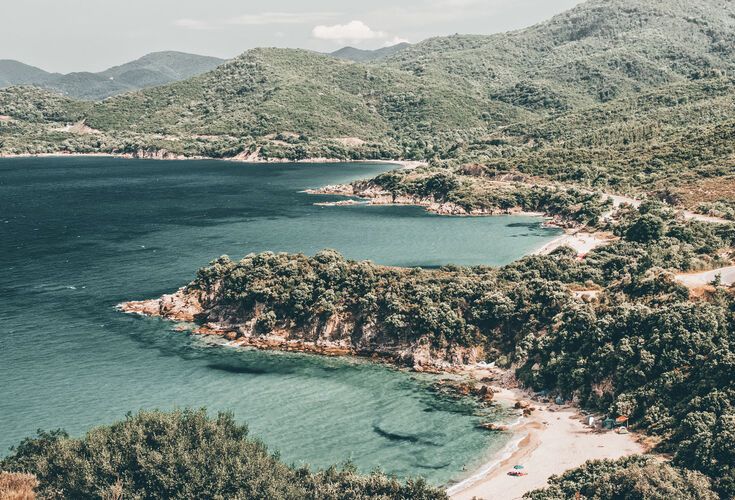 With all that culture under your belt, the rest of your day is spent on the beach. You can easily walk (or drive) from the archaeological site to Sykia beach, a charming little cove next door. Or head a bit further to Olymbiada, where there are more facilities and you can combine swimming with a seafood meal in a waterfront taverna. And let’s not forget, you’re in Halkidiki now, famous for its coastline. So if you want more sunshine and sand, you can extend your stay and search out more beaches here or down the Sithonia or Kassandra peninsulas. Alternatively, it’s time to head back to Thessaloniki.

Group
All aboard, take the scenic route through history by rail in a place explored by over 2-million visitors annually.
Group
Be part of the Kassandra full-day tour from Thessaloniki
Group
If your time is limited but still want to fully experience mountain Olympus, this 2-day trip is just designed for you! You will hike with...
EXPLORE ALL
Offer

Thessaloniki
from 266 €
BOOK NOW
VIEW ALL
Book your trip

ITINERARY
A 5-day extended city break in and around Thessaloniki

ITINERARY
8-day road trip to experience the best of Chania