A delicious slice of heaven in the Cyclades 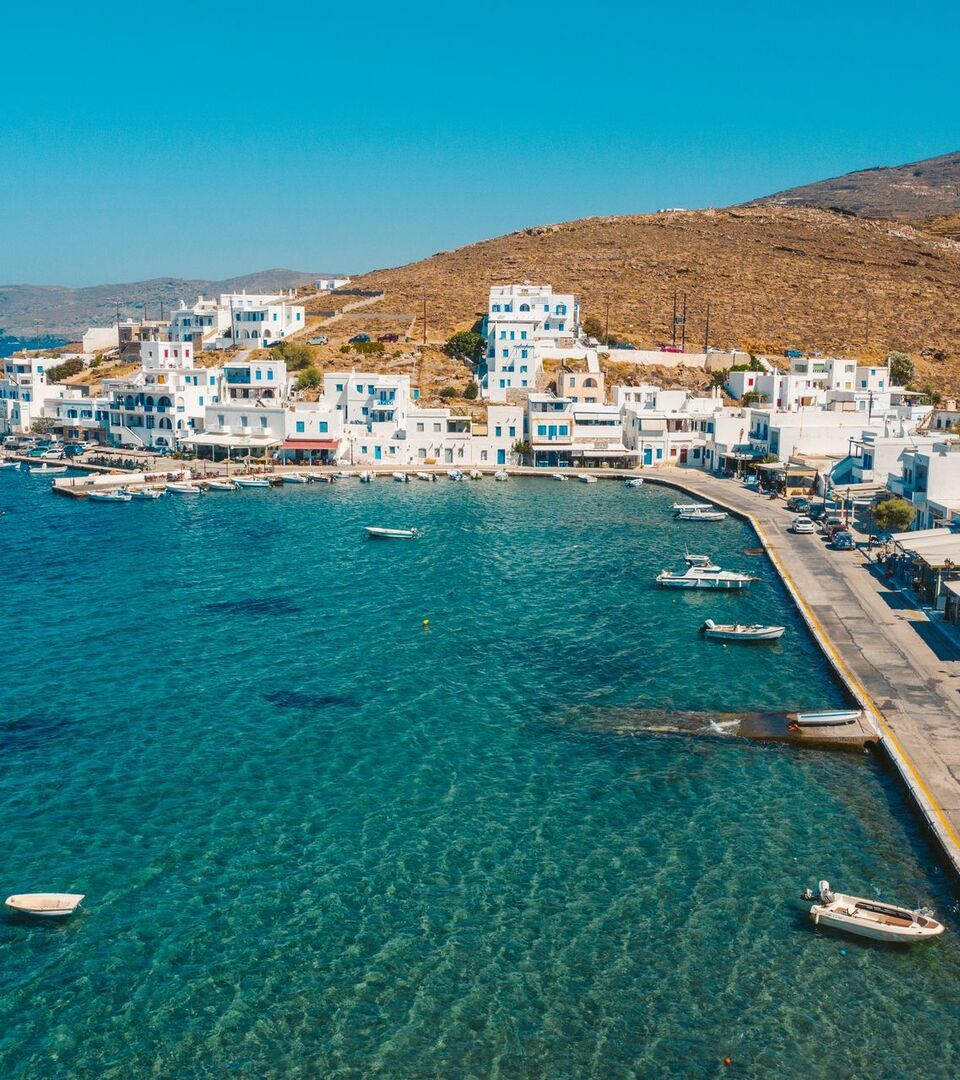 Today
11°
WED
9°
THU
13°
FRI
10°
SAT
10°
Once famous for its religious significance, Tinos has developed a faithful following for its other miracles – food, hiking, surfing and wild beauty – making it one of the up-and-coming stars of the Cyclades islands.

The wonder of Tinos isn’t only the miraculous icon of the Virgin, which gave this island its fame. It’s the wild beauty that excites you: rocks eroded by the wind, beaches with deep blue water and traditional Cycladic villages that climb up the hillsides.

A thousand more miracles are waiting to be discovered on this island that is part of the Cyclades but just a short ferry ride from Athens. You will find beaches for relaxing or sea sports like scuba diving and surfing, an abundance of local delicacies and the unexpected sights of lunar landscapes and, each August 15, pilgrims making their way up to Our Lady of Tinos on their knees.

All around Tinos are 750 chapels and churches (Catholic and Orthodox), 600 ornate dovecotes, 34 settlements and the Temple of Poseidon, where the ancients were purified before they visited the sacred island of Delos. Once you get to know Tinos, you too will become a believer.

What to do on Tinos island

Pyrgos, Kardiani, Ysternia, Ktikado, Triantaros-Berdemiaros, Falatados, Loutra, Tripotamos. The villages of Tinos are like ornaments decorating the island’s slopes and valleys. Walk among them, one by one: there is marble everywhere, especially in the squares with fountains where you’ll cool off with a drink of water. Take a break at a traditional cafe in the shade of the sycamore trees and have a coffee or a bite to eat. There is always Tinian cheese, louza (smoked meat) and sweet raki on offer. Now that’s real hospitality!

Take a food tour of Tinos

Legend says that the great ancient sculptor Phidias taught his craft on Tinos. And who’s going to argue with legend? At the museums of Tinos (The Cultural Centre of Tinos and The Museum of Marble Crafts and Tinian Artists in Pyrgos, amongst them), you will admire immortal works of Neohellenic sculpture. Renowned sculptors Giannoulis Halepas, Dimitris Filippis, the Fitali brothers, Lazaros Sochos and Georgios Vitalis have all left their mark here. Learn the secrets of their art by taking classes at the marble sculpture workshops.

Keep an eye out for the masterful dovecotes

Peristeriones (as they are called in Greek) are a feature of the Tinos landscape and considered some of the most impressive works of art in the Cyclades. There are over 600 dovecotes (houses for domesticated doves and pigeons) made of slate, stone and limestone and covered with lithographs. The pigeons and doves swoop around them, but you’ll need a trigger finger on your camera to catch them in flight!

Witness the pilgrimage to the holy island of the Cyclades

Every year, on August 15, thousands of believers descend upon Tinos island to accompany the procession of the miraculous icon. You can hardly make out the icon of Panagia Evangelistria, hidden behind the numerous offerings that surround it. On their knees, pilgrims begin the ascent from the port to the church, overlooking Tinos town since 1880.

Surrounding the village of Volax is a surrealistic plateau with huge boulders, strewn like the abandoned toys of a playful giant. The round boulders of all different sizes are hundreds of years old. They look like meteorites but are, apparently, the geological phenomenon of erosion. Experience the wild beauty of this lunar landscape, crossing the region of Kakovolo, from Falatado to Panagia Kaki Skala.

Climb to the peak of Exomvourgo and view the Cyclades

Some 640m above sea level, the mountain of Exomvourgo stands out among the island’s landmarks. At its base, you will find the Catholic Monastery of Ieras Kardias (Sacred Heart), one of the most impressive attractions on the island. The fortress of Exomvourgo, at the peak, was once the highest in the Aegean, but it was besieged and destroyed by the Turks in 1715. From up high, you can see not only Tinos but also the islands of Samos, Ikaria, Naxos and Delos… Breathe in the Aegean!

This beach stands out on Tinos because of its sculpture-like rocks and wild water. As you leave the beach, walk as far as the lighthouse at Papargyras and then around the highest mountain in Tinos, Tsiknia.

Experience the best of Tinos 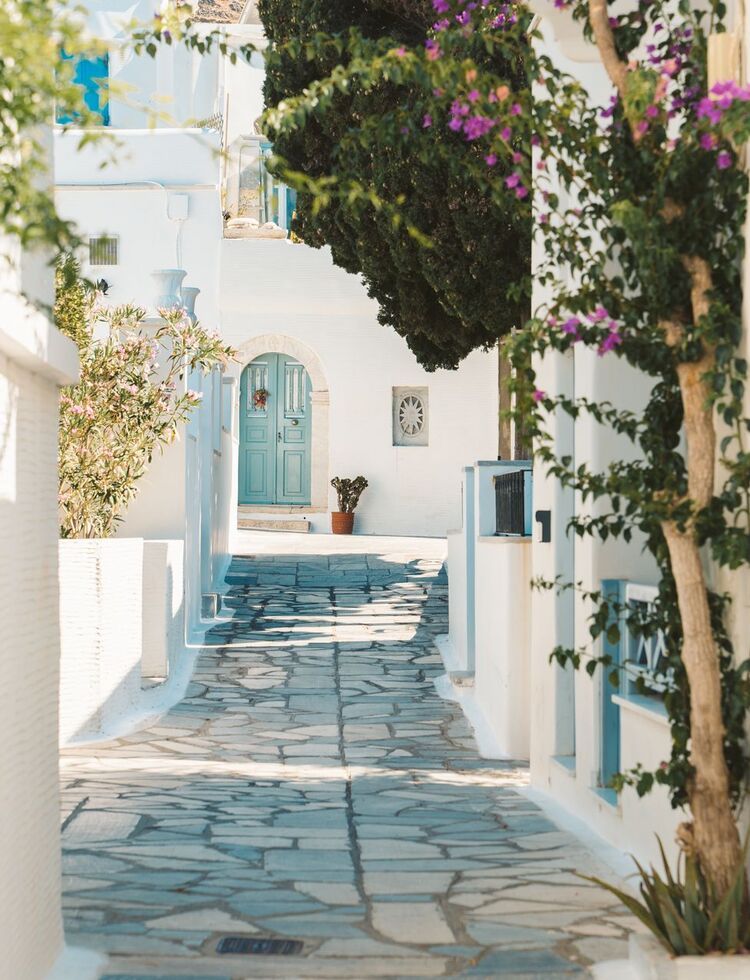 Explore the best villages of Tinos 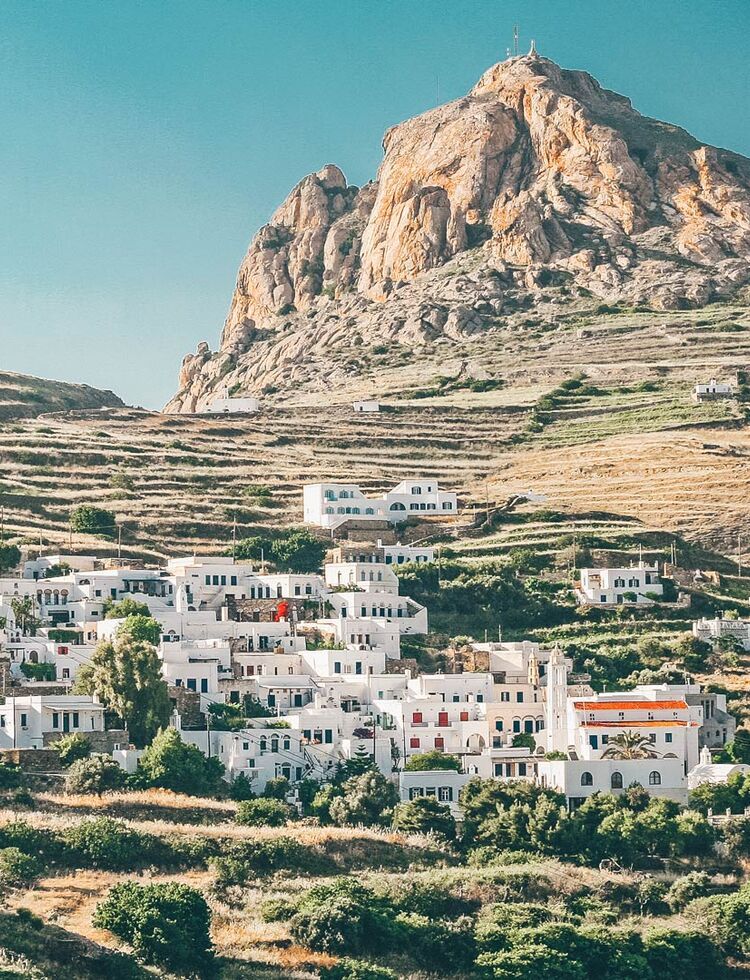 Discover the hiking paths of Tinos 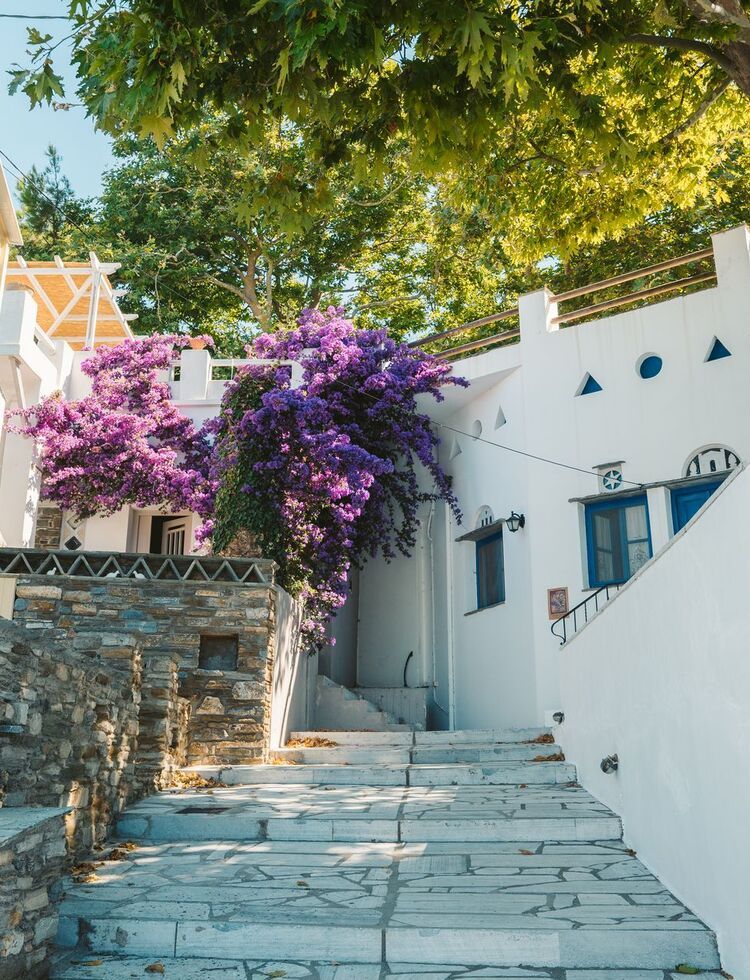 A culinary tour of Tinos

Tinos
from 135 €
BOOK NOW
VIEW ALL
Book your trip

#discovergreece
See the gallery
It is worth walking through its narrow streets and admire the simple Cycladic architecture, Dio Horia village
Nothing is more closely linked to the Tinian culture than its wine production and the dovecotes!
Grilled sardela fish with tomato and garlic
Picturesque alley at Tinos Hora
Small village of Mali, in Tinos island
Typical cyclades architecture & aesthetics in Hora of Tinos
tinos alleyway, Greece
Kalyvia is an organised and family-friendly beach to the south
Head to the Museum of Marble Crafts, to understand why Pyrgos is Tinos' most famous marble village
The Virgin Mary of Tinos, a landmark of Greek Islands
Panagia Evangelistria is your first taste of Hora (main town & port)
Make sure to explore the streets of Hora with cobbled alleys, as well as neoclassical building with beautiful gardens
Immerse yourself in Tinos' famous marble craft, Pyrgos village
Discover the hiking paths of Tinos
Peristeriones are typical to the Tinian landscape, and are some of the most impressive works of art in the Cyclades
Volax is also a village of basket-weavers
Agios Petros is a beach separated in two by a chapel on a small knoll
Charming Falatados is known for its raki and excellent wine
Volax stands out because of the smooth, granite boulders around and in the village
Panormos settlement is the perfect place for an evening stroll and a last taverna meal by the sea
You’ll find plenty more examples of Tinos’ famed marblework in the windows and doors, as you wander the streets of Pyrgos
Island details on the seaside road of Panormos settlement
Boulders in the village of Volax
Don't leave Pyrgos village without trying local sweets in the village square!
Dio Horia has an impressive cobbled square, with plane trees alongside whitewashed houseswith multicoloured windows
There are more than 150km of signposted hiking paths connecting the villages and crisscrossing the island
Kalyvia is an organised and family-friendly beach to the south
Kardiani has been awarded ‘traditional settlement’ status
Kardiani with a mixed Orthodox and Catholic architecture
Panormos, a seaside village located on the northeast side of Tinos
BEST OF
9 top things to do in Tinos
So much of Tinos’ fame has been built around its religious centrepiece, the Panagia Evangelistria church, a beacon in the Orthodox faith.
Discover It 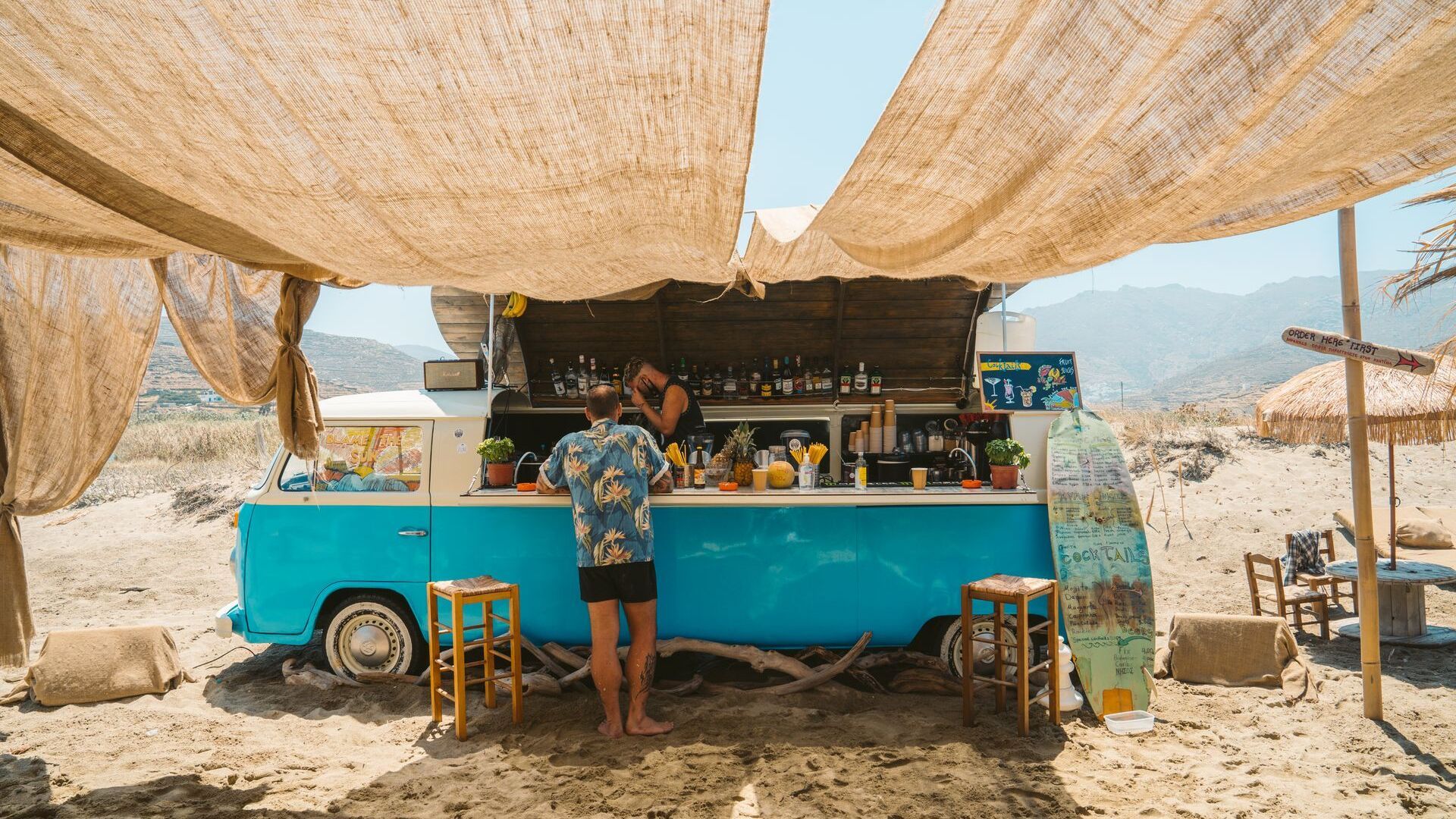 ITINERARY
A 10-day island-hopping tour of Andros, Syros and Tinos
Three Cycladic gems, each with their own unique character, and so close to one another (and the ports of Athens) that you won’t be able to wait to get started.
Discover It 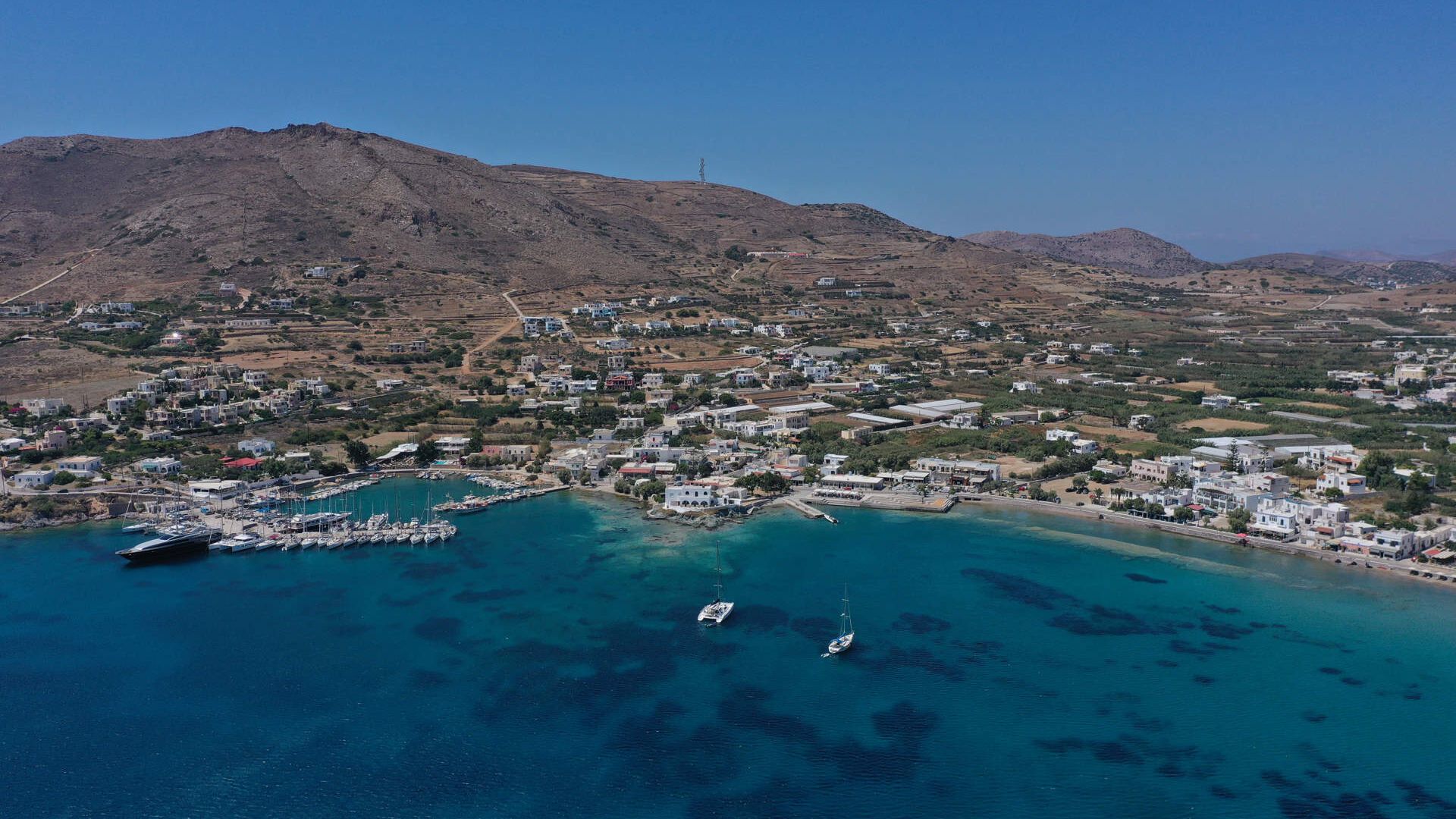 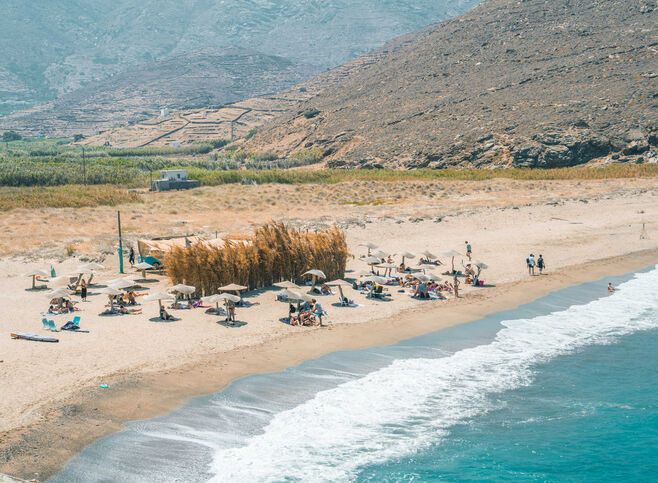 10 of the best beaches in Tinos

Tinos is a rising star amongst Greek islands, with amazing traditions and authentic villages and – you guessed it – fantastic beaches. Here are the best beaches in Tinos

This summer, we are all excited that we can travel by ferry to the Greek islands once again. So here’s a list of tips to help you have an enjoyable, easy and safe ferry trip in Greece during the Covid-19 era.
SEE ALL
DESTINATION