A tour of the Monastery of Arkadi in Crete

The Arkadi Monastery, near Rethymno, is a handsome example of Renaissance architecture from Crete’s Venetian rule, but it also hides tales of extraordinary sacrifice during the revolution against the Ottomans 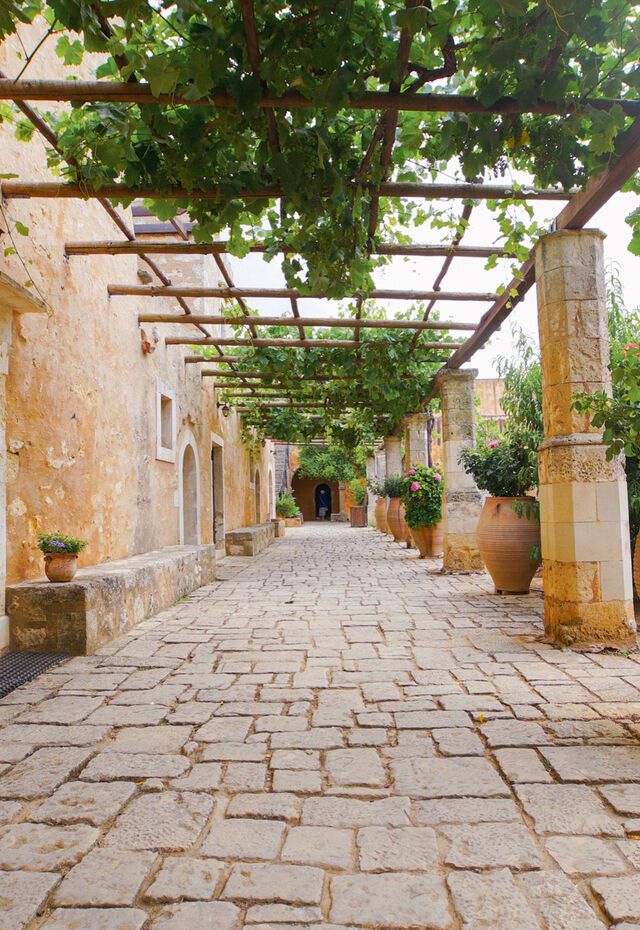 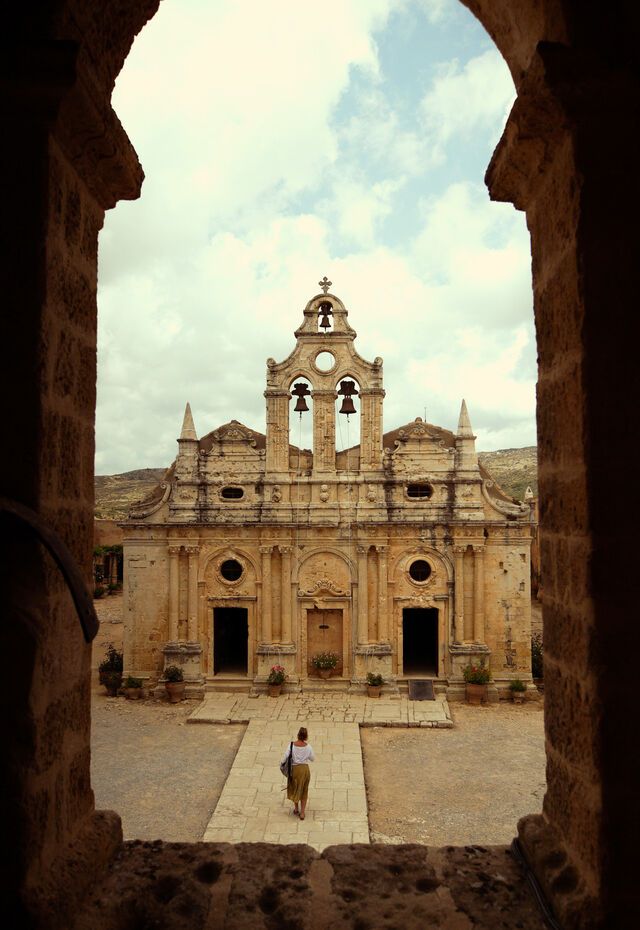 View on map
Duration
1 hour
Season
All year round

Just 23km east of Rethymno, on a fertile plateau on the slopes of Mt Psiloritis, the Arkadi Monastery has an architecture and history that will captivate you. Several versions exist as to how it was founded, including the most prevalent that it was named after a monk named Arkadios who established a monastery made up of a small chapel and a few cells in the 11th century AD.

The current fortress-like structure (it’s referred to as a monastery-castle) was completed in the 16th century AD and a handful of monks still live in the cells and continue its work.

The Arkadi Monastery has a rich history. During the 16th and 17th centuries, it served as a centre of learning and copying manuscripts in Crete, and it housed a gold-embroidery workshop whose fabrics and vestments were sold to churches and monasteries around the world.

But most importantly, the monastery is a symbol of freedom and sacrifice, with Greek and international artists such as Theodoros Vryzakis and Giuseppe Lorenzo Gatteri creating masterpieces depicting the heroics of the 964 rebel fighters, women and children who barricaded themselves inside the convent while under siege by the occupying Ottomans in 1866, finally setting the gunpowder depot alight rather than surrender to the enemy.

The monastery is open to the public, welcoming visitors and pilgrims, as well as visitors who choose to stay overnight in its cells. If you are in or near Rethymno during your holidays in Crete, a visit to the monastery is a must, if only to feel its unique aura. 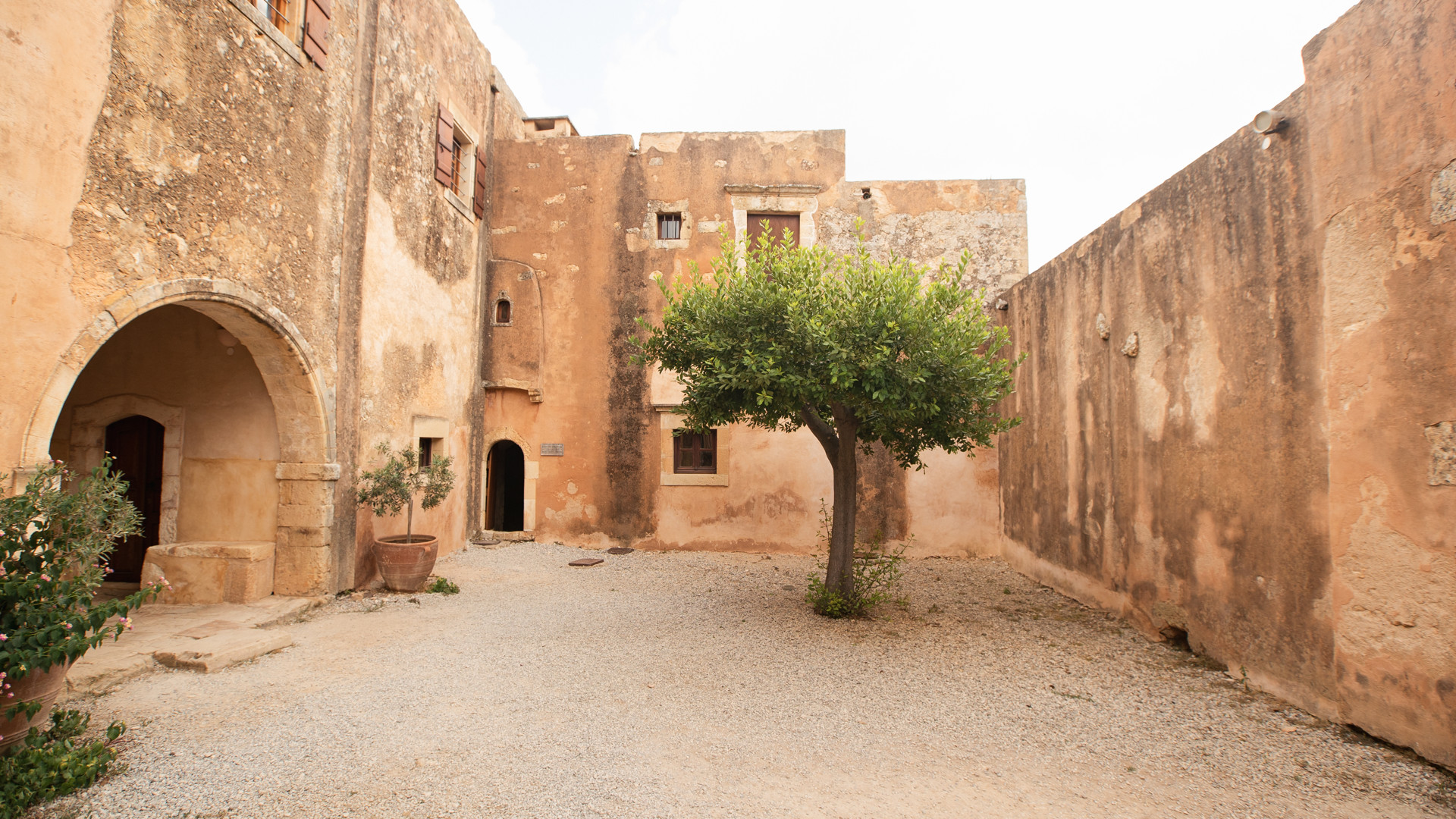 Every corner of the Arkadi Monastery has a different feel 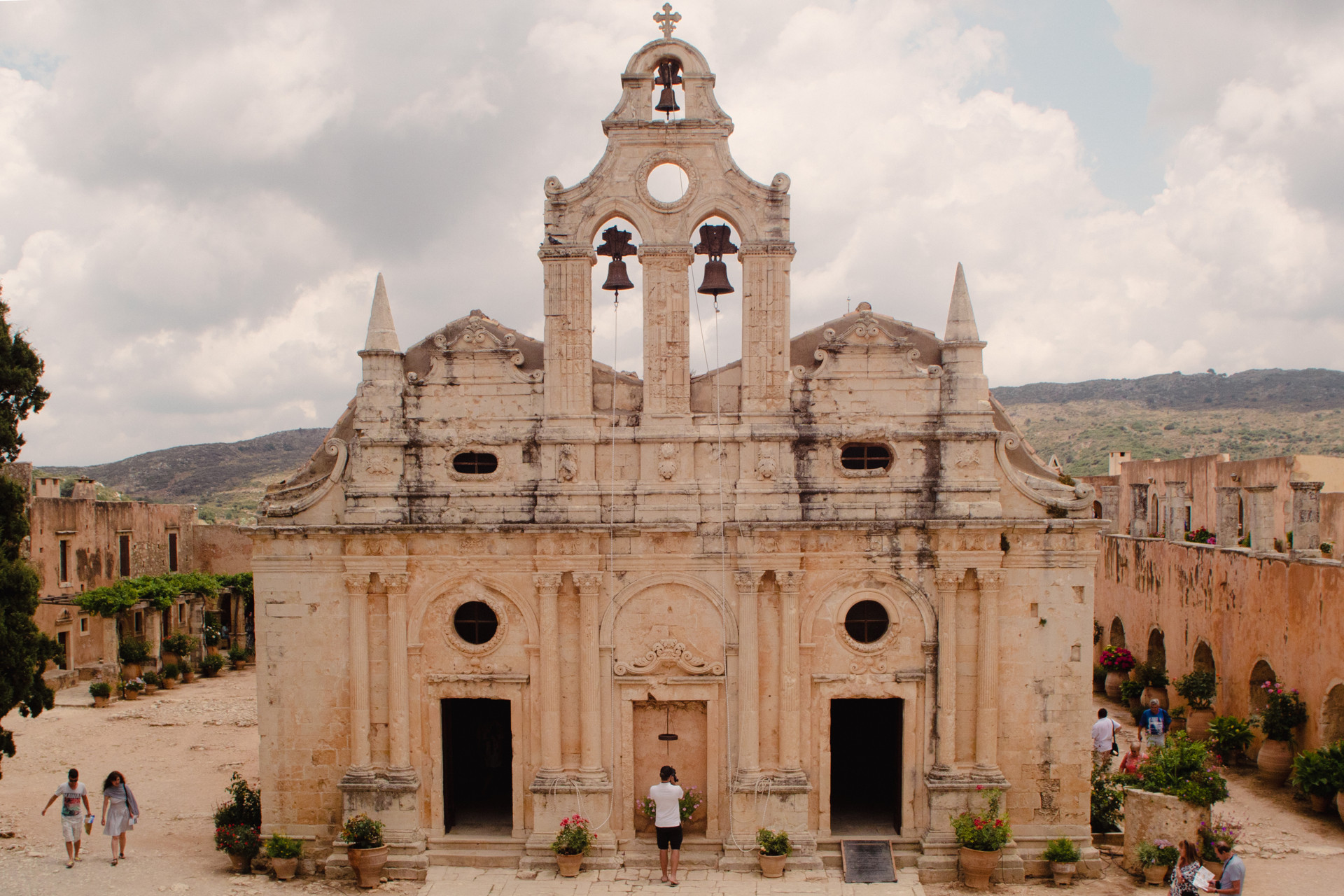 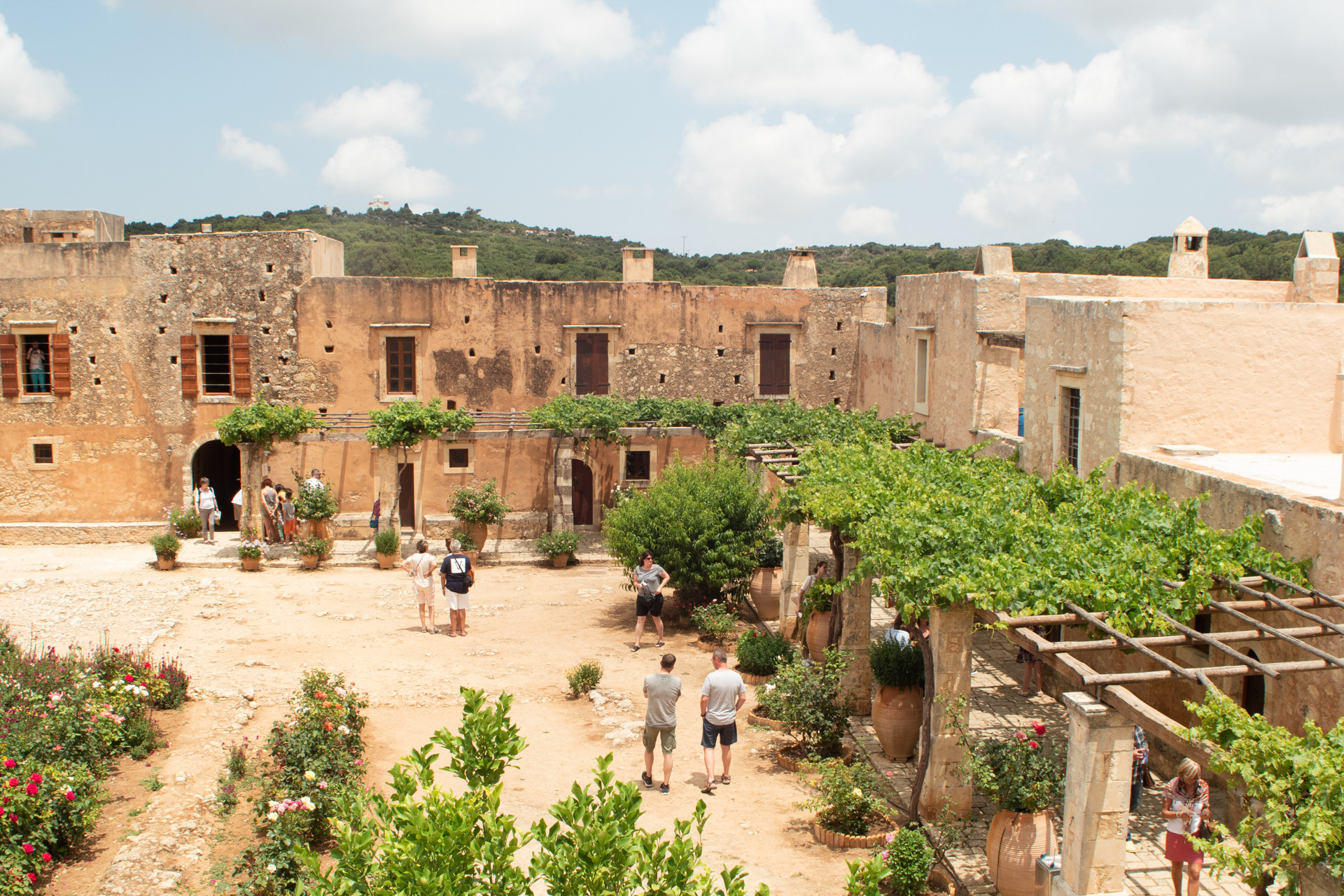 With a fortress-like structure, Arkadi is referred to as a monastery-castle 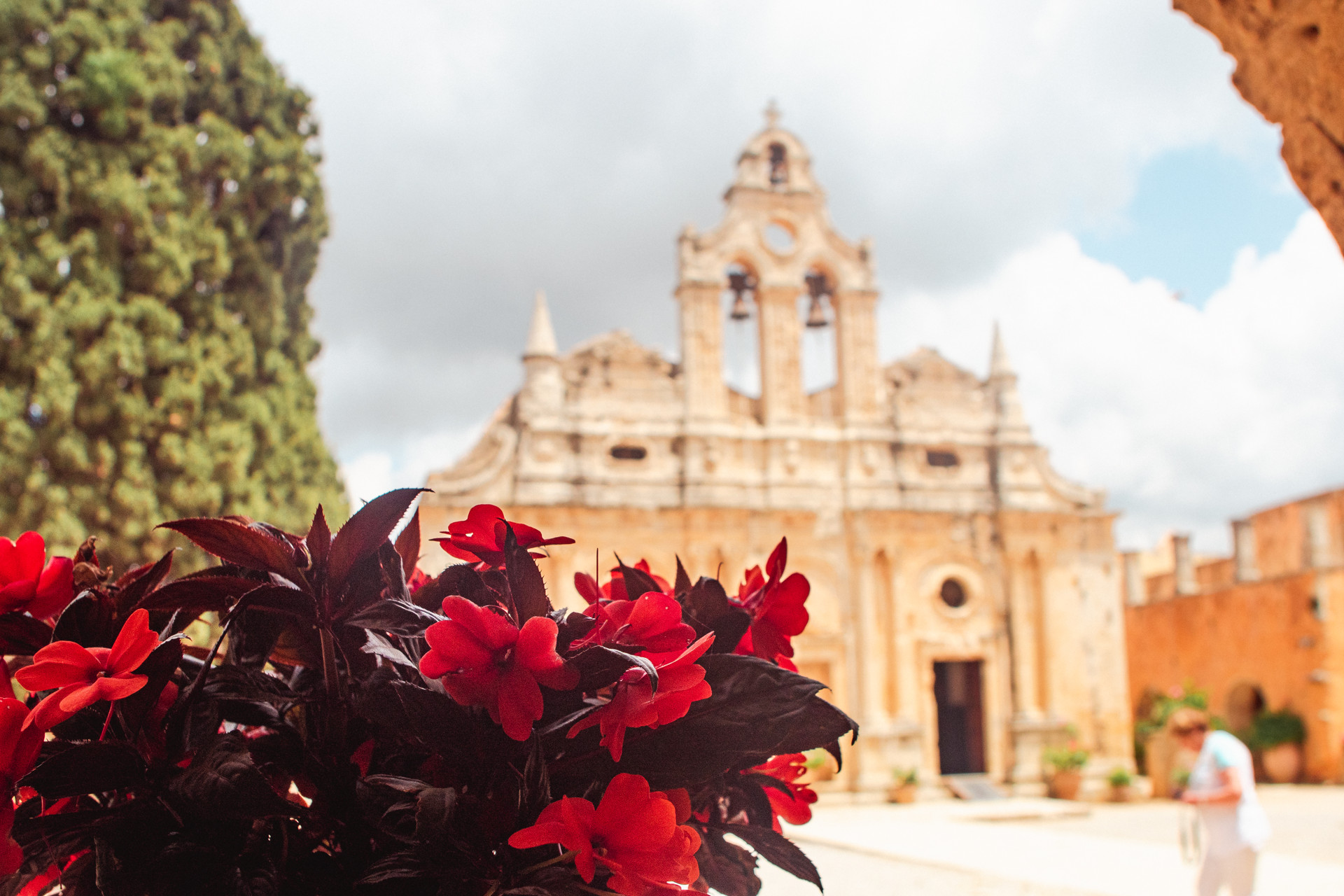 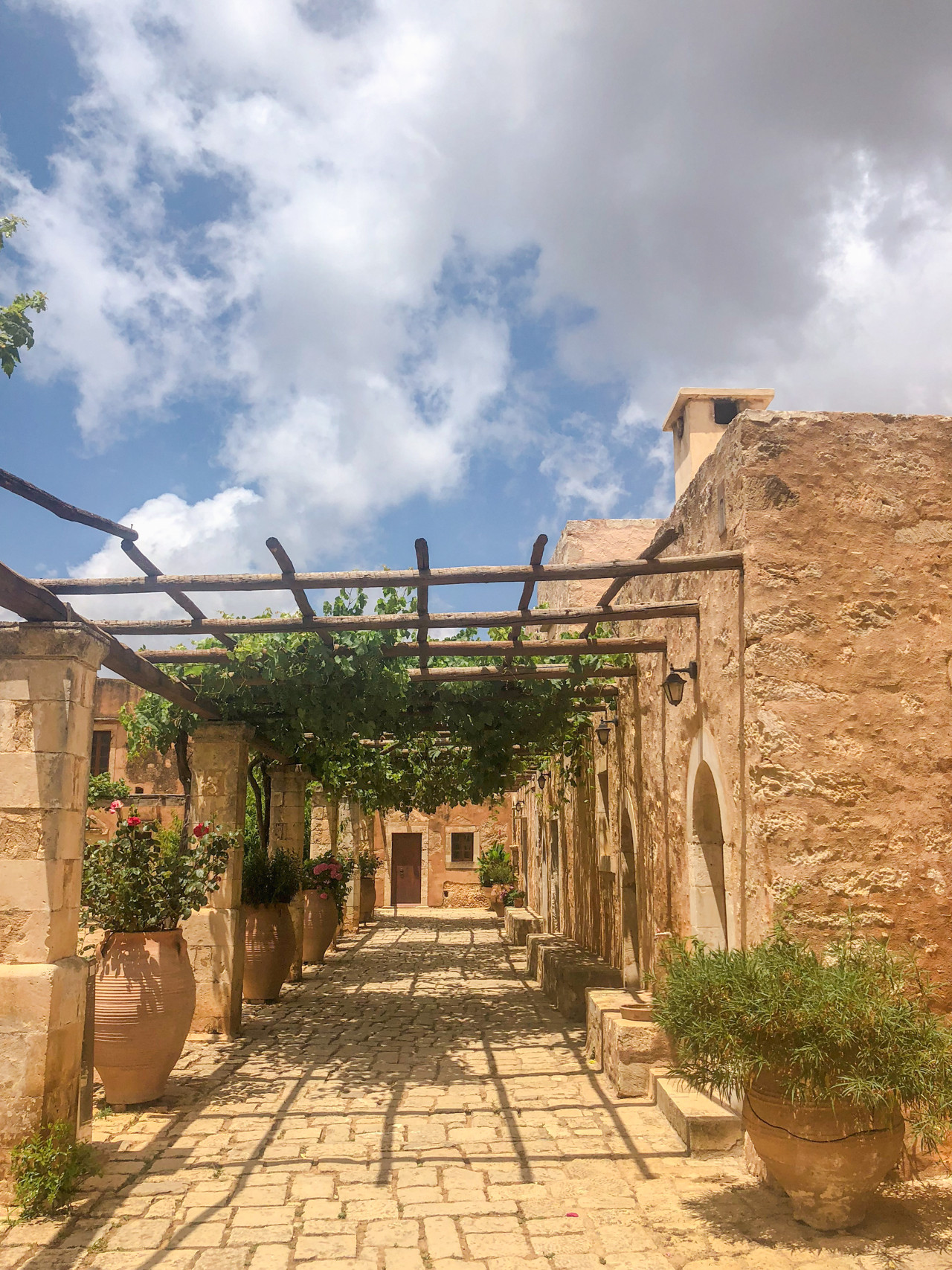 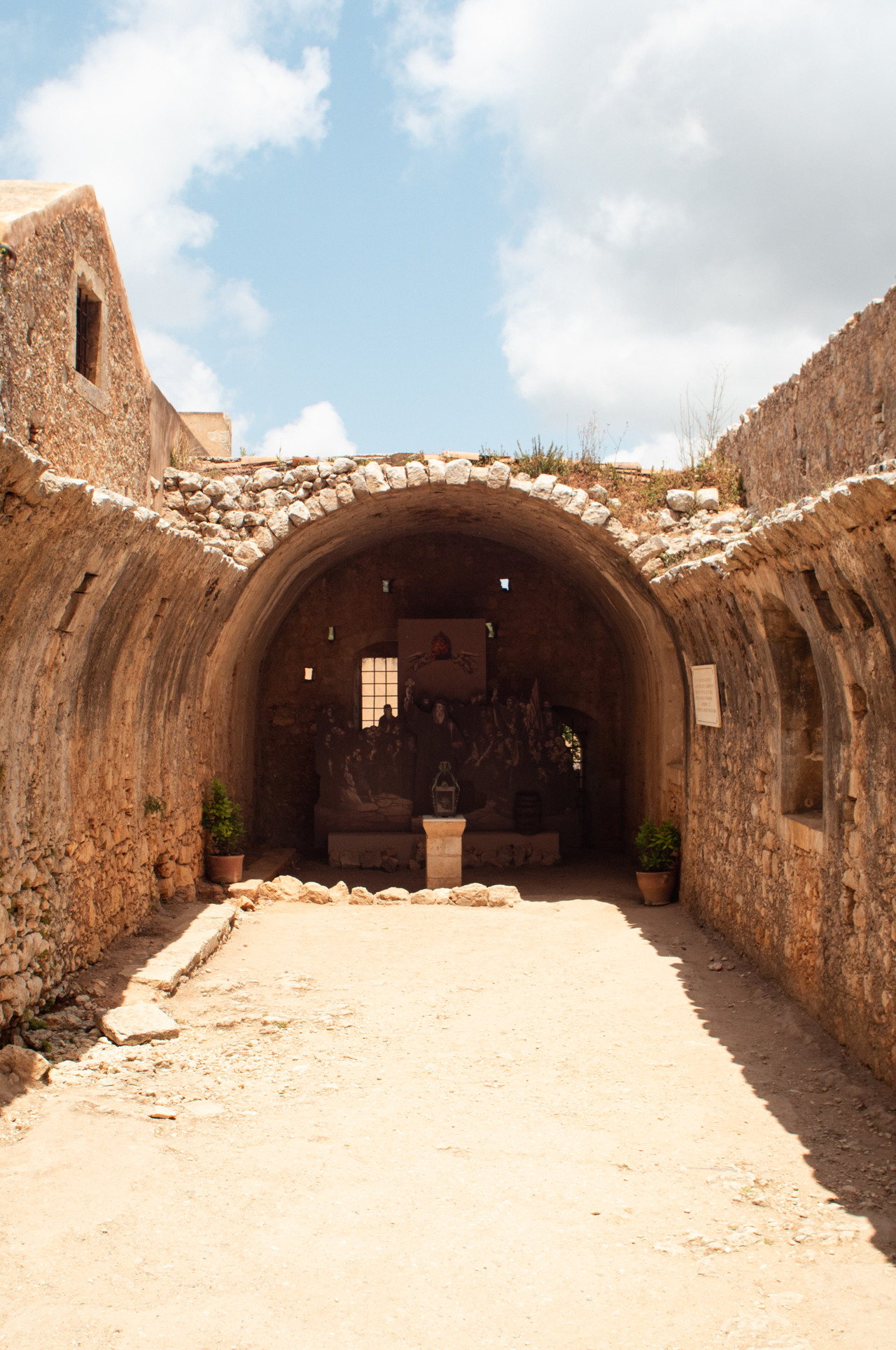 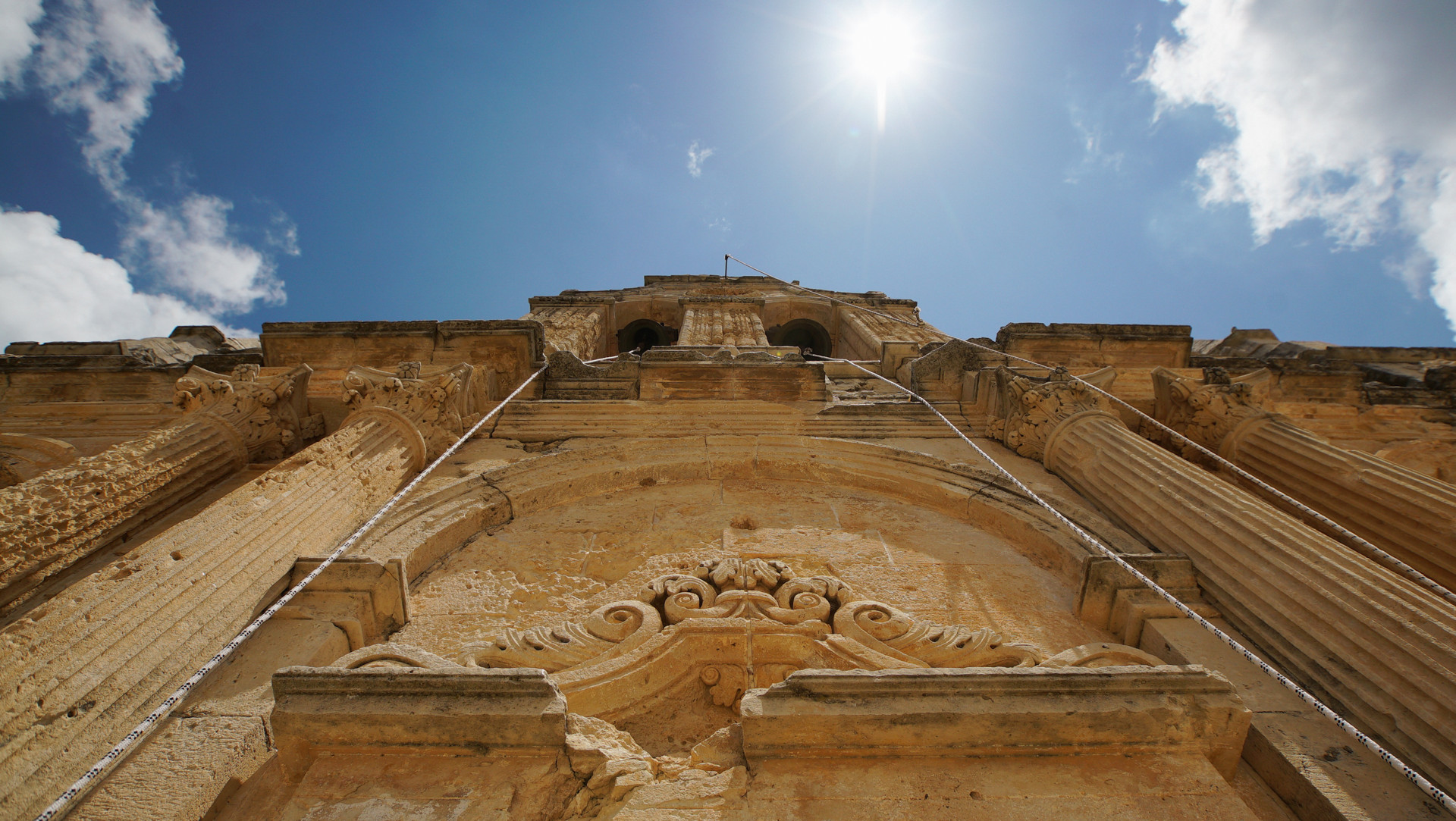 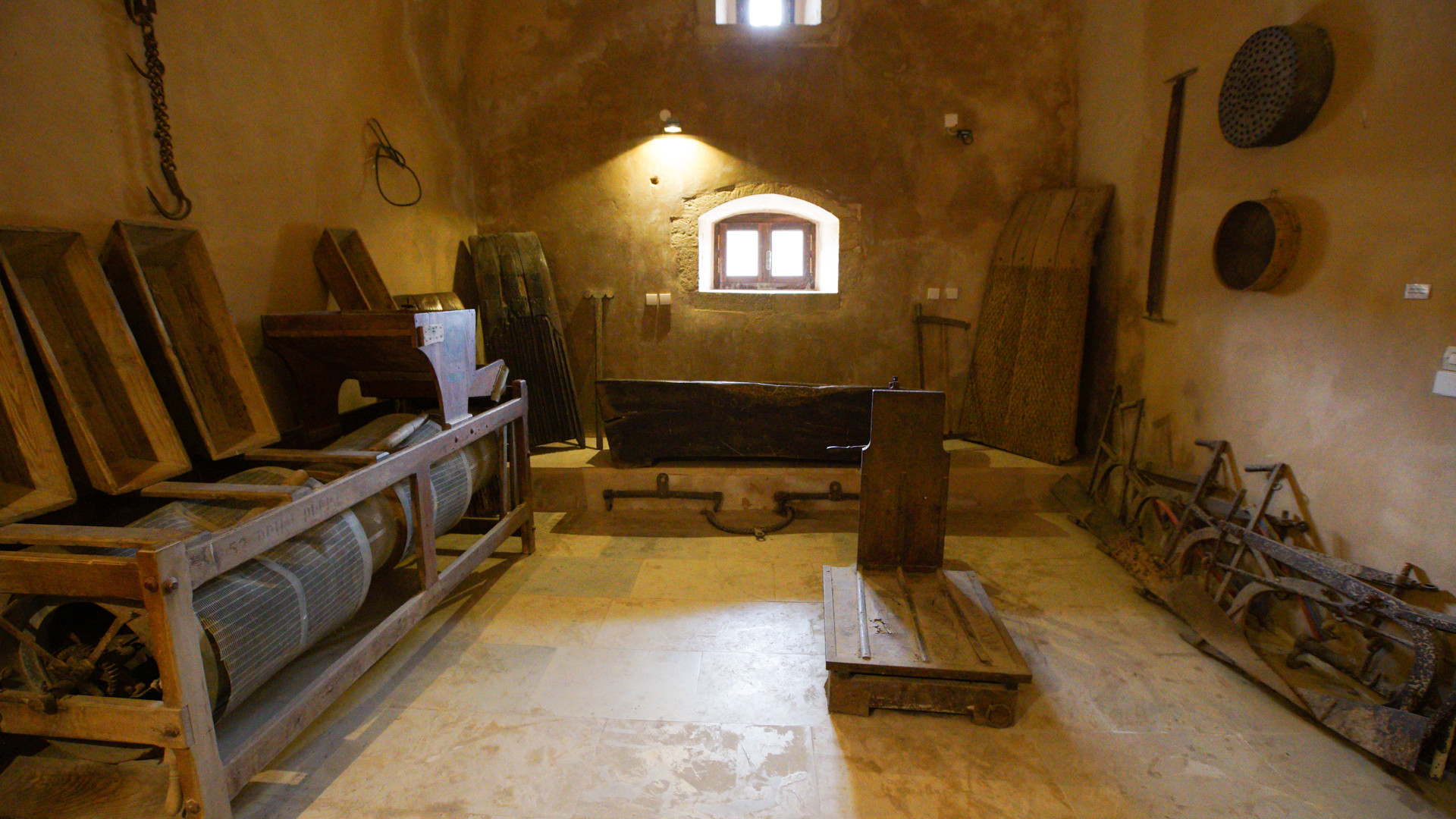 Agricultural equipment of the monks of the Arkadi Monastery 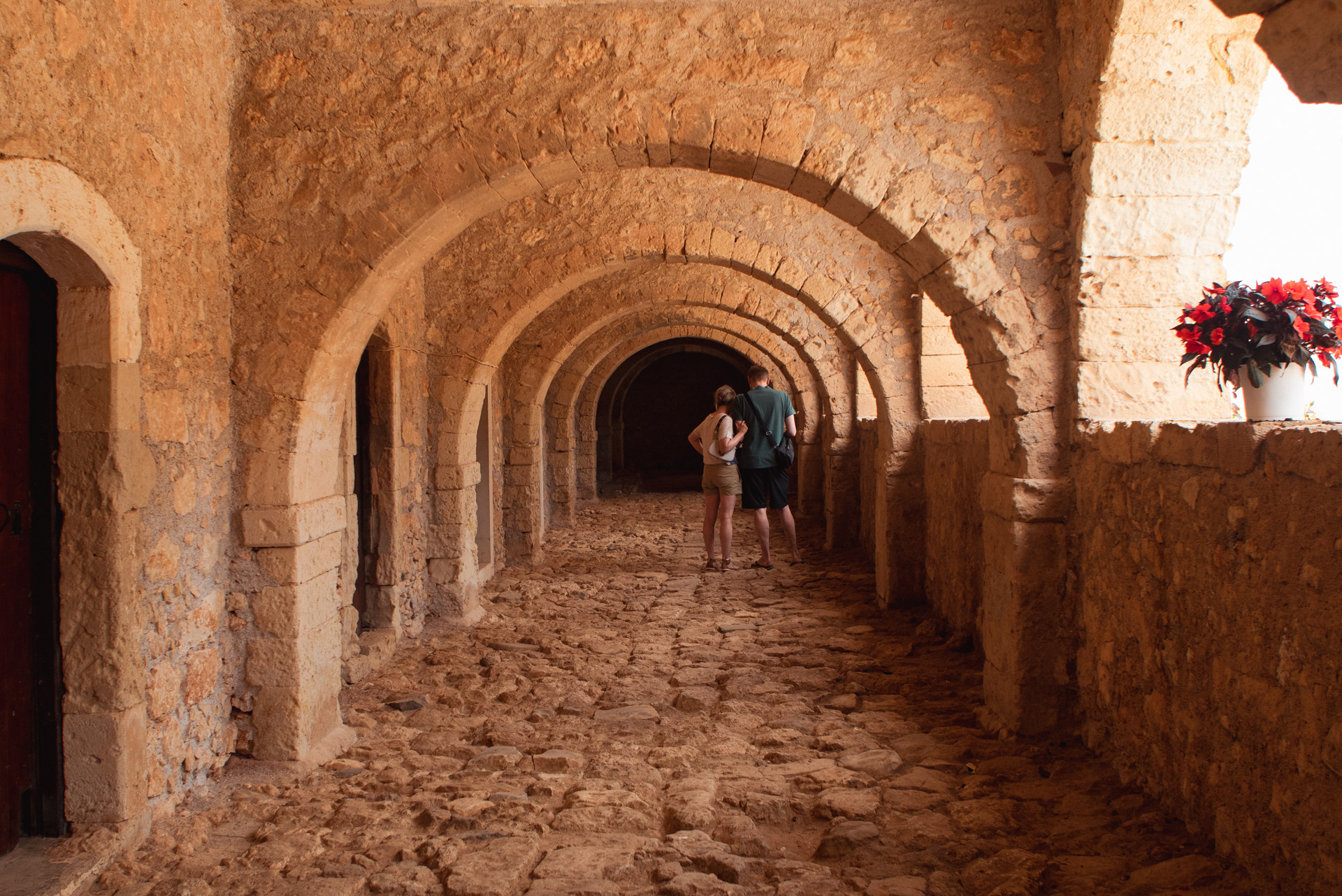 Prayer rooms and monks’ cells are found around the Arkadi Monastery 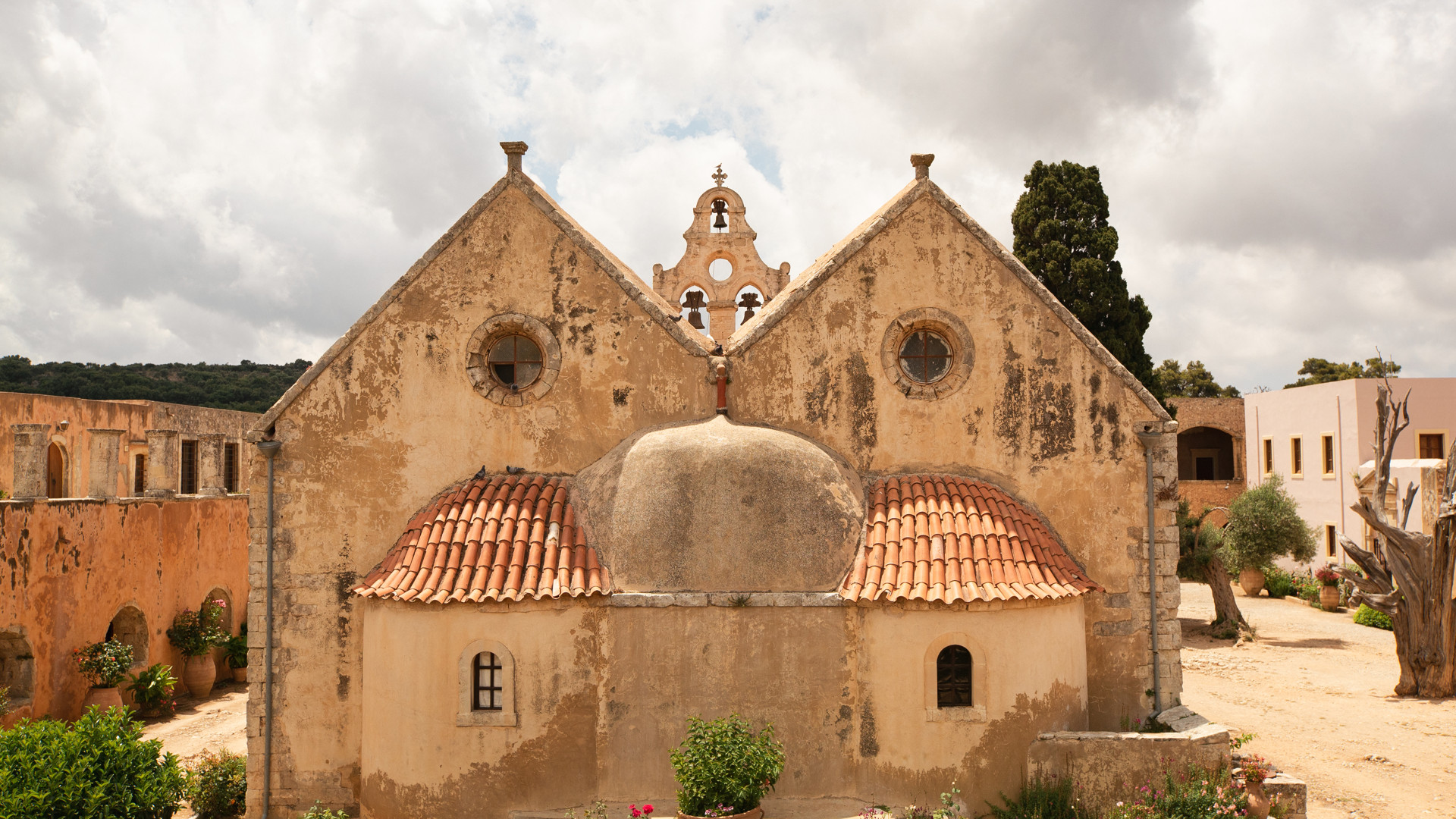 Highlights of the Arkadi Monastery

In the heart of the monastery’s central courtyard (the Atrium) is the Katholikon (as the main church of Orthodox monasteries is often called), built in 1587 on the site of a smaller church and dedicated to Saint Constantine and Saint Helen as well as the Transfiguration of the Saviour Christ. The two-aisled basilica is a classic example of Renaissance architecture, courtesy of the Venetian presence in Crete at the time, and specifically influenced by the grand architectural minds of Sebastiano Serlio and Andrea Palladio. Around the perimeter of the courtyard, you will find monk’s cells and storage spaces.

The Dining Hall is an indelible part of the Arkadi Monastery’s history. Built in 1687 on the north side of the monastery, it hasn’t changed since and is best known as the location of the massacre of 1866 when 36 young men were killed by Ottomans. You can still see some marks from bullets and swords on the wooden tables and chairs.

The Gunpowder Depot was a domed, oblong structure that was destroyed by the explosion of 1866. The only part that remains intact now houses a wonderful painting by the artist Maravas, who was inspired by Theodore Vryzakis’ famous painting The Monastery of Arkadi, now kept at the National Gallery with a commemorative inscription about the event known as the Holocaust of the Arkadi Monastery.

Close to the west gate, the Museum houses artefacts that trace the long history of the Arkadi Monastery, including manuscripts, holy fabrics and vestments, post-Byzantine icons and Greek Revolution-era weapons.

The Gallery houses artwork by older and more recent artists, who were inspired by the sacrifice during the siege, and other works depicting the historical and spiritual journey of the monastery through the centuries.

Group
Discover the long kept secrets of wine and olives and Cretan tastes as you travel through Cretan villages in a semi private group of 6-8...
Group
Discover the secrets of wine, olives and Cretan tastes in a premium semi private safari tour introducing you to the daily Cretan life style and...
Group
Combine a unique safari tour in the White Mountains of Crete and take in the most incredible panoramic views, visit traditional Cretan villages, learn the...
EXPLORE ALL

How do you get to Arkadi Monastery from Rethymno and Chania?

How do you get to Rethymno from the airport?

When is the best time to visit Arkadi Monastery?

Discover Greece tip: If you go in July and August, morning or late afternoon is best.

Use the bins provided or, if need be, take your rubbish with you.
If there’s a “No flash photography” sign, please respect it. It’s to protect the monuments and museum exhibits.
Use a refillable water bottle to try to minimise your use of plastic.
No pets (other than guide dogs) are allowed in cultural sites.
Respect your fellow visitors and the monks.
Smoking is prohibited.
Read More Read Less