Spreading from its Venetian harbour through a maze of alleyways and lively streets, Rethymno Old Town contains all the life, history and traditions of Crete’s third-largest city 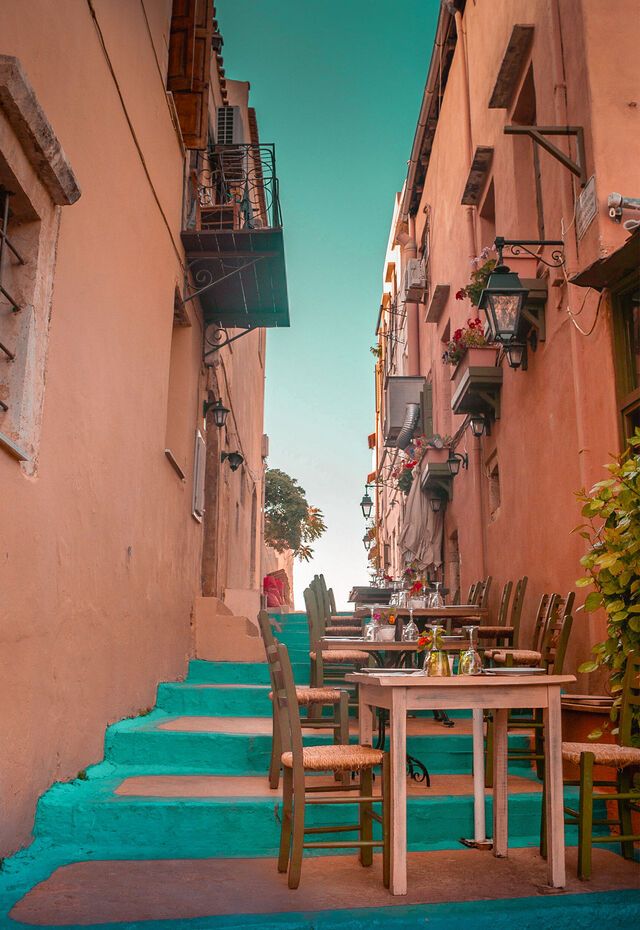 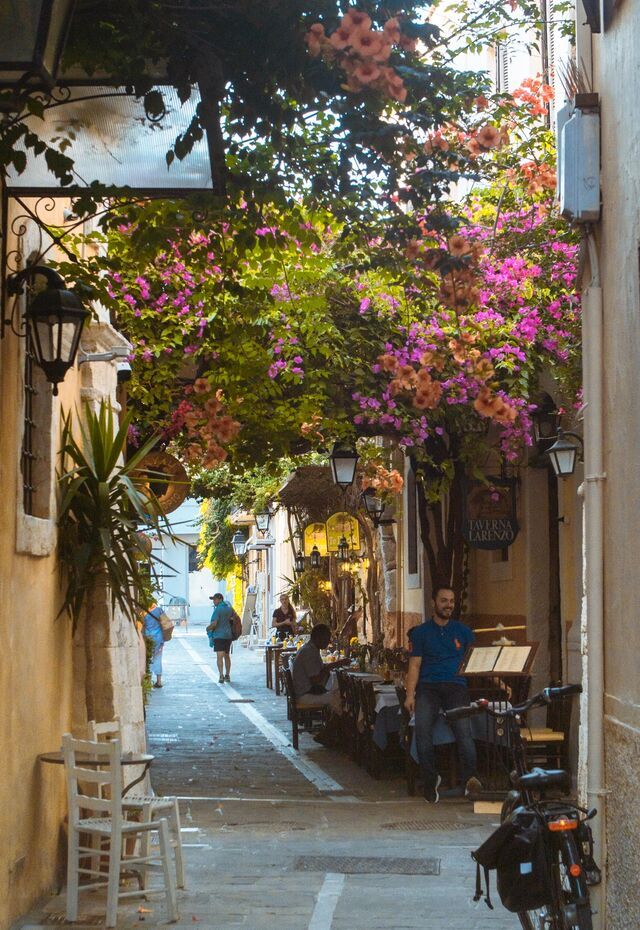 Sometimes Venetian, sometimes Ottoman but always unmistakably Cretan, Rethymno’s Old Town hides its secrets in plain sight. A walking tour takes you through the original settlement of the city located on Crete’s northern coastline, midway between Chania and Heraklion, introducing you to its distinctive buildings, street markets, narrow alleyways and historical monuments.

You’ll understand how the Old Town grew into Crete’s third-largest settlement, spreading from the harbour in around 1300, and appreciate how it has retained its intimacy and colour despite its growth, with little bars, cafes and concept stores opening in refurbished buildings. In many of the tavernas, you can enjoy traditional Cretan food and music.

Rethymno is one of Crete’s best-preserved settlements. Look out for the ornate doorways decorated with Venetian crests, Ottoman mosques with minarets and the wooden facades of mansions all vying for your attention – before you emerge at the waterfront by the iconic harbour.

Read More Read Less
See the gallery
The heart of the historic centre of Rethymno, filled with shops with local products, cafes and tavernas 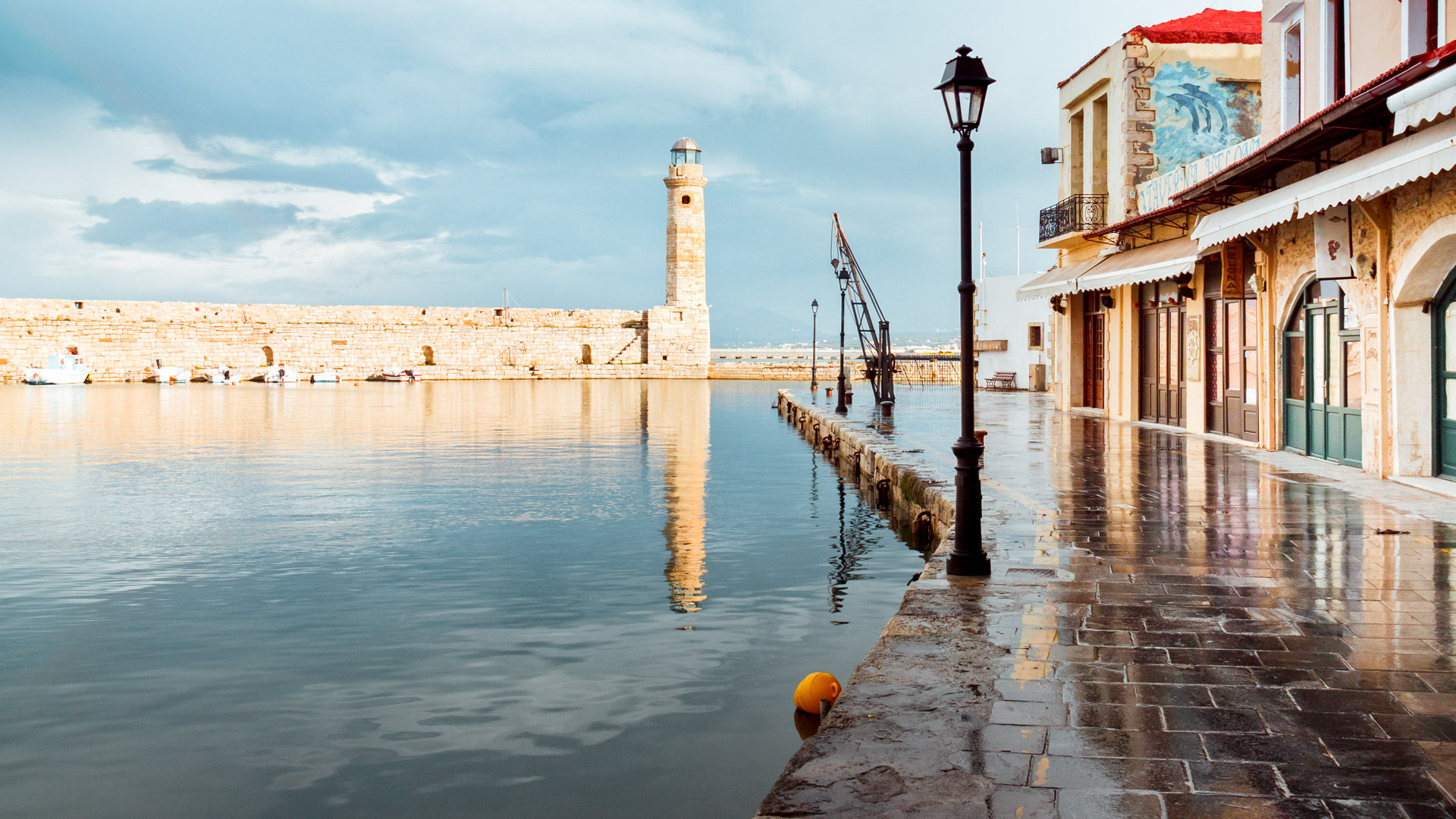 The Venetian harbour and the lighthouse in Rethymno 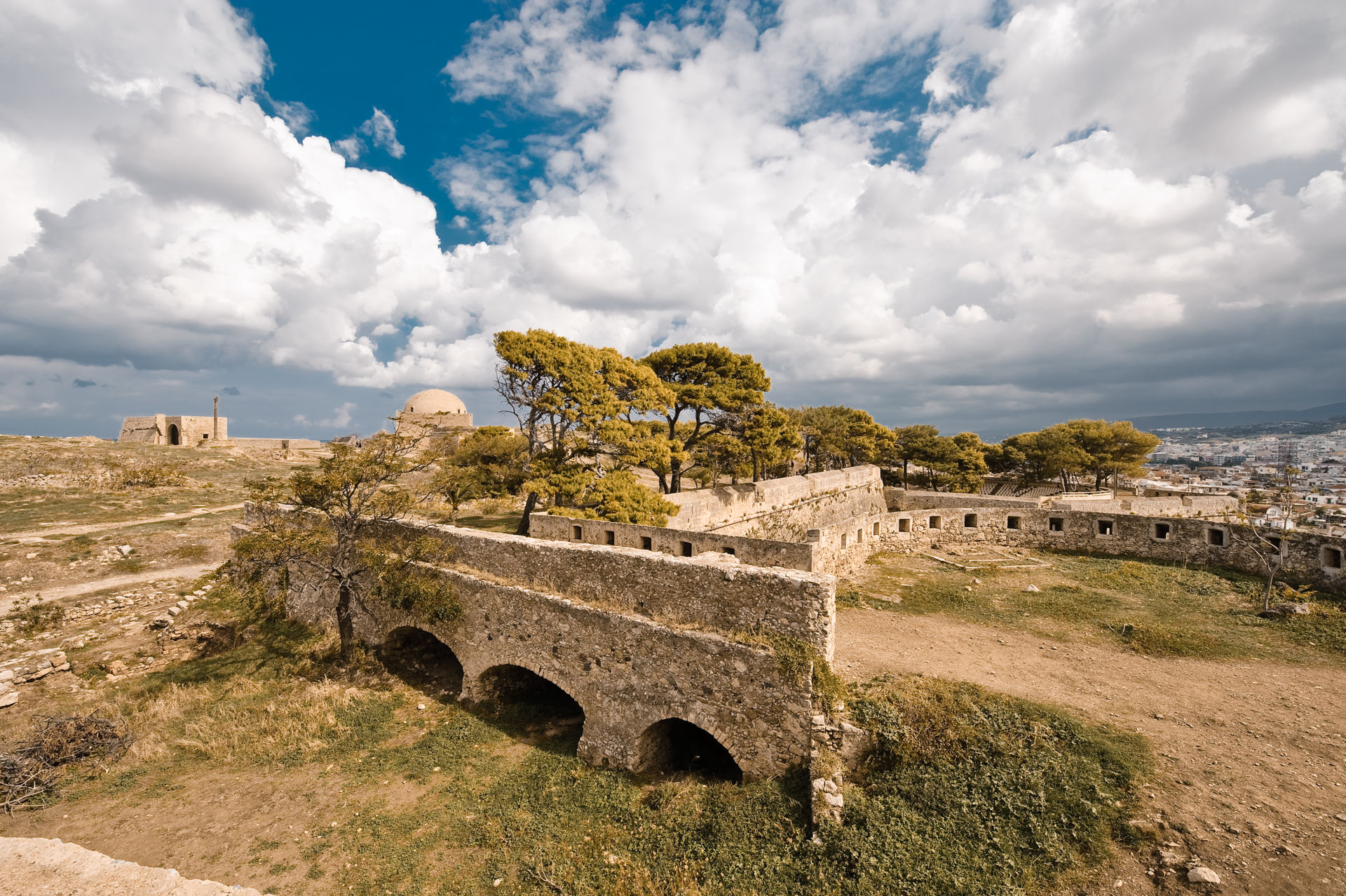 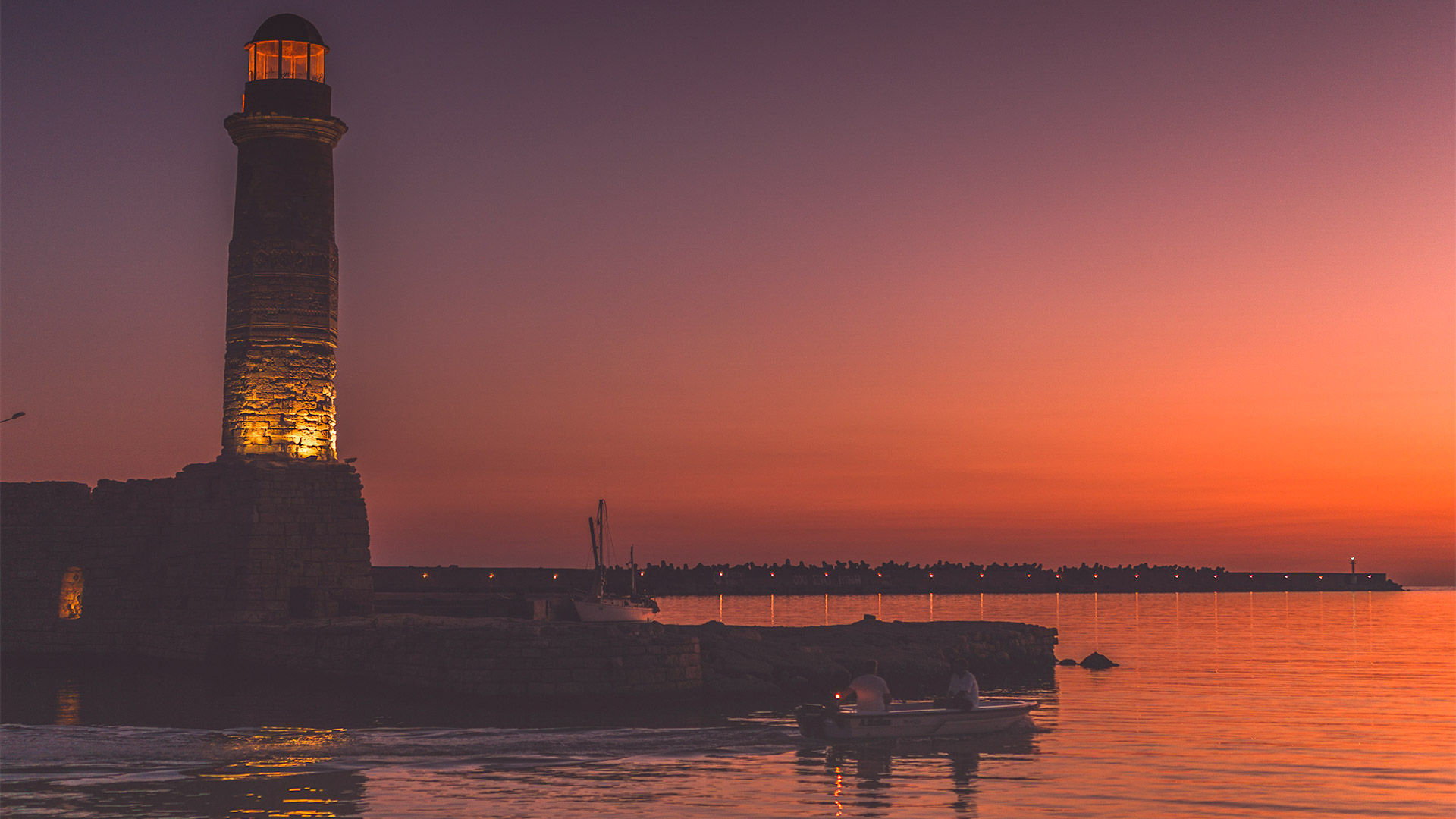 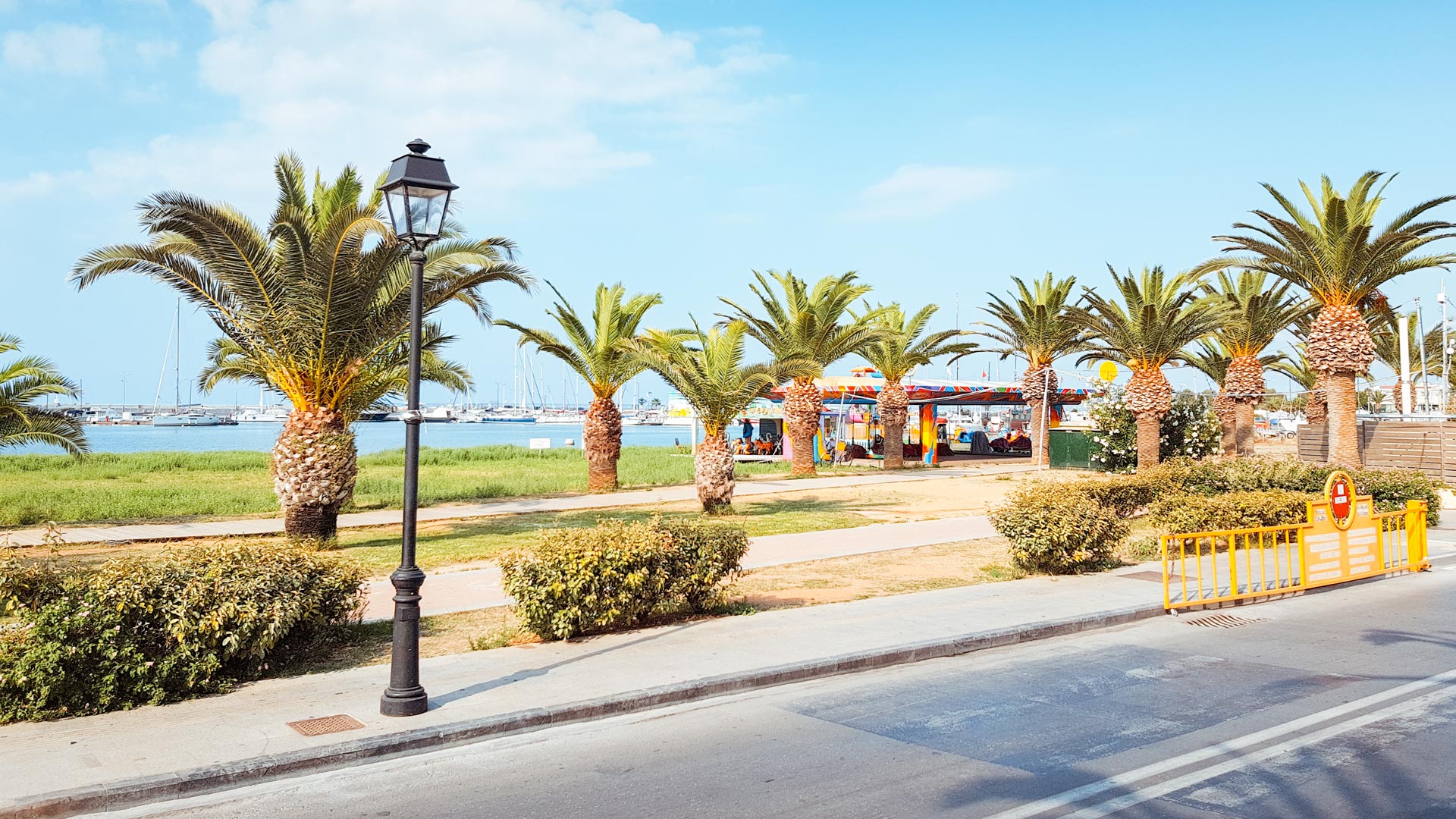 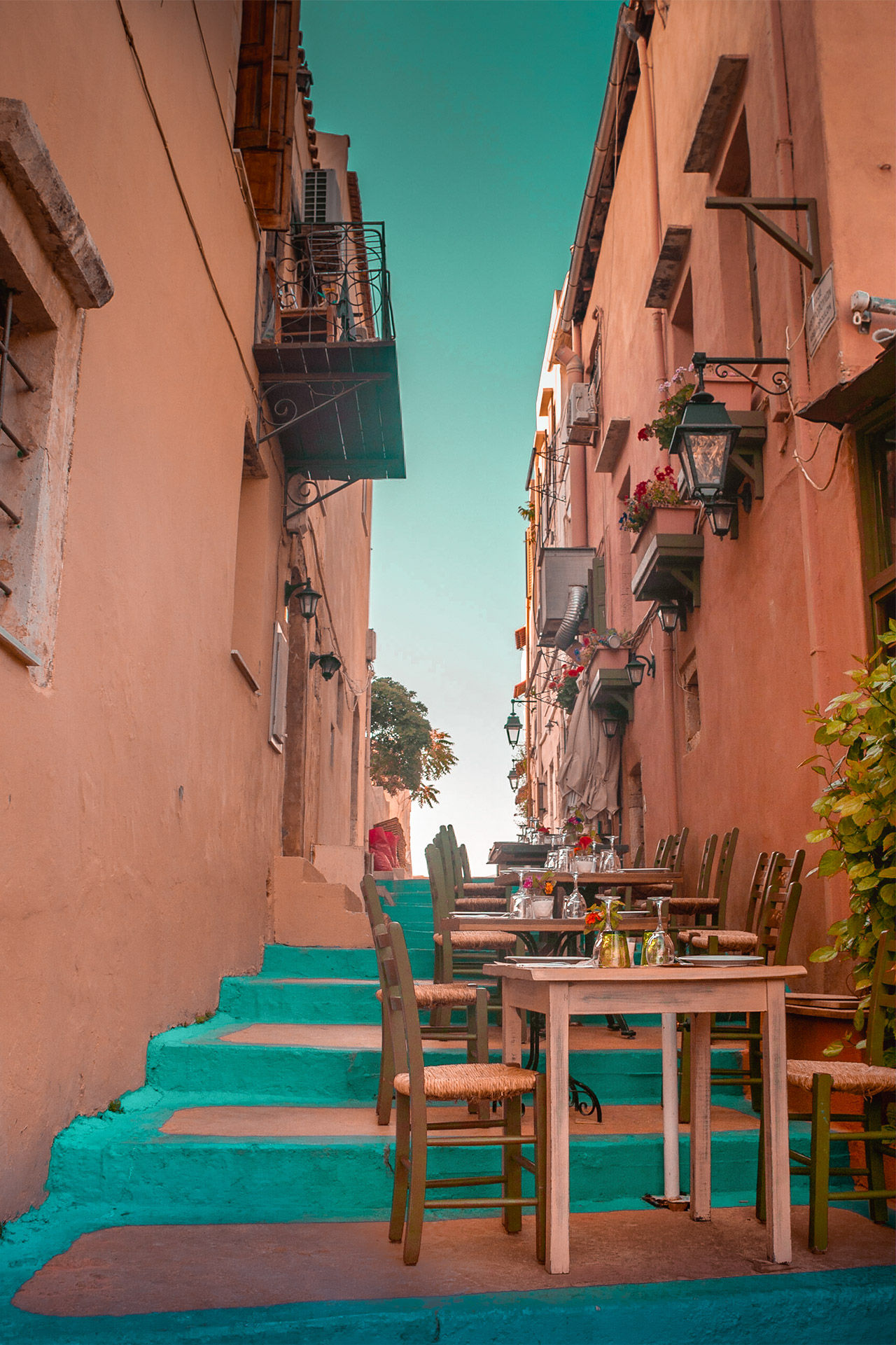 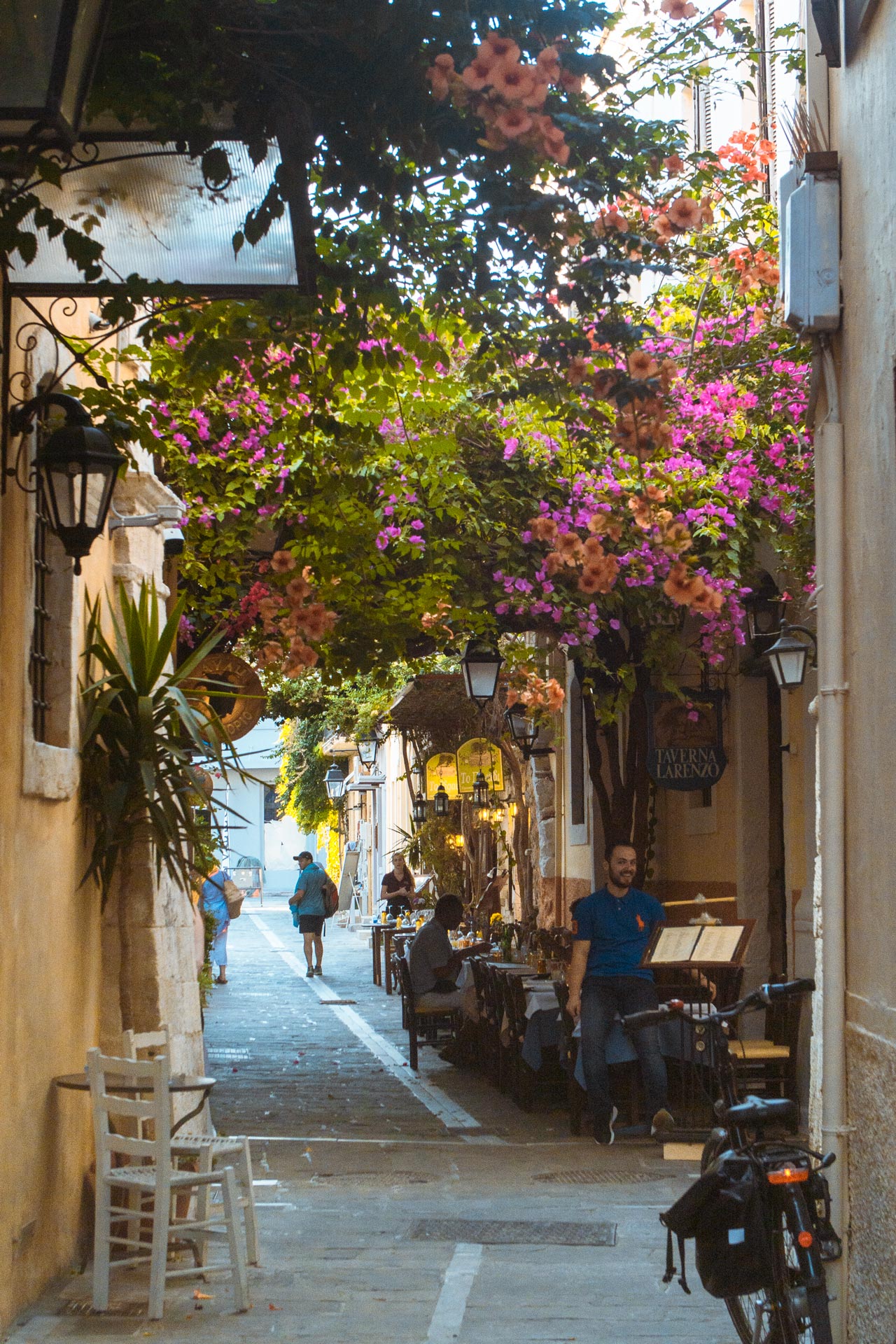 Taking a walk through the original settlement of Rethymno, is to relive its past through distinctive buildings and atmospheric alleyways 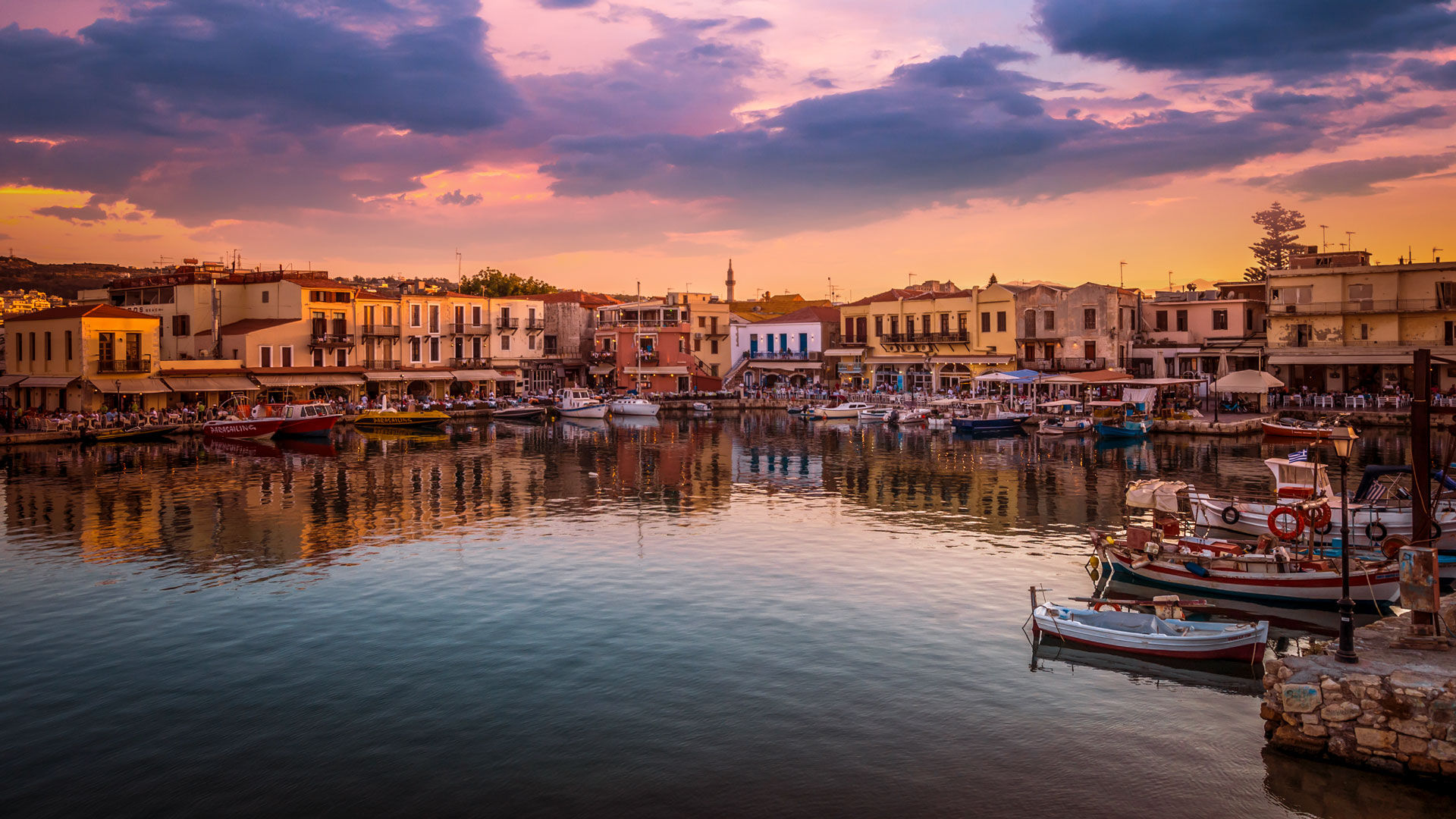 The Venetian Harbour of Rethymno, is the ideal place to enjoy fresh fish in a seaside taverna

The archway of the Guora Gate – also called Megali Porta (Big Gate) – marks your entry into the old town. It was the central gate to the once fortified city and is the only surviving section of the protective walls introduced in the 16th century. From here, you amble down Ethnikis Antistaseos Street, which morphs onto Platia Mikrasiaton and is the heart of the historic centre, filled with shops with local products, cafes and tavernas. It’s worth having few suggestions for traditional Cretan dishes up your sleeve: Kaltsounia (cheese and herb pies), Gamopilafo (‘Wedding’ pilaf with goat or rooster), Tsigaristo (slow-cooked lamb), hochli (snails), Apaki (cured pork) and Boureki (courgette and potato pie).

The Church of Agios Frangiskos

Continuing down Ethnikis Antistaseos, you arrive at the basilica of St Francis, built by the Venetians as a Franciscan Friary church. Stop to appreciate the Renaissance touches of the intricate doorway. The building now houses Rethymno’s Archaeological Museum.

A little further along you arrive at Neratzes (or Gazi Hussein) Mosque and its towering minaret. It was the Venetians’ Church of Santa Maria (belonging to the Augustine Monastery) before being converted by the Ottomans in the 17th century with the addition of three domes, but it has retained its original elaborate entrance. Today it functions as the Municipal Odeon.

The Historical and Folklore Museum

You’ll enjoy walking around this 17th-century Venetian mansion and the collection of traditional handicraft and folk art that it contains. The museum also serves as a research centre for the preservation of Cretan Folklore culture.

The three lion heads of this ornately decorated fountain still spill water into their basins, as they did when the Venetians built it in 1626 on the site of a former Roman fountain. The inscriptions of ‘LIBERALITATIS’ and ‘FONTES’ were an invitation to the 17th-century population to drink freely from the fountain.

Originally open and covered with a wooden roof, the Loggia was a meeting place for Venetian nobility and officials. The walls added in 1625 include handsome arches, which give it a stately air. Now owned by the Culture Ministry, the Loggia sells guide books and authenticated copies of antiquities.

The Venetian Harbour is a symbol Rethymno as it was here that the nascent city began to flourish from 1300. The original lighthouse has been replaced by one built by the Egyptians during the 1830s. This is the ideal place to enjoy fresh fish in a seaside taverna.

The harbour is also the location of Rethymno’s much-photographed 17th century Fortezza. Only a number of the buildings that once made up a citadel within its walls remain, but you will easily understand its original grandeur as one of the biggest constructions of Venetian Crete. It offers panoramic views of the city and the sea.

From here, you can end your walk with a stroll along the palm tree-lined Eleftheriou Venizelou waterfront towards the new marina. Find yourself a table overlooking the sea and order a drink. If you’re here at sunset, you’ll soon find yourself in good company. The marina has some of Rethymno’s best nightlife spots.

Group
Discover the long kept secrets of wine and olives and Cretan tastes as you travel through Cretan villages in a semi private group of 6-8...
Group
Combine some of the most unique panoramic views, visit traditional Cretan villages and find out all about the lifestyle of a Cretan shepherd by exploring...
EXPLORE ALL

Rethymno
from 102 €
BOOK NOW
VIEW ALL
Book your trip

How do you reach Rethymno?

What is the best time of year to visit Rethymno?

The ideal times to visit are April-June and September-October, when it is at its most charming and quiet.

When are Rethymno’s museums and cultural sites open?

Historical-Folklore Museum
April-October: Daily from 10:00-15:00 (except Sunday)
November-March: Only upon request
Ticket: €4 (€2 reduced)
Not suitable for visitors with disabilities

How long do walking tours of Rethymno Old Town last? 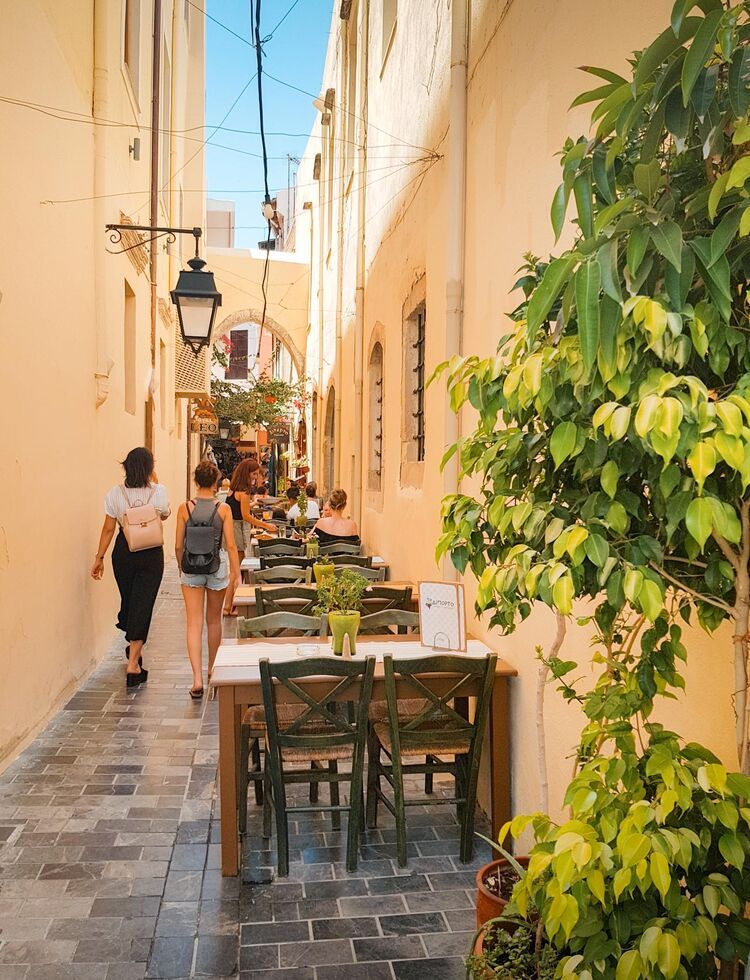 The city that’s preserved its Old Town charm
Discover It 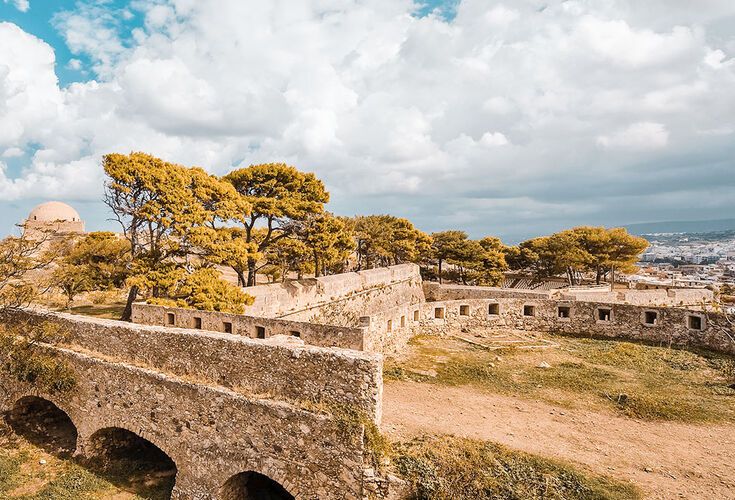