There’s been a culinary revolution in Athens. So if you’re a foodie, you’re going to love what comes next as we head into the city’s markets, delis and spice shops and discover new tastes and neighbourhoods on the ultimate Athens food tour 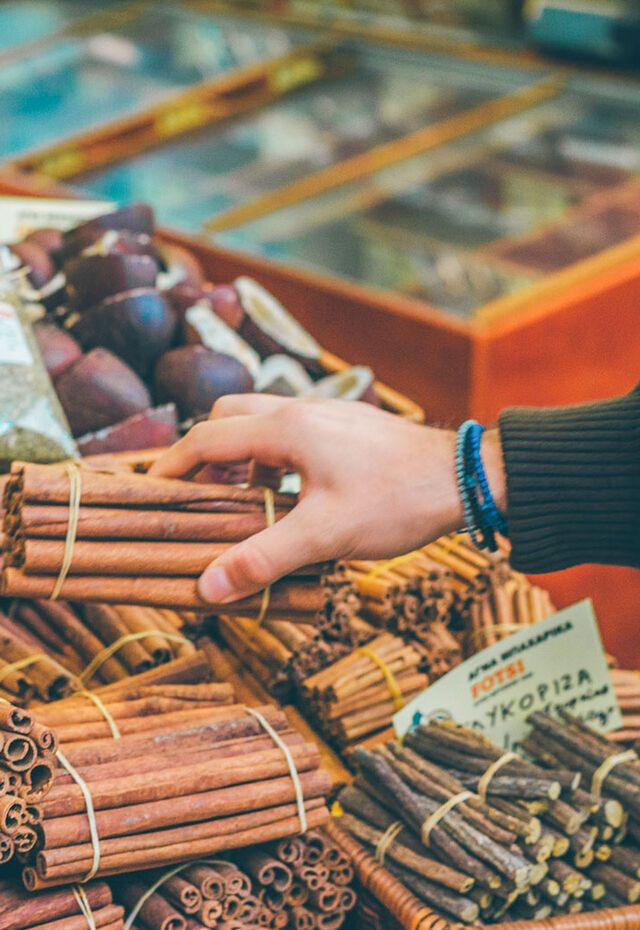 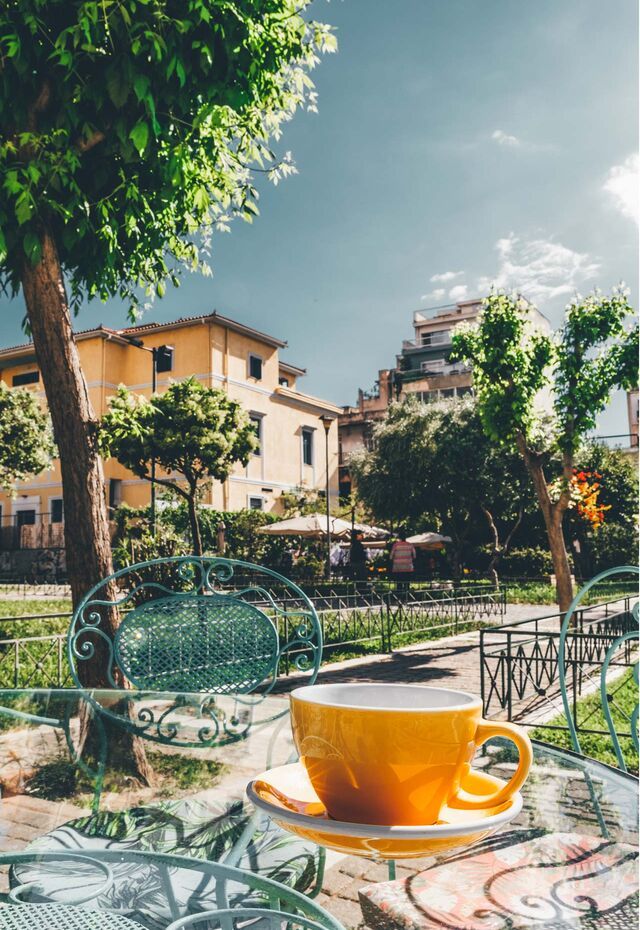 Let’s get stuck in. What can you expect on your Athens food tour? Well, you’ll recognise many of the ingredients and dishes as Greek classics but there’s nothing classical about the settings or the presentation. We’re talking about trendy meze-based bistros right up to Michelin-starred restaurants.

You’ll enjoy your favourite Greek street food (souvlaki – grilled meat on a stick or wrapped in a pita with yogurt, chopped tomatoes, onions and chips) and head into the Athens markets. And prepare yourself for unexpected newcomers to the food scene, like brunch and ethnic tastes – definitely one of the most unexpected things to do in Athens. Meanwhile, in cool new bars you’ll be introduced to Greek wines and locally-brewed beers.

An Athens food tour will introduce you to all of these and, best of all, you’ll get to meet some of the creative minds behind the great new tastes in the capital.

Entire districts that were previously unexplored by visitors are now go-to places on an Athens city break, in large part because of their newfound culinary identities: Koukaki, Keramikos, Exarchia, Psyrri, Pangrati, Petralona and Metaxourgio. You’ll be telling people about them once you’re home. And here’s another word for your holiday vocab list – koutouki – a family-run restaurant offering authentic food in a lively atmosphere.

For a seafood meal (traditional or fine dining), there are excellent choices from Piraeus  all the way up the Athens Riviera, from the Faliro Delta (just by the Stavros Niarchos Foundation Cultural Centre) along the south coast to Vouliagmeni and beyond. Meanwhile, the emergence of vegetarian or vegan restaurants is no real surprise, as all local Greek cuisines have a rich history of delicious veggie-based dishes. And how about introducing the Greek breakfast into your daily routine?

A final bonus tip on your Athens food tour is to coincide your visit with the Taste of Athens festival. Some of the best restaurants, chefs and producers are celebrated in the annual event, which has become a fixture in the calendar of Athenian foodies. 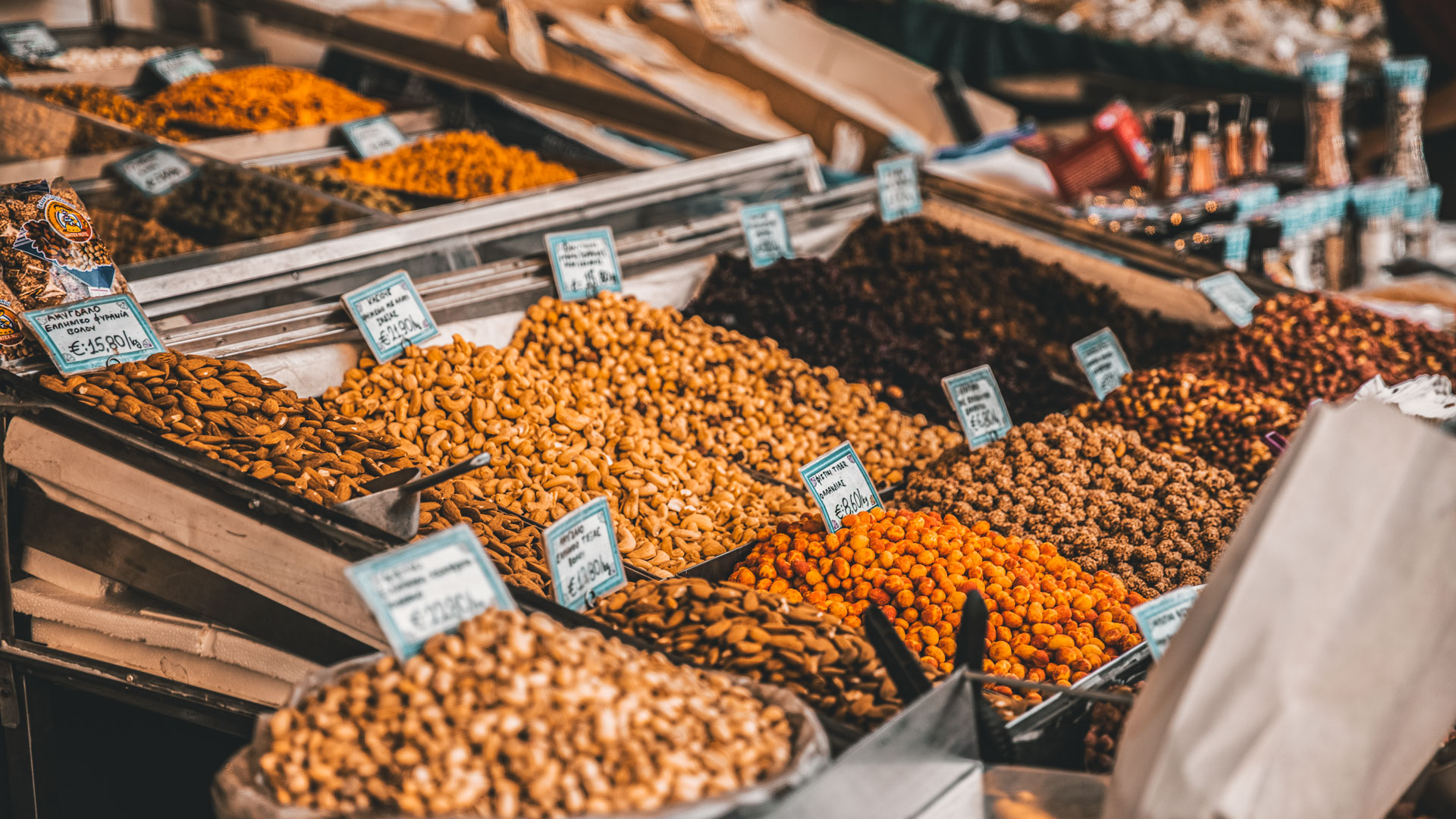 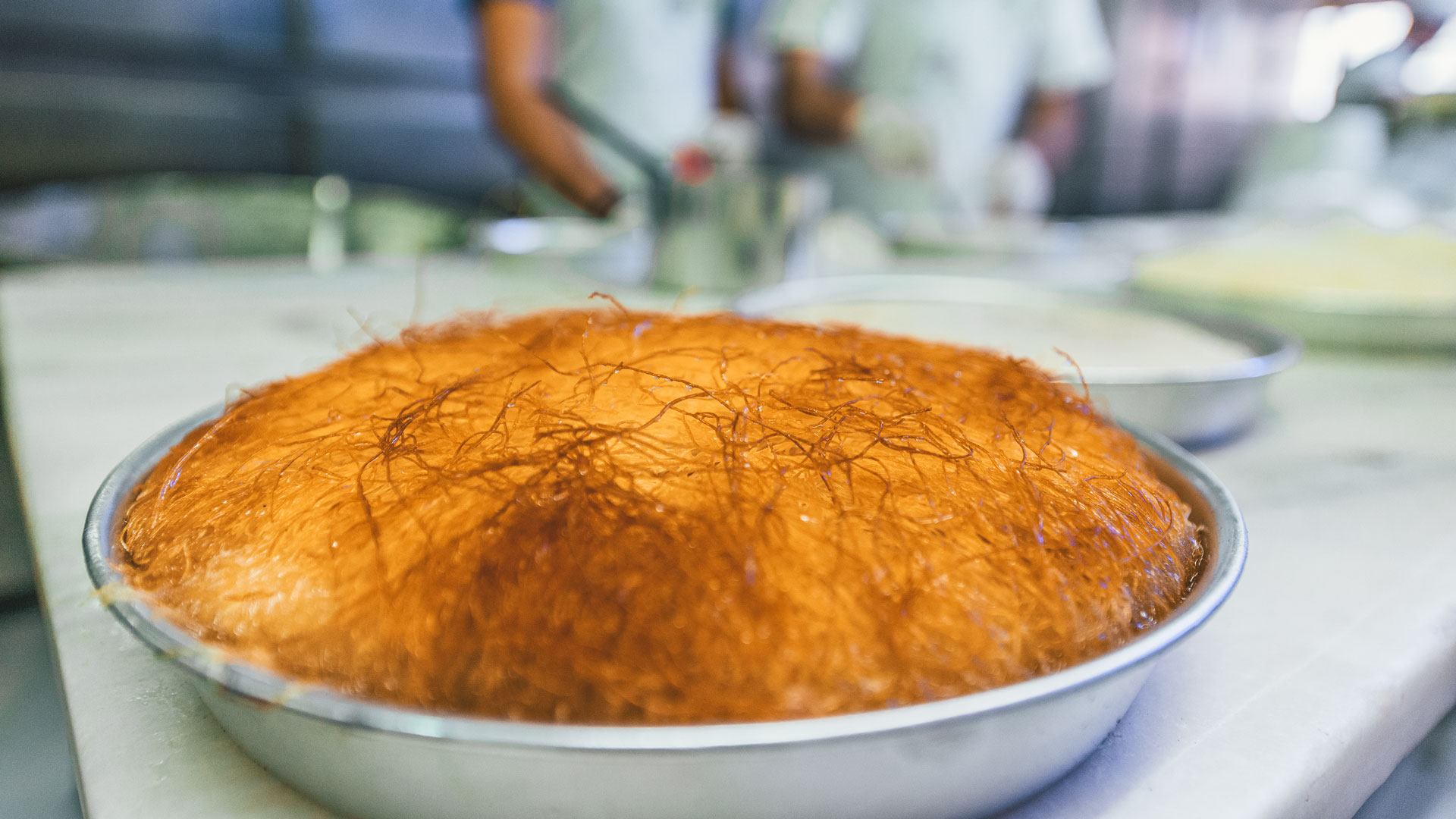 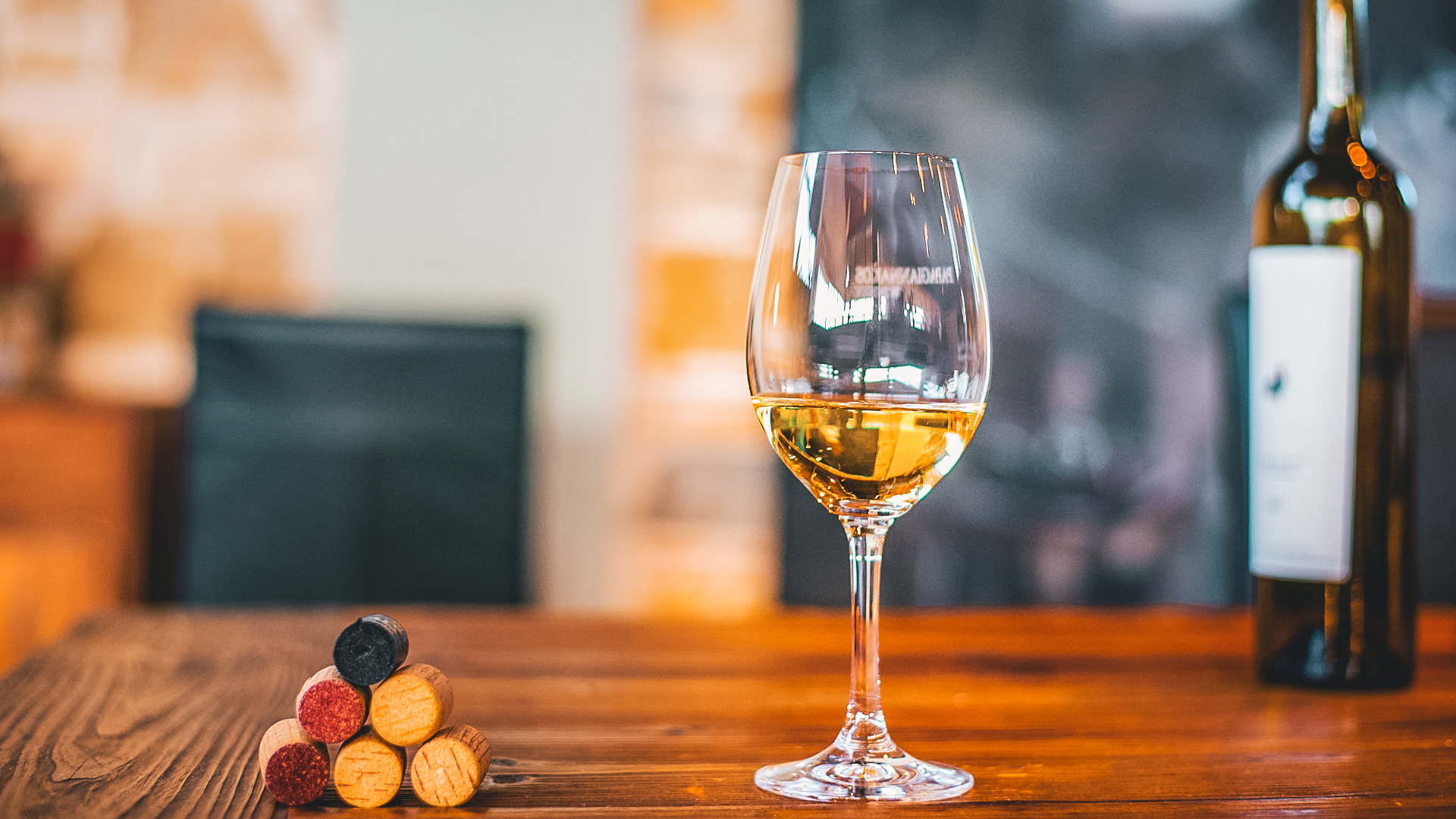 Athens boasts a dynamic wine bar scene, offering a wide range of Greek and foreign wines for all tastes 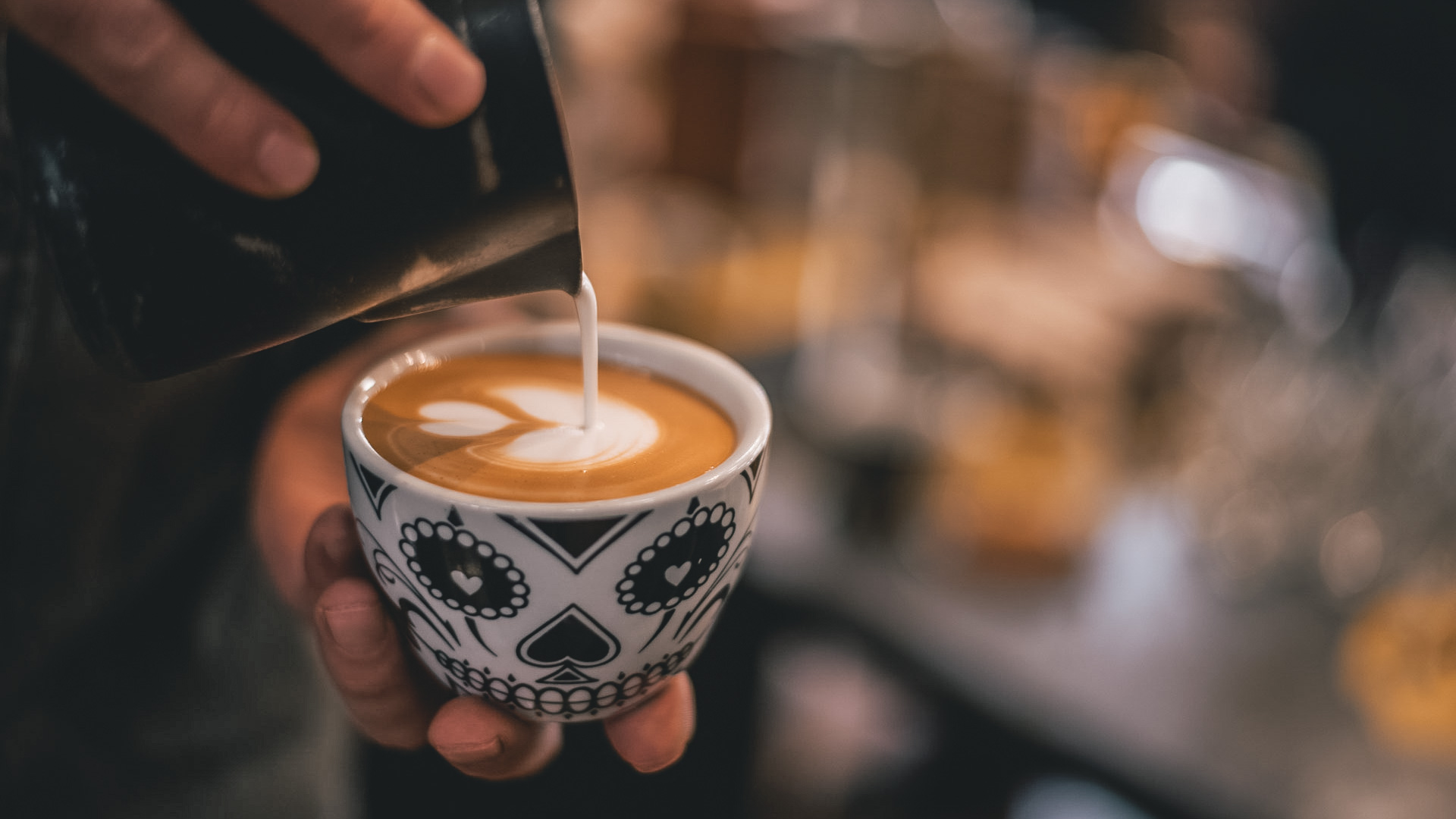 Cappuccino served with love, in the city centre of Athens 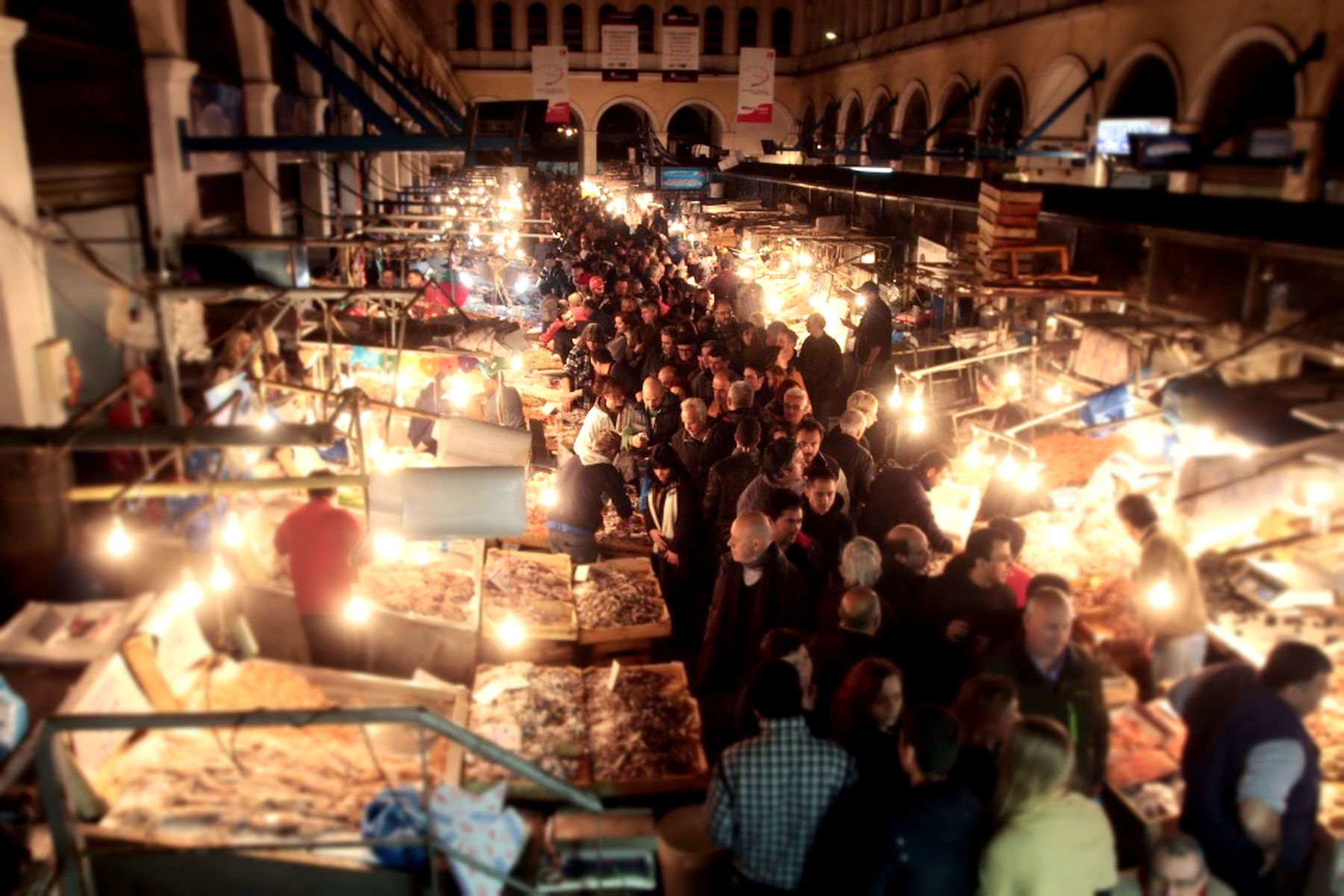 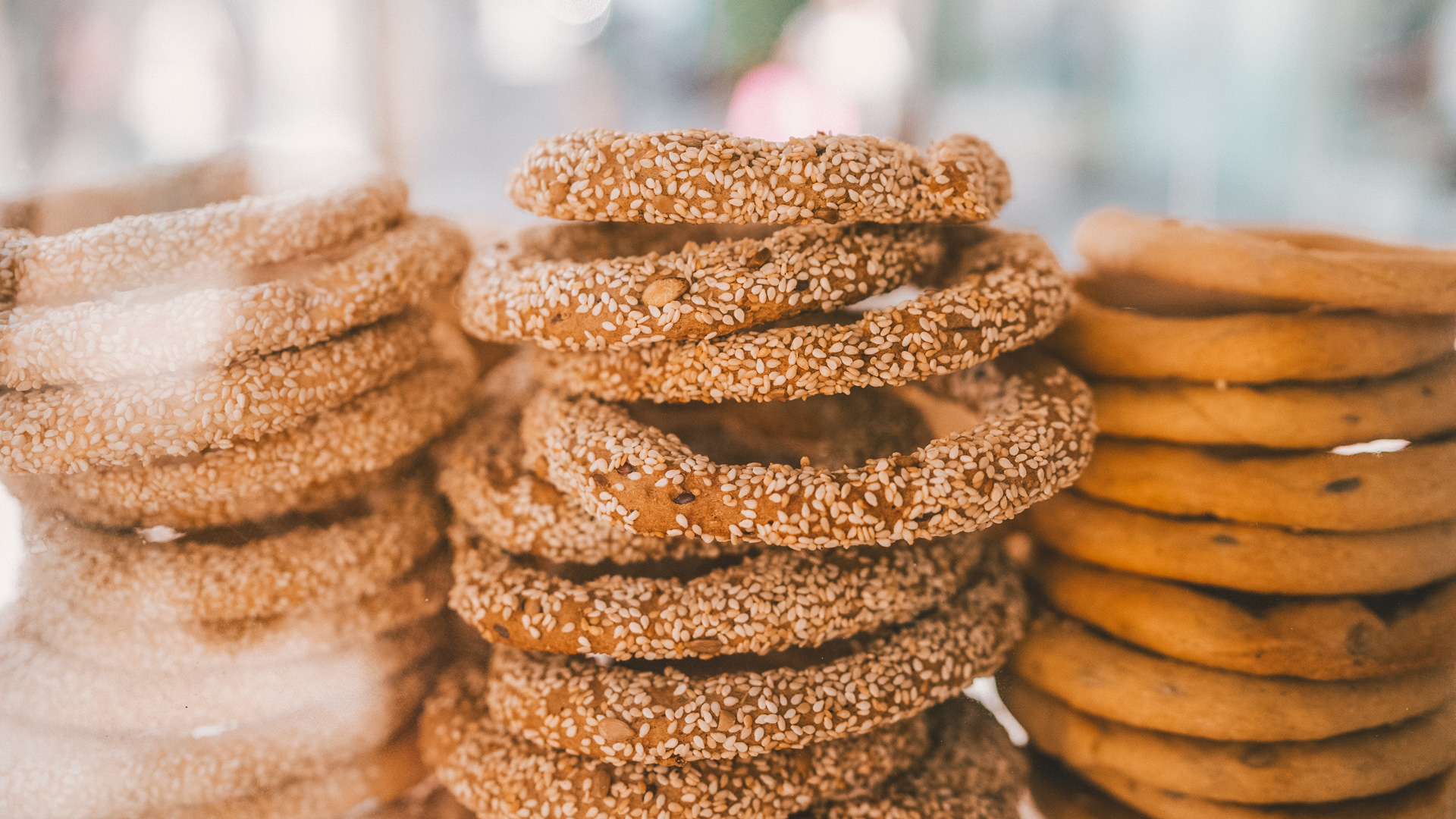 If you want a taste of something new (and a later start to the day), brunch has entered the Greek lexicon with a passion 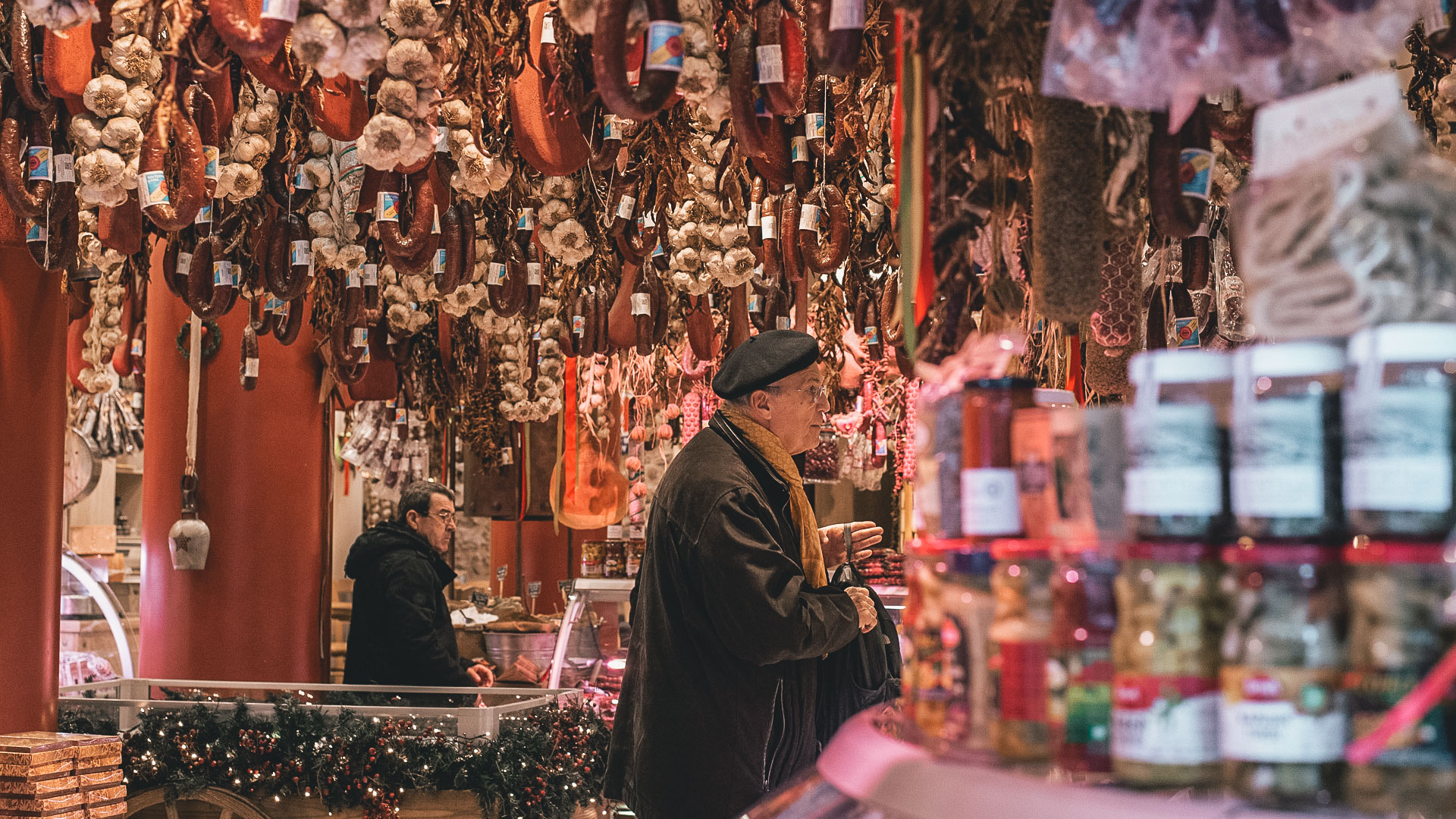 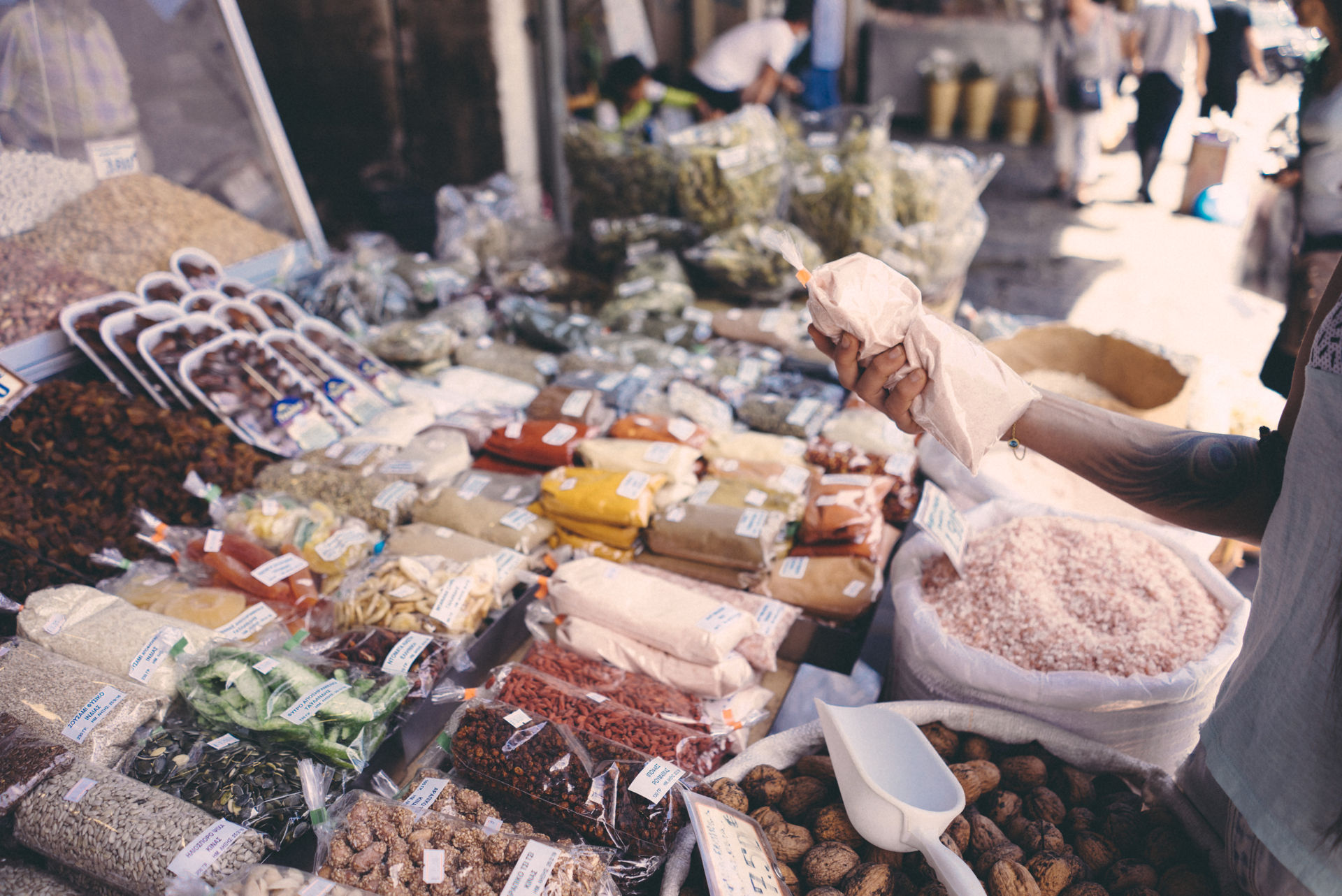 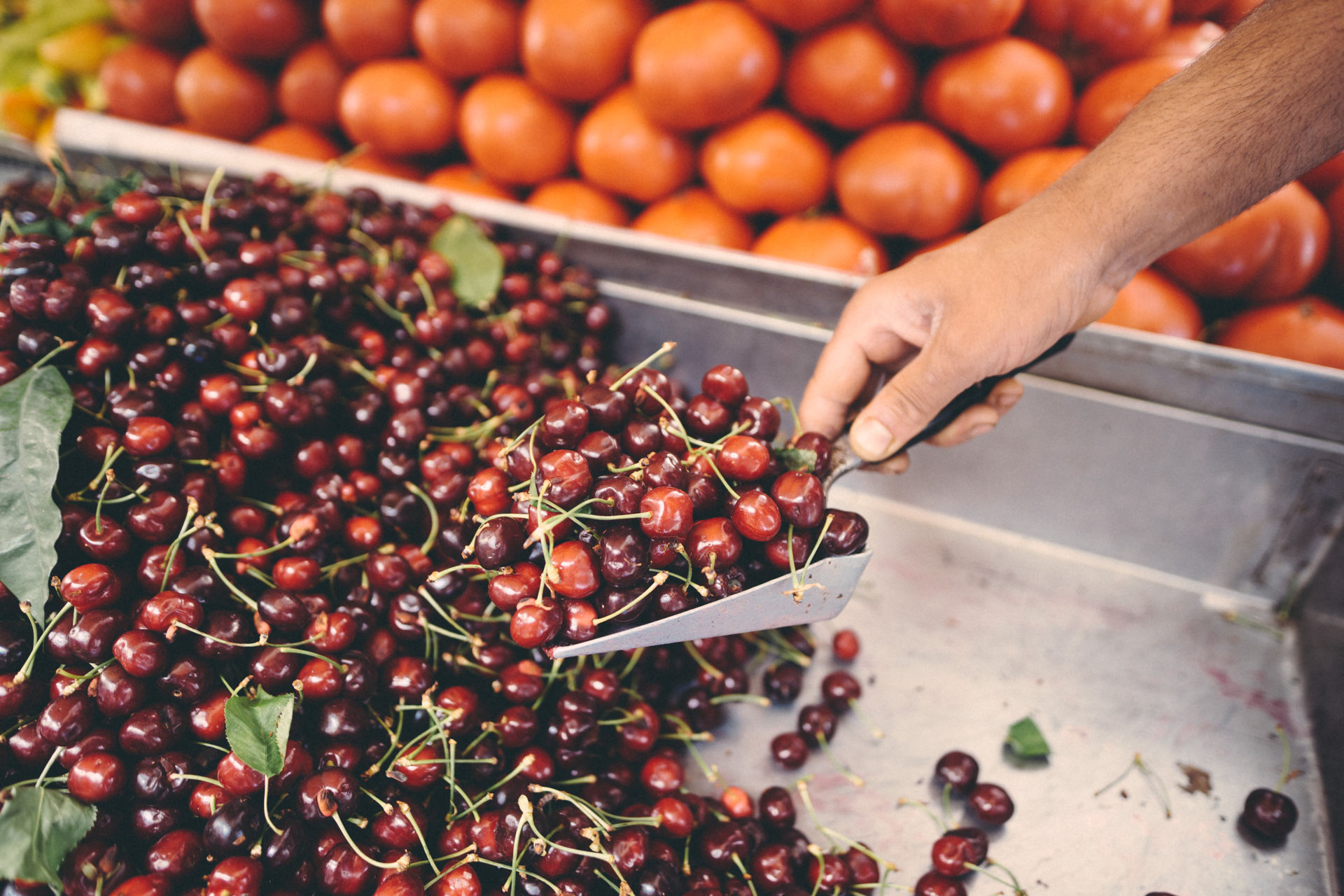 Street market selling cherries in the centre of Athens 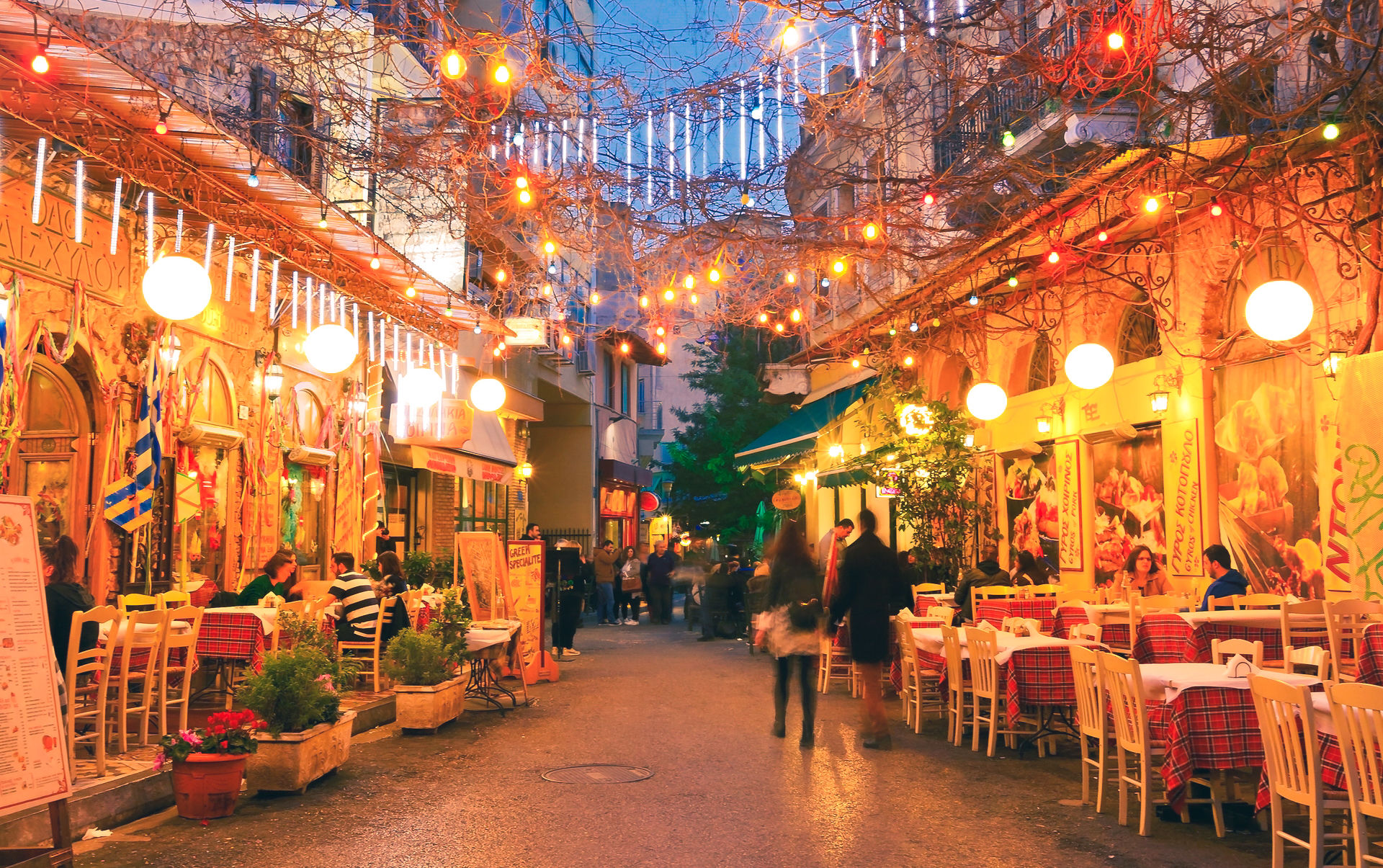 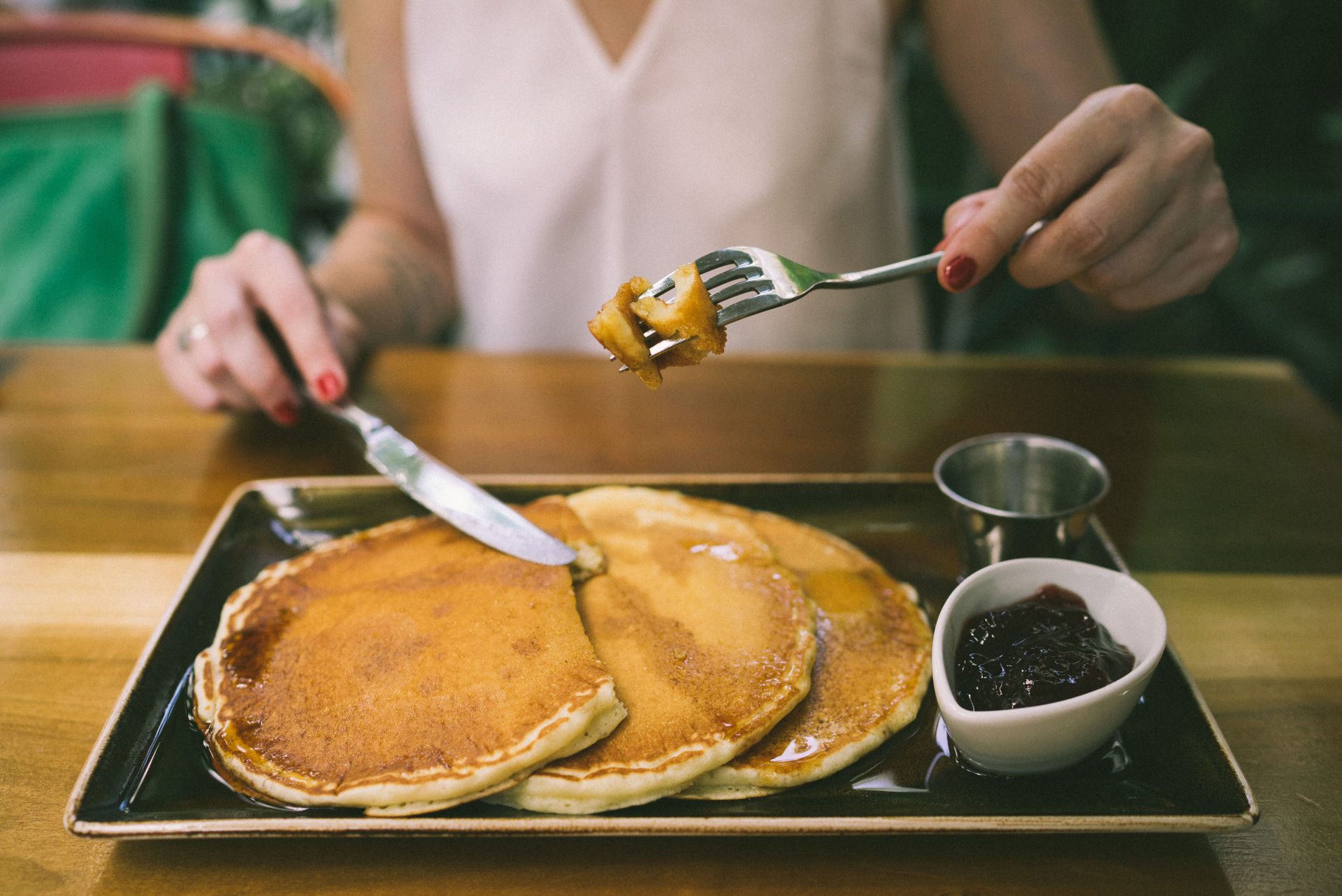 Sweet pancakes in the center of Athens 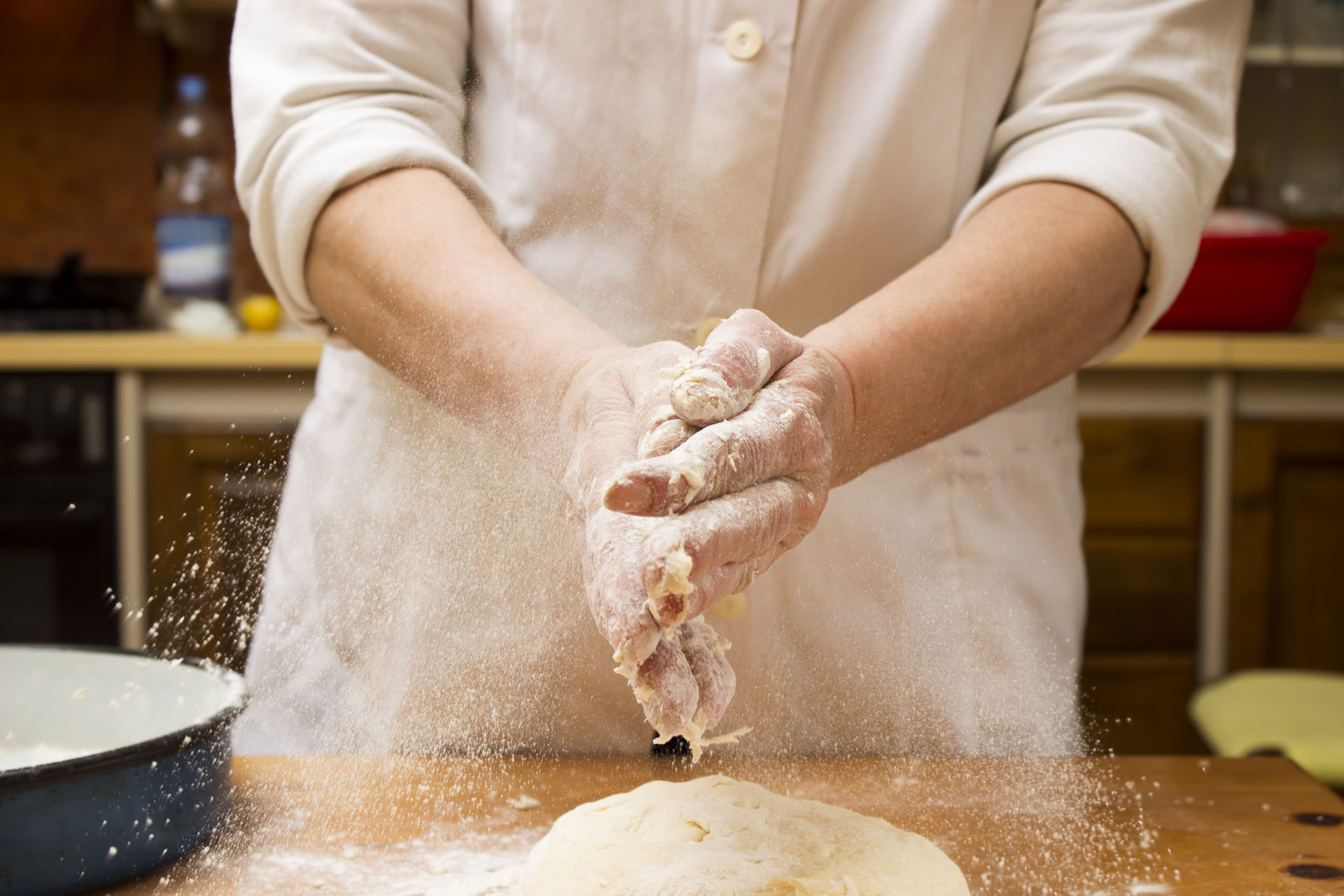 There are plenty of organised Athens food tours with expert foodie guides or you can explore by yourself. Either way, prepare to be seriously satisfied.

A Greek breakfast could be anything from a koulouri (a sesame seed-crusted bread ring) bought on-the-go from a street vendor to something more substantial, involving locally made yogurt, honey, preserves and ham and cheese. If you’re out and about, there are plenty of bakeries and coffee shops serving breads stuffed with all sorts of yummies and (of course) handmade pies. Or if you want to taste a new trend in Athens, brunch has entered the Greek lexicon with a passion. Pancakes and eggs benedict might not pass as traditional Greek food, but they’re enjoyed all the same.

Nothing will get you closer to the soul of Greek food than visiting the Athens markets. The Central Varvakios Fish & Meat Market and Fruit & Vegetable Market (both on Athinas Street) are full of life and colour. Following that, head up to the spice shops of Evripidou Street, where stores welcome you with aromas of thyme, sage and chamomile and other delights.

Dine-in delis have been part of the Athens food scene for decades, originally as convenience stores where you could buy in bulk (and have a snack and a chat with the patron while you waited). Today’s versions stock extra-virgin olive oil, wines, hams, cheeses and other delicacies handpicked by the owner, and sometimes have a small number of tables where you can eat a delicious cooked lunch or cold cuts. Head to the neighbourhood of Kolonaki and you’ll find out, or stroll down Mitropoleos or Sokratous streets. It’ll be one of the unexpected highlights of your Athens food tour.

A coffee and something sweet

No Athens food tour is complete without something sweet and there’s no shortage of choice, with pastry shops everywhere in Athens. You could choose a baklava (layers of filo pastry, nuts and syrup), a slice of galaktoboureko (filo pastry a custard filling, soaked in syrup) or loukoumades (freshly-cooked, small donuts drizzled with honey or chocolate). And to go with it, a coffee of course. Greek, freddo or frappe? Up to you.

The perfect end to the day (whether it’s part of an Athens food tour or not) is dinner under the lights of the Acropolis. There’s a whole selection to choose from, from the top floor of hotels to restaurants with converted rooftops. Definitely one of the best things to do in Athens.

Where should I start an Athens food tour?

Discover Greece tip: Athens city centre is small but you’ll be doing lots of walking, so wear a pair of comfortable shoes and season-appropriate clothes.

What is the best time to do an Athens food tour?

Discover Greece tip: It gets hot in the summer, which (apart from being uncomfortable) can affect your appetite, so if you can visit in the non-peak summer months you’ll enjoy Athens even more. 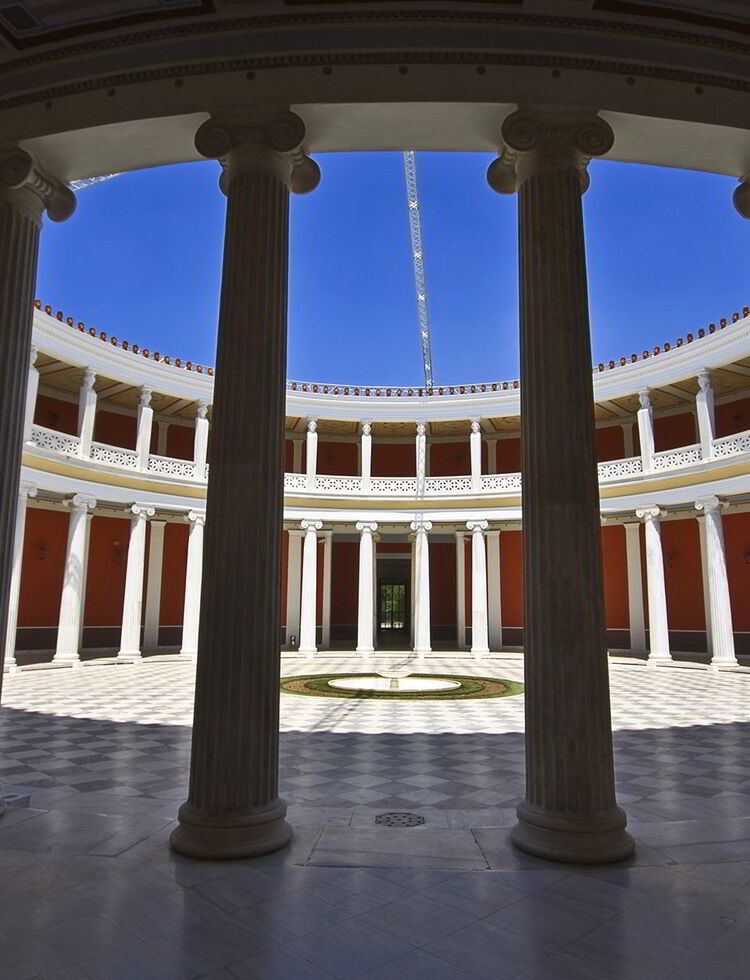