Taking a Saronic Gulf islands day trip from Athens lets you add a taste of island hopping to your visit to the Greek capital. So pack your sun cream and hat as you’re about to head to Aegina, Poros and Hydra and still be back in Athens in time for dinner 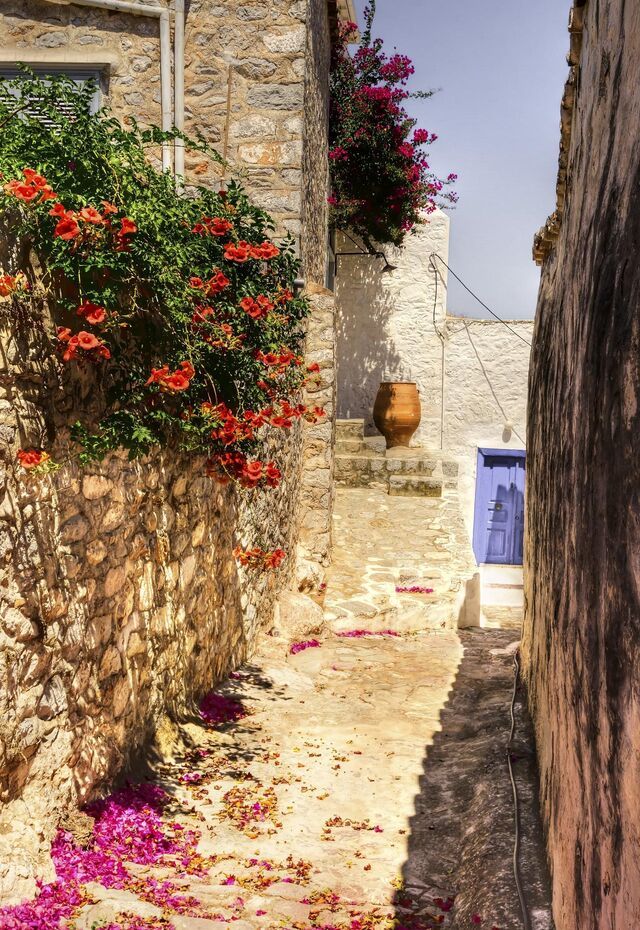 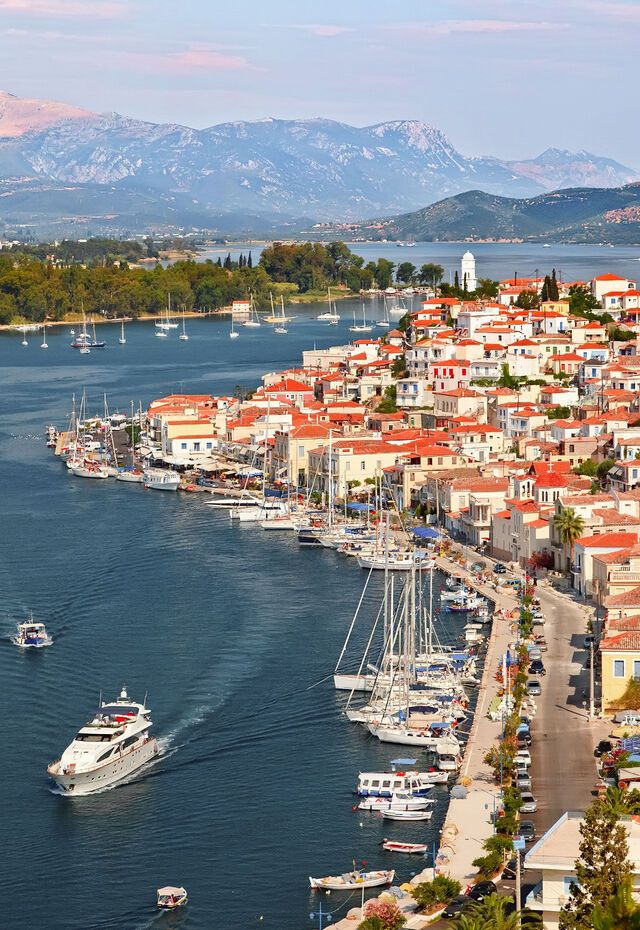 How about a city break with an island-hopping twist? Well, the islands close to Athens aren’t exactly secrets. The silhouette of Aegina tantalises you as you gaze into the Saronic Gulf right along the coast by the Greek capital. And beyond that are Hydra and then Poros, all perfect for visiting in a single day. And you could even throw in Spetses, just a little further into the Saronic Gulf.

There are other islands around two hours from Athens, such as Tzia (or Kea), Kythnos or Andros (part of the Cyclades but far closer to Athens than the more illustrious members of that island chain). All close enough to get to and back from Athens in a day.

But if it’s a taste of island hopping you’re after, let’s concentrate on Hydra, Poros and Aegina – visiting all three and still being back in Athens or Piraeus for dinner. So settle back and allow your the Saronic Gulf islands day trip to begin. 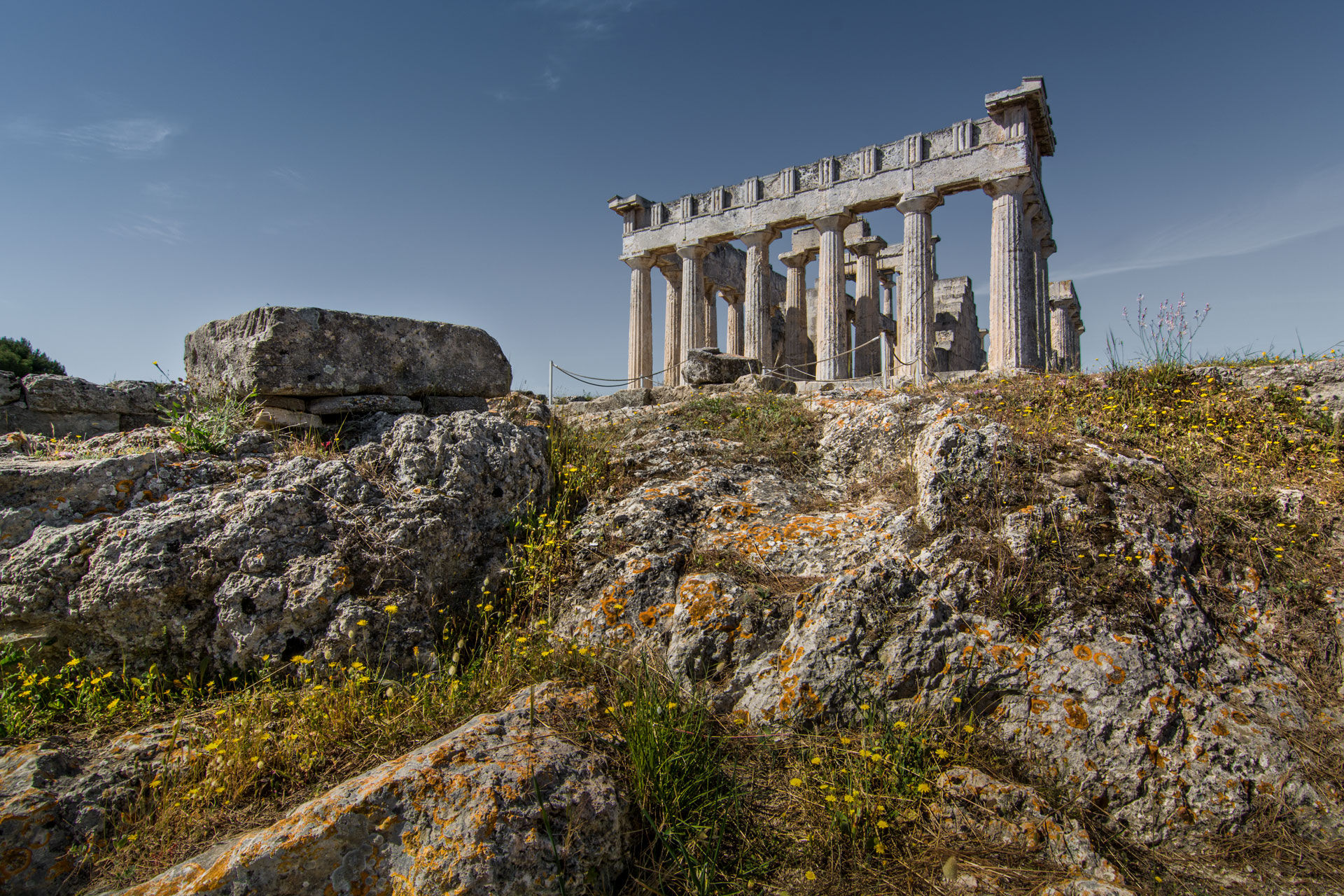 The Temple of Aphaia in Aegina 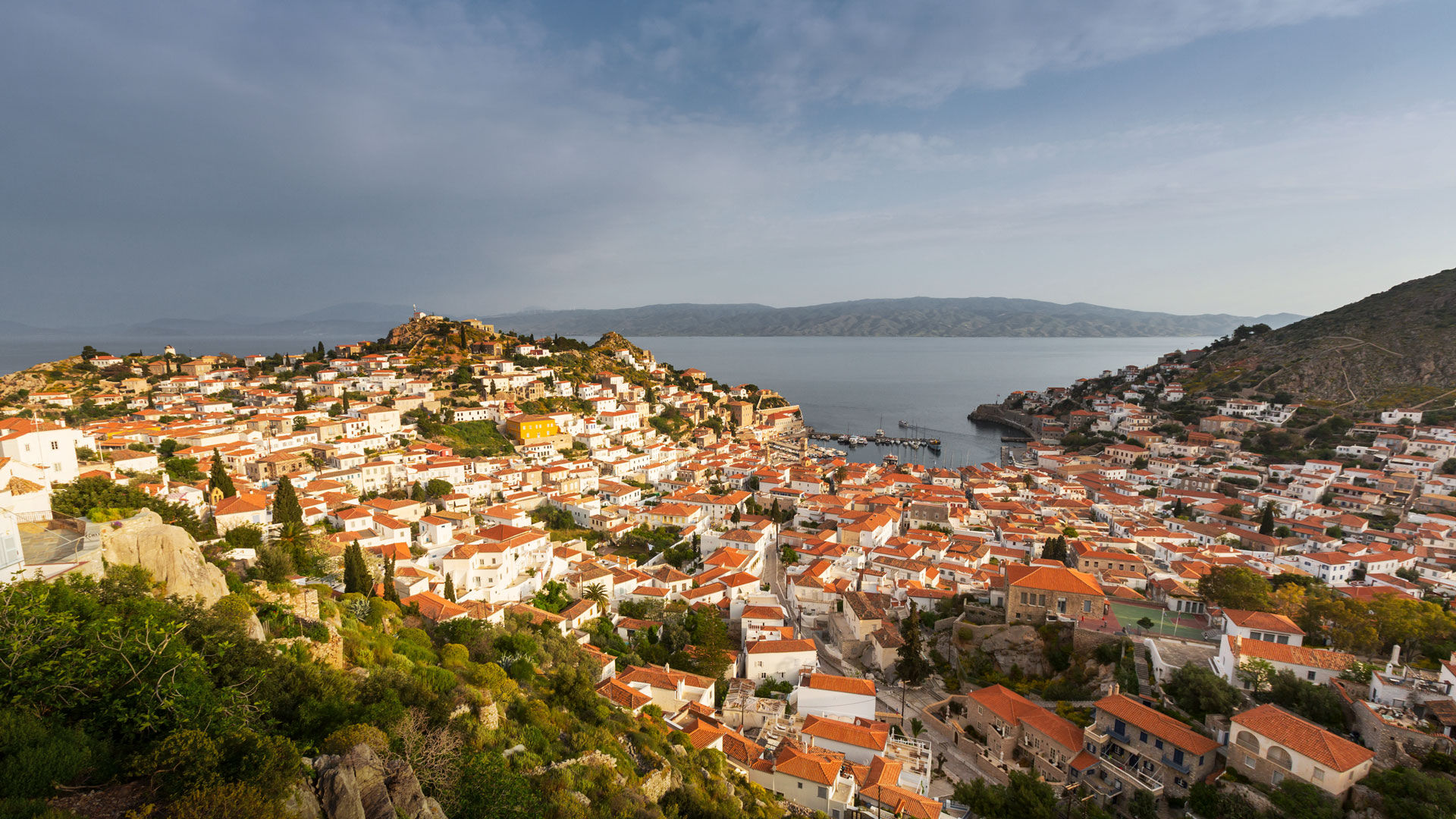 View of Hydra's Hora from above 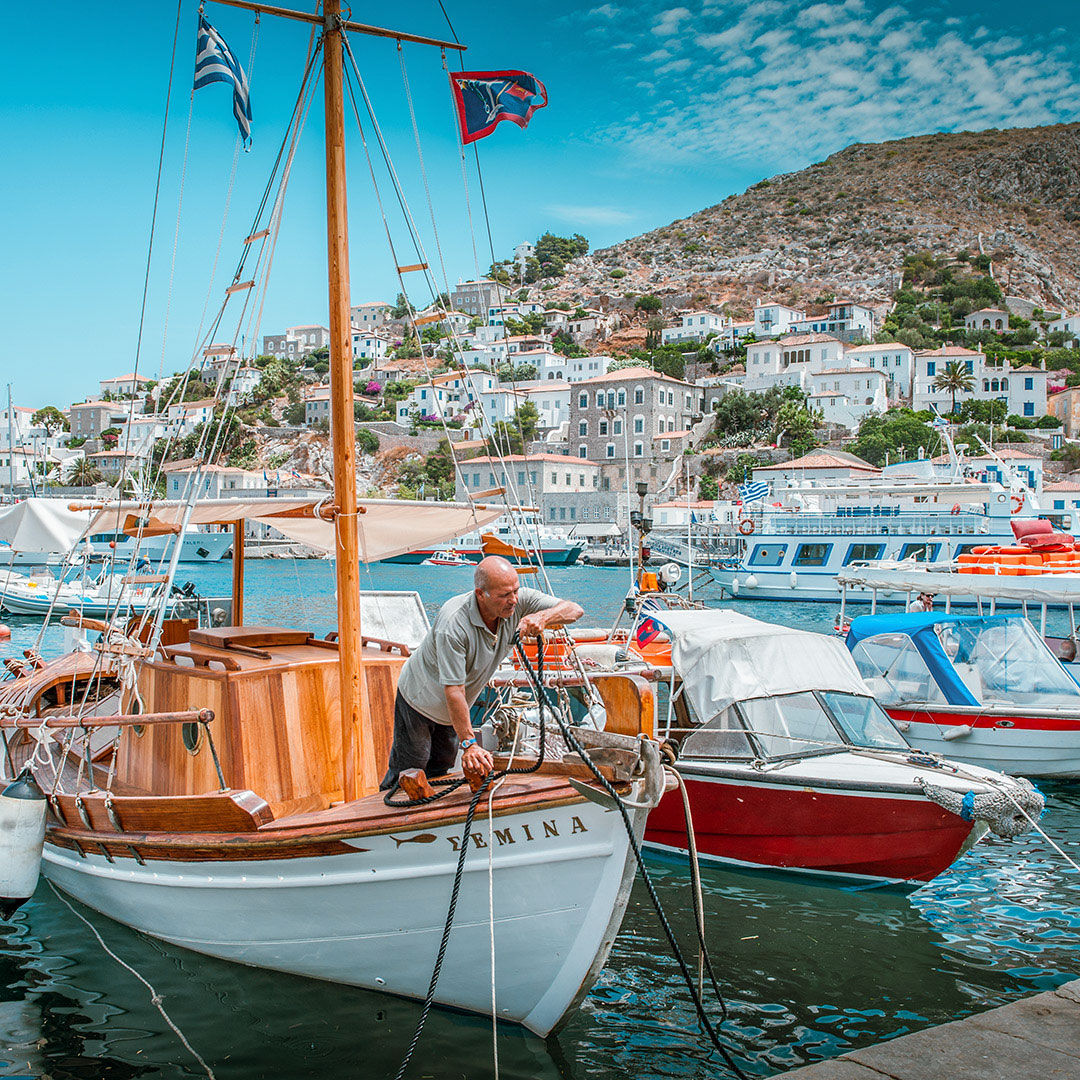 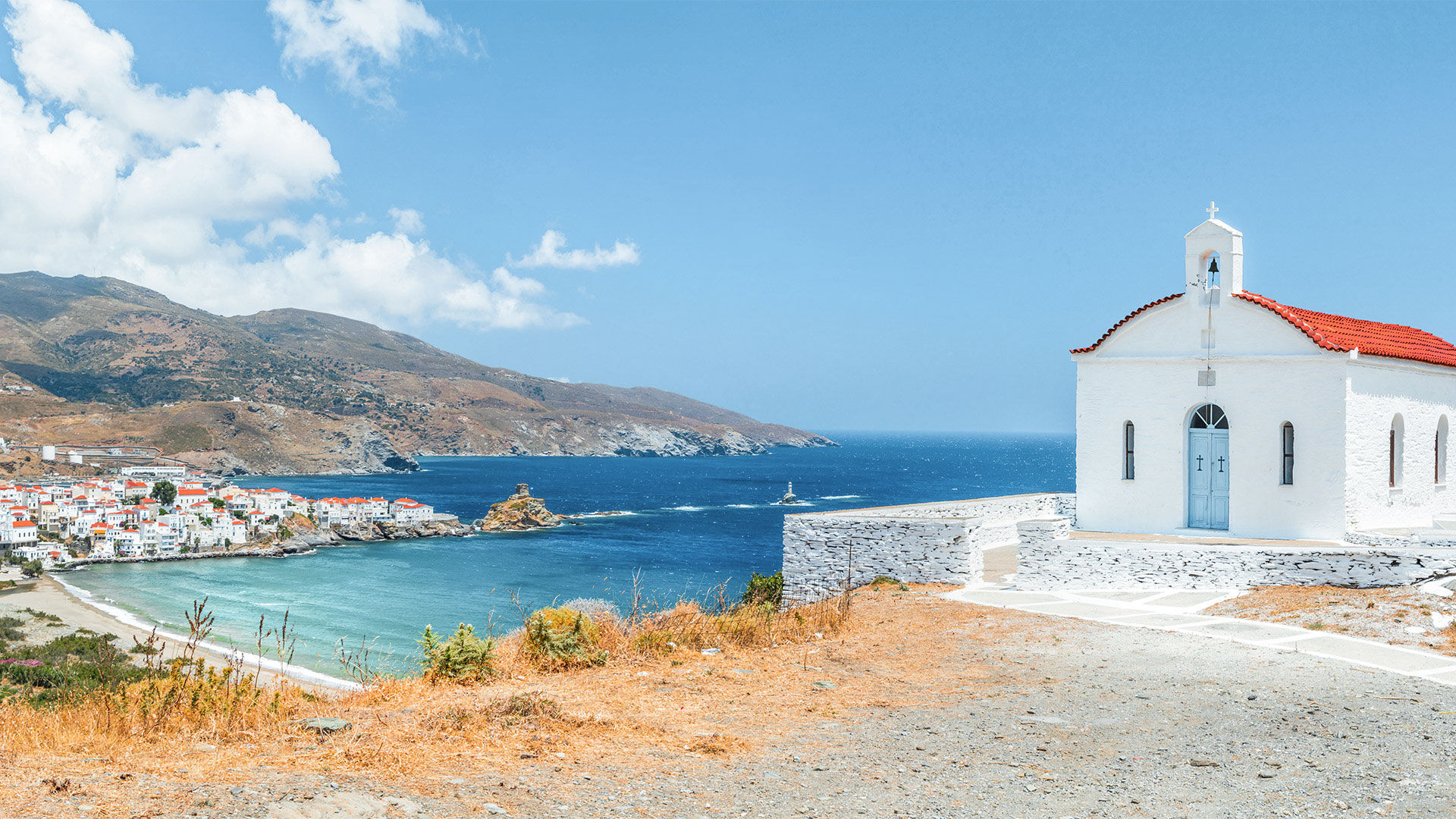 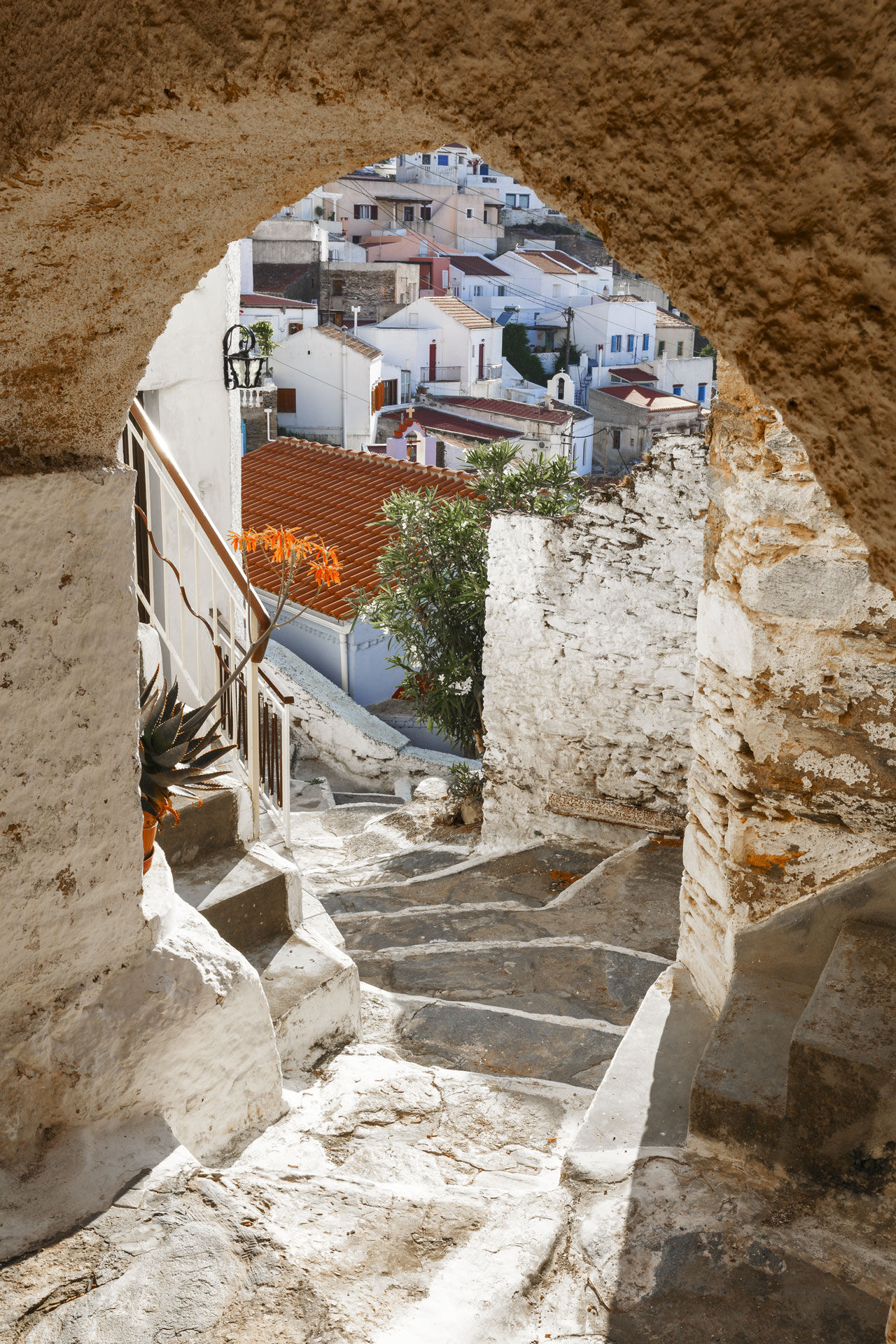 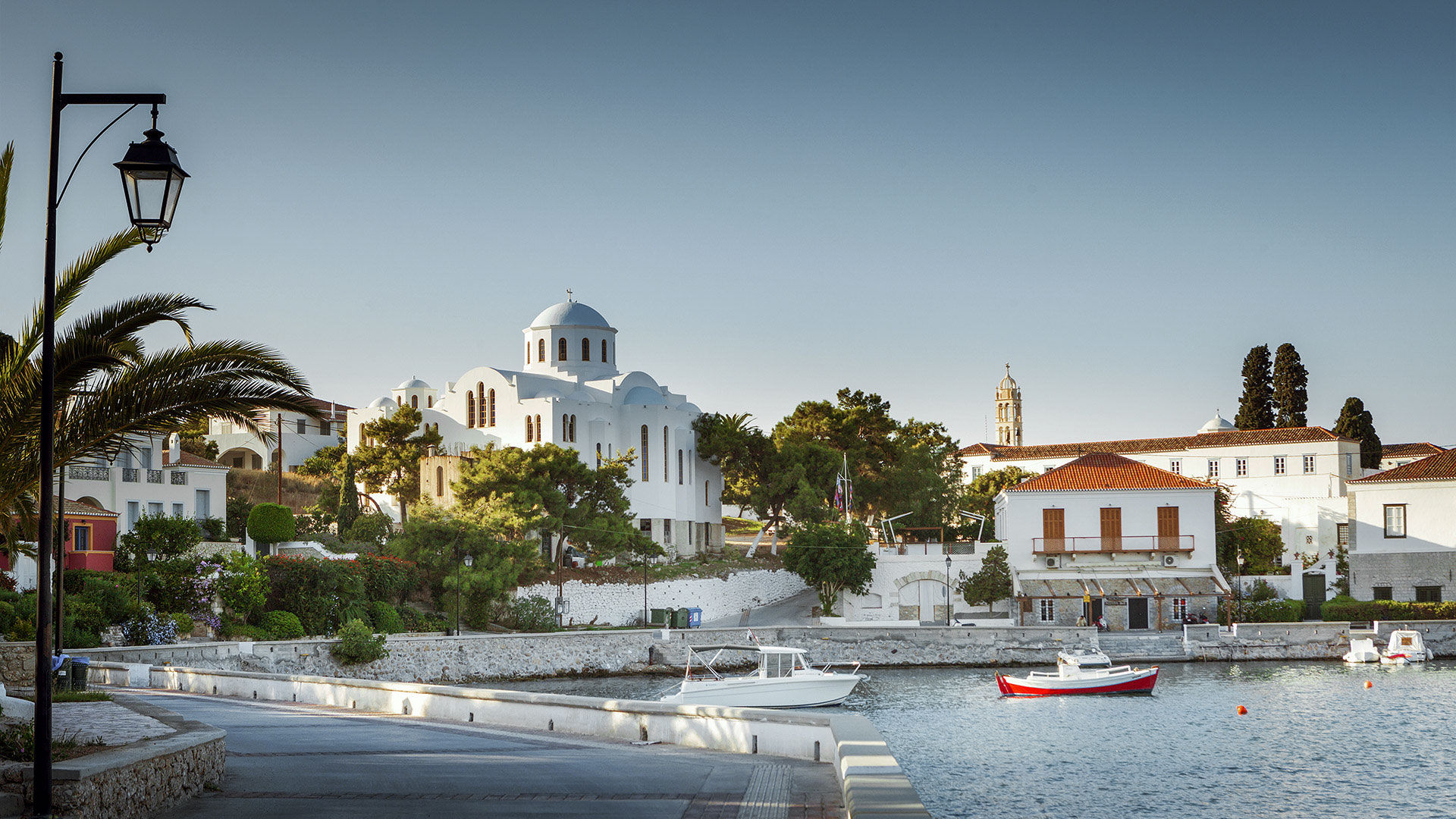 Church in the port of Spetses island 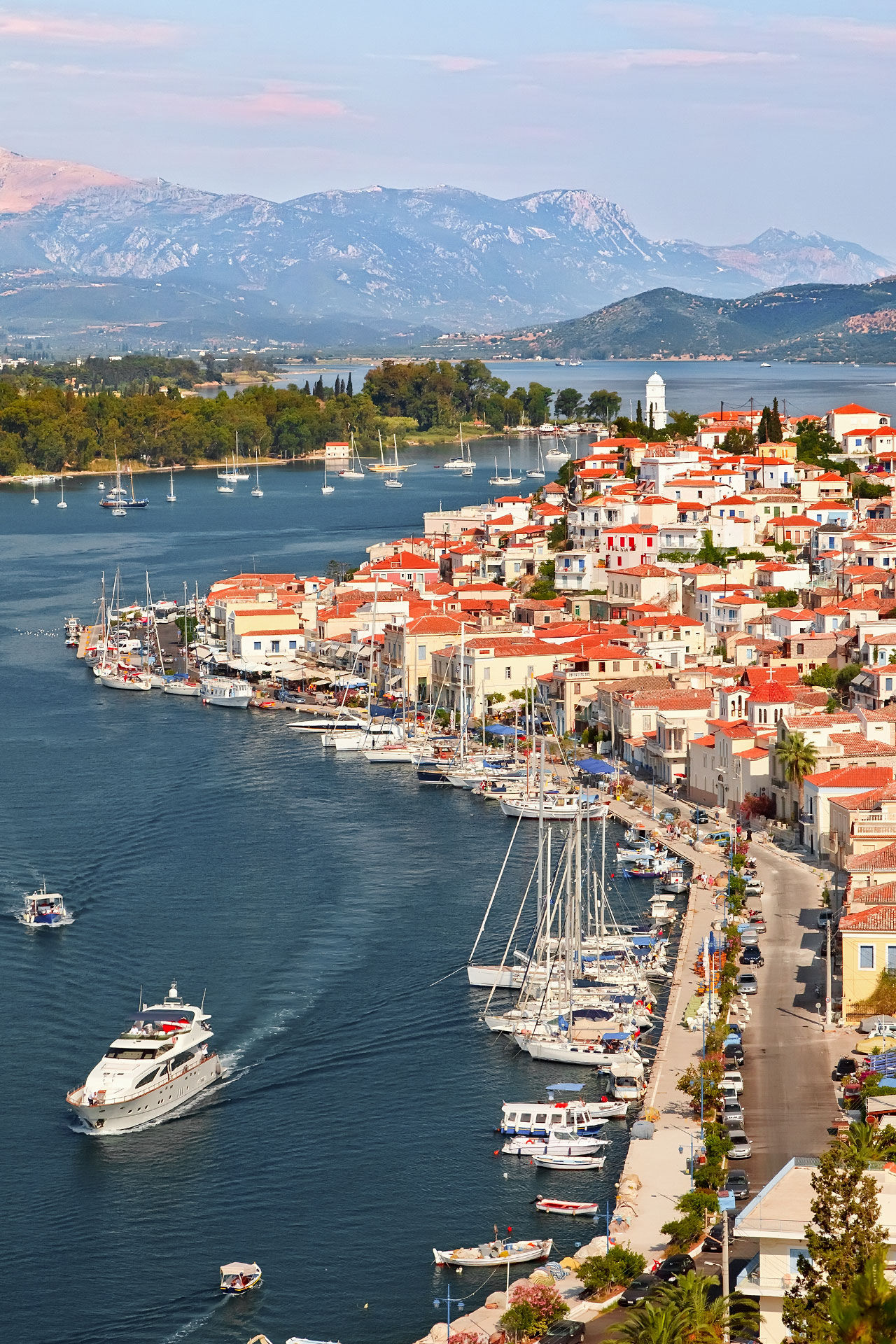 View of Poros from above 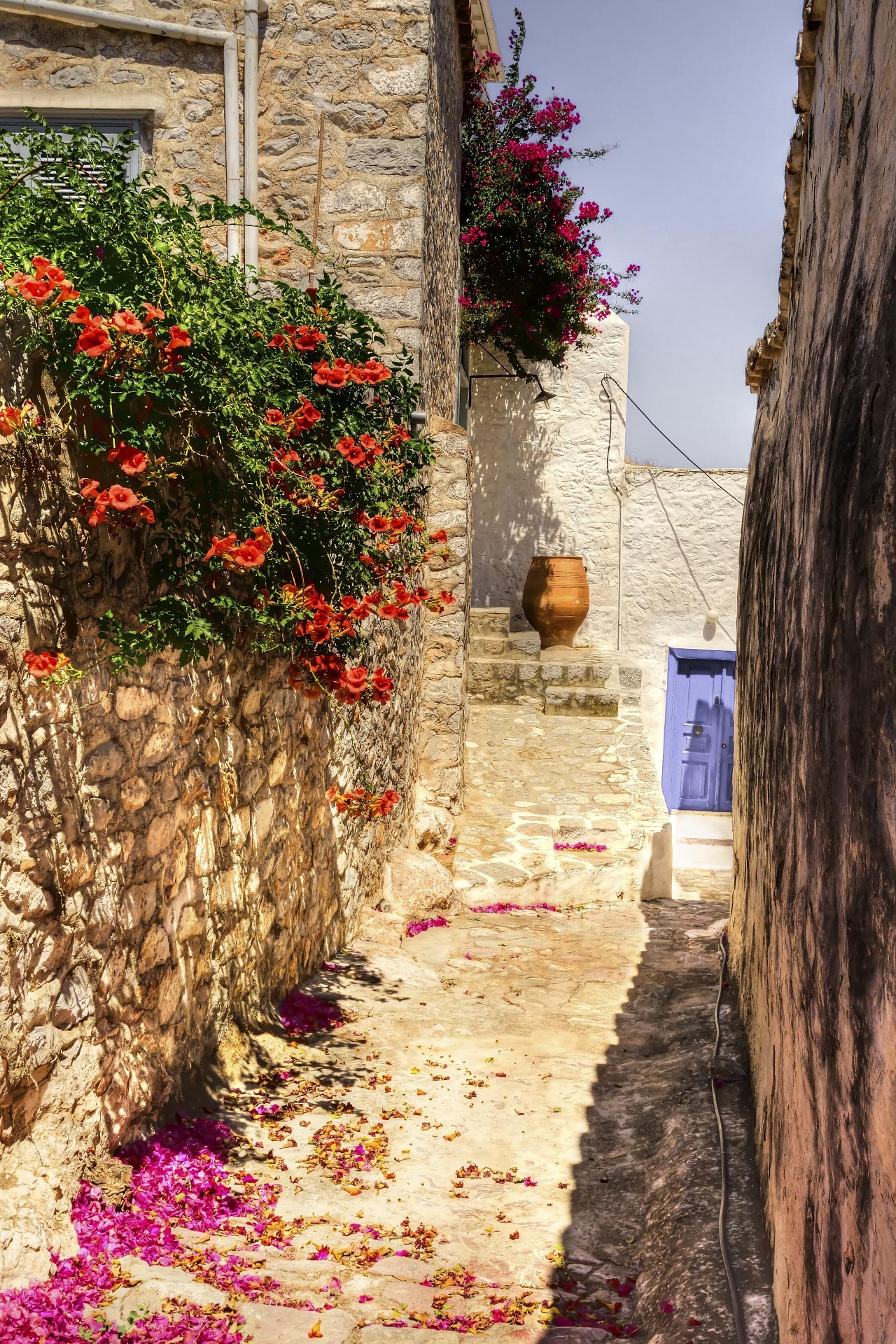 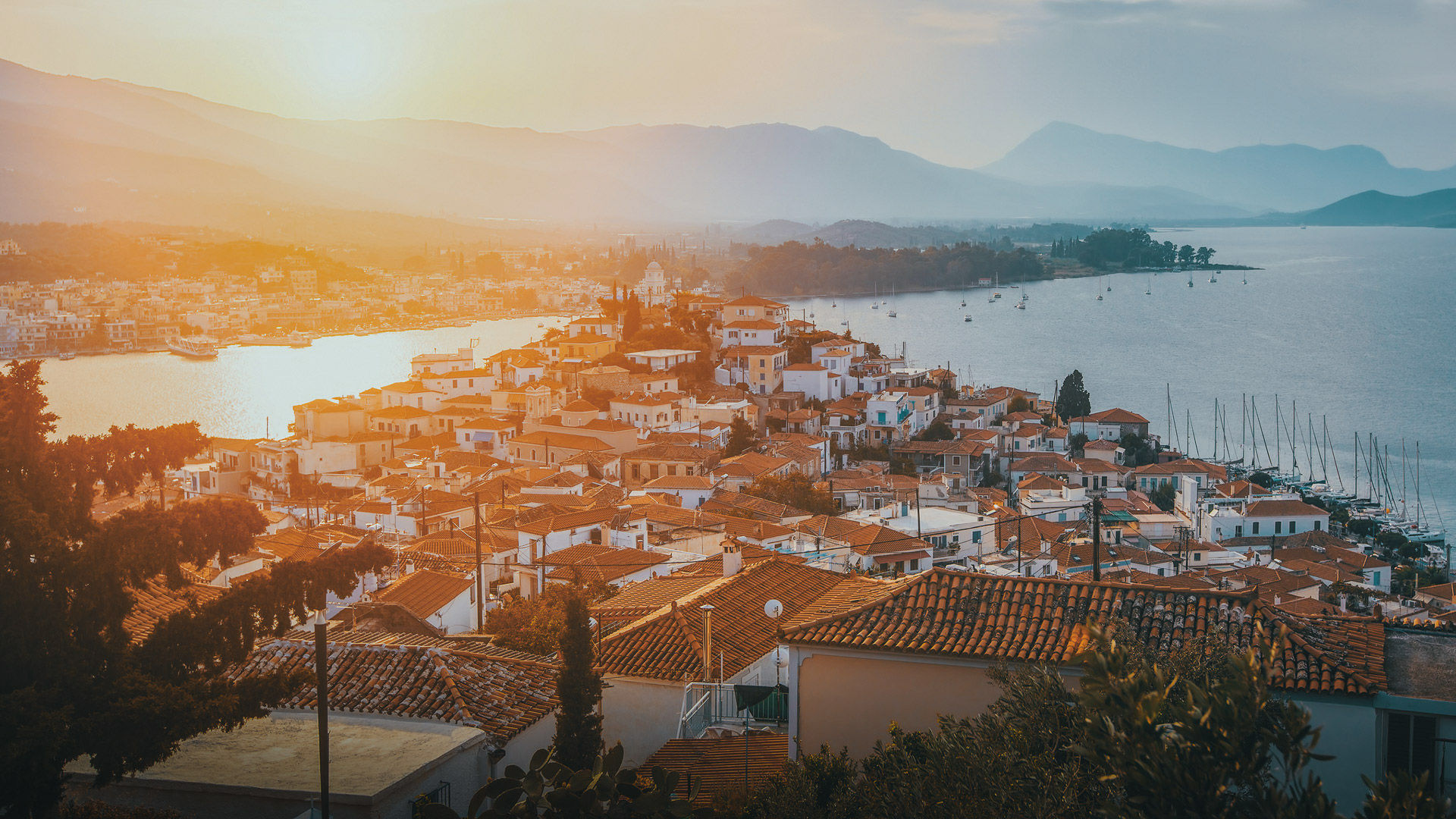 There are plenty of companies offering Saronic Gulf islands day trips from Athens or you could travel under your own steam. Either way, no mini-island hopping adventure in the Saronic Gulf would be complete without visiting these little gems:

Your day out in the Saronic Gulf begins in Hydra, the furthest away of our chosen islands. The buzz and energy of Athens are instantly replaced by the charm and charisma of Hydra as you are greeted by 18th-century captain’s houses and a waterfront of restaurants and cafes. In the labyrinth of alleyways in town, there are flower-filled courtyards and souvenir shops and, best of all, the island is car-free.

To head to the beach, you have to walk or take a sea taxi. But spend time just exploring. There’s the Miaoulis Monument (honouring the revolutionary naval hero) and you can visit Hydra’s Museum of Historical Archives and the Kimisis tis Theotokou Cathedral, in a 17th-century monastery complex that includes an Ecclesiastical Museum, right next to the harbour. Look out for the Lazaros and Pavlos Koundouriotis mansions, with a collection of folk exhibits.

A tip is to climb the Profitis Ilias Hill, where there’s a fantastic view of the red-tiled roofs around the harbour. And for a swim, there’s the beach and little harbour of Kamini (15mins walk away) and beyond that Vlychos and Mandraki. Not a bad way to start your day out in the Saronic Gulf.

You are immediately seduced by the serenity of Poros as you arrive on the greenest of the Saronic Gulf islands. Poros is in fact two islands separated by a natural canal, with the neoclassical buildings rising amphitheatrically above the port on Sferia and Kalavria characterised by pine trees reaching the sea.

The flower-filled courtyards, fish tavernas and souvenir shops of town satisfy every craving for island life and there is history to dip into here as well, with an Archaeological Museum and the church of Agios Georgios and Folklore Museum. Climbing to the 1920s clock tower (Roloi), you are treated to a wonderful view.

Walking-distance beaches include Kanali (20 minutes) and, a little further away, Askeli and Mikro Neorio (30 minutes). And if you have transport, head to the ruins of the 6th-century Temple of Poseidon or Monastiri Beach and the Limanaki tis Agapis (Little Port of Love).

Returning towards Piraeus, you reach Aegina, famous for its antiquities and pistachios. The neoclassical houses paint a picture of the island’s 19th-century glamour days, but there is still a traditional feel to the town with coffee houses and tavernas for a late-afternoon ouzo and seafood meze.

The alleyways of Aegina town are full of houses and shops (be sure to take home a bag of pistachio nuts or liqueur) and look for the Markellos Tower (the pink watchtower housing Greece’s first government after independence from the Turks), Archaeological Museum and Historic and Folk Museum.

Just 10mins away by foot is the archaeologic site of Kolonas but more impressive (reached by bus or car) is the 5th-century BC Temple of Aphaias, built on a pine tree-filled hill and one third of the ancient Sacred Triangle of temples including the Parthenon and Temple of Apollo at Delphi.

A final treat is to nip over from Aegina to the tiny island of Moni, with its unbelievably clear water, wild goats and peacocks. It’s included in some day trips, or you can reach it by boat from the fishing village of Perdika on Aegina. Or there’s Angistri, another magical little isle next door to Aegina. There are ferries that head there from Aegina port or directly from Piraeus… in which case a tip is to take a bike and find your own special cove or beach to swim in.

Group
Discover the Saronic islands of Hydra, Poros and Aegina on a scenic full-day trip from Athens. Enjoy stunning views of the Greek coast and the...
EXPLORE ALL

Where do Saronic Gulf islands day trips leave from?

How do you get from Athens to Piraeus port?

How do you get from Athens to Flisvos Marina

When is the best time of year for a Saronic Gulf islands day trip?

Is one day long enough to visit the Saronic Gulf islands near Athens?

What other Saronic Gulf islands are worth visiting? 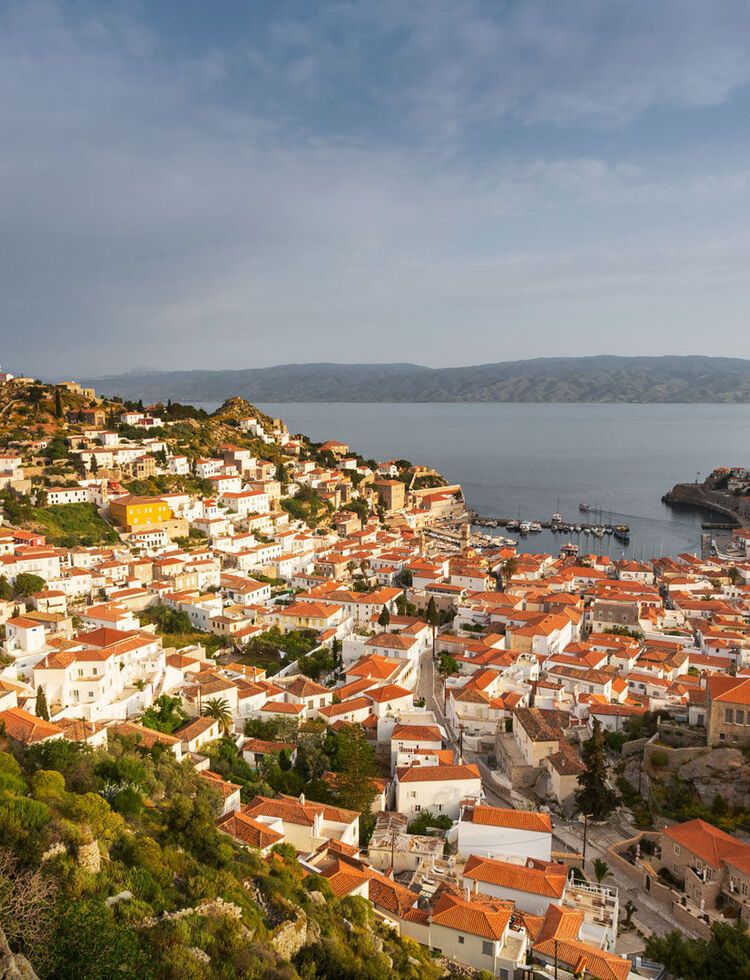 Leave only your footprints on the beach and don’t remove any shells, rocks, fossils or sand.
Use the bins provided or, if need be, take your rubbish with you.
Respect the marine life and the plants and animals on shore.
Respect any cultural sites or monuments you encounter on the way.
Use a refillable water bottle to try to minimise your use of plastic.
Explore your surroundings but please keep to designated paths for your own safety and to avoid disrupting the flora and fauna.
Making fires on beaches is strictly forbidden.
Do your best to support small, independent family-owned stores and local producers, taking home something handmade and local.
Read More Read Less
DESTINATION