A streak of silver in the Aegean 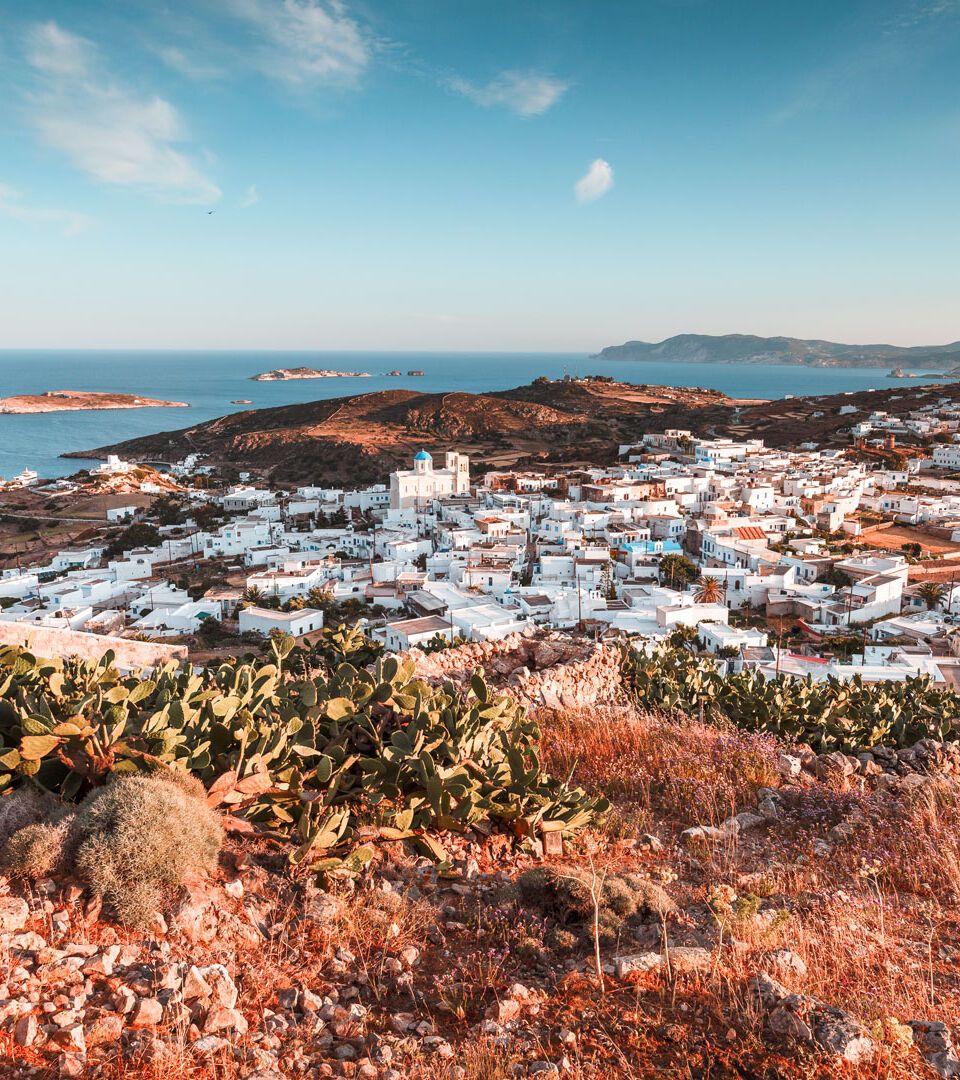 Today
23°
MON
23°
TUE
23°
WED
24°
THU
25°
A tiny jewel sparkling in the Aegean sun, Kimolos extends the warmest of welcomes, with all its authenticity and considerable charm

Nature gave birth to this island in a fit of rage and compensated by endowing it with rich gifts. The volcanic island of Kimolos – Arzantiera, meaning silver, to the Venetians – welcomes you in its own serene way. Colourful, shiny pebbles; limpid waters; grey-white rocks whose shapes tease the imagination; thermal springs streaming onto sandy beaches … everything comes together as one single painting of unique beauty.

Things to do in Kimolos

Horio and the castle

Horio, the main settlement at the foot of Mt Ksaplovouni, will enthral you with its picturesque simplicity. Walk under archways amongst white houses with gardens in full bloom, and rest in a traditional cafe whilst talking with the open-hearted locals. From Platia tou Sholiou, the square of the school, you can admire the moon by night and, from the Chapel of Pantokratoras, take in a view of the nearby islands at any hour. In the evening, enjoy a drink in one of the bars in Agora, the central thoroughfare.

The centrepiece of Horio is the medieval castle. From the 14th-15th century, it consists of two clusters of houses, now derelict Mesa Kastro and Exo Kastro, whose houses once formed a stronghold against pirate raids. From the moment you enter the two gates of Exo Kastro and Kato and Pano (Lower and Upper) Porta, you’ll be whisked back in time.

In the Archaeological Museum, you will see exhibits that guide you through thousands of years of the island’s history. There’s a depiction of an ancient burial, uncovered during excavation work, under a transport floor. And In the Folklore Museum, you will admire the efforts to keep the traditions of the island alive, lovingly handed down to future generations.

On the Sklavi elevation, in the middle of a bare plateau is a rare and striking geological formation. Registered in the Aegean Geological Monument Atlas, ‘the stone mushroom’ has acquired its unique shape due to the variety of rock types of which it is composed, all with different levels of resistance to the prevailing winds.

The beaches of Kimolos

Don’t forget your goggles when you come to this beach. Lying just below the surface of its shallow waters is the ancient city of the island. In Mavrospilia, you will enjoy a dreamy sunset. And don’t forget your camera because nearby Apagremna will also enchant you.

One of the most impressive beaches of Kimolos, with turquoise waters and loose-grained sands. At the entrance to the hamlet, there are thermal springs. And under the chapel of Agios Georgios, the rare and endangered Mediterranean monk seal is said to find refuge in the sea caves.

Gioupa is a picturesque fishing village with a few houses and a small harbour. At the end of the headland, you will see the “elephant”, a figure sculpted by the sea and the wind with the passing of time. At some other point, your attention will be drawn by Sirmata, the caves carved out of the rocks by the fishermen to haul their boats into for shelter during the winter months. Next to Sirmata, you’ll find a pebbly beach, Rema, and a natural pool with azure waters, inviting you in for a quick dip.

Find yourself some shade under the tamarisks of Aliki beach and enjoy a swim in sparkling waters. Bliss!

Boats of all descriptions are ready to carry you to gorgeous beaches and wild, untamed landscapes of Kimolos. The sea cave of Gerakia is unforgettable, especially wading through its clear, shallow waters. In Agioklima, you will be rejuvenated in the therapeutic warm waters. And in Geronikola t’ Apsila, you will admire the grey-white volcanic rock.

Just a nautical mile away, between Kimolos and Milos, is Polyaigos, the biggest uninhabited isle in the Mediterranean and a veritable ecological haven. It provides shelter to rare species of flora and fauna and its gorgeous beaches, such as Mersini and Galazia Nera, and exotic bays attract yacht owners and boat trips.

If you love a good hike, equip yourselves accordingly. The hiking routes of Kimolos are fantastic.

Experience the best of Kimolos 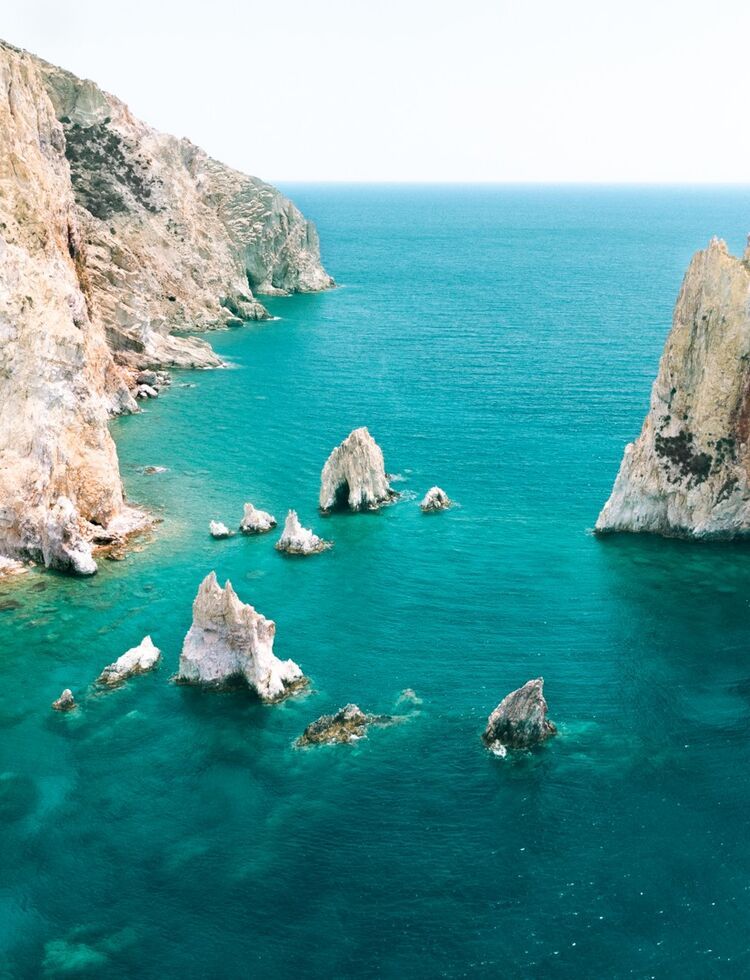 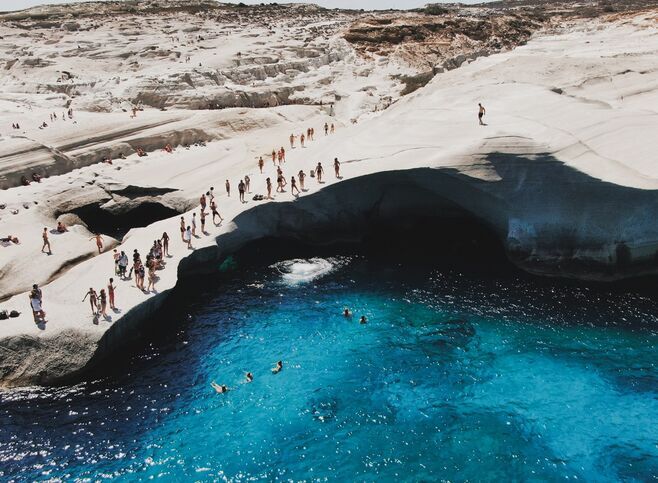 Island-hopping from Milos in the Cyclades

From technicoloured Milos, prepare to discover the wonders of Kimolos, Sifnos and Serifos 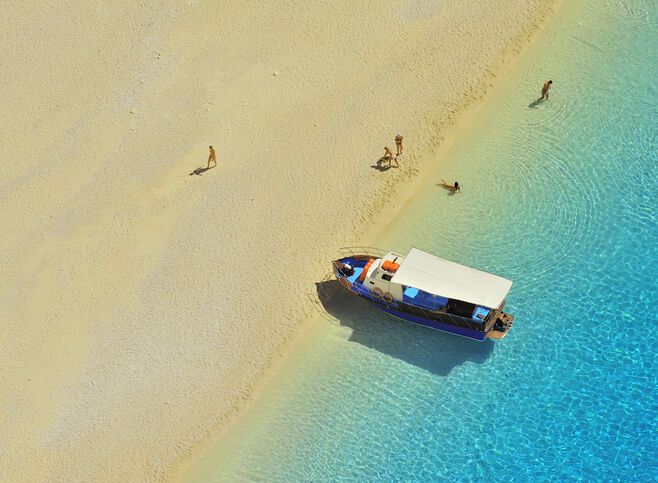