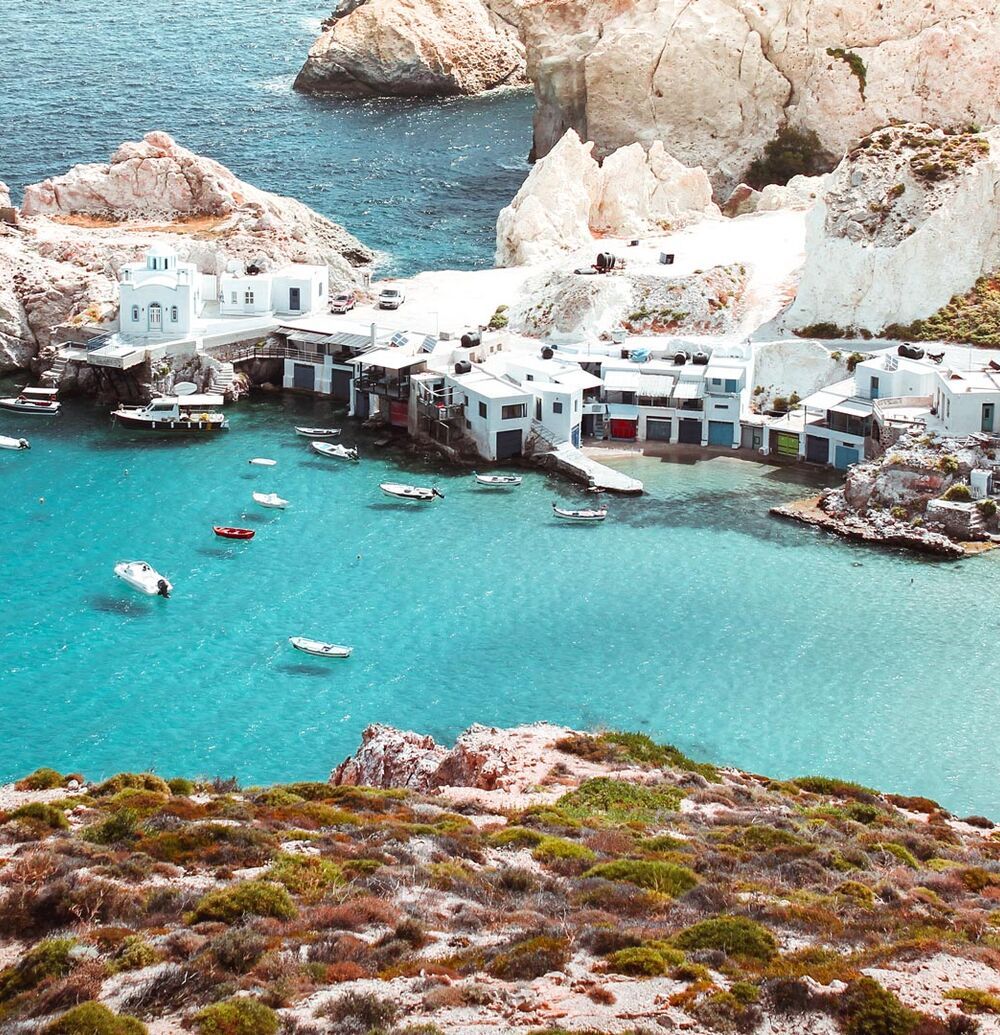 8 TOP THINGS TO DO IN MILOS

Milos is one of Greece’s rising stars, with an extraordinary array of beaches (more than 70), volcanic scenery, cute little boathouses and fantastic food. Whether you explore by car, foot, boat or even kayak, your holidays in Milos will be full of colour and Instagrammable memories. So to help you make the most of it, here’s a list of unforgettable things to do in Milos.

Explore the lunar landscape of Sarakiniko

A sight that says you could only be in Milos. The lunar landscape of Sarakiniko has been captured in so many photos but nothing prepares you for the real thing. The limestone-white rock, shaped and smoothed to resemble the surface of the moon, is dramatic enough. But then comes the contrast with the deep blue sea and the little sandy beach below and that’s it … your heart’s well and truly captured. And if you want to make the experience truly epic, try cliff jumping into the azure-blue sea. A day at Sarakiniko is full value as No.1 in your list of things to do in Milos.

Fly to the moon at Sarakiniko

Take a boat trip around the island

The only way to fully appreciate the wild beauty and colours of Milos. Your entire boat trip around Milos will be special, but there are some standouts: Kleftiko is a one-time pirate hangout, dominated by steep cliffs and with turquoise water made for snorkelling, and Gerakas has sand dunes appearing to flow into the clear blue sea.

Discover the beaches & bays of Milos

Traces of their existence can be found in Kleftiko, where the pirates’ bollards for their ships can be found sculpted on the spectacul
Nestled beneath vertical cliffs, Tsigrado offers wonderful isolation and beautiful swimming
An absolute must-see, Kleftiko was once a pirate hideout on the southwestern tip of the island
Tsigrado beach, Milos
Gerontas, with white cliffs, dark sand and a distinctive archway you can swim through
Kleftiko, a complex of volcanic rocks, one of the most recognizable landscapes of Milos
Jerome Prax
-Sykia Cave in Milos was a sea cave the roof of which collapsed, creating a sink hole
Michael Paschos
Gerakas, you’ll find white sand, clear blue water and the distinctive backdrop of a rockface sloping upwards from the beach
Plathiena beach, Milos

Discover the natural pool of the Papafragas Caves

Another one-time cave whose roof collapsed long ago, Papafragas Cave is more intimate than Sykias. With a little sandy beach at one end, it feels like a natural swimming pool shimmering under the sun. Exploring the area, you’ll find some sea caves nearby. No wonder pirates once loved the place.

Just a breath away, the village of Pollonia is foodie heaven – not only because of the fish tavernas and little fishing boats testifying to the freshness of the produce, but because there is (yet another) great sandy beach to enjoy. Succulent seabass, fried squid, grilled sardines and smoked eel await … accompanied by vibrant salads and local dishes. Try the karpouzopita (watermelon, honey, cinnamon and sesame seed pie). It’s a local delicacy, worth its place alone in any list of things to do in Milos.

Take a stroll around historic Plaka and Tripiti

While the port of Adamas (or Adamantas) is the biggest settlement on Milos, little Plaka (a few kilometres to the north) is the island’s capital. Inhabited since the early 19th century, this is where Milos reveals its Cycladic character, with little whitewashed houses and cobblestone alleyways. Above Plaka, you’ll find the Kastro district, so-called because of its Venetian walls. And just a short walk away is the village of Tripiti, famous for its catacombs (an amazing network of tombs built by early Christians fleeing Roman persecution) and an ancient amphitheatre.

Enjoy local dishes in a traditional taverna in Plaka
Plaka and the Castle
You will find plenty cafes, tavernas and gift shops in Plaka, the capital of Milos
Strolling around Plaka in Milos
Plaka is where Milos reveals its Cycladic character
Plaka village on Milos island
Plakas' picturesque alleyways
Tavernas serving local dishes and ouzo in Milos
The ancient amphitheatre near Tripiti village in Milos
Exlore Plaka, Milos' island Hora
View from Plaka over the Aegean
Golden hour at Plaka (Hora)
View of picturesque corner in Plaka, Milos
Milos reveals its Cycladic character, with little whitewashed houses and cobblestone alleyways
Night strolls in Milos
View on map

Another classic vista of Milos, the syrmata (fishermen’s boathouses literally built into the rocks) are the colourful centrepiece of the fishing villages of Klima, Mandrakia and Fyropotamos.

First impressions are everything on Milos, so the full Instagrammable picture comes when hiking between the three. They are only a 40-minute walk from each other and you can watch the spectacle unfold as you head down to the villages. Fyropotamos also boasts a sandy beach.

Explore the coastline by sea kayak

With all those sea caves, bays and beaches, there’s no way you won’t be tempted back out to sea… this time by kayak. There are full- and half-day guided tours in many directions. Paliohori and Provatas beaches are popular destinations to the south, as is Paliorema (and the former sulphur mine of Thiorichia above it) to the east and Glaronisia to the north. 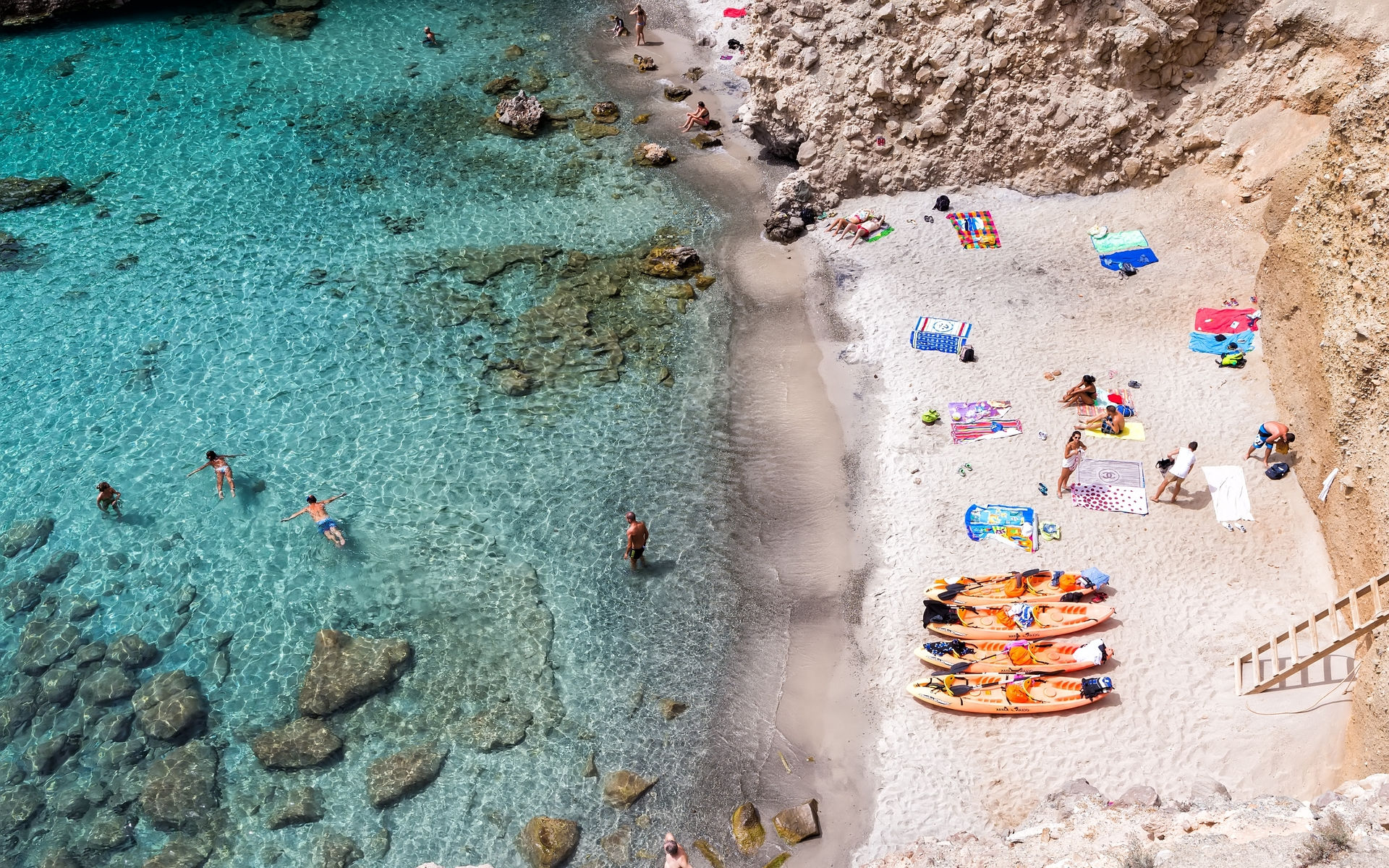 The last of your things to do in Milos isn’t actually on the island but all around it. Day trips from Adamas to neighbouring isles couldn’t be easier. Kimolos (Milos’ volcanic little brother) lies just 40 minutes away, around the same time it takes to reach Sifnos (renowned for its fine beaches and finer food) and Serifos (quintessentially Cycladic, with sugar-cubed houses appearing to tumble down the hillside). In complete contrast, there is Polyegos, the region’s largest uninhabited island and a natural escape with more great beaches and plenty of birdlife.

Take a boat trip to Polyegos

Top things to do in Milos

Milos is an island where experiences come on an epic scale – beaches, colours, cliffs and bays. But there’s also a quiet and authentic side to enjoy in the villages and fish tavernas, especially in the quieter months. So if you can visit in May and September, you’ll get to enjoy all the things to do in Milos even more.

Private
A full-day boat trip from Sifnos to truly spectacular Milos, with Kleftiko caves and Sarakiniko
Private
A wonderful tour to traditional Northern Kimolos and beautiful Northern Milos. 44 nautical miles
Private
A special day tour to discover the incredible volcanic island of Milos, one of the most beautiful places on earth.
EXPLORE ALL


See the gallery
Tsigrado beach, Milos
The more daring might opt for some cliff jumping off the rocks into the deep waters below
Above Plaka, you’ll find the Kastro district, so-called because of its Venetian walls
Local girls performing traditional music in the alleyways of Plaka
Excursion boats operate from the harbour of Psathi
Milos’ volcanic soil creating a kaleidoscope of colours
Old city of Plaka, Milos
You will find plenty cafes, tavernas and gift shops in Plaka, the capital of Milos
Sarakiniko, an extraordinary scene of chalk-white rock, smoothed and shaped by time
Enjoy local dishes in a traditional taverna in Plaka
Delve into blues and whites in Milos' Hora
Polyegos, not just a virgin landscape of pristine beaches, but an escape for rare and protected wildlife, just off Milos
Colourful fishermen's boat houses at night, Klima village, Milos
karpouzopita and coffee in milos
Golden hour at Plaka (Hora)
View of Papafragas caves
Strolling around Plaka in Milos
Exlore Plaka, Milos' island Hora
Dive from the limestone-white rocks of Sarakiniko
Paliorema, beach is often called Thiorichia after the mine, which you walk around before swimming in the beautifully clear water
Plaka is where Milos reveals its Cycladic character
sponsored by Region of South Aegean

BEST OF
12 of the best beaches in Milos

BEST OF
15 of the best beaches in Greece

COVER STORY
Island-hopping from Milos in the Cyclades

BEST OF
12 of the best beaches in Lesvos

BEST OF
10 of the best beaches in Lemnos

BEST OF
10 of the best beaches in Thassos

BEST OF
12 of the best beaches in Samos