Feel like the star of your own photo shoot as you explore a unique setting of chalk-white rock and azure-blue sea on the northeastern coast of Milos, and prepare to fall in love … to the moon and back. 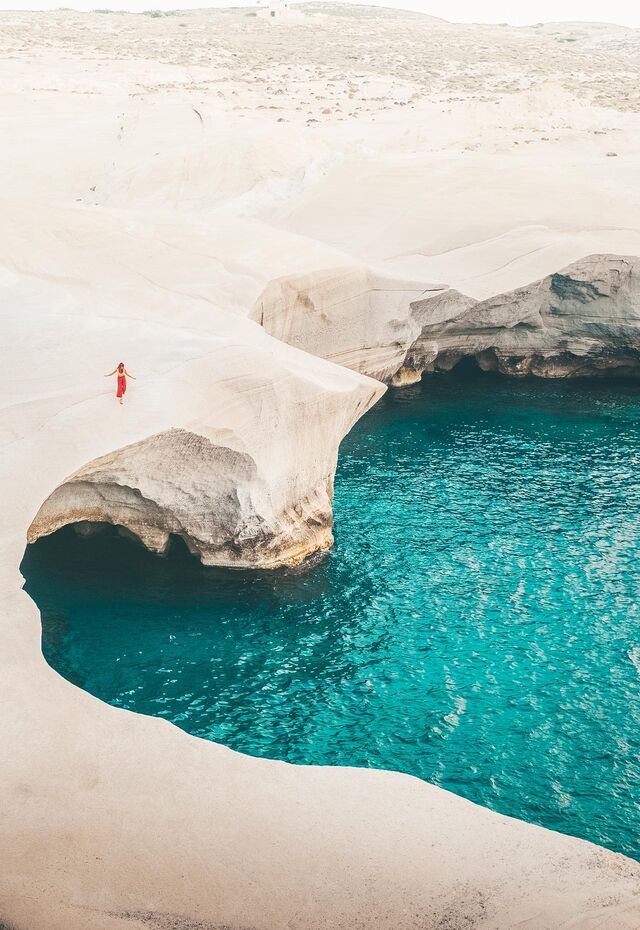 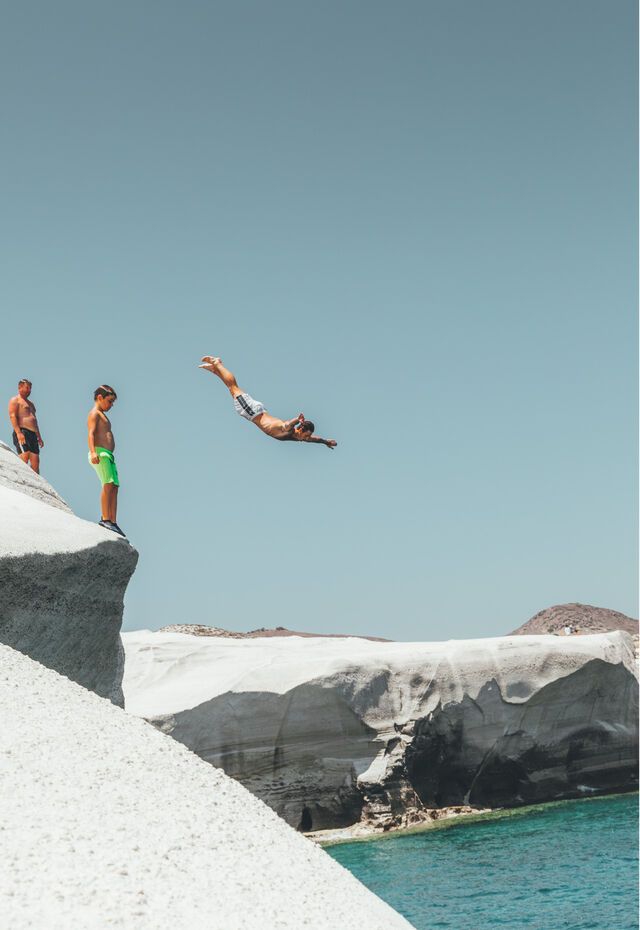 For those of you who have always harboured a wish to travel to the moon (and maybe do a little sunbathing whilst you’re there), your answer lies on the island of Milos. Sarakiniko is Greece’s lunar landscape: an extraordinary scene of chalk-white rock, smoothed and shaped by time, and all the more dramatic for its contrast against the azure sea beyond.

Named after the Saracen pirates who once used it as a hideout, Sarakiniko Bay is coastline wilderness at its most alluring. There’s even a partly-exposed shipwreck that you can explore, adding to the sense of drama.

There’s a good chance you’ll have seen Sarakiniko, even if you haven’t yet visited. It’s been the setting for countless new-season fashion photo shoots, with the contours and colours of the eroded volcanic ash, sandstone and pumice stone serving as a unique backdrop. So before settling down on the narrow, peninsula-sheltered sandy beach, it’s worth exploring. There’s even a network of abandoned mines and caves.

The more daring might opt for some cliff jumping off the rocks into the deep waters below (don’t rule it out until you’ve watched others doing it). You could spend the rest of the afternoon lazing on the rocks.

A final tip is to stay till sunset and, if you get the opportunity, definitely visit at night when there’s a full moon. The effect is otherworldly.

Read More Read Less
See the gallery
In Sarakiniko, you can literally spend a whole day lazing on the rocks 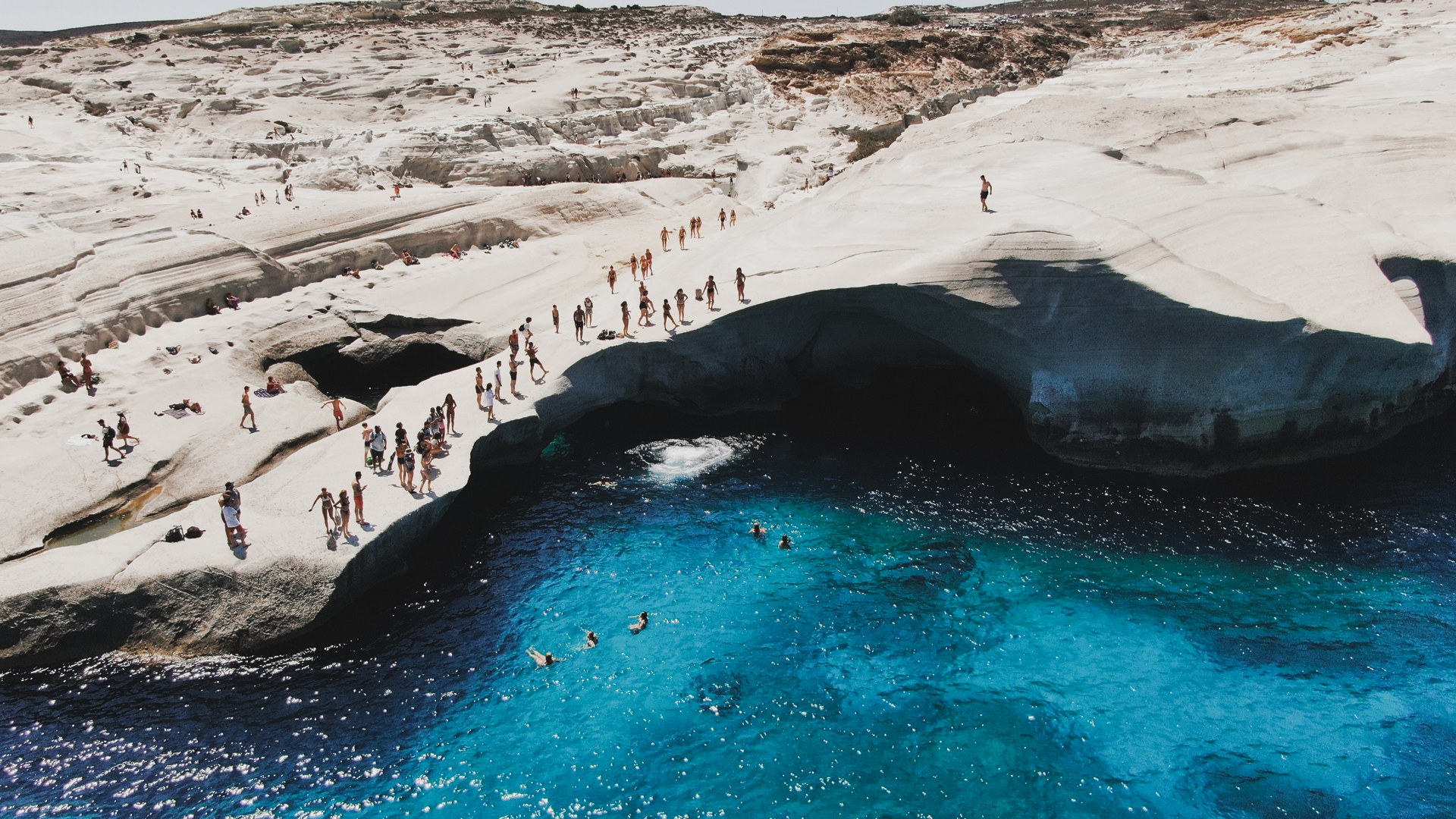 Dive from the limestone-white rocks of Sarakiniko 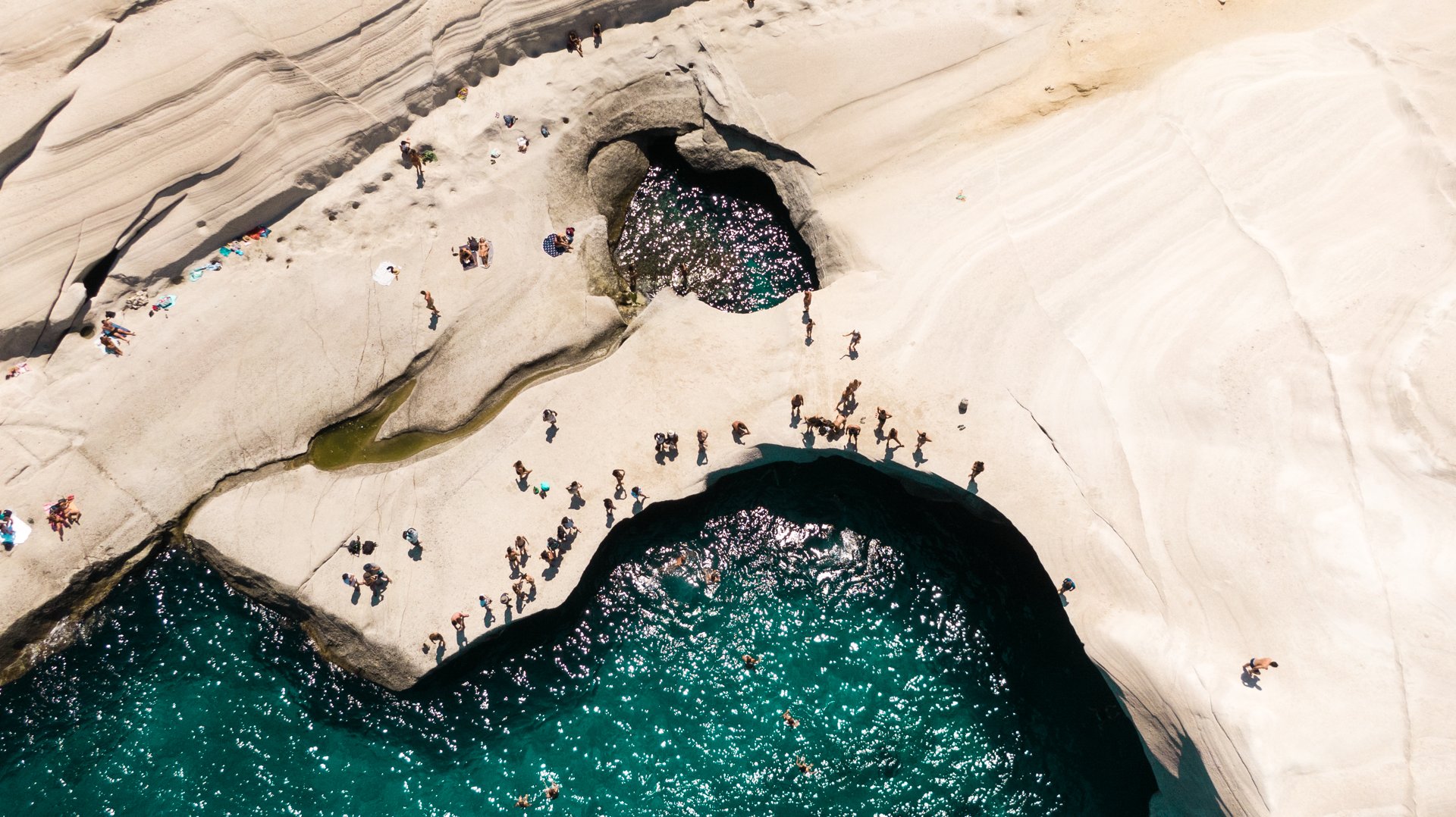 The lunar landscape of Sarakiniko in Milos island 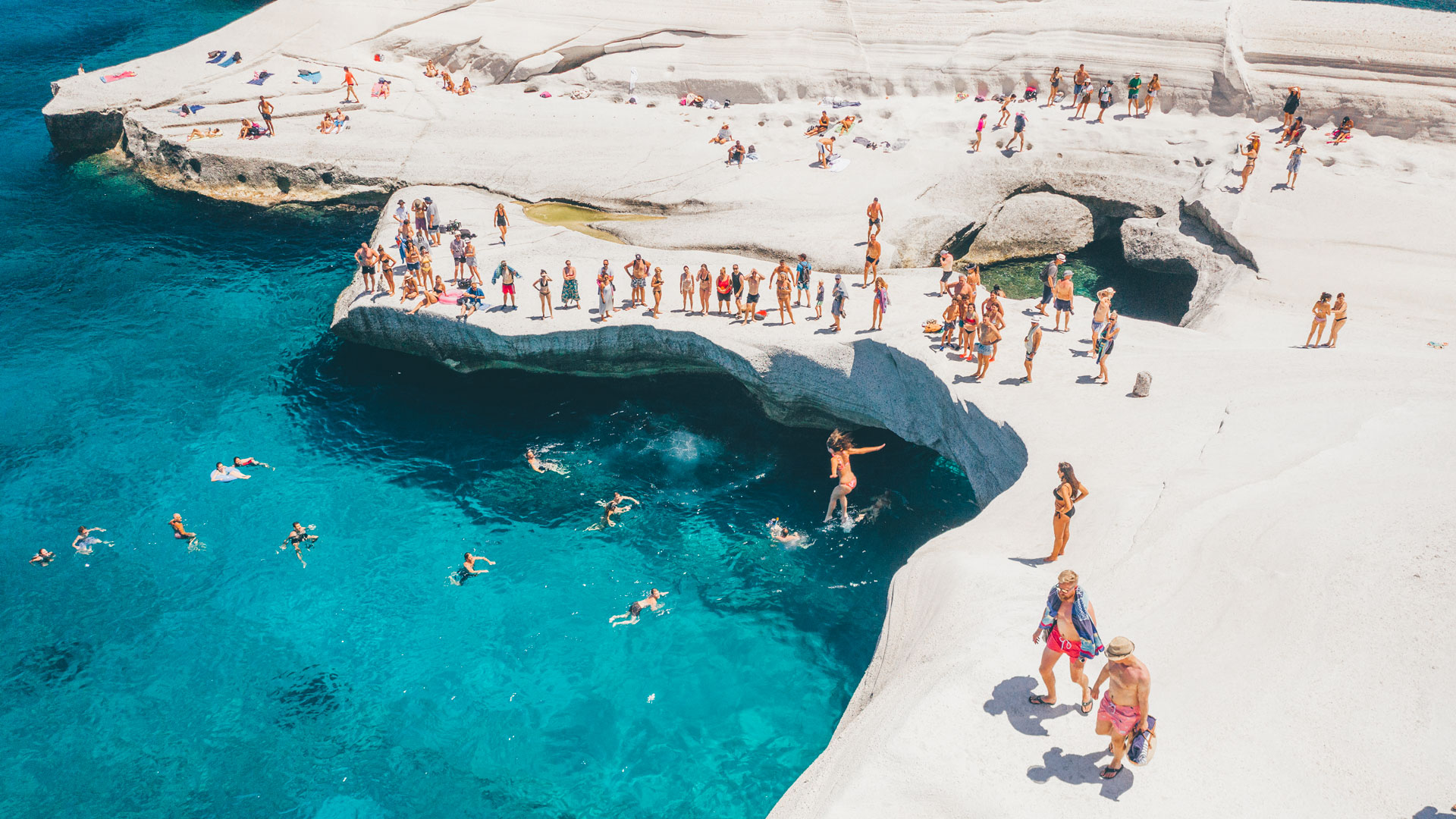 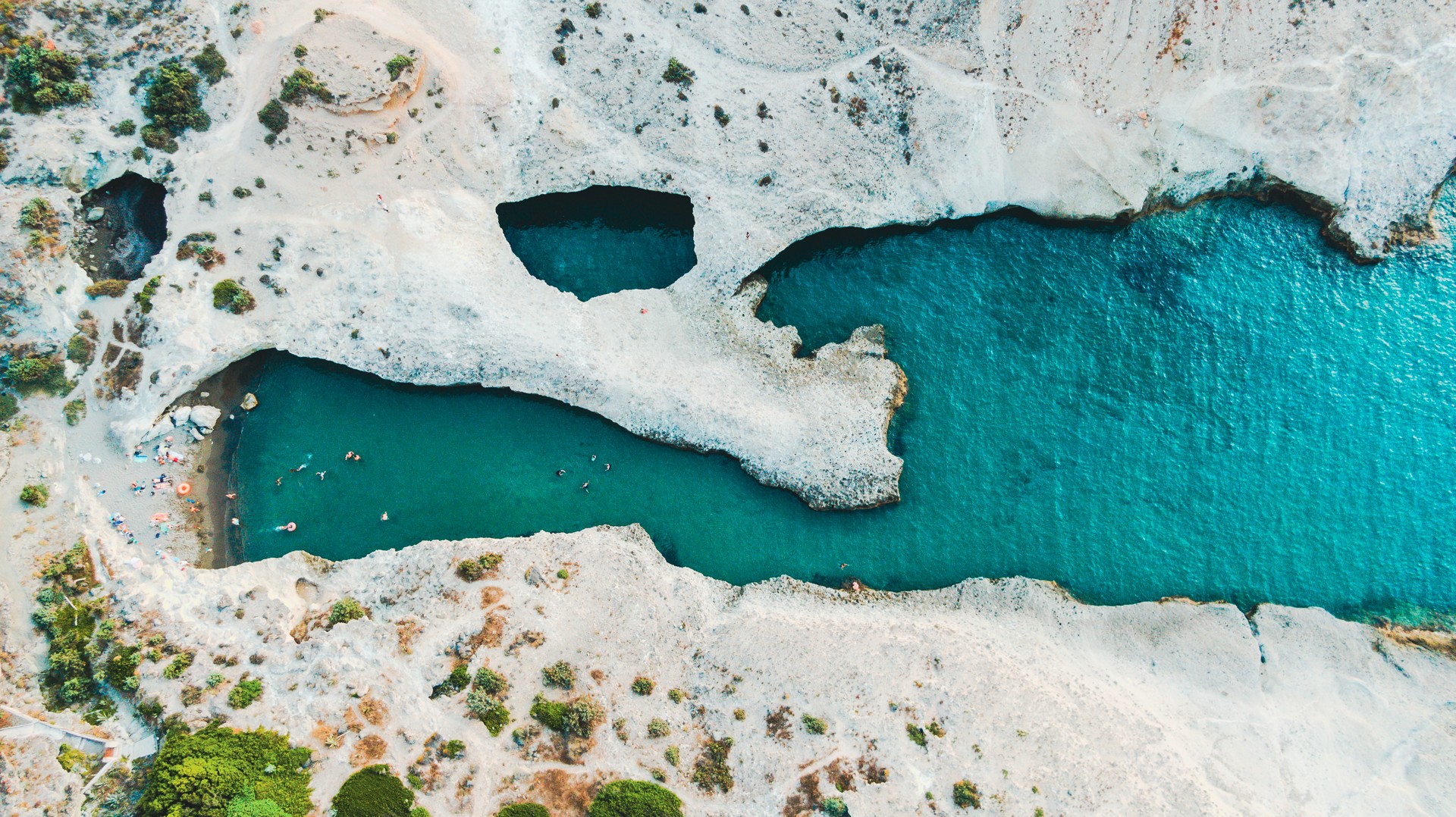 Sarakiniko, an extraordinary scene of chalk-white rock, smoothed and shaped by time 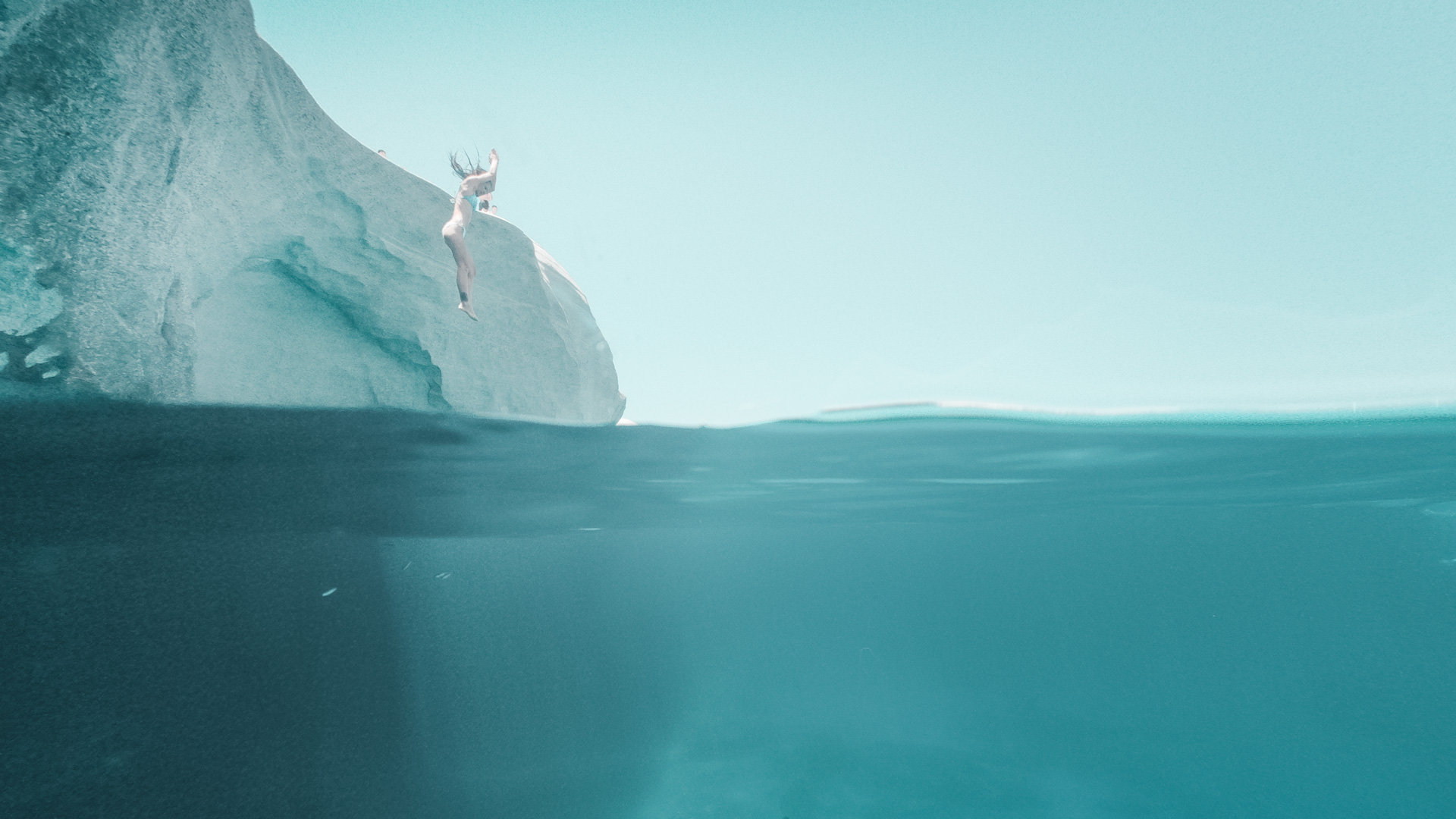 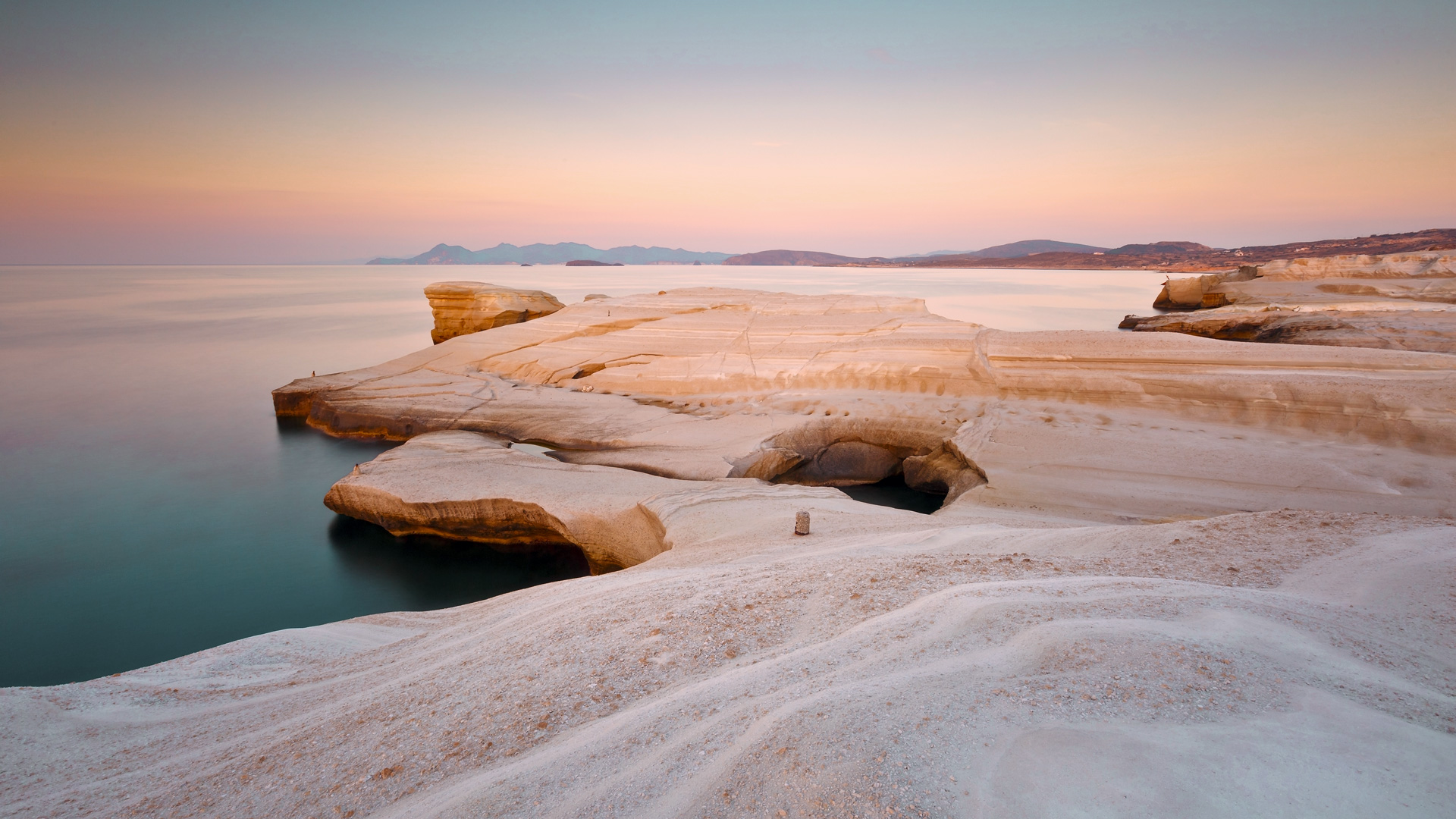 Tip-You should definately stay till sunset in Sarakiniko, the effect is otherworldly 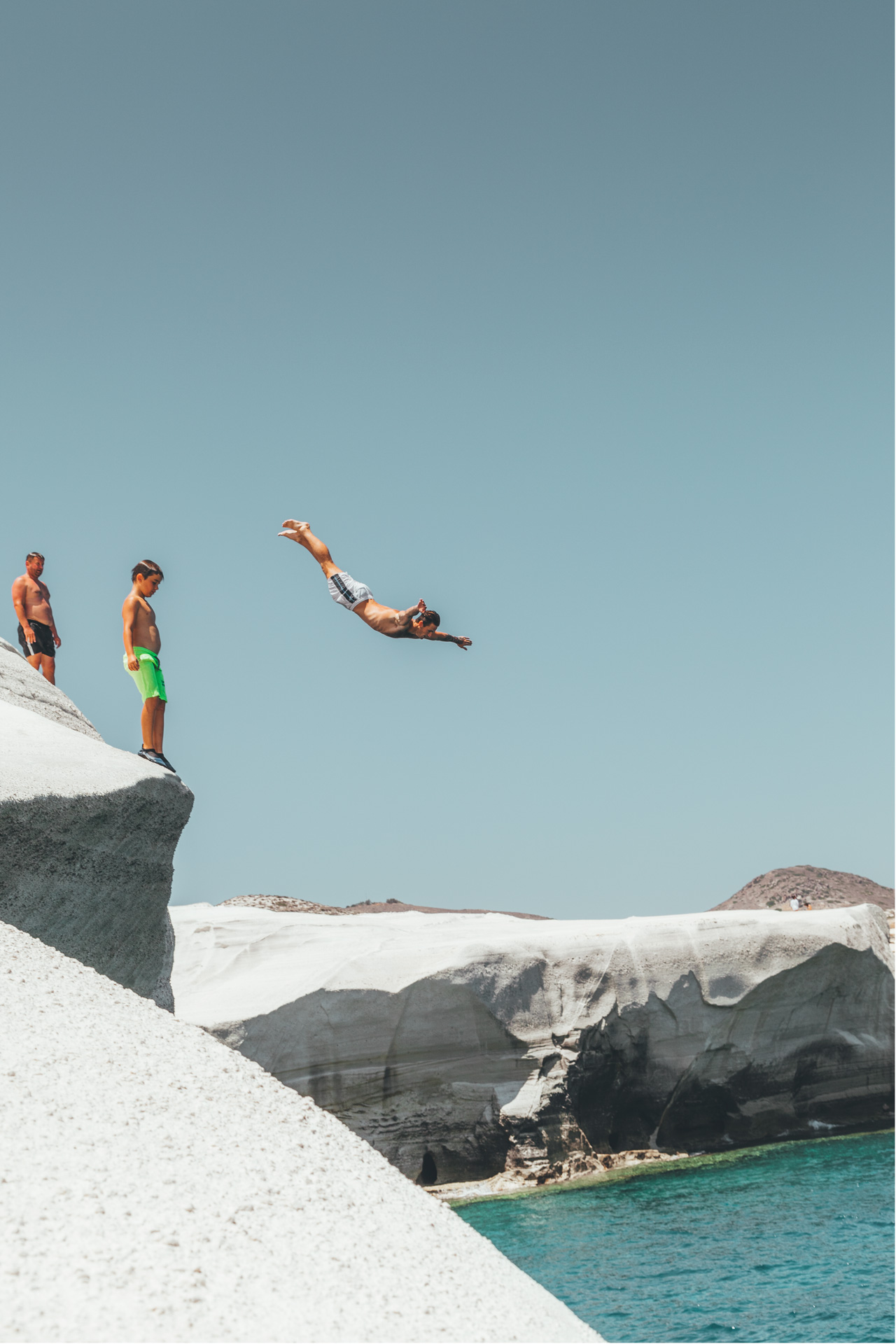 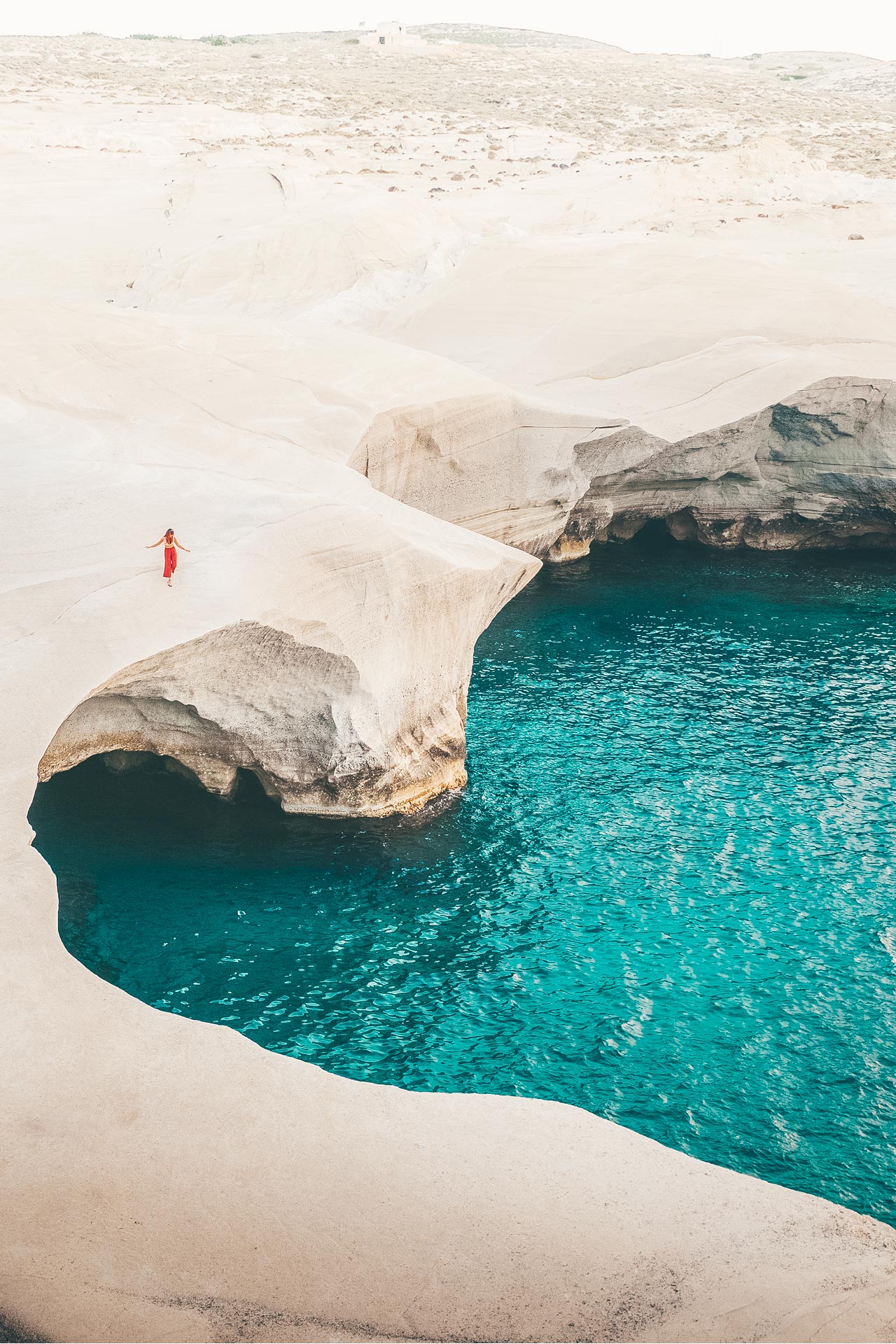 Incredible Sarakiniko beach, a trip to the moon in Milos island
Marketing Greece 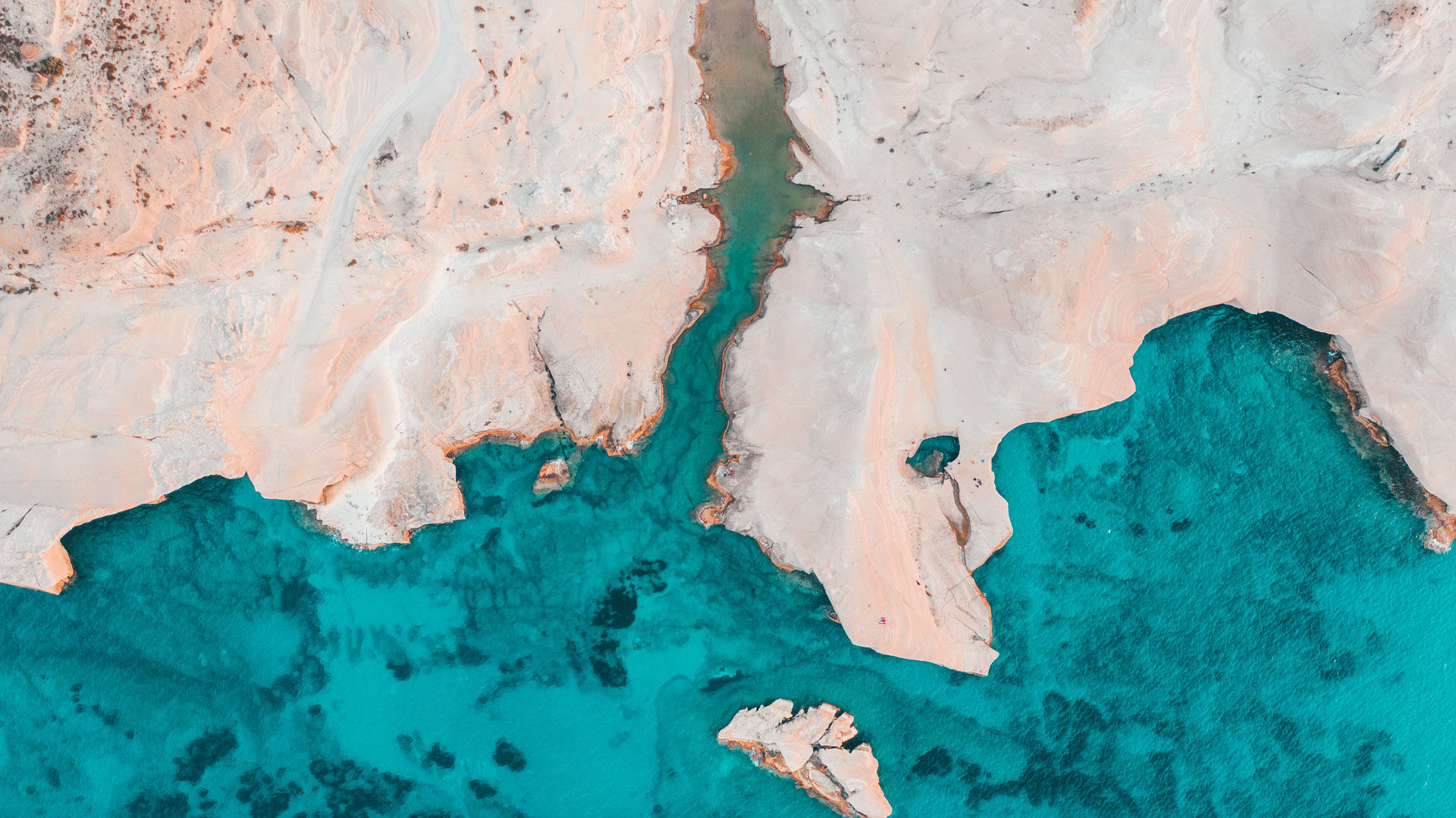 Private
A special day tour to discover the incredible volcanic island of Milos, one of the most beautiful places on earth.
Private
A wonderful tour to traditional Northern Kimolos and beautiful Northern Milos. 44 nautical miles
Private
A full-day boat trip from Sifnos to truly spectacular Milos, with Kleftiko caves and Sarakiniko
EXPLORE ALL

You’ll arrive at a parking area at Sarakiniko, from which it’s a 200m walk down to the beach.

From airport to Adamas

There’s a canteen by the parking area, but otherwise there are no facilities on Sarakiniko beach. 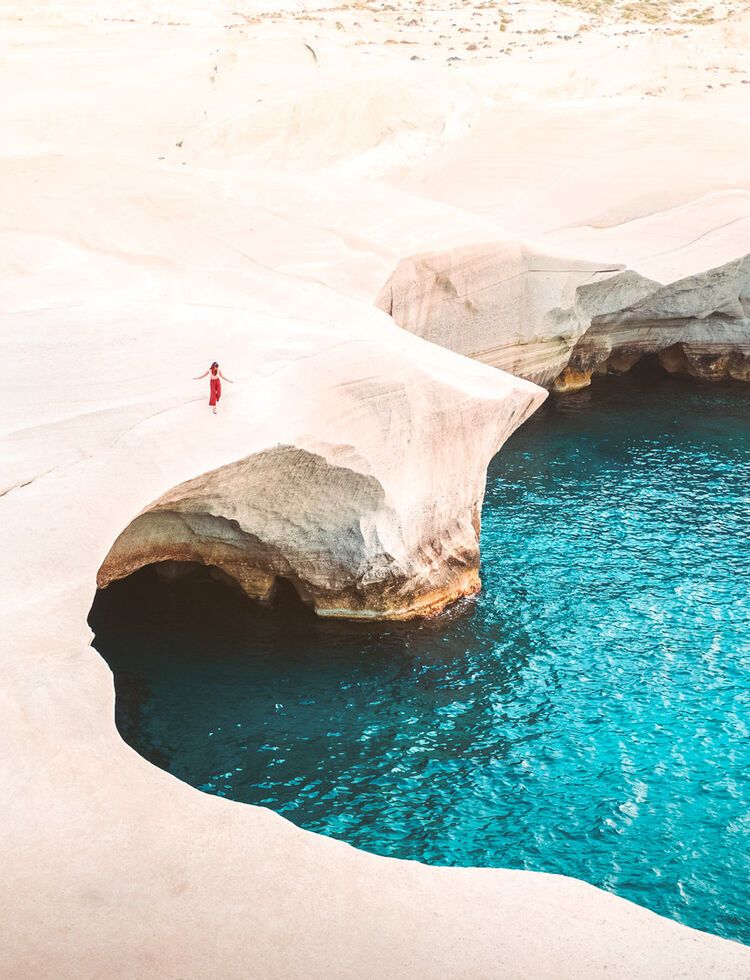 All the colours of nature and beaches to match
Discover It 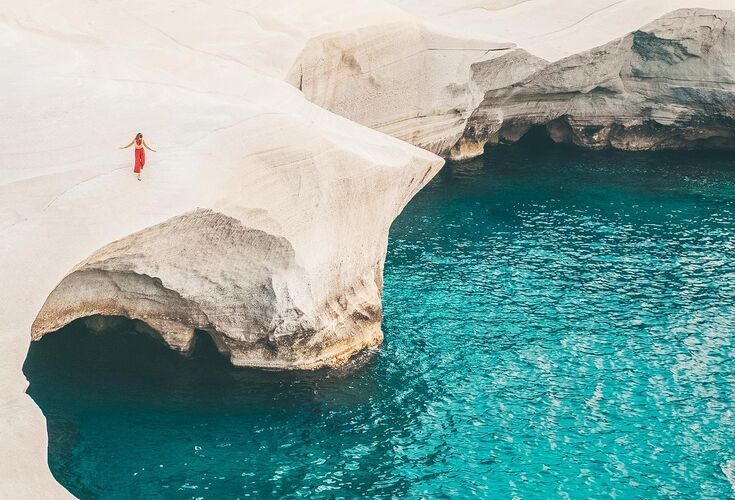 EXPERIENCE
A boat trip to the natural escape of Polyegos

EXPERIENCE
A day at mythical Giola Lagoon in Thassos

EXPERIENCE
A day on Panormos beach, soaking up the best of Skopelos