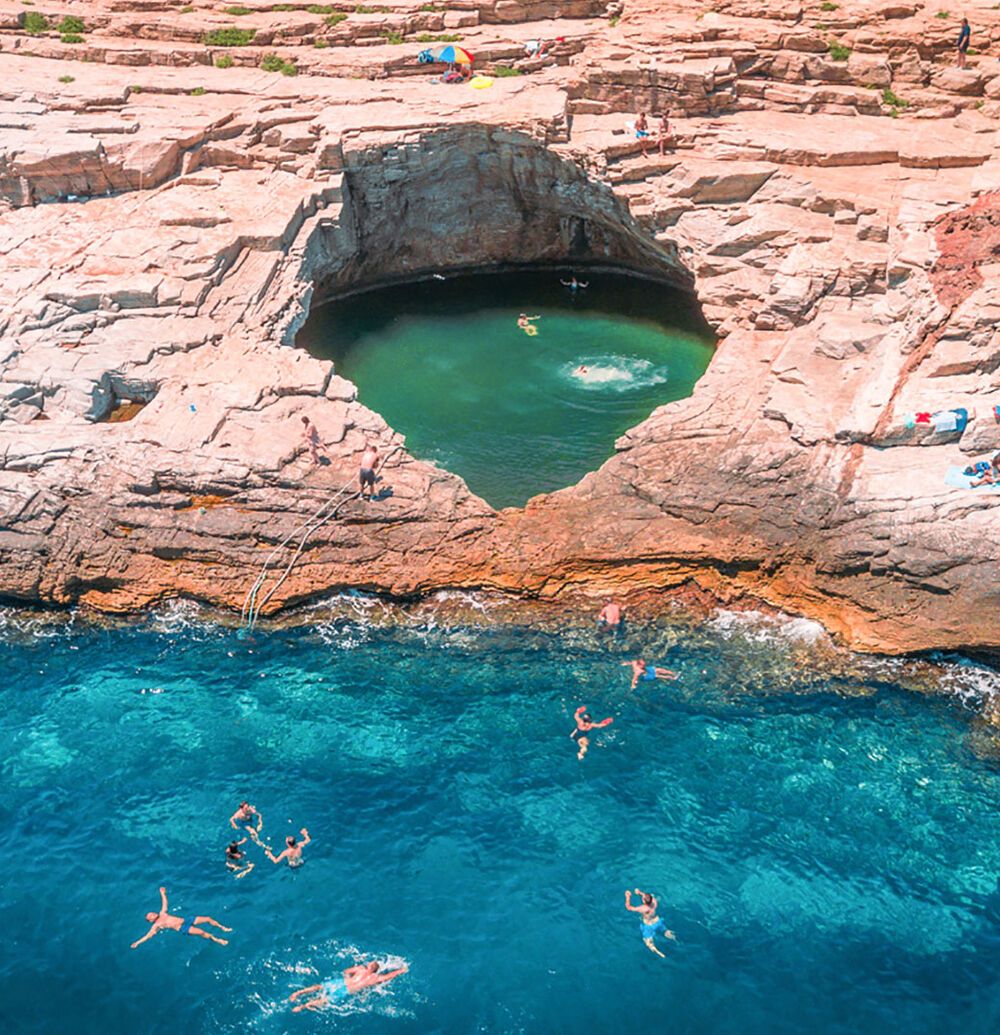 An island of intense greenery and exotic beaches, Thassos is a gem in the North Aegean awaiting discovery. Getting there couldn’t be easier, with regular ferry crossings from Keramoti, just 15mins from Kavala airport in northern Greece. You’ll return with a long list of reasons to visit… but just five will do!

Giola, take a bow! You’ve made it to No.1 and also won the award for most Instagrammable spot on Thassos. Which takes some doing. The locals call this 20x15m rocky sea lagoon, on the southern tip of the island, Aphrodite's Tear and it is without question eye-wateringly beautiful. A natural pool, carved into the rock by the sea, its water never fails to offer beautiful contrasts. Best of all, its back reaches 8m, perfect for a dive, summersault, bomb or just a lazy flop into the pool. You choose your style. And when you’re done, spend the rest of the afternoon swimming or lazing on the rocks. The experience is magical. This is Thassos at its natural best.

Enjoying the sea is something you’re going to do a lot of on Thassos. There are so many wonderful coves and beaches right around the island – some pocket-sized and others larger and more organised. It seems wrong to single any out, but let’s try. Aliki Beach, on the southeastern tip, captures the very essence of the island – shimmeringly beautiful water, a backdrop of pine and olive trees and even an ancient marble quarry nearby.

Elsewhere, there is Marble Beach – a small, isolated bay to the northeast, with tiny white pebbles and marble fragments in the sea giving the water its exotic colour. The umbrellas and a beach bar are a testament to its growing popularity, but nothing detracts from the beauty. Just up the coast are Makryammos (2km from the capital, Limenas) with shallow water, fine sand and shade making it ideal for families, and the less-organised Glyfoneri, with golden sand, pine trees and taverna at one end. Back on the south coast is beautiful Arsanas Beach, just below the Monastery of the Archangel Michael, and Paradise Beach. It takes something to be given such a name on Thassos, but it more than does it justice.

Head to the hills for a taste of tradition

Imagine sunbathing on the beach in the morning and sitting in the taverna of a mountain village in the afternoon. That’s what Thassos offers. Set amidst all that mountain greenery are villages that offer a taste of traditional island life. Panagia, to the northeast, is 300m above sea level, offering a wondrously cooling contrast to the midday heat. You’ll find narrow, cobblestoned streets, stone buildings and a main square with not one but three springs. And there’s an olive mill, where you can observe olive oil production using a traditional watermill.

Other villages are Theologos, to the southeast, with 600 permanent residents. You can visit the mansion of Hatzigeorgis, a renowned resistance fighter during the Turkish occupation, which has been turned into a museum, and each August the village puts on a re-enactment of a traditional Thassian wedding. To the west is Kazaviti, the oldest village on the island. Perched on the mountainside, it is in fact two villages (‘Small’ and ‘Large’ Kazaviti) with fantastic sea views. There’s a stone theatre here which stages a summer festival, showcasing traditional music and dance events called Kazavitiana.

Thassos is famous for its seafood. From sardines, anchovies and prawns to sea bream, red mullet and squid and octopus. There's a huge and delicious variety and you’ll enjoy all of it. And with so many hills, streams and greenery, there is also a great choice in meat products. Goat and lamb are definitely recommendations in a mountain taverna. Thassos is also renowned for its olive oil. It even has its own distinctly wrinkled olive, the Thassian Throuba Olive, which produces exceptional extra-virgin olive oil with low acidity. And we end our culinary tour with something deliciously sweet… honey. With bees feeding on all those herbs and greenery, Thassian honey is renowned for its rich flavour. It is used to finish all manner of local sweets and pies, made with walnut, fig, pumpkin and other local products. Just make sure you leave some space to take some home with you.

The crafts & local products of Thassos

And don’t forget to soak up the culture

Don’t forget to explore the history and culture of this fascinating island. Rich in silver, gold and marble, Thassos received a lot of attention during antiquity, the Middle Ages and Byzantium, and was also occupied by the Ottomans when many islanders sought refuge in mountain villages. So as well as its collection of hotels, cafes, tavernas and bars, the capital Limenas also has many cultural highlights. The Archeological Museum tells the story of the island since the 7th century BC, but just wandering through the old port will give you a feeling for its traditions. The Kalogeriko, a two-storey building belonging to Mt Athos’ Vatopedi Monastery, has been fully renovated to host painting and photography exhibitions.

Elsewhere, make sure you visit the Acropolis, on a plateau above Limenas. Walking around the peninsula from the Acropolis, you reach the Ancient Theatre, overlooking the sea. And heading back to the capital, you reach the Ancient Agora, the original political, administrative and religious centre of the island. And you can visit an ancient marble quarry, to see where the famous snow-white material, prized by so many generations of settlers, comes from. It was, literally and metaphorically, the material on which Thassos was built.

Thassos island: A treasure trove in the North Aegean

So there it is... Thassos, an island of magical blues and greens, offering beach relaxation and mountain charm in equal measure. You’ll arrive with a glint in your eye knowing you’ve uncovered something special and leave with a promise to return. And best of all, those colours become are even more intense in May-June and September, when the experience becomes even more intimate.

Bonus: With all that island blue and green, it would be tempting to feel completely satisfied with Thassos alone, but let us tempt you with an unexpected bonus. Straddling east and west, the city of Kavala is just 35km from Keramoti port and has a fascinating history. You’ll see it, taste it and learn about it in everything you experience. Tempted?

Group
Set out on a magical journey through time visiting Pella,the glorious kingdom of ancient Macedonia and Vergina, the ancient first capital of the Kingdom of...
Group
2 Day Hike Olympus is a mountainous 2 day adventure tour on the legendary Mt. Olympus, home of ancient Greek Gods!
Group
2 Days Sea Kayak Diaporos Islands is a trip along the eastern side of the Sithonia peninsula is an unforgettable experience that offers almost everything
EXPLORE ALL

A For Art Hotel Thassos

BEST OF
10 of the best beaches in Thassos