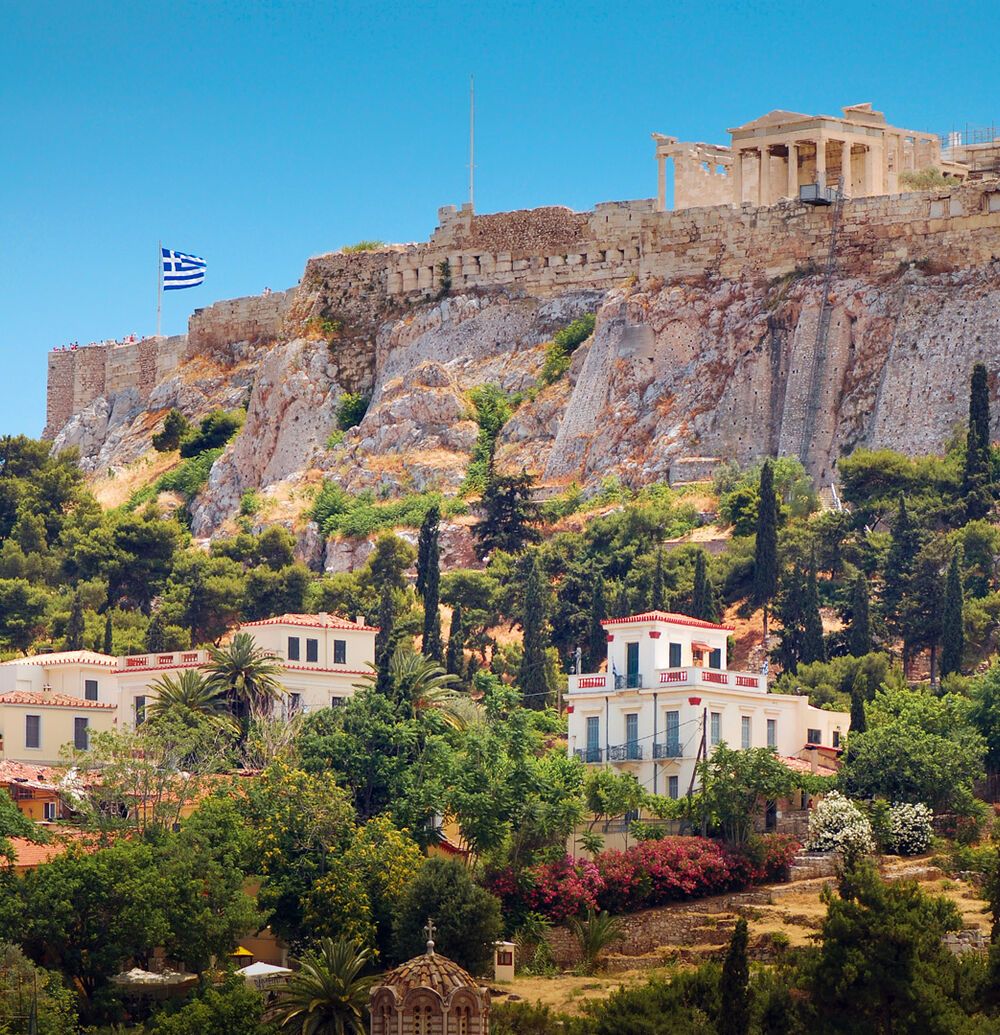 THE 5 MOST POPULAR ROUTES IN ATHENS

Pedestrianised shopping streets, picturesque alleyways and hidden gardens invite you to discover the secret paths of Athens. Add to this picturesque old markets, galleries with modern art exhibits and antique shops. For you to fully enjoy all that’s happening in Athens, it’s time to take to the streets.

Take a walk in the garden of kings

A green oasis in the centre of the city, the National Garden embraces the Greek Parliament building and continues south to Zappeion. It was once the Royal Garden, commissioned by Queen Amalia, who imported hundreds of plant species. The garden’s boundaries were drawn in 1839, reaching a total of 155 acres.

Extending from the Presidential Mansion to the Maximos Mansion (the official seat of the prime minister), and from the Olympic Stadium to the Columns of Olympian Zeus, the gardens of Zappeion are a popular space for rest and recreation in the centre of the capital. The Zappeion Mansion – a semicircular neoclassical building with a Corinthian portico – was completed in 1878 by the Danish architect Theofilos Hansen and is particularly special. It’s worth walking through the painstakingly tended gardens where you can also stop for a coffee or a bite at the cafe-restaurants.

Fill your lungs with the unexpected green spaces of Athens

Filopappou Hill, in the company of muses

Formerly called Hill of the Muses, this bucolic paradise, with its Mediterranean foliage and aroma of pine, rewards those who take a stroll here. Don’t miss the Byzantine chapel of Agios Dimitrios Loumbardiaris, hidden among the trees.

The most beautiful historic stroll

The walk along Dionysios Areopagitis and Apostolos Pavlos streets (the neighbourhood beneath the Acropolis) is one of the most beautiful in the centre of the city. Sidewalk cafes, the New Acropolis Museum and row upon row of elegant neoclassical buildings facing the Acropolis will welcome you as you begin your stroll.

Next, you’ll come across the Herodion, the ancient theatre that still hosts live performances and has been active on the international art scene for more than half a century. Take a detour to visit the Pnyx archaeological site and continue on to Apostolos Pavlos where the entire neighbourhood of Thisseion unfolds before you, with dozens of coffee shops, ouzeries and restaurants populating its wide sidewalk. Discover the Hill of the Nymphs, with the Temple of Pan, then head to the Institute of Astronomy and Astrophysics, and take in the panoramic view of Piraeus and the Aegean.

The cultural wealth of Athens revealed in a stroll

At a short distance from the city, the urban landscape gives way to a unique seaside resort, the Athens Riviera. This is a gorgeous stretch of coastline with its green-blue water, organised beaches and rocky coves, with five-star resorts, spas, esplanades, marinas, windsurfing and sailing. Fishermen bring freshly caught fish to traditional tavernas and gourmet restaurants.

At the southernmost tip of this coastline is the Temple of Poseidon at Cape Sounion, one of the most important temples of Ancient Greece. Sea, light and an infinite sky unite in this landscape, creating a timeless, idyllic holiday setting.

The so-called golden square of Athens’ city centre buzzes with life. It is home to historic cafes, designer stores, the renovated Pallas Theatre and the Spyromilios Arcade. What even Athenians may not know is that the previous Army Pension Fund mansion, a characteristic example of public architecture from the 1930s, housed the royal stables during the Ottoman period and in 1923 it was even a circus! Across from Attica-Citylink is the garden of the Numismatic Museum, where you’ll have a coffee in one of the most beautiful gardens of Athens.

Private
Athens' street art scene is one of Europe’s hottest, home to local and international street artists alike. Join us in this alternative art tour with...
Group
Athens Sea Kayak is a life time experience along the Athenian Riviera! All the way to Cape Sounion and the famous Temple of Poseidon.
Private
Enjoy the ultimate self-guided tour, solve spatial quizzes and discover the secrets of Acropolis Monuments. With Goddess Athena avatar by your side, the more local...
EXPLORE ALL
Offer

Athens
from 86 €
BOOK NOW
VIEW ALL
Book your trip


See the gallery
Make sure you have a stroll through the gardens, past Zappeion Hall
Watching the palm trees in the city centre of Athens-National Garden
Strolling around the picturesque alleyways of Plaka
Women gazzing at designer dresses
Designer and concept stores in the centre of Athens
Unique concept and designer stores fill the centre of Athens
Monastiraki square from above
The National Library of Athens
The Acropolis hill in Athens