Fill your lungs with the unexpected green spaces of Athens

Perfect for picnics, strolls and jogs, Athens’ parks and hills offer a serene counterbalance to the energy and bustle of the city centre 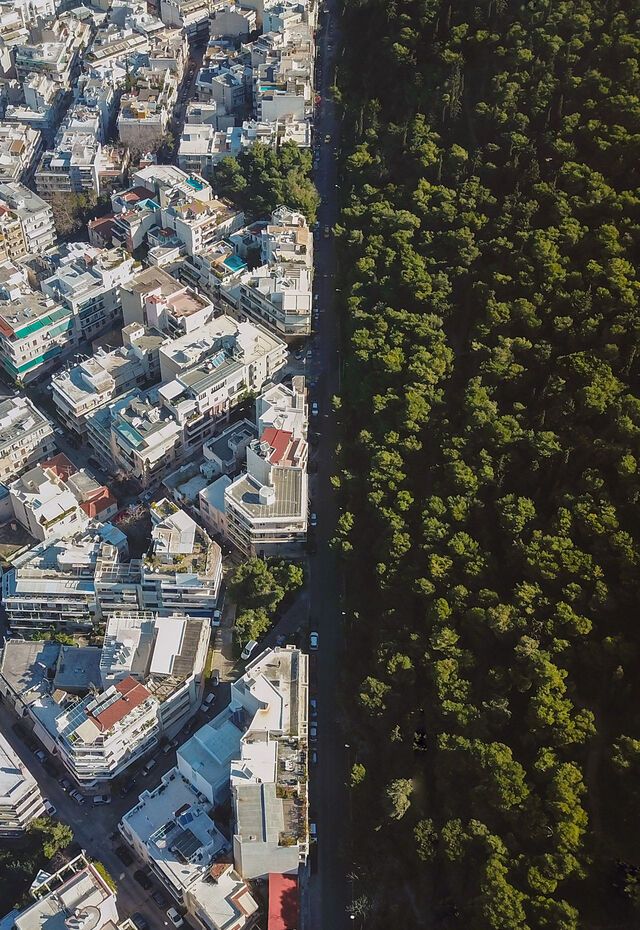 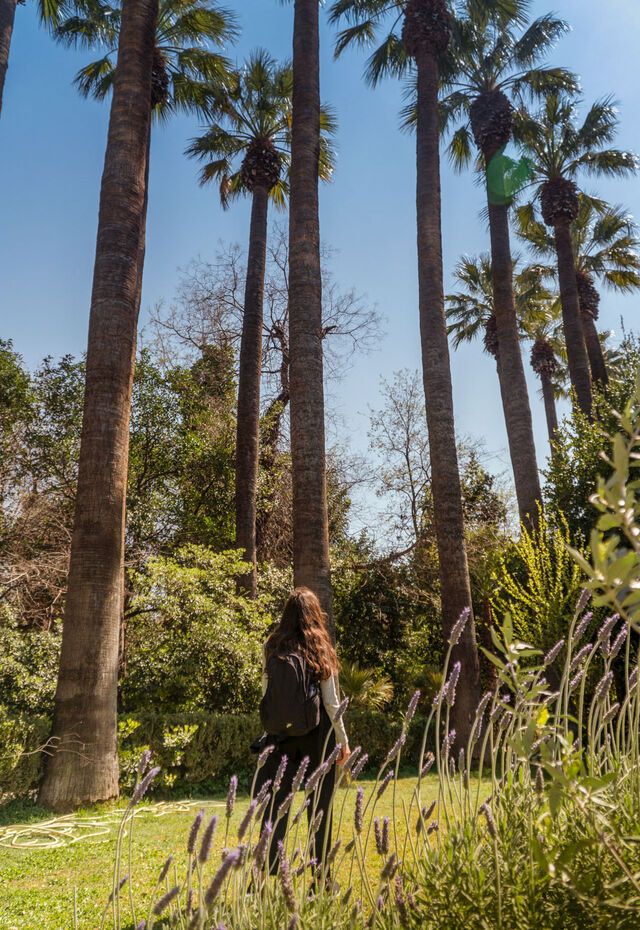 View on map
Duration
2 - 5 hours
Season
All year round

You’ll already know about all the culture that awaits you in Athens. And you’ll probably have heard about the revolution in food and entertainment that have made it one of the hottest city breaks in Europe. But who’s heard about the greenery? Well, you’ll be astounded by the number of hills, parks and even woods right in or near the city centre.

Feel like a quick ice cream or chilled coffee before or after a museum visit? In the mood for a picnic rather than a taverna lunch? Want the kids to let off steam or looking for somewhere in the shade to read your book (maybe even with a view of the Acropolis)? Or what about your morning jog or yoga exercises? Wherever you are, there’ll be a green space nearby.

Each offers a healthy dose of fresh air and a soothing counterbalance to the energy and buzz of the city centre. And, as you’ll quickly discover, they’re a cherished part of daily life for many Athenians. 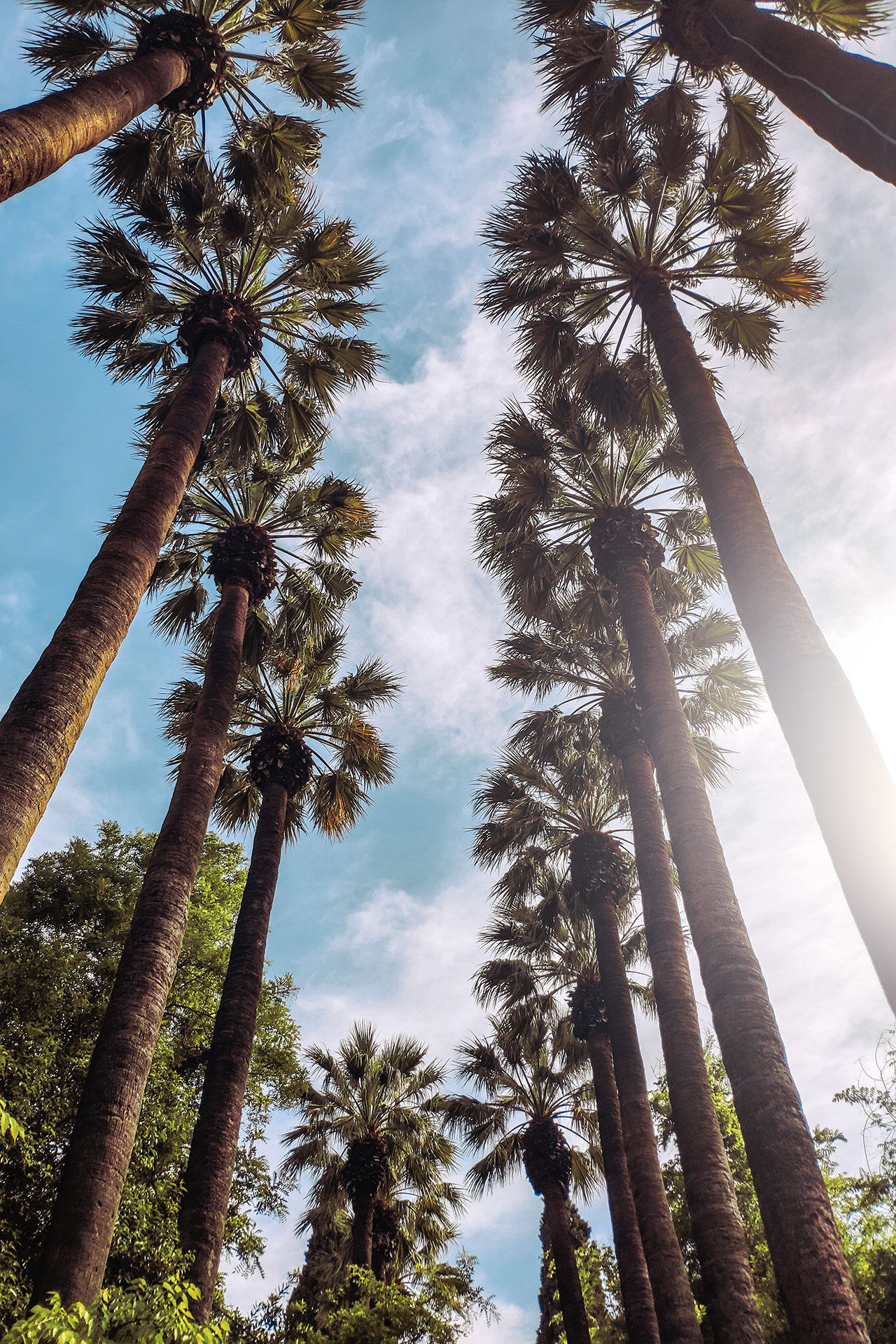 Palm trees in the National Garden 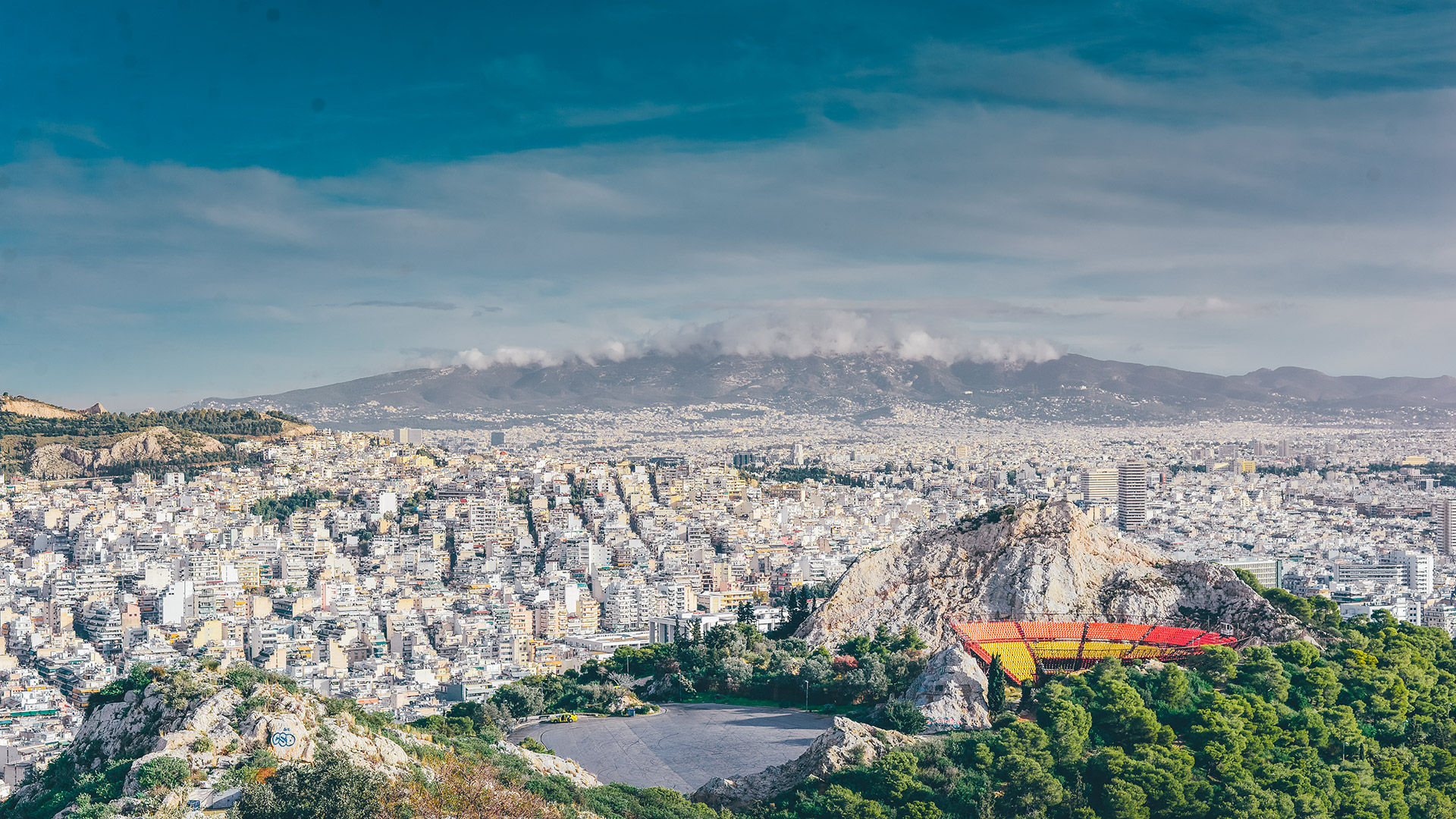 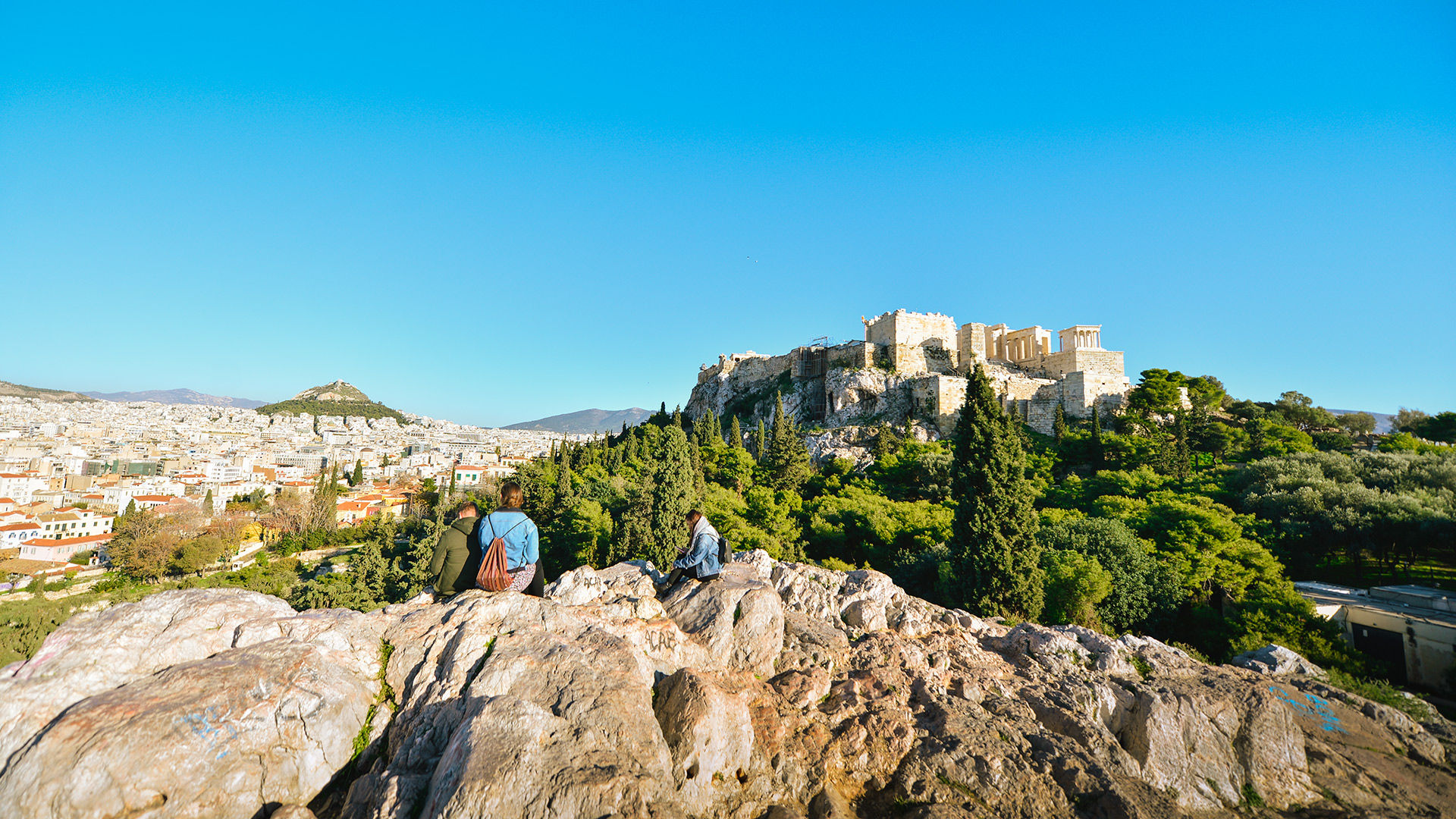 View of the Acropolis drom the Pnyx, the meeting place of democratic legislatures in antiquity 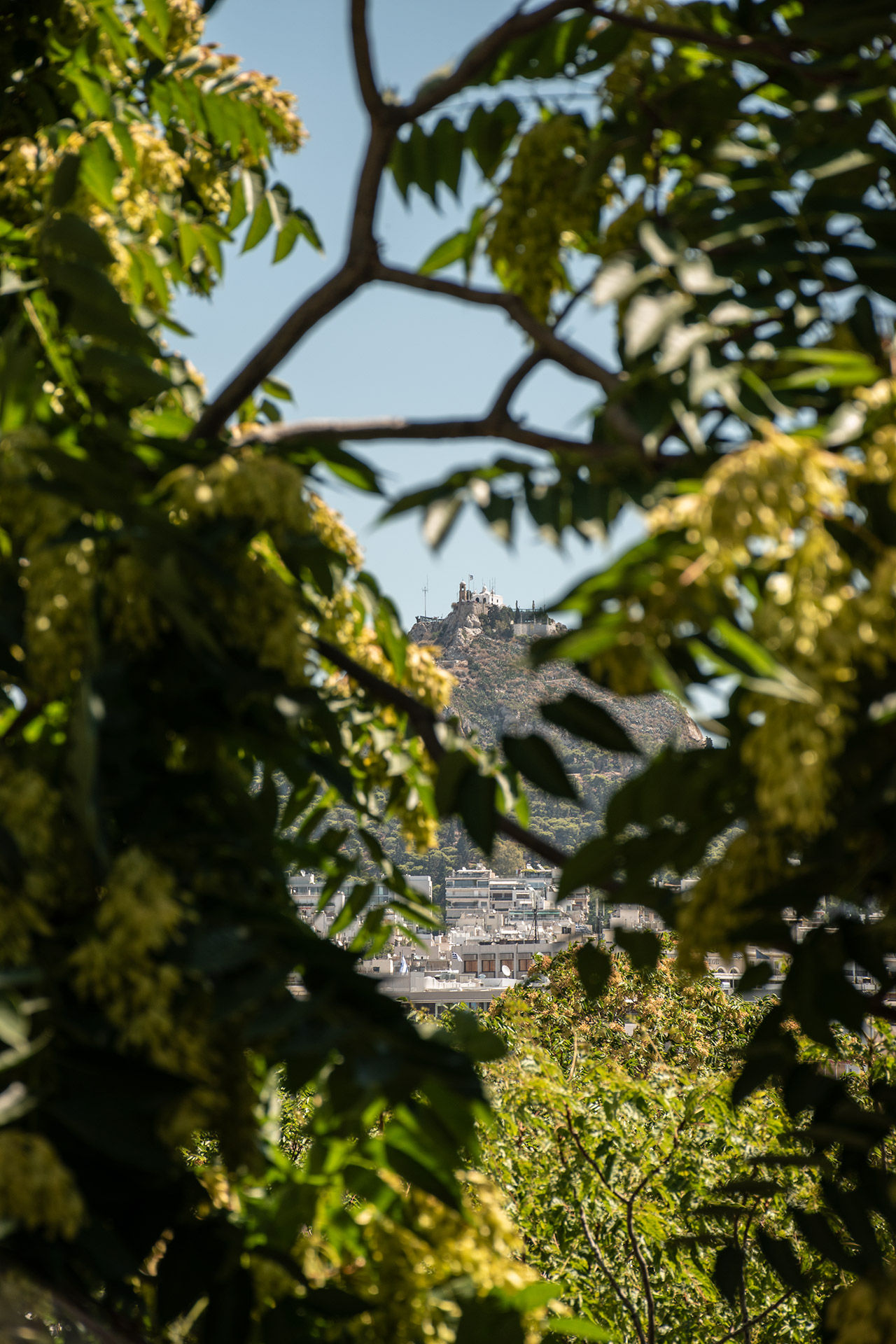 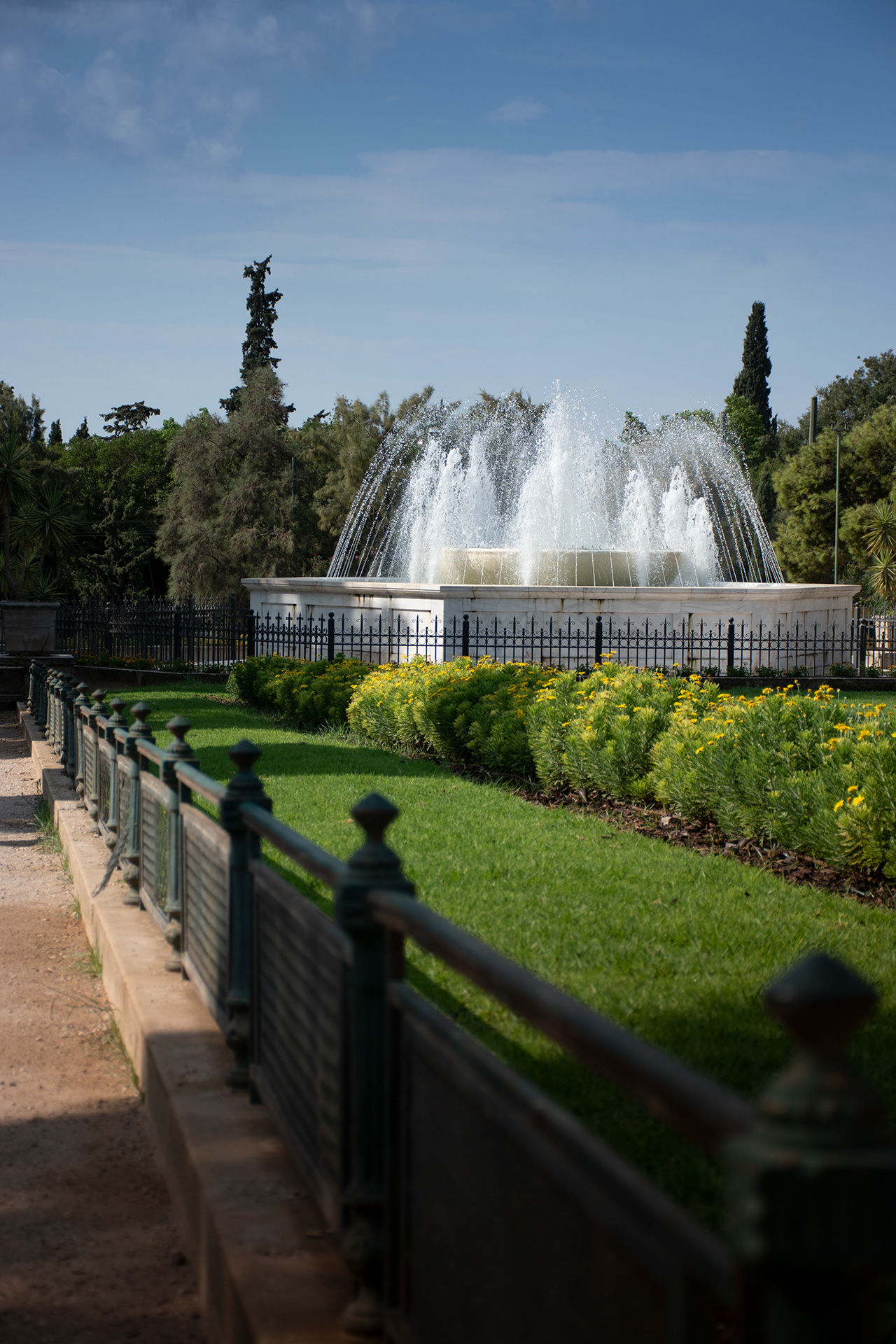 View of fountain and greenery in Zappeion park 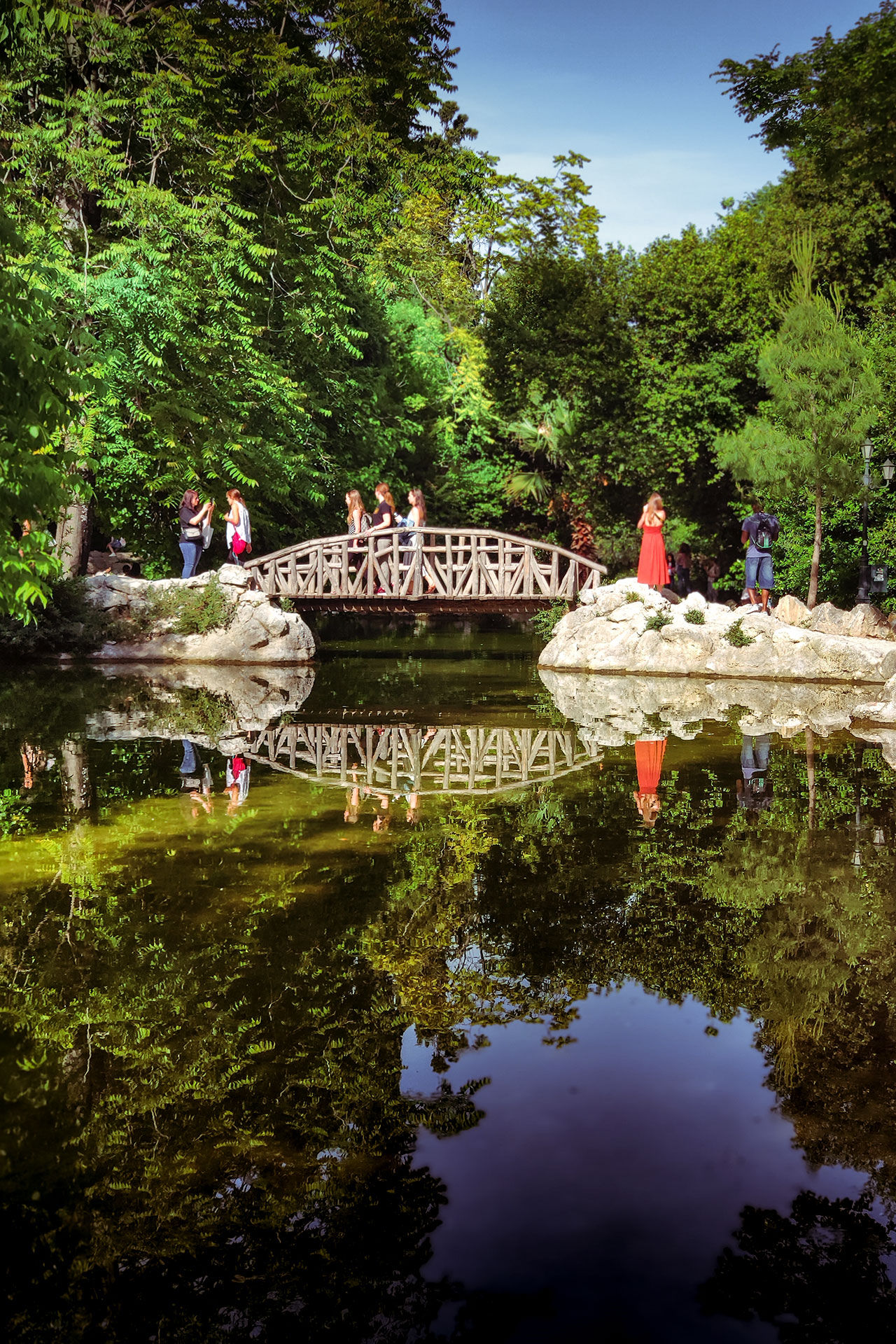 In the National Garden you will find ponds and wooden bridges 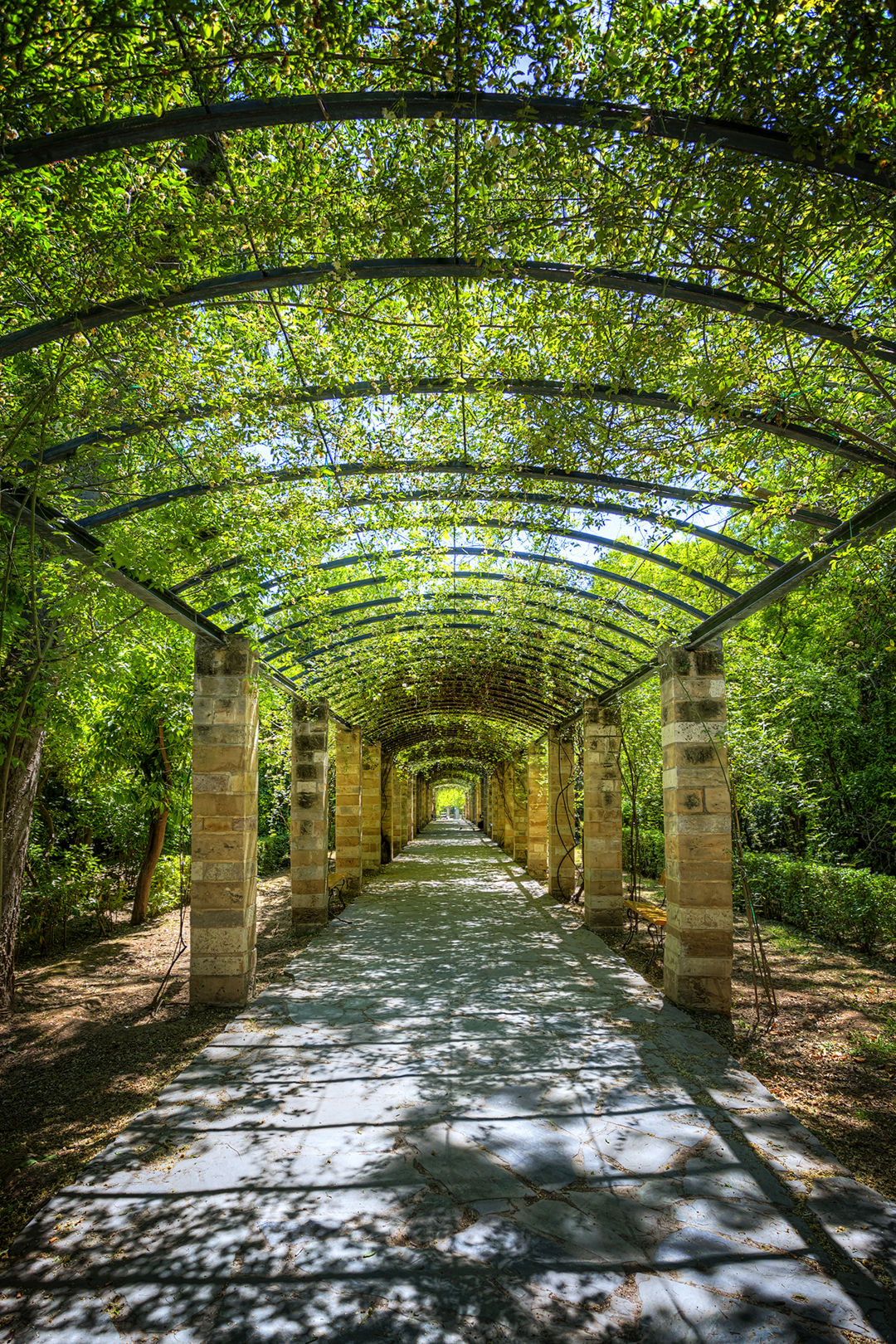 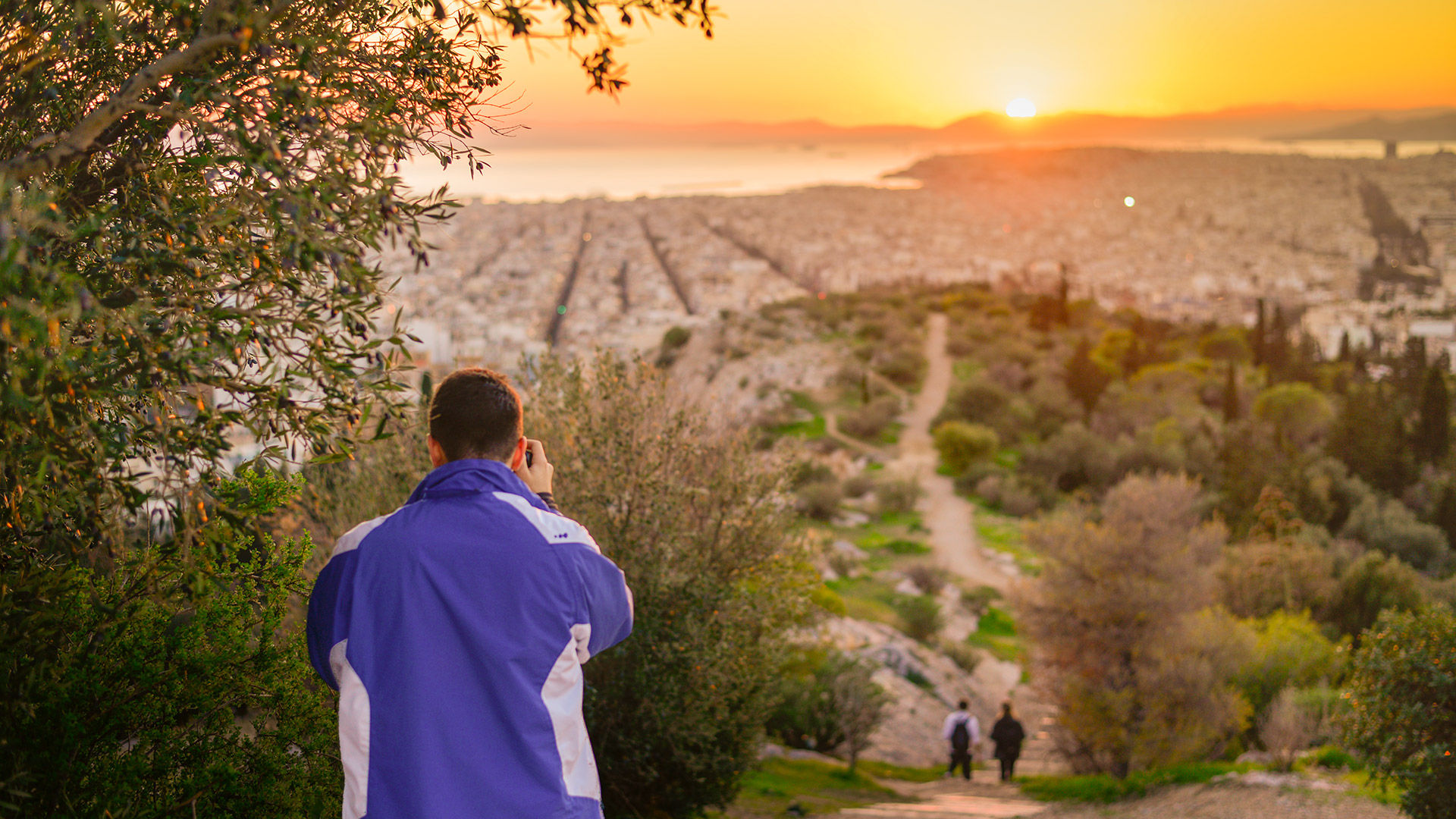 Philopappou Hill opposite the Acropolis is steeped in history 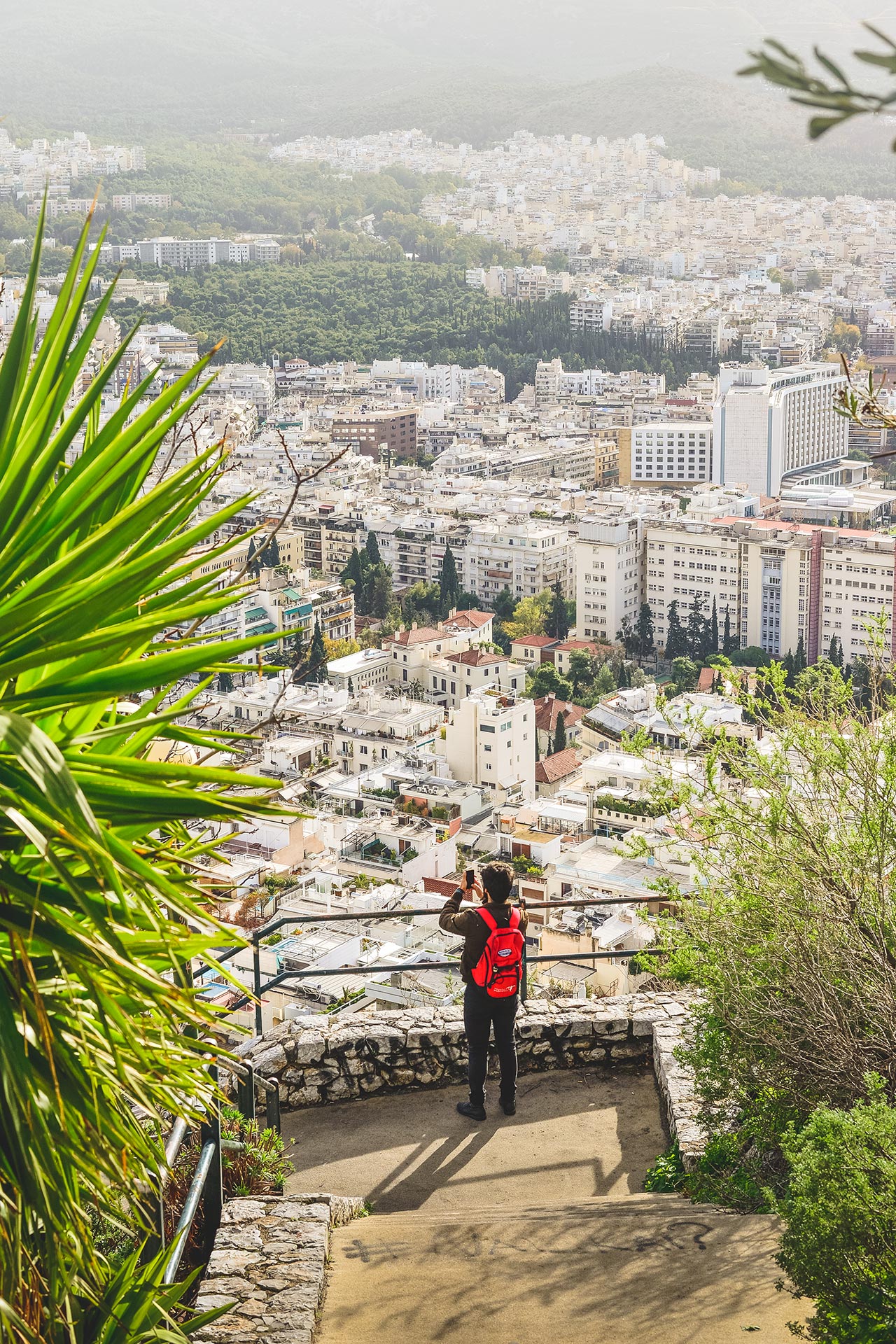 Walk to the summit of Lycabettus Hill 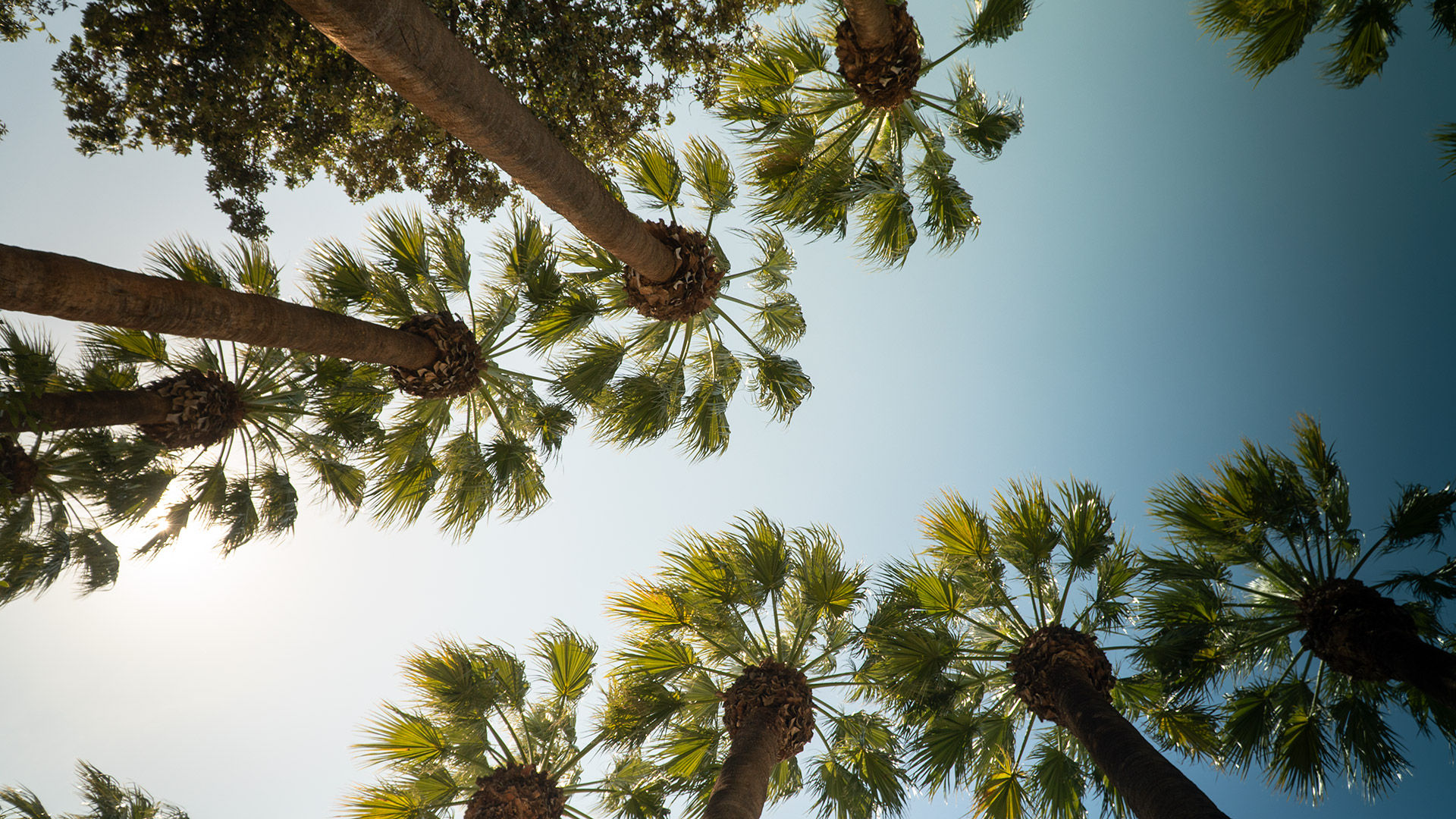 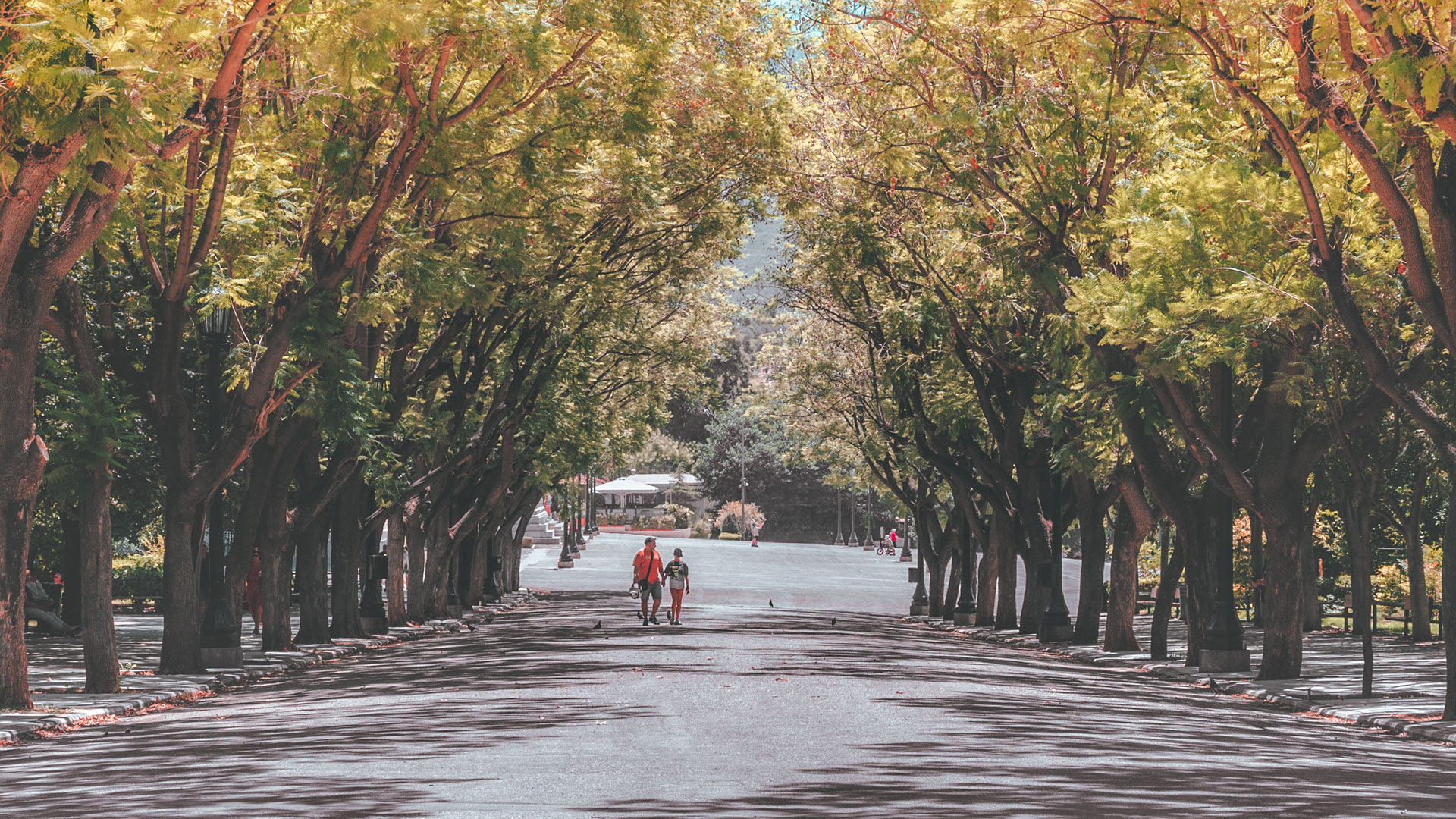 Have a stroll through the gardens of Zappeion Hall

If there’s a jewel the crown when it comes to Athens’ green spaces, this is it. Together with neighbouring Zappeion Park, the National Garden covers a full 160 acres smack bang in the middle of the city. Created in the early 19th century at the request of Queen Amalia (wife of Greece’s first king, Otto), it offers tranquillity and escape right by Syntagma Square and the Parliament. There are more than 500 species of trees and plants from around the world (including 25m tall palm trees planted by Amalia and the magnificent Phytolacca tree from South America), as well as ponds, sculptures and busts of prominent Greeks, a Roman mosaic and a sundial. There is also a playground and traditional cafe, where you can stop for a coffee or a meze lunch. Look out for the impressive Zappeion Hall, built for the first modern Olympics in 1896 and now a space for cultural and political events.

You can’t miss Lycabettus Hill. It’s Athens’ highest spot and a trip to the top is one of the city’s recommended experiences because of the 360-degree view. The most common way to get there is by funicular but, if you’ve got it in you, you should definitely walk to the summit (almost 300m above sea level). It’s easier than you think as the paved path ascends mostly gradually through a pine forest planted in the late 19th century, containing bridges, benches and even an outdoor theatre. It will make the view from the pristine white church of Agios Giorgos at the top even more special. There is also a café-restaurant for you to savour the moment.

The hill opposite the Acropolis is steeped in history. Just a few steps from Dionysios Areopagitou (the pedestrianised street that takes you around the Acropolis), a path leads to the Hill of the Nymphs and Pnyx (which make up Philopappou Hill, named after a Roman consul whose funeral monument you will find at the top along with a 19th-century observatory). Pnyx was the meeting place of democratic legislatures in antiquity and you’ll also find the Prison of Socrates and the Byzantine church of St Dimitrios Loumbardiaris as you wander around. It’s also an oasis for rare tortoises and birds, with pine trees and other Mediterranean flora. From the top, there are great views of the Acropolis and the Athens metropolis.

The Field of Mars (as the name translates) was created in the 1930s to honour the heroes of the 1821 revolution and is the go-to green space for Athenians just north of the city centre.  Within an expanse of around 230 acres, it’s the perfect space to amble or jog amongst plane and olive trees as well as Mediterranean shrubs and other greenery. There are shaded benches as well as a playground, cafe, two small churches and an open-air theatre. But what gives this park its special atmosphere is the collection of busts of revolutionary heroes. A statue of Athena the Defender was added in the 1950s, commemorating soldiers from Britain, Australia and New Zealand who died in Greece.

Smaller in comparison to the other parks, Eleftherias Park is found right next to the Athens Concert Hall (Megaron), making it ideally suited for spending time at before or after a show, or for a walk or picnic if you’re in the area. It’s also the perfect antidote to the busy Vasilissis Sofias Avenue next door. You’ll find cafes and a restaurant within the trees and its centrepiece is the statue of Eleftherios Venizelos, an early 20th-century prime minister and one of Greece’s most prominent statesmen.

Relatively unknown, Alsos Ilision (the Grove of Ilisia) is a 10min walk from Evangelismos metro station and covers an impressive 150 acres. You’ll find an entrance on Iona Dragoumi Street, next to the courtyard of the church of Agios Charalambos Ilisia, from where you begin your stroll between pine and cypress trees and past a playground. It’s also near Rizari Park, a recent addition to Athens’ green spaces, tucked away between two of the city’s busiest thoroughfares – Vasileos Konstantinou and Vasilissis Sofias avenues

You can enjoy the parks and hills of Athens all year round, with each season giving a different colour and mood.

To the National Garden

To the National Garden

Let’s all try to keep the magic of Athens green spaces alive for all the animals and plants that live there and future generations of visitors. 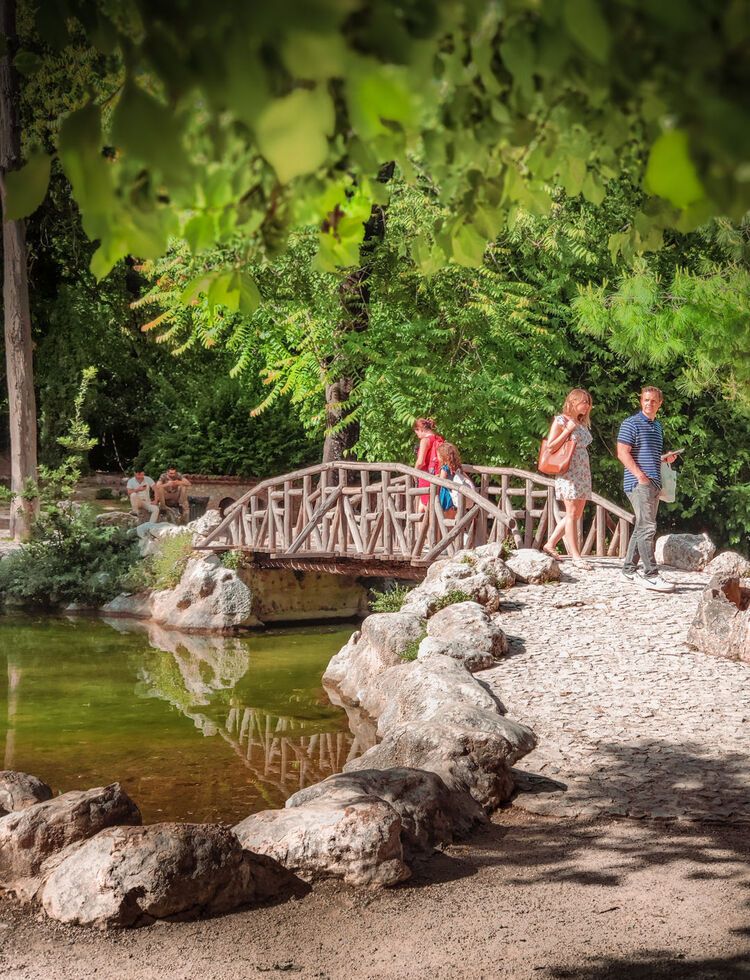 Keep the environment as clean as possible by using the bins provided or, if necessary, keeping your rubbish with you until you find one.
Use a refillable water bottle to try to minimise your use of plastic.
Respect any monuments and cultural treasures.
Respect the flora and fauna and don’t remove plants and flowers.
Respect your fellow visitors and the locals.
Lighting fires in the park is prohibited.
Read More Read Less
DESTINATION