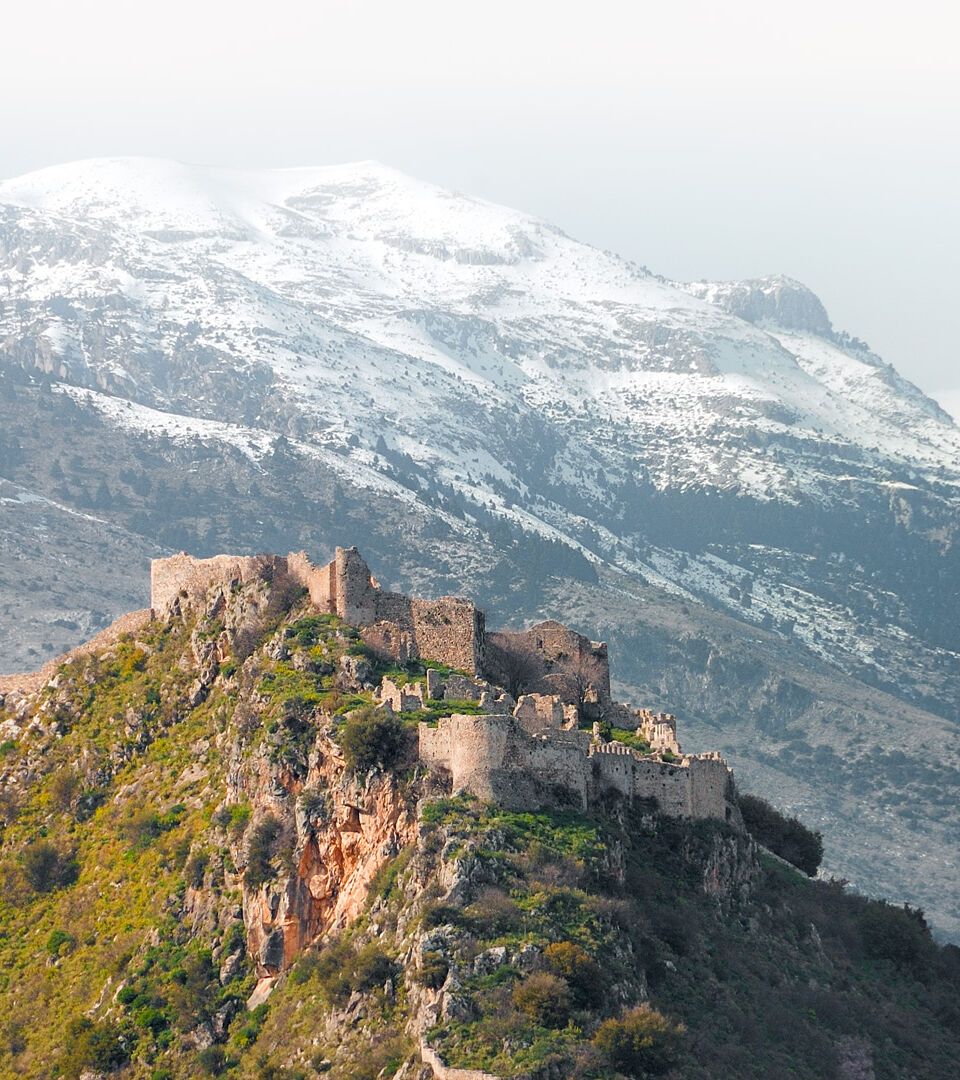 Today
26°
FRI
22°
SAT
23°
SUN
18°
MON
20°
The late Byzantine city of Mystras, the modern city of Sparta and echoes of the ancient city-state – all in the foothills of mighty Mt Taygetos

Fought over for centuries by Franks, Venetians, Byzantines and Ottomans … Capital of the Despotate of the Morea, in the heart of the Peloponnese … A final outpost of the defeated Byzantine emperors … A bridge from antiquity to the Renaissance … Triumphant victories and humiliating defeats, but also the wisdom of philosophers and artists of Ancient Greece … The ruins of the militarist state that gave birth to so many legends of fearless courage, laconic speech and true grit … Mystras and nearby Sparta, in the central Peloponnese, are all of these things .

What to do in Mystra

A journey to Byzantium

As you approach Mystras, on a twisting and turning road, you can see the remains of the Byzantine castle-state from afar, clustered on the steep hillside. Stout walls, church domes, houses, monasteries and palaces stand out in relief against the sloping earth. Once you walk up the cobbled paths, enter the churches and admire their frescoes, you’ll succumb to the charm of this abandoned city. It represents the apex of 14th-15th century Byzantine architecture. In 1989, Unesco added Mystras to its World Cultural Heritage catalogue.

In the palace of the last Byzantine emperors

By the end of your visit, you’ll be familiar with the Cantacuzenos and Palaiologos families, who ruled over the Peloponnese from 1349 to 1460. Their palace lies on the only flat expanse near the top of the hill and is a rare example of civic Byzantine architecture, with additions from different periods. You can distinguish the two wings erected by the Cantacuzenos and Palaiologos despots. Their kingdom was called the Despotate of the Morea. Civilisation flowered here and when the Ottomans conquered it, its luminaries and artists fled to Italy and contributed to the rebirth of ancient Greek culture.

Agia Sophia, in the Upper Town of Mystras, seems to have been the church of the monastery of Zoodotos Christos, which was founded by the first Despot, Manuel Cantacuzenos, in the mid-14th century. Step inside this church and the others on the hillside and look at the frescoes. The Pantanassa, considered the most beautiful, still functions as a nunnery.

Today’s Sparta grew up south of the centre of Ancient Greece. It was laid out from the start by Bavarian architects according to the model of neoclassical town planning that prevailed in mid-19th century Europe. This gives it a pleasant, spacious feeling. As you walk around, note the neoclassical Town Hall of 1907 and the old Palace of Justice in the main square, and the Leonidion monument on Agidos street.

Many believe that the bones of the kings of Sparta and the heroes of Thermopylae still lie buried here. A bust of Leonidas stands at the entrance to the National Stadium, while behind it you’ll visit the park that contains the ancient acropolis and the Roman theatre. Climb up to the acropolis and you’ll see the modern city spread out below you like a chessboard.

Both Pausanias and Thucydides wrote that the Kaiadas chasm was where the Spartans executed criminals, traitors, prisoners and possibly even deformed infants. To see it, go to the village of Trypi (‘hole’) west of Sparta, drink from the springs and then pick your way up the 118 steps to get to the notorious pothole-cave. It’s naturally air-conditioned.

The Museum of the Olive and Greek Oil

Laconia’s newest museum is housed in a handsome, two-storey, stone building of the former electricity company. A museum of this kind could only exist in the Peloponnese. Beautifully designed and informative, this could not be a better introduction to the history and culture of the olive and olive oil production in Greece and uses in cooking, health, art and religion.

Just 15 minutes’ walk from the village of Parori, you’ll come to the cave which opens onto the Langadiotissa Gorge. Right at the end of it, built into the limestone, is the little church, which has paintings from 1920. It’s an authentic attraction and deeply devout.

The 10 most important architectural monuments in Greece

Medieval cities and traditional villages, white houses bleached by the sun and formidable castles… a tour of Mediterranean architecture and history in a nutshell.