Village-hopping in Samos, from mountain to coast

One of Greece’s most culturally rich and green islands is also home to a wealth of villages. Whether you explore the coast or wine-growing foothills, prepare for an experience overflowing with authenticity. 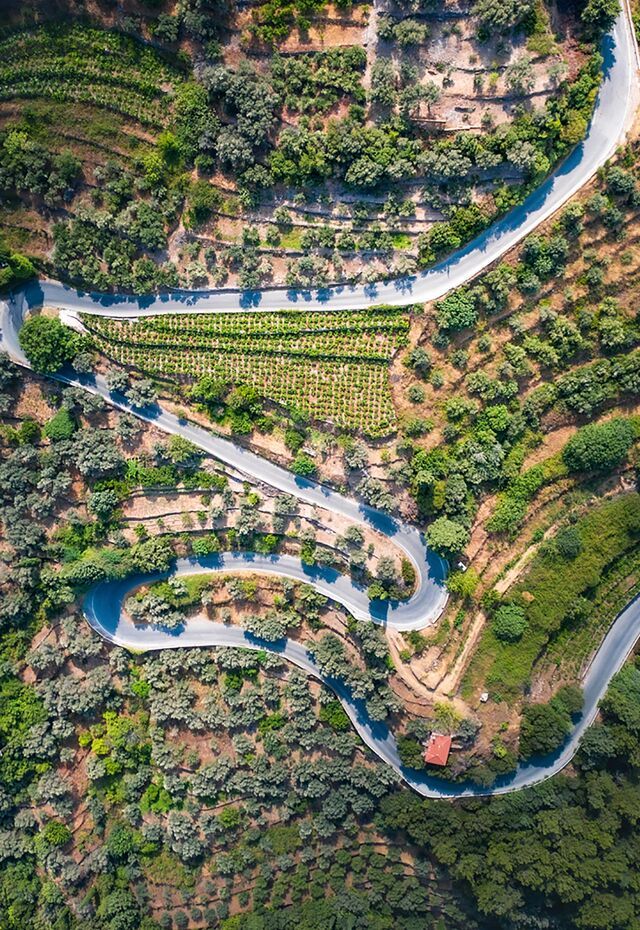 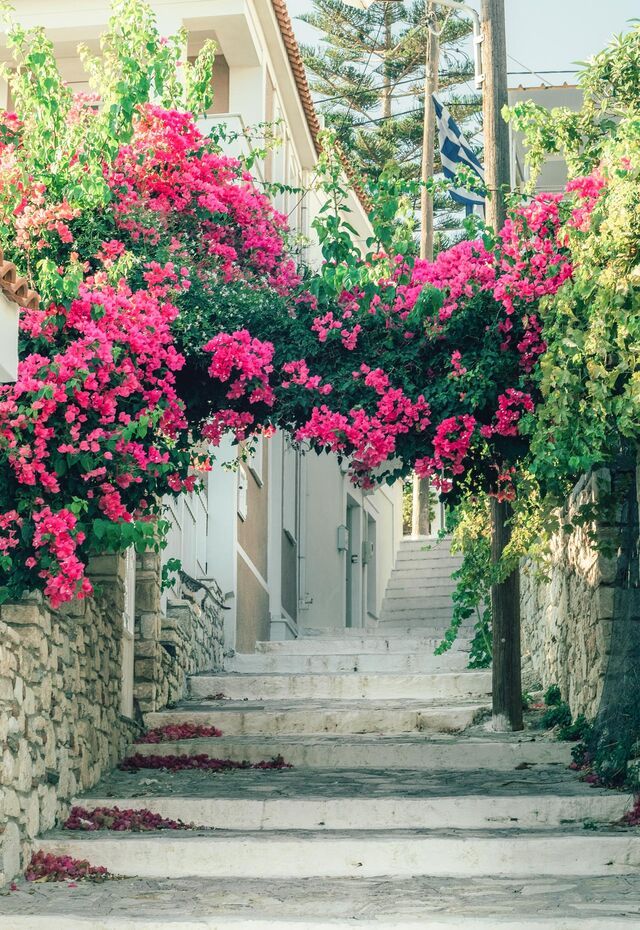 View on map
Duration
1 - 3 days
Season
All year round

Attracted by countless beaches and seduced by the colour of the pine forests, visitors to Samos can’t help falling in love with the island known as the birthplace of Hera, the wife of Zeus. But if you want a lasting relationship, where you can say you’ve looked into Samos’ soul, there’s only one thing for it: head to the villages.

There are villages throughout Samos that capture all the authenticity of this famous North Aegean isle. Cosmopolitan by the coast and tranquil in the hills, the feeling is never short of captivating – sleepy little fishing ports and village squares, local architecture and traditions, vineyards that produce the grapes for Samos’ world-famous dessert wine, and even beaches for a cheeky swim.

And with so much greenery surrounding you, you’ll want to explore the hiking paths from the villages, taking you past monuments and waterfalls. Or you could just find yourself a taverna and lose your heart to Samos that way. 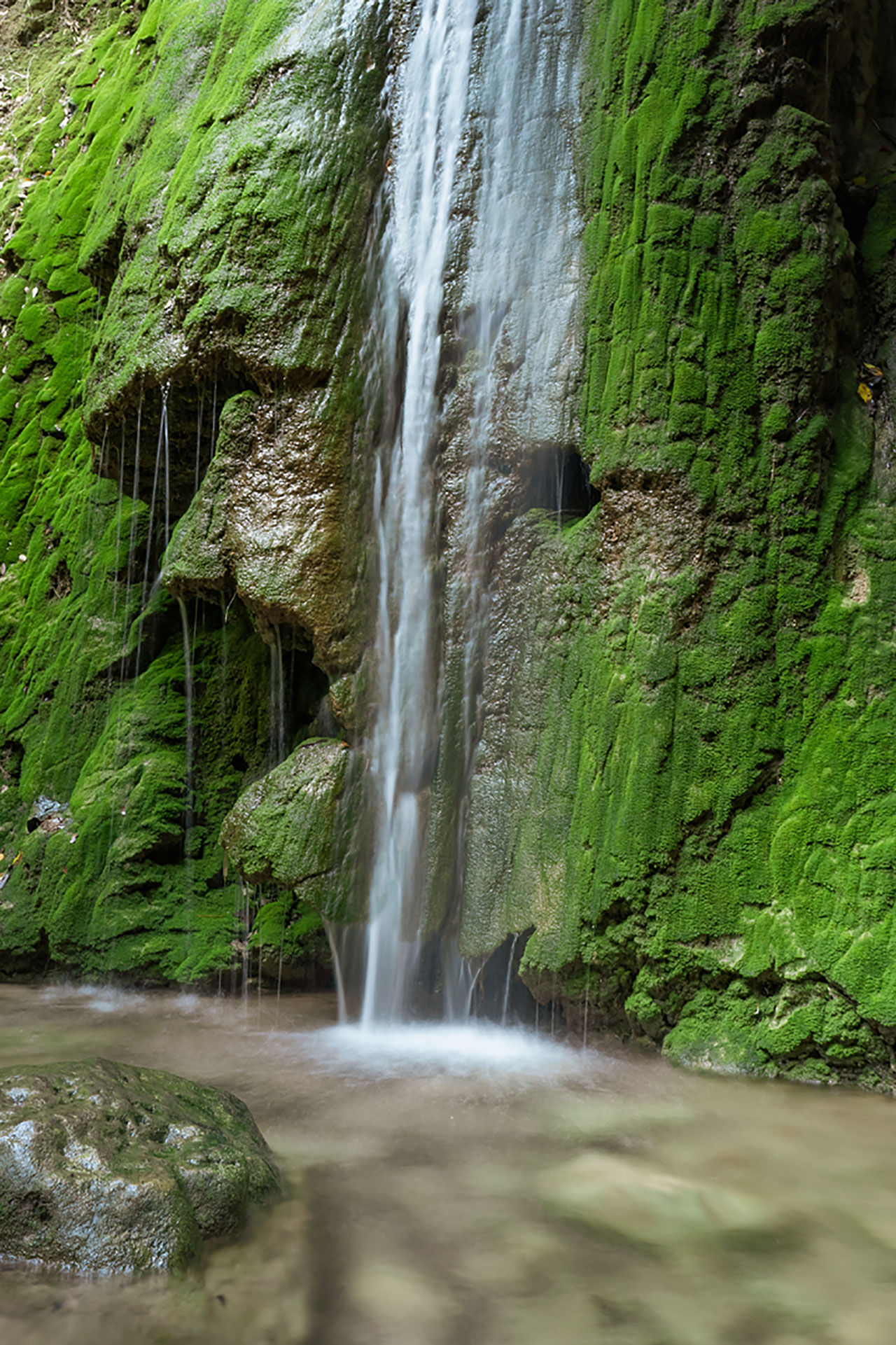 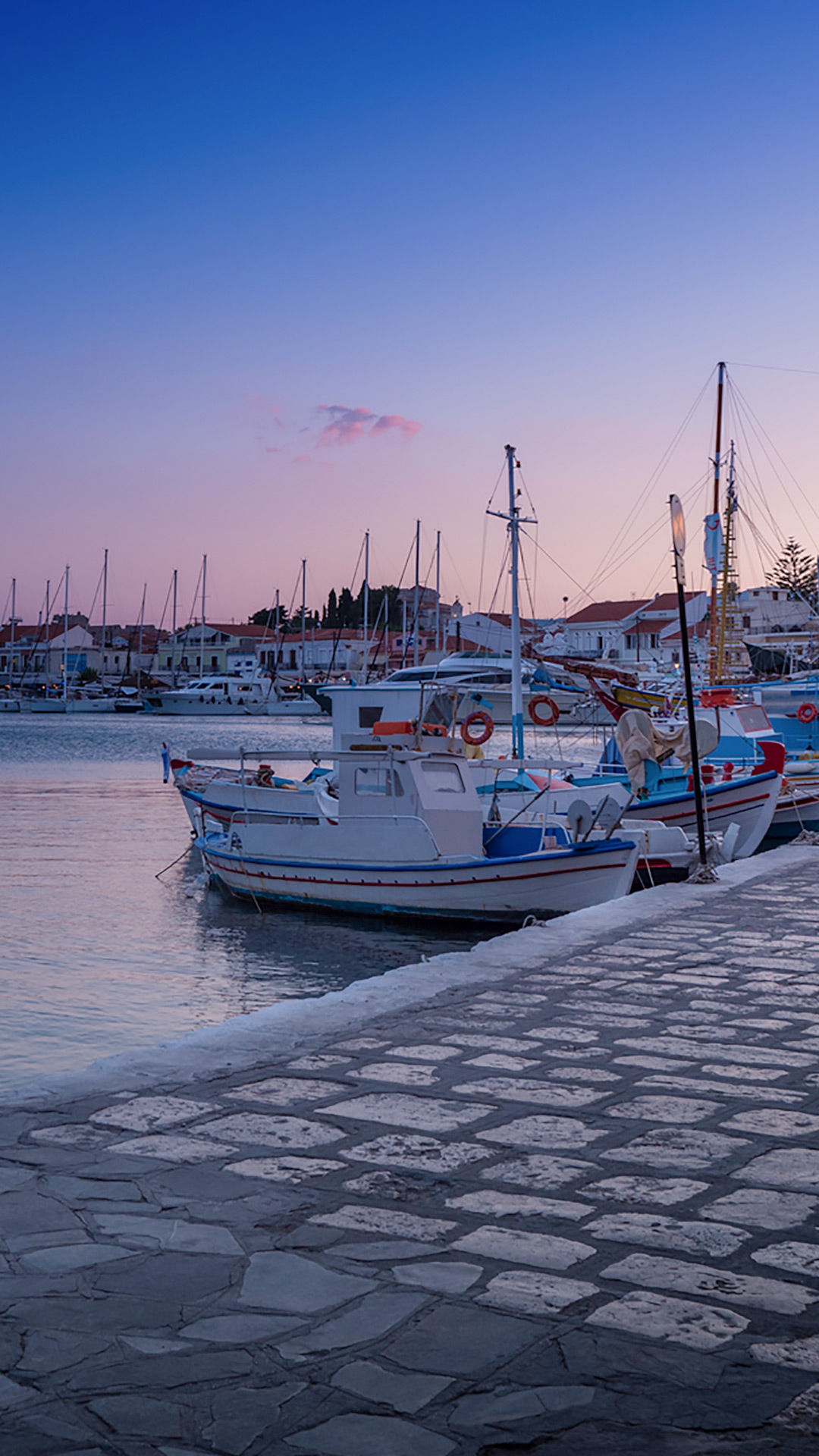 View of fishing boats in Pythagoreio 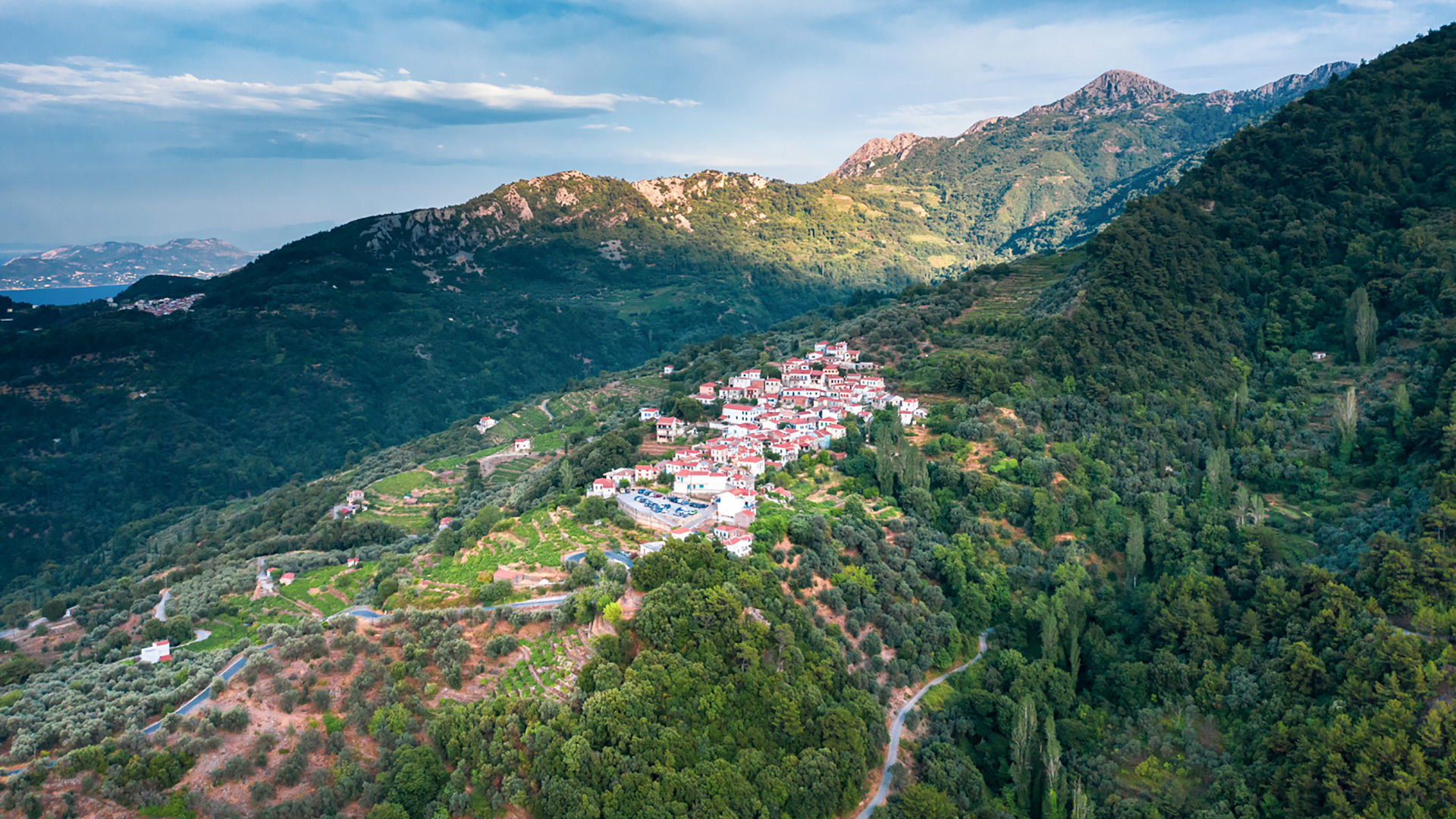 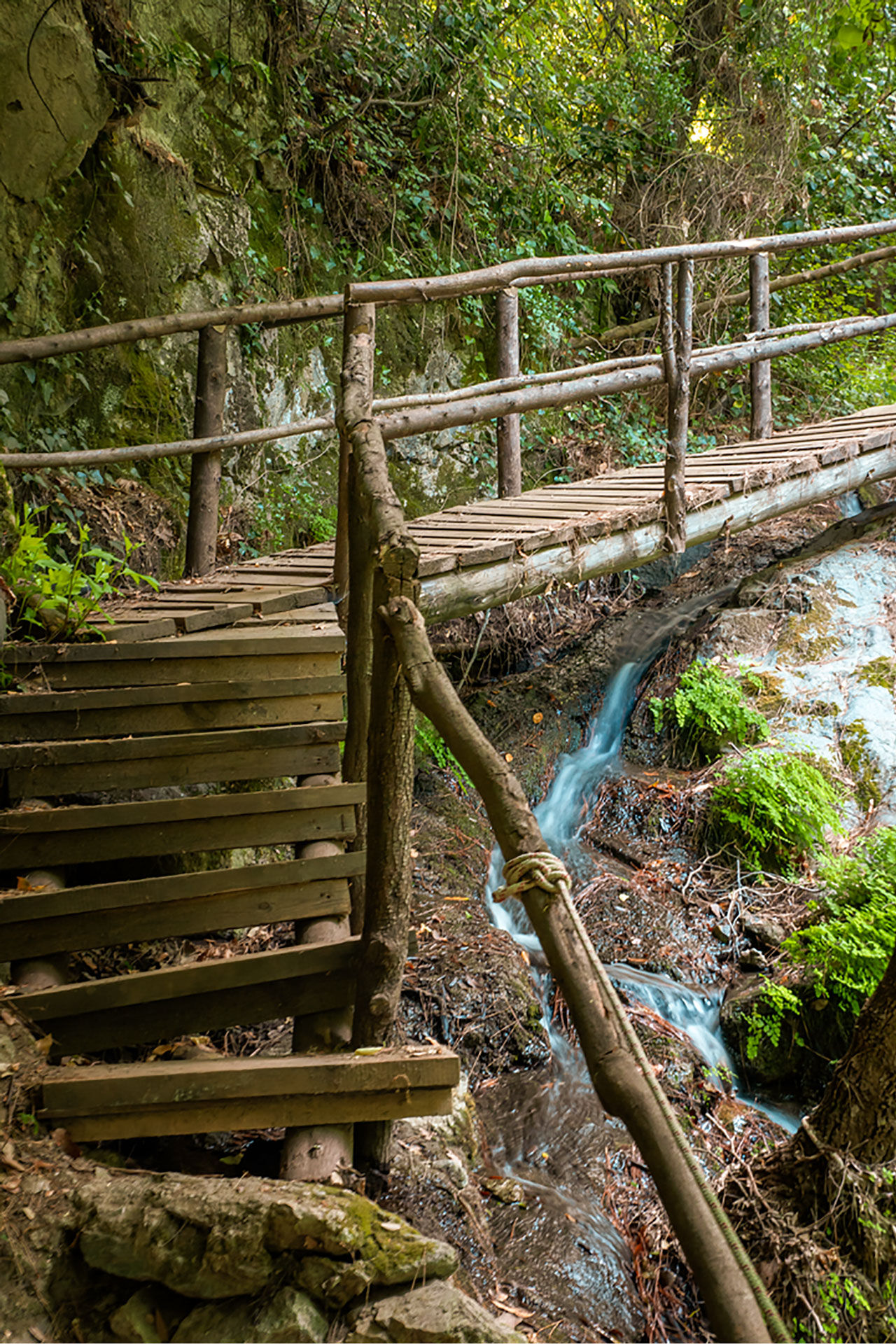 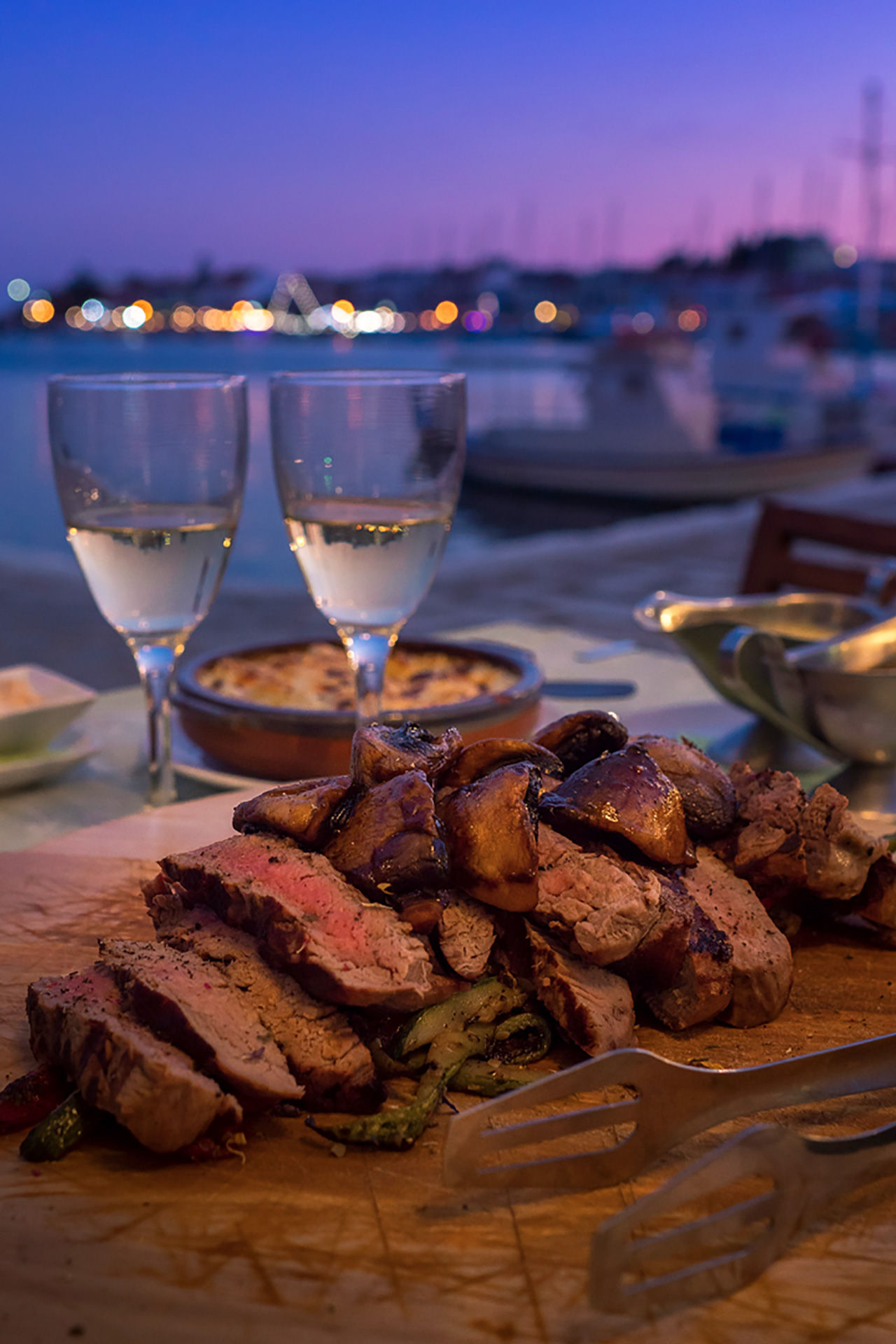 Enjoy a dinner by the sea in Pythagoreio 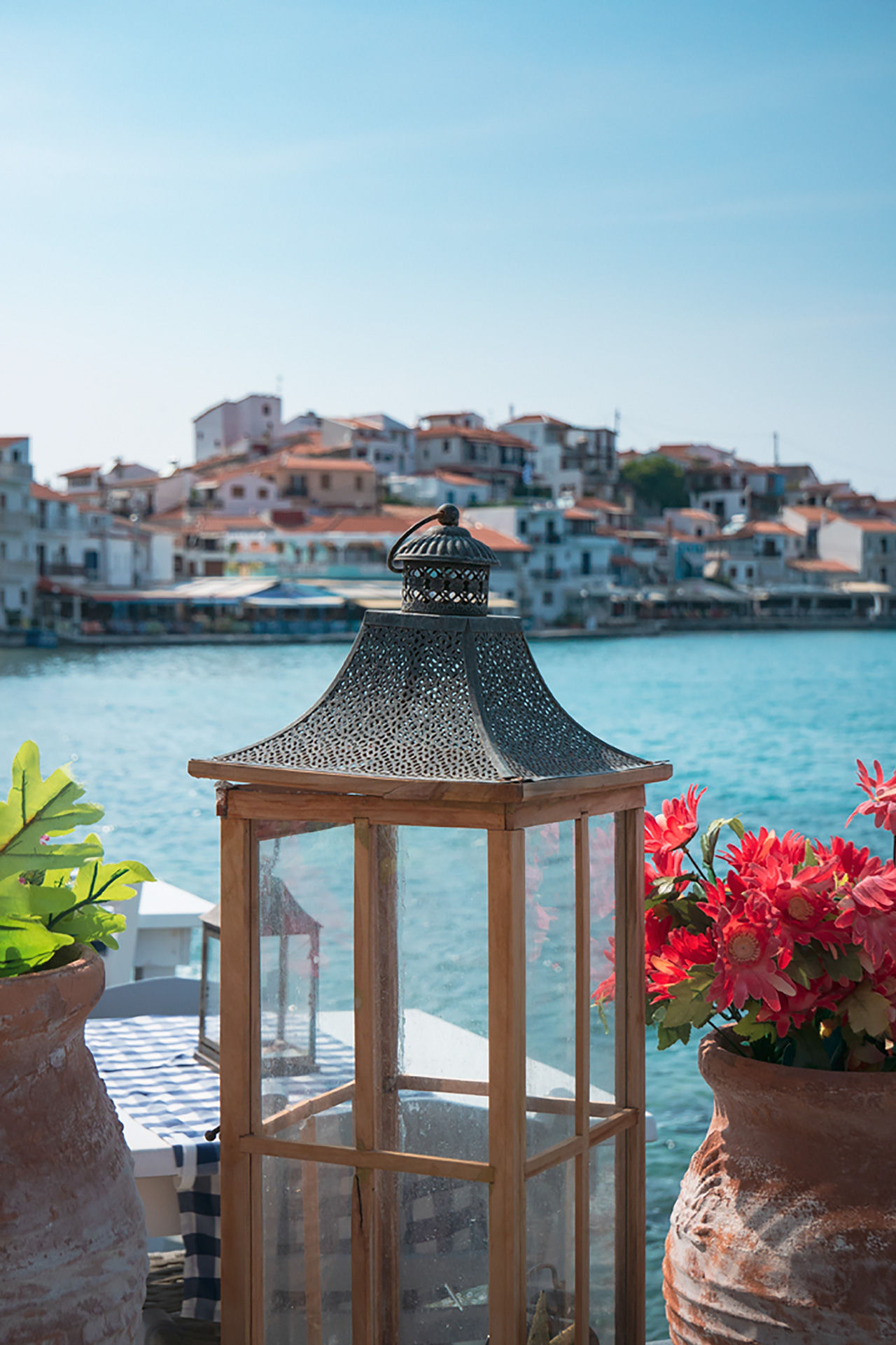 Kokkari village is colourful, quaint, cute and one of Samos’ hidden gems 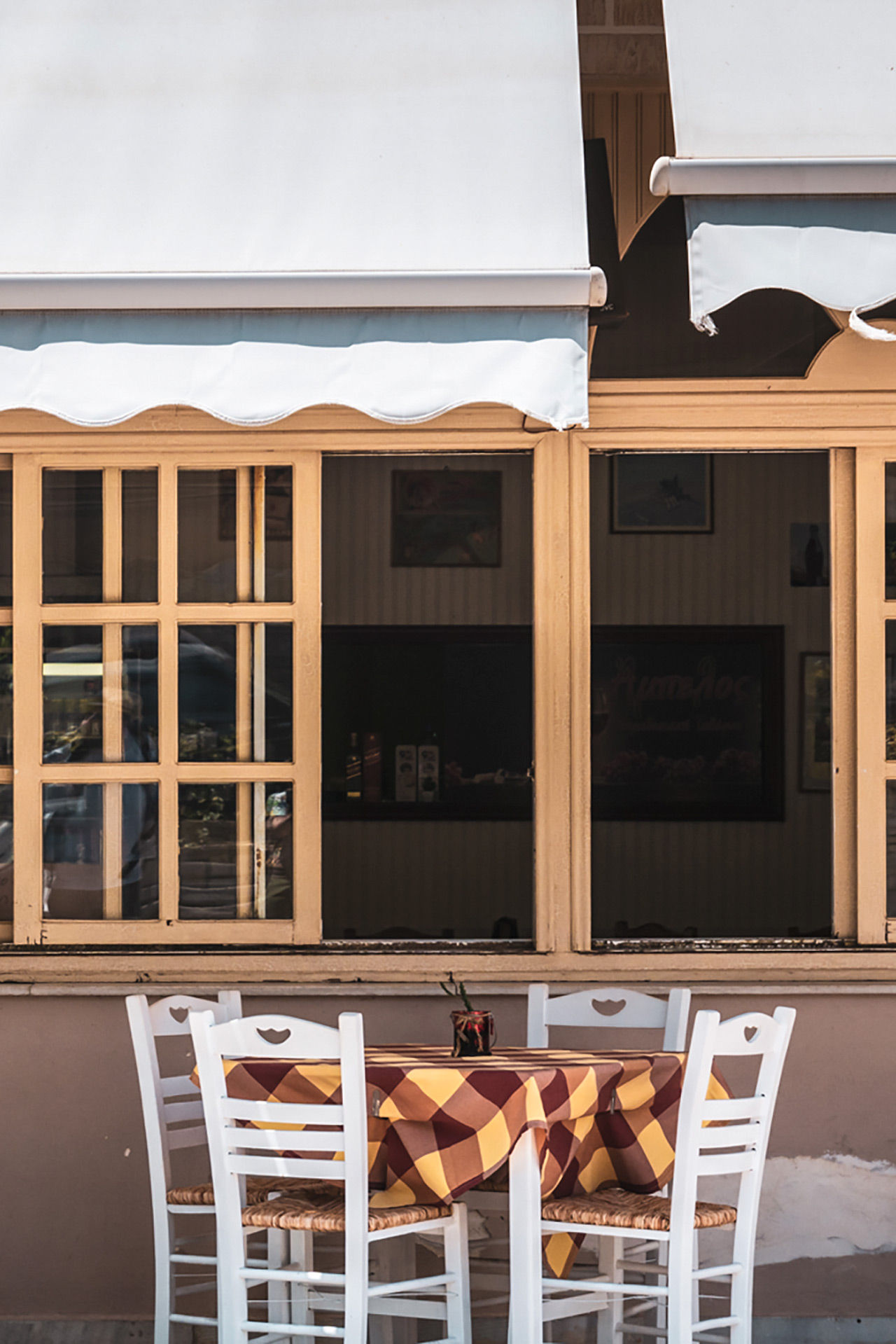 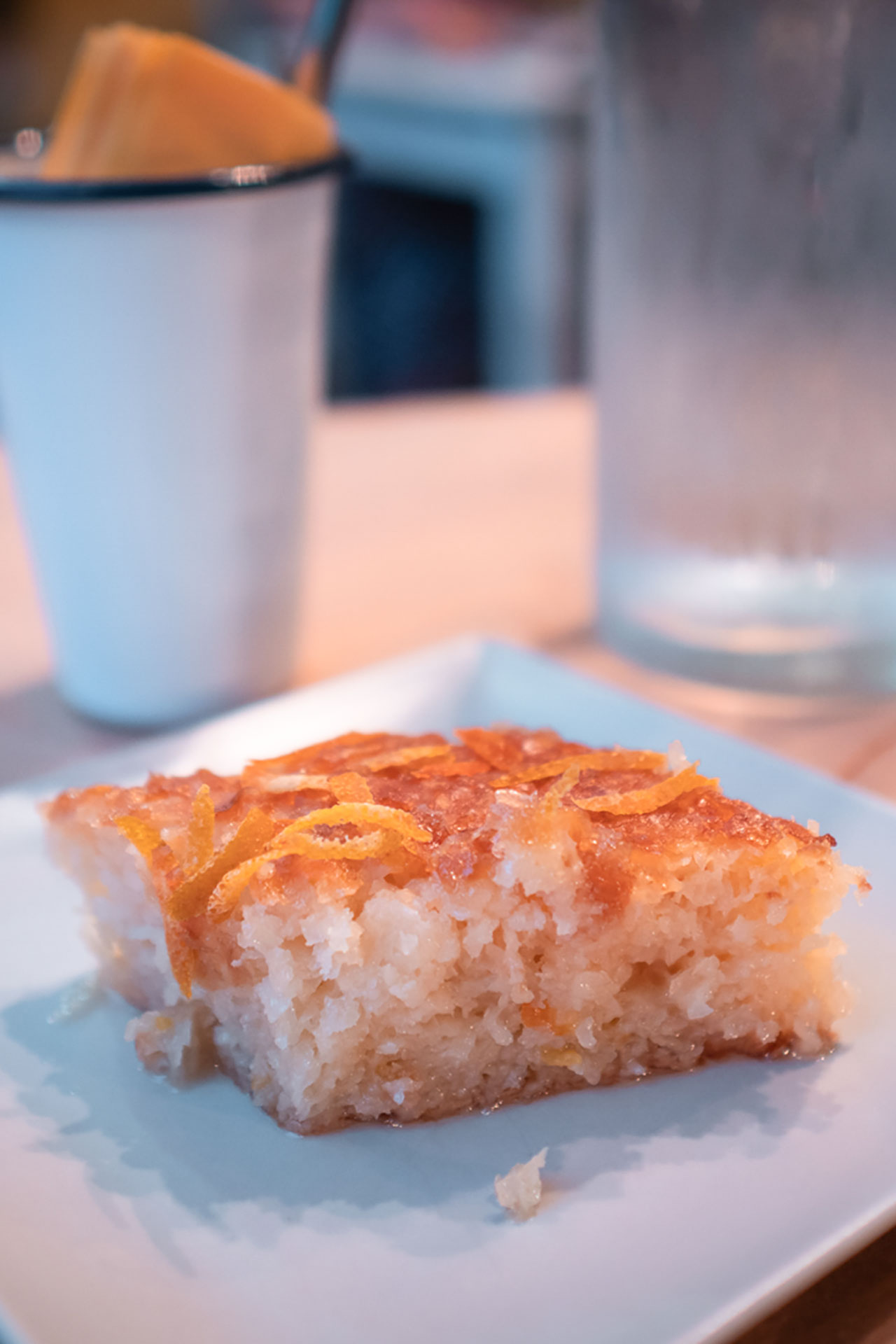 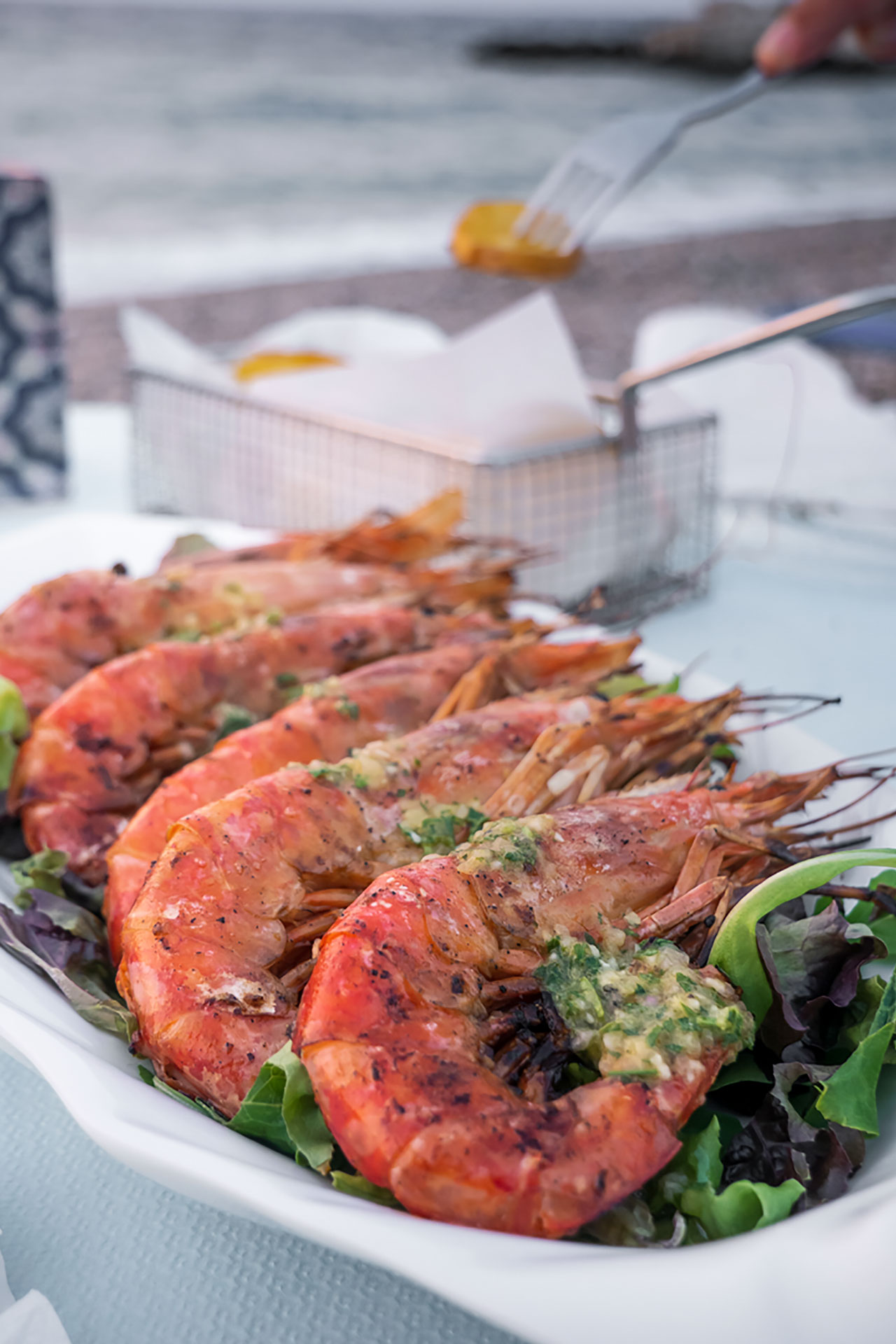 Seafood by the beach in Kokkari 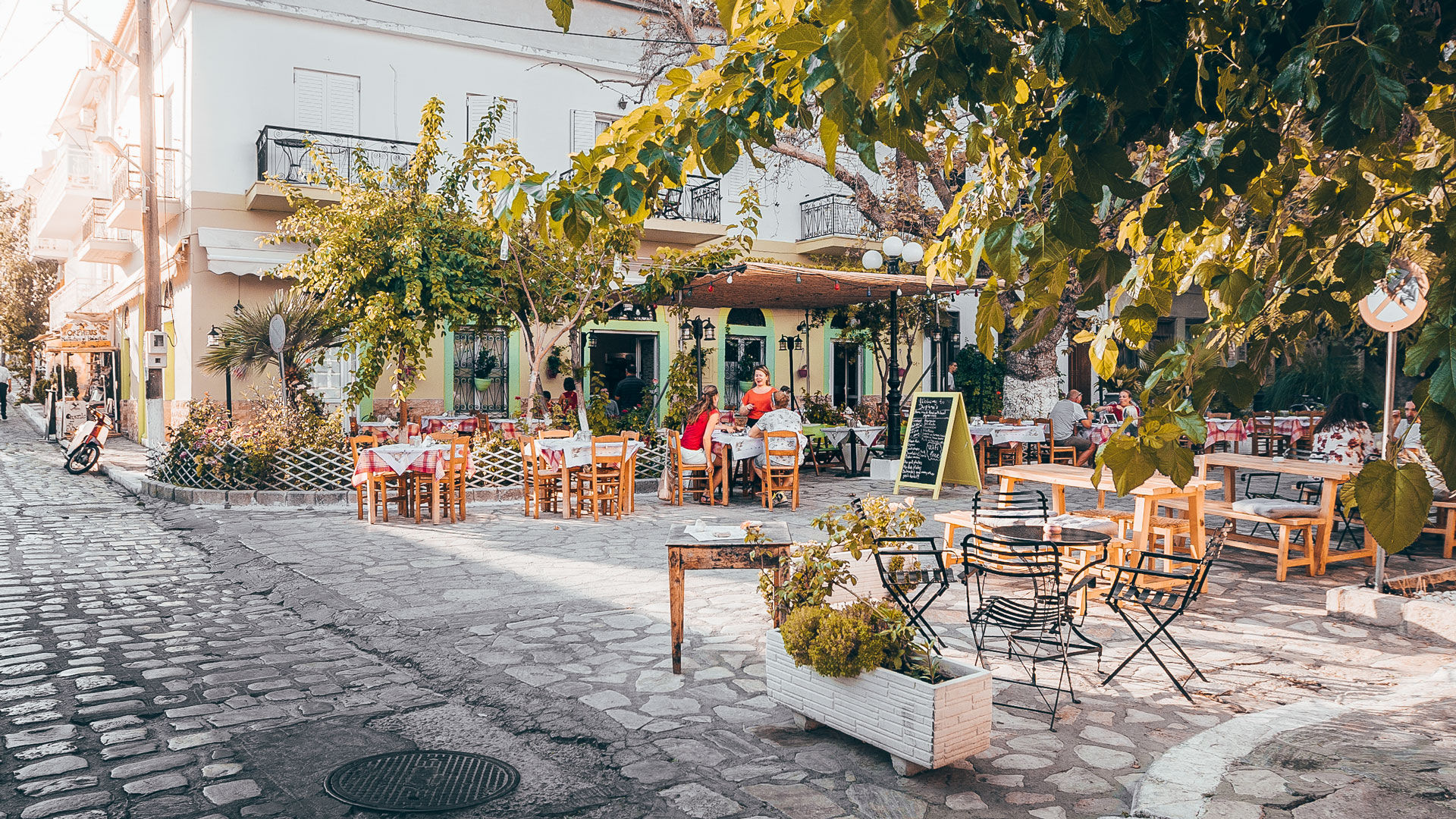 View of traditional tavern in Pythagoreio 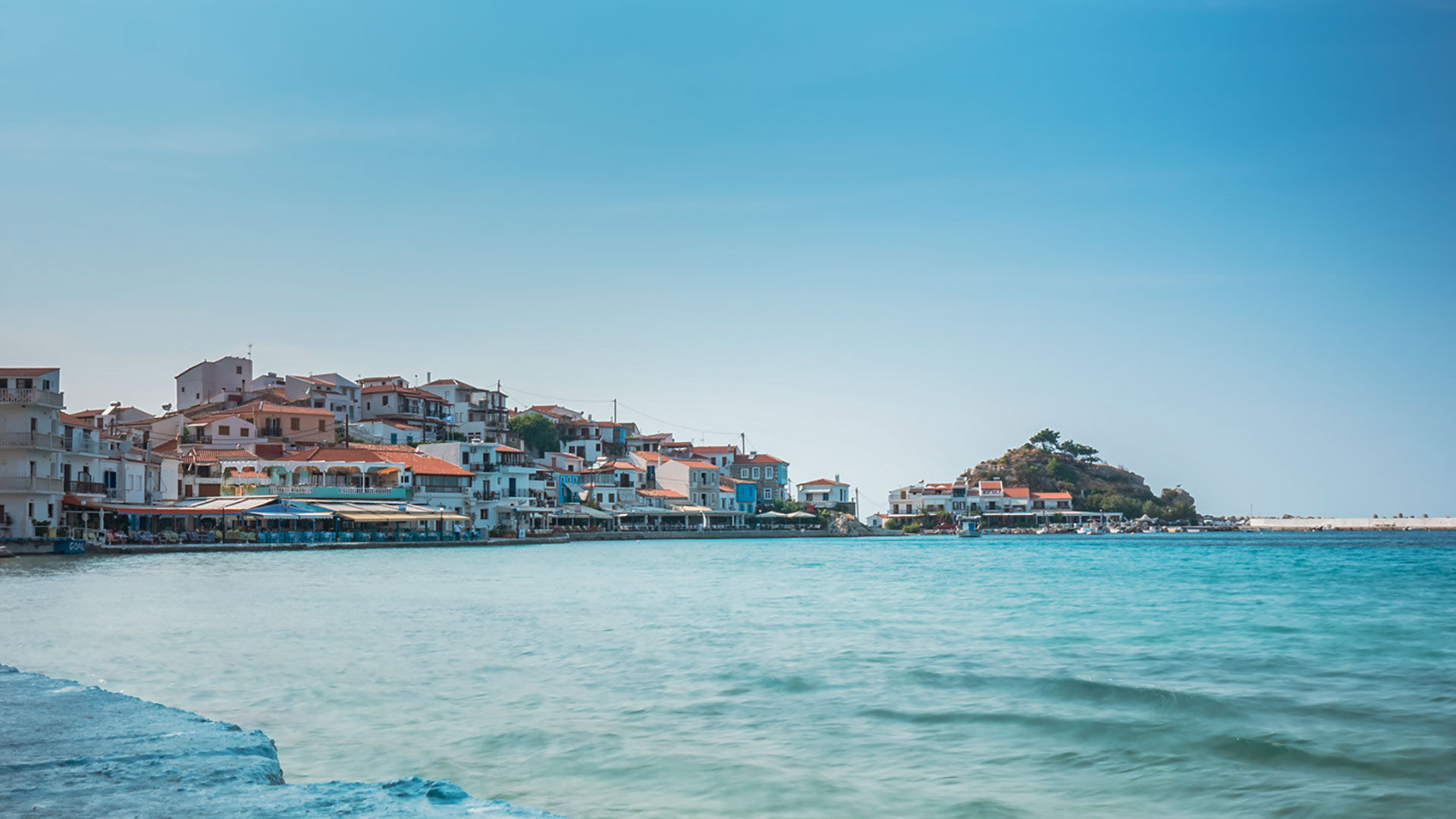 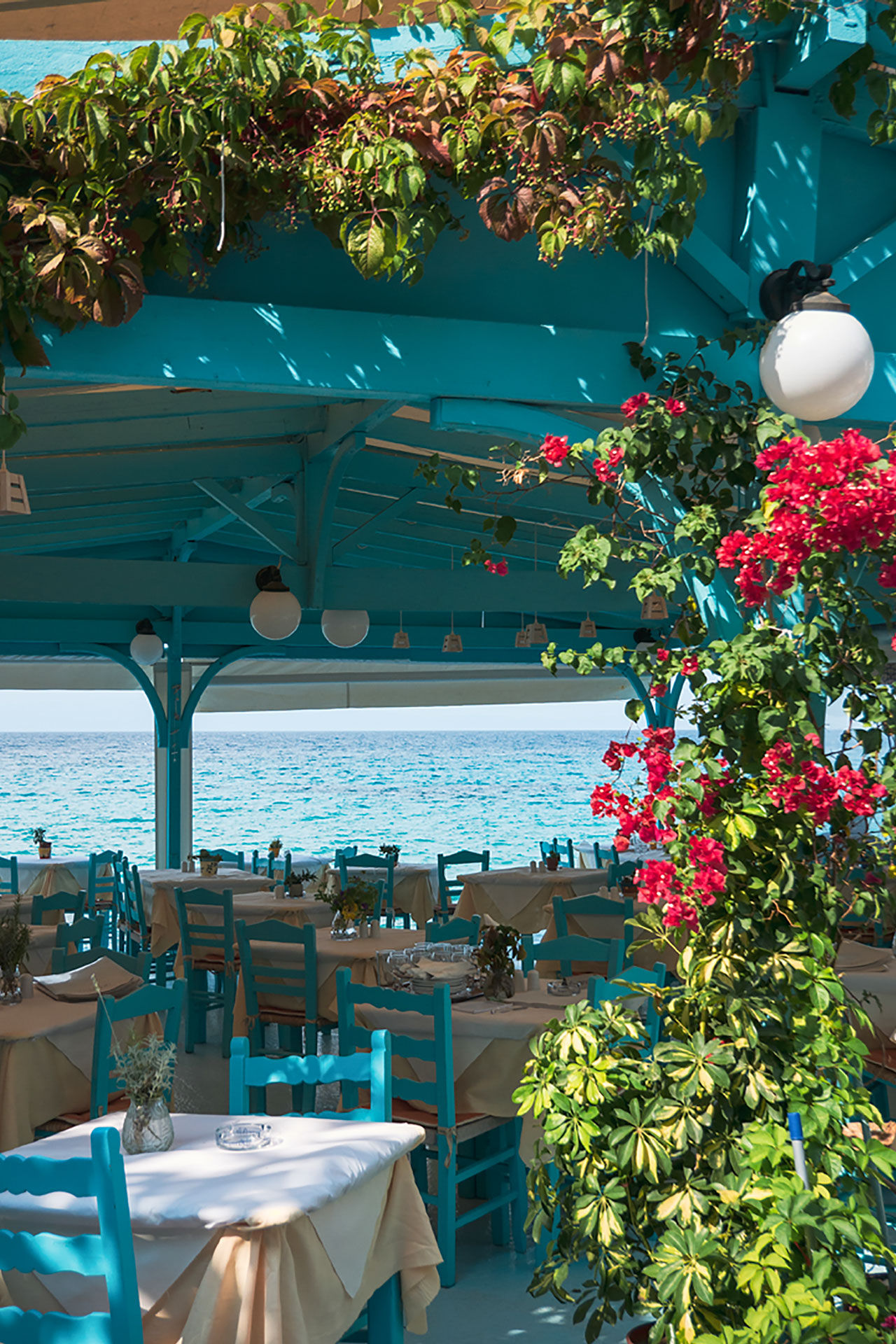 There are around 30 villages to choose from, but we’ve chosen two routes – one coastal and one in the hills that capture everything wonderful about Samos.

From Vathi, the port and main town of Samos, head along the coastal road to Kokkari. Colourful, quaint, cute… and one of Samos’ hidden gems. The cafes and brightly painted fishing boats in the little harbour are the finishing touches to this picture-perfect village. Have breakfast here, sampling the local products, and then wander around streets lined with picturesque houses. There are footpaths into the surrounding greenery. And before you move on, have a quick swim from the Mikra Lemonakia beach right by the village.

Perhaps bigger than a village but also more intimate than a town, Pythagorio is Samos’ most important settlement. The birthplace of Pythagoras, it was the island’s original 5th-century BC settlement and is, in its entirety, a UNESCO World Heritage Site. Take your time to wander around the harbour and paved alleyways. And don’t leave without visiting at least some of the cultural sites here or nearby: the ancient Polycratian Walls and Logothetis Tower, the Archaeological Museum and the astonishing Tunnel of Eupalinos (the landmark underground 6th-century BC aqueduct) and Heraion archaeological site, with its temple to the goddess Hera – jointly a UNESCO World Heritage Site.

A change of mood for the final stop: The little fishing village of Posidonio, on the southeast coast, is about pure tranquillity. This is the perfect spot for a seaside taverna and a long glass of ouzo, or perhaps an afternoon swim at the secluded, sandy beach. In the evening, take a walk to the little church of Agios Nikolaos, where there are panoramic views of the village and the sunsets are magical.

Taking its name from the Greek for vine, Ambelos is your introduction to wine-growing Samos. It is around 300m up Mt Karvouni (one of Samos’ two mountains) and is full of picturesque streets and well-maintained houses, typical of Samian architecture. You’ll be tempted by the tavernas, some with great views of the Aegean, with classic Greek dishes made unforgettable by local flavours. And, of course, a glass or two of local wine. There’s a hiking trail from the parking lot through pine trees and olive groves to impressive waterfalls and caves just half an hour away.

Staying in the foothills of Mt Karvouni is another village overlooking the Aegean, surrounded by vineyards and greenery. With old stone houses, cobblestone streets, atmospheric tavernas, Manolates is another example of traditional Samos. The highlights are the pottery and loom weaving workshops where you can witness the traditional crafts being made, although most villagers are involved in vine-growing. It is car-free and from here there are numerous well-signposted hiking trails into the Aidonia Valley.

A 16th-century village surrounded by tall pine trees, olive groves and vineyards. From 360m up, the sea views are spectacular – as are the vineyards growing the muscat grape and the many nearby streams. You should seek out the spring of Pnaka and the monastery of Panagia Vrontas, a short distance away, believed to be the oldest on Samos. The restored houses and local products will stay in your memory, as will the wine. The figs, citrus and cherries, are excellent when in season.

A little further south is semi-mountainous Mytilinei (or Mytilinii), built amphitheatrically within a valley. It is one of the largest and most atmospheric villages of Samos, with cafes, shops and tavernas around a main square. There is a very good Natural History Museum of the Aegean but where Mytilinei stands out is for its six churches and handful of other chapels. There’s a bonus in the summer of an outdoor cinema.

Heading west, into the foothills of Mt Kerkis is Marathokampos, the village that carries the name of the bay known for its many beaches. Another hillside village with paved streets, stone houses, springs and churches, Marathokampos appears to have stood still in time. Near the village are the caves of Sarantaskaliotissa (named after the 40 steps leading to the cave in which there is a church) and Pythagoras (where the great mathematician is said to have fled to escape the tyrant Polycrates).

There are bus routes connecting the villages with Vathi and Karlovasi, but this way you will only be able to visit one village per day.

It’s worth spending one day visiting the coastal villages and 1-2 days exploring the mountain villages, ideally including a separate day in Marathokampos to include some beach time. 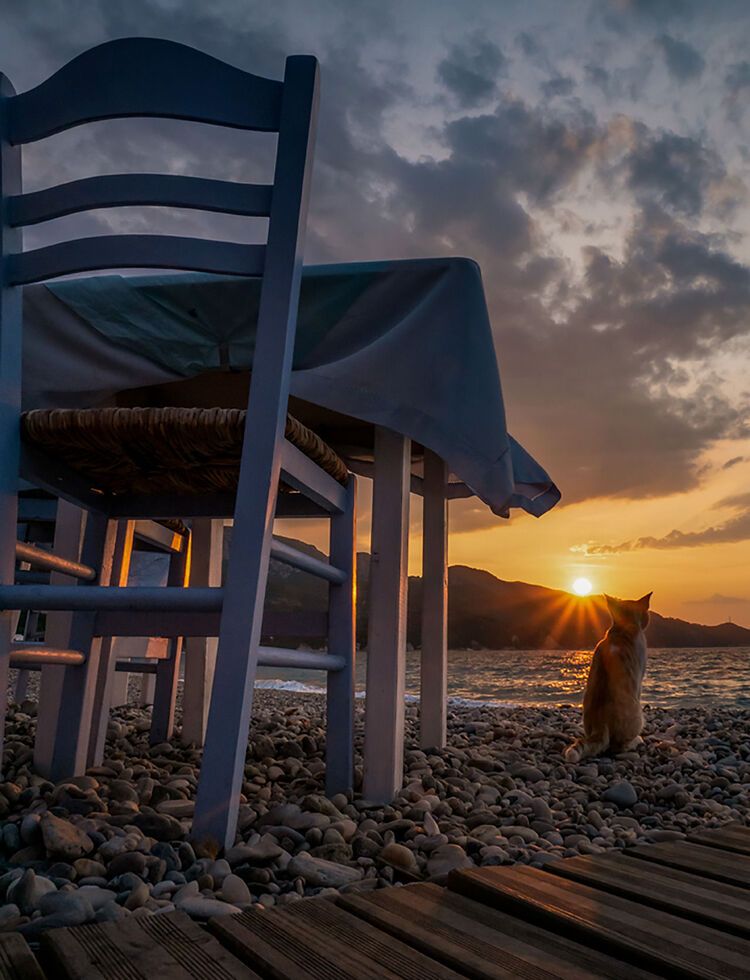 A treasure trove of beaches, greenery and sacred geometry
Discover It 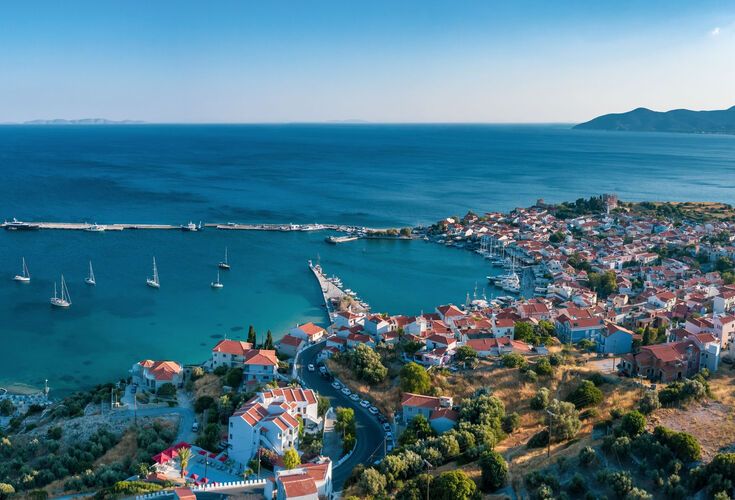