All the history and charm of Crete are contained in Chania’s Old Town, with multicultural influences (Venetian, Ottoman, Jewish and more) on display alongside traditional tavernas and modern restaurants and a choice of waterfront cafes and bars. 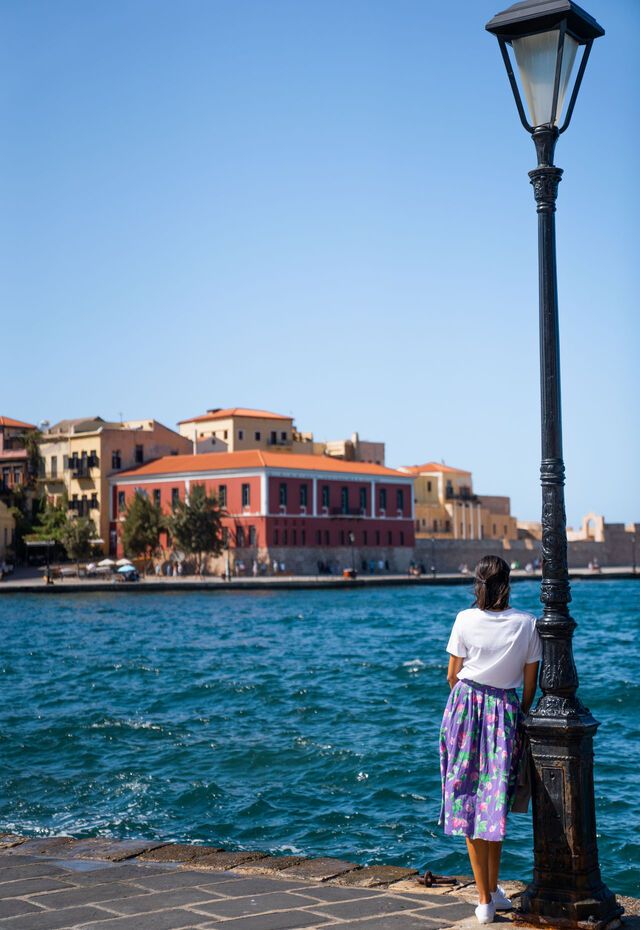 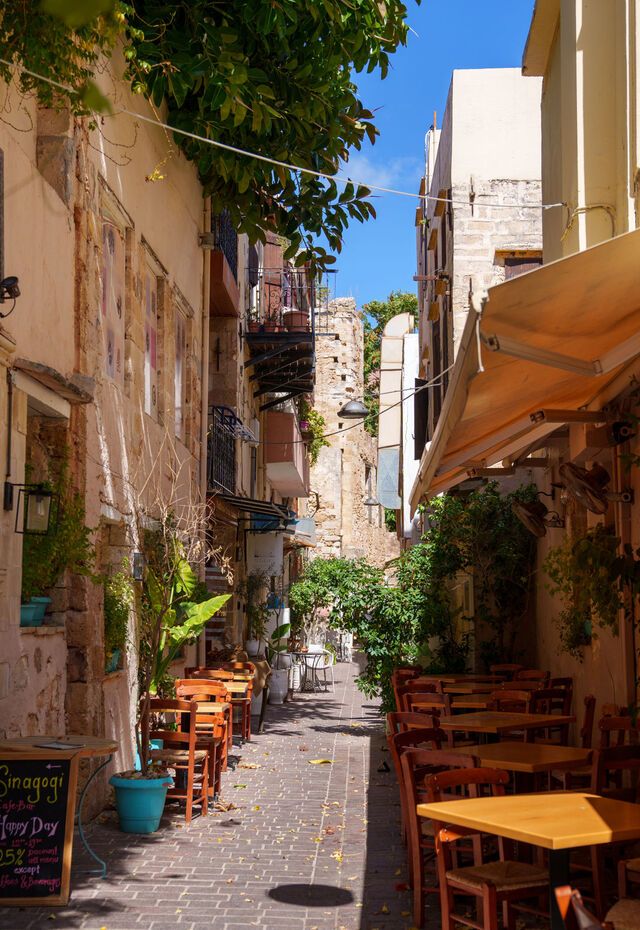 You’ve probably already seen photos of Chania Old Town, with its cobbled streets, Venetian port and famous lighthouse – a setting made all the richer once you’ve learned about the legacy of the Arabs, Venetians and Ottomans who once occupied Crete. So while you’ll undoubtedly enjoy the enchanting beaches, outstanding cuisine and much-vaunted hospitality of the locals in one of the most popular destinations in Greece, it’s worth dedicating part of your holidays in Crete to exploring the Old Town of Chania.

Our walking tour of Chania Old Town introduces you to the architectural, culinary and cultural legacy of the capital of Crete’s easternmost region. Exploring the narrow alleyways, you’ll discover the Jewish and Muslim districts and pass by some of the best tavernas and trendiest bars in Chania town, as well as souvenir shops and museums. So make sure you’re wearing a comfortable pair of shoes and put all of Chania’s world-famous beaches on hold (they’ll still be there when you’re done) and join us as we introduce you to the best of Chania Old Town. 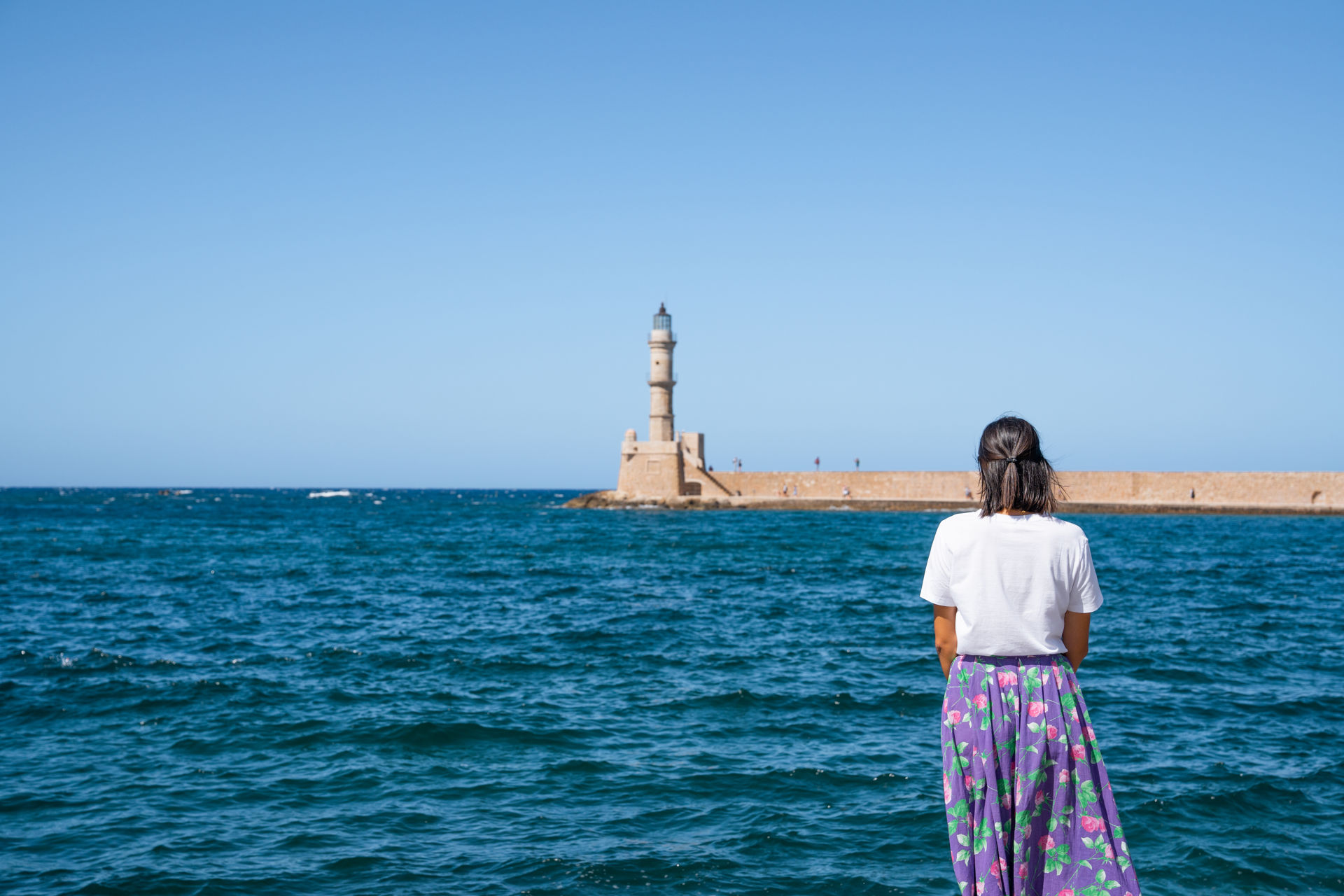 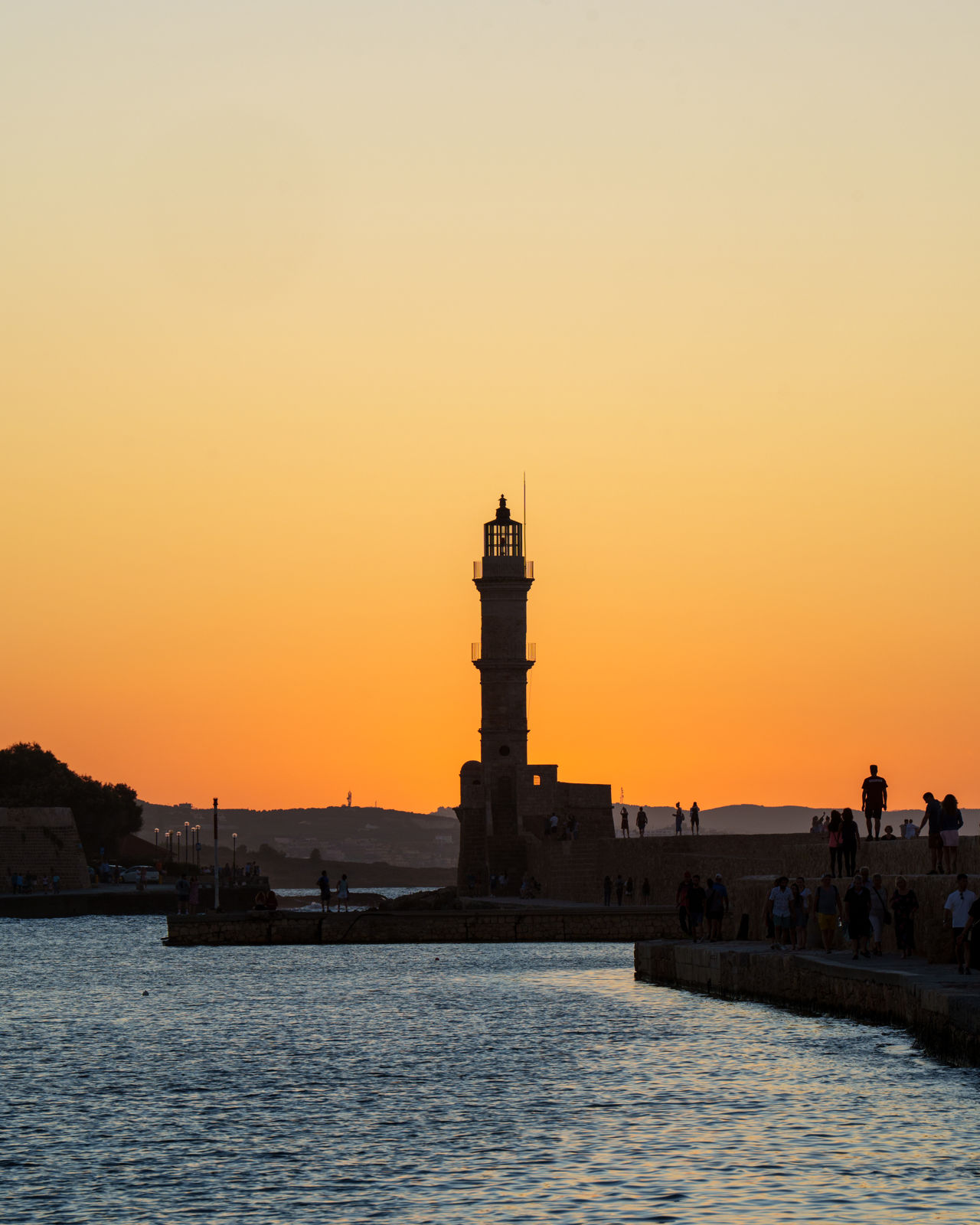 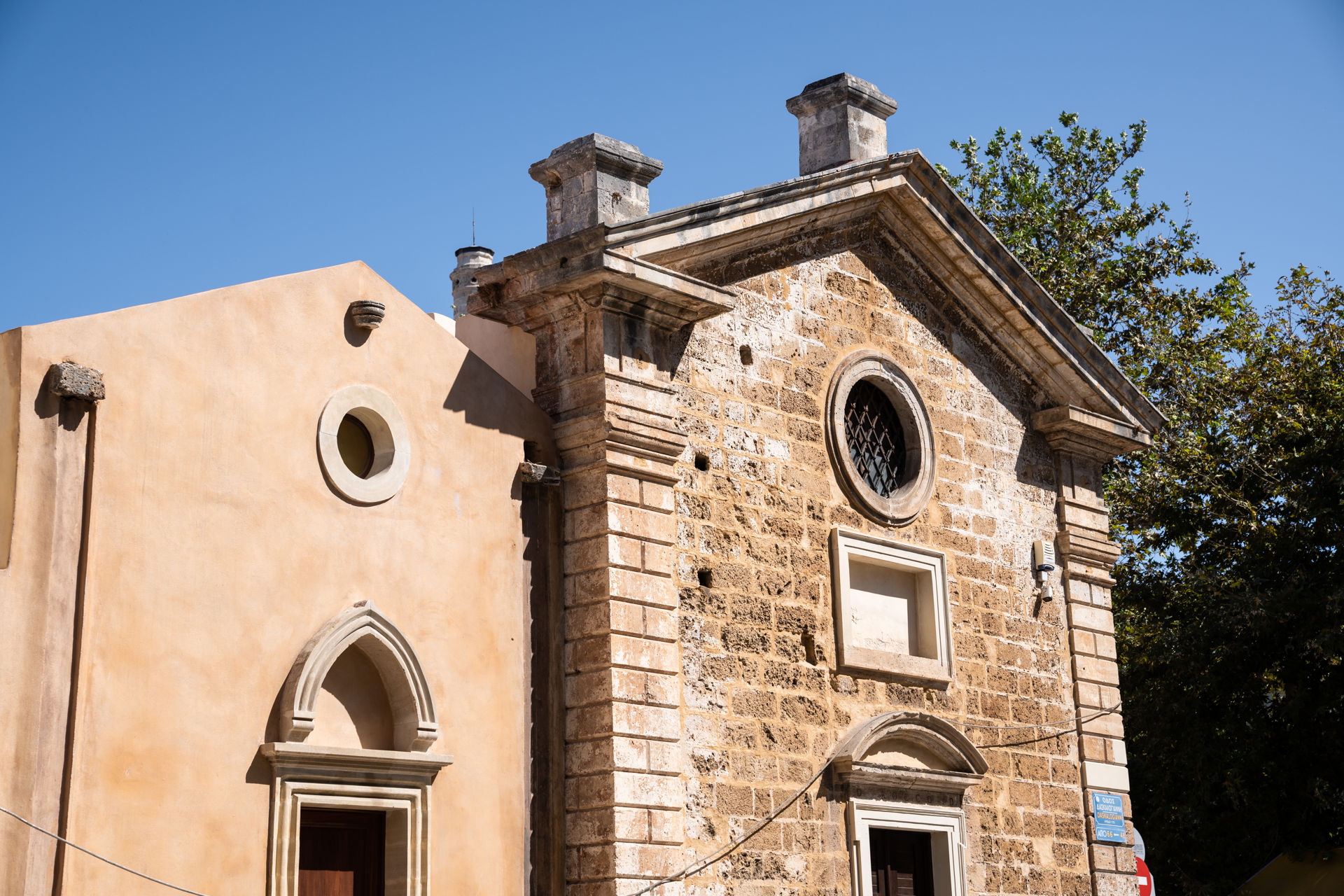 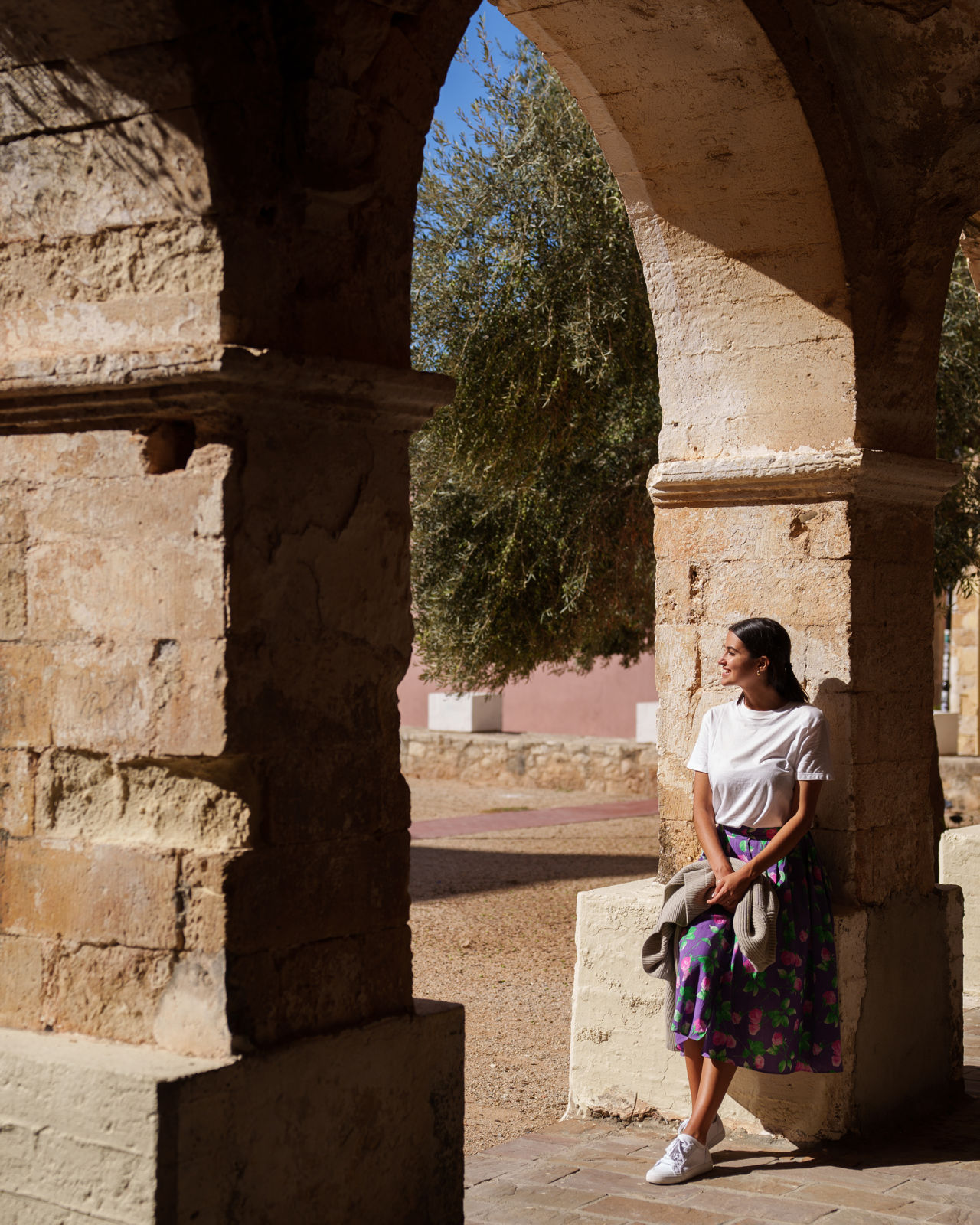 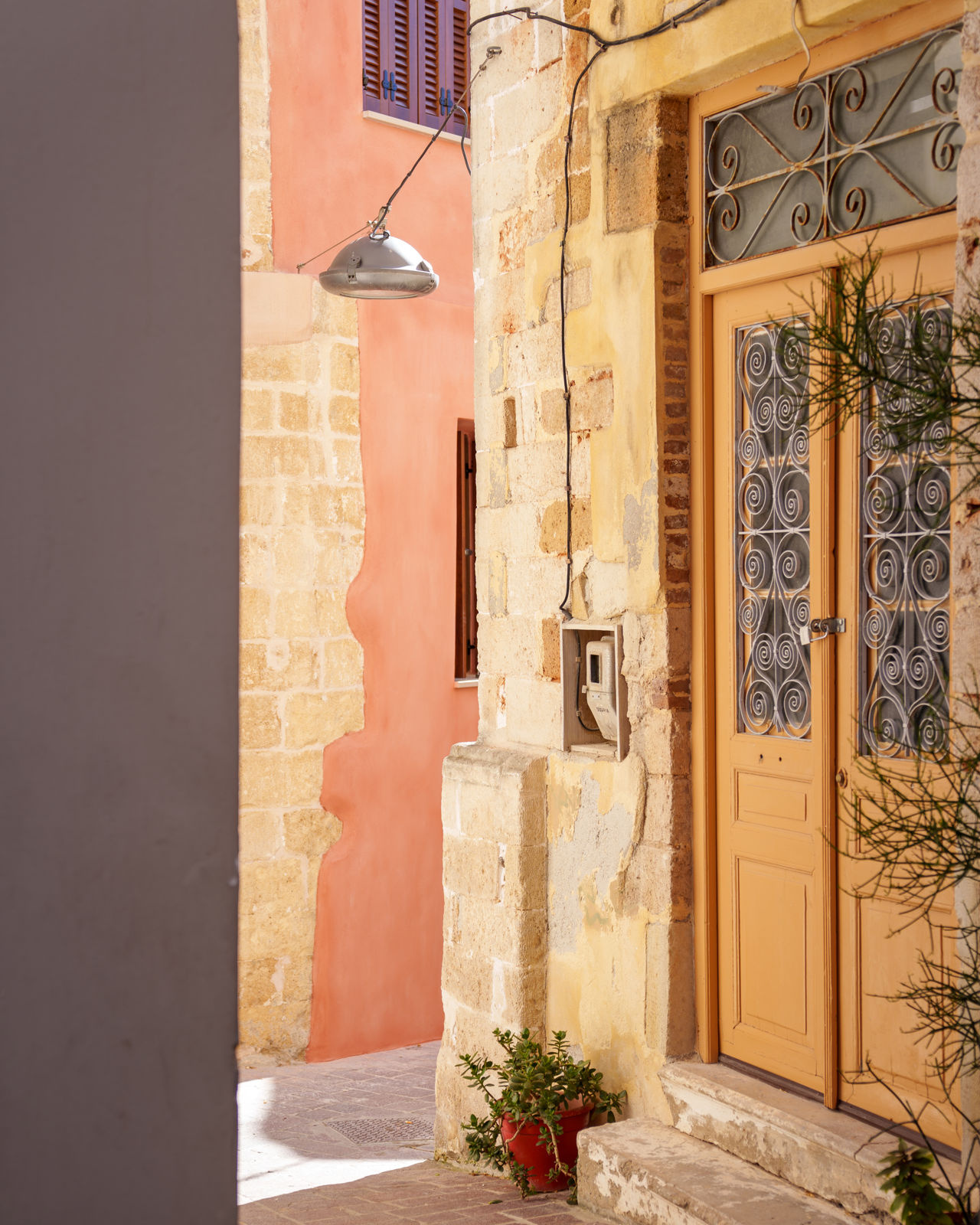 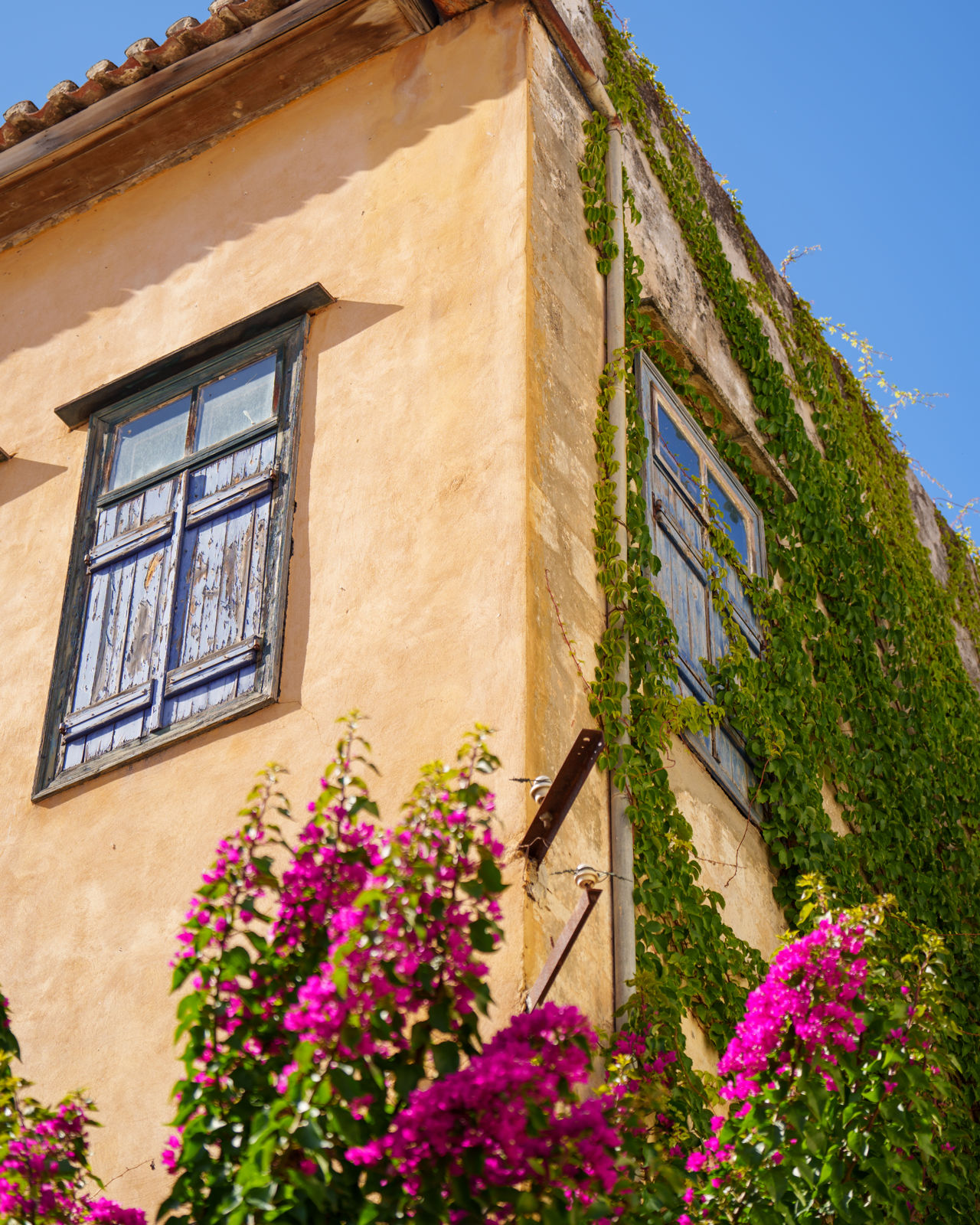 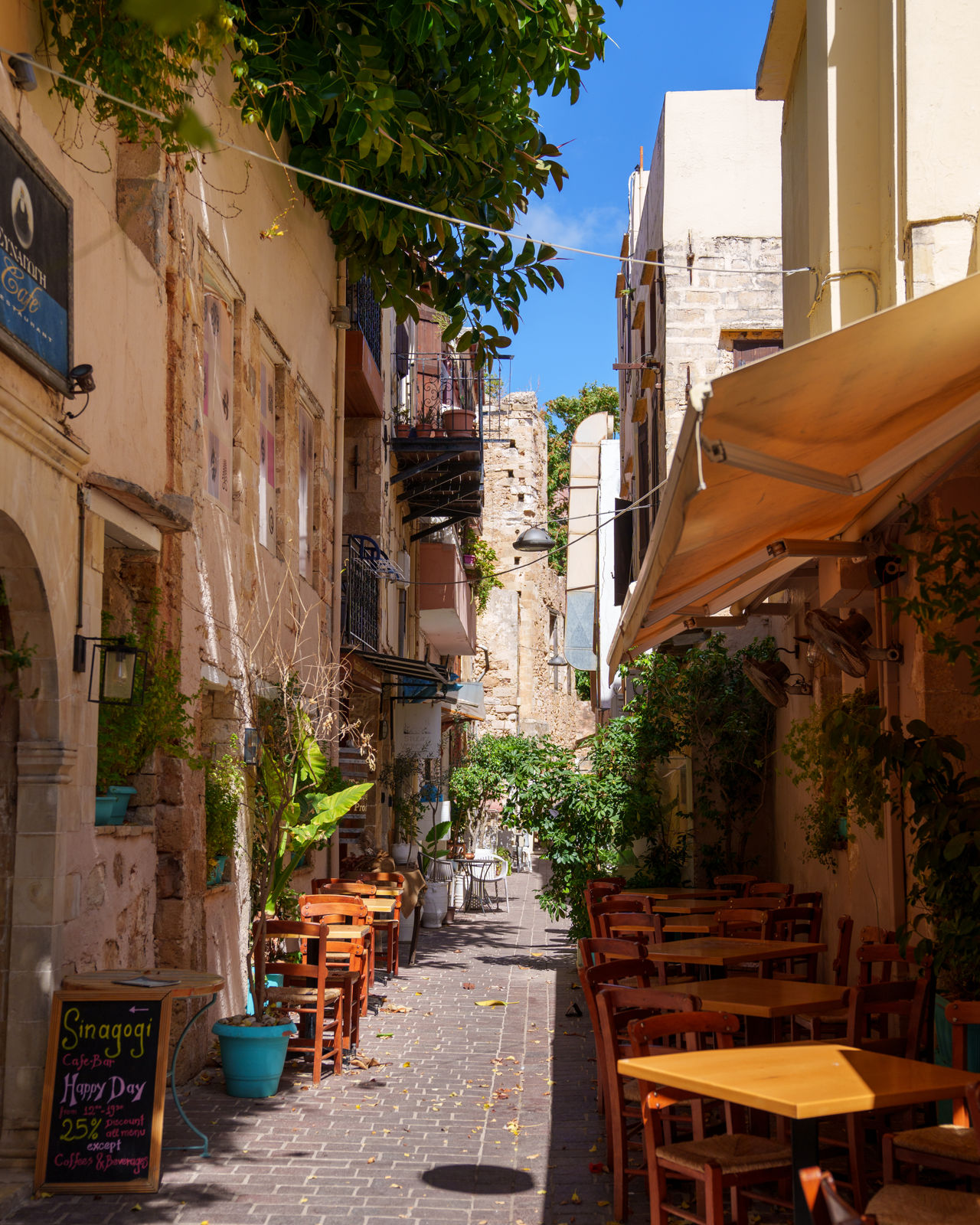 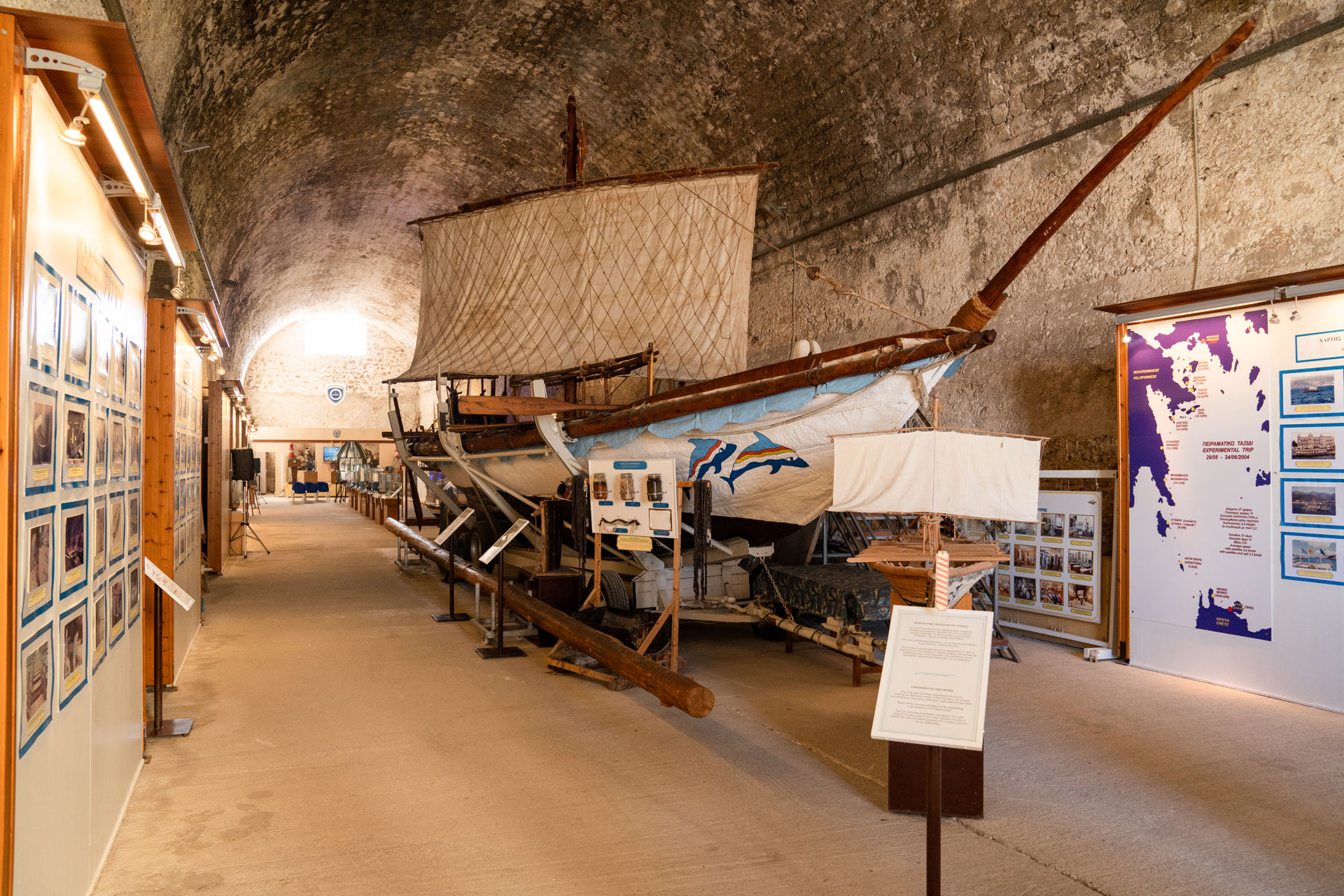 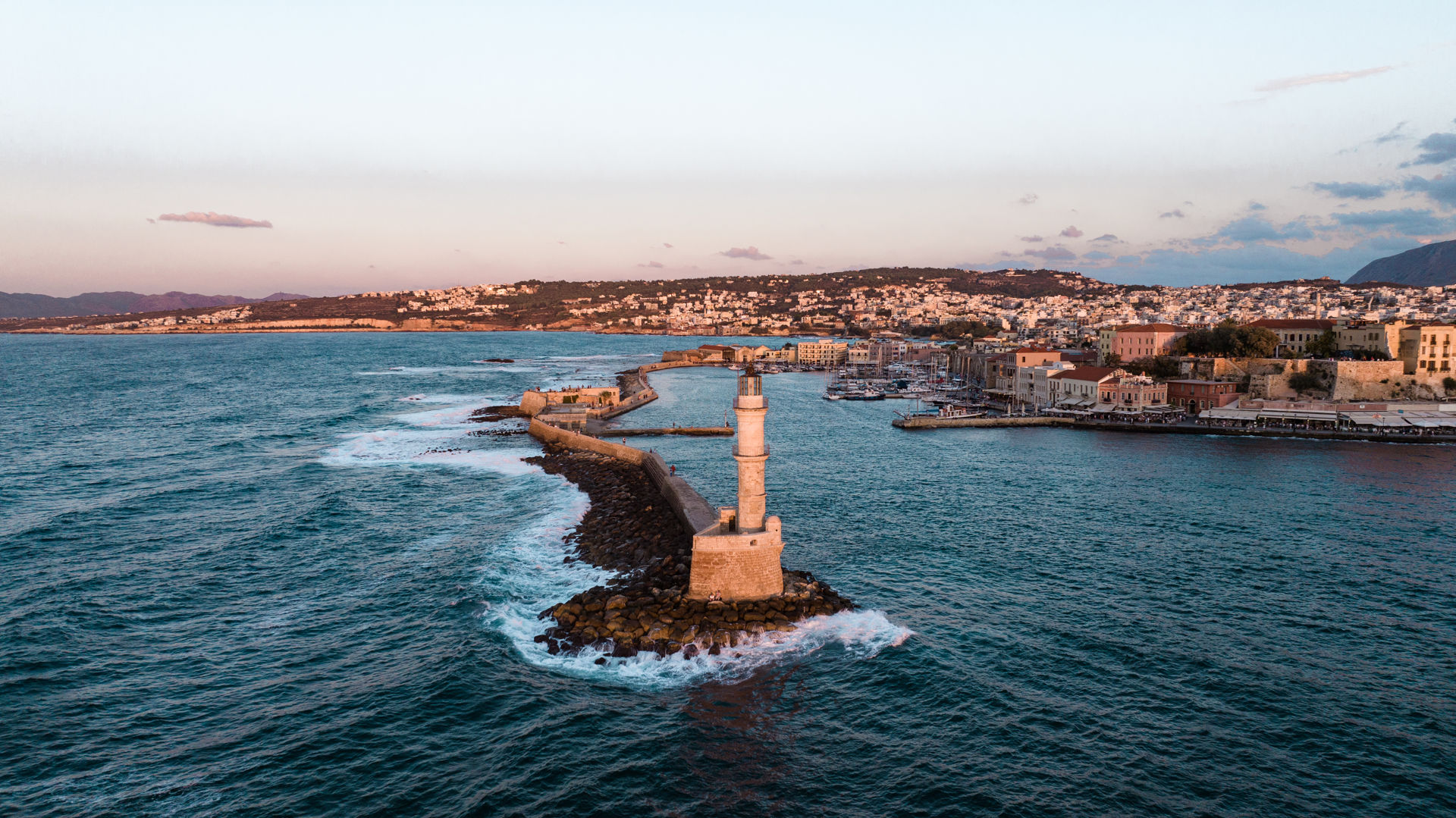 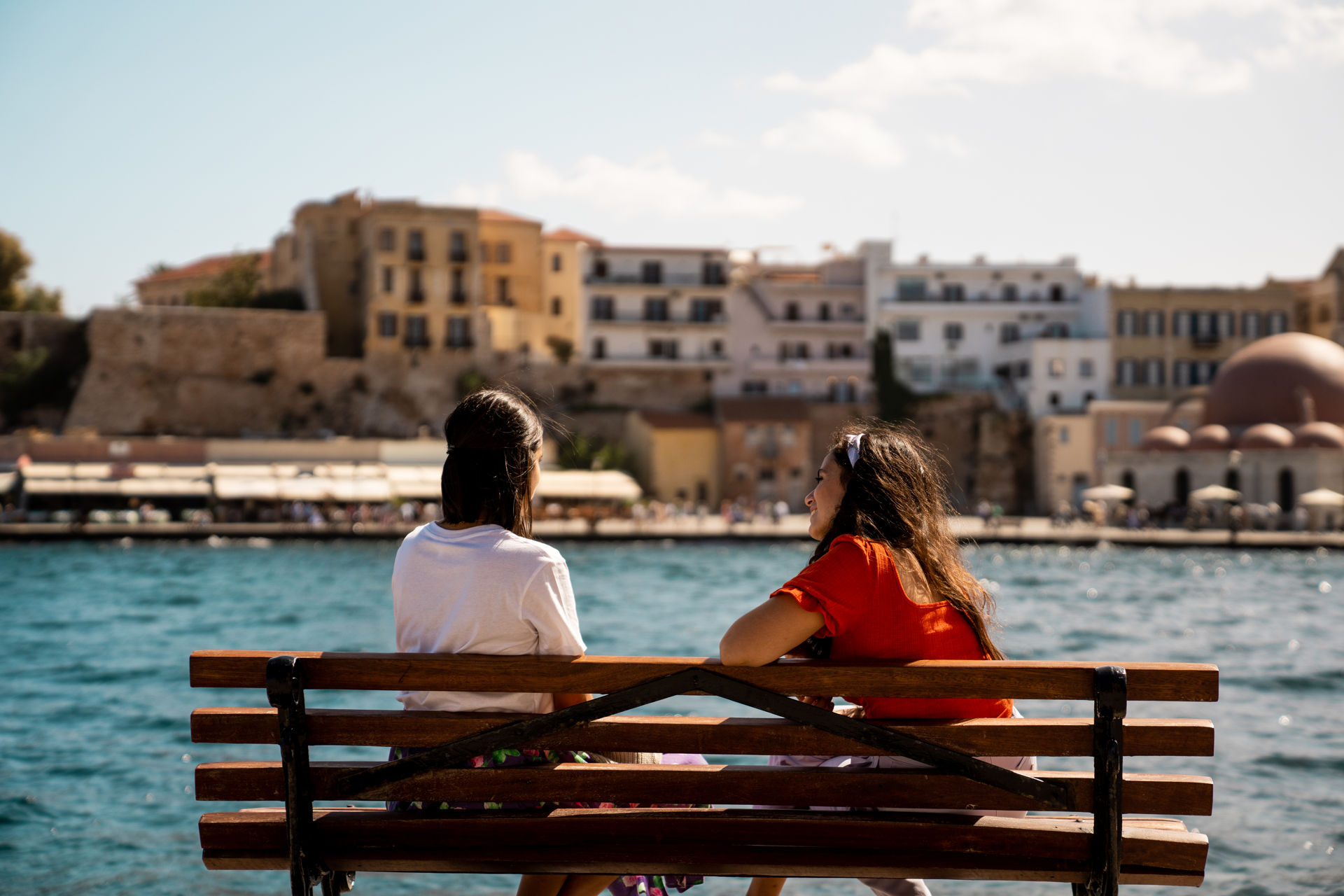 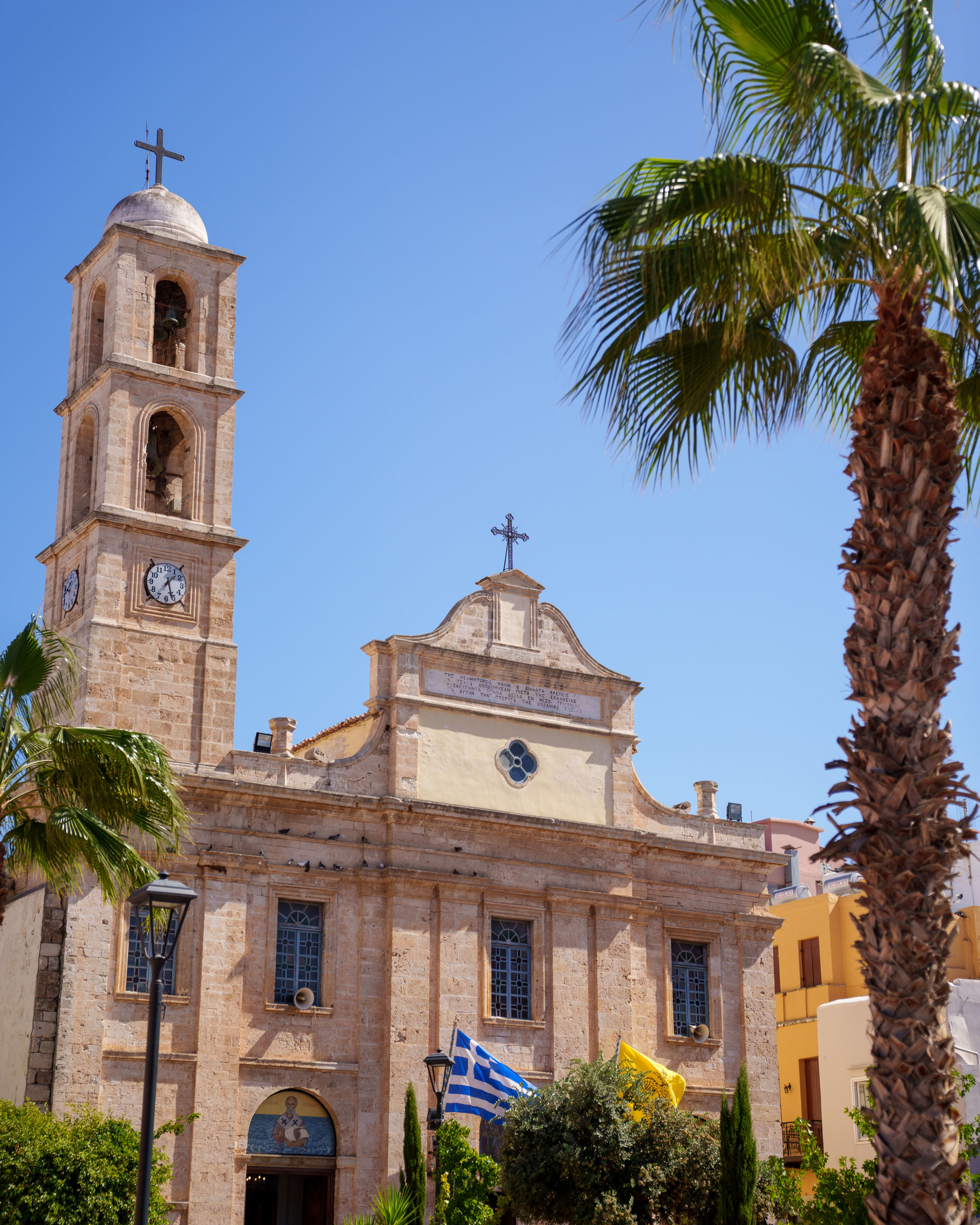 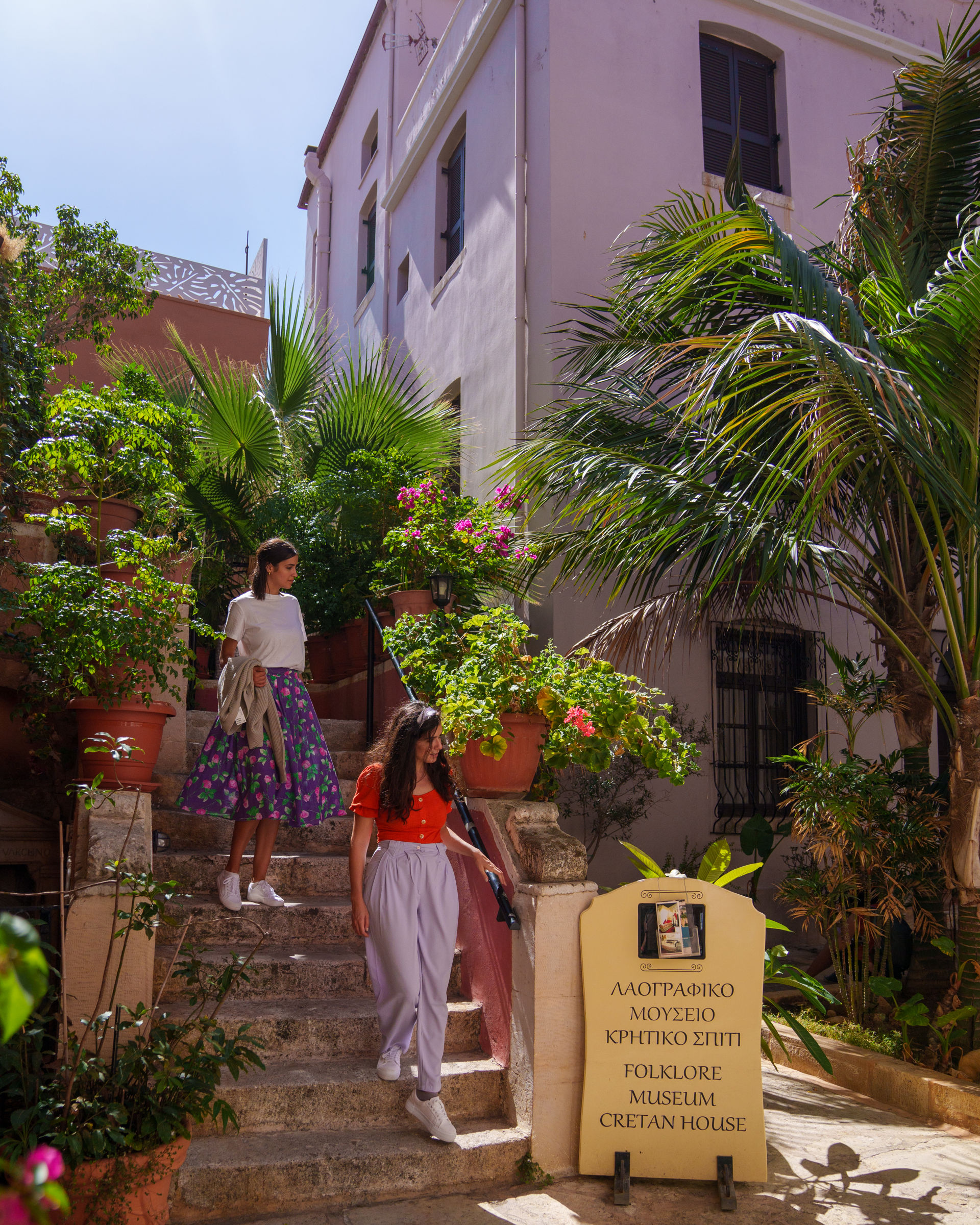 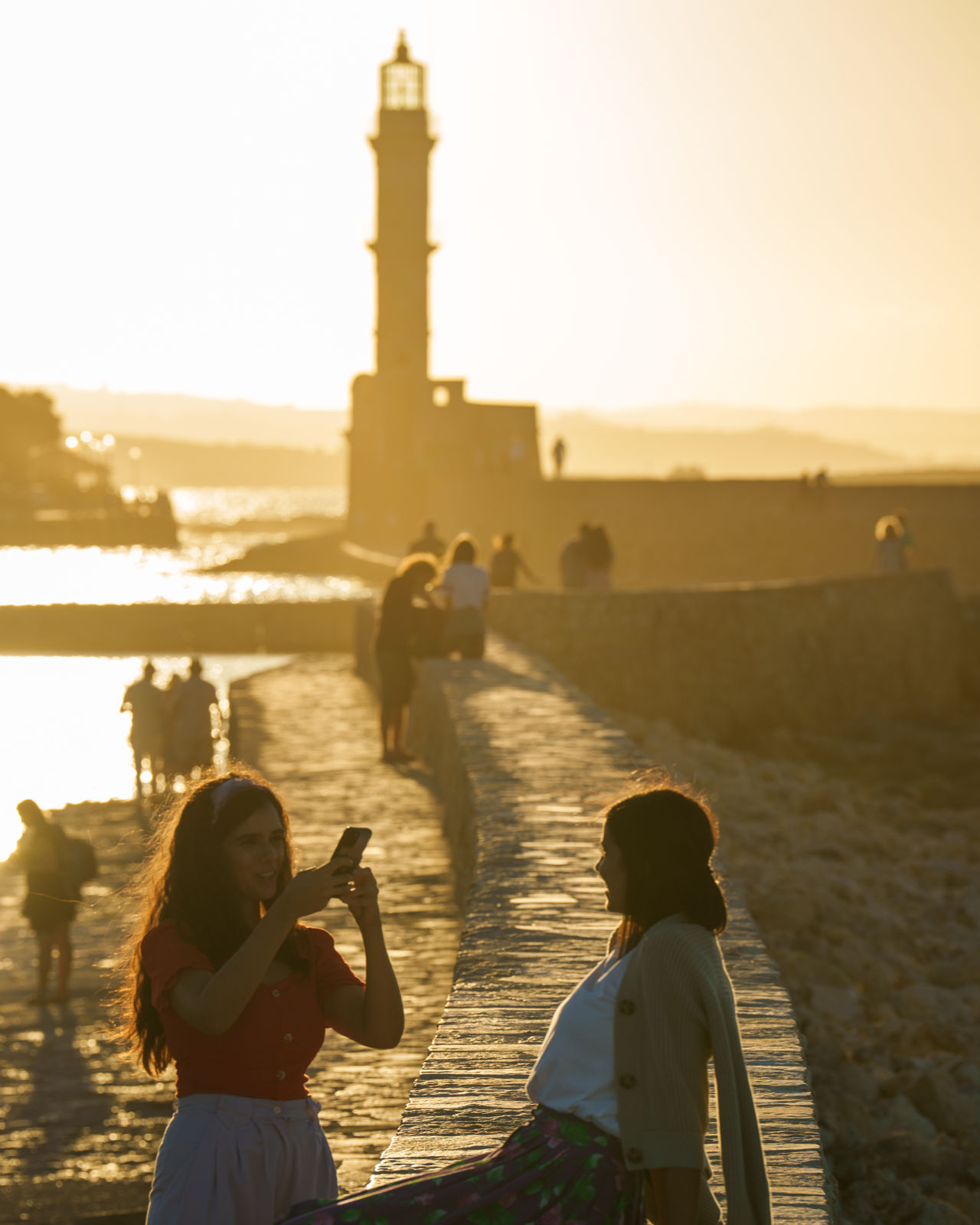 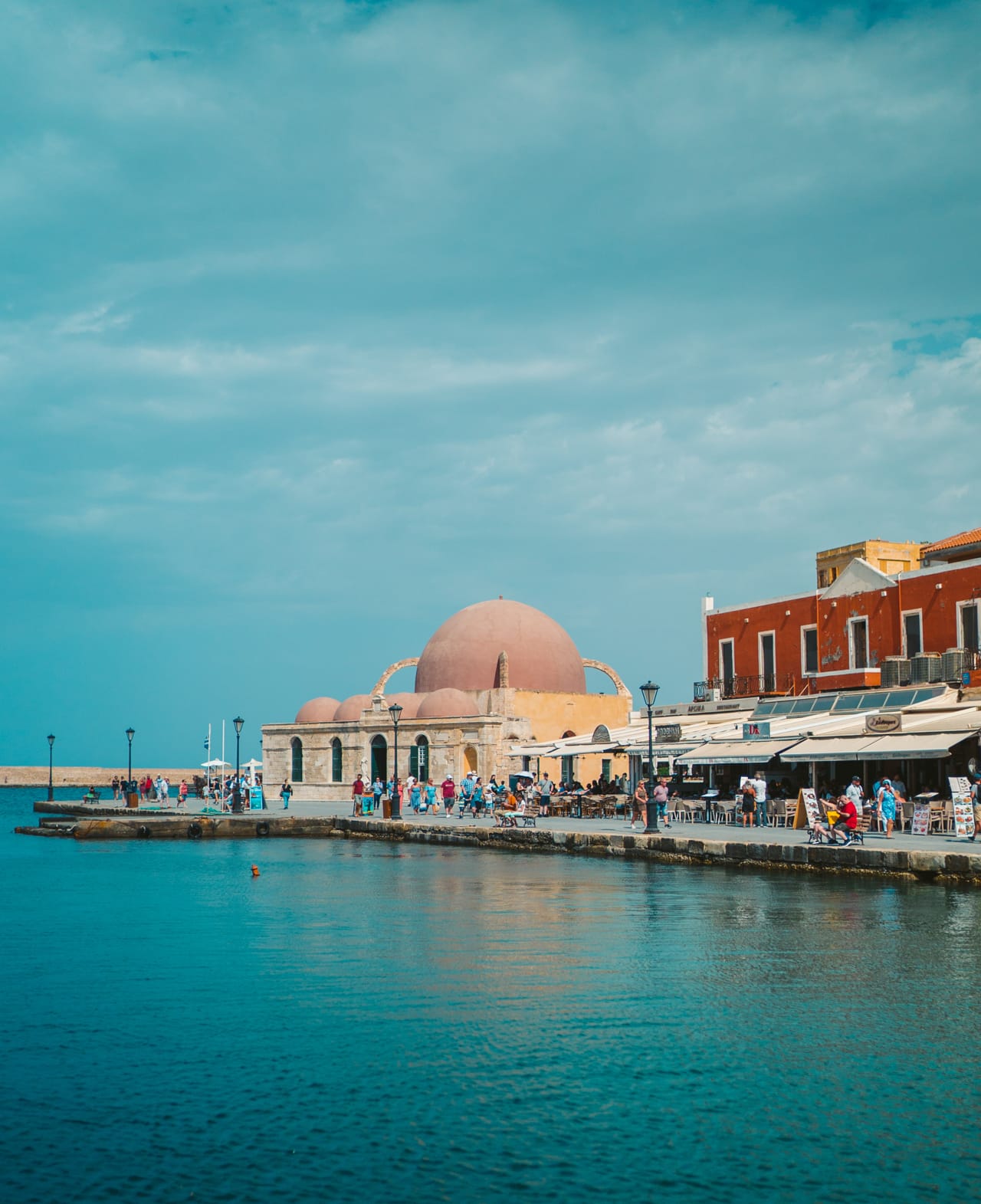 The Venetian port of Chania 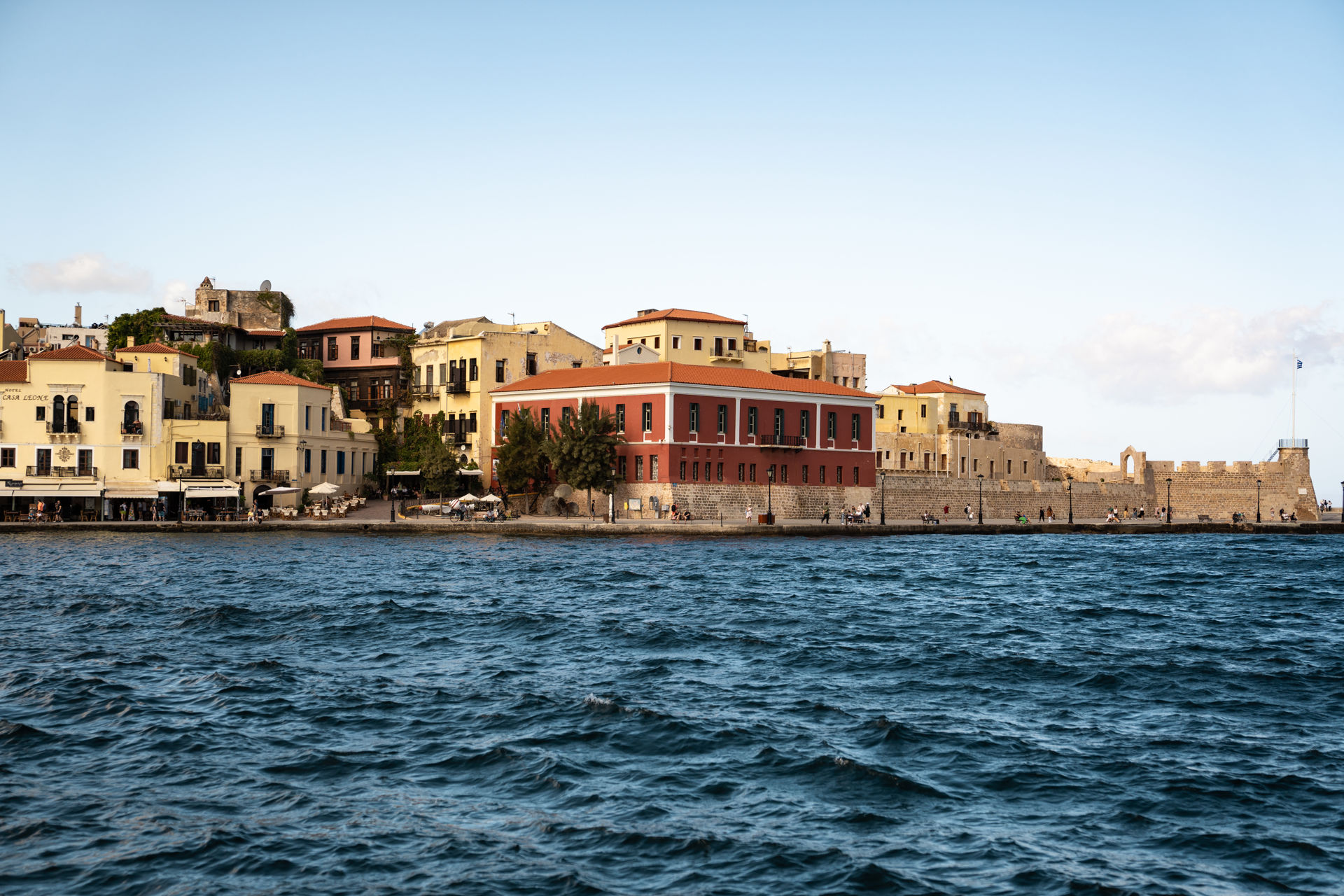 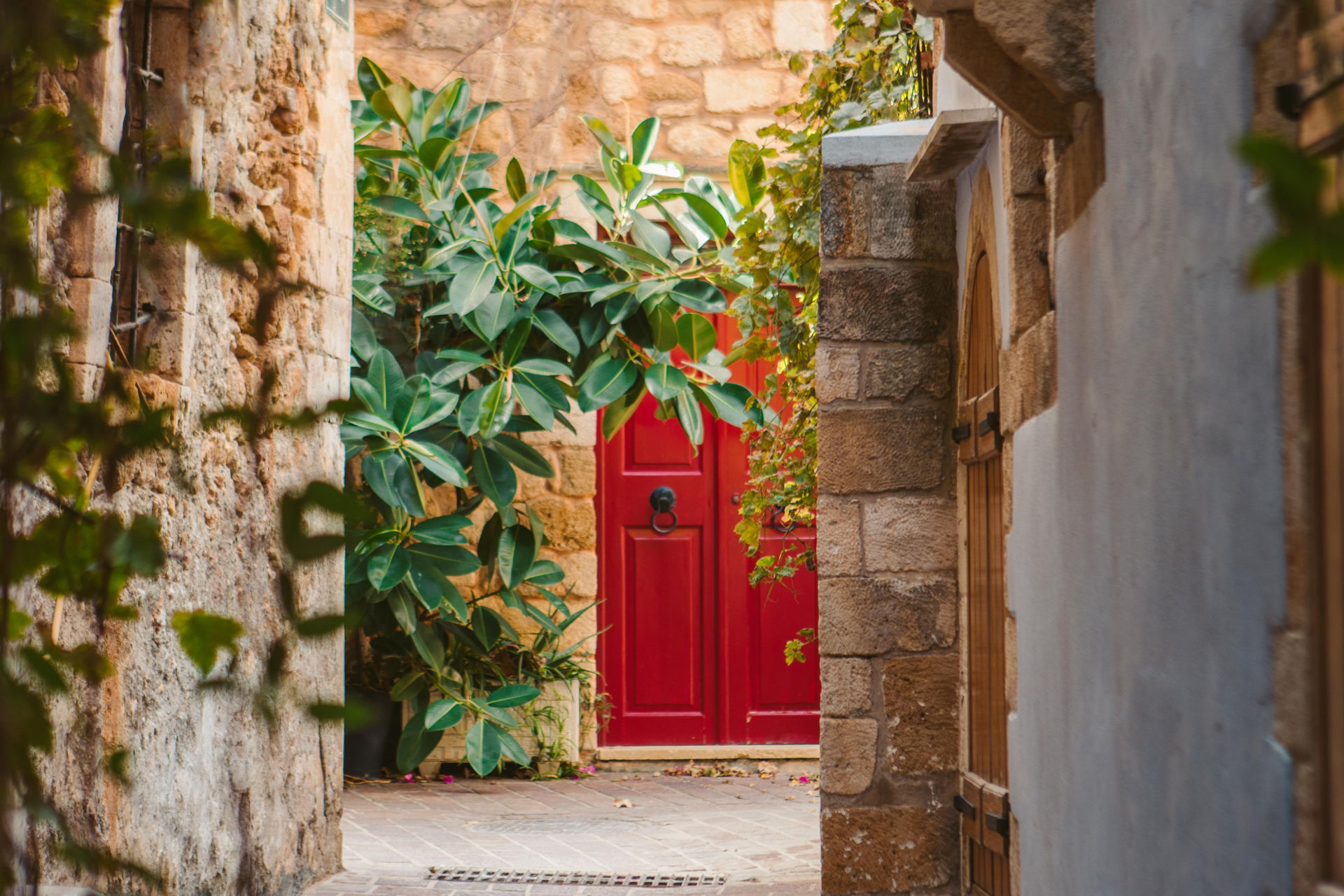 Walking tour of the Old Town 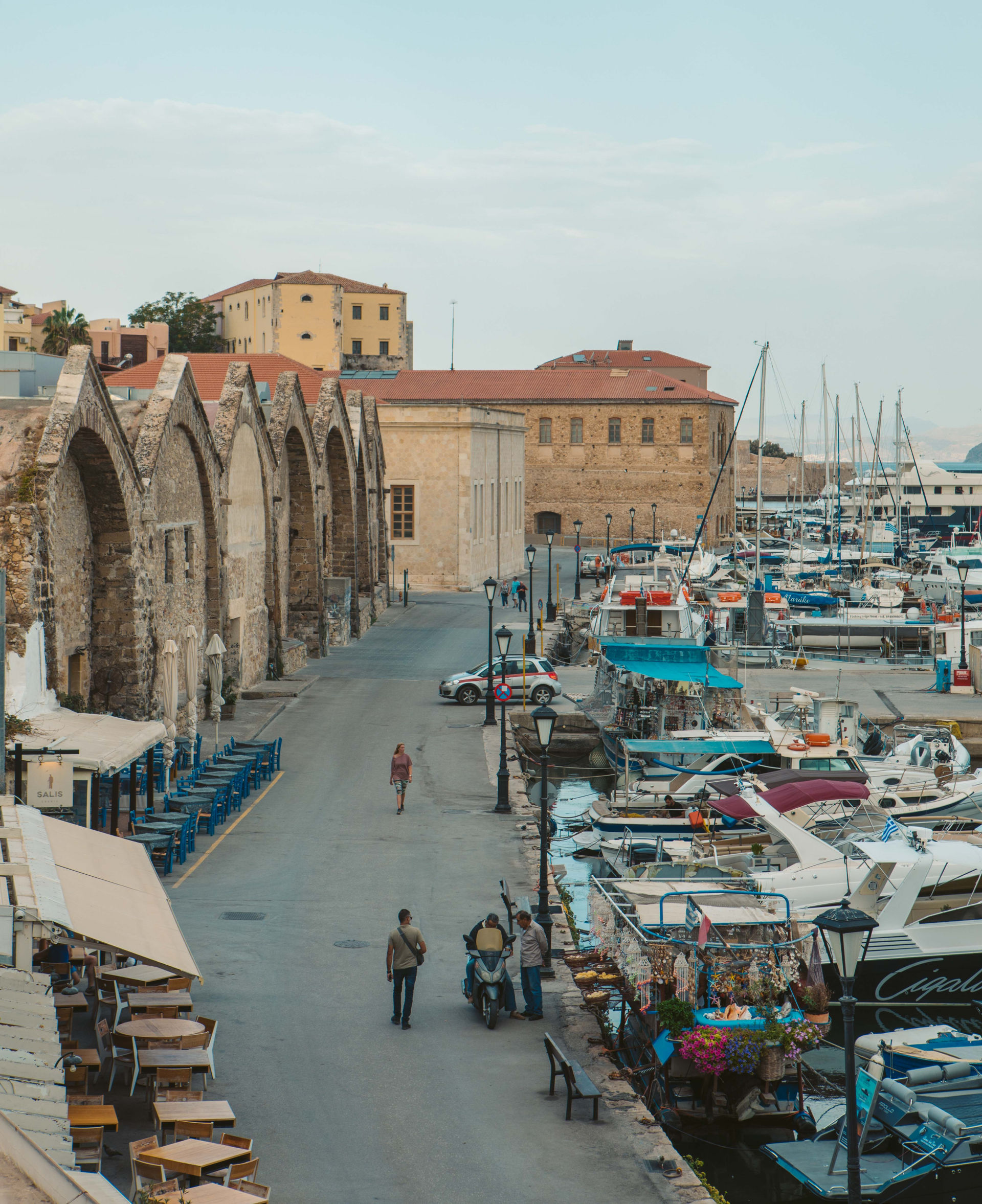 Seafood dining with a view 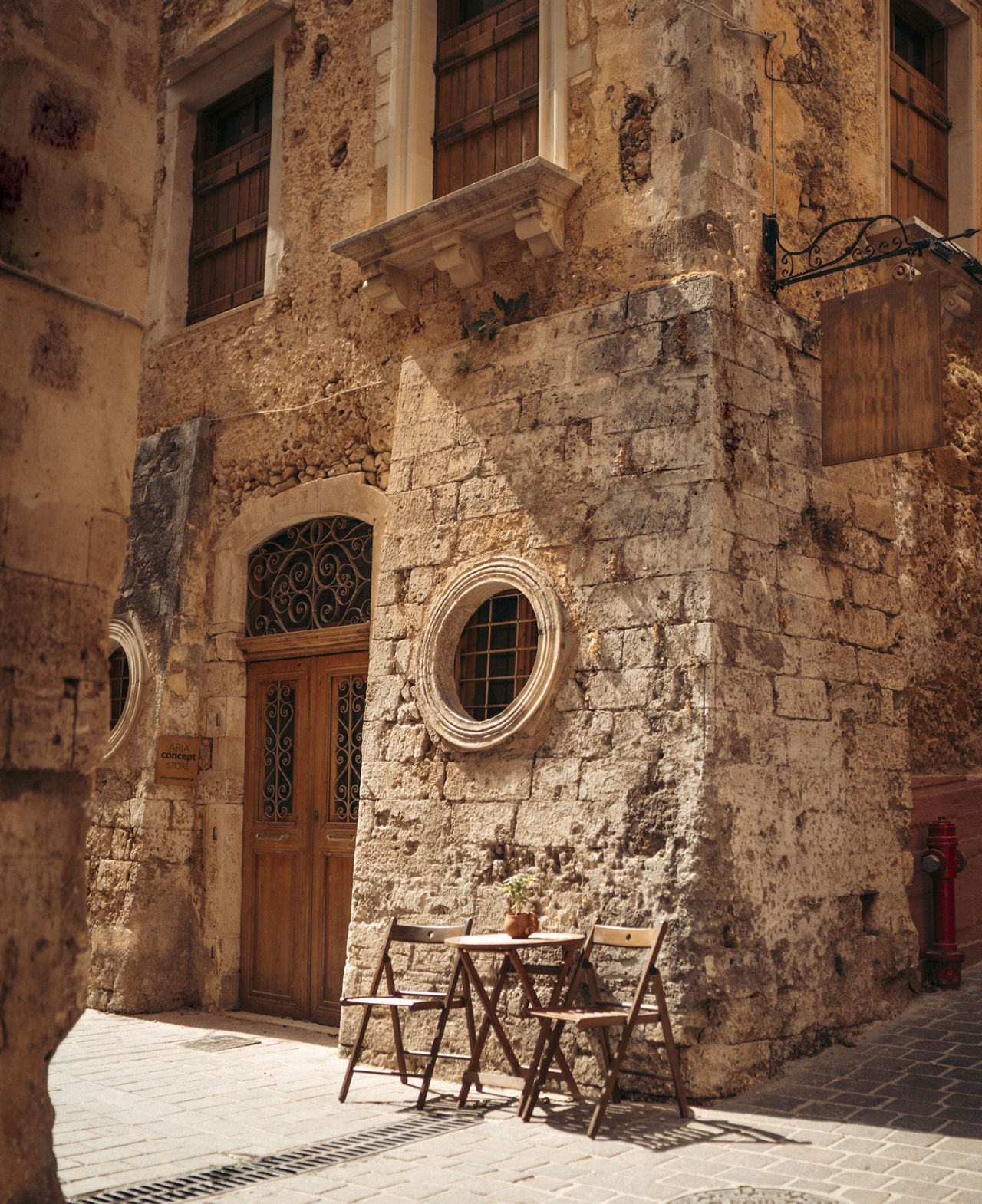 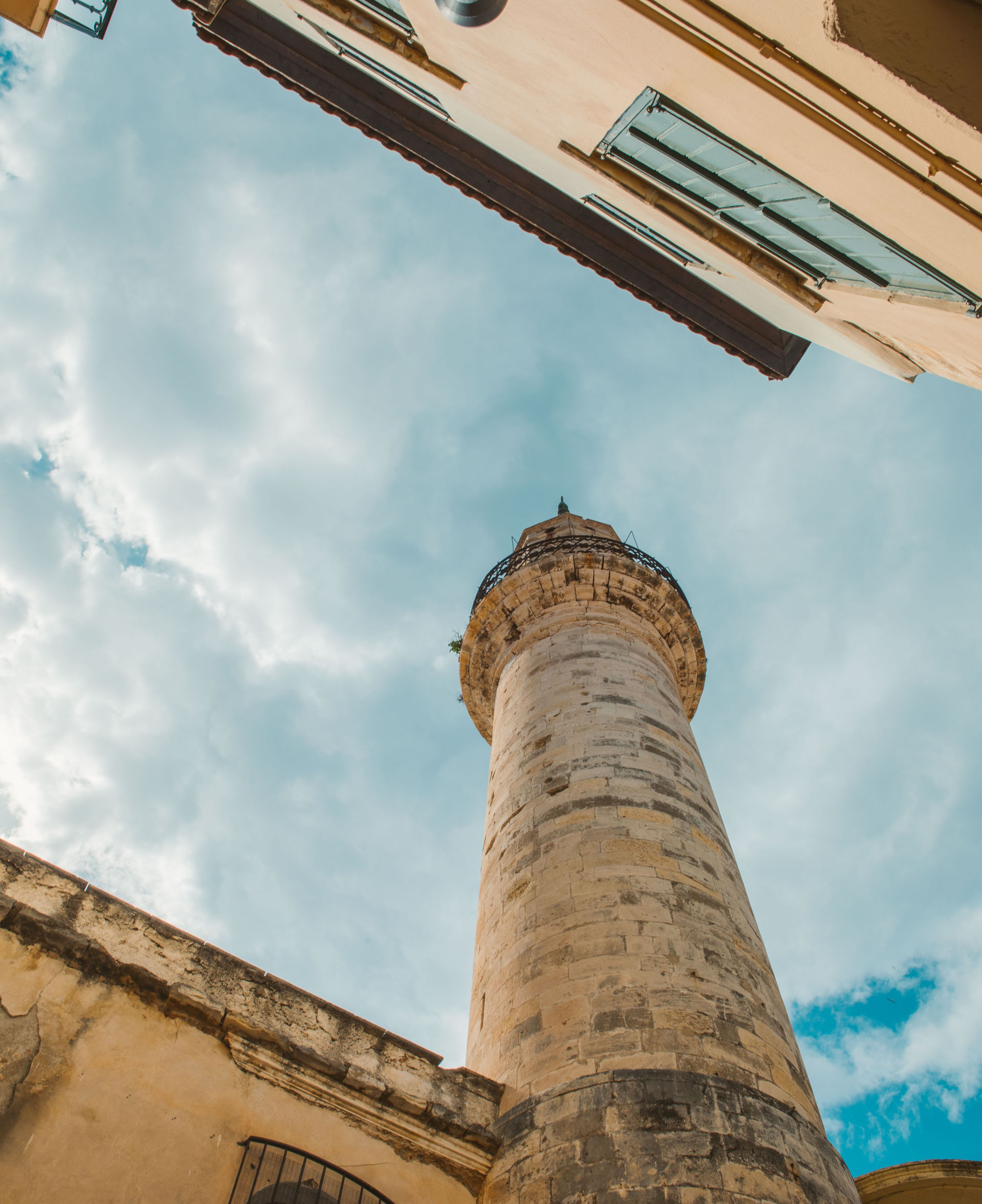 Your walking tour of Chania Old Town begins in the Venetian Harbour whose multicoloured buildings and collection of waterfront tavernas, cafes and bars create a special atmosphere at any time of day. The Egyptian Lighthouse ahead of you is one of Chania’s defining symbols, framing photos towards the sea and the perfect sunset spot. It was actually constructed by the Venetians toward the end of the 16th century before Crete was occupied by the Ottomans and then gifted to the Egyptians in the 19th century, who reconstructed it (hence the name). It also happens to be one of the oldest surviving lighthouses in the world. It’s worth walking around the harbor to the lighthouse, from where you’ll gain another perspective of the old town. Everywhere you explore, you’ll discover a melting pot of cultures. The Kucuk Hasan Mosque, just by the port, was built by the Ottomans in the 17th century on top of an ancient Greek temple and offers yet another form of architecture.

One of the most impressive monuments of the harbour, the Neoria (narrow, stone buildings once serving as ship repair yards) were built in the 16th century when the Venetian fleet dominated the Mediterranean and needed constant maintenance. In total, 23 shipyards existed, of which the Megalo Arsenali in Katechaki Square stands out, not just because of its historical significance but because of the waterfront tavernas and restaurants alongside it, with views of the Neoria and boats in the harbour. At the end of the pier, you’ll find the Museum of Ancient Shipbuilding along with a replica of the Minoas, a Minoan-era ship from the 16th-15th century BC. Built in 2003, it made its maiden voyage to Piraeus carrying the Olympic Flame for the 2004 Athens Olympics.

Heading over to the west side of the Old Harbour (directly opposite the lighthouse at the sea entrance to the port), you reach the Firka Fortress. Built by Venetians shortly before the Ottoman occupation in 1645, Firka was used as a barracks and command post and is where the Greek flag was symbolically raised for the first time after Crete’s liberation in 1913. The Maritime Museum of Crete is found at the entrance to the fortress, in which you can learn all about Crete’s seafaring history from antiquity to the battle of Crete (1941) through replicas of ships, shipwreck findings, documents, navigation instruments and more. Follow that by exploring the inside of the fortress and admiring the panoramic views of the port.

As you leave the fortress, the surrounding neighbourhood (up to the junction of Zambeliou and Douka streets) is known as Topana. It is famous for its 17th and 18th century Venetian architecture and Turkish bathhouses and was Chania’s Greek quarter during Ottoman times (the Turks settled in the affluent Splantzia and Kastelli districts). Take a walk along Aggelou Street and the cobbled alleyways around it, where you’ll find tasteful souvenir shops and small tavernas. Meanwhile, the Byzantine and Post-Byzantine Collection of Chania is housed in a 15th-century Venetian convent known as San Salvatore before being turned into a mosque and finally repurposed as a museum in 1997.

The Jewish quarter of Chania is found behind the harbour and is demarcated by Zampeliou, Portou and Halidon streets. Prominent Jewish families concentrated on Kondilaki Street, which is also the location of the Kehal Hayyim, the sole surviving synagogue on Crete. This neighbourhood is full of architectural curios and shops, tavernas and restaurants.

Right where the Jewish quarter ends, Athinagora Square begins. This is your opportunity to admire Chania’s cathedral, dedicated to Panagia Trimartyri (Virgin of the Three Martyrs), the patron saint of Chania. Originally built in the 14th century during Venetian rule, it has a curious backstory as is was used as a soap factory during Ottoman times but rebuilt with the help of an Ottoman chief after his child fell into a well and was miraculously saved following his prayers to the Virgin Mary. Opposite the square is the Folklore Museum of Chania (also known as the Kritiko Spiti, or Cretan House). Amongst the displays are embroidered textiles from all over Crete. And if you’re an art lover, the nearby Municipal Art Gallery has an interesting collection of local fine art.

Wrapping up your walking tour of Chania Old Town, you reach Splatzia Square, the heart of the Turkish district during the Ottoman occupation. The shade-giving trees and multitude of traditional tavernas give the square a special atmosphere. You’ll also find the Church of Agios Nikolaos here, whose history dates to an original church built by Dominican-order monks in 1320. It has survived various transformations over the centuries, before settling on its final incarnation in 1918.

Group
Combine some of the most unique panoramic views, visit traditional Cretan villages and find out all about the lifestyle of a Cretan shepherd by exploring...
Group
Combine a unique safari tour in the White Mountains of Crete and take in the most incredible panoramic views, visit traditional Cretan villages, learn the...
Group
Premium Sunset Safari Tour in the Northwest side of the inland of Crete... Allow yourself to indulge in a romantic off-road route experience with the...
EXPLORE ALL

Chania
from 86 €
BOOK NOW
VIEW ALL
Book your trip

How do you get to Chania in Crete?

How do you get to Chania Old Town from the airport?

How do you get to Chania Old Town from the port?

When is the best time to visit Chania in Crete?

Tip: If you want to stop for lunch during your walk through the Old Town, it’s worth booking in advance, especially in the summer months.

Byzantine and Post-Byzantine Collection of Chania

How long do you need to explore Chania Old Town?

This experience has been road-tested by Discover Greece, including sending international journalists to live the experience for themselves. Here are some of their highlights:

“Known for its lively atmosphere, Chania has a characteristic old town that is a symbol of its multicultural identity. Beautiful and romantic alleys complement the breathtaking views of the Venetian harbor and the lighthouse. Most of the buildings … have been renovated and look like a mosaic of modern Venetian and Ottoman architecture that keeps the cityscape alive.” 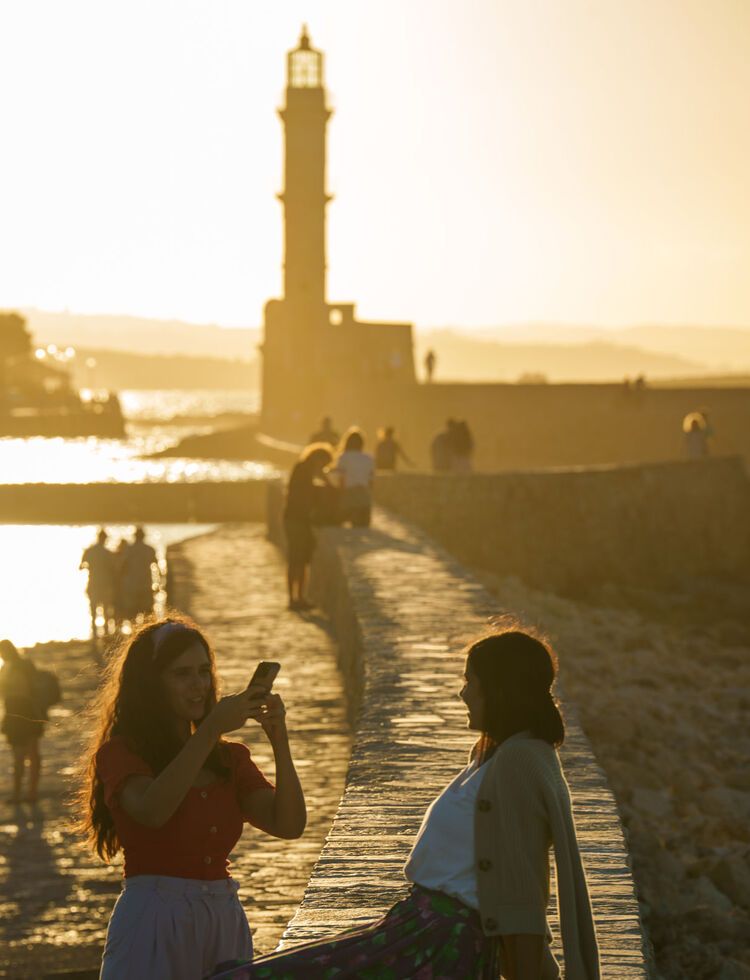 Keep the streets as clean as possible by using the bins provided or, if necessary, keeping your rubbish with you until you find one.
Use a refillable water bottle to try to minimise your use of plastic.
Respect the cultural monuments and relics and don’t use flash photography if there’s a sign forbidding it.
Do your best to support small, independent family-owned stores and local producers, taking home something handmade and local.
Respect the plants and animals.
Be inquisitive and definitely ask the locals for tips.
Read More Read Less