chronis-yan
Taking a walk around Athens is like visiting an open-air museum, with some of the most impressive ancient Greek monuments appearing at every turn. So put on a comfy pair of shoes and let’s set out to discover all those must-see Athens landmarks 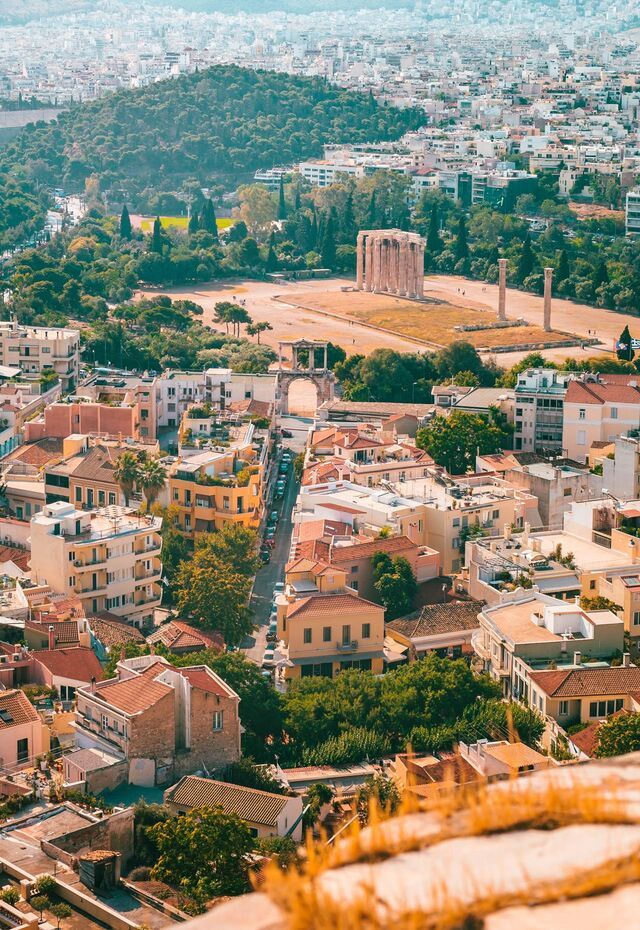 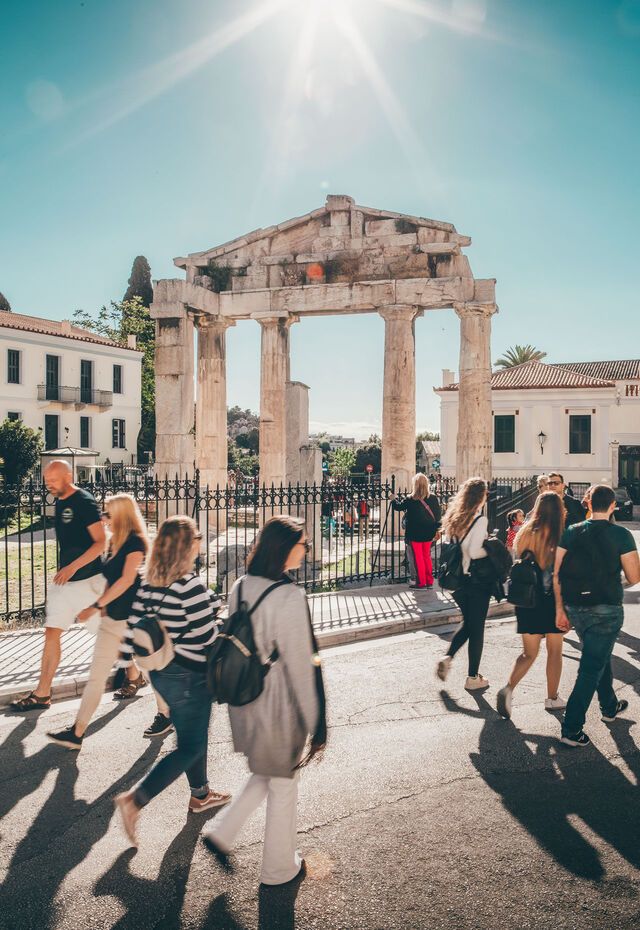 It’s hard to imagine another city that offers its cultural wealth as generously as Athens. You just take a few steps and it’s like a narrator from ancient Greece starts whispering in your ear: You hear Pericles, the 5th-century BC Athenian general, regaling you with stories of his grand designs in the city’s Golden Age, and Hadrian, the 2nd-century AD emperor, telling you how he made Athens the cultural capital of the Roman Empire.

They each take their turn… ancient Greek philosophers, politicians, scientists, athletes, statesmen. All of the Athens landmarks and monuments (and it seems like there’s one every few strides) have a different story to tell.

In fact, you can think of an open-sights tour of historical Athens like a tasting menu. If there’s something that jumps off the plate, just come back and sample it in greater depth another time. So make sure you keep strolling and by the end of it, you’ll understand that all these Athens landmarks are as alive today as they were in antiquity, giving the city a unique ambience which can be regarded as a monument in itself. 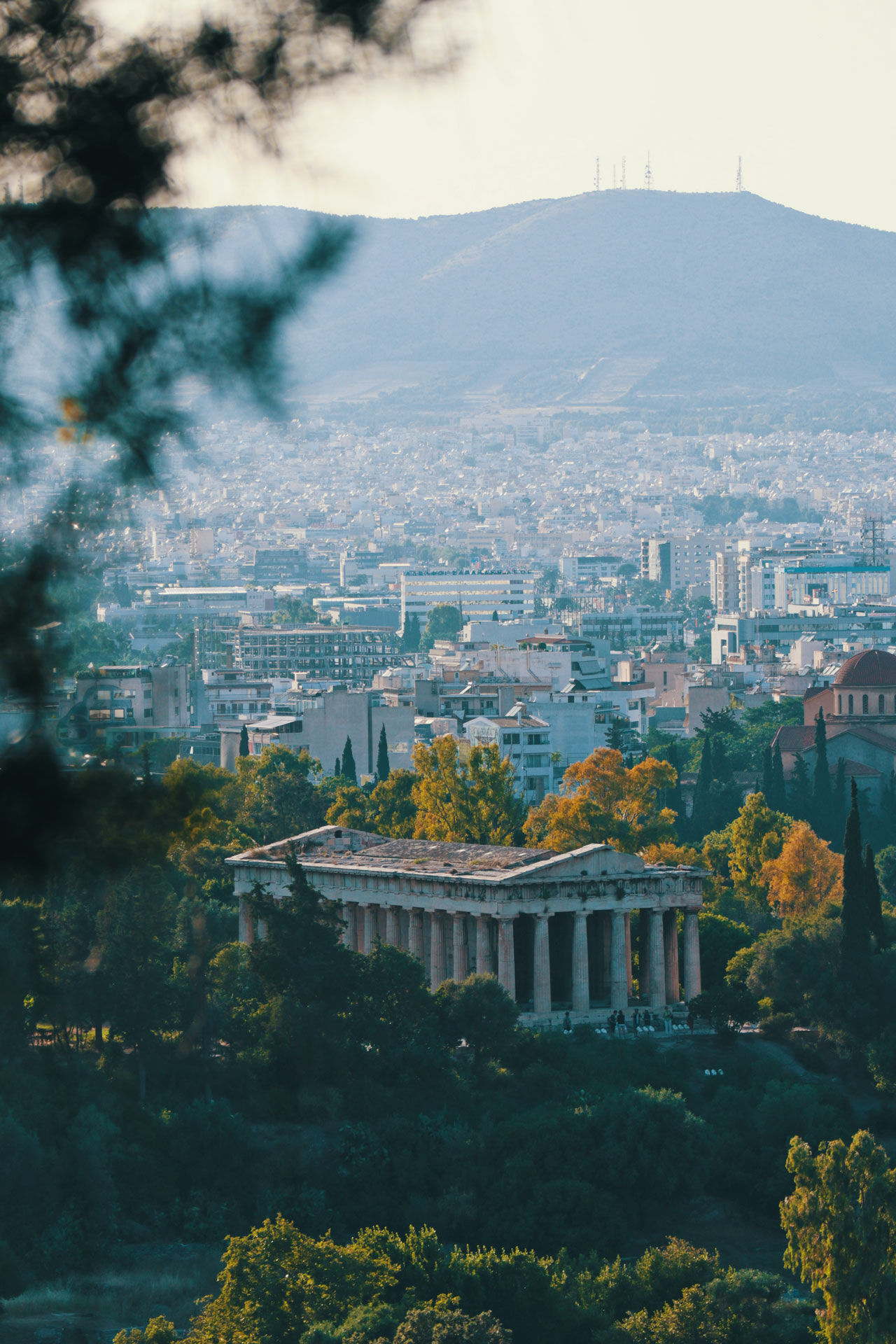 The Stoa of Attalos, named after King Attalos II of Pergamon who had it built as one of the city’s main marketplaces in the 2nd century BC 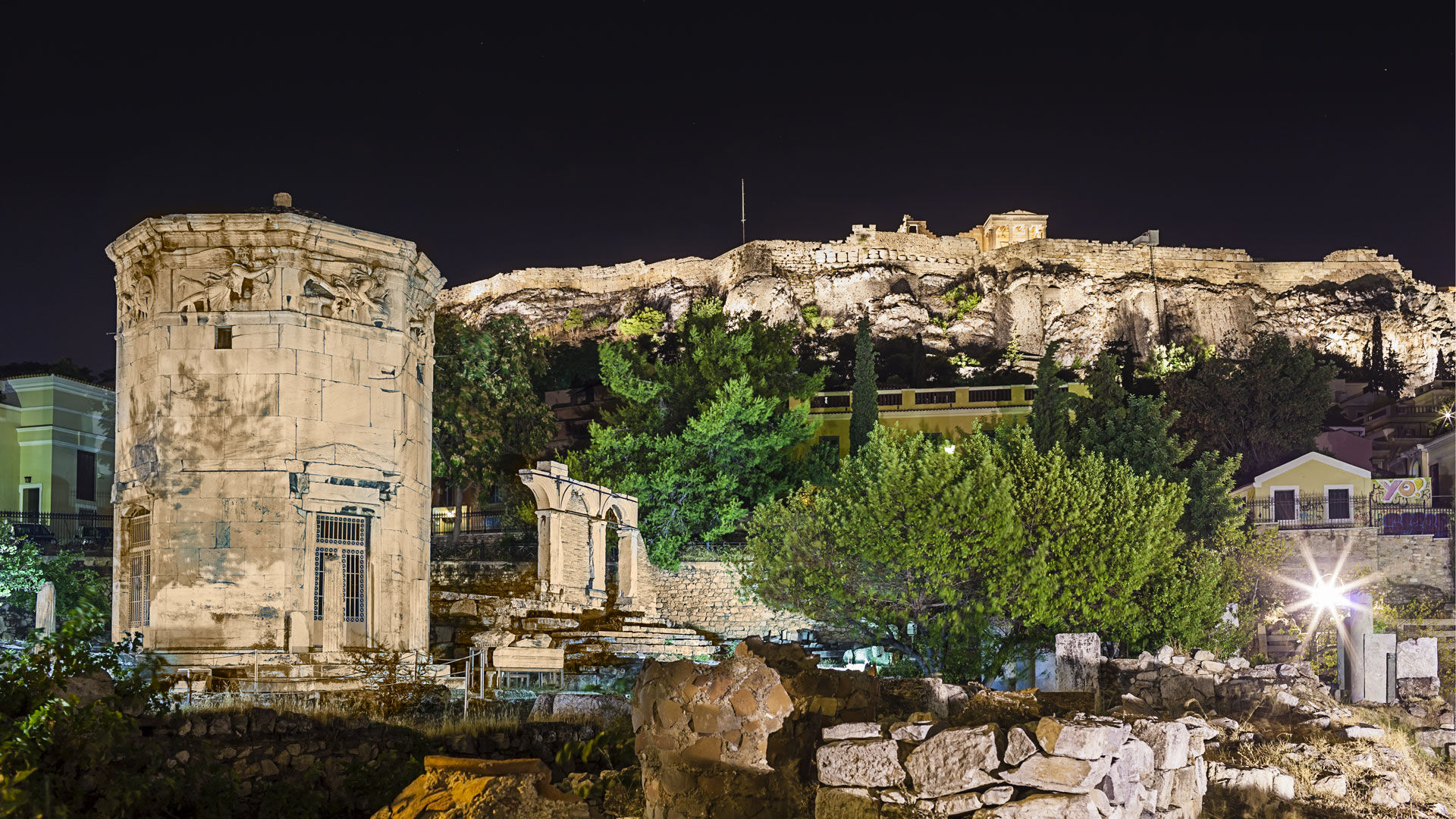 View of the Roman Agora and the Acropolis 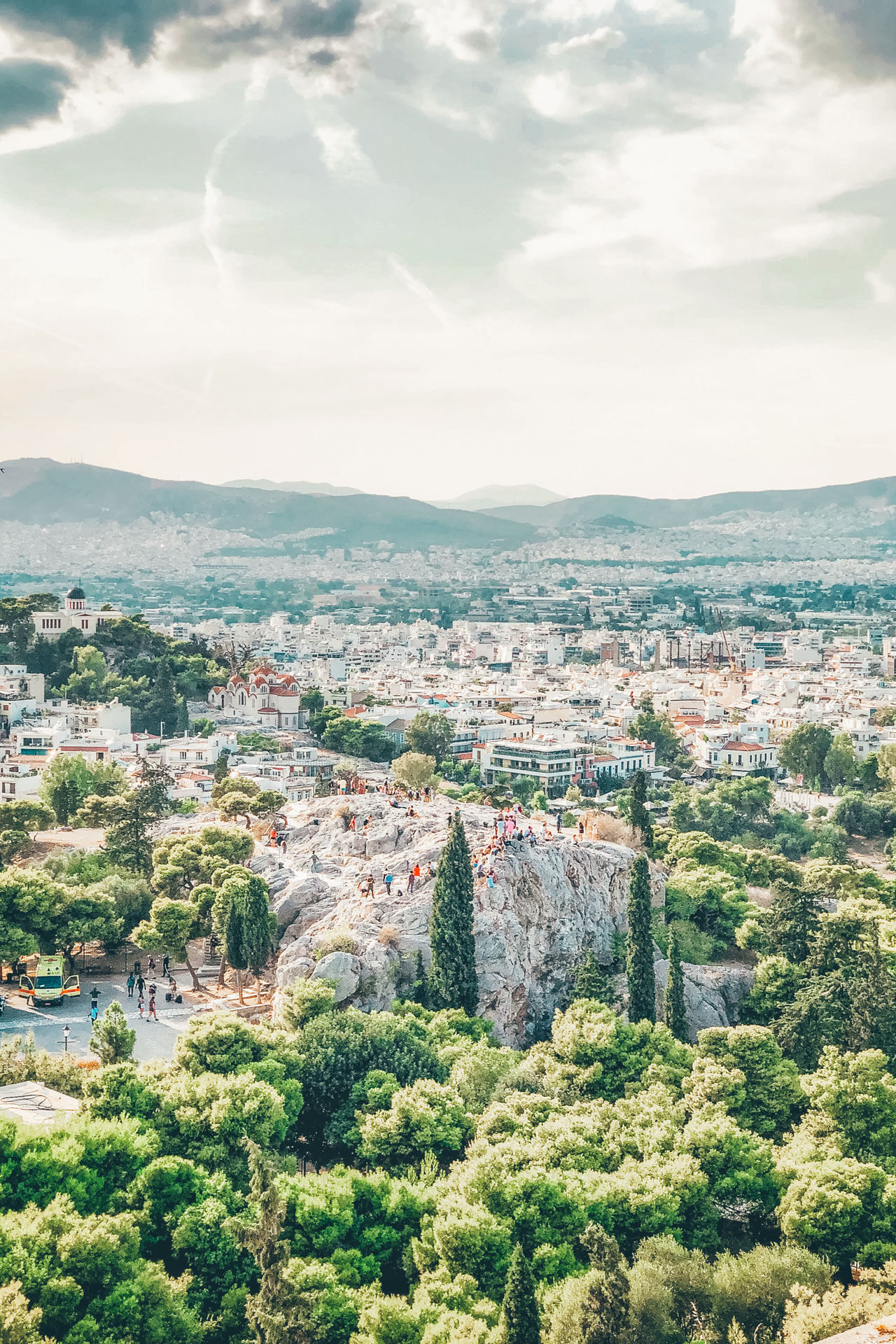 You’ll understand that the monuments are as alive today as they were in antiquity, giving the city a unique ambience
Victor Malyushev 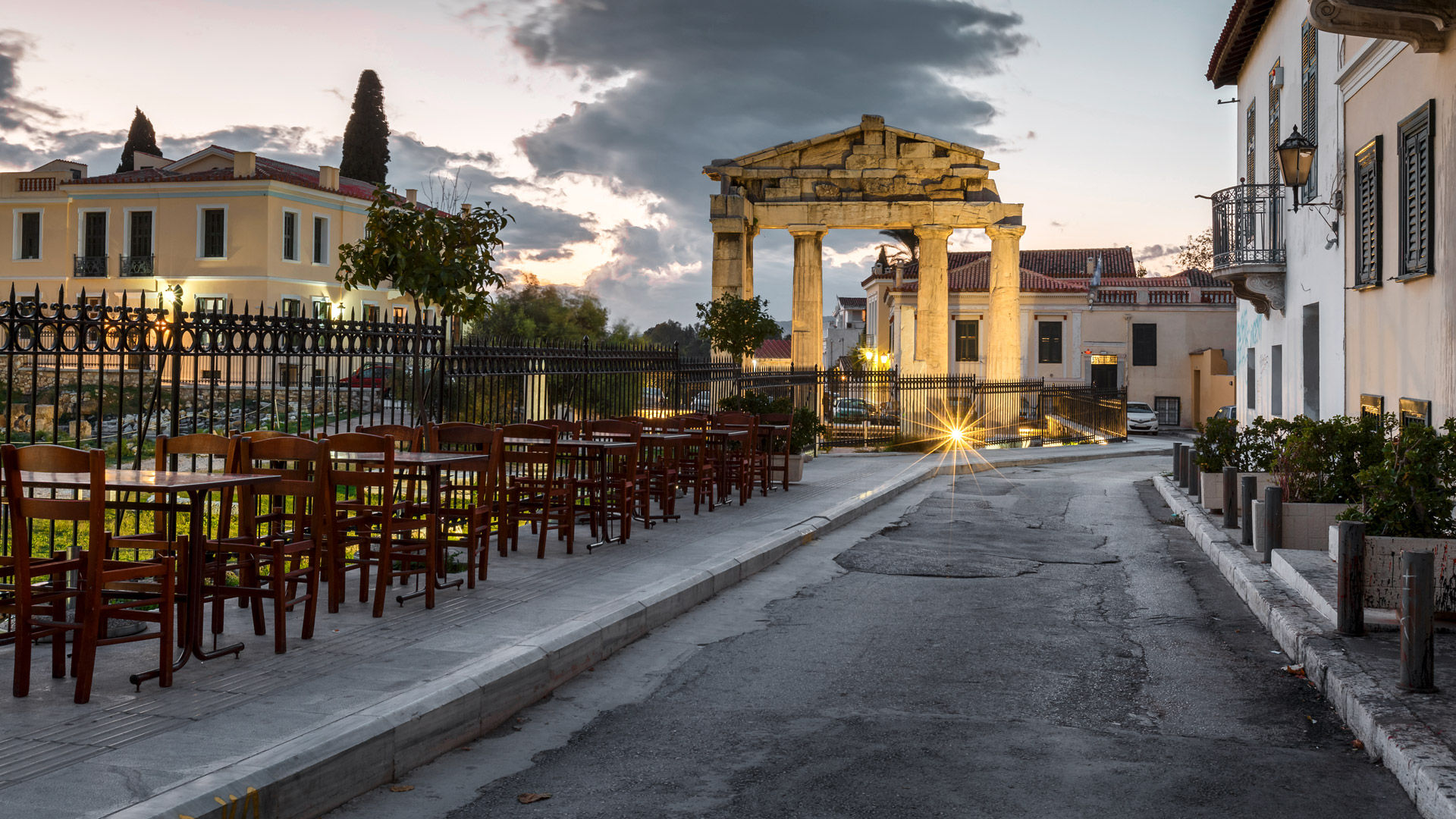 Walking around Athens is like visiting an open-air museum 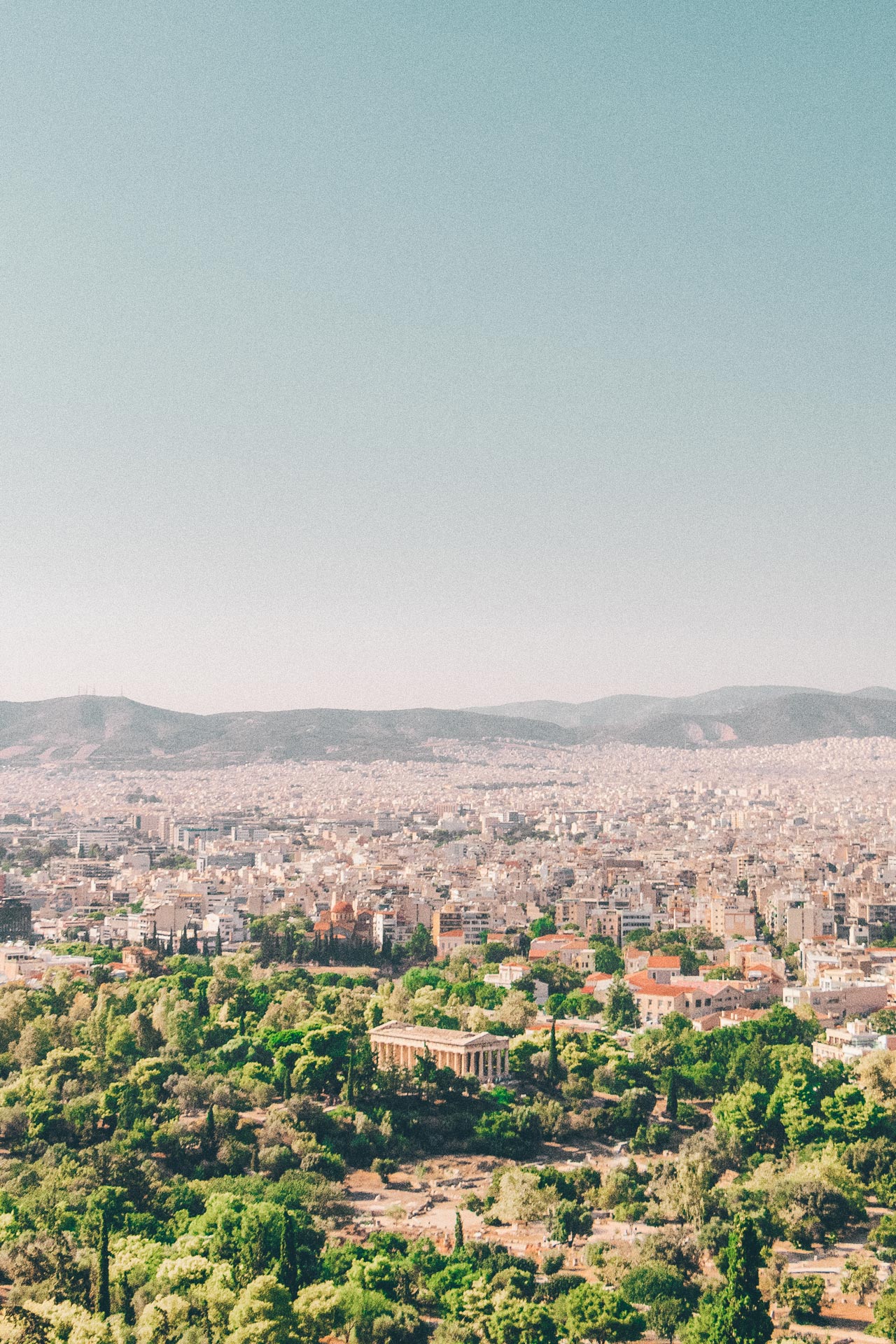 Carrying on beyond the Acropolis, you reach the Ancient Agora
Javier Quiroga 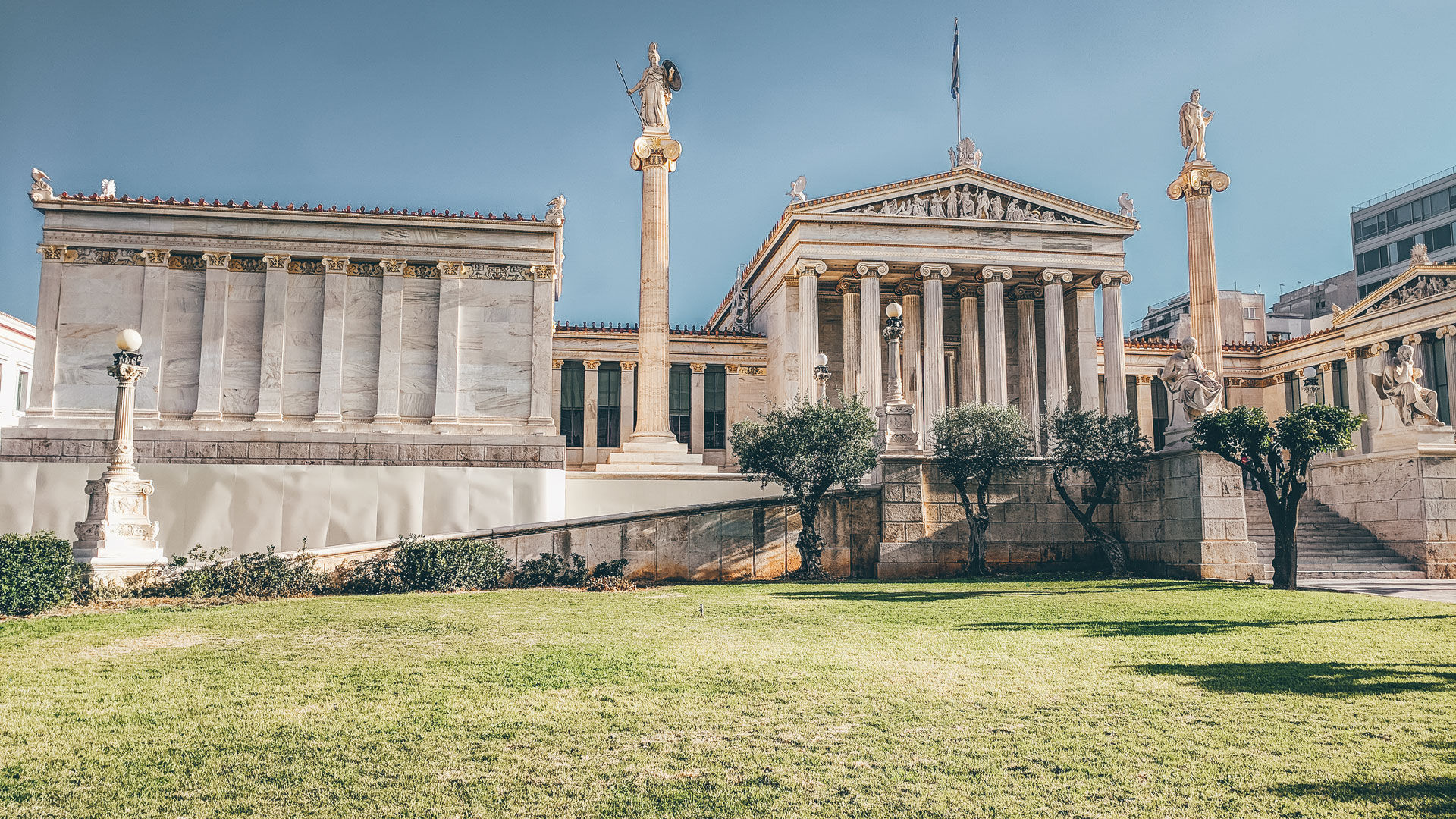 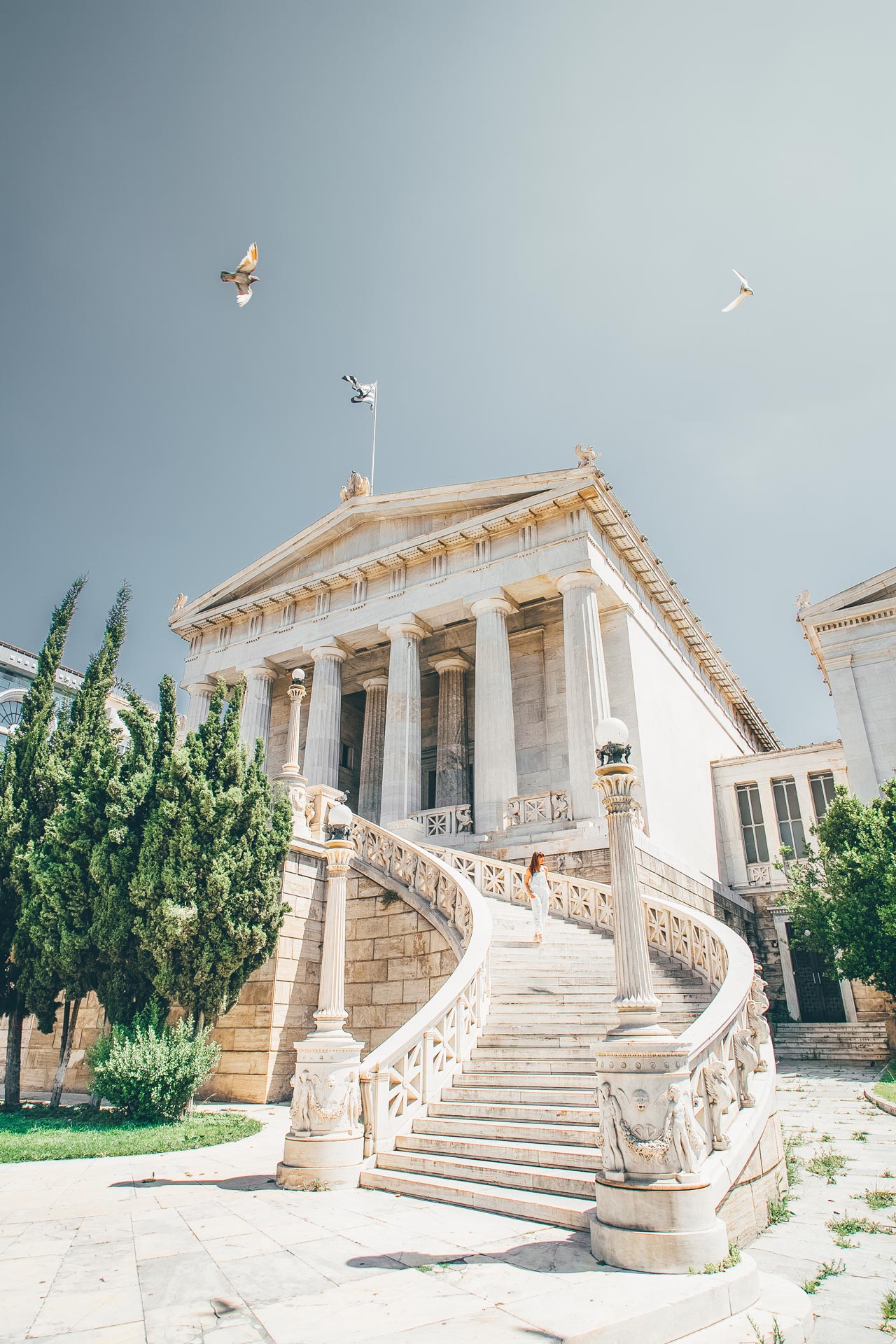 The National Library of Greece 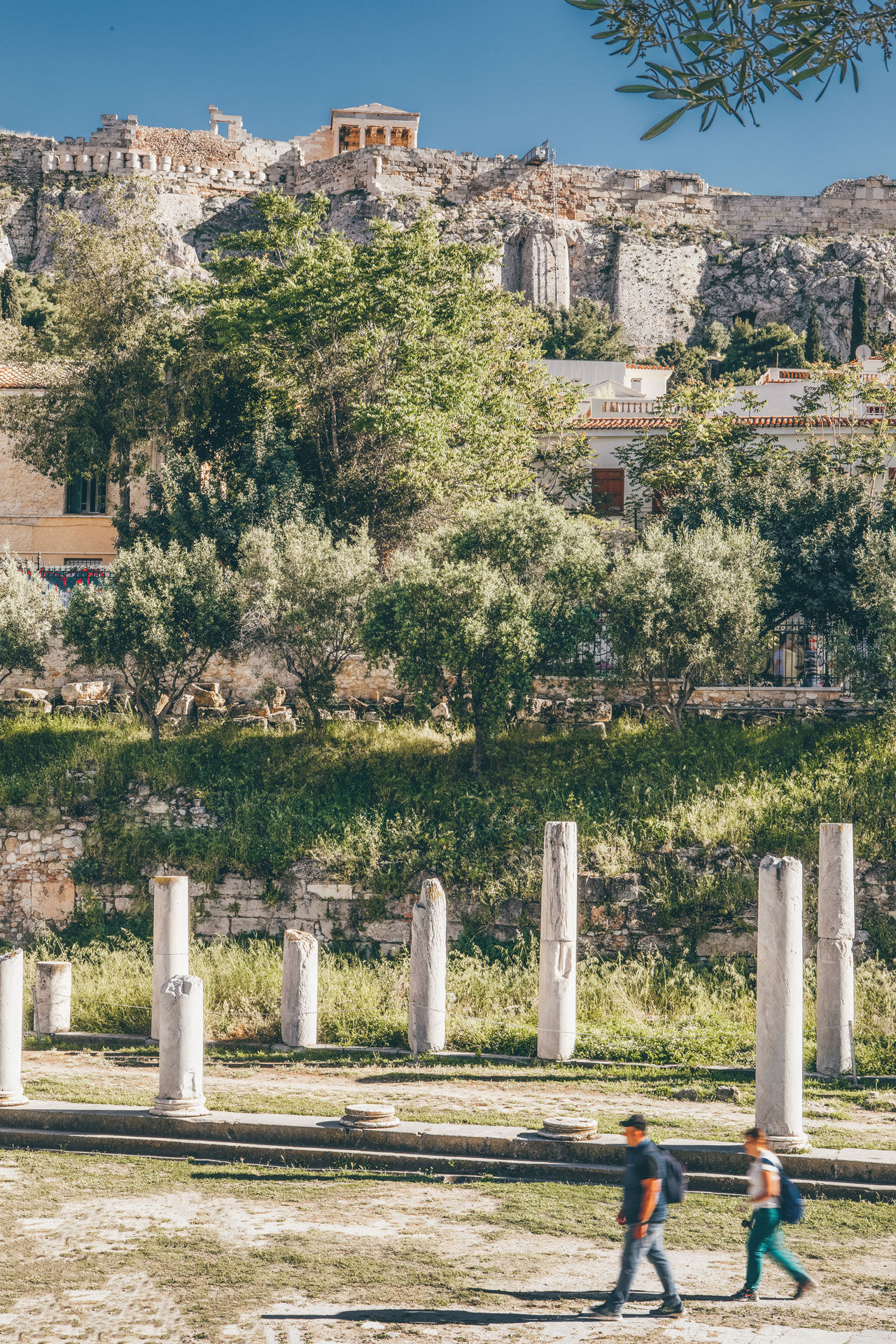 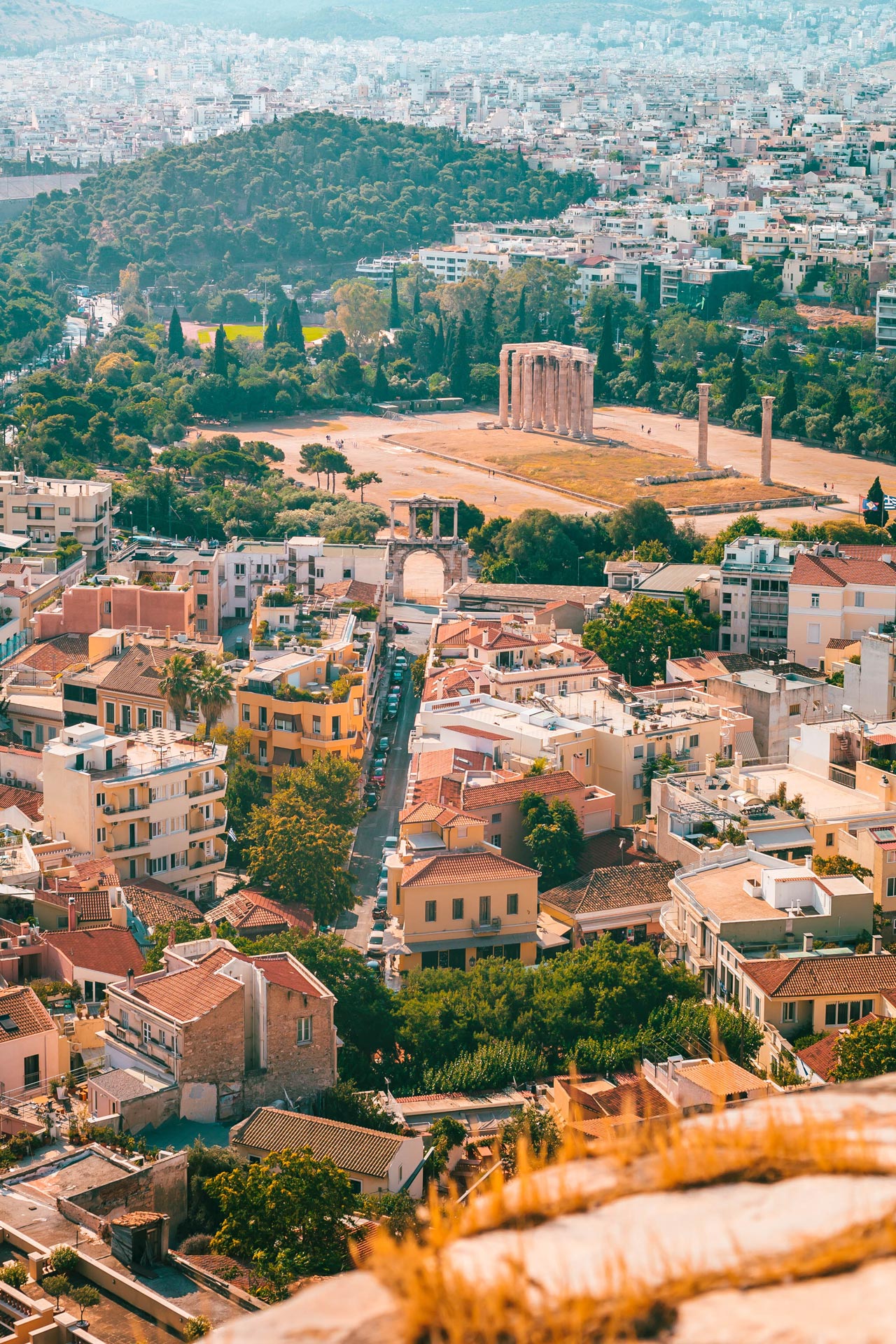 Temple of Olympian Zeus was the city’s biggest temple and, although only 17 of the columns are still standing, we can still marvel at its scope.
chronis-yan 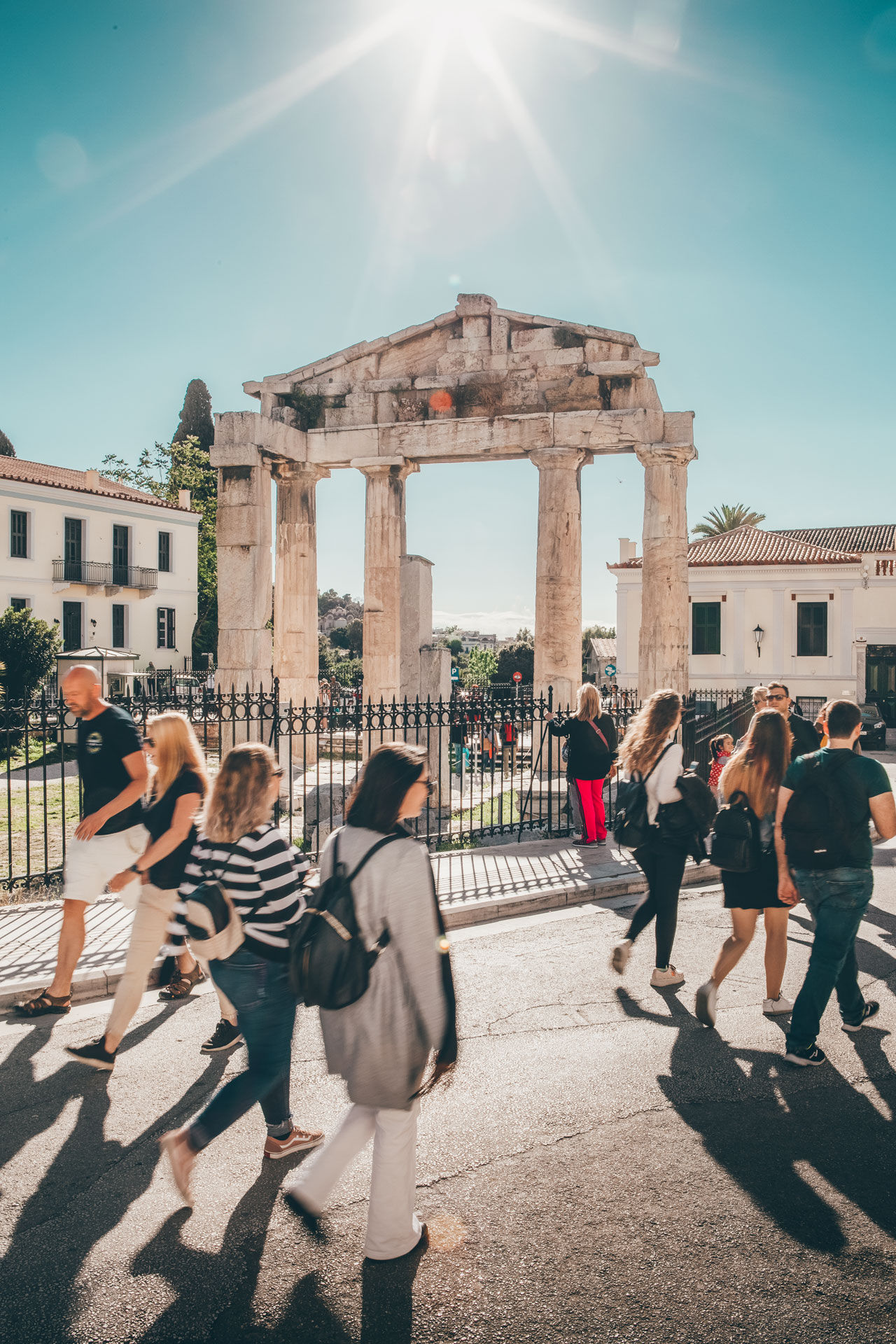 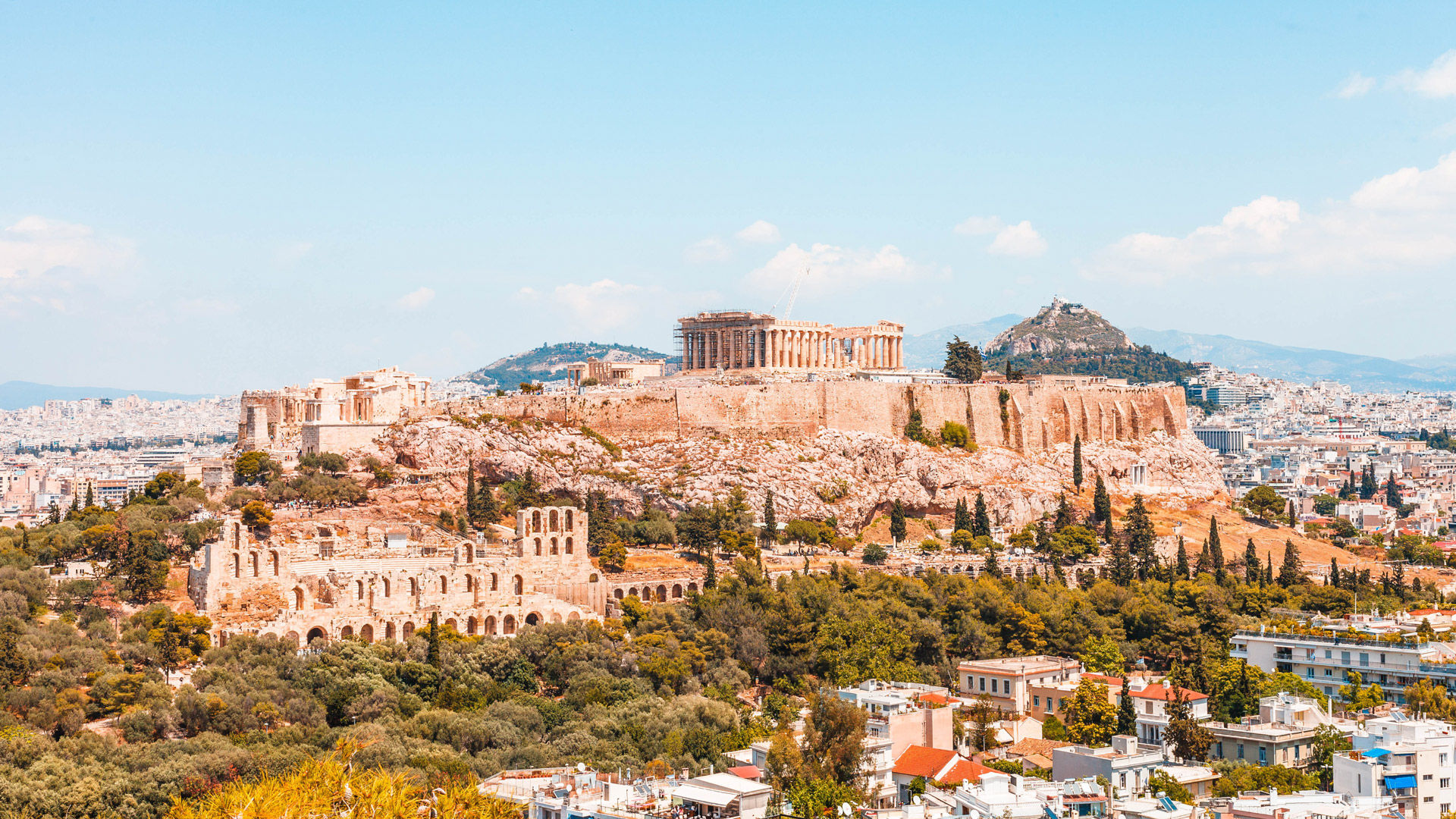 View of Acropolis and Odeon of Herodes Atticus
chronis-yan

No.1 in a list of Athens landmarks has to be the Acropolis. It’s the city’s Sacred Rock and the cultural trademark of Greece. In fact, little has changed as it was the standout Athens monument in ancient times, especially when with the Parthenon (dedicated to Athena, the goddess of wisdom and protector of the city) was added by Pericles in the 5th century BC. You’ll see the Acropolis from so many different vantage points on your walk, and each time you’ll marvel at how the marble changes shade at different times of the day. The Acropolis has witnessed every changing face of Athens since antiquity and she’s still there, a fitting monument to this great city and willing to share her story with everyone who wants to listen.

Added to the Acropolis complex by the wealthy Roman Herodes Atticus in the 2nd century AD, it’s impossible to contemplate just how many spectators this magnificent theatre has entertained over the years. The Odeon of Herodes Atticus is now the centrepiece venue of the annual Athens Festival, seating almost 5,000 people who never fail to be awed by the setting and exceptional acoustics. As you’re walking past this undisputed Athens landmark, consider that it was once completely enclosed by a wooden roof.

Before you continue around the Acropolis, along the pedestrianised Areopagitou St, take the time to walk up the hill just by it. You’ll be in good company. This is where every general and orator worth his salt in ancient Athens (Pericles, Aristides, Demosthenes, Themistocles…) came to address the Democratic Assembly, in an auditorium known as Pnyx. You can still see the speaker’s platform and seating terrace. Nearby is the monument dedicated to the 2nd-century Roman consul Gaius Julius Antiochus Epiphanes Filopappos, after whom the hill is named.

Carrying on beyond the Acropolis, you reach the Ancient Agora. Imagine the scene of Socrates or Aristotle regaling their followers, or even St Paul preaching to early Christians here in 49 AD. Next door is the Stoa of Attalos, named after King Attalos II of Pergamon who had it built as one of ancient Athens’ main marketplaces in the 2nd century BC. What you see is a remarkable reconstruction of the original building, including a fascinating mix of architectural influences, with external Doric columns and an interior Ionic colonnade. You can see where the stalls would have been and, if you feel like returning, it houses an interesting museum.

The Temple of Hephaestus – or just the Hephaisteion – was built in the 5th century BC (the height of Classical Athens) as a dedication to the god of fire and craftsmen and is perhaps the best-preserved ancient Greek temple. It’s a classic example of Dorian architecture by (amongst others) one of the architects of the Parthenon. And it’s surrounded by a beautiful park, so take your time to admire the columns and friezes and the sculptures depicting the labours of Hercules, the Battle of Theseus with the Pallentides and the Fall of Troy.

The Roman Agora was the centre of urban life in Athens during the Roman occupation of Greece. Originally, there was a Doric gateway that greeted citizens to the marketplace and, still with us, is the Tower of the Winds, an octagonal structure built in the 1st century by astronomer Andronicus that served as a sundial, weather vane and compass. Perhaps its most fascinating function, however, was as a water-powered clock. Nearby is Hadrian’s Library, which wasn’t so much a library as a civic forum in Roman times, with a pool and central courtyard surrounded by 100 columns.

This is the Roman Emperor Hadrian’s defining cultural legacy as far as Athens landmarks go: An 18m tall triumphal arch under the Acropolis. It was built in 132 AD to delineate ancient Athens from the new city, with an inscription on the northwest frieze reading, 'This is Athens, the Ancient city of Theseus', whilst the southeast frieze declares, 'This is the city of Hadrian, and not of Theseus'.

Again, we have Hadrian to thank for another of the standout Athens monuments – particularly as it had taken some seven centuries to build and still wasn’t finished when he arrived. But finish it he did, in 131 AD, with more than 100 Corinthian columns, a colossal statue of Zeus and (inevitably) an equally grand statue of himself. It was the city’s biggest temple and, although only 17 of the columns are still standing, we can still marvel at its scope.

Next up are a couple of more recent additions to historical Athens. Heading past Syntagma Square and on to Penepistimiou Avenue, you find a pair of buildings regarded as perhaps the finest 19th-century neoclassical designs ever created. The Academy of Athens and the National Library are two-thirds of the so-called Athens Trilogy of Danish-born architect Theophil Hansen. They are astonishing in their grandeur and detail – the Academy being a seat of serious scholarly study and the National Library once housing over two million tomes. Take a moment to admire the symmetry of the grand staircases of the National Library and the figures of Athena and Apollo on the pillars flanking the Academy, along with sculptures of the ever-pensive Plato and Socrates below.

Heading back past Syntagma and through the National Garden, you reach the horseshoe-shaped Panathenaic Stadium – or the Kallimarmaro, as it’s often referred to because of its tiered marble seating. Originally built in the 4th century BC to host the Panathenaic Games, it was restored for the first Modern Olympics, held in Greece in 1896, and is the epic finishing line for the annual Athens Marathon. It is said that a thousand animals were sacrificed in the arena during Hadrian’s inauguration.

Our walk around the finest Athens landmarks and monuments ends just to the south, in the serene and architecturally beautiful First Cemetery of Athens, containing the tombs or memorials of so many of Greece’s most notable politicians, statesmen, singers, artists and other historical figures. The Benaki family, archaeologist Heinrich Schliemann, architect Ernst Ziller, Nobel Laureate Giorgos Seferis, revolutionary hero Theodoros Kolokotronis are all buried here. And the list goes on. The marble tombs and mausoleums are so intricate - with Romantic, Neoclassical and Renaissance depictions - that it’s more like an open-air museum than a cemetery. Look out for the Sleeping Maiden, the scenes from Troy on Schliemann’s tomb and the statue of Kolokotronis.

We’ve envisaged this tour of the standout Athens landmarks and monuments starting at the Acropolis metro station and taking you along Areopagitou Street (by the Acropolis) and into the Anafiotika and Plaka districts, before heading towards central Athens and then back around to the Panathenaic Stadium and First Cemetery. Of course, you can visit these ancient Greek monuments in any order, depending on where you’re staying, and there are other cultural sites that can be added.

How do I get to the Acropolis in Athens?

When is the best time to visit Athens?

How much does it cost to visit the must-see Athens monuments?

How long does it take to walk around the best Athens landmarks? 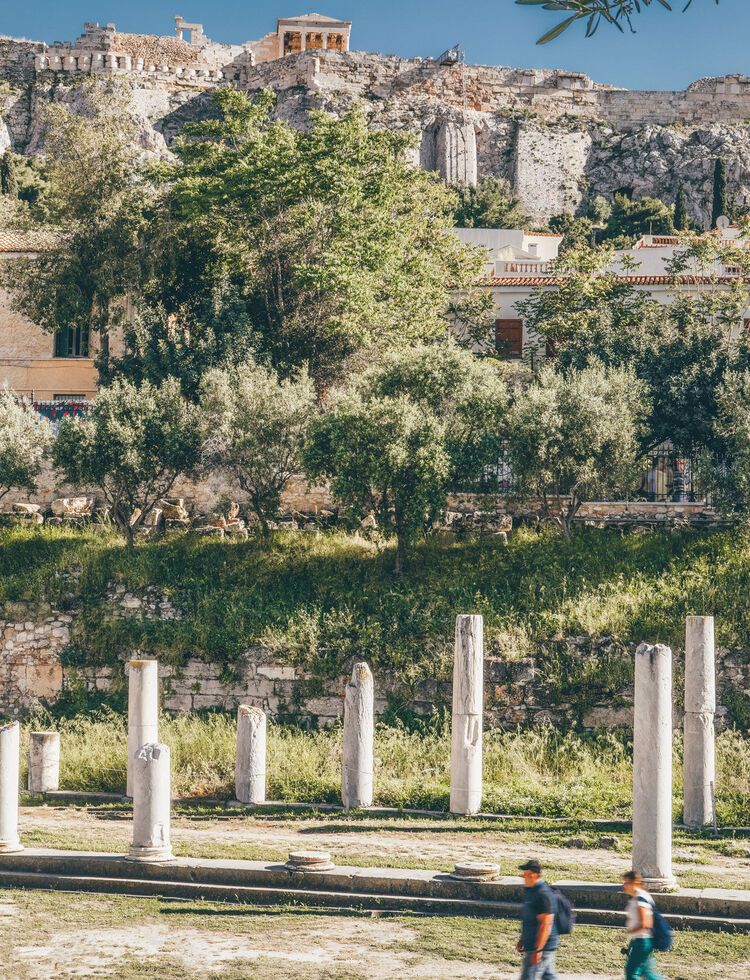 Keep the streets as clean as possible by using the bins provided or, if necessary, keeping your rubbish with you until you find one.
Use a refillable water bottle to try to minimise your use of plastic.
Respect the cultural monuments and relics.
Respect the plants and animals.
Do your best to support small, independent family-owned stores and local producers, taking home something handmade and local.
Be inquisitive and definitely ask the locals for tips.
Read More Read Less
DESTINATION