Visiting the UNESCO World Heritage Site of Delphi is to travel to the very core of mythical and spiritual ancient Greece and – according to legend – the centre of the world. 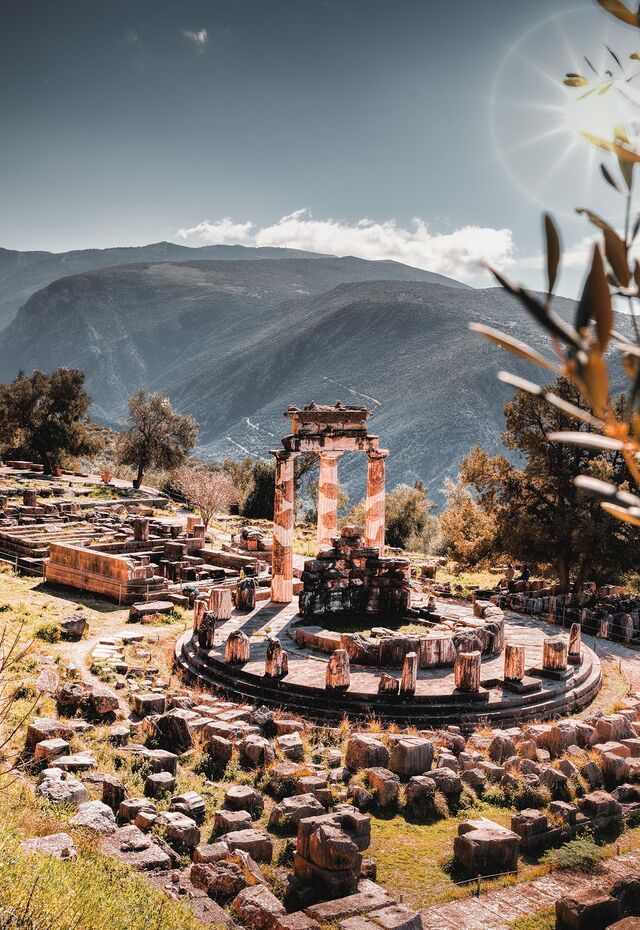 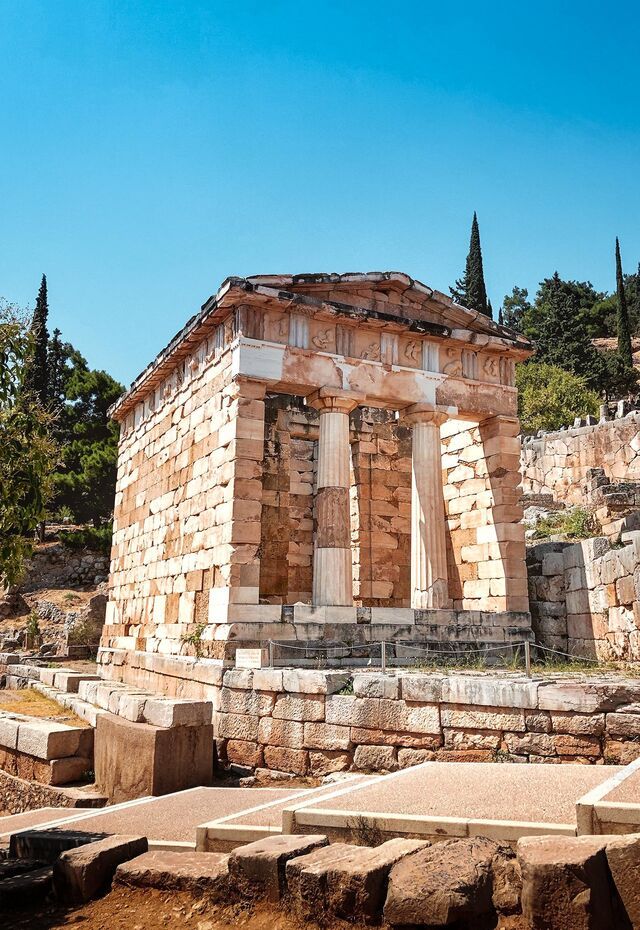 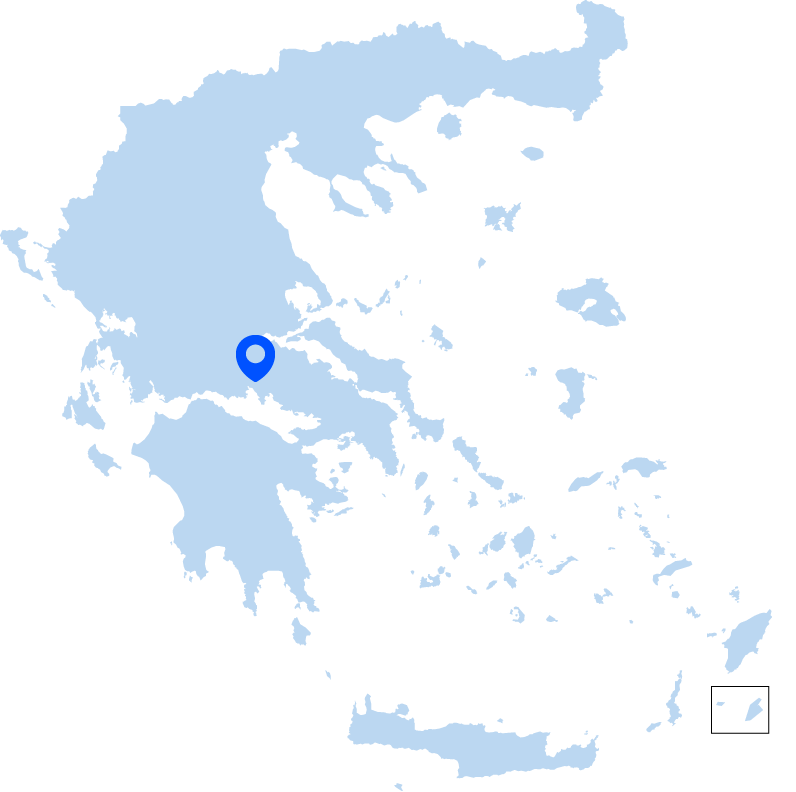 View on map
Duration
3 - 4 hrs
Season
All year round

Legend has it that Zeus released two eagles, one from the east and one from the west, and where they met – at Delphi – was the Navel of the Earth. Indeed, the religious site that subsequently developed here, from the 6th century BC to Roman times, was considered the most important of the ancient world, attracting everyone from leaders to commoners to consult its famous Oracle on matters of war and state to absolution from their sins.

Two-and-a-half millennia later, it is astonishing to think that Delphi is still attracting an international audience, this time as a UNESCO World Heritage Site a little over 2hrs from Athens.

Your first impression will be that Zeus’ eagles clearly had a great eye for a location. On the slopes of Mt Parnassos and with sweeping views across the Pleistos Valley all the way to the sea, the setting was clearly part of the effect. Just the view would have been intoxicating – before the prophecies of Apollo (the god to whom the sanctuary was dedicated) were relayed through the famously vague but none-the-less inspiring utterings of the soothsayer Pythia.

But you’ll learn that there’s much more to Delphi than its Oracle. As the sanctuary grew in stature, so it accumulated wealth. Victorious Athenian, Spartan, Macedonian and other leaders would return with offerings of statues and monuments, which were all housed on the site. And so too were artistic and sporting events held here, including the four-yearly Panhellenic and Pythian Games (second only to the Olympic Games). 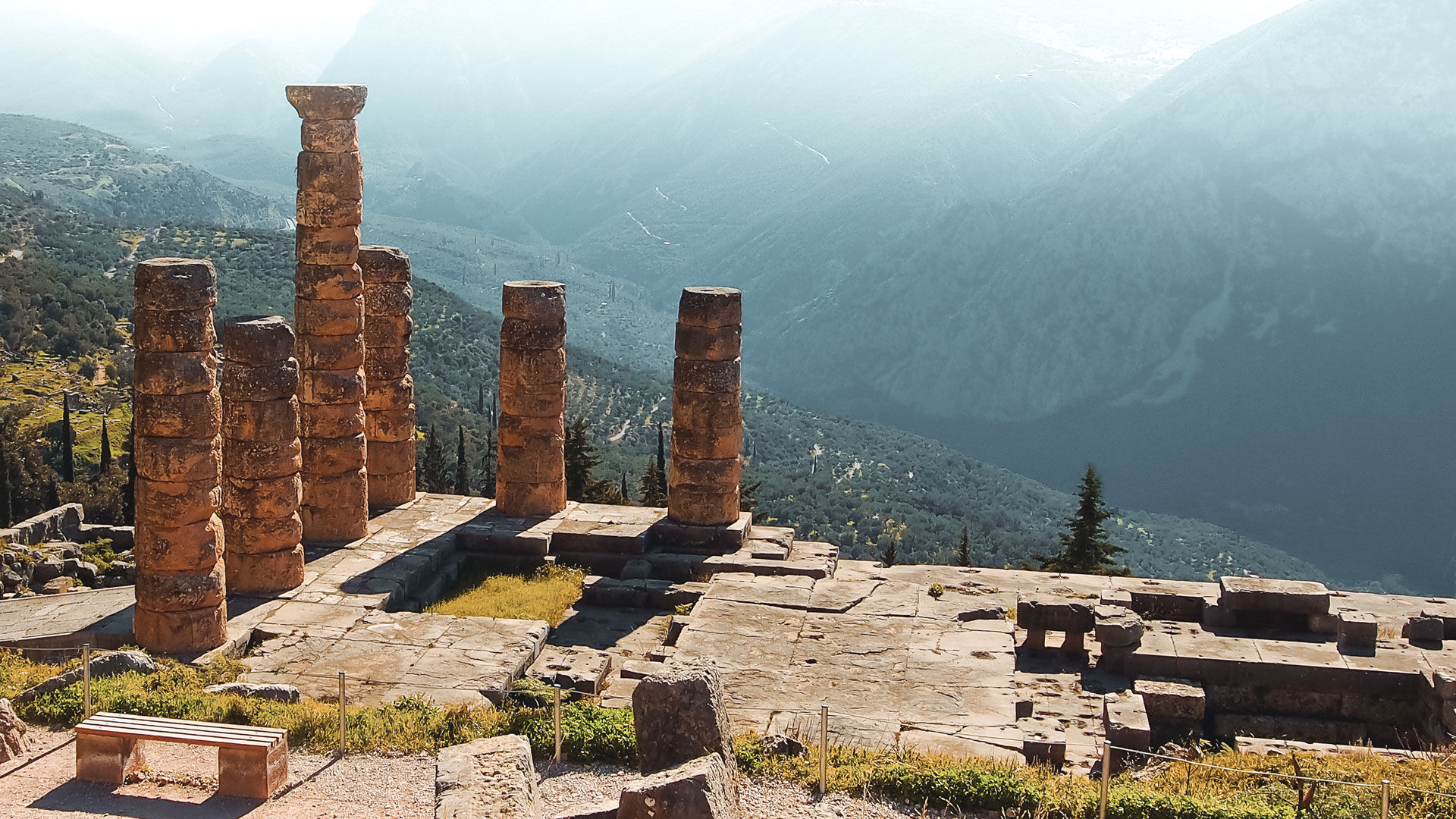 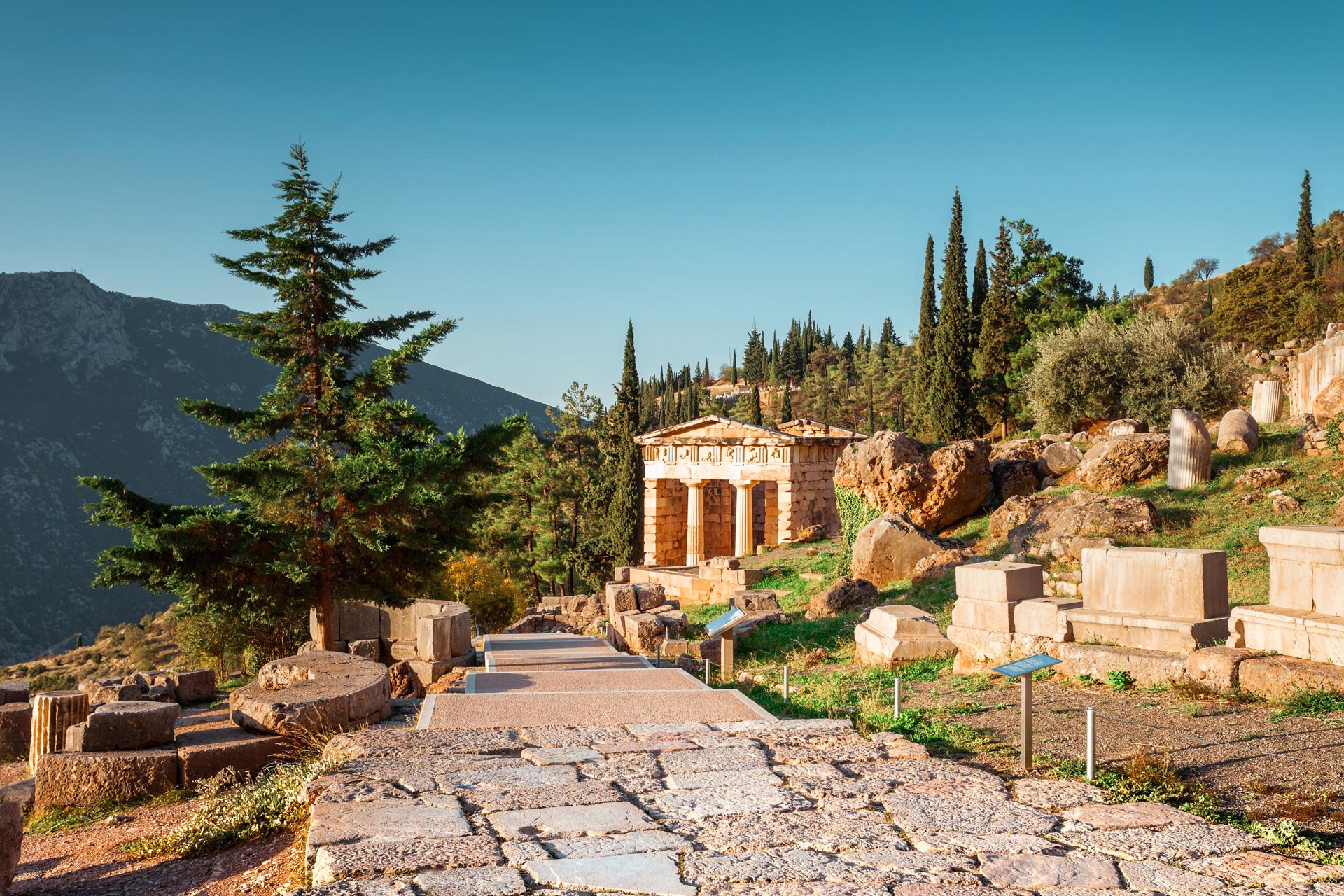 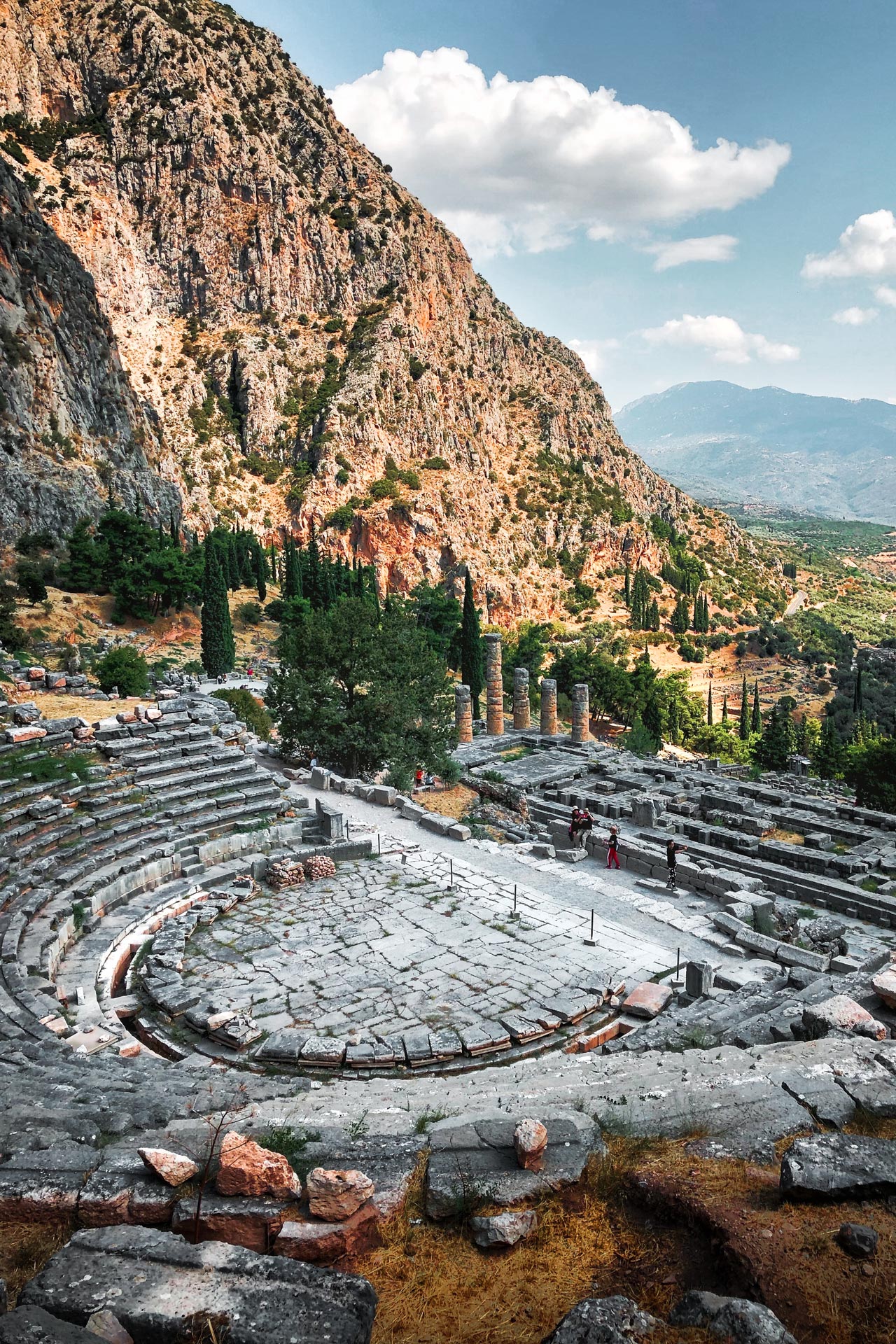 Originally built in the 4th century BC, Delphi’s theatre was the artistic home of the sanctuary 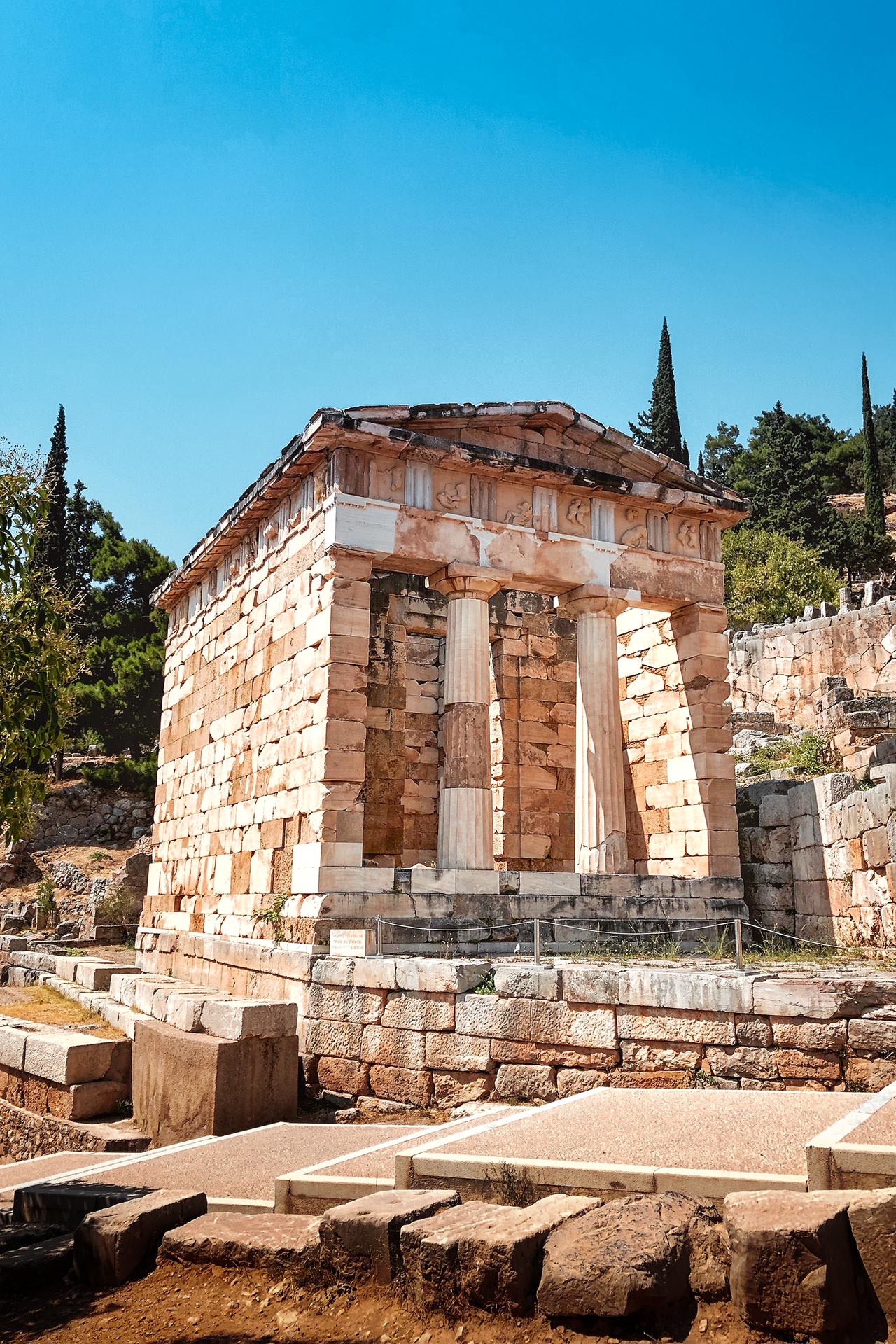 The Athenian Treasury, the best preserved of the treasuries, containing the monuments and gifts of victorious city states 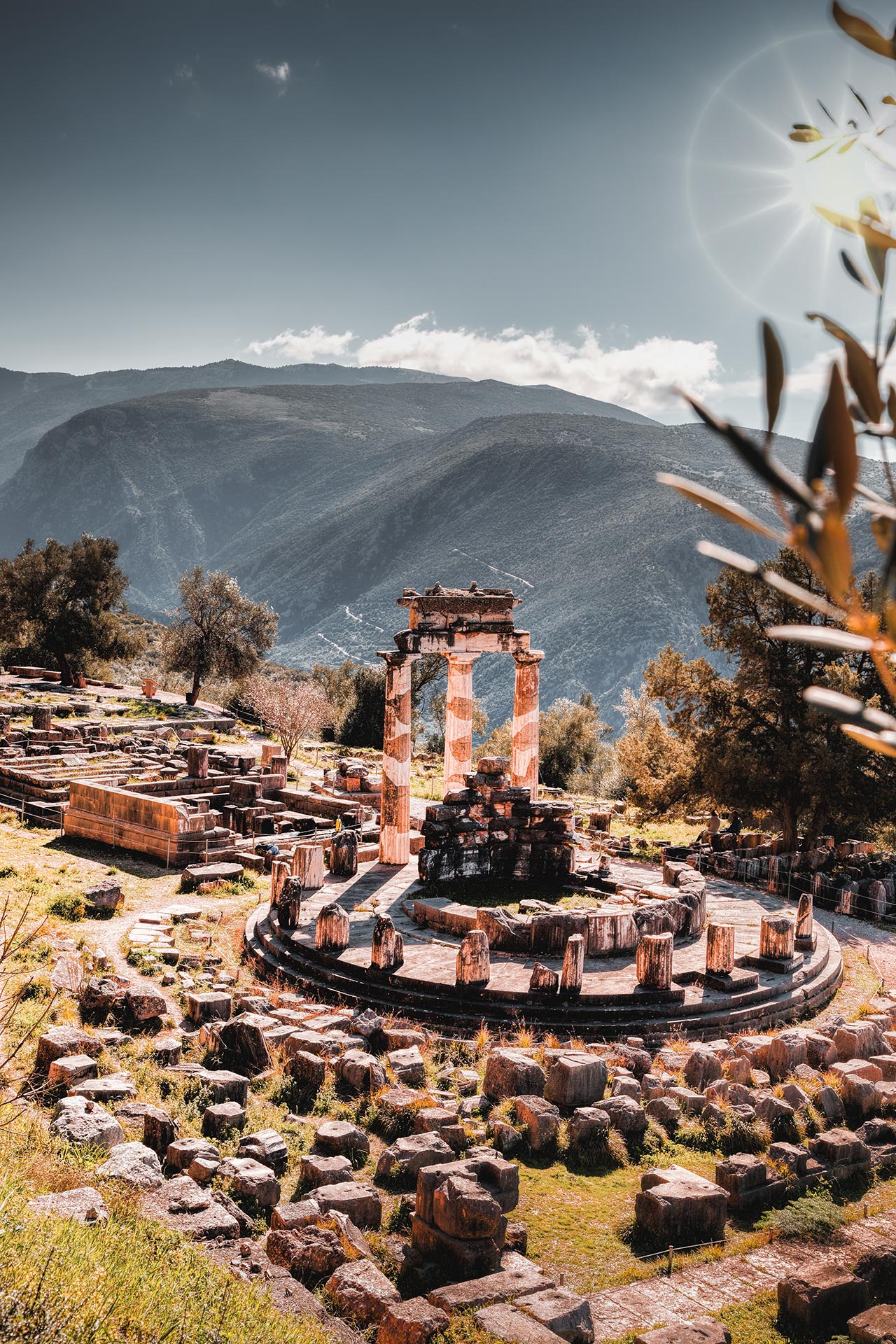 A circular building from the 4th century BC, the Tholos is where visitors offered a sacrifice to the Athena Pronaia 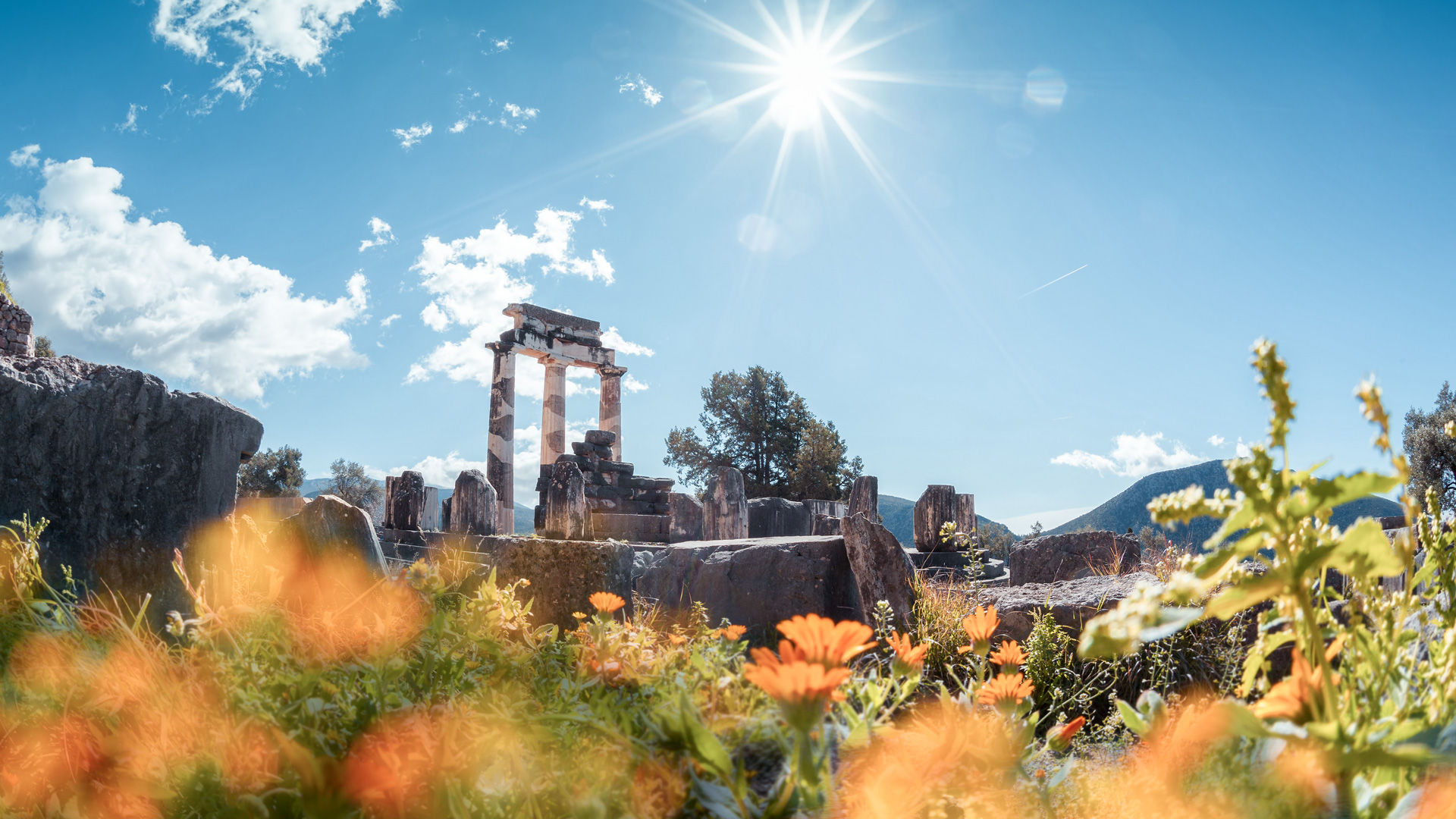 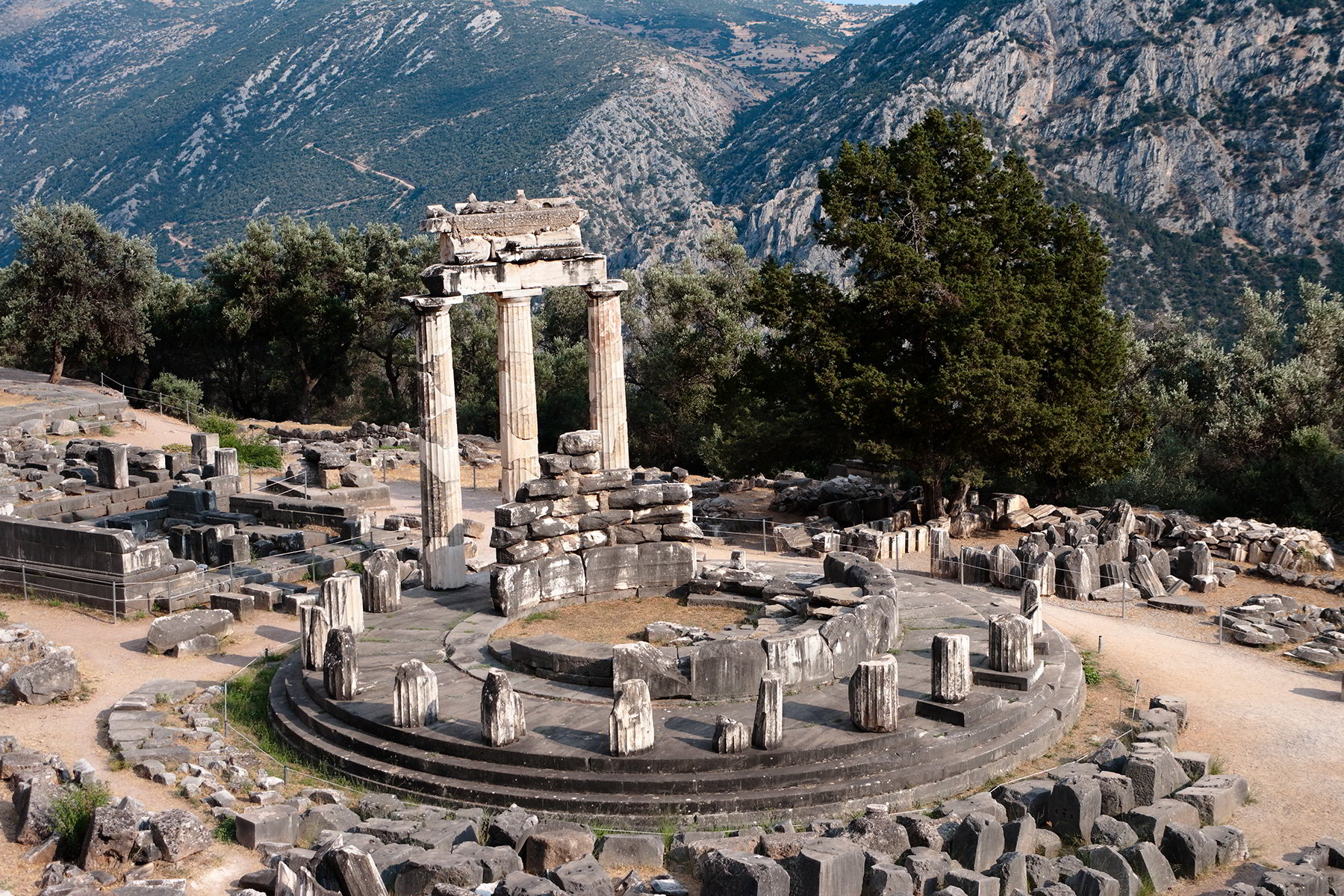 The Oracle of Delphi 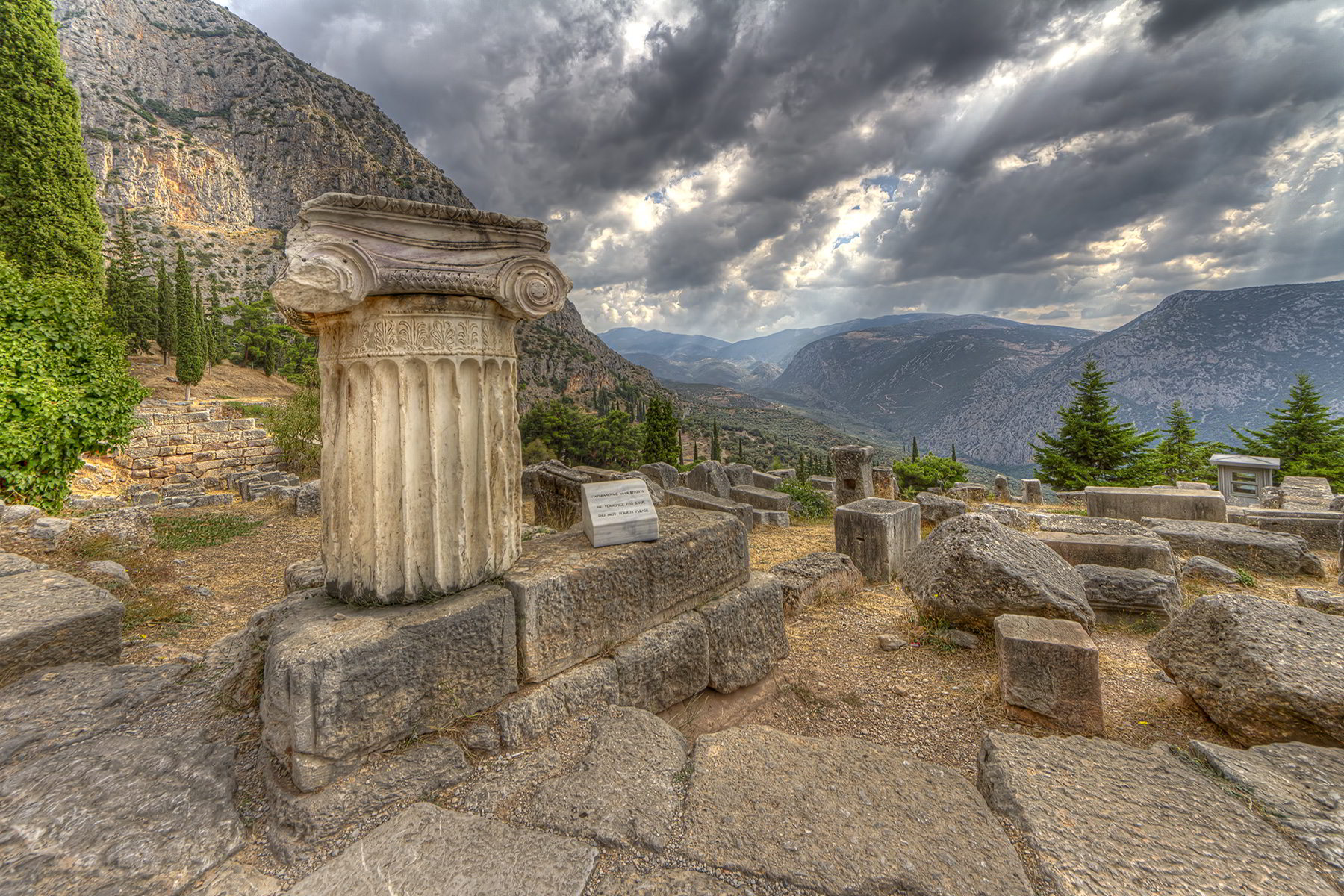 A view from the mountain in Delphi 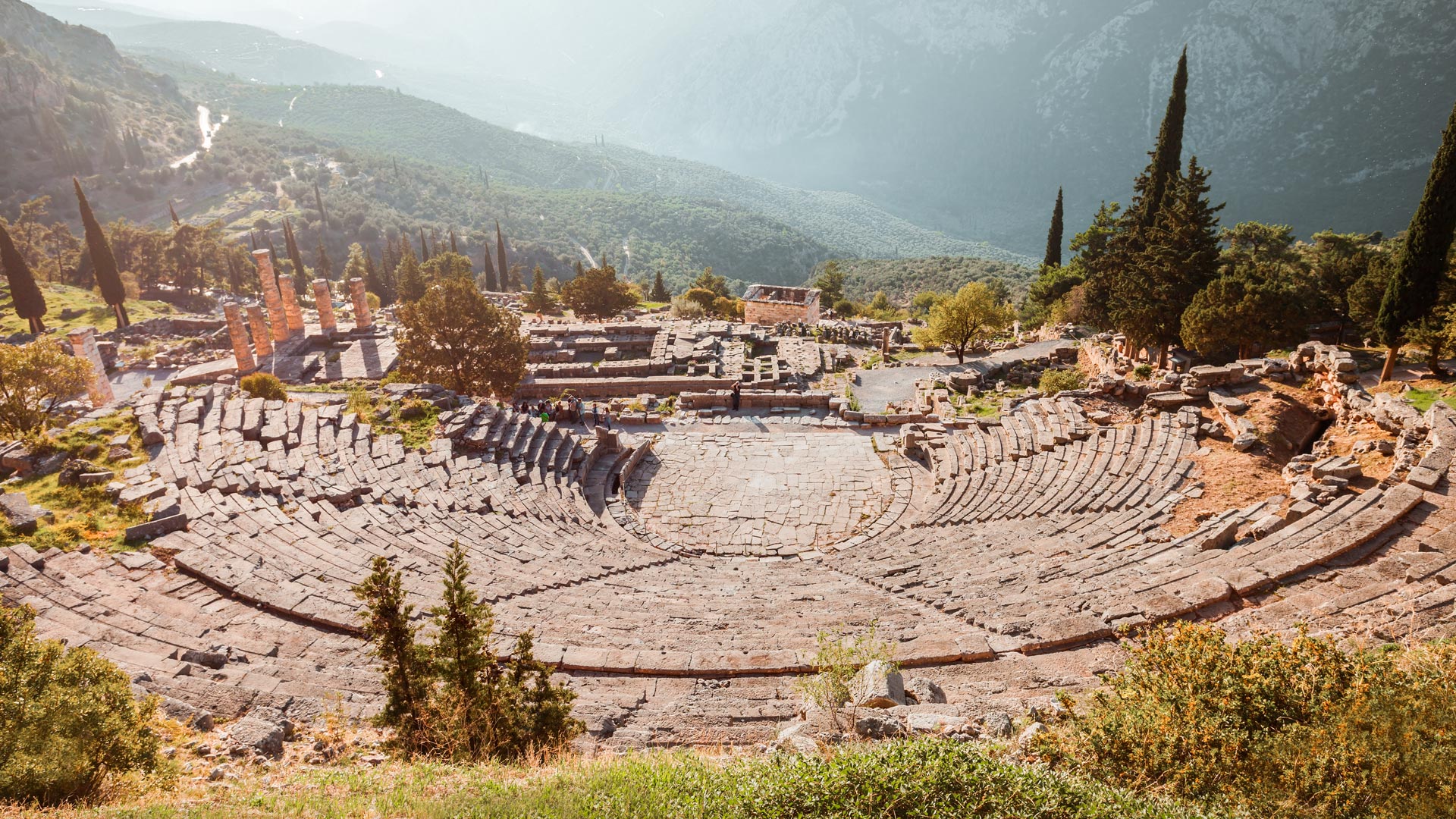 Located above the Temple of Apollo, the Ancient Theatre looks over the entire sanctuary and a valley of olive trees

The best-preserved of the treasuries containing the monuments and gifts of victorious city states, this is one of the most impressive buildings on the site. Other treasuries existed (Argos, Siphnian, Boeotian…), but it is the partially reconstructed Athenian Treasury that allows us to understand their function in displaying the gifts.

The Temple of Apollo

It doesn’t matter that only six broken Doric columns remain of Delphi’s most important structure. This is where Pythia delivered the prophecies of Apollo. The ruins we see today are from the 4th century BC, but the temple was built on the remains of earlier temples, dating from the 7th century BC.

The Tholos of Athena Pronaia

Every pilgrimage to Delphi began here. A circular building from the 4th century BC, the Tholos is where visitors offered a sacrifice to Athena Pronaia, considered the guardian of Pythia, before moving on to the Temple of Apollo around 800m away. It originally consisted of 20 Doric columns arranged around 10 Corinthian columns.

Originally built in the 4th century BC, Delphi’s theatre was the artistic home of the sanctuary. Located above the Temple of Apollo, it looks over the entire site and a valley of olive trees. After several upgrades, including one after the visit of the emperor Nero in 67 AD, it seated up to 5,000 people. It is still used to stage plays today.

Moving along the Sacred Way above the theatre, you reach the stadium that, after several renovations, could seat around 6,500 spectators. The Panhellenic and later the Pythian Games were held here every four years, as well as music festivals.

The sacred spring of Delphi is where travellers bathed after the long journey to the sanctuary. If you were here to compete in an athletic event, you might just wash your hair whereas murderers seeking absolution would bathe their entire bodies.

You should definitely set aside a good amount of time to explore the 14 rooms of Delphi’s Archaeological Museum. Artefacts recovered from the site include the beautifully preserved bronze Statue of the Charioteer, the Large Sphynx of Naxos, two man-sized Kouroi and the frieze of the Siphnian Treasury.

Group
Ancient Footpath Delphi Hiking is a historic and inspiring hike that combines beautiful nature with the mystery of ancient temples!
Private
Enjoy a private bespoke trip to Delphi and discover the hidden gems of the most spectacular location of any classical site in Greece, and is...
Private
Delphi, the mythical oracle of ancient Greece and UNESCO World Heritage site, is set amidst a formidable mountain landscape, where old rural traditions and forgotten...
EXPLORE ALL

The best experience is in spring when the olive groves and wildflowers are in bloom and in autumn, when a morning haze often adds to the magical aura.

About 3-4 hours are needed to cover the site and archaeological museum. 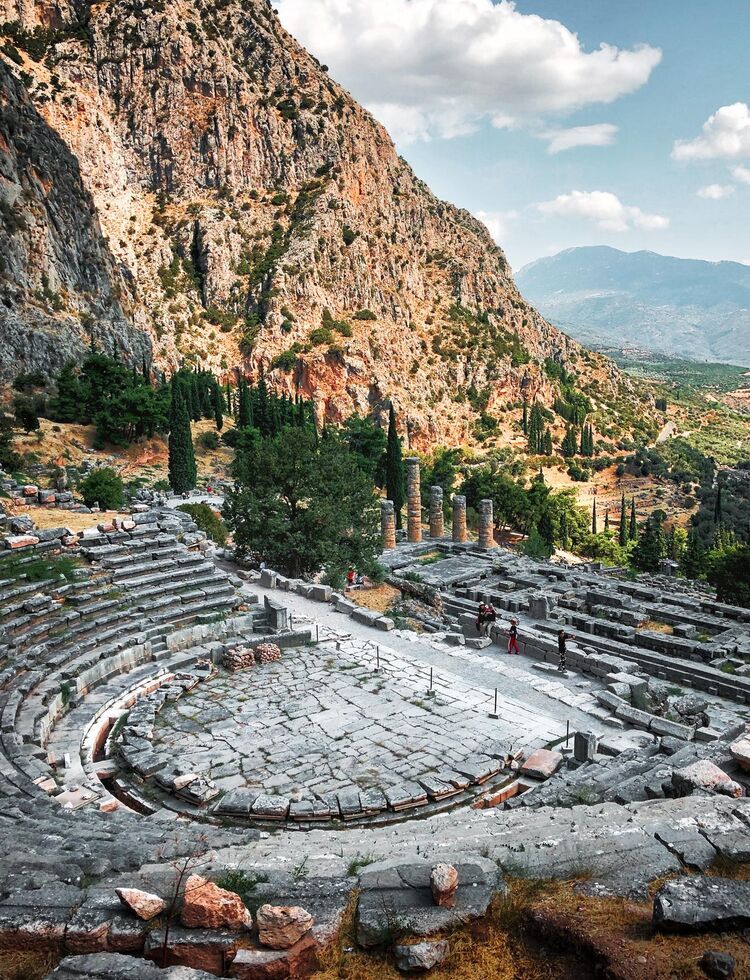 Refrain from touching any remains or monuments. The fingers’ natural oils can be extremely damaging to artefacts.
Stay on the marked paths and respect your fellow visitors.
Use the bins provided or, if need be, take your rubbish with you.
If there’s a “No flash photography” sign, please respect it. It’s to protect the monuments.
Use a refillable water bottle to try to minimise your use of plastic.
No pets (other than guide dogs) are allowed in cultural sites.
Smoking is prohibited.
Read More Read Less

EXPERIENCE
Exploring the beauty of Lake Kremaston by kayak