An island monument at the centre of the Cyclades 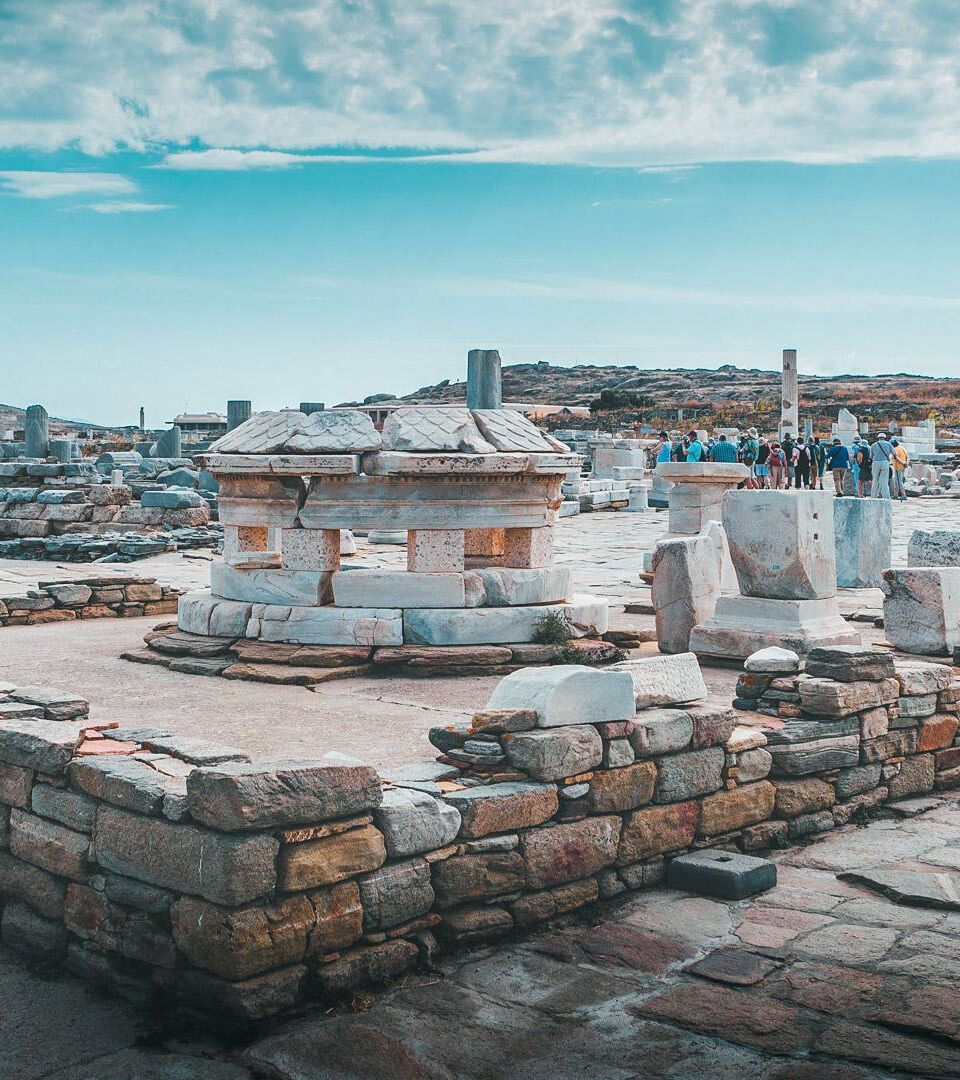 Today
15°
SUN
15°
MON
14°
TUE
14°
WED
15°
A fascinating day-trip from neighbouring Mykonos, the island of Delos is the birthplace of Apollo and a key piece of Europe’s cultural heritage. The entire island is an outdoors museum.

It’s not hard to see why the Ancient Greeks believed that Delos, a small island opposite Mykonos, is where the god Apollo was born. The summer sun reflects off the marble and stones strewn across the island, just as it did in antiquity when it symbolised the light of inquiry, reason and harmony.

It was a light that was seen to radiate throughout Greece, making Delos the centre of an archipelago of islands arranged – as if magically – in a circle around it. Hence the name of Greece’s most famous island group, the Cyclades, of which Delos lies at the centre.

What to do on Delos island

Take a pilgrimage to the core of Greek civilisation

As you stand in the centre of historic Delos, you know how the ancients once felt about their sanctuary. Spread out around you are the island’s legendary monuments: the House of the Naxians, Temple of Artemis, Pythion, House of Dionysos and the ancient Theatre, housing the Delians and Temple of Isis.

There’s the Terrace of the Lions, with five of the marble lions that guarded the Sacred Palm that Leto, Apollo’s mother, held onto when she gave birth to the god of light. You are at the heart of the ancient cosmos.

Admire the temple dedicated to the goddess of sailors

Within the Temple of Isis, you’ll find the statue of the goddess of sailors, and one of the most significant attractions on Delos. The site stands out among temples to other foreign gods and can be found in the foothills of Mt Kynthos.

Discover the Theatre, once seating 5,000 spectators

Originally made of wood, Delos’ Theatre was replaced by the stone structure seen today, dating to the third century BC. It could hold 5,000 spectators and the entire area has archaeological remains, including private dwellings from the time of Cleopatra and Dioscorides.

Complete your tour at the Archaeological Museum of Delos

One of the world’s finest collections of ancient Greek sculpture awaits at the Archaeological Museum of Delos. Since its inauguration in 1904, it has been among the most important museums in Greece. Its nine rooms house sculptures, mosaics, pottery, inscriptions, jewellery, a funerary statuary and gravestones. Look for the torso of the Archaic kouros from the Sanctuary of Apollo, the statues of Dioskourides and Cleopatra, as well as Boreas, abducting the nymph Oreithia.

Take a tour of Delos island, the birthplace of Apollo

Follow in the footsteps of the ancients up Mt Kythnos

The climb up Mt Kythnos – at just 133m, the highest point on this small, flat island – takes a mere 20 minutes. Steps carved by the ancients will lead you to the often blustery top, where you can see the other Cyclades islands that circle Delos.

Learn about Apollo’s birth on the invisible island

As mythology tells us, before the birth of Apollo, Delos was an invisible rock floating in the Aegean. The goddess Leto, pregnant by Zeus, was desperate to find a place to give birth but no one would take her in, fearing the wrath of Hera, Zeus’ jealous wife. Seeing her distress, Zeus sought help from his brother, Poseidon, the sea god, and asked him to anchor the invisible islet for Leto’s sake.

Poseidon obliged, tied it to the deep and named it Delos, “visible”. Leto then leaned back against the slope of Mt Kythnos, holding onto the island’s single palm tree, and gave birth to her son, the god of light.

Pop over to Rhenia isle on your way back to Mykonos

Very close to Delos and Mykonos, this 14 km2 island has a width of only 1km and is known for its many bays, inlets and deserted sandy beaches. There are five chapels and farmsteads scattered across the island. The chapel of Agia Triada overlooks a particularly stunning sandy beach.

Experience the best of Delos 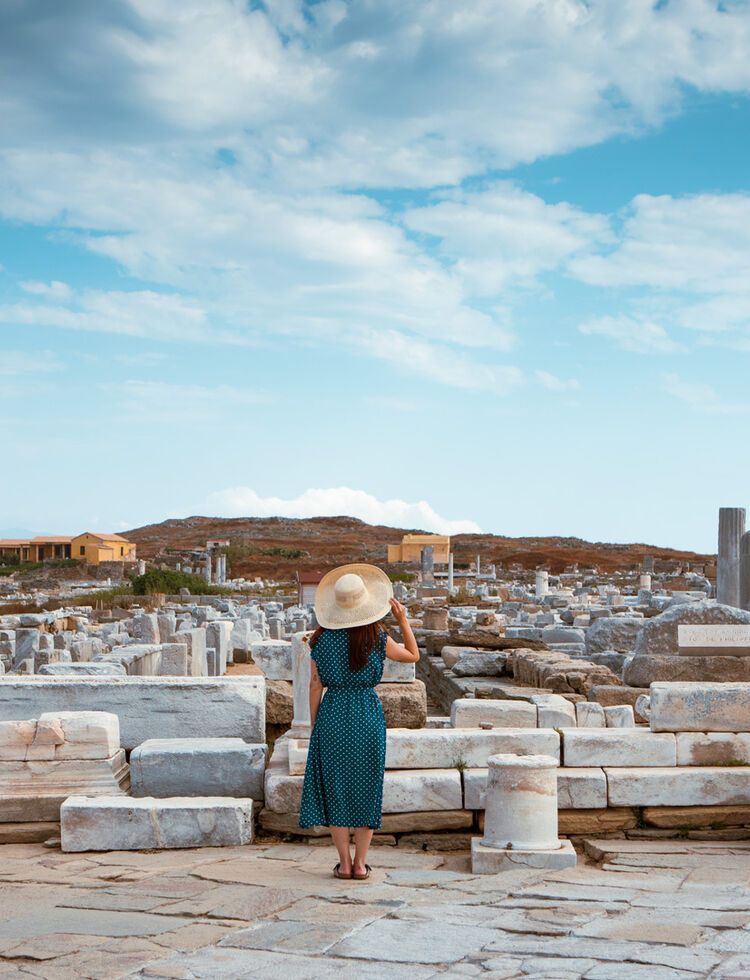 12 unforgettable things to do in Mykonos

With world-famous beaches, an iconic main town, pulsating nightlife and intimate hidden coves… welcome to all the unmissable things to do on your holidays in Mykonos 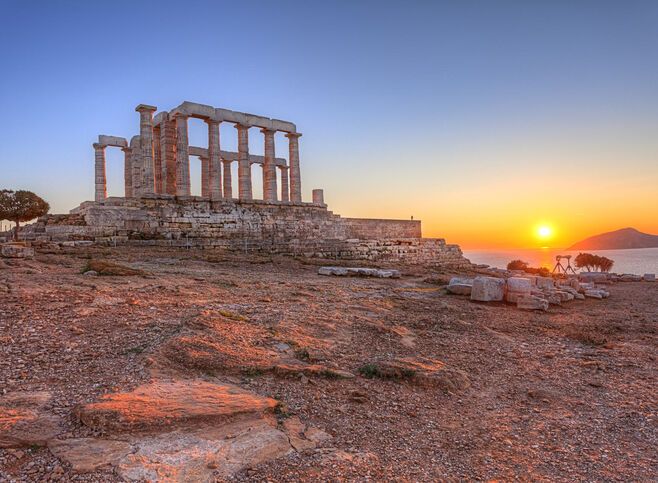 Sun, sea and culture in Greece

All the pleasures of the beach combined with the chance to visit historic treasures, enhanced by the legendary Greek sunlight
SEE ALL
DESTINATION