From Minoan palaces to flower-power beaches 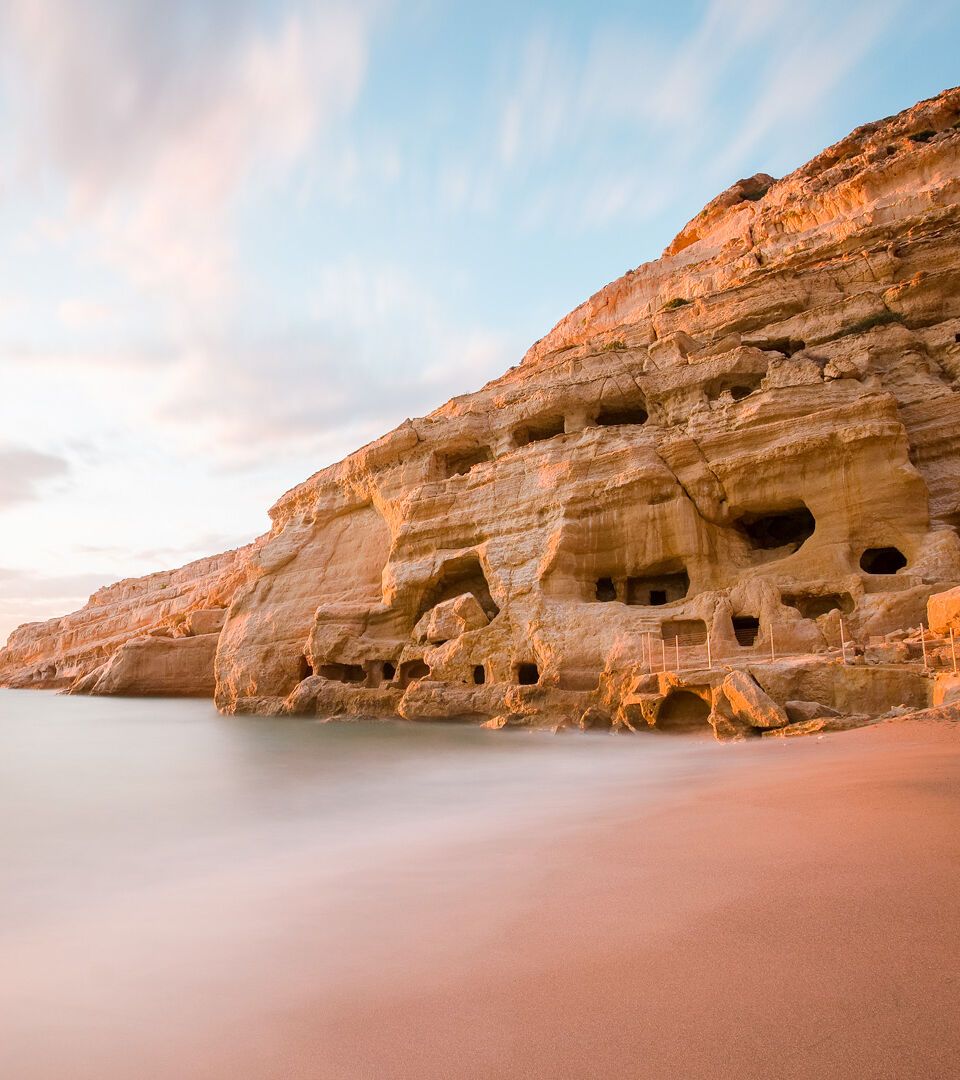 The archaeological sites of Phaistos, Agia Triada Estate and Kommos constitute some of the most important Minoan settlements on Crete. They date from the dawn of civilisation in Europe, drawing you back to a time when myth and history were indistinguishable.

Then you pop back to the recent past with a visit to Matala, another gem in Crete’s Heraklion prefecture, with its famous carved caves and lovely beach. Here, you’ll find the afterglow of the sixties when hippies put this once tiny fishing village on the map and gave it a place in modern cultural history.

What to do in Phaistos & Matala, Crete

Discover the Palace of Phaistos and return to Minoan times

The Palace of Phaistos is situated on a hill overlooking the fertile valley of Kato Messara, bounded by Mt Psiloritis (the tallest mountain in Crete) and Mt Asterousia. According to mythology, the dynasty of Rhadamanthus, son of Zeus and brother of King Minos, ruled here. Indeed, Phaistos was one of the most important centres of the Minoan civilisation and the richest and most powerful in southern Crete.

Phaistos began to flourish at the beginning of the Bronze Age, in the mid-3rd millennium BC. The first palace was built around 1900 BC and the whole complex covered some 18,000m2, just a little bit smaller than the Palace of Knossos.

After a great earthquake around 1700 BC destroyed both palaces, a new and even more imposing palace was raised in its place and most of the reconstructed buildings you’ll see belong to this second palace. Excavations have revealed sections of the first palace as well as a temple to the Great Mother Rhea from the early Archaic Period.

Learn about the Phaistos Disc, still hiding its secrets

The Minoans don’t give up their secrets easily and the Phaistos Disc is a perfect example. It was discovered in 1908 and has been puzzled over by dozens of leading international linguists, archaeologists and cryptographers without being deciphered. It is thought to date from the 17th century BC and you’ll see it in the Heraklion Archaeological Museum, one of the most significant museums not just in Crete but all of Greece.

Enjoy the sea caves and hippie vibe of Matala beach

The flower children who made holidays in Matala famous worldwide return here in the summers for the Matala Beach Festival, held in this gorgeous sandy beach with the carved caves. The history of this area of Crete goes much further back, of course. Matala was originally the port of Phaistos and then of Gortyna until the early Byzantine period. It is not known for certain who carved the caves out of the soft stone but people clearly lived in them from prehistoric times right up to the early Christian era. Nowadays, these vestiges of a bygone era are neighbours to a thriving holiday village full of hotels, cafes, bars, restaurants and shops.

Very close by are the beaches of Kokkini Ammo (Red Sand) and Kommos, which is known as a nesting site for the loggerhead turtle. You can swim in wonderfully clean and deep waters and enjoy a range of sea sports. And don’t miss out on the sunset at Livykos, just behind Paximadia, the two small islands within the Mesaras Gulf.

On the banks of the Geropotamos River, not far from Phaistos, is one of the most beautiful spots in Crete. You’ll find a royal estate or small Minoan palace of Agia Triada here. Built around 1600 BC, it is a major Minoan monument where troves of artefacts have come to light. Archaeologists debate whether it was the summer home of the kings of Phaistos or used while the main palace was being rebuilt following the destruction of the original.

The archaic port of Kommos

The archaeological site of Kommos lies above the huge beach of the same name. It was the port of the palaces at Phaistos and Agia Triada from 1650 to 1250 BC. Archaeologists have found the ancient seaside village and many public buildings that were probably storerooms or boathouses that protected the Minoan fleet from the elements.

Located in the middle of a wild and arid landscape, the Odigitria-Agiofarango Monastery is one of the oldest monasteries in Crete. It is surrounded by a high wall, with a fortress tower – known as the Tower of Xopatera. From the monastery, head for Agiofarango Gorge and a fantastic stroll within wild beauty.

Descending into the gorge, you’ll get to the church of Agios Antonio, which once represented a centre of asceticism for the many hermits who came here and after whom the gorge is named. A little further down is the cave of Goumenospilios.

Matala is a village on the south coast of the Heraklion region of Crete. It is a popular summer destination, known for its sandy beach with artificial caves carved into the rock above the beach believed to be from Neolithic times.

You can drive or take the bus to Matala, which is around 75km south of Heraklion town. Heraklion has an airport with international and domestic flights (around 45mins from Athens and 1.5hrs from Thessaloniki) and a port with daily ferries from Piraeus (around 8.5hrs and seasonally from islands in the Cyclades and Dodecanese.

Phaistos was an important Bronze Age settlement from the 3rd millennium BC). It was one of the richest in Crete, with the Palace of Phaistos (from around 1900 BC) rivalling Knossos Palace for size and importance in the Minoan Civilisation. The palace is most famous for the discovery of the Phaistos Disc, a 15cm clay-fired disc with stamped symbols that have yet to be deciphered and are believed to be some of the oldest writing in Europe. It is displayed in the Archaeological Museum of Heraklion.

You can comfortably swim in the sea in Crete from mid-May till the end of October, but every season is special in Crete, with spring and autumn especially popular for outdoor activities. The temperatures can vary by 5-10 degrees from coastal to mountainous regions throughout the year. Crete does get busy in the peak summer months (July and August), so it is best to visit in May-June or September-October if possible.

Experience the best of Phaistos - Matala 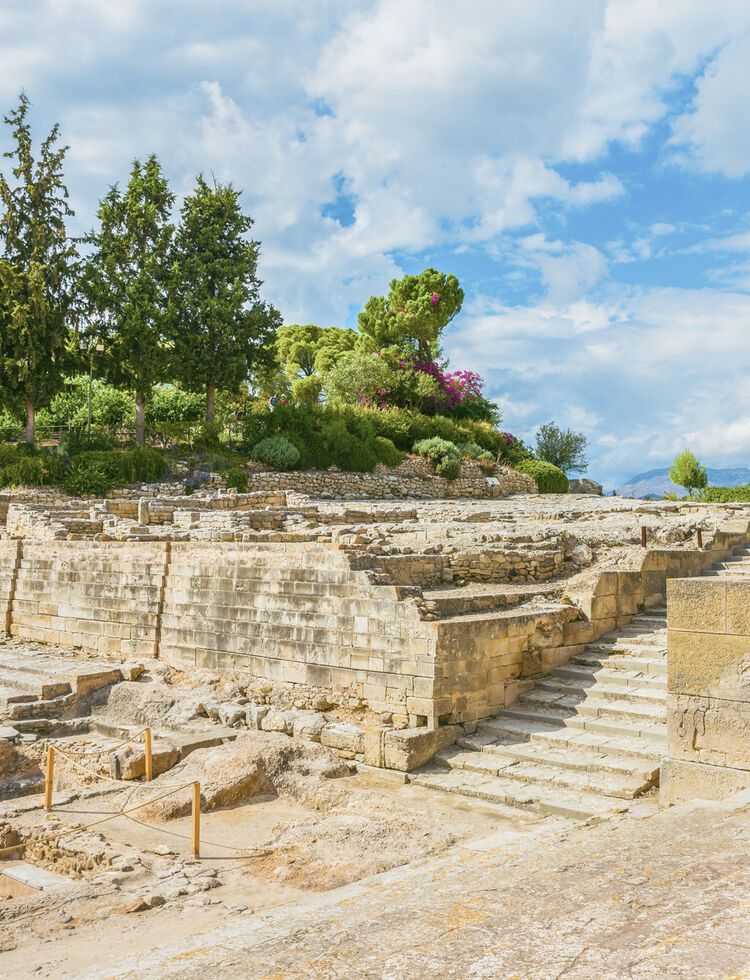 Explore the Minoan Palace of Phaistos in Crete