Built on a slope under the gaze of a Byzantine castle, Skyros’ small but lively main town has been happily holding on to its island ways whilst the rest of the world seems to have looked the other way. 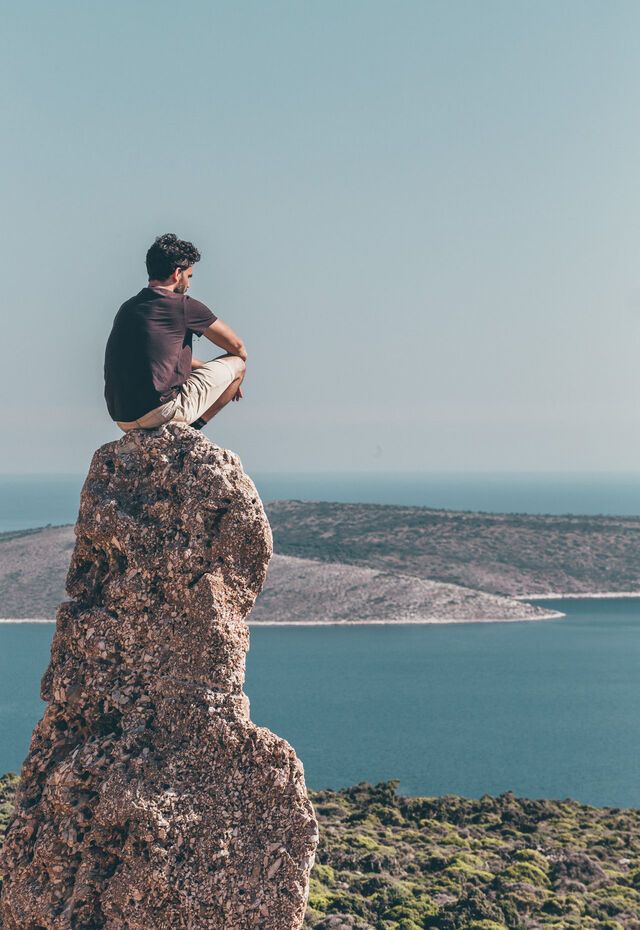 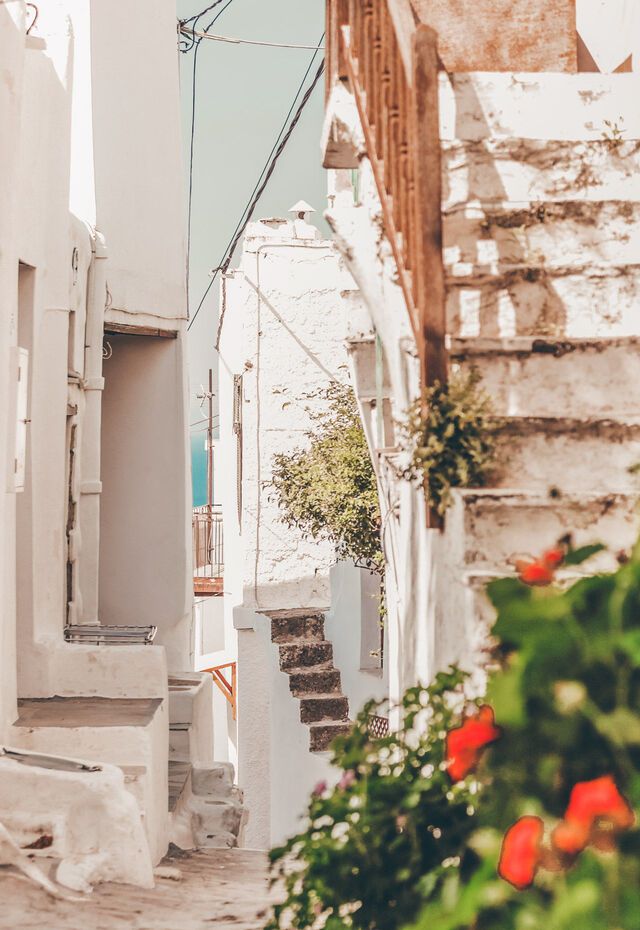 It is said that, on hearing of the prophecy that her son would die in the Trojan War, Achilles’ mother dressed her son as a girl and sent him to live with King Lycomedes’ daughters on Skyros. Clearly, she felt that no one was going to look for him on this little-noticed island opposite Evia.

Not much has changed for Skyros, which remains as off-radar as ever. But therein lies its strength. The greatest compliment that can be made to its main town (which gathers most of the island’s life) is that it has barely changed in decades.

Perhaps this is because, to reach Skyros, you must first travel to Kimi, in eastern Evia, and from there take a 1hr40mins ferry ride. But it’s also just a 40mins plane trip from Athens.

Crowned by a Venetian castle, the main town’s sugar-cube houses tumble down the mountainside, giving it a picture-perfect Cycladic appearance – although Skyros is nowhere near the Cyclades and closer inspection reveals none of the finesse of that island group. Instead, the assortment of restaurants, bars, boutiques and other shops in town have a more down-to-earth feel. That, though, doesn’t stop them emitting an energy that can be felt all year round.

You’ll find traditions such as wood-carving and pottery alive in many shops. Just as the island’s honey is supplied by local beekeepers, the cheeses (feta, graviera and sour yogurt-like xinotyri) from dairy farmers, and the excellent goat and lamb in the tavernas is from Skyrian shepherds. For the island’s seafood speciality, order lobster spaghetti – ‘astakomakaronada’ – a literal tongue-twister). Don’t worry about how much you eat… you’ll burn it off with a walk up to the hill-top castle. 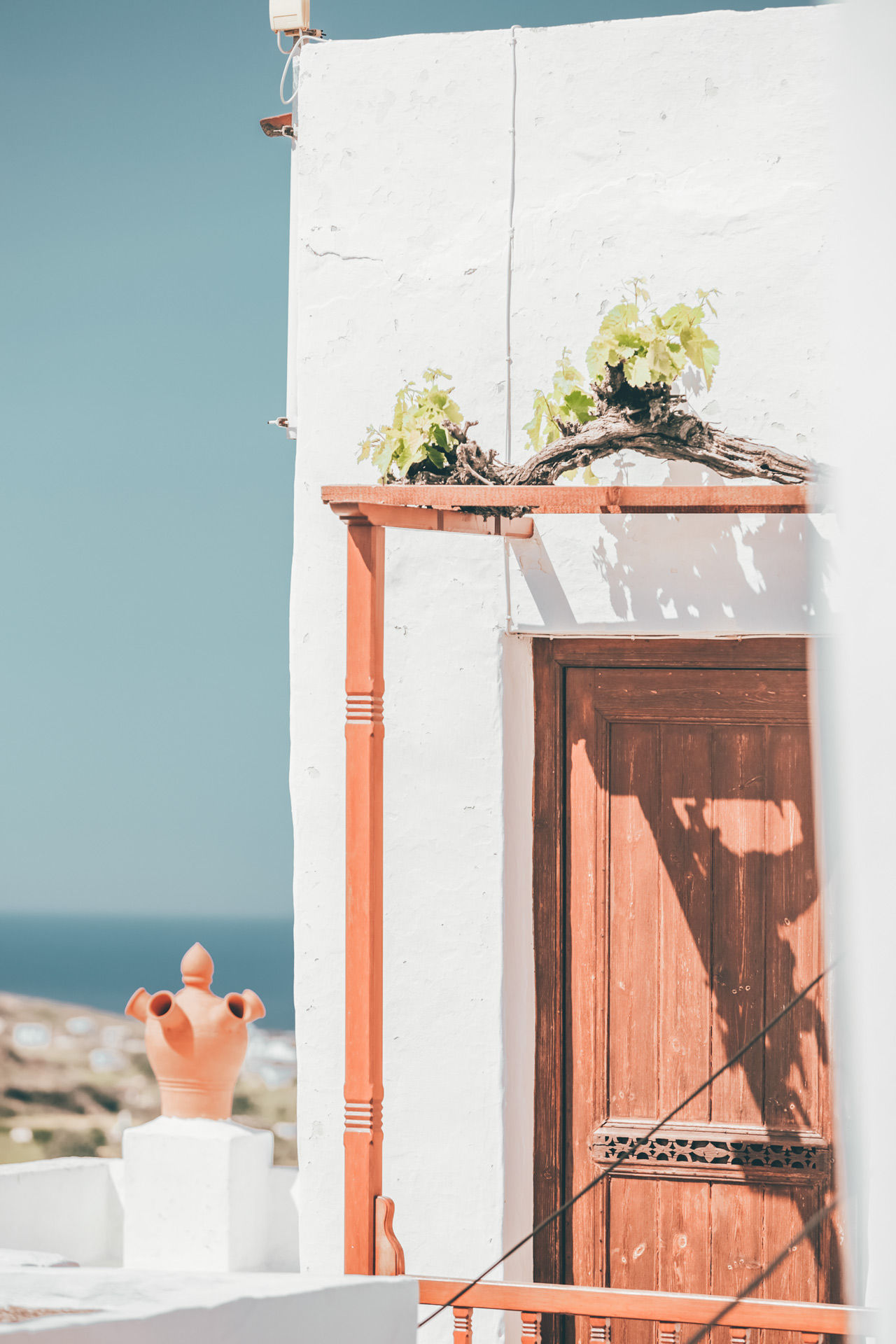 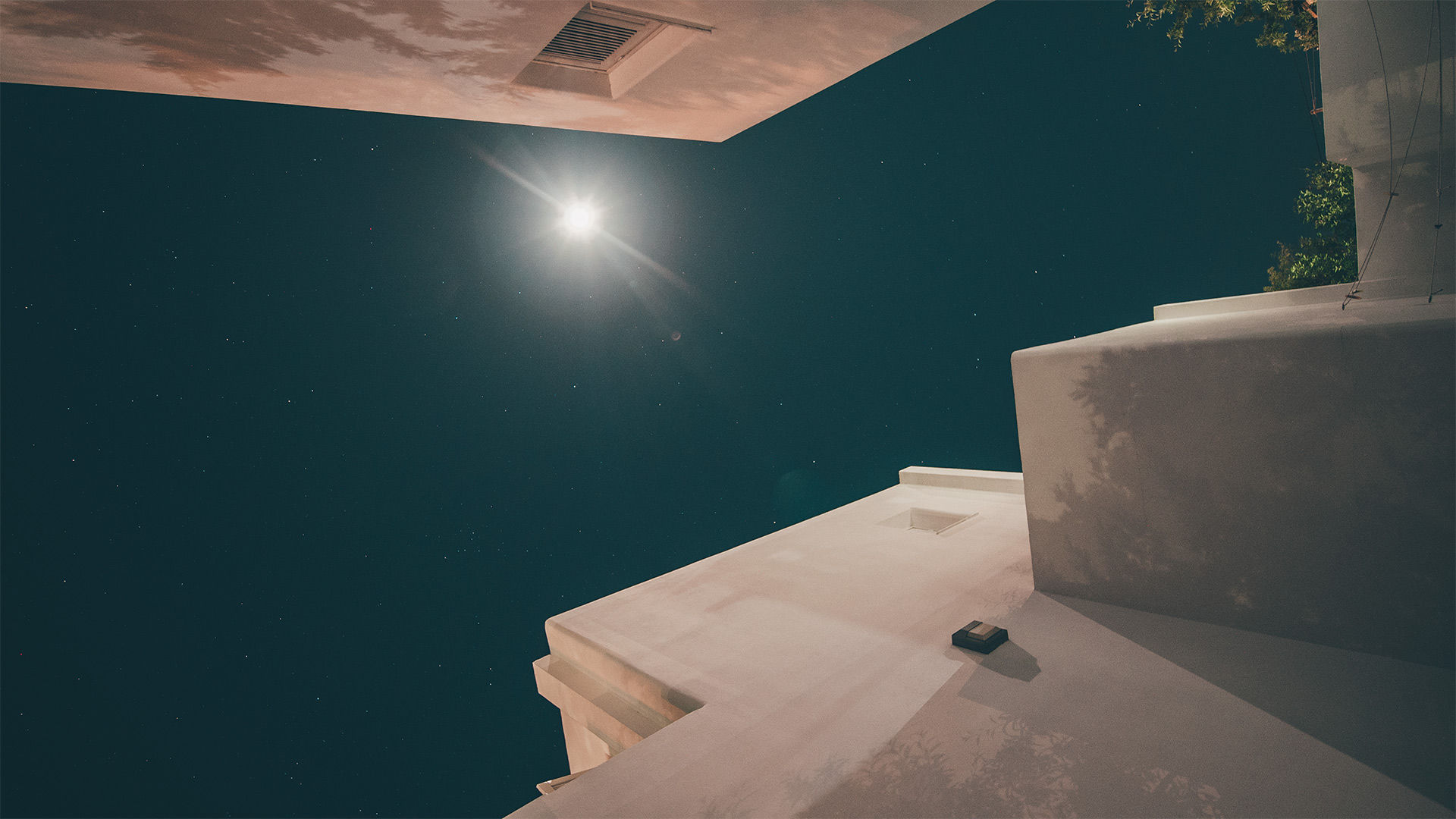 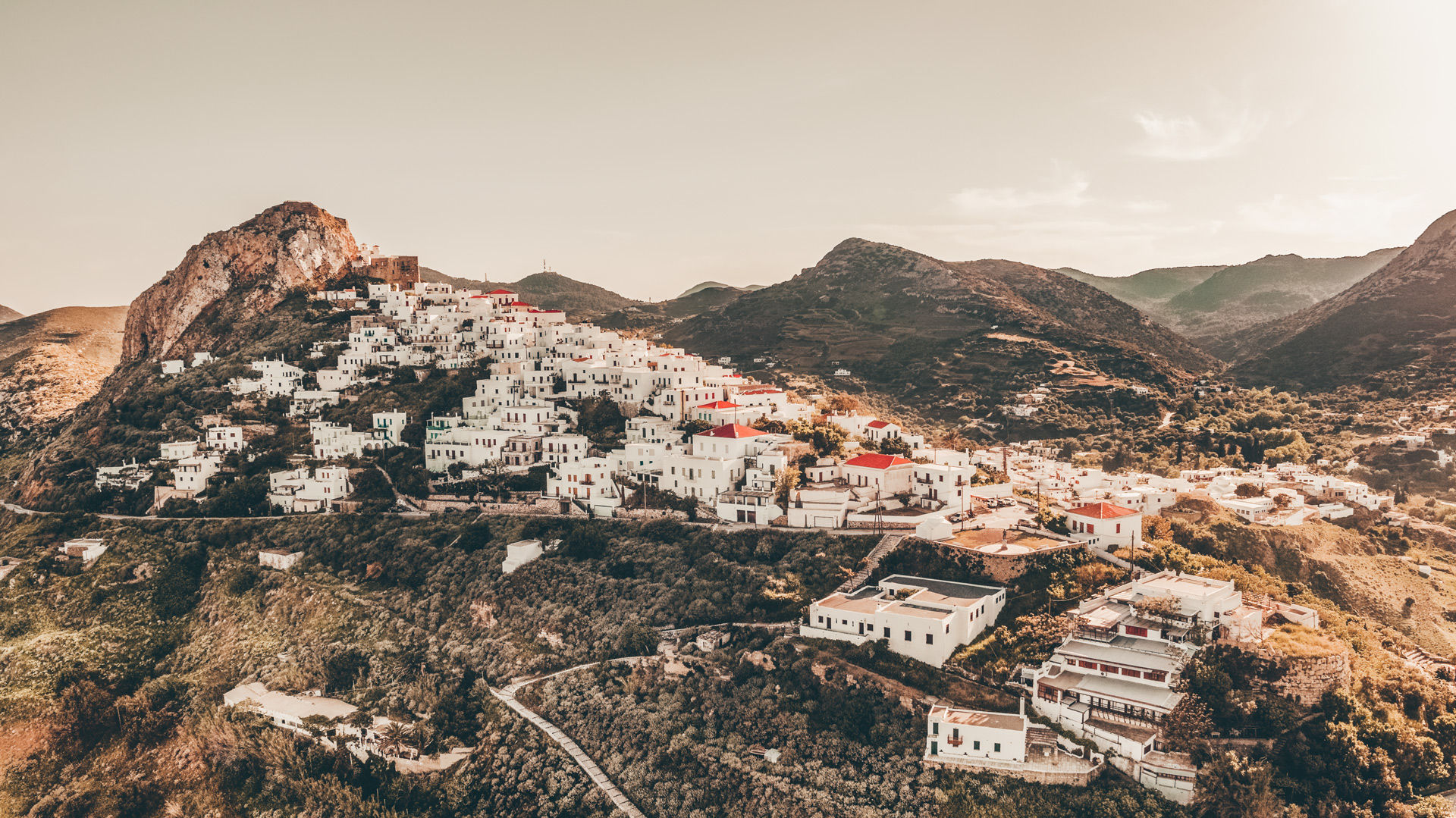 Crowned by a Venetian castle, the main town’s sugar-cube houses sprawl down the mountainside 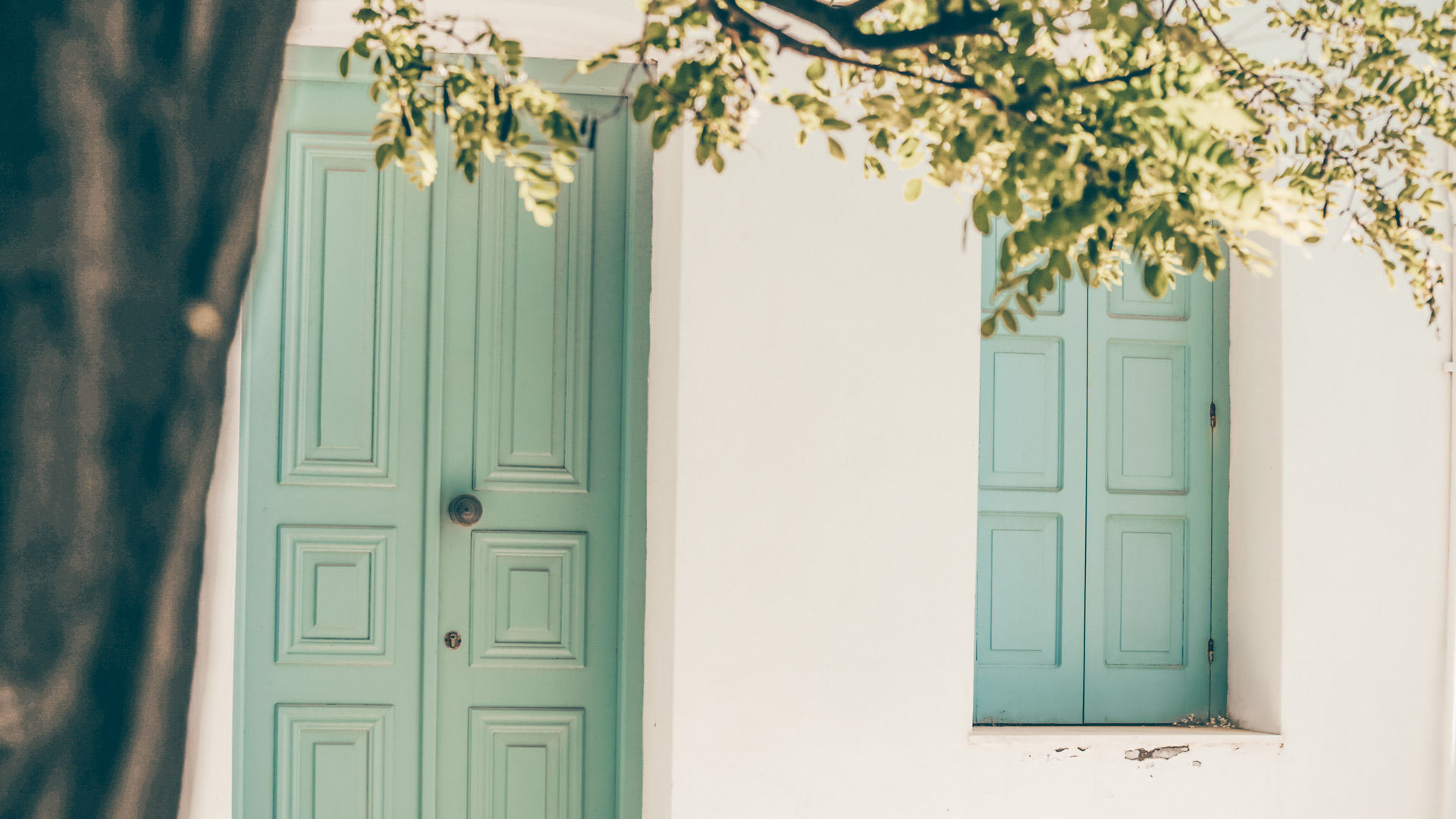 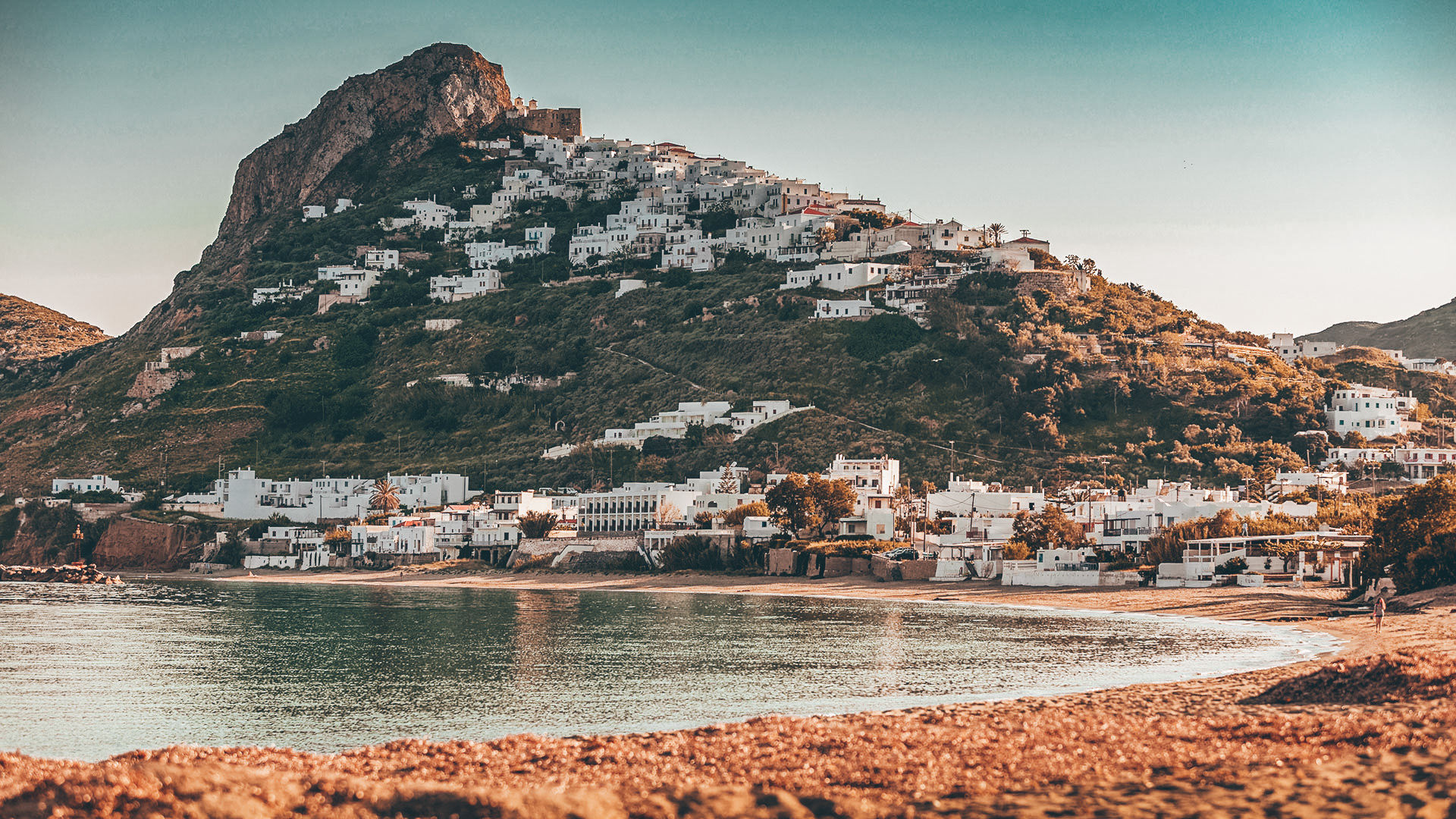 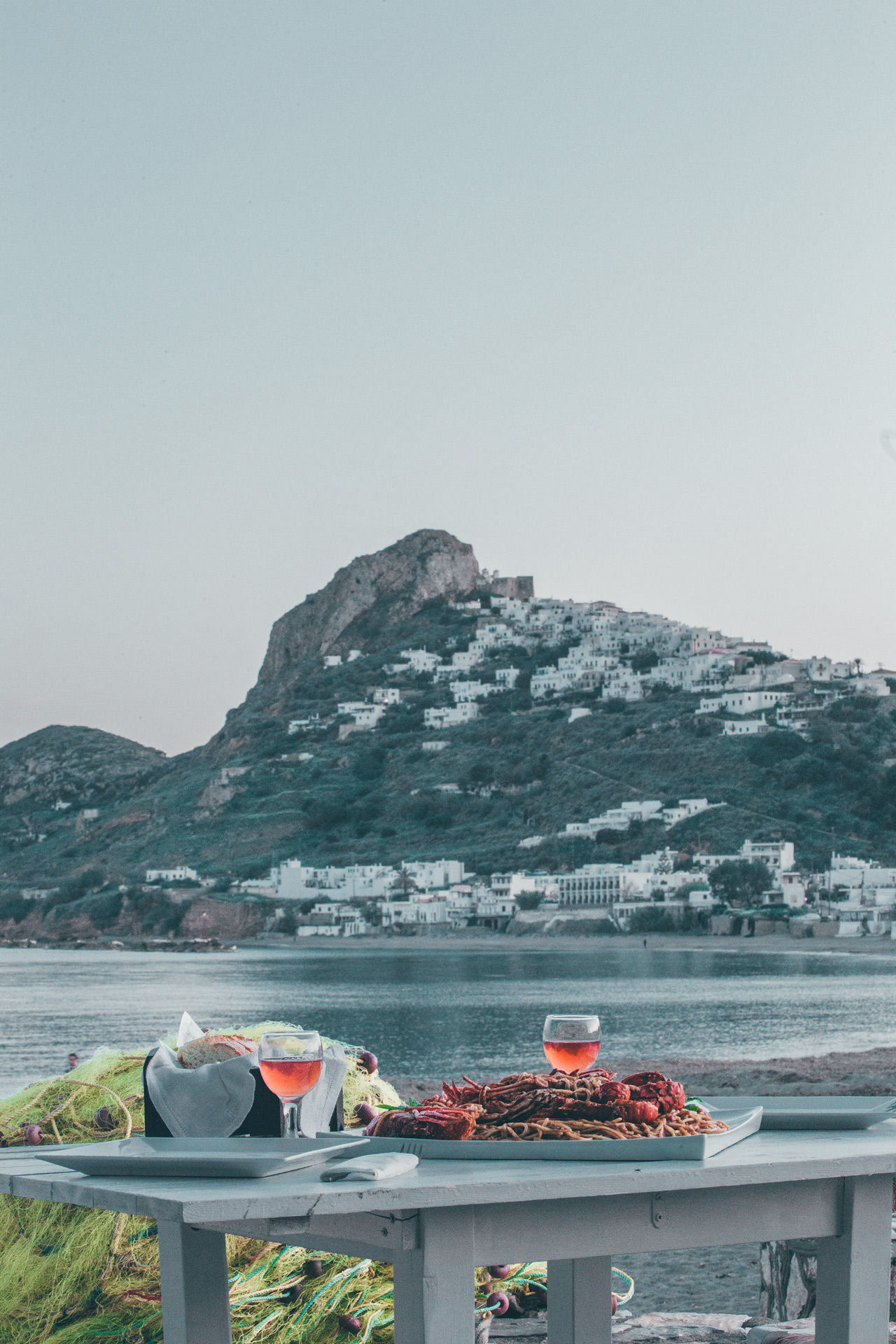 Skyros has been famous for its plentiful lobsters since antiquity 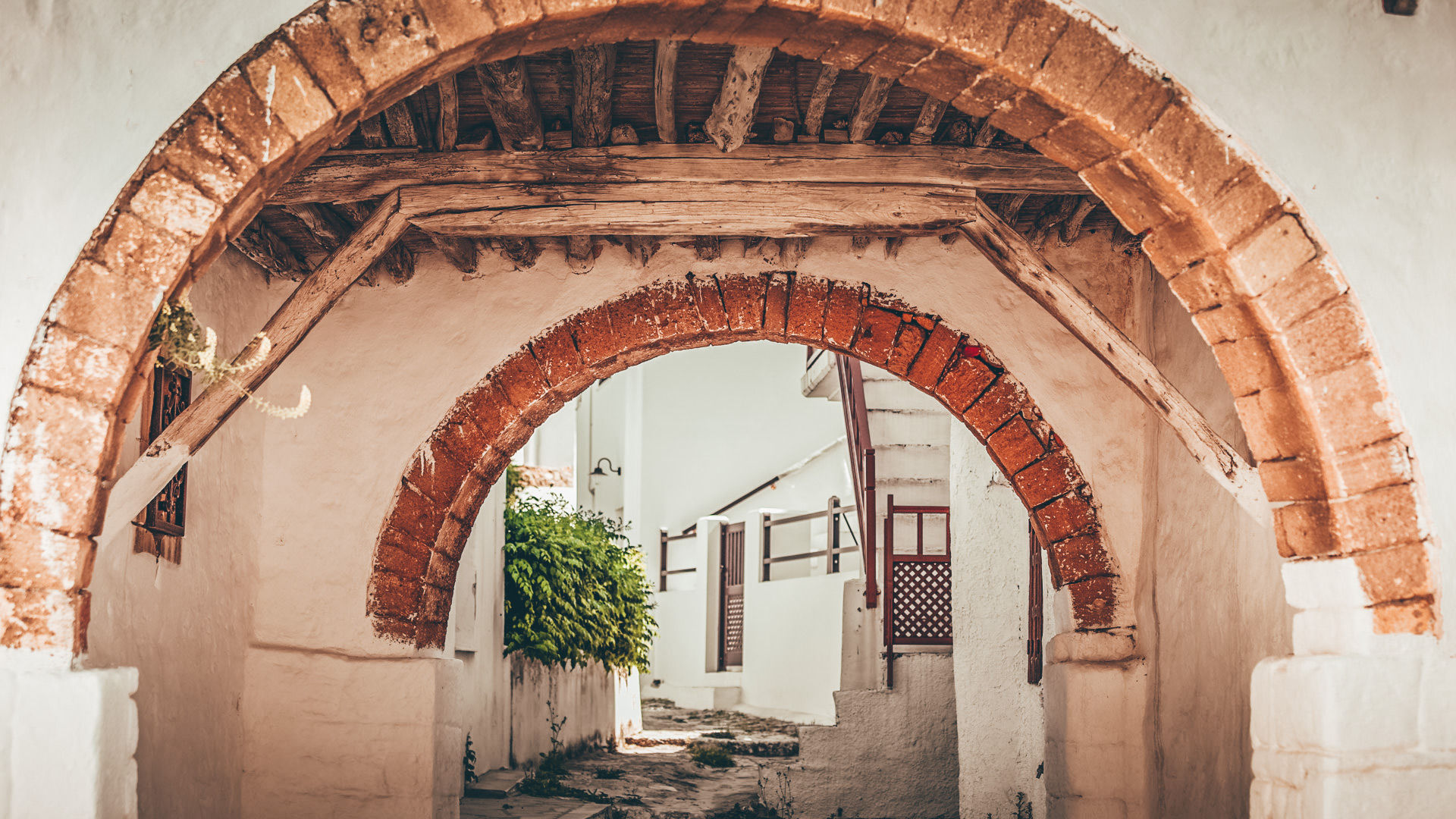 The main town on the island, Hora, is a labyrinth of picturesque small streets 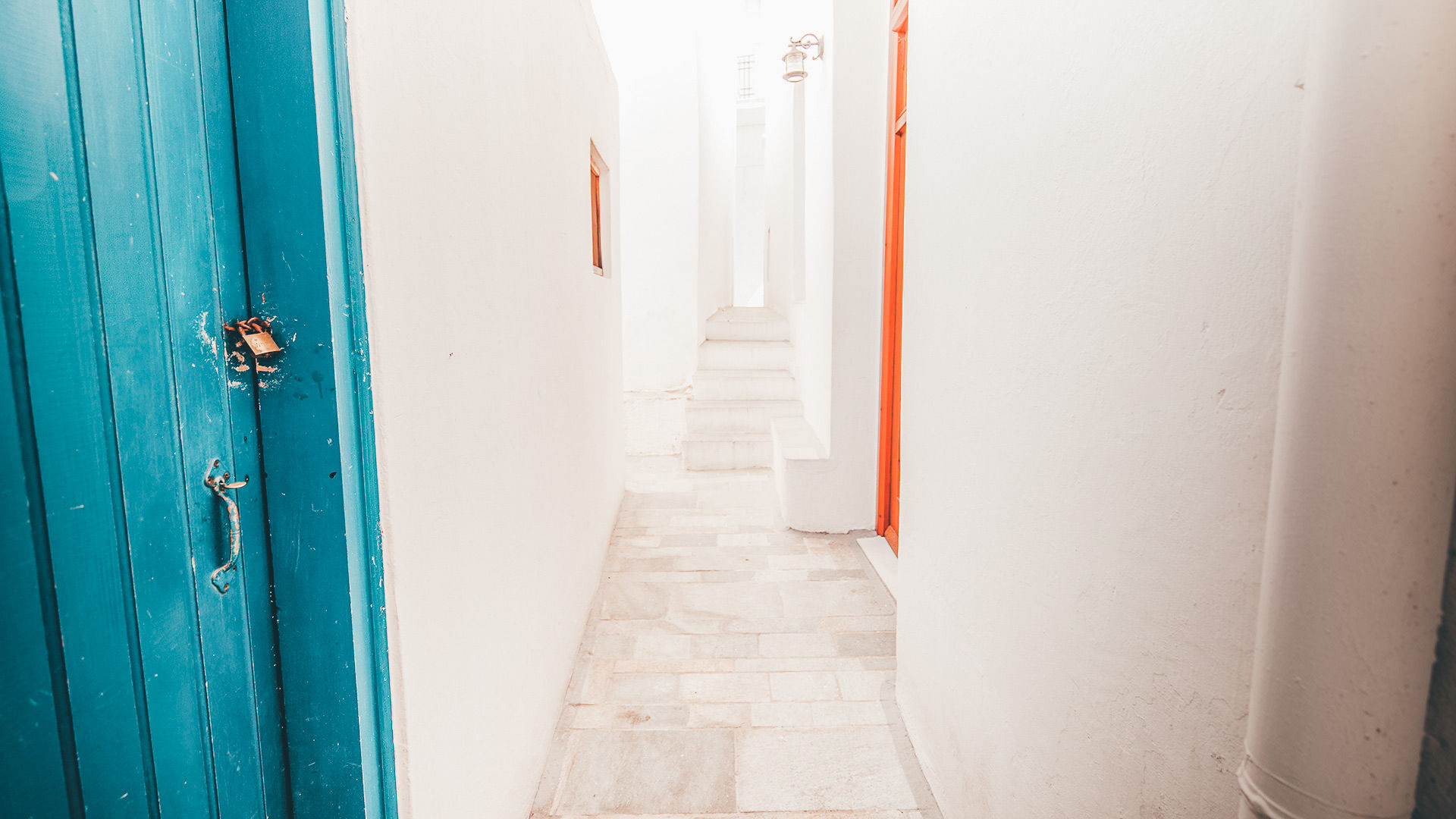 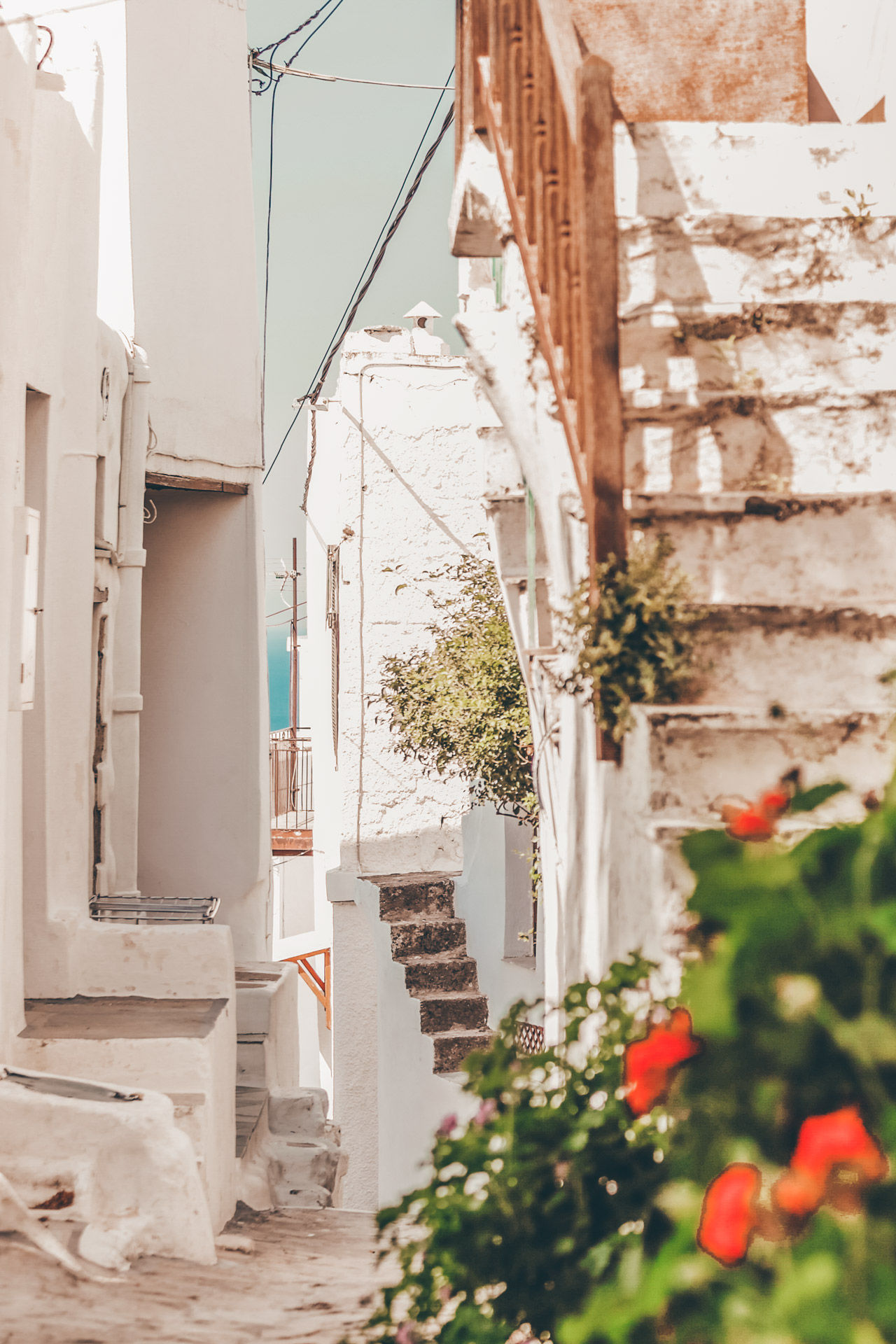 As the terrain becomes steeper, you feel as if you are losing your way – but virtually all paths lead up to the castle and back down to town 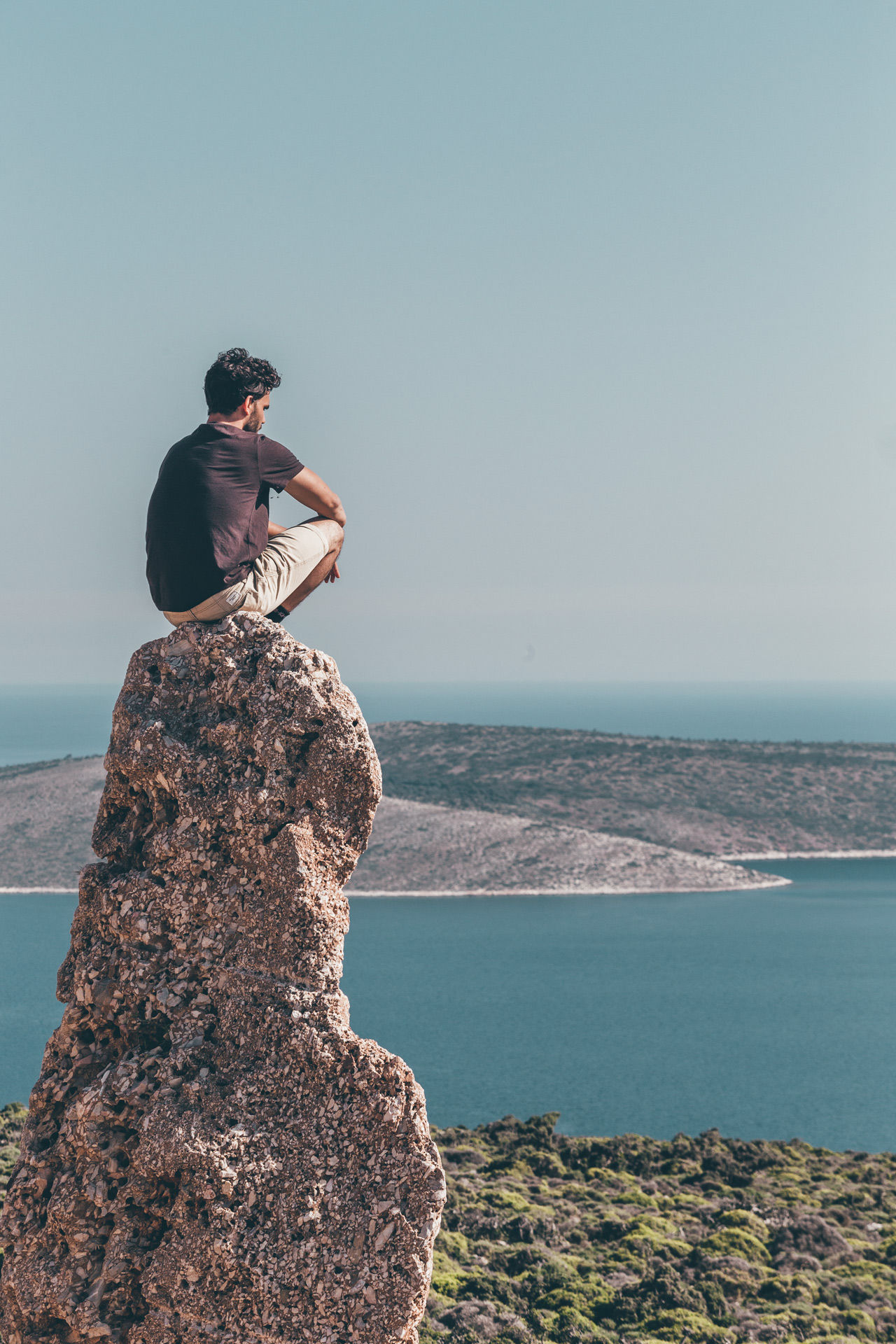 Brooke Square is found just below the castle, heading north rather than returning to town 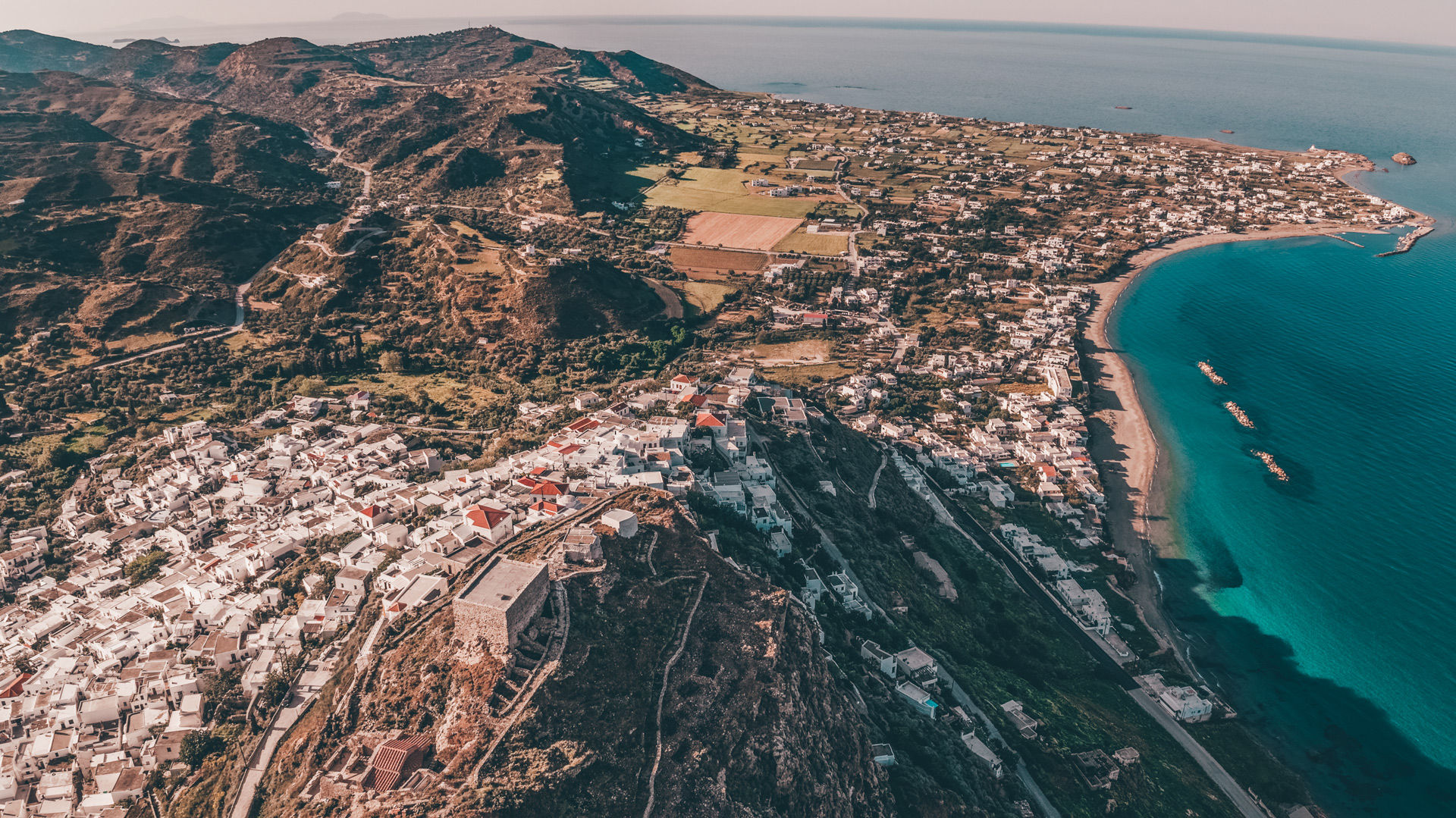 Skyros’ labyrinthine alleyways are the arteries containing its lifeblood. Starting from the town’s main square (it’s car-free from here), slowly wind your way upwards, past the shops, boutiques and little churches. As the terrain becomes steeper, you feel as if you are losing your way – but virtually all paths lead up to the castle and back down to town. Treat yourself to an ice cream on the way up and a jar of thyme honey on the way down (both locally made, of course).

A peek inside a house

You’ll have seen the hand-painted ceramics and ornately-carved tiny wooden chairs in shops in town, but you’ll only understand their place in Skyrian culture by peeking into a house in the residential upper town. The locals will be happy to show you. The diminutive furnishings match the teeny living spaces and, displayed on beautifully carved wooden cabinets or hanging on the wall above bulging fireplaces, will be a collection of ceramic plates passed down through generations. And look out for the embroidery (part of dowries) and the bed built on an open-air platform above the lounge. It’s called a sfa.

The castle and monastery

The crown jewels of the main town are the Byzantine Kastro and even older monastery. Reaching the very top of Hora, you enter the gates of the Agios Giorgos Monastery, dating from around the 10th century and a dependency of the Megisti Lavra Monastery in Mount Athos. The main church is from the turn of the 17th century, as indicated by an engraving on the impressive bell tower. Spend some time admiring the beautiful frescoes and impressive iconostasis before continuing up to the castle. The remains of the fortress are accompanied by good explanatory information, so there’s no need for a guide. The highlight is a 360-degree, bird’s eye view of Skyros and the sea.

Brooke (as the square is referred to by locals) – or the Square of Eternal Poetry – is found just below the castle, heading north rather than returning to town. It has fantastic views over the town beach and its focal point is a bronze statue of a naked man, dedicated to the British First World War poet Rupert Brooke, who died on Skyros in 1915. (You can also visit his grave elsewhere on the island). There’s a long path of stone steps to the beach from here.

Before you head to the beach, pop in to Skyros’ two museums just next door. The Faltaits Folklore Museum, within the 19th century residence of Manolis Faltaits, contains a collection of arcane household memorabilia, such as traditional costumes, maps, manuscripts and sepia photographs. And the small but purposeful two-roomed Archaeological Museum has gathered locally sourced ancient findings, including pottery from the 2800-1900BC prehistoric settlement of Palamari, to the north of the island.

After scaling the castle and looking around the museums, you’ve earned a swim and an afternoon on the beach. Continuing the steps down to the coast, you reach Magazia. Almost a kilometre of beachfront, Magazia (or Molos, as the bay is called) has everything from tavernas, beach bars and clusters of umbrellas and sun-loungers, to long stretches of nothing but sand. You can have dinner here or return to town by taking the stairs you descended or catching the bus.

From Linaria (the port):

It’s possible to enjoy all the experiences highlighted here in half or a full day. 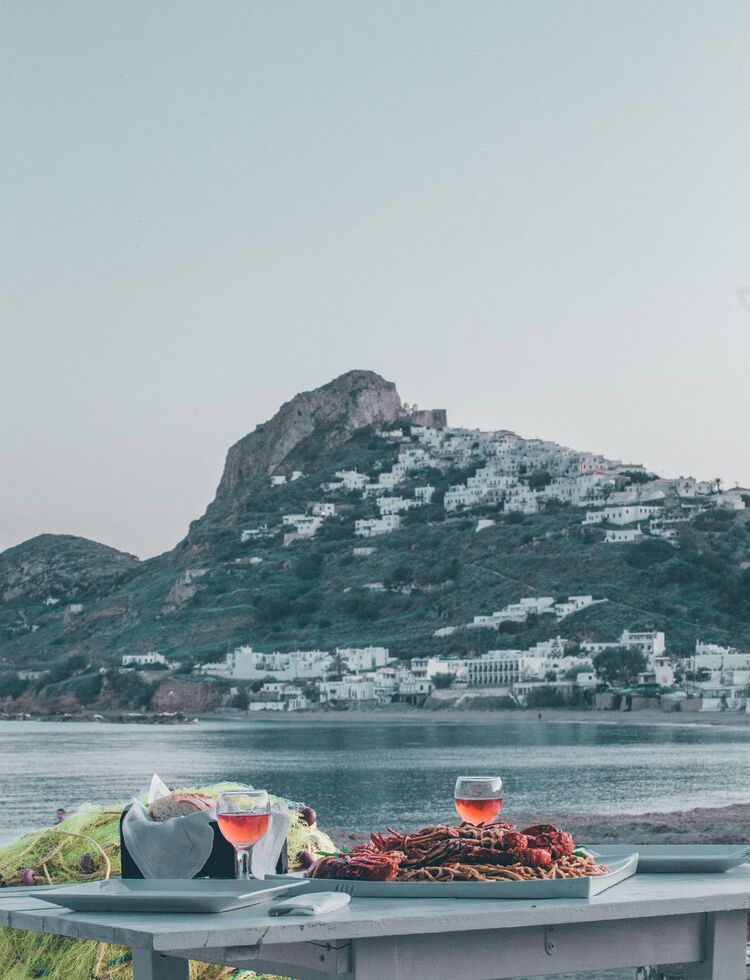 An island with its soul still intact
Discover It 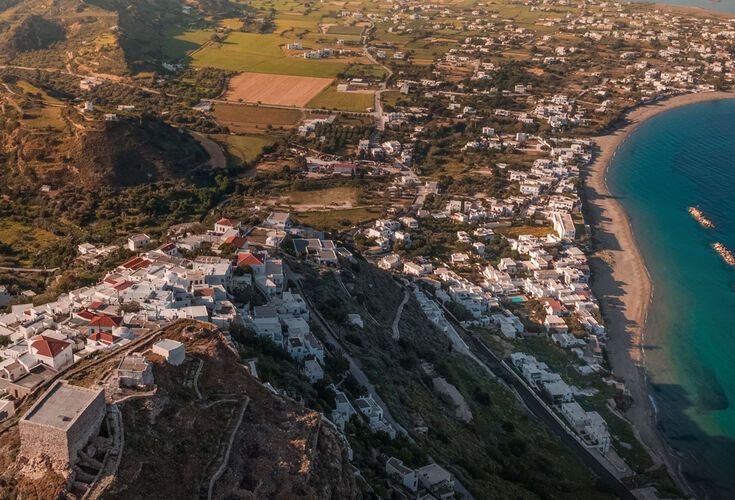