A walking tour of Heraklion town in Crete

A walking tour of Heraklion is the best way to get to know Crete’s lively capital city, with amazing history, great food and hospitable locals all year round 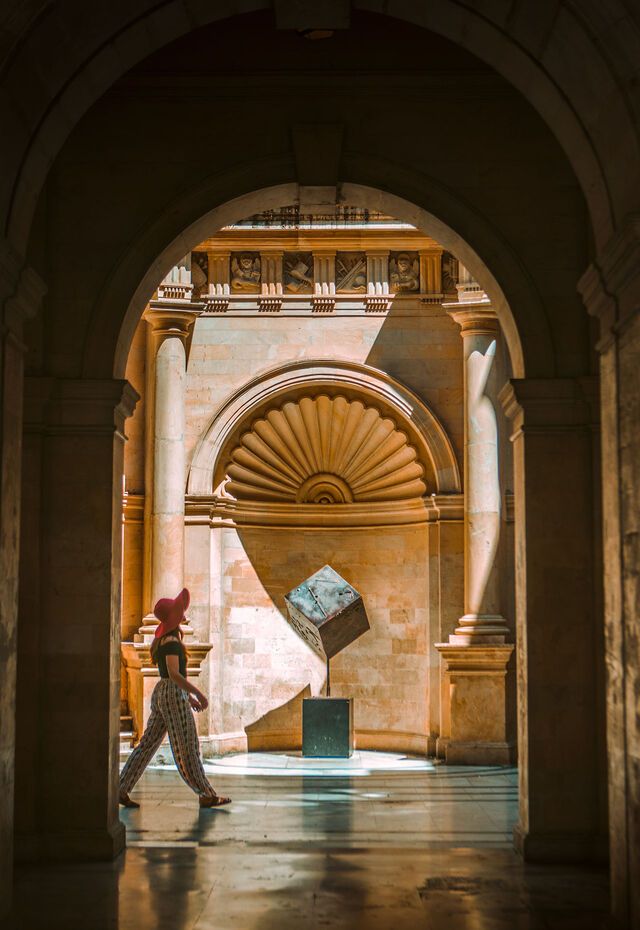 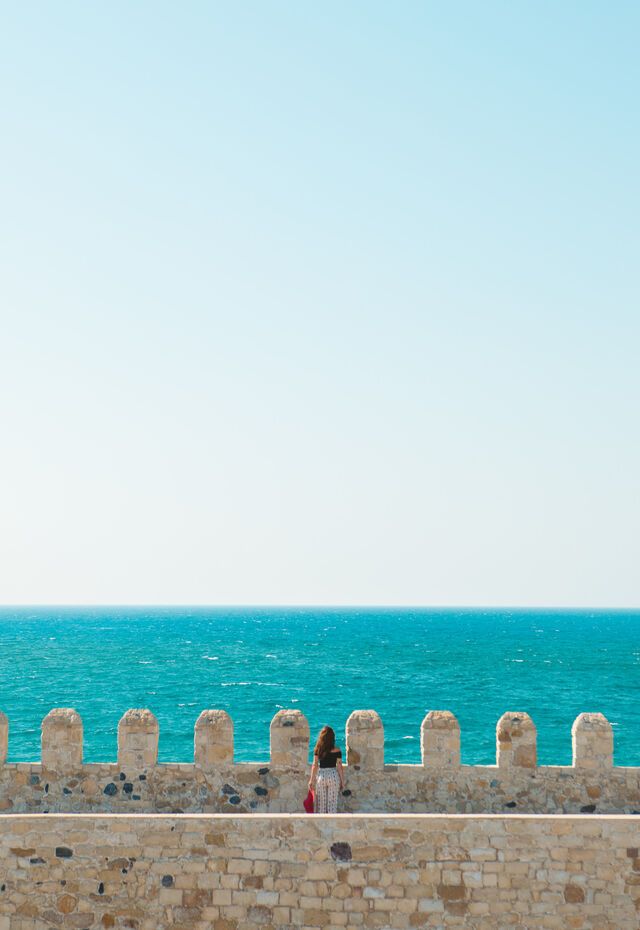 Heraklion is one of the most popular holiday destinations in Greece – and rightly so as it offers a multitude of beaches, tourist resorts and historical sights, as well as the outstanding food and hospitality that we all know and love about Crete. So wherever your holidays on Greece’s biggest island take you, it’s worth dedicating a day to a walking tour around its capital (Heraklion is the name of both the town and region). You’ll discover its rich history and all the civilisations that left their mark on it (Arabs, Venetians, Ottomans…) and a city alive throughout the year, with scenic squares and streets stacked with restaurants and tavernas, trendy bars and cultural sights. 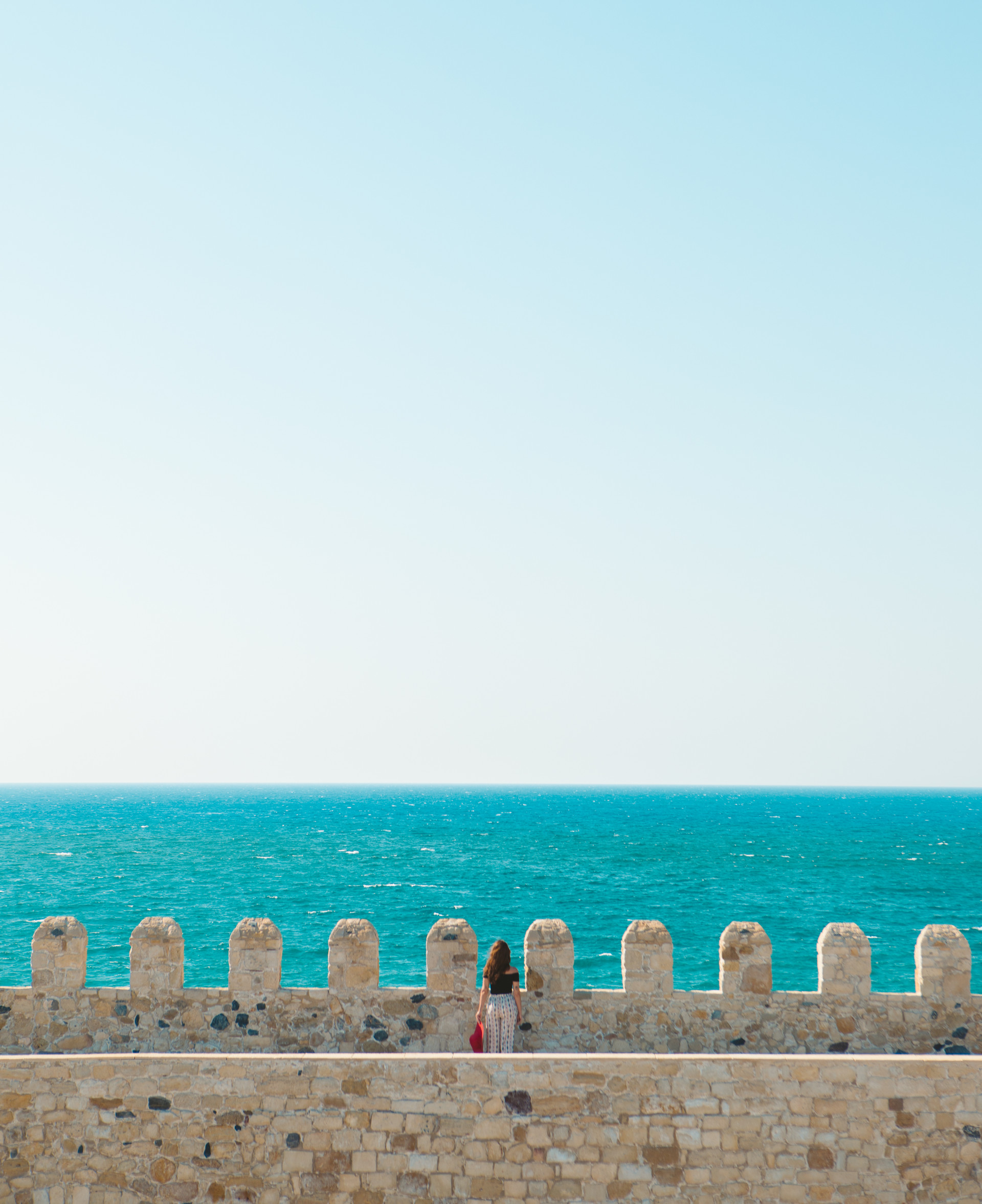 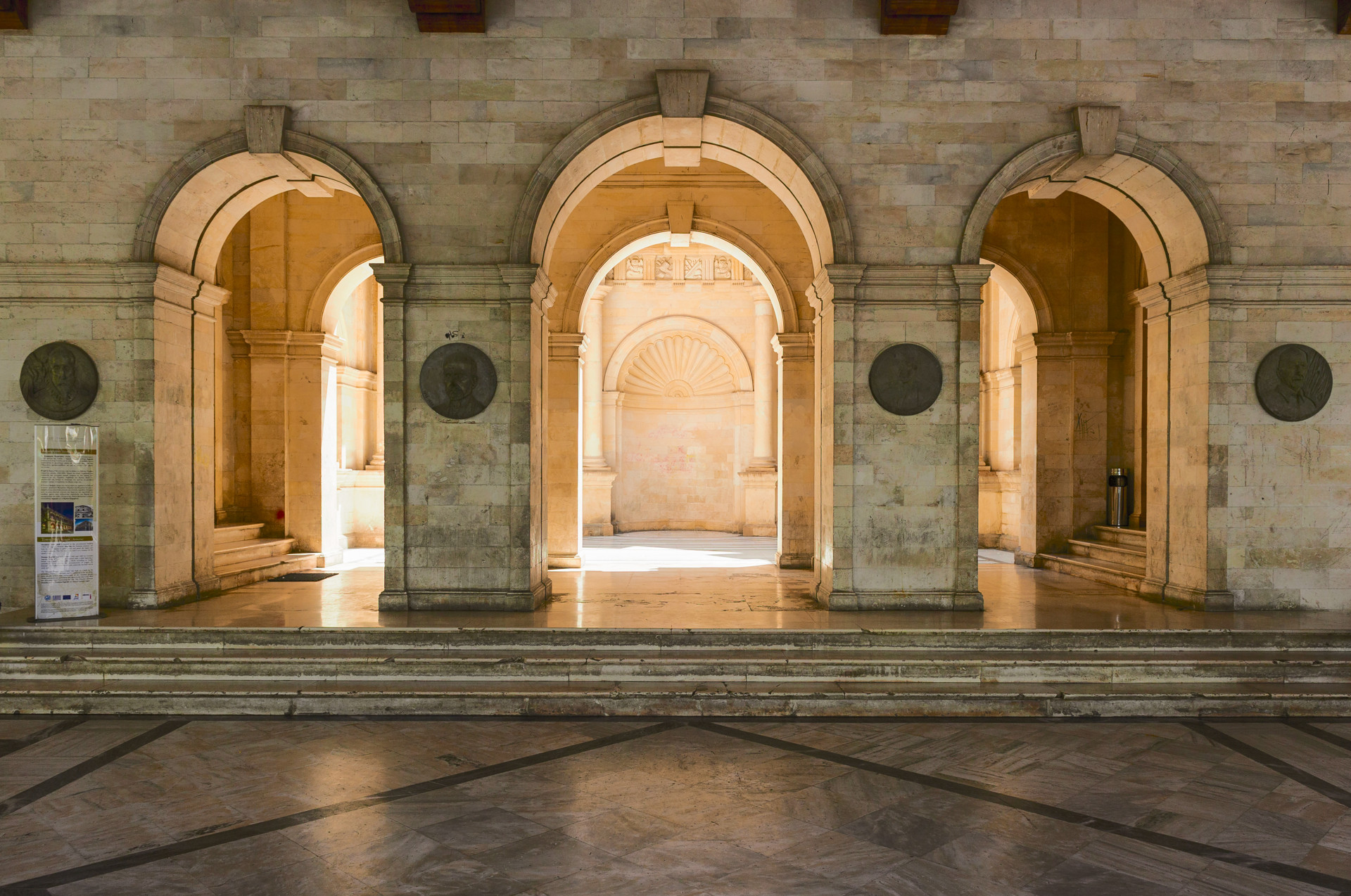 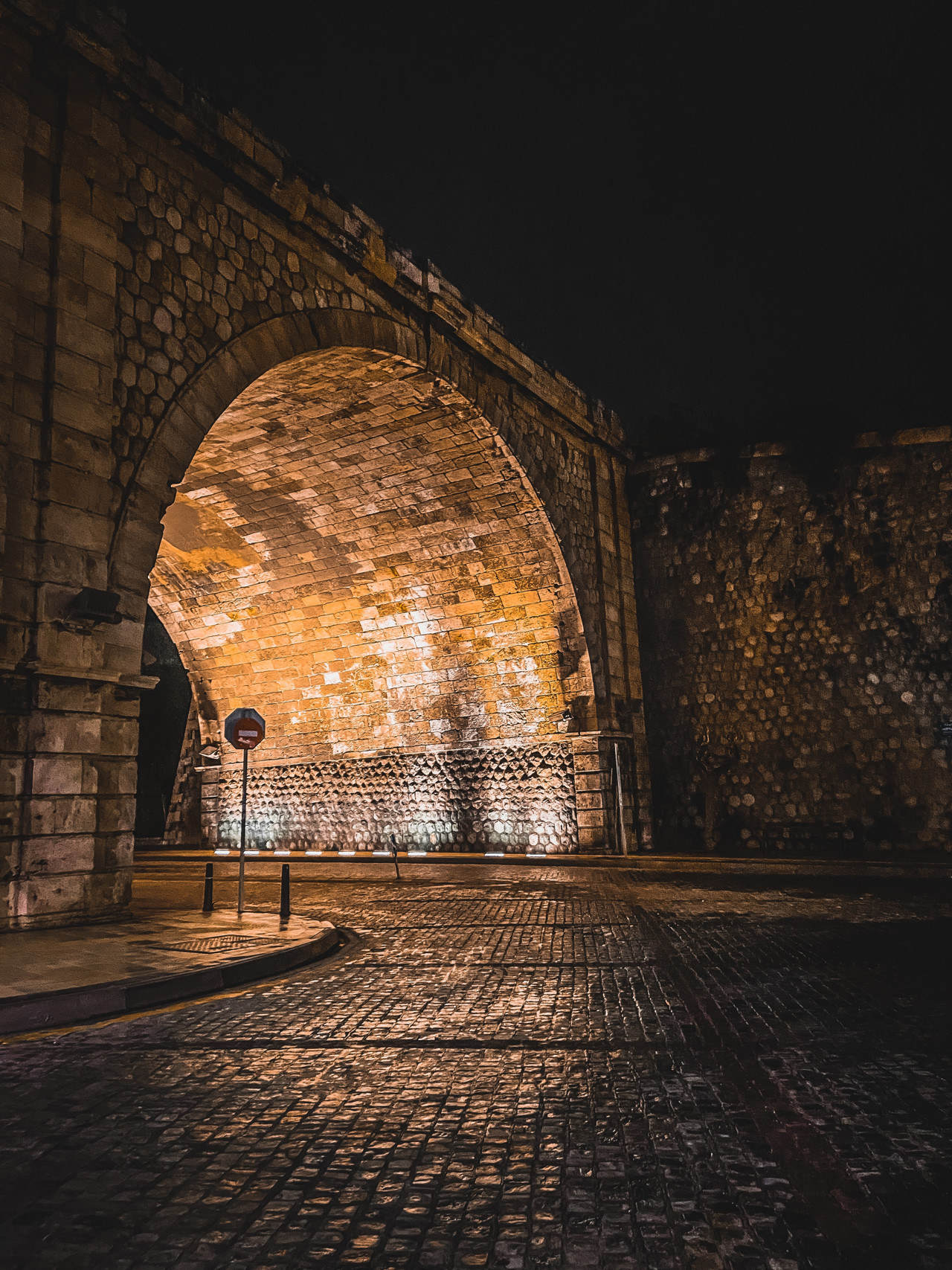 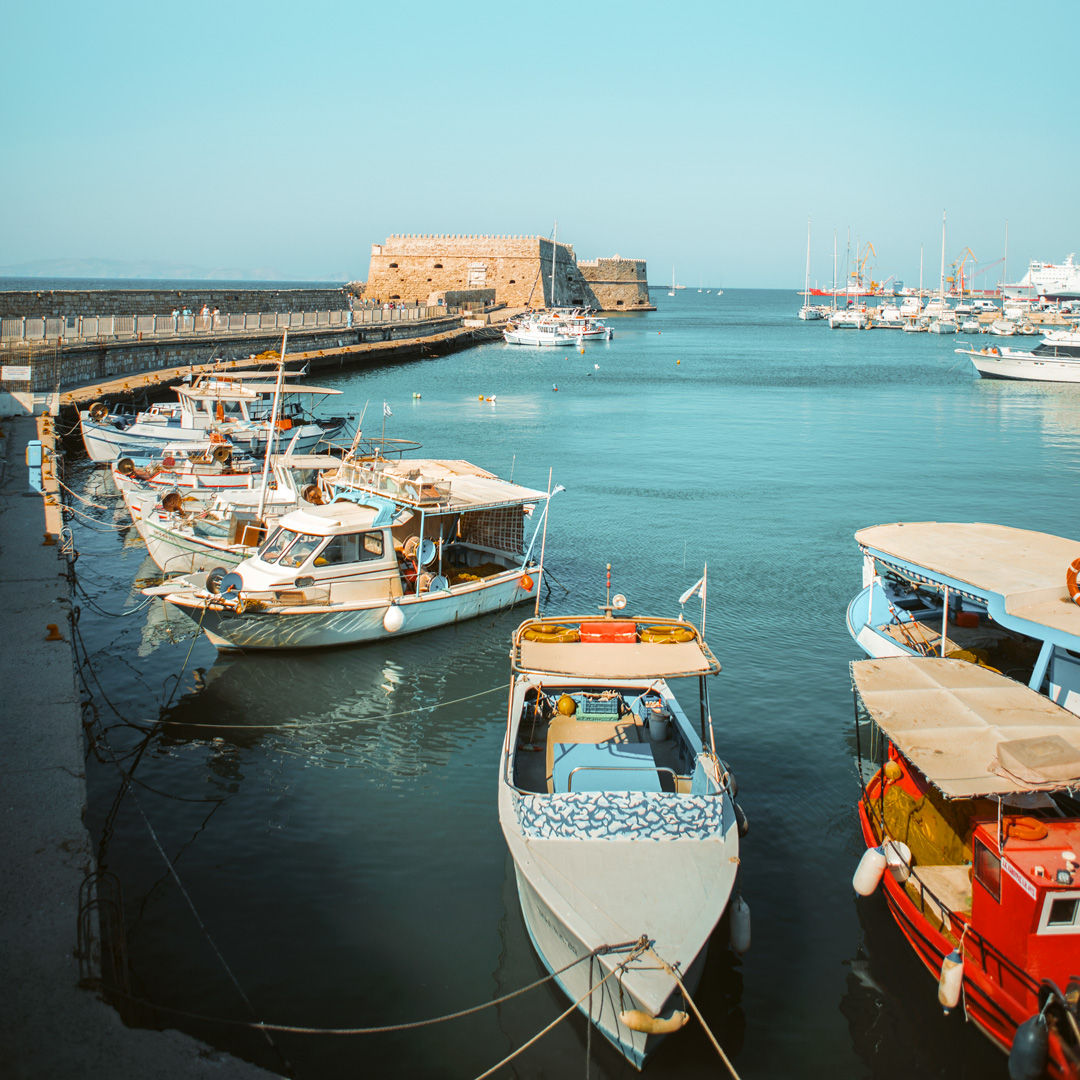 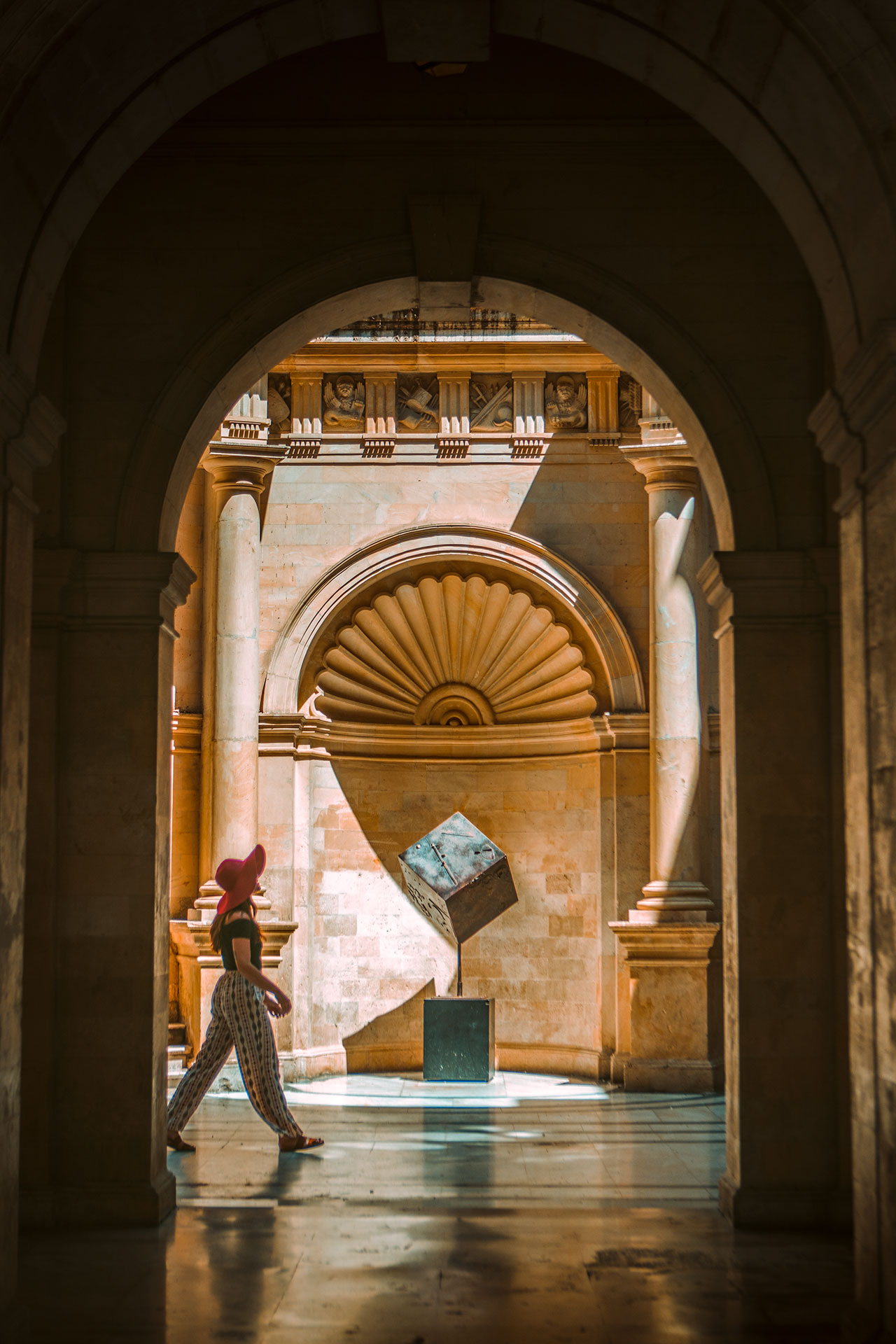 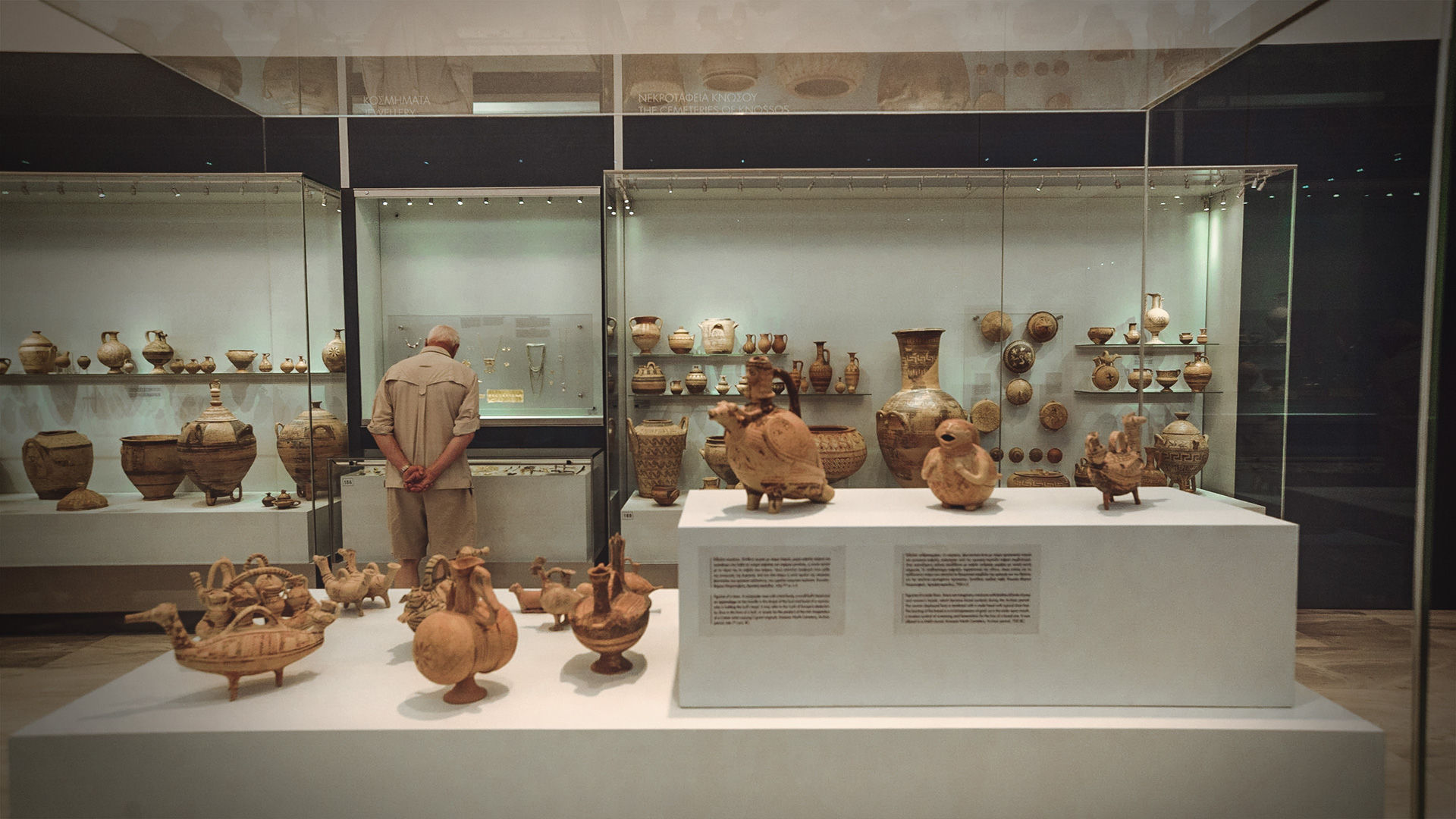 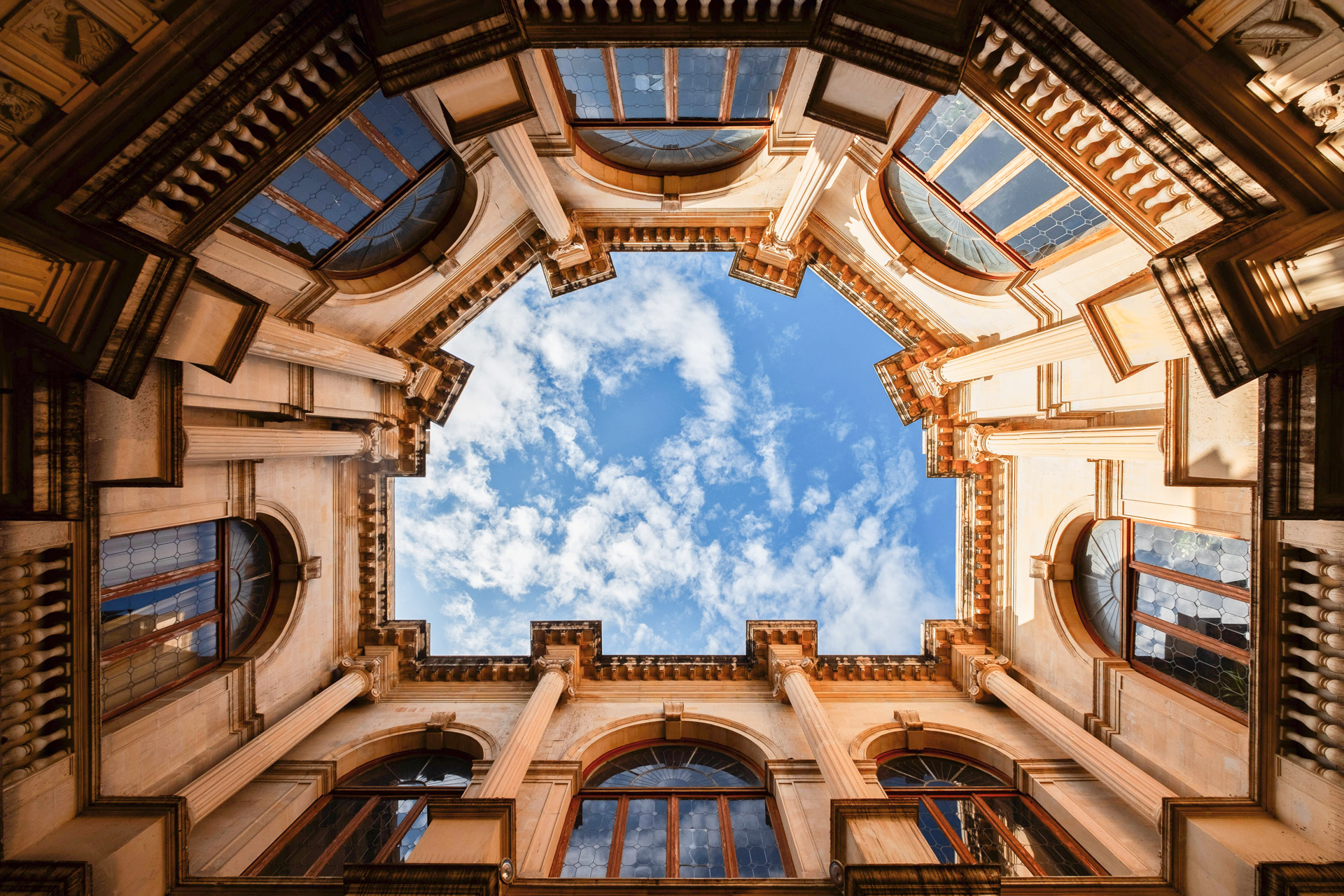 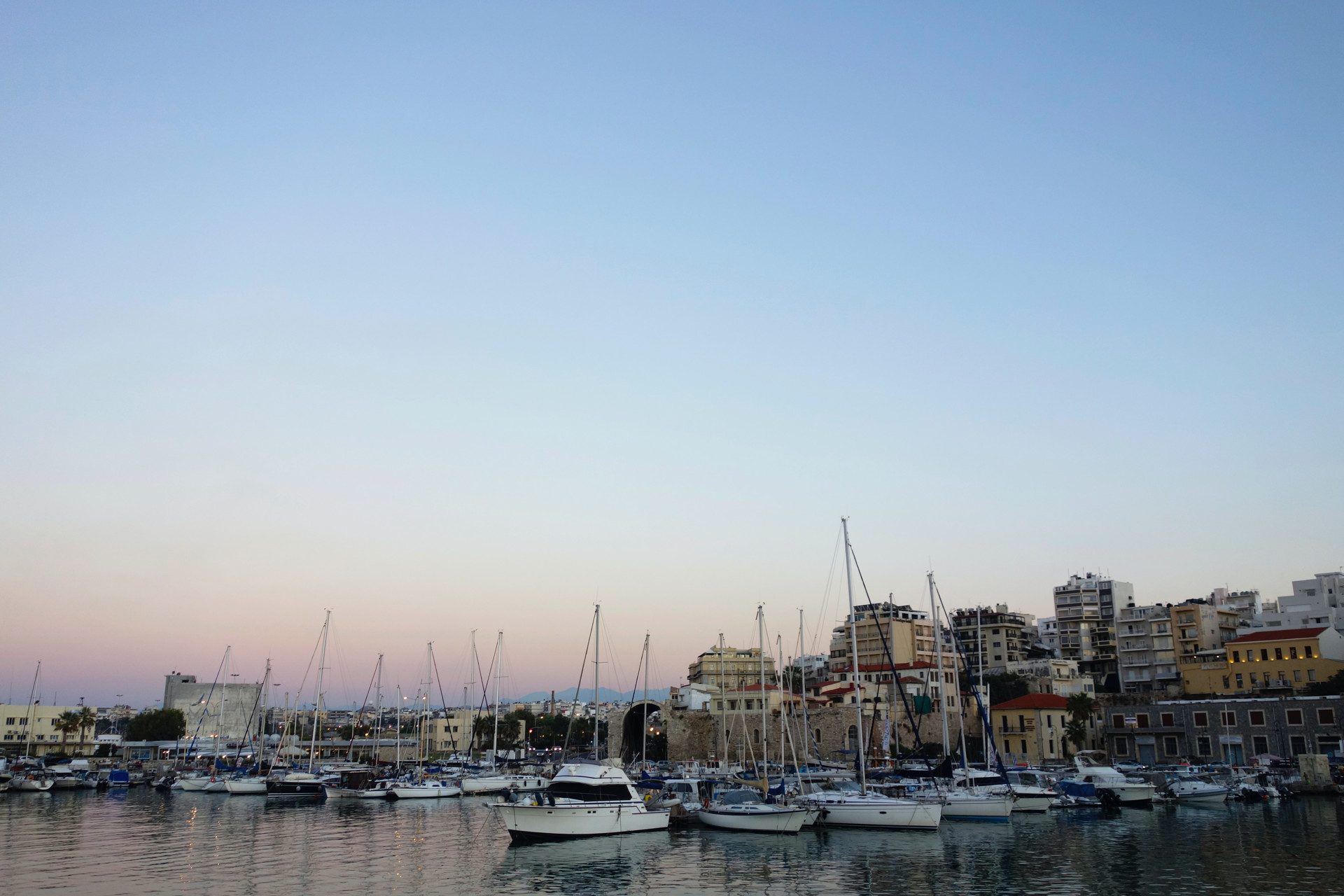 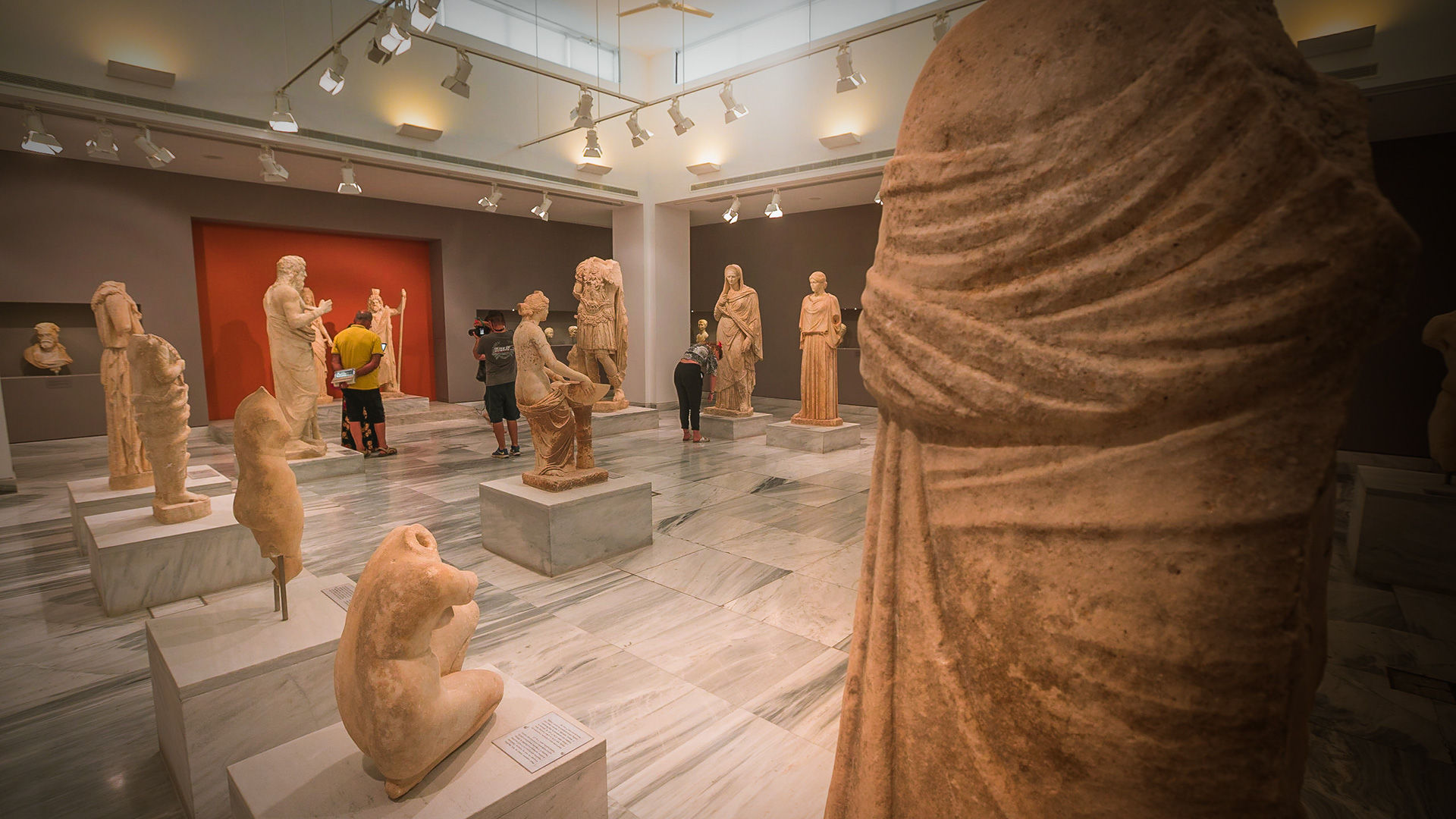 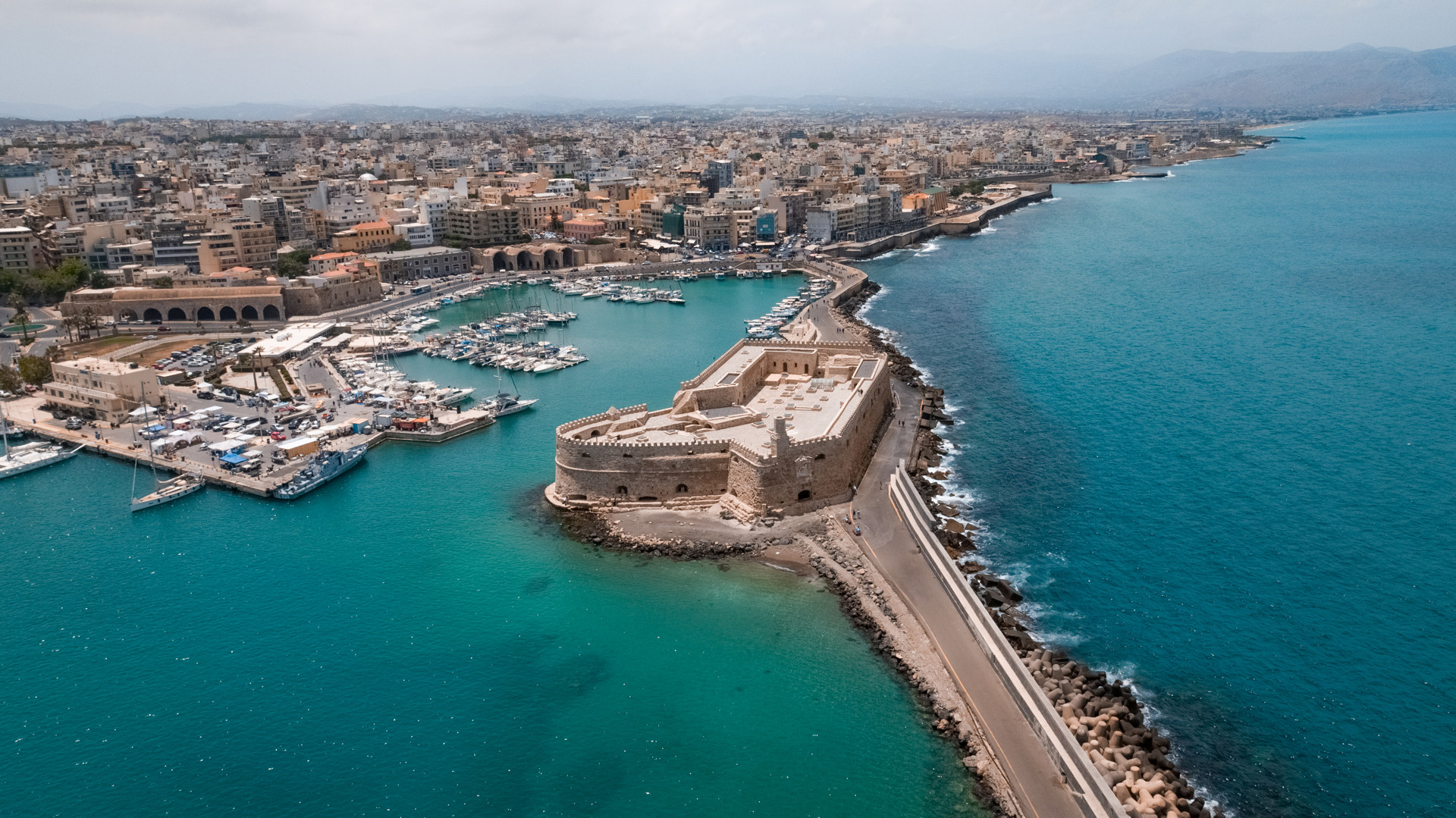 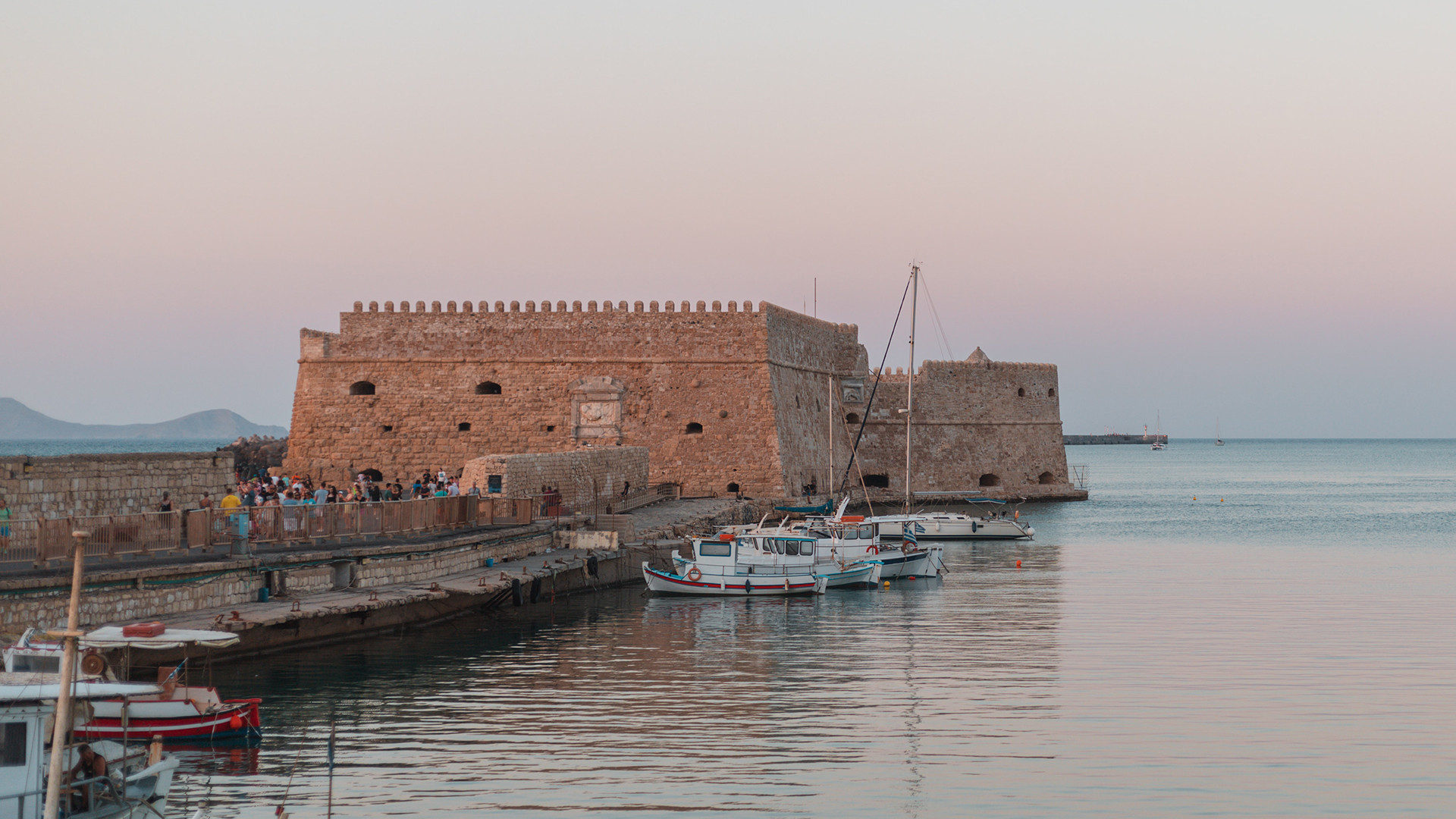 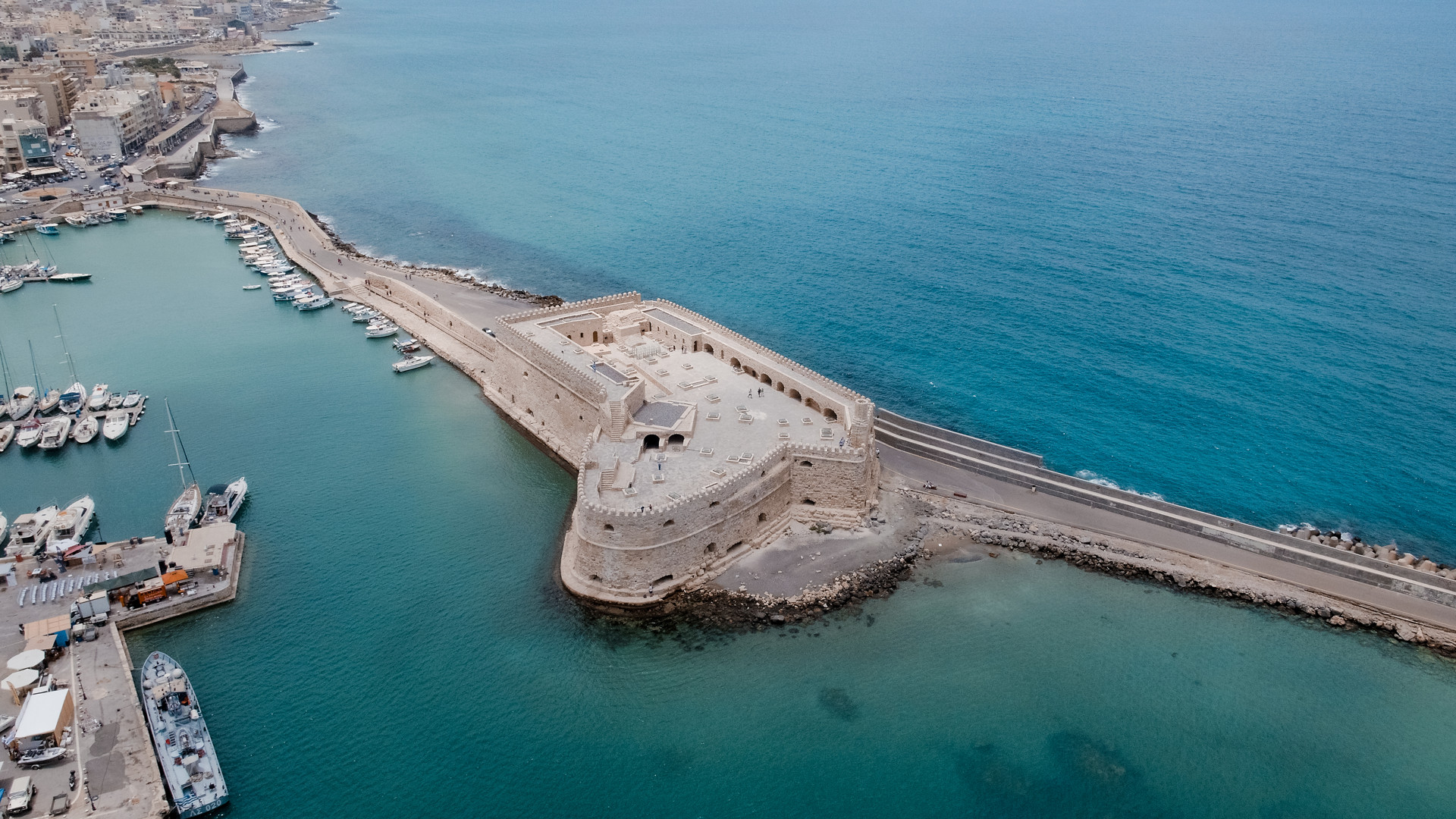 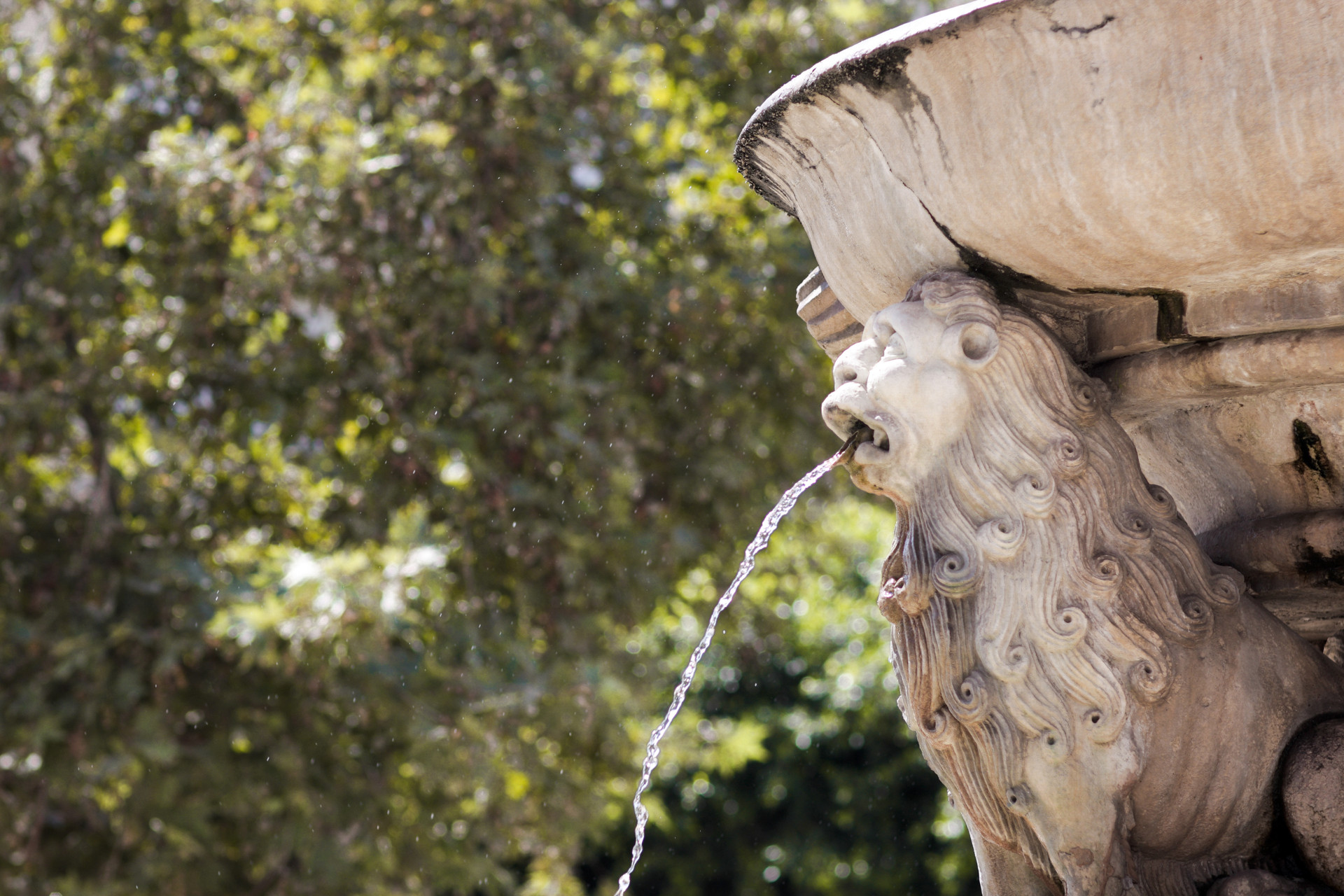 Highlights of a walking tour of Heraklion town

The first stop on your walking tour has to be the Archaeological Museum of Heraklion. It puts everything into context, with exhibits spanning an incredible 5,500 years – from Minoan times all the way up to the Classical and Roman periods. Highlights include the Phaistos Disc (found at the Minoan Palace of Phaistos and famous for its as yet undeciphered 7th-century BC script) and some of the best-known artefacts from the Palace of Knossos (just 13km away), such as the Bull's Head rhyton, the Bull-Leaper’s fresco and the Snake Goddess figurines. Keep an eye out for the portraits of Roman emperors, indicating Crete’s importance during Roman times.

Continuing to Heraklion’s Venetian harbour, you reach the Koules Fortress (aka Castello Del Molo or Rocca a Mare). Built for protection by the Venetians in the early 13th century, it took its final form in 1523-1540 after being rebuilt after an earthquake. Note the embossed lion plaques of Saint Mark (a Venetian trademark) on the exterior. The fortress is open to the public (with cultural events held there during summer months) and offers excellent views over the port. Meanwhile, the 2.5km path to the lighthouse at the end of the pier is a favourite for jogging and biking locals.

Just along the coastal road by the harbour is the Historical Museum of Crete, housed in a listed neoclassical mansion. The museum offers a speed lesson on the history of Crete, all the way from the early Christian period to the present. There’s a permanent collection of ceramics, sculptures and coins, as well as Byzantine and post-Byzantine scrolls and manuscripts and more recent exhibits from Crete’s Ottoman and WW2 occupations. Also of interest are folk exhibits from everyday life in Crete in the 19th and 20th centuries, gathered from various remote villages, and personal items belonging to Nikos Kazantzakis – possibly the best-known modern Greek writer (of Zorba the Greek fame).

Your walking tour in Heraklion town takes you back down the coast road next, either retracing your steps past Koules Fortress or weaving through the backstreets to the Dominikos Theotokopoulos Park (the bust in the park reveals Dominikos’ better-known name… El Greco). You reach the pedestrianised August 25 Street, named after the massacre of hundreds of Cretans and 17 British soldiers by Turks on the feast day of St Titus. Pop into the Church of St Titus in the same-named square, erected following the expulsion of Arab pirates by Nikiforos Fokas in 961 AD. During Ottoman times, it was repurposed as a mosque and, after being levelled by the great earthquake of 1856, rebuilt before being turned back into a church dedicated to The Apostle Titus in 1925 after Crete’s liberation. If you haven’t yet stopped for a rest, there are plenty of cafes, restaurants and bars around the square.

During Venetian times, the Loggia was the official meeting place of the aristocracy to discuss the most important financial, commercial and political issues of the day … or to just hang out. Heraklion’s original Loggia was built in the 14th century near the sea and it has since been relocated twice, settling in its final location on August 25 St in 1626-28. It is the most important architectural legacy of Francesco Morosini, Heraklion’s Venetian ruler of the time. A rectangular, two-story edifice, with an open portico in the basement and numerous archways, it is considered the most elegant Venetian monument in Crete and is said to be a copy of the basilica of the Palladio in Vincenza (clearly the Venetians held Crete in high esteem). Recently renovated, it now houses Heraklion’s city Hall.

Continuing your walk, your reach the Basilica of Saint Mark (100m down the road from the Loggia), which held a significant position with locals as Saint Mark was the patron saint of Venetians. As such, it was here that the anointment of public officials and leaders took place. Its construction began in 1239 and the basilica went through various phases until its final incarnation in 1956. It now houses the Ηeraklion Art Gallery (with more than 900 works by Modern Greek artists) and doubles as a seminar, event, and exhibition space.

Right across the Basilica of Saint Mark is another Heraklion landmark (and a meeting point for locals and visitors). The Morosini Fountain, in Lions Square, is considered one of the prettiest monuments in Heraklion (it’s one of several working Venetian-era water fountains in the city). It was another of Francesco Morosini’s creations (finished in 1628) and is considered a feat of engineering for its time as it brought water to the city through a complex system of pipes.

The final stop on your walking tour around Heraklion town is the Cathedral of Agios Minas, around 400m away and one of the biggest churches in Greece. Its cornerstone was laid on 25 March (Independence Day) of 1862 as a sign of gratitude by locals for the protection offered to the city during the rebellion against the Ottomans. There is a small cobbled square in front of the church, as well as another small church dedicated to Agios Minas (built in 1735). Next to it, you’ll find the church of St Aikaterini, housing an exhibition of Byzantine icons and artefacts, while Agia Katerini Square and the adjacent streets are stacked with traditional raki and meze tavernas and shops.

Group
See Crete from a bird's eye view! We offer you a mini-trip above breathtakingly beautiful landscape of Lassithi plateau: famous wind mills, Zeus cave and...
EXPLORE ALL
Offer

How do you get to Heraklion, Crete?

How do you reach Heraklion from the airport?

Heraklion city is roughly 6km (about a 15min drive) from the airport. You can rent a car or catch a cab or public bus (check here for the schedules and maps).

When is the best time of year to visit Heraklion?

How much time does a walking tour of Heraklion town take? 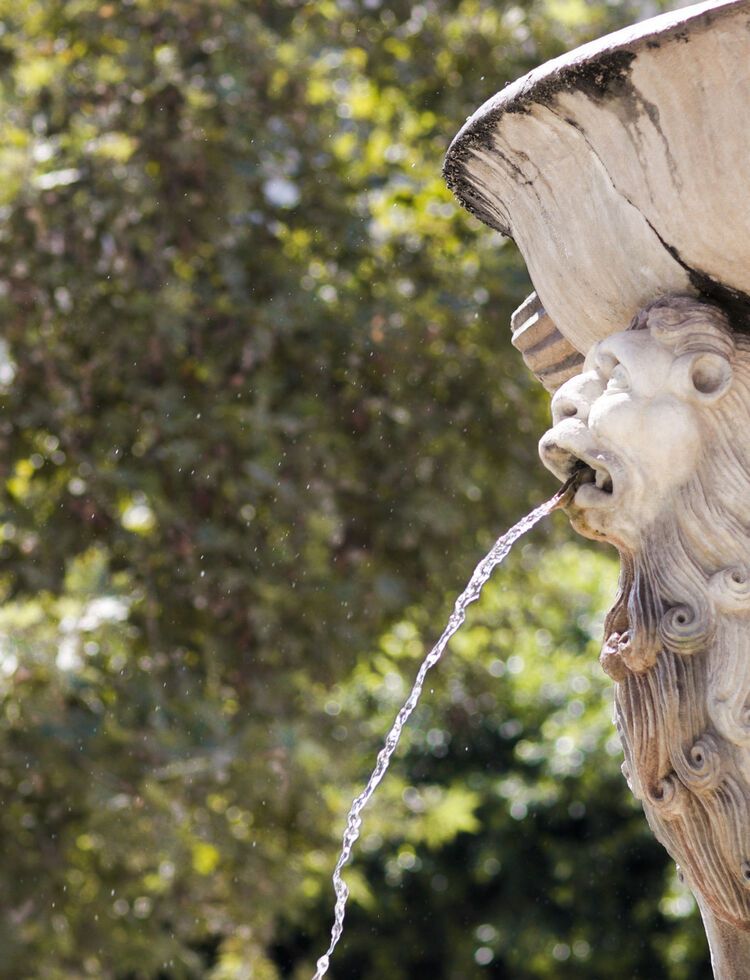 Keep the streets as clean as possible by using the bins provided or keeping your rubbish with you until you find one.
Use a refillable water bottle to minimise your use of plastic.
Respect the cultural monuments and relics and don’t use flash photography if there’s a sign forbidding it.
Do your best to support small, independent family-owned stores and local producers, taking home something handmade and local.
Respect the plants and animals.
Be inquisitive and definitely ask the locals for tips.
Read More Read Less