Sponsored by Aegean Airlines
By nationalgallery.gr
With paintings by prominent Greek artists, the stunningly refurbished National Gallery of Athens is a must for art lovers visiting the city, tracing the evolution of modern Greece through art. 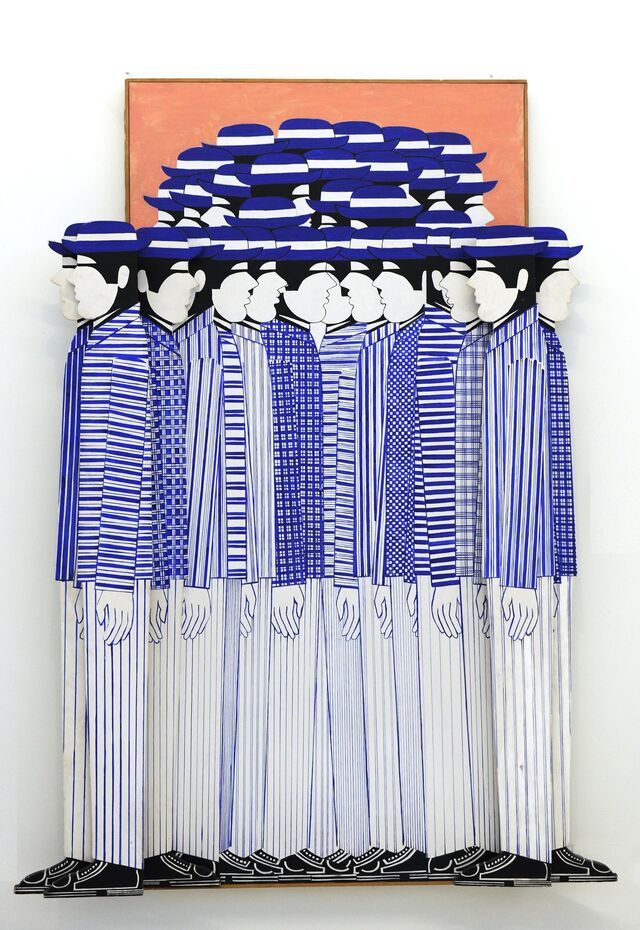 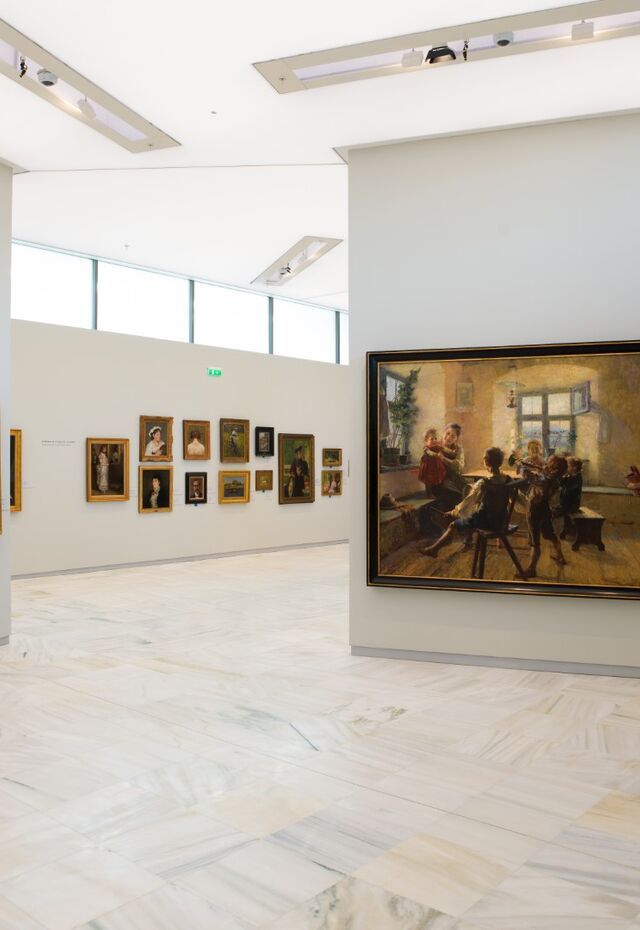 View on map
Duration
2 - 3 hours
Season
All year round

The National Gallery is the museum Athens was waiting for. It was established in 1900 but its current incarnation – in an ultra-modern, fully refurbished building reopened in 2021 – finally does justice to the extraordinary wealth of its exhibits.

You’ll find the occasional gem by a European master (such as Rembrandt and Picasso) but the real reason for visiting is to witness the evolution of modern Greece through the works of its most prominent artists.

From the colourful post-Byzantine years to key moments and personalities of the 1821 revolution against the Ottomans and the establishment of the modern Greek state, Greece’s history is depicted in portraits, still lifes and landscapes & seascapes with historical and mythological motifs, as well as personal themes of the artists.
More than 1,000 works are spread across 21,000m2 amidst decor that is minimalist and chic, with the lighting (much of it natural) often giving the impression that the paintings are almost luminous.

You’ll be introduced to works by the best-known modern Greek painters – amongst them Dominikos Theotokopoulos (better known as El Greco), Nicos Engonopoulos, Yiannis Moralis, Iakovos Rizos, Kostas Tsoklis Giorgos, Gounaropoulos, Giorgos Iakovidis, Evripidis Koutlidis and Alekos Fassianos, as well as those in the Don’t Miss highlights below – although you certainly don’t need to be an aficionado to appreciate their beauty or significance. 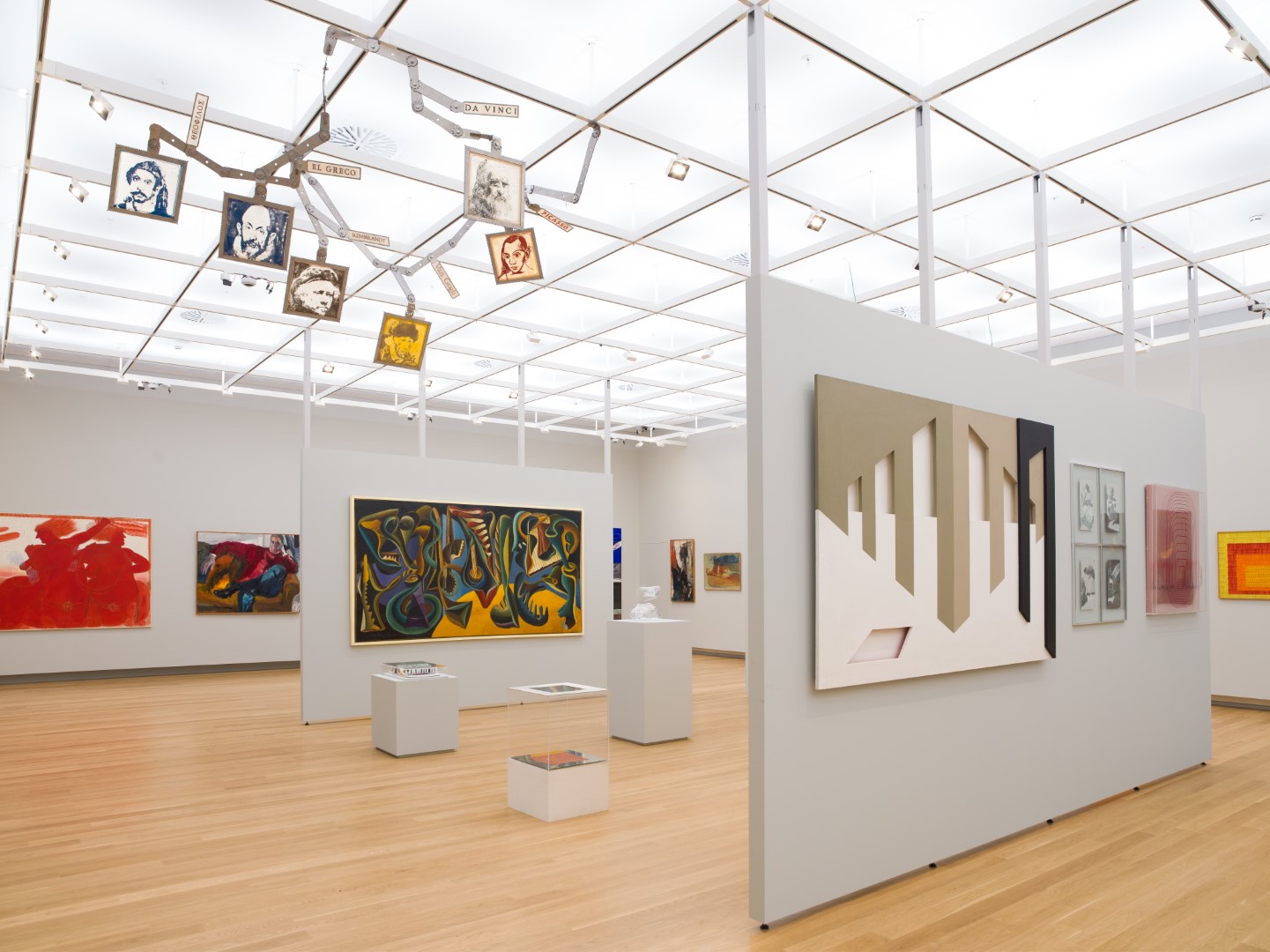 The National Gallery is the museum Athens was waiting for
By nationalgallery.gr 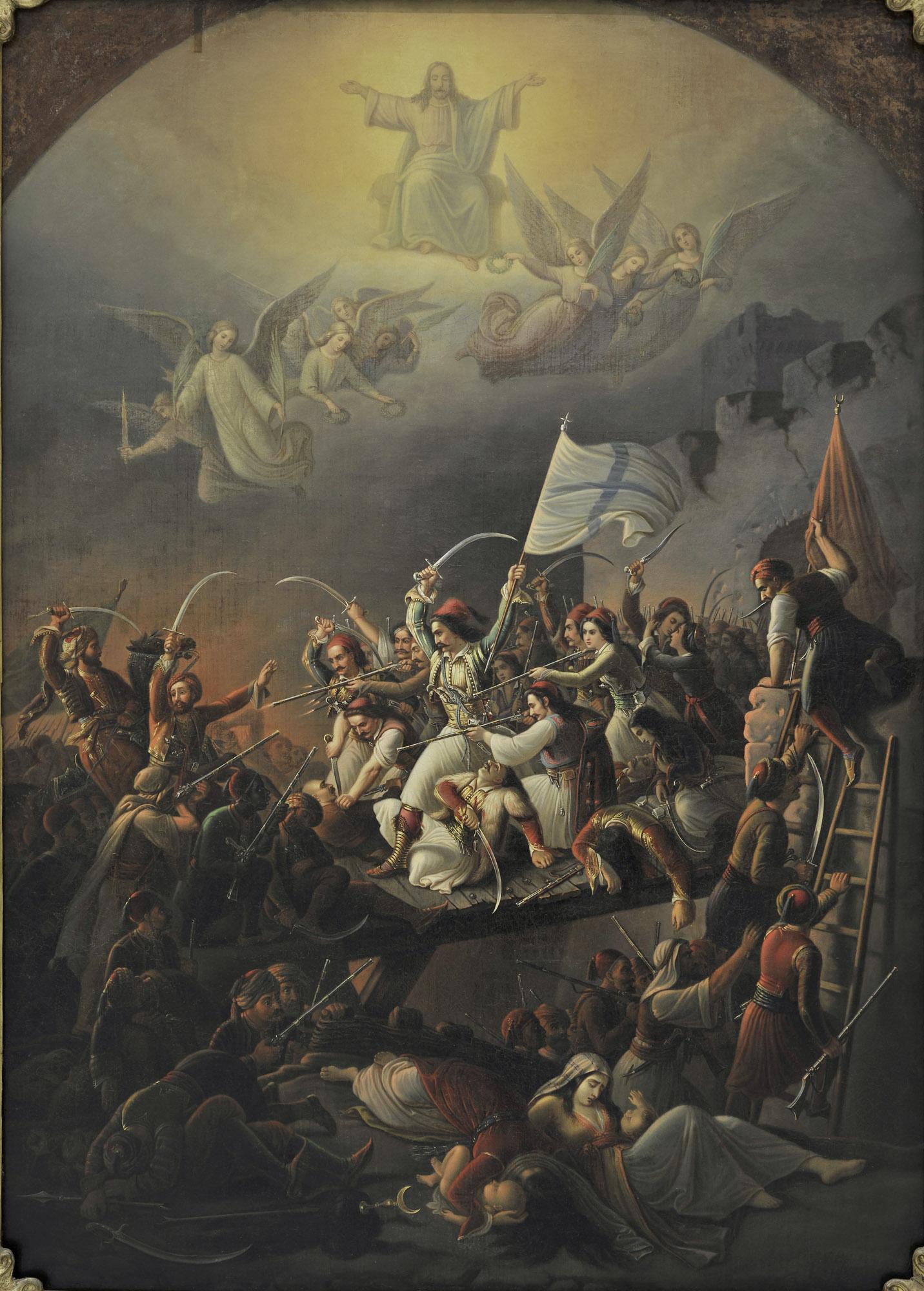 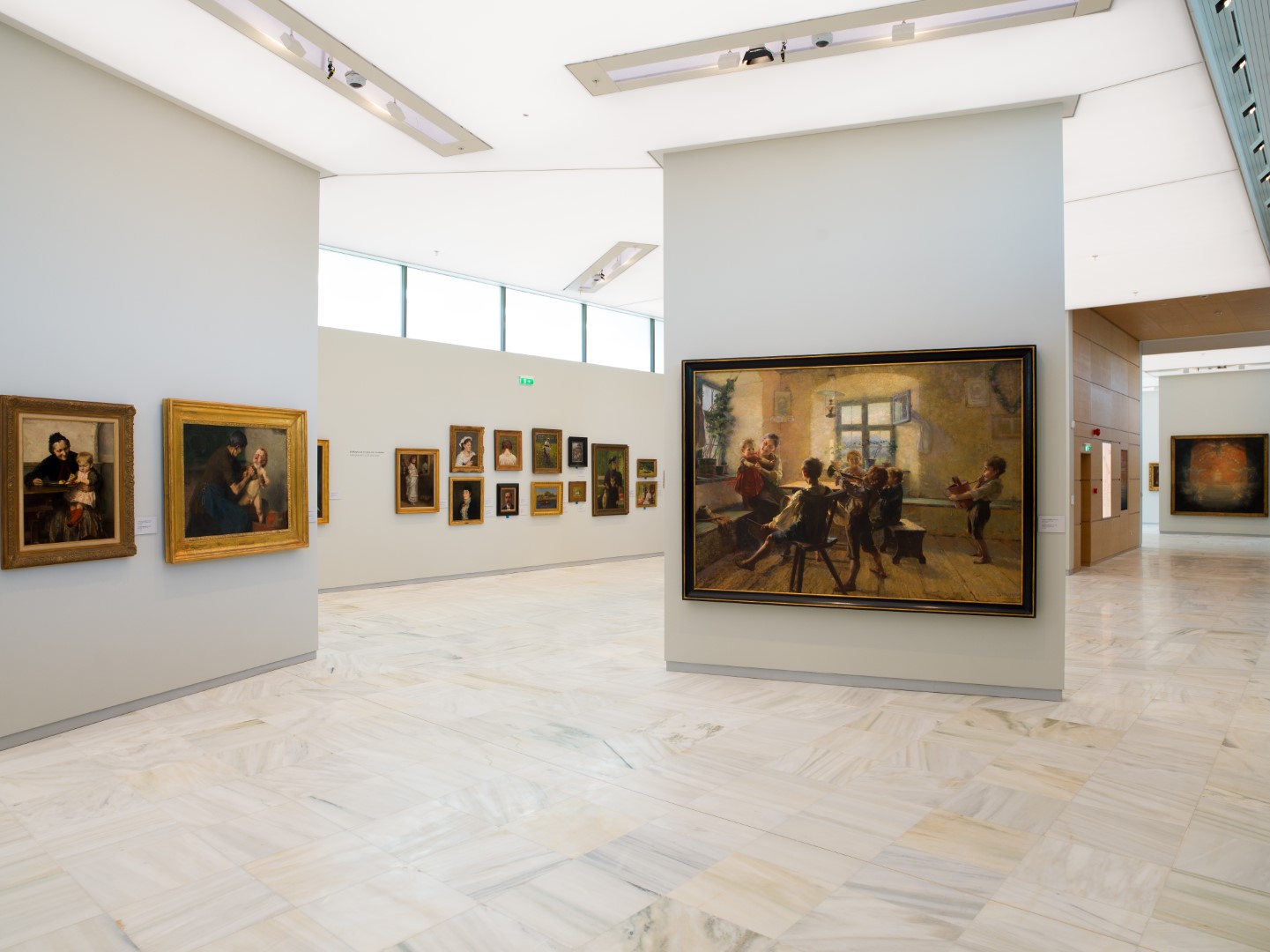 More than 1,000 works are spread across 21,000m2 amidst decor that is minimalist and chic
By nationalgallery.gr 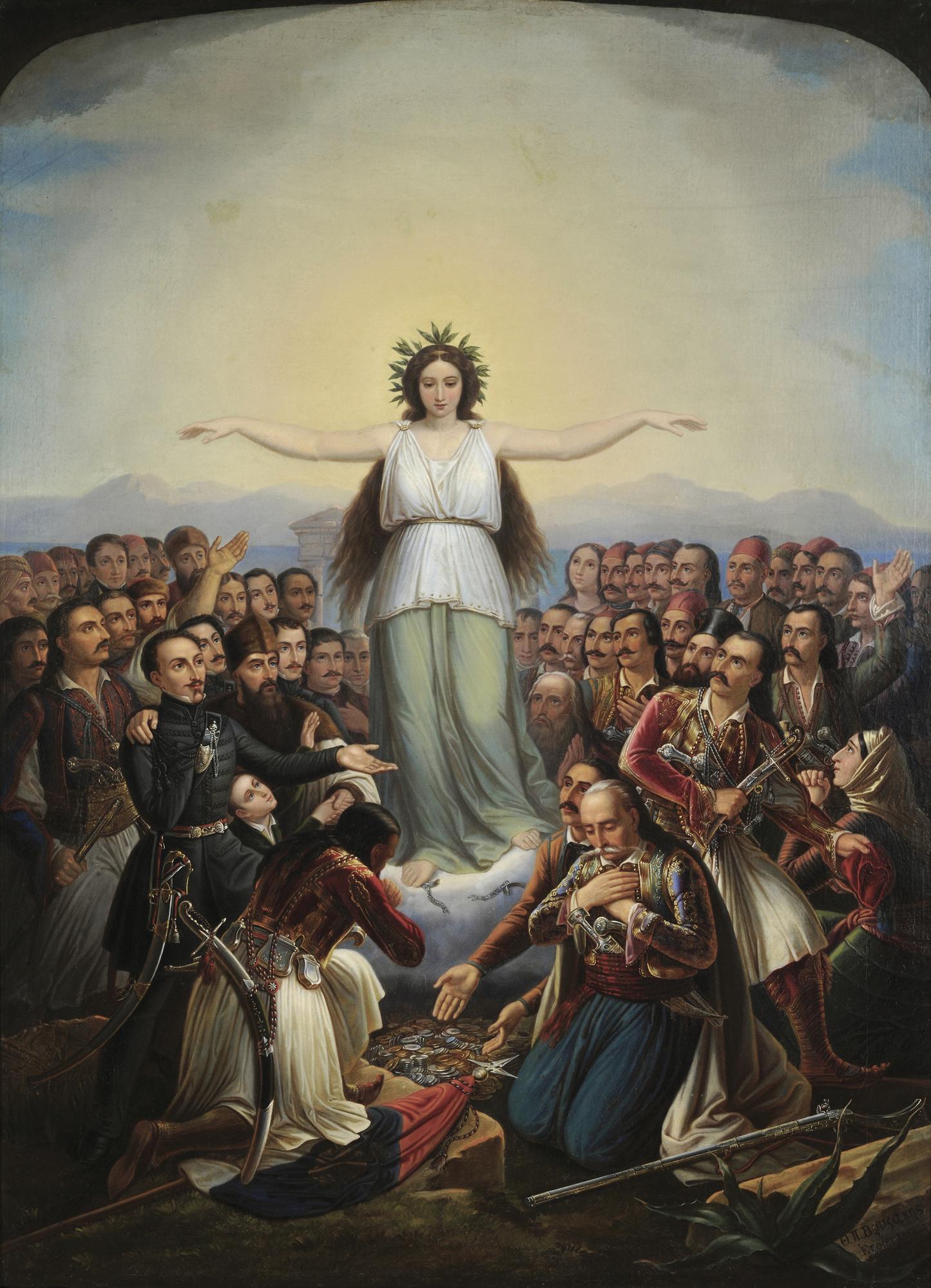 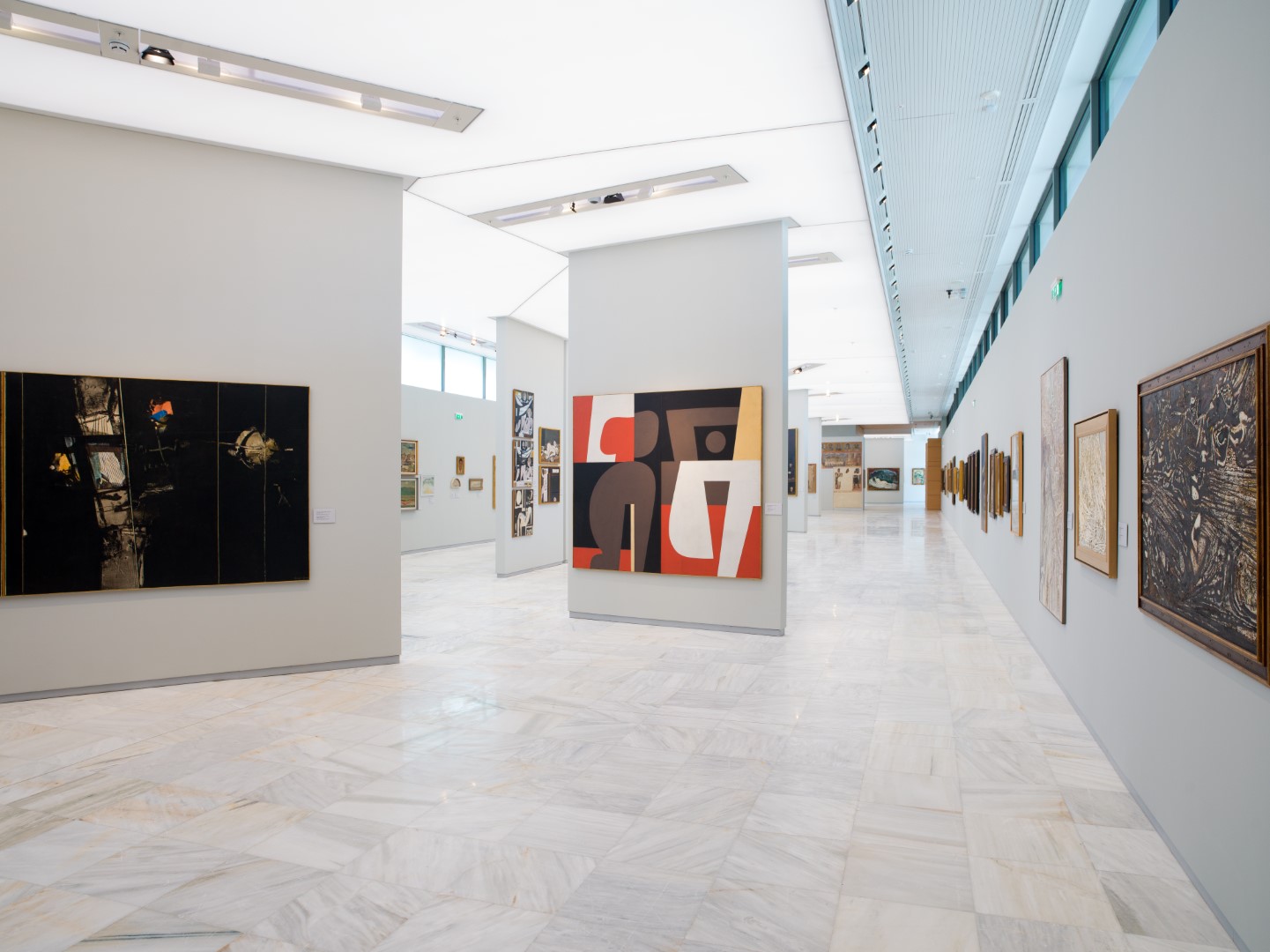 The stunningly refurbished National Gallery of Athens is a must for art lovers
By nationalgallery.gr 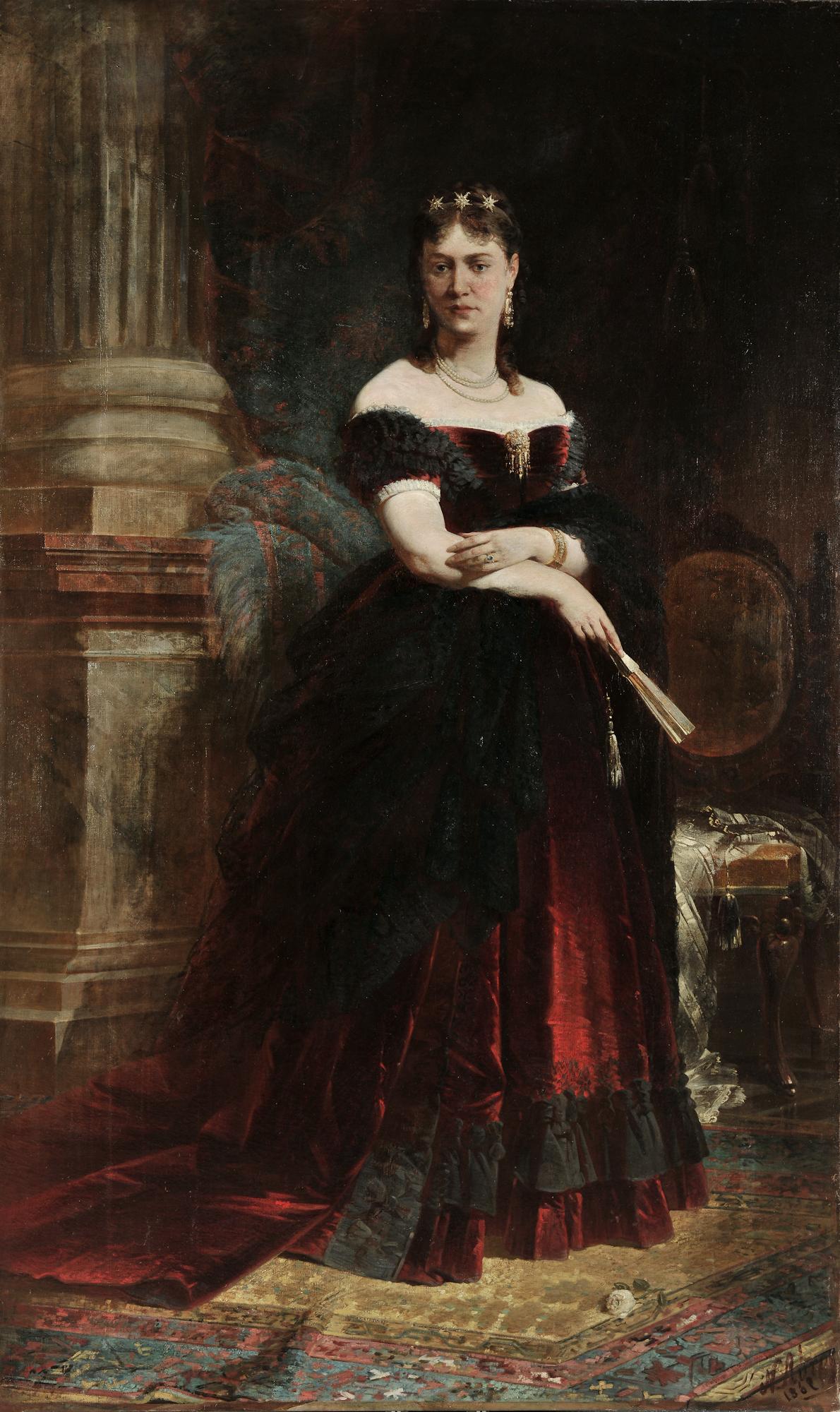 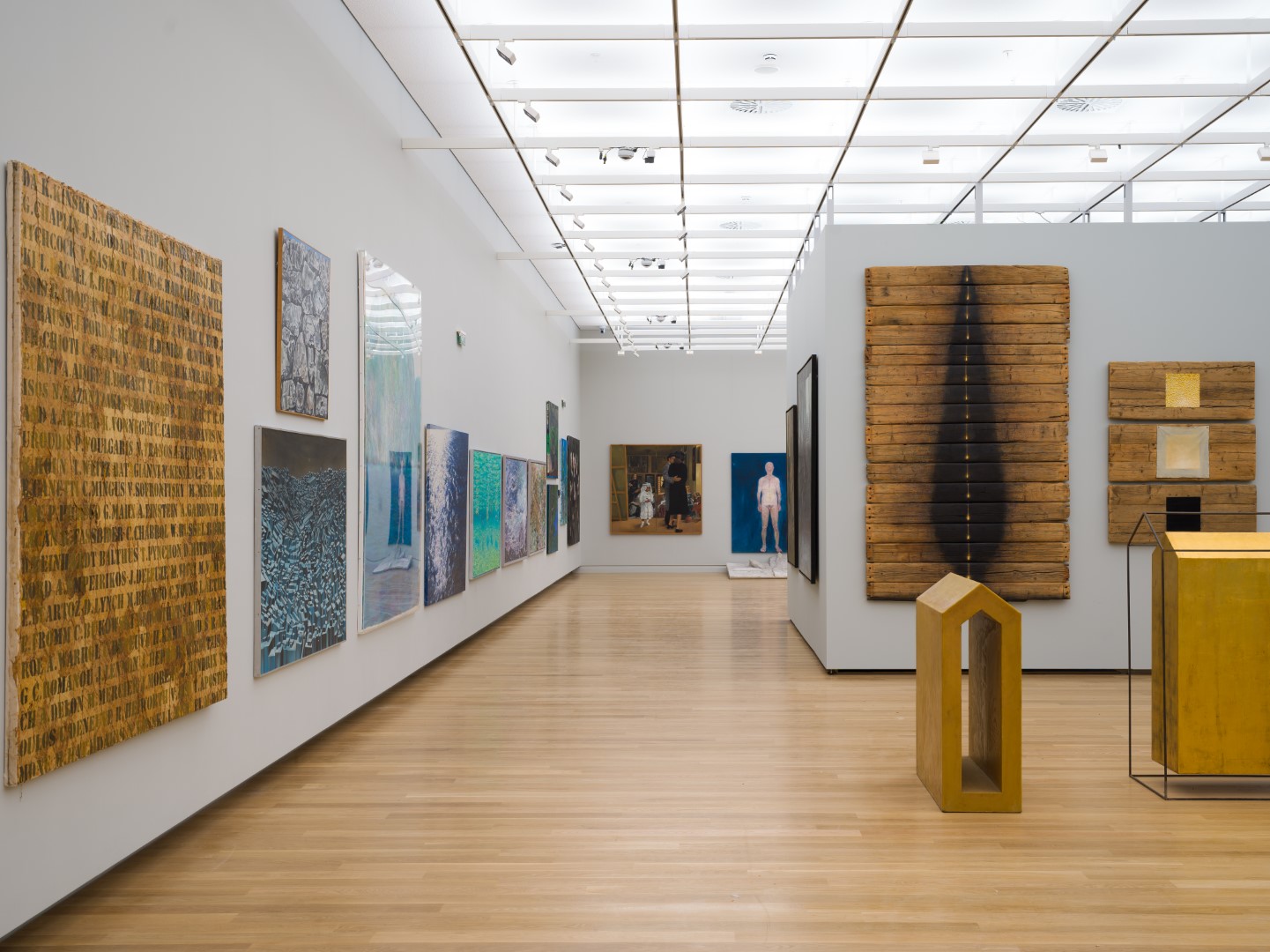 You’ll be introduced to works by the best-known modern Greek painters
By nationalgallery.gr 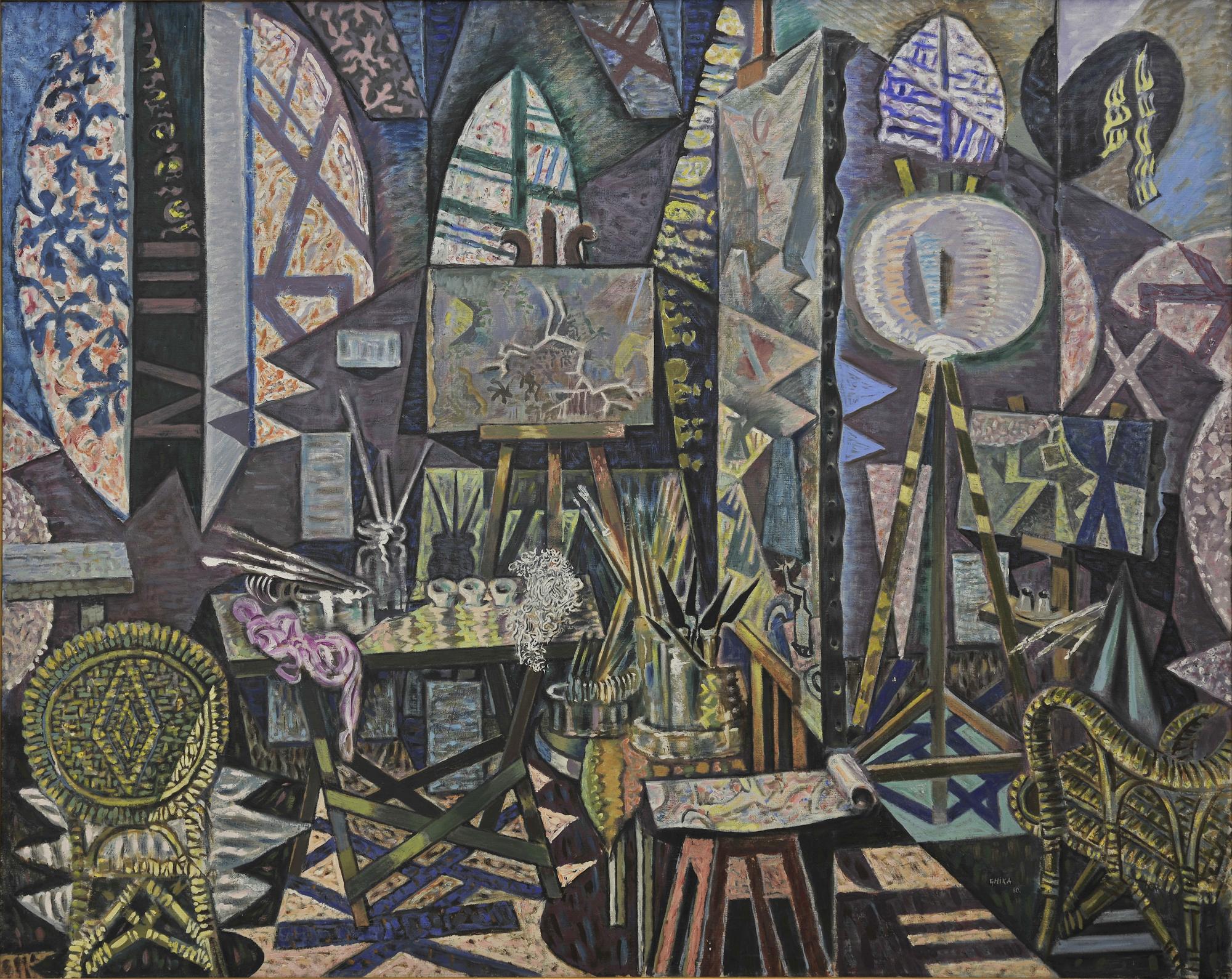 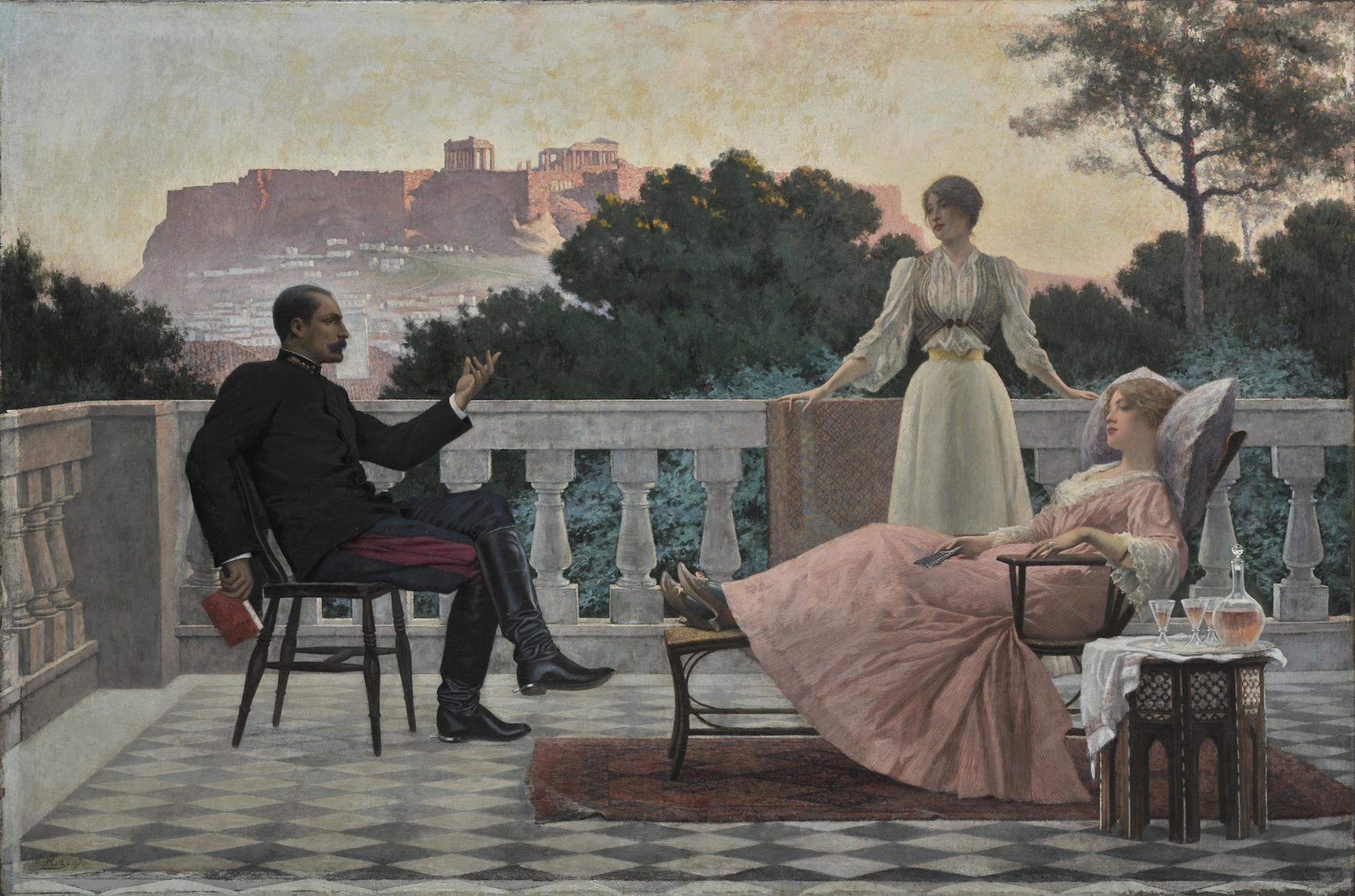 On the Terrace (1897) by Iakovos Rizos
By nationalgallery.gr

The exhibition starts in the museum lobby with a 15m long triptych bursting with the colours, noises, and aromas of a downtown Athens marketplace, painted in the artist’s characteristic post-Impressionistic style. It’s a scene that says that Athens’ National Gallery is open to everyone.

Known as ‘the father of modern Greek painting’, Lytras was a favourite of King Otto and Queen Amalia and his portrait of the royal couple is his defining work. However, it was this larger-the-life portrait of the wife of a Greek industrialist that got him noticed by Athens’ newly formed Bourgeoisie – even more so given the super-opulent gold frame made in France.

Paris-educated Rizos evokes the spirit of the Belle Epoque in this romanticised vision of late-19th-century Athenian aristocrats lounging on a balcony of a neoclassic house in Plaka, with the Acropolis resplendent in the background.

The Betrothal of the Children (1877) by Nikolaos Gyzis

The custom of Greek families engaging young children to be married during Ottoman times (possibly to protect them from the interests of Turks) is represented in this oil painting. The boy looks quizzically at his ring whilst the priest addresses the girl and the families look on in satisfaction.

The theme of this monumental circular oil painting – depicting a mournful Christ wearing a thorny crown – is enhanced by the emotion portrayed in the colours (a spectrum of blues merging with yellow in place of a halo) and eyes gazing up at heaven.

You move on to 1970s pop art next with Yannis Gaitis’ characteristic stylised figures, gathered crowd-like to depict mass consumer society and dressed in the colours of the Greek flag.

This giant wall painting was never intended for public display, having originally lined the wall of the artist’s house. It is painted in a post-Byzantine church style, with sections depicting aspects central to his life, including a Pantheon of figures he admired (Homer, Pythagoras, Herodotus, Plutarch etc), his wife and daughter and depictions of his greatest fears.

The Studio (1960) by Nikos Hatzikyriakos-Ghika

In his idiosyncratic post-cubist style, Ghika gives us an insight into his workspace, including furniture and equipment that were part of his daily life. Not a single space is left unused in a style in part inspired by Picasso.

A number of permanent and temporary exhibits gathered to commemorate the bicentennial anniversary of Greece’s War of Independence against the Ottomans, representing some of the most iconic events and personalities of modern Greek history. Amongst them are Eugène Delacroix’s Episode from the Greek War of Independence, 1856 (showing a mounted soldier on the battlefield, wearing a flowing white ‘foustanella’ kilt, black sash belt and embroidered waistcoat) and The Massacre at Chios, 1824 (capturing the horrors of one of the war’s most brutal episodes).

Theodoros Vryzakis’ paintings include The Exodus from Missolonghi, 1853 (showing fleeing residents under attack by Turks seeking revenge for losing control of the city some months earlier), The Reception of Lord Byron at Missolonghi, 1861 (capturing the arrival of the English romantic poet who lost his life fighting with the Greeks in 1824) and Greece Expressing Gratitude, 1858 (a mythological allegory of the nation, finally liberated). Meanwhile, Nikolaos Gyzis’ After the Destruction of Psara, ca 1869-1898 portrays revolutionary leaders Giorgos Kolokotronis, Alexandros Mavrokordatos and Andreas Miaoulis as well as Bavarian lieutenant and Philhellene Karl Krazeisen.

Group
The afternoon hours are perfect to visit the greatest landmark in Athens. As the crowds have thinned and the summer heat has eased, you'll visit...
Group
Athens' street art scene is one of Europe’s hottest, home to local and international street artists alike. Join us in this alternative art tour with...
EXPLORE ALL

Athens
from 51 €
BOOK NOW
VIEW ALL
Book your trip

How do you get to the National Gallery of Athens?

What is the best time of year to visit Athens?

What are the opening times of the National Gallery of Athens?

How much time do you need at the National Gallery of Athens? 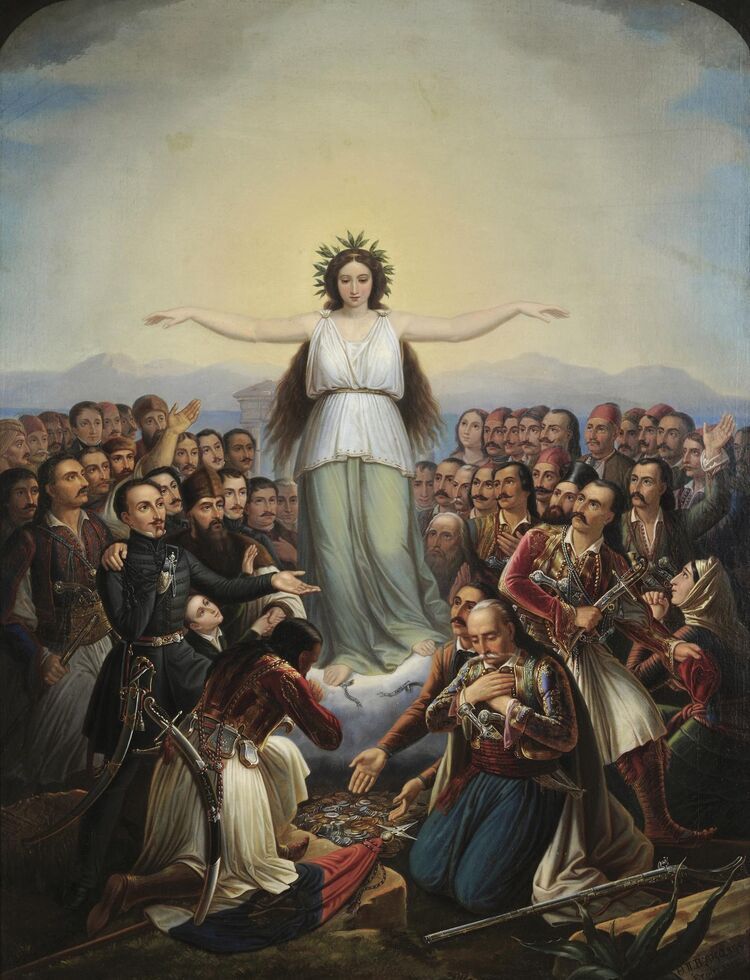 Refrain from touching any remains or monuments. The fingers’ natural oils can be extremely damaging to artefacts.
Use the bins provided or, if need be, take your rubbish with you.
If there’s a “No flash photography” sign, please respect it. It’s to protect the exhibits.
Use a refillable water bottle to try to minimise your use of plastic.
No pets (other than guide dogs) are allowed in cultural sites.
Read More Read Less
DESTINATION