Be transported to the days of colourful mansion houses and simple living on a boat trip to Symi, a tiny island with a grand past and an equally big appetite for life 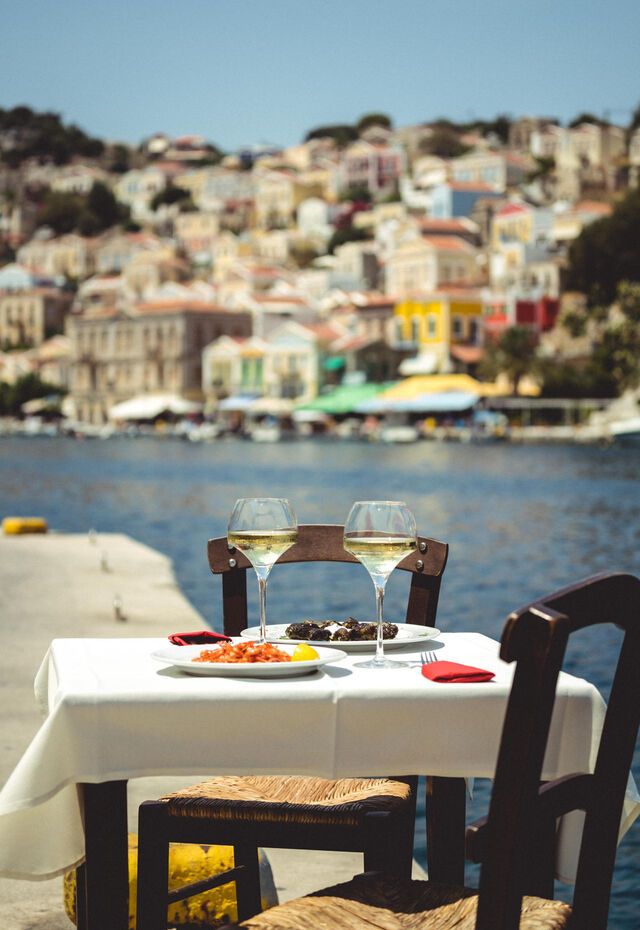 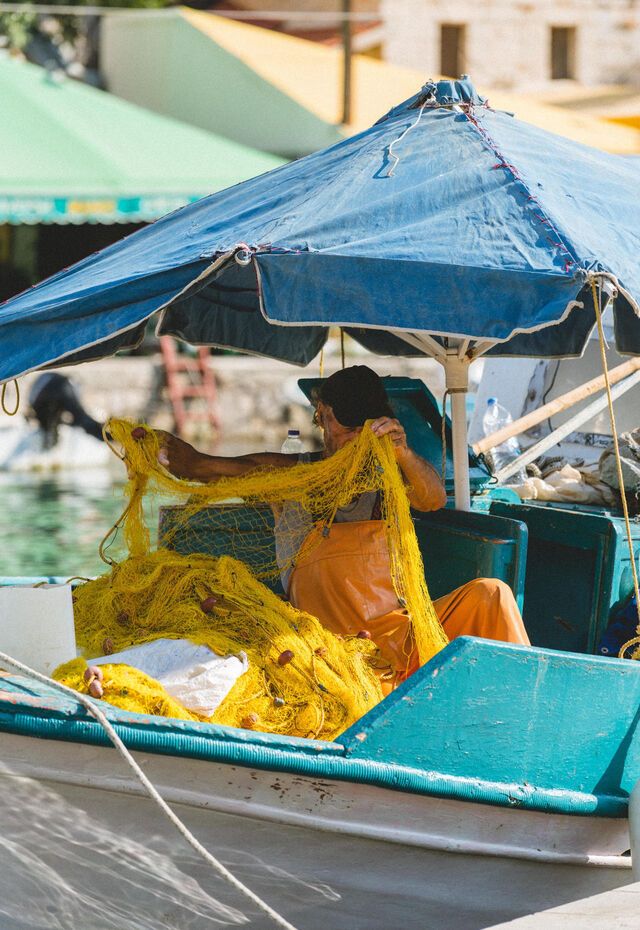 Arriving at Gialos, the main port of Symi, imprints itself into your memory like a photograph. But you’ll have no idea which era the photo was taken in.

There’s an old world grandness to the multicoloured mansion houses in and above the port. So much so that you’re instantly transported to the days when this remote Greek island was awash with the fortunes earned from shipping. Except that back then (at the end of the 19th and beginning of the 20th centuries) some 25,000 people lived here and the island’s famous boatyards produced around 500 new ships a year.

These days, the fishing and sailing boats along the Symi waterfront bob to a different, more relaxed tune. But that hasn’t stopped Symi retaining all its traditions. So taking a boat trip from Rhodes (Symi’s cosmopolitan neighbour) allows you to instantly step into another kind of island charm.

Take a look around you once you arrive at Gialos … at the generously-laid out tavernas and those houses rising theatrically up the hillside towards the upper town. You’ll be gripped by the urge to explore this small Greek island with a big heart. 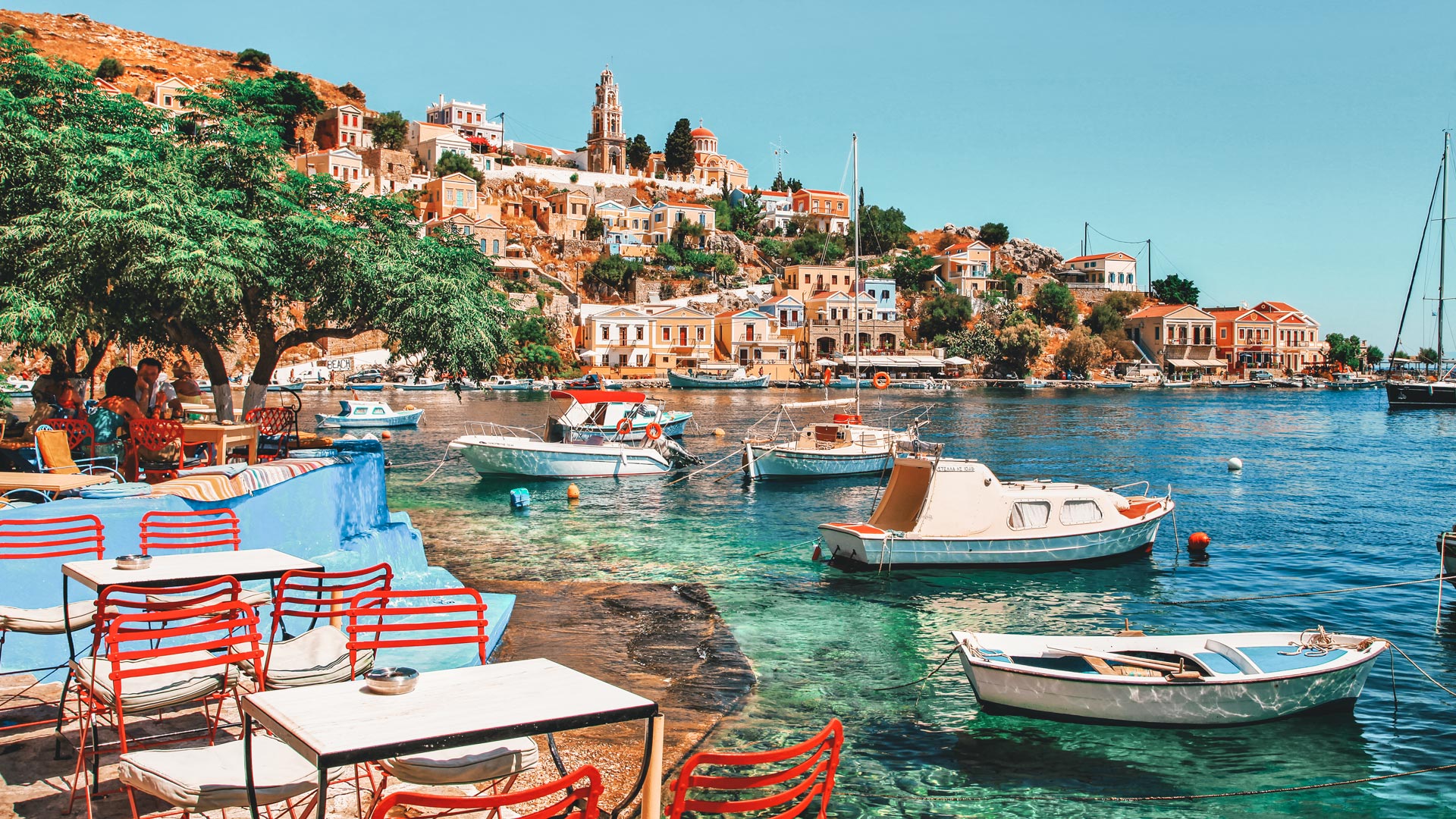 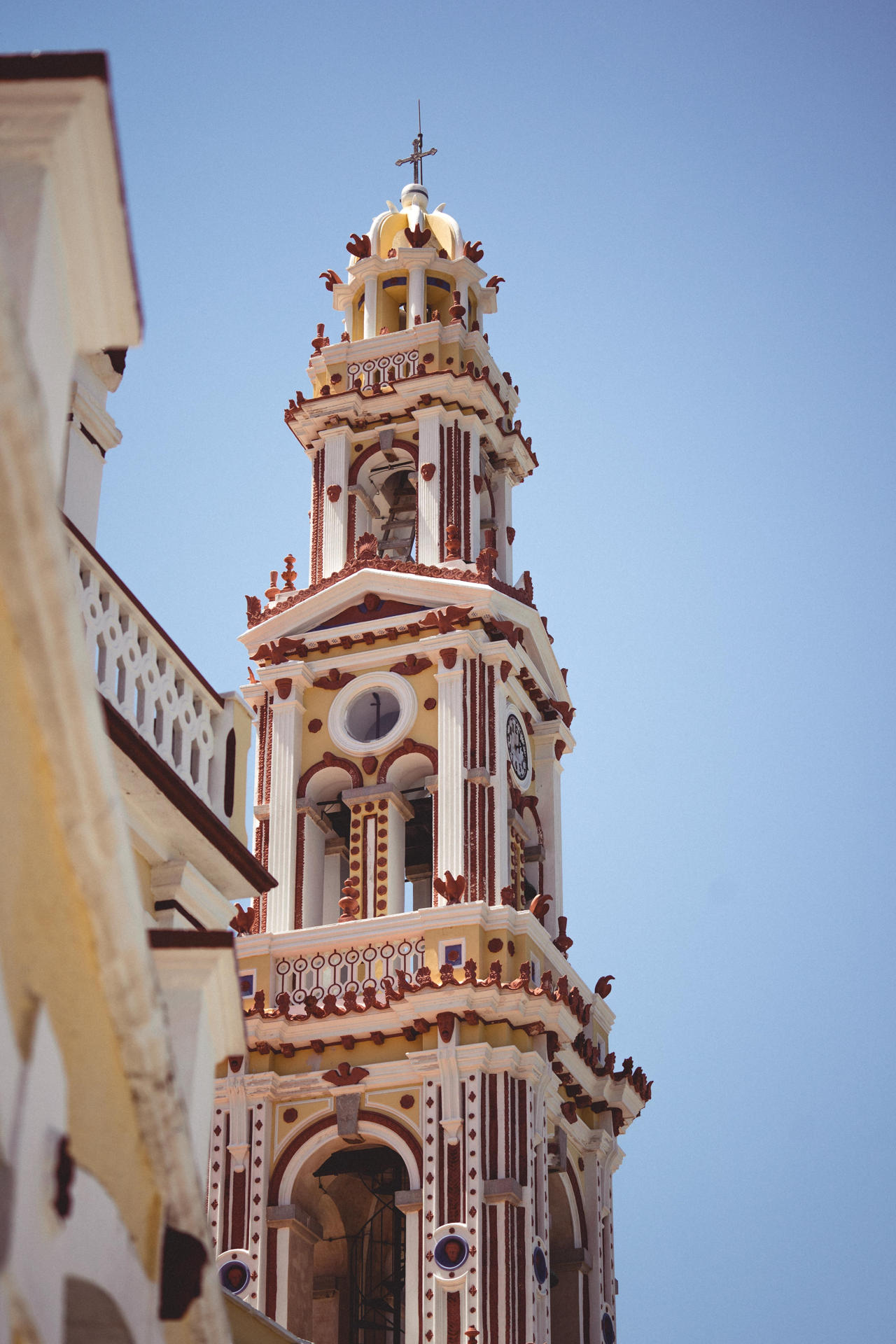 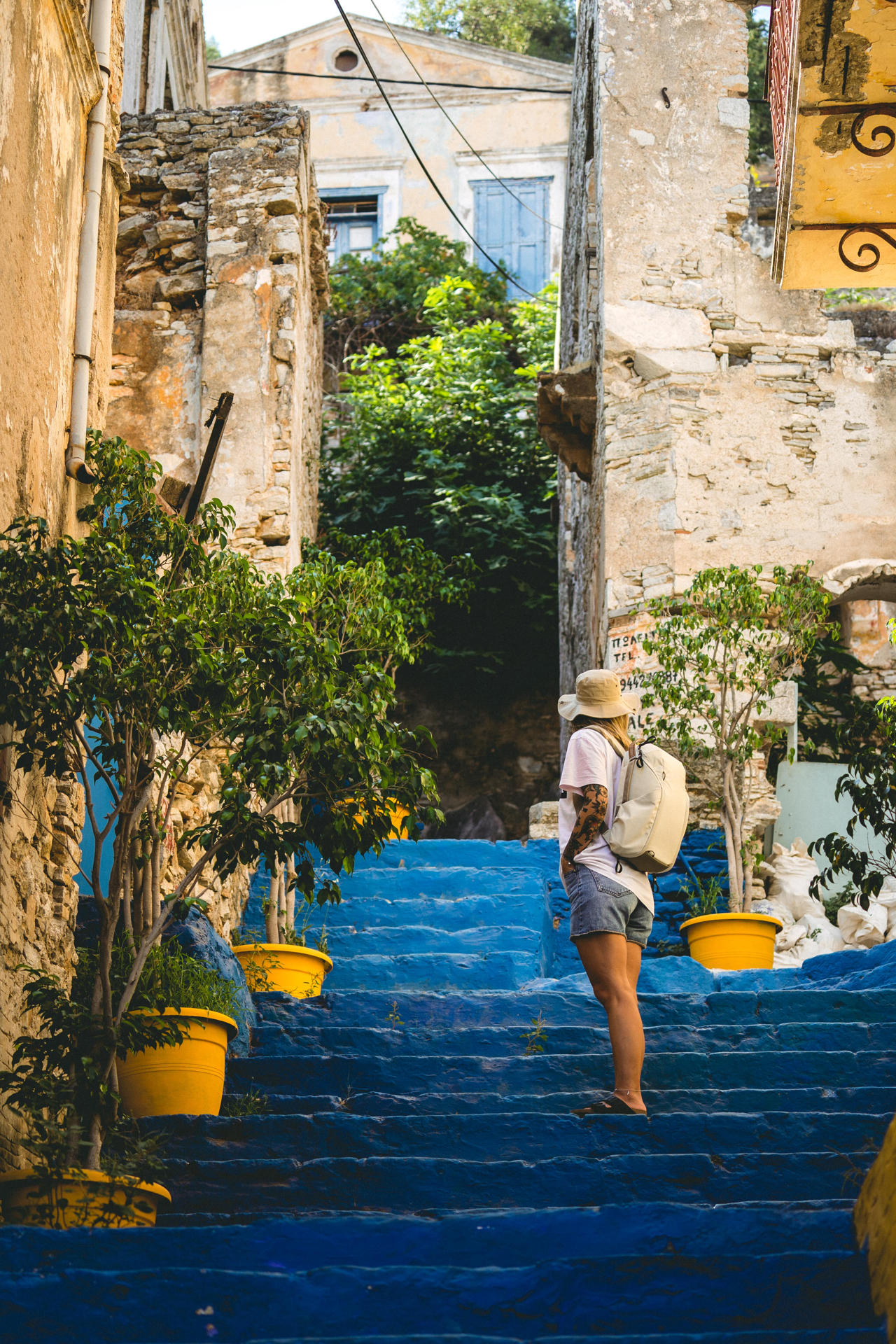 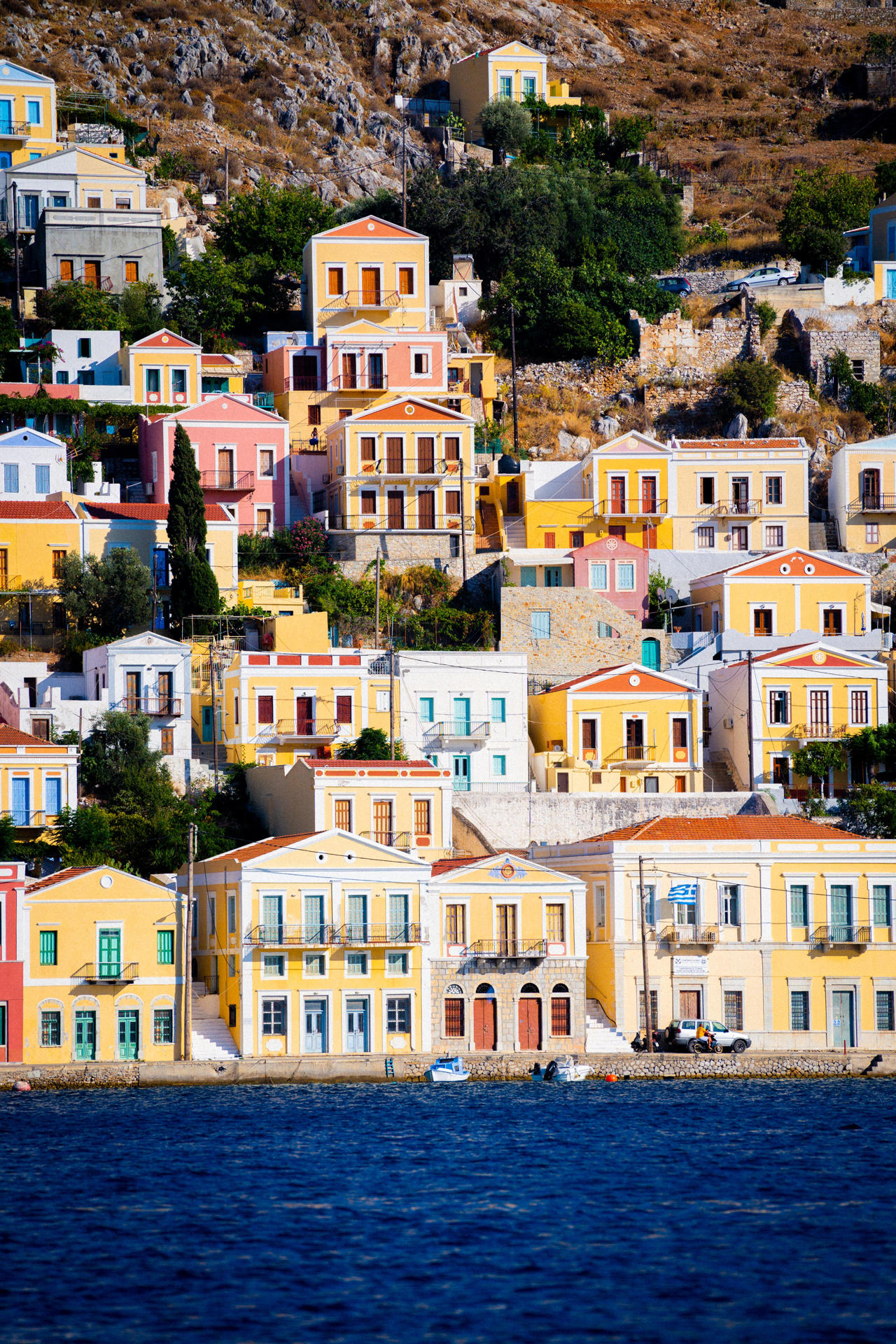 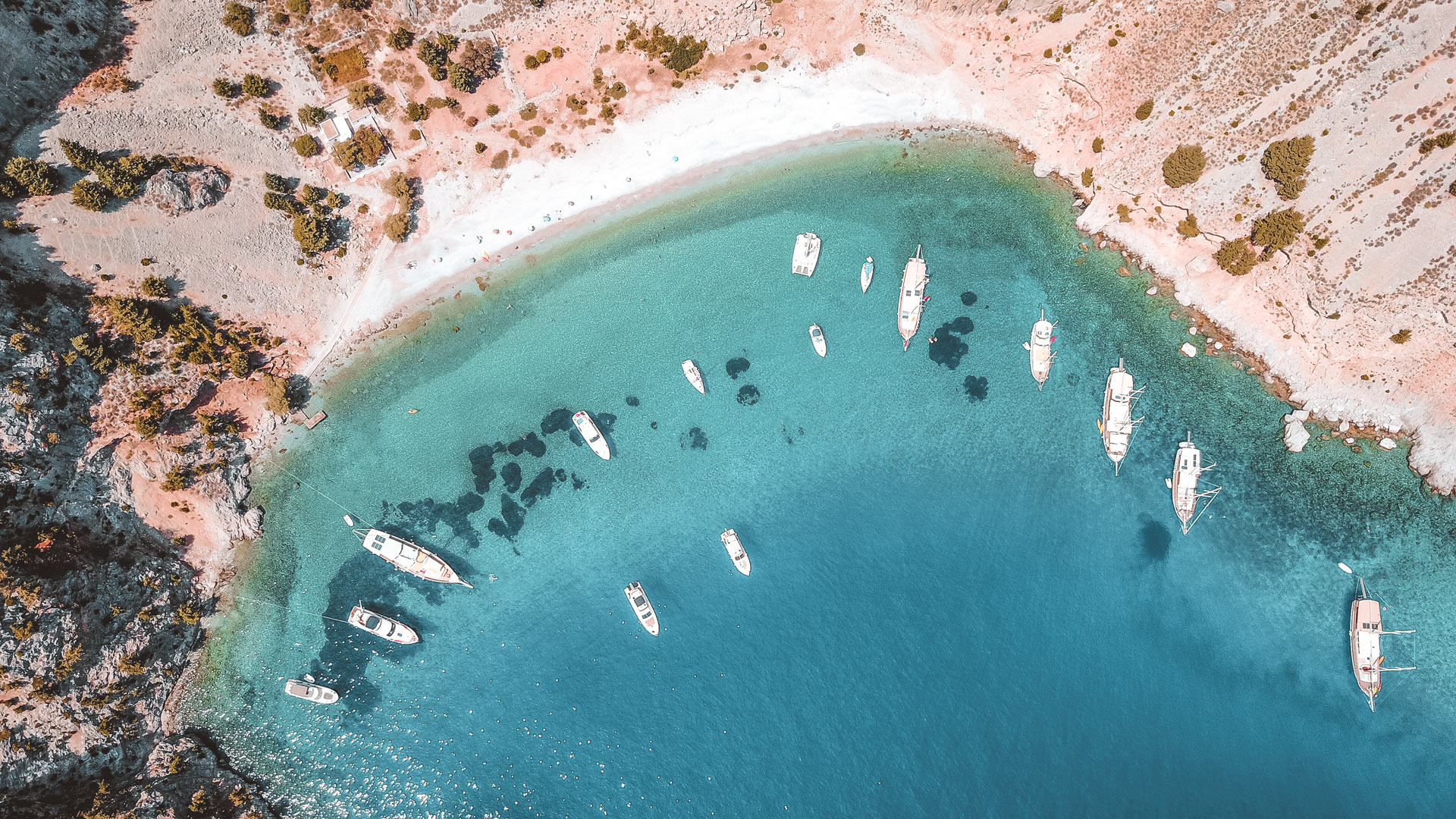 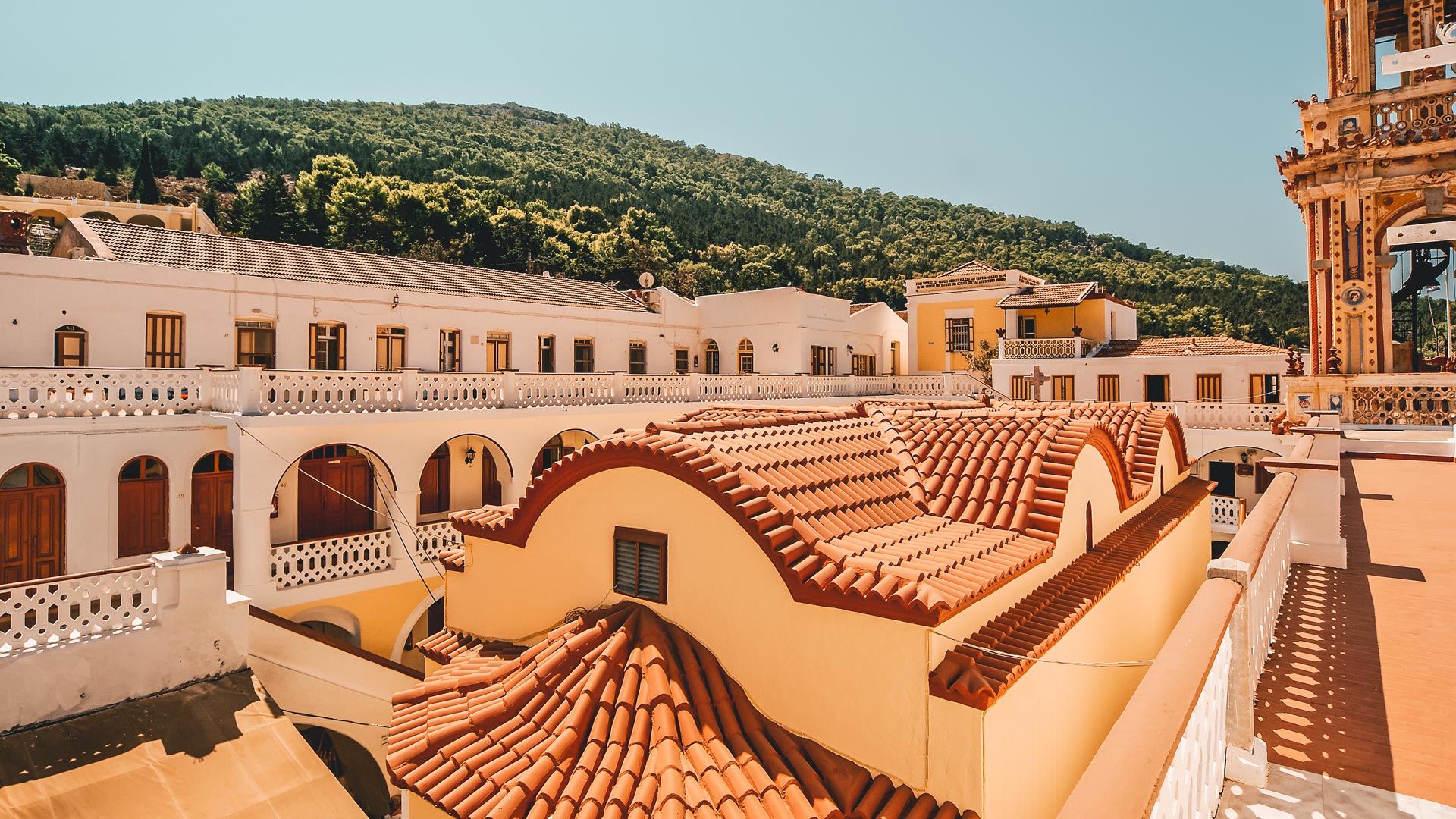 The monastery of the Archangel Michael Panormitis, Symi island 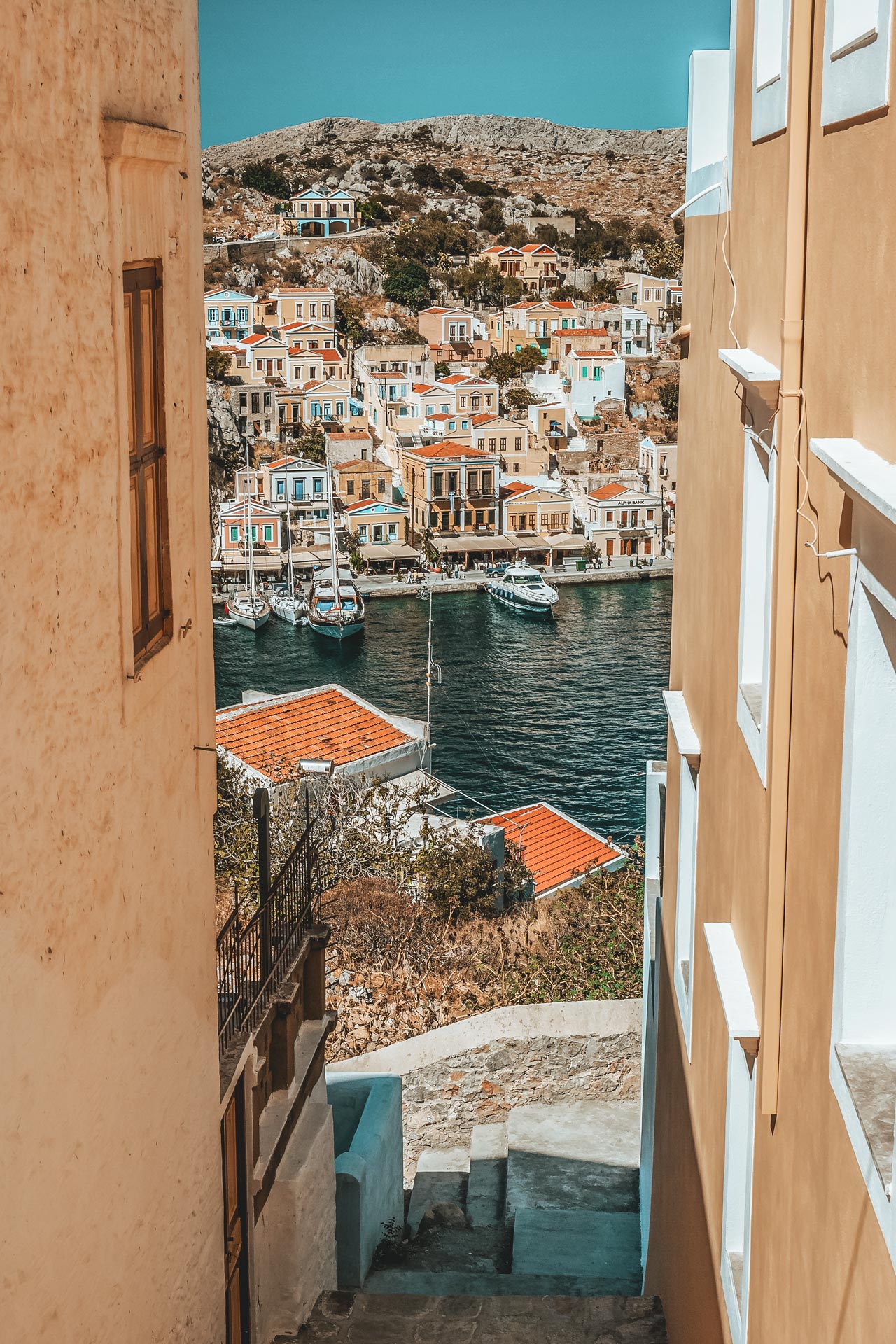 Before you head anywhere else, make sure give the port the time it deserves 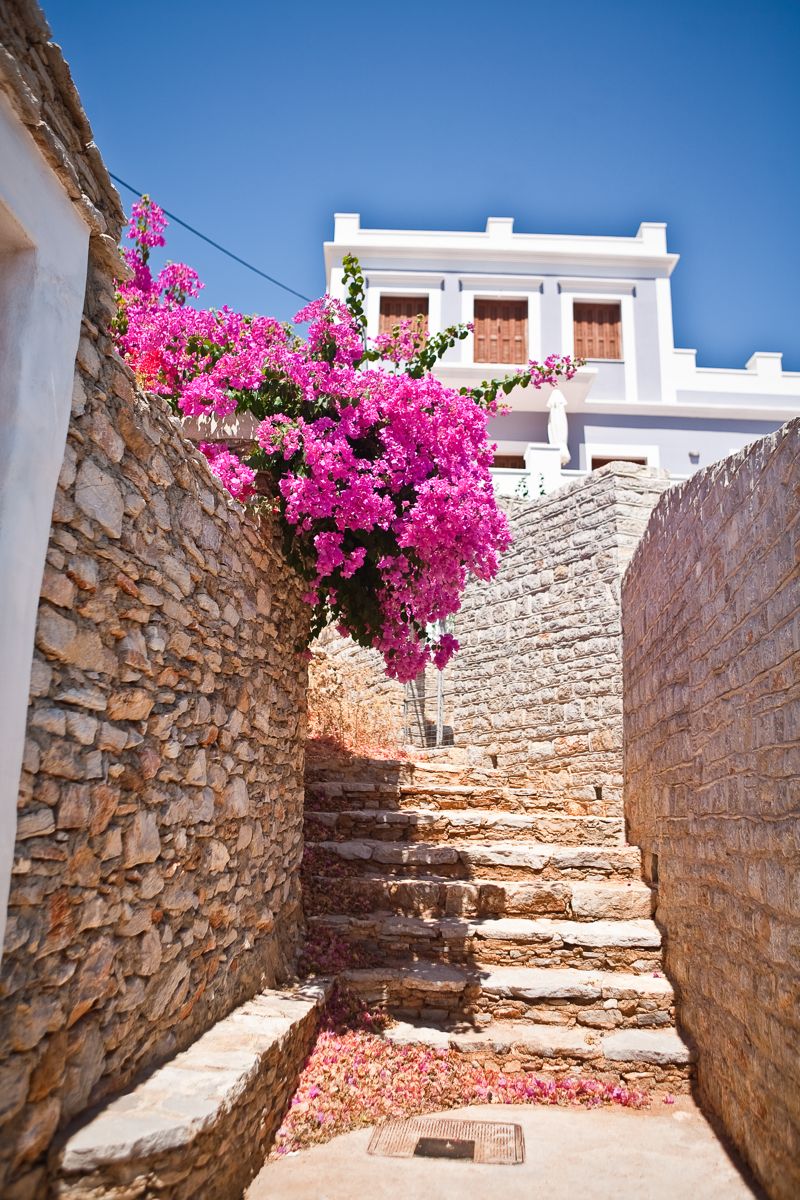 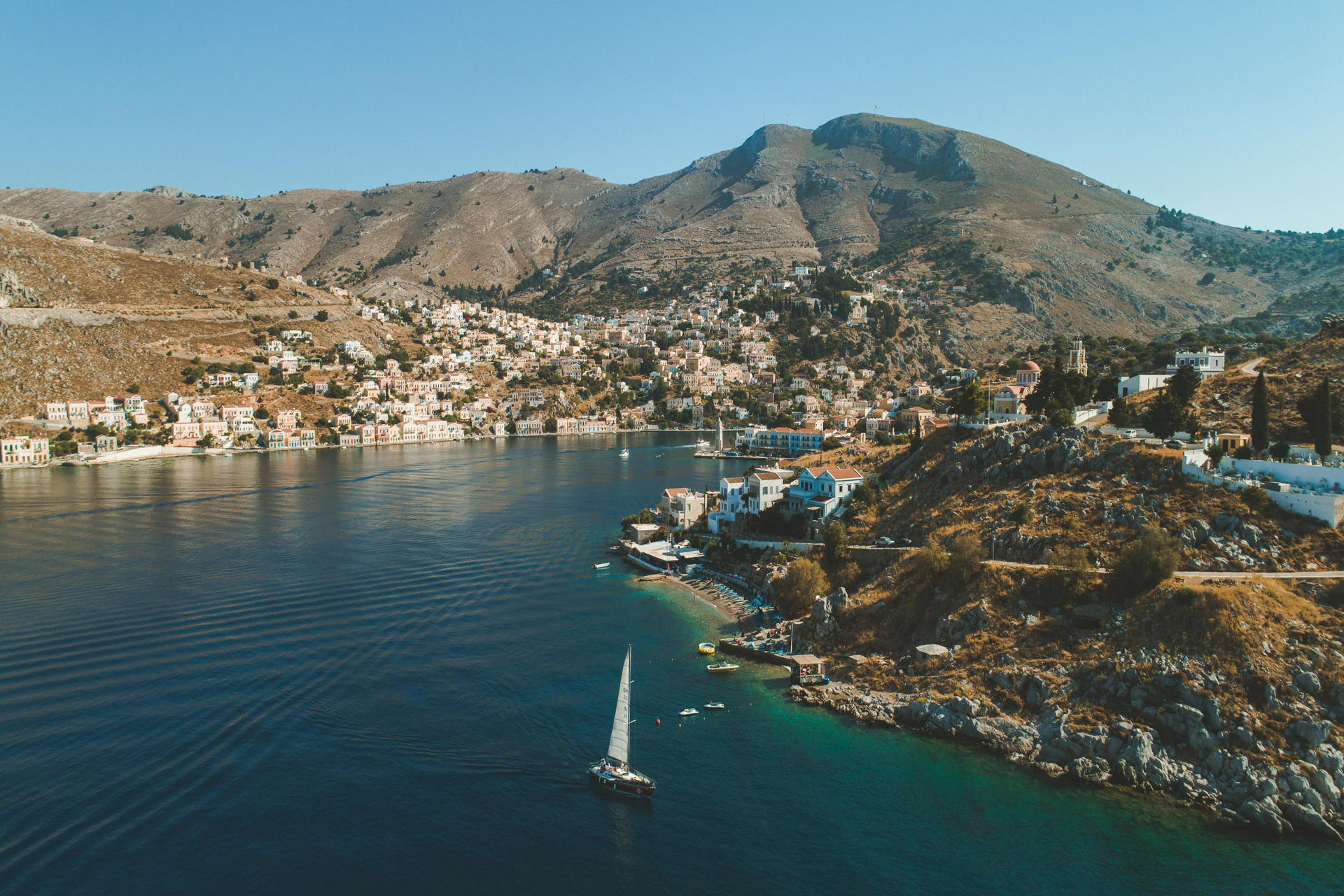 Arriving at Gialos, Symi’s main port imprints itself into your memory like a photograph. 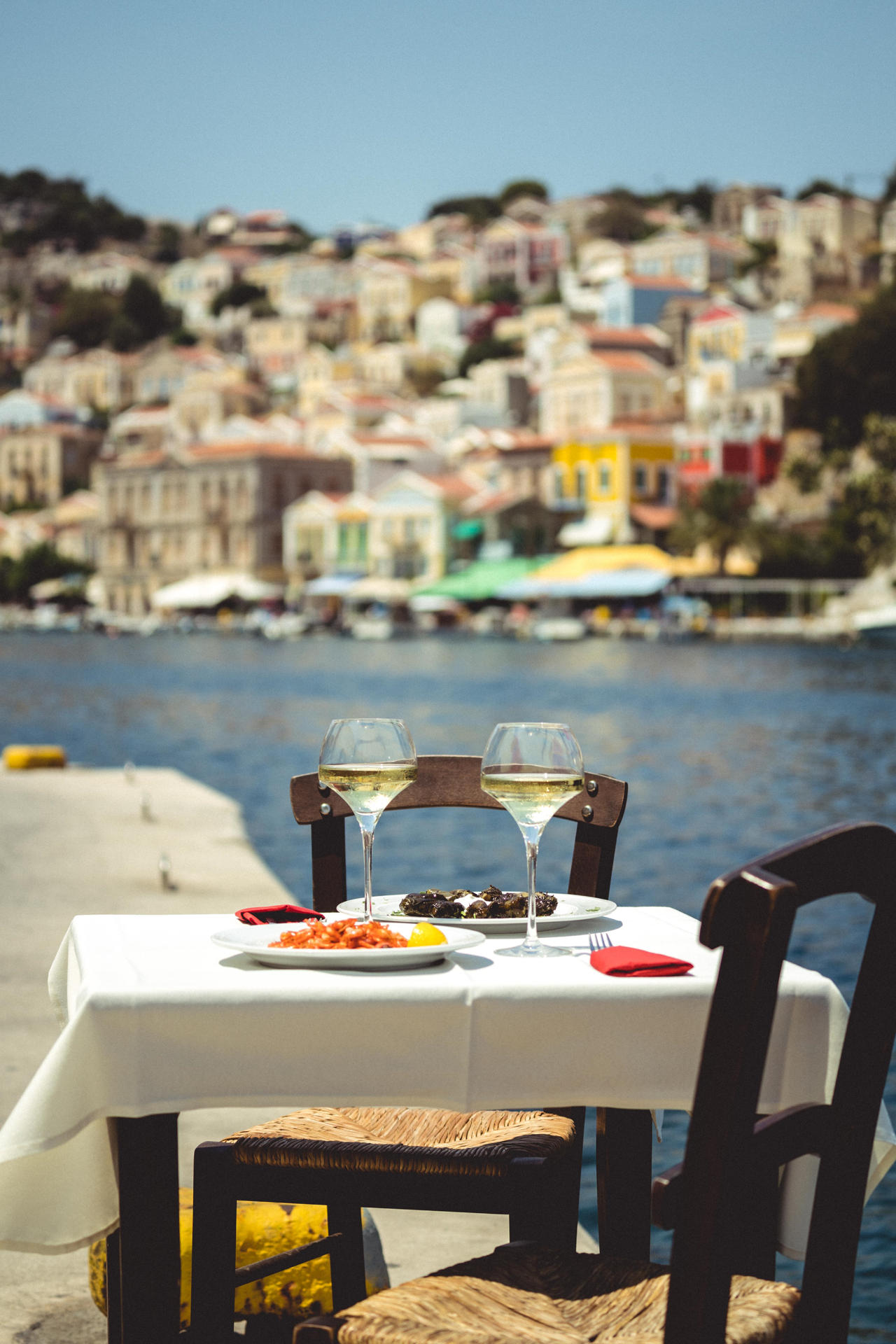 Enjoy the local cuisine by the sea 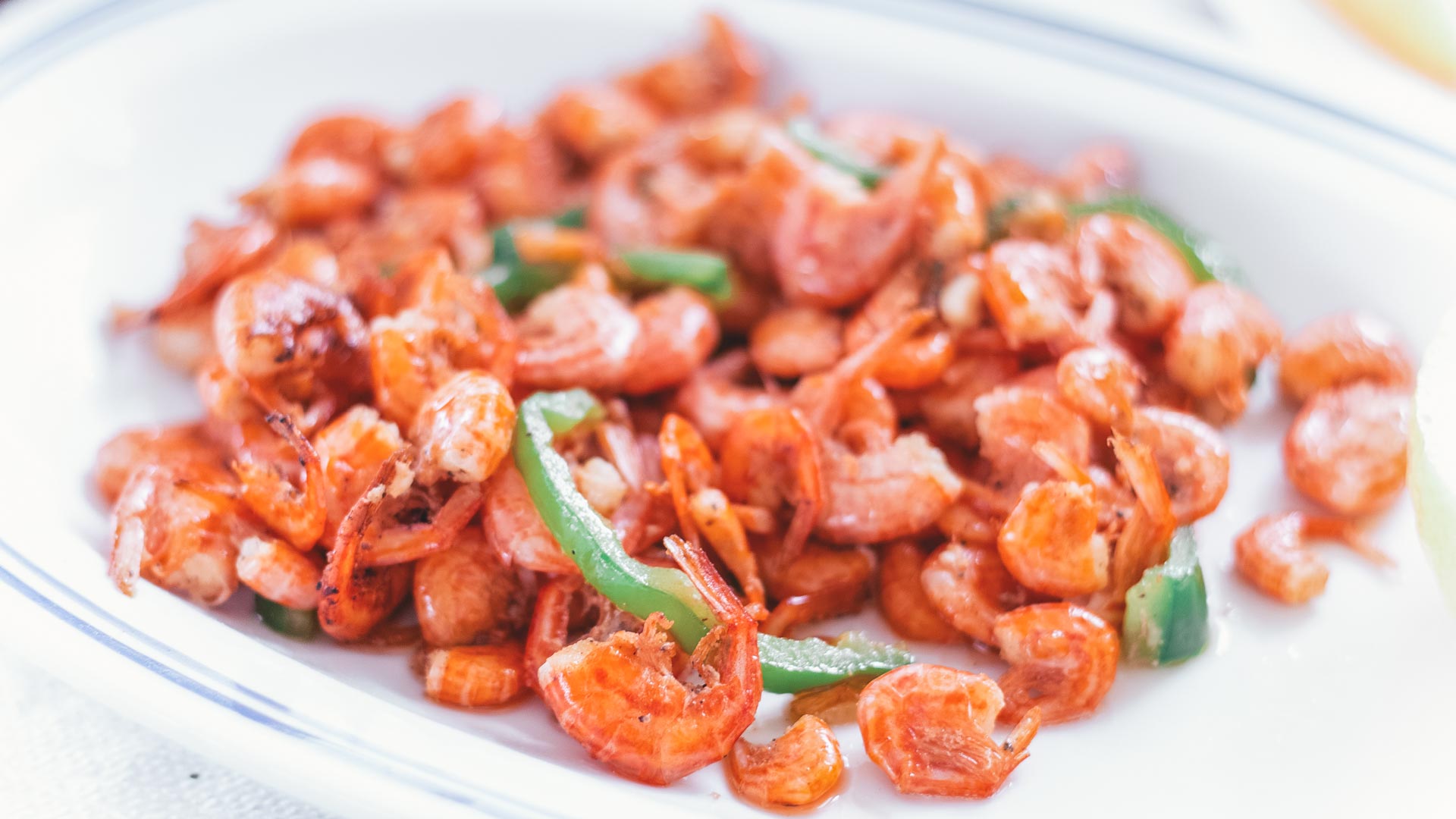 Symi shrimps, the most famous and traditional dish in Symi

Before you head anywhere else, make sure to give Symi’s port the time it deserves. The clocktower and belfry of the church of Panagia Evangelistria stand out. But mostly this is where you can best appreciate the colours and grandeur of the mansion houses rising up the hill.

It’s quite a climb but tackling the 500 stone steps of Kali Strata, connecting the harbour to Ano Symi (Upper Symi), is the best way to explore Gialos. Essentially it’s one long winding staircase, taking you through the lower and upper town, allowing you to enjoy the neoclassical architecture, pebbled courtyards and tiled roofs from every angle. Stop at the shops with local handmade products, or maybe at a bakery or cafe along the way.

The view from the Byzantine Castle

If you’ve got it in you, keep climbing all the way to the Byzantine Castle above town. It was built in the 14th century by the Knights of St John as an expansion to an existing fortification and there are even remains of an ancient citadel up here. The highlight is the view of all the town’s roof-tiled houses and the port of Gialos.

Whether you eat in the port or upper town, you’ll love the food of Symi. There are traditional cafeterias and ouzeries for a coffee and a snack, but you should definitely try a fish taverna by the sea. Symi is legendary for its seafood, especially the prawns. Keep an eye out for atherinopita (seafood pie), handmade pasta and local honey balls called akoumia.

Some boat trips include a stop at the 18th-century monastery in Panormo Bay, which was traditionally a pilgrimage site for seamen. It has two museums (one folklore and one religious) and is famous for its frescoes and wood carvings.

Most boat trips stop for a swim here and it’s not hard to see why. Accessible only by boat, it’s the largest and most impressive beach on Symi, with a massive rockface reaching 300m.

Group
Sea Kayaking Tour -The Pirates’ Route is an unforgettable sea kayaking tour which lasts half a day. Join us to enjoy exploring Rhodes from the...
Group
Lindos Hiking is a day guided hike to the gem of Rhodes, the Acropolis of Lindos.
Group
Explore more of the island of Hippocrates, "Kos" on a semiprivate safari tour for up to 6 persons per vehicle. Travel on unchartered roads through...
EXPLORE ALL
Book your trip

Where do boats for Symi leave from on Rhodes?

The main port of Rhodes:

What is the best way to get around Symi island?

When is the best time to visit Symi?

How long do boat trips to Symi from Rhodes last? 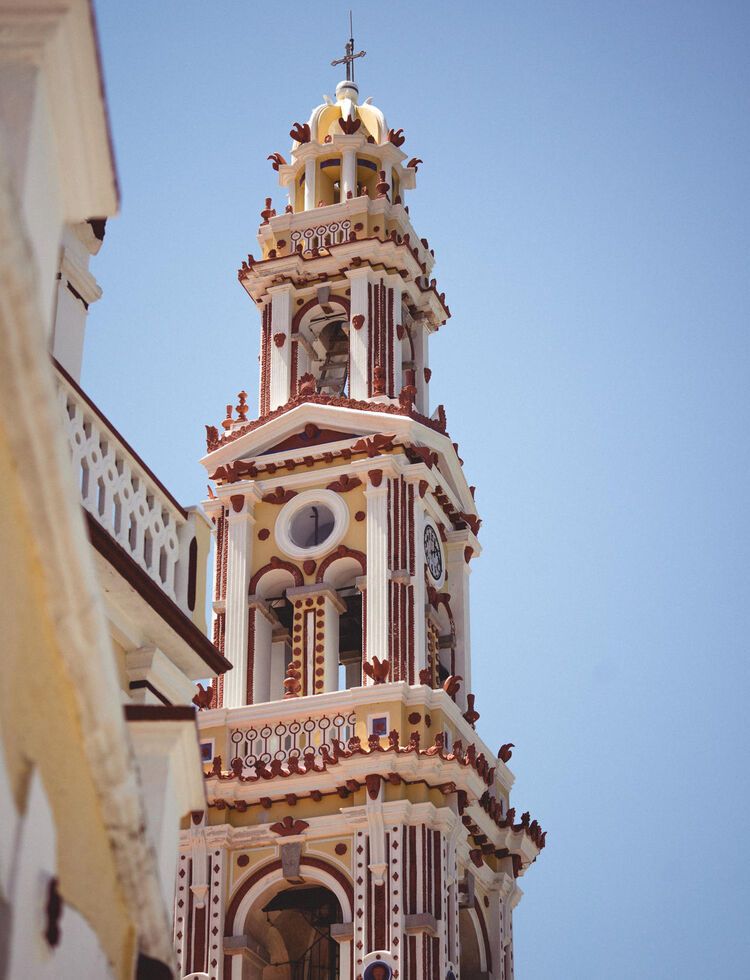 Use the bins provided or, if need be, take your rubbish with you.
Use a refillable water bottle to try to minimise your use of plastic.
Respect the cultural monuments and relics and don’t use flash photography if there’s a sign forbidding it. It’s to protect the relics.
Do your best to support small, independent family-owned stores and local producers, taking home something handmade and local.
Respect the marine life and the plants and animals on shore.
Leave only your footprints on the beach and don’t remove any shells, rocks, fossils or sand.
Making fires on beaches is strictly forbidden.
Be inquisitive and definitely ask the locals for tips.
Read More Read Less
DESTINATION 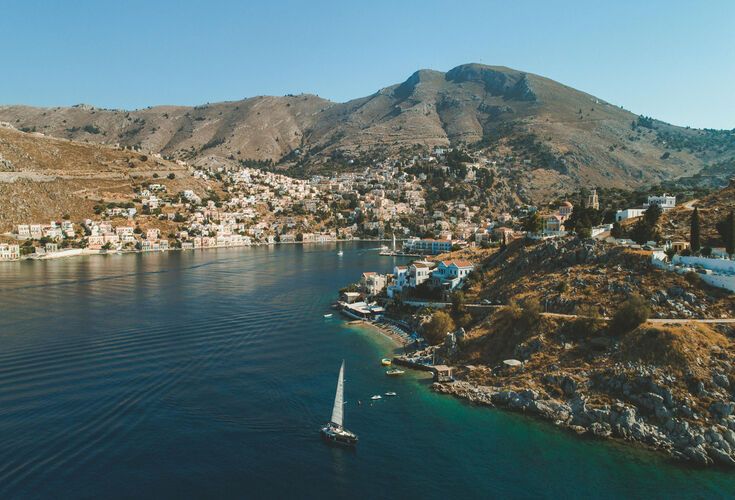