A rare treasure box of surprises in southern Evia 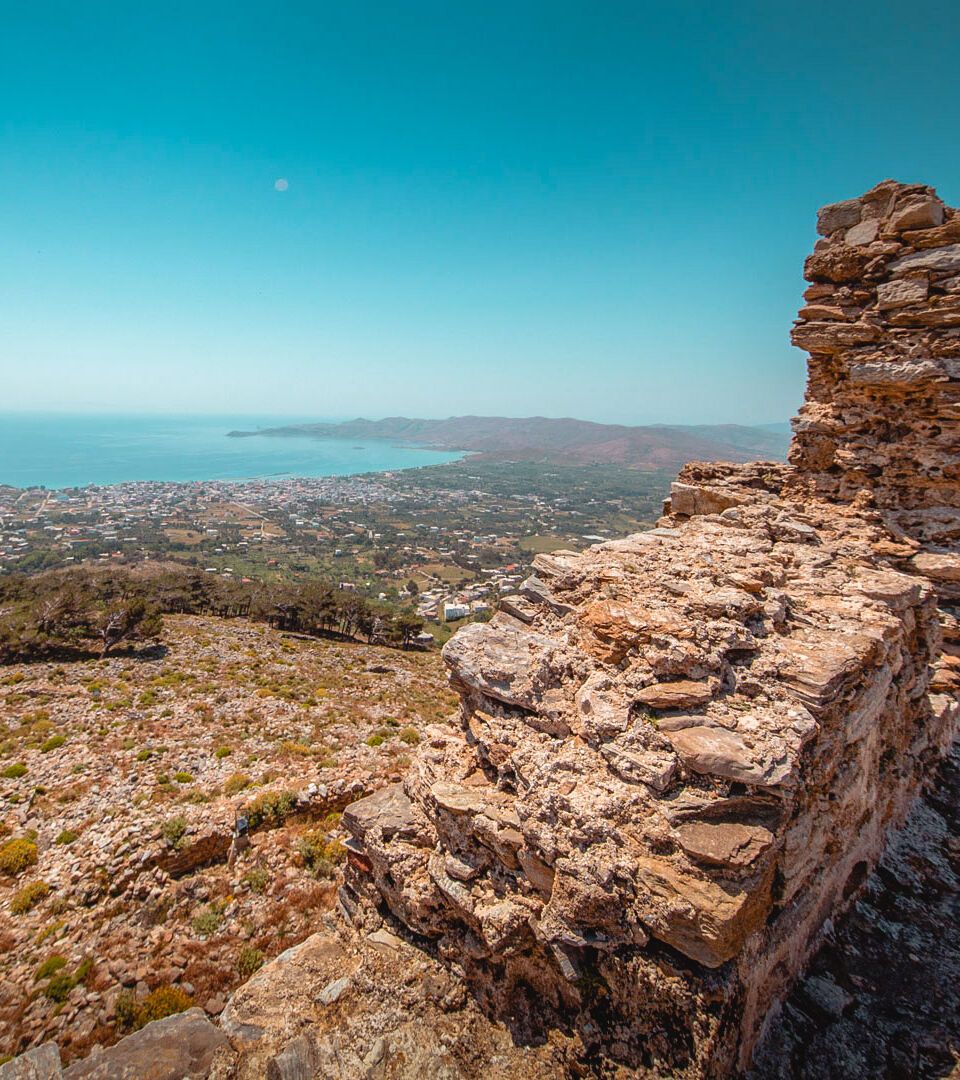 An irresistible combination of mountain, sea and cosmopolitan character render Karystos, on the southern coast of Evia, a perfect place to welcome the summer. This picturesque town is endowed with nature and history and a coastline that alternates between calm sandy shores and wild rocky bays. Close to Athens, Karystos can easily be reached by ferry from Rafina or Agia Marina (in northern Attica) to Marmari or Nea Styra in southern Evia.

Things to do in Karystos

Choose between the beaches of southern Evia

If you’re looking for carefree fun in the sun, then Karystos is for you. Endless sparkling sandy shores on the southern coast of Evia, as well as hidden little coves, are ideal for swimming, snorkelling, surfing, kite-surfing, fishing, sailing or plain and simple seaside fun. Enjoy the water at Megali Ammos, Giannitsi, Archampoli and Agios Dimitrios. There are also short boat excursions from Karystos and, if you like scuba diving, the usually calm Karystos Gulf is made for observing aquatic life.

Enjoy the neoclassical air of Karystos

Karystos is indebted to the Bavarian engineer Mirbach, under commission from King Otto, for its impressive town planning. With neoclassical buildings, beautiful squares and wide streets, it lends itself to early evening strolls. Before that, dedicate an afternoon to seeing Bourgi, the 13th-century Venetian tower that is part of Evia’s rich history. Also, the extensive Giokaleio Foundation Library is well worth a visit, not least because it is home to the Archaeological Museum of Karystos, with exhibits ranging from prehistoric to Roman times.

After your cultural tour, a stroll along the Karystos harbour will be just the thing. Walk down to the seafront to one of the numerous restaurants or bars. As for your accommodation, you can choose between luxury hotels or rented rooms.

One of the imposing mountains of Evia, Mt Ohi rises behind Karystos. A landscape of exceptional beauty with rare fragrant flora, it presents a delightful challenge for hikers. At its foot, you will see the imposing Castello Roso, built at the beginning of the 13th century. From Myli, a village with lush vegetation and running spring water, you can walk to the Roman Quarries or begin the ascent to the mysterious Drakospita (dragon houses), megalithic buildings dating from the 6th to 2nd century BC. Legend says they were built by dragons.

The most impressive drakospito of all is at the summit of Mt Ohi. The stone lintel above its entrance weighs about 10 tonnes. The question of how it was raised and its purpose are mysteries. Once you’ve come up with a theory of your own, you can carry on hiking to the Dimosari Gorge, one of the most beautiful canyons in Evia. In the heart of the gorge, the ponds and small waterfalls are an inviting prospect to cool off from your trek.

And Mt Ohi has another surprise in store, especially for those with linguistic or anthropological interests – Adia village, where the older inhabitants still speak the language of whistles. It is a rare form of communication born out of the need of the villagers to talk to each other across mountaintops. The language is slowly disappearing, so you could be one of the last to hear it before it is consigned to history.

Be spoilt for choice with tasty treats

Gastronomically speaking, southern Evia stubbornly refuses to decide whether it belongs to mainland Greece or the Cyclades. And there’s only one winner of this culinary conflict… you! The outcome is unequivocally delicious. In the numerous tavernas of Karystos and the nearby villages, you will sample seafood regarded as among the best in Greece. However, of equal reputation are the traditional goat casseroles, vegetable pies, cockerel in red sauce accompanied by kourkoubines (the local handmade pasta) as well the local cheese, traditionally associated with the mainland. Indulge yourself in its delectable dishes and raise a glass of ouzo or Karystos wine to a place of unexpected treasures.

#discovergreece
See the gallery
In the numerous taverns of Karystos and the nearby villages you will sample local food famed as the best in Greece
At it's foot you will see the imposing Castello Roso, built at the beginning of the 13th century
Secret views from the medieval castle of Karystos
Vineyards under the Castello Roso, Karystos
Mysterious drakospita, Dragon houses dating from the 6th to the 2nd century BC
Karystos
Steeped in glorious mystery. Castello Rosso, Karystos
Fishing boats in the port. Karystos
Monument to the “Unknown Sailor”. Karystos
Boat ride at sunset. Karystos
Hiking is cool in Kastanologgos. Karystos
DESTINATION