22.02.2017
Karpenisi, a town in the heart of Central Greece, built at the foot of Mt Velouhi
READING TIME
As long as it takes to drink a Greek coffee
AUTHOR
Manos Lianopoulos
Entrepreneur & traveller

Karpenisi, a town in the heart of Central Greece, built at the foot of Mt Velouhi. It constitutes the ideal springboard for you to discover the natural beauty of the area and explore all its wonderful villages and hamlets. As the capital of the prefecture of Evrytania, it definitely has a lot of experiences to offer, making it a favourite among tourists of all kinds.

During the summer months it is visited by hikers and climbers because the area boasts a number of impressive mountain peaks and river valleys, which lend themselves to such activity. Besides this, it has a special attraction during winter since 11km to the north lies the Ski Centre of Velouhi, possessing no less than 18 skiing pistes.

But now I would like to turn my attention south of Karpenisi and take you on a trail through a few of those wonderful villages, each in its own way a paean to the great traditions of the region.

The first village, just 5 km from the town, is Koryshades. This picturesque stone built hamlet of 44 residents, with a proud legacy, touched my heart in so many ways. The spacious square, gorgeous houses and well-tended little shops create a very beautiful atmosphere. It was here during World War Two, after a secret vote by representatives from most of Greece, that the National Council of Free Greece was created. 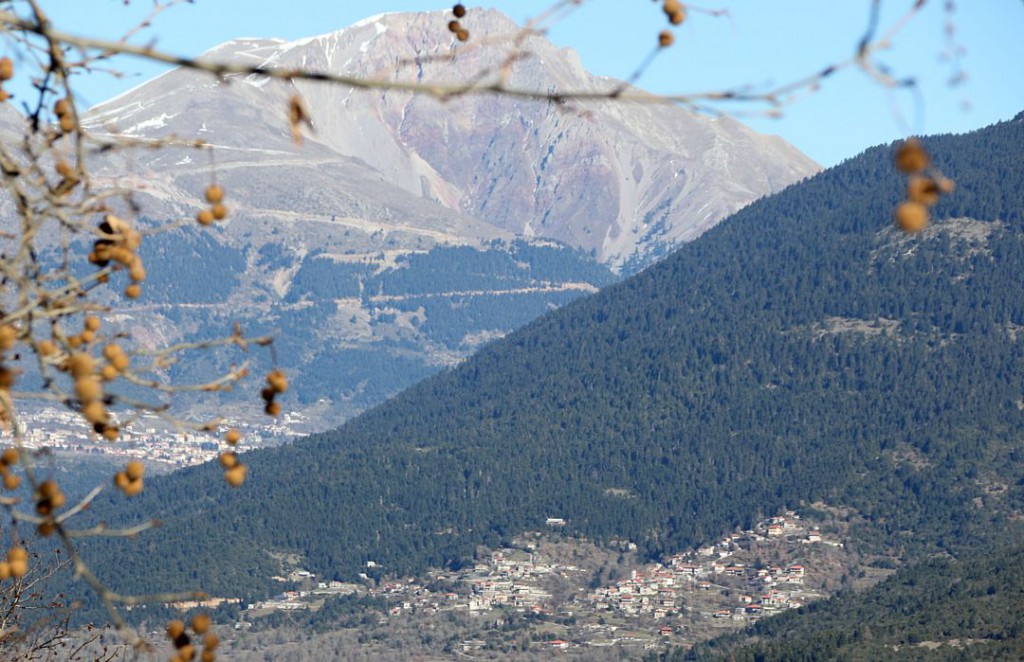 Continuing south, the village of Klafsi lies to the left of the main road. It is particularly picturesque and quiet, with a pretty little square, a traditional café and fine taverns which, it seems, are something of a culinary magnet for people from all around the area. Its name comes from the Greek word for crying and, according to folklore, this can be attributed to the tears shed after a terrible disaster that befell its residents.

14 km further south, you will come across Megalo Horio, a famous tourist destination of the area. And there is good reason for this. The well preserved stone stately homes set against the mountain backdrop make a picture-perfect composition. It is a historic village too, since it served as the meeting point for the liberation forces during the 1821 revolution. At an altitude of 720 m on the slopes of Mt Kaliakouda, it is well worth visiting and having a cup of coffee in the square, enjoying the view to the summit of Helidona.

Directly opposite lies Mikro Horio, at an altitude of 950m on the slopes of Mt Helidona. During the German occupation it was a focal point for the National Resistance, and paid dearly for its role as it was burnt down three times by the Italians and the Germans. A large part of its population abandoned it in 1963 when it was partly destroyed by big landslides on the northwest slope, causing the deaths of 13 residents. Undaunted by this catastrophe, its people built Neo Mikro Horio, a bit further down, by the river Karpenisiotis. 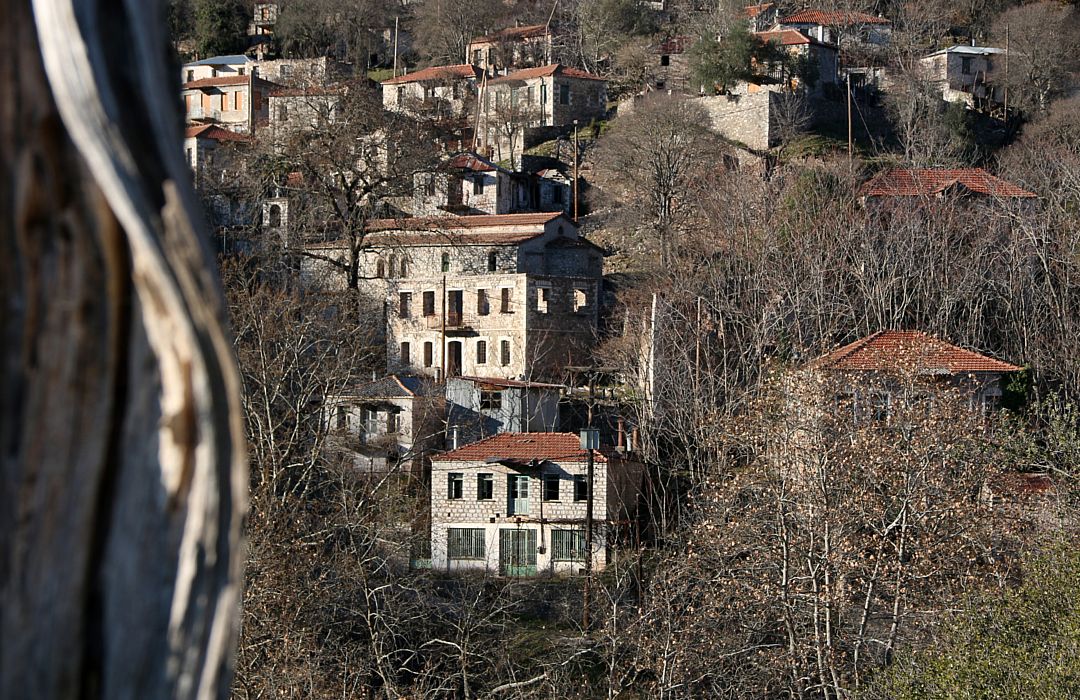 About 10 km south, a short distance from Proussos village, lies the Monastery of Panagia Prousiotissa; a spiritual fulcrum and a pilgrimage site for the whole area. It is located in a craggy, rocky area covered by fir trees.  It was traditionally believed the monastery came about its name  in 829 when, during the iconoclasm, monks Dionisios and Timotheos brought the icon of the Virgin Mary here from Proussa in Asia Minor in order to protect it. However, evidence shows that it was founded between the 12th and 14th century. The icon is said to have been painted by Luke the Evangelist and is considered miraculous by the faithful. In the Greek War of Independence, it was the headquarters of Karaiskakis, while a century or so later on August 16th 1944 it was torched by the Germans when they discovered its role in supporting guerrilla resistance.  A lot of relics, sacred vessels, manuscripts and books were destroyed that day but, thankfully, not the precious icon which had been placed in a crypt.

Karpenisi definitely has a lot of experiences to offer, making it a favourite among tourists of all kinds

A longer trip worth making during your stay is to the village of Viniani. It is 36 km northwest of Karpenisi and the route there is very pretty, taking you through a wealth of verdant mountain scenery. Once again, it is a place with a historic tale to tell, with stone houses built on the mountainside and wonderful views. A ghost town now, its empty streets still echo with the great deeds of the past. Considered the capital of Free Greece during the National Resistance, it was here that the Civil Committee for National Liberation, aka “Government of the Mountain”, was founded in March 1944.

Generally speaking, there are a lot of interesting places around Karpenisi and they take several days to explore. In fact, like me, you’ll probably find one visit is not enough to do justice to the multiple year-round attractions of the town and its surrounding area.

Wear your helmet – fasten your safety seat belt and travel with me to the mesmerizing destination of Karpenisi!

My name is Manos, I was born in Athens in 1978 and my job is promoting companies on the web.
Tripment.net is the result of two of my favourite activities: travelling and film making.
In the last few years I have been travelling a lot on my motorcycle and one of my primary aims is to promote the beauty of my country to foreign travellers through tripment.net