Delphi were not chosen randomly in antiquity for the construction of the temple and the oracle of Apollo, neither for their attribute as “navel of the earth”.
View on map
See the gallery

The Archaelogical Site of Delphi​

The archaeological site of Delphi is at 1 km distance from the modern settlement of Delphi on the road between Arachova-Amphissa-Itea. The modern road divides and delimitates the two ancient sanctuaries, namely the Sanctuary of Athena Pronaia to the south and the Sanctuary of Apollo to the north. The sanctuary of Athena Pronaia comprises the Tholos, the temples of Athena and two (at least) treasuries, whereas next to it the impressive gymnasium is situated. Along the sanctuary of Apollo the Sacred Way ran, on both sides of which the Treasuries of the Greek cities were gradually built and ex-votos and monumental sculpted complexes were erected. The Sacred Way ends at the Temple of Apollo, which comprised the Oracle of Delphi in antiquity, whereas the theatre rose above the sacred area. Outside of the sacred precinct public buildings were constructed, such as the Western Portico and the Stadium, the latter situated on the highest point of the archaeological site.

The Museum of Delphi

Οne century after the first inauguration of the museum a new exhibition took place, aiming at the enhancement of some of the exhibits, such as the Charioteer and the gold and ivory statues as well as at the compatibility of the museological approach with the new scholarly conclusions stemming from the ongong study of the objects.

The architectural design was undertaken by A. Tombazis. As Rozina Kolonia, former Ephor of Antiquities of Delphi, notes in the guidebook of the Museum, the exhibits are displayed in a way that they “compose a historical novel, the pages of which run across twelve centuries of history and archaeology: they narrate through museography the political, religious and ´artistic activity of the most renowned sanctuary of paganism and of its oracle.”

The Temple of Apollo

The archaic temple of Apollo was constructed in 510 B.C. with money raised by many Greek cities under the auspices of the Alcmaeonids of Athens. When this temple was destroyed by an earthquake in 373 B.C., the Greek cities collected money again and built the extant temple, which was accomplished in ca 330 B.C. It was a Doric peripteral temple with a vestibule and an opisthodomos distyle in antis. In the cella was situated the statue of the god and the omphalos (navel of the earth), whereas in the vestibule were inscribed the Delphic maxims of the seven wise men of Ancient Greece.

The Temple of Athena Pronaia

The temple of Athena Pronaia had three phases. The earlier temples (A and B) were built in the 7th and 6th centuries B.C. respectively and were made of poros stone, whereas the third one was built in the 4th century B.C. of limestone. The latter was a prostyle in antis with six columns on the facade, with a cella and vestibule, but without decoration on the metopes and pediments. 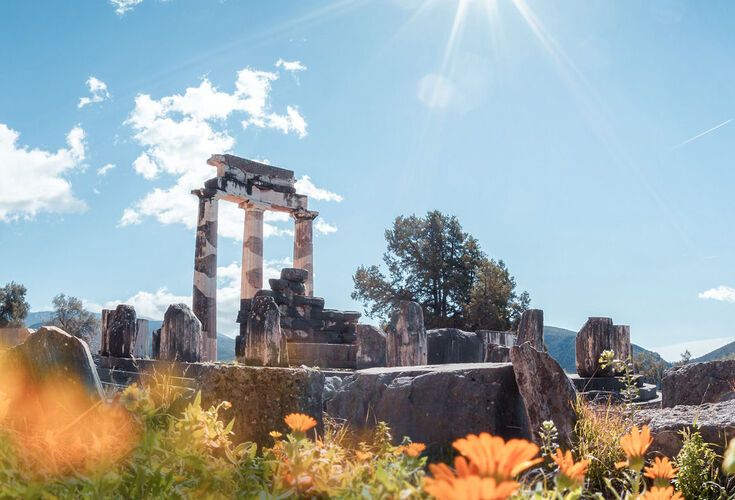