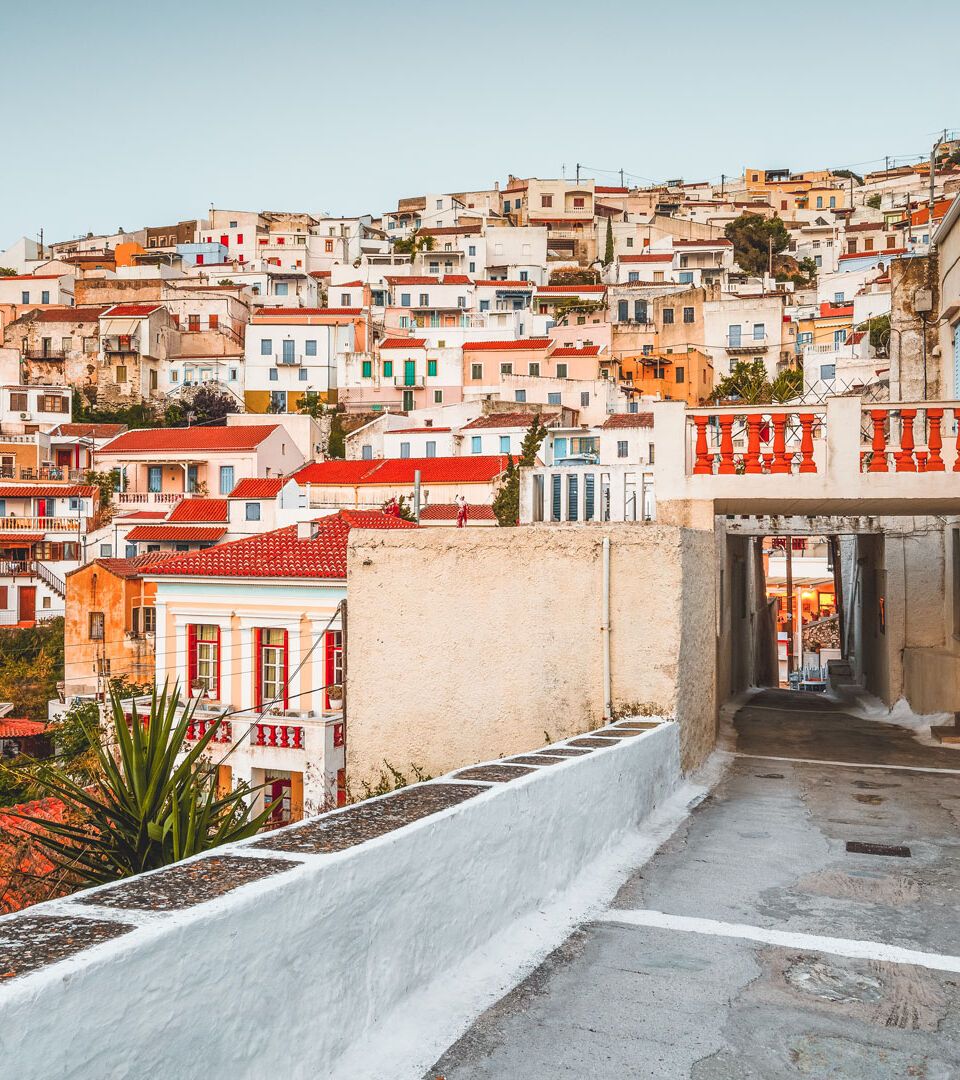 Cosmopolitan and friendly Tzia is just an hour away from the port of Lavrio, east of Athens. Those who know the island – whether as Tzia or its alternatives Kea, Gia or Zea – begin their weekend sojourns in spring, enjoying fresh fish at the tavernas in the marinas. You’ll love discovering its beaches, old churches, Hellenistic towers, watermills and windmills… and trekking its trails that pass no fewer than four ancient cities (Ioulis, Korissia, Poiessa and Karthaia). Mythology says that the first home of the nymphs was here and it isn’t hard to imagine why.

What to do in Tzia

The carved statue of the Lion of Ioulis is the guard and emblem of the island, associated with its myths and dating to the early Archaic Period.

Ioulis: An ancient city in Tzia

For a walk that takes you back in time, come to Ioulis – of the ancient cities, the only one built inland. Spread along the slope like an amphitheatre, it invites you to lose yourself in the magic of its stately homes, vaulted alleys, fountains, traditional architecture and Venetian castle. Devote a moment to the neoclassical Town Hall, designed by the famous architect Ernst Ziller. The Archaeological Museum, considered one of the most important of its kind in the Cyclades, is a must-see.

Shipwrecks of the deep

The HMHS Britannic, sister-ship to the Titanic, was sunk near Tzia by a German naval mine in 1916 on only its sixth voyage. Jacques Yves Cousteau’s team explored it in 1975 but, to date, few divers have approached the wreck, located at a depth of 120m, even though it’s considered one of the most significant shipwrecks in the Mediterranean. On the reef of Koundourou, there’s another sunken ship – the steamer Patris that went down in 1868.

A day in the Classical period

“This narrow, rocky land of Karthaia, I would not exchange it with Babylon,” wrote the ancient Greek poet Pindar.  It’s worth devoting a day to visit the most important of all the four ancient cities of Tzia, which flourished in the Archaic period. Here history comes to life in the Doric Temple of Pythiou Apollona, built in 530 BC and thought to be dedicated to Athens. Try to arrive at Karthaia by the ancient trail of Vathipotamou, just as worshippers once did. A one-hour walk is rewarded by a refreshing swim at Poles beach.

A dip in the sea

The sandy beaches of Vourkari, Gialiskari, Korissia, Koundouros, Orkos, Pisses and Spathi are shaded by eucalyptus trees, among others, and all boast calm, clear waters. They are especially popular with boat owners.

A short distance from Sklavonikola, you will discover a part of the Tower of Panachras, from the Hellenistic period, measuring 4.5m in height. There is also the nearby tower of Agia Marina. At five storeys, it is one of the tallest surviving monuments of the Mediterranean.

Plan a trip to the prehistoric settlements of Agia Irini and Kefalas, which remain in good condition.

If you’re into off-road driving, come with your jeep: you’ll love the dirt roads of Tzia. A more sedate way to get to know the island is by trekking its many signposted trails.

Experience the best of Tzia