The volcanic retro island with a vintage charm 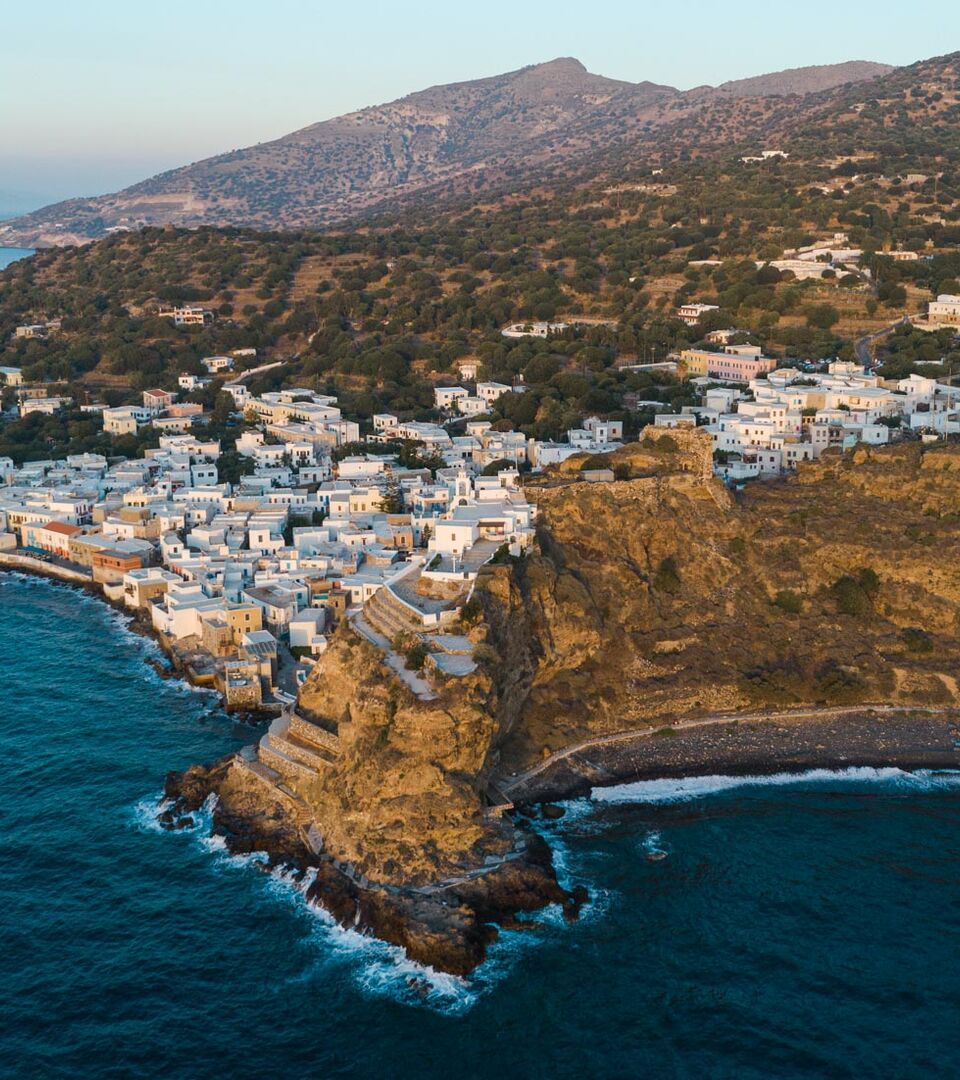 Here’s a riddle: It’s an Aegean island that has a volcano, but it’s not Santorini. Its nearest neighbour is long, green Kos, but it doesn’t resemble it in the slightest. What is it?

One of the hidden treasures of the Aegean, the small, round island of Nisyros is well off the beaten track and has kept a retro atmosphere, but in recent years more and more people have discovered its name and are spreading the word.

Like them, you’ll be rewarded by visiting traditional villages, quiet spots to enjoy ouzo with meze, ancient walls of black volcanic stone, and the excitement of venturing into the moonscape and hiking along the rim of an active volcano.

What to do in Nisyros

You don’t get to visit a volcano every day. What’s more, this one has three craters. The locals feel so proud of them they’ve even baptised them: Stephanos, Alexandros and Polyvotis. Or maybe they hoped that doing so will pacify them! Two eruptions, 25,000 and 15,000 years ago, gave birth to today’s caldera. As you descend into the enormous crater, you could be entering an unknown, yellow-streaked, ashen planet, with bubbling pits, enormous cracks, and a powerful stench of sulphur. Only Mephistopheles is missing.

This sleepy port is just the right antidote to any hectic schedule. Take a seat with the locals and enjoy a coffee in one of the town squares, or explore the alleys lined by vintage grocery stores and simple white houses with brightly coloured doors and windows. Or take a stroll along the jetty and onto the beach, which features not sand but glistening smooth black stones.

At sunset all the landmarks – buildings, citrus groves, church domes – turn golden. At one of them, the white Panagia Spiliani above Mandraki, the celebrations honouring the Virgin in mid-August go on for nine days. Visitors from all the surrounding islands join the locals in rites that go back centuries.

‘I’ll meet you at the Porta in Nikeia’

You might think Porta is a gate but it’s actually the square of this village, which is known for its elliptical shape and elegant pebble mosaic flooring. The church above it ranks among one of the most beautiful in Greece.

An architectural gem of a village, topped by the fortress of Pantoniki (meaning ‘always victorious’). Don’t miss the beautiful Aegean view.

The paths of Nisyros attract hikers from all over, some returning year after year. They wind along dry-stone walls and past stone farmhouses, rustic distilleries and tiny churches.

The Volcanic Museum of Nisyros

The Volcanic Museum has all you want to know about Greece’s volcanoes and their different rock formations. It’s housed in Nikeia’s old elementary school.

There are spas with hot mineral springs all over the island. Just a kilometre from Mandraki, you can see an early 20th-century, vintage spa.

This is the name of the island’s acropolis. Its massive walls, made of black volcanic rock, are particularly impressive.

#discovergreece
See the gallery
Enjoy your coffee in Nikaias village square or admire the amazing caldera views
Enjoy the sunset by the sea at Mandraki
Palaiokastro is the island’s acropolis with massive walls, made of black volcanic rock
Take a seat with the locals and enjoy a coffee in cozy Mandraki
Explore the alleys of Mandraki in Nysiros lined by vintage grocery stores and whitewashed houses with brightly coloured doors and windows
Enjoy the view from the monastery Timiou Prodromou
Emporios is a gem of a village, topped by the fortress of Pantoniki
You will enjoy amazing Aegean views from Emporios village
Strolling around the alleys of Mandraki in Nisyros
In Nisyros you will be rewared by the excitement of venturing into the moonscape and hiking along the rim of an active volcano
Cats in a street of Mandraki village on Nisyros island
The famous Monastery of Panagia Spiliani, Nisyros
You don’t get to visit a volcano every day
Nikia village, a lovely picturesque area to get lost
Mavi pencereleriyle beyaz bir ev
From Profitis Ilias chapel (located near Nisyros' volcano) you can enjoy amazing Aegean views
The one of three craters of Nisyros' volcano
Whitewashed houses and picturesque alleys of Mandraki will feed you Instagram account