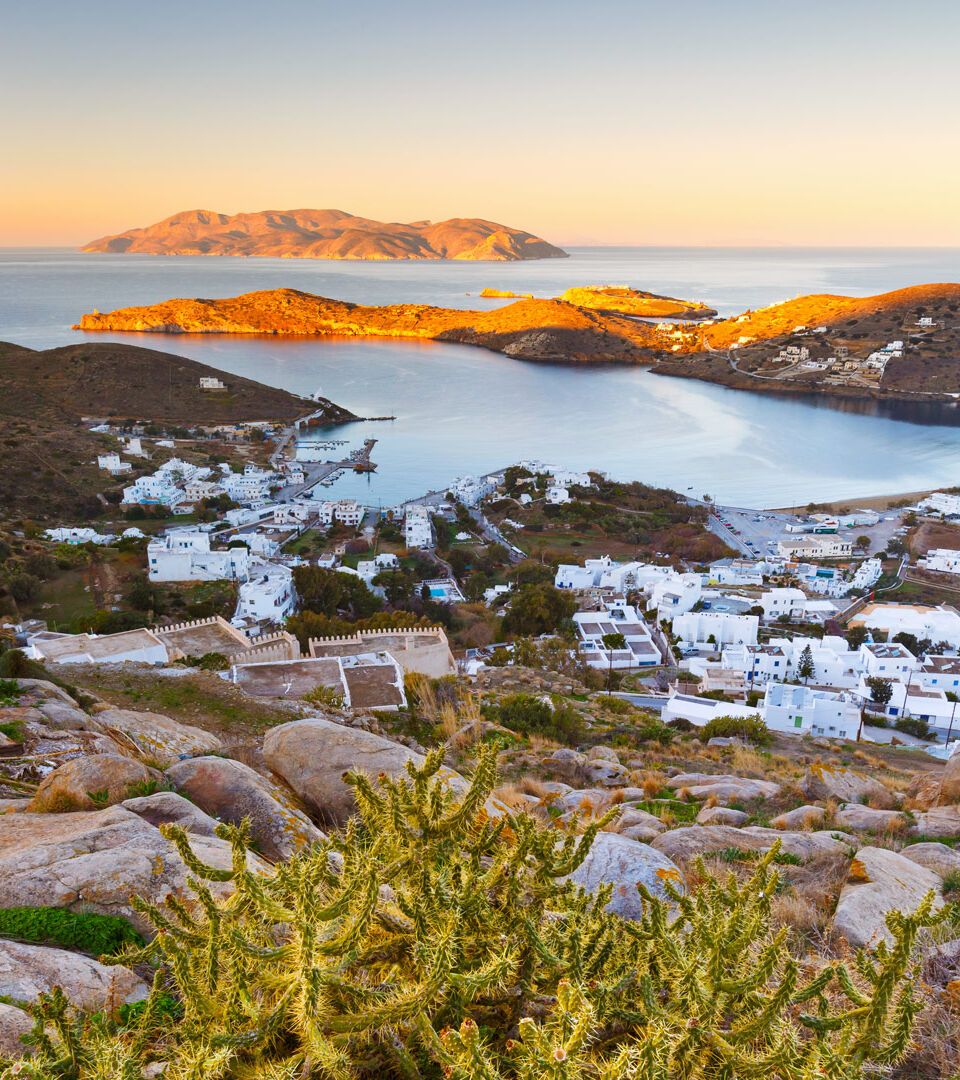 Сегодня
4°
THU
7°
FRI
8°
SAT
7°
SUN
8°
Time slows down as you arrive in Sikinos, a lesser-known gem of Greece’s famous Cyclades islands, where you will rediscover the innocence of nature and be surrounded by classic Greek beauty

Legend says that the flower-laden gods of love would skip joyously around the Greek islands, resting in decorous gardens or on quiet beaches along the way. True to form, on one small island they arranged a marriage between the dethroned king Thoas and the nymph Niis. It was their child, Sikinos, that gave his name to this little haven in the Aegean, which – according to a popular Greek song – the Blessed Virgin “holds in her lap”.

Small, unspoilt and close to Ios and Folegandros in the southern part of the Cyclades, Sikinos has a special way of offering visitors what they want from a holiday. It promises a collage of natural scenery, tranquillity, a very human touch and a delicious taste of the proud traditions of the Cyclades.

As the boat approaches the harbour of Sikinos, you’ll find yourself forgetting the frenzied pace of city life. In its place, you instantly discover the soothing pulse of an island masterfully crafted by wind and wave!

Things to do on Sikinos island

Take a stroll and enjoy the best of the Cyclades

Hora, the main town of Sikinos, is a delicate vignette with two different backgrounds. On one slope of the mountainside is Kastro, a fortified hamlet built on the edge of a cliff, dating to the 15th century. When you enter through the side gate, you are welcomed by a sight that encapsulates everything magical about the Cyclades islands: white houses over a century old, alleyways scented by jasmine and yards with bougainvillea, geraniums and vine trees. Three windmills stand proud at the clifftop, facing out to sea and in the square you can visit a collection of post-Byzantine-era icons. Meanwhile, to the south of Horio is a labyrinth of narrow alleyways connecting houses, flowerbeds and tranquil hidden corners. Look out for the folk museum of Sikinos. It’s a must.

Pick your favourite beach… there’s quite a choice

The beaches of Sikinos are virginal with clear blue waters. Sandy Alopronia, pebbly Agios Georgios and Dialiskari, with a natural sunshade of tamarisk trees are all accessible by car. If you decide to go by caique or take a footpath, your choice widens: Agios Panteleimonas, Santorineika, Agios Ioannis, Karras and Maltas.

Visit the beautiful monasteries and churches

Built on the highest point of Kastro in 1690, the Monastery of Zoodohos Pigi (Hrisopigi) served as a refuge for the residents of Sikinos against pirates who once tormented the island. Take an early evening climb and enjoy the seamless blue of Aegean Sea and sky. Next up is Pantanassa, located in the square of Kastro, a 1787-built church housing a remarkable gilded wooden icon screen. And finally, the church of Episkopi is testimony to a long history of overlapping cultures and religions on Sikinos, consisting of a main temple, the chapel of Agia Anna and abandoned cells. It was built as a Roman mausoleum in the 3rd century AD and converted into a Christian temple in the 17th century, with a dome, bell tower and chancel.

Experience the religious celebrations of Sikinos

Visiting during the days of a religious celebration will give you the opportunity to experience the panigirades custom of Sikinos. After the procession, members of the faith assume the responsibility of keeping a holy icon in their home for a year.

This cave in northern Sikinos, under the Monastery of Hrisopigi, is among the most beautiful of the Cyclades and accessible only by sea.

Between Kastro and the Monastery of Hrisopigi is a chapel devoted to the Holy Mother of God, the Joybringer, that appears to float in the air. It was pledged to Sikinos by revered poet Odysseas Elitis and is a delightful spot imbued with an atmosphere of innocence and natural beauty – a vantage point across the Aegean that Elitis himself extols for its “crystalline” clarity.

The footpaths of Sikinos

Remnants of ancient hamlets, Byzantine churches, gorges, remote beaches, glades with panoramic views and lush nature are some of Sikinos’ gifts to hikers.