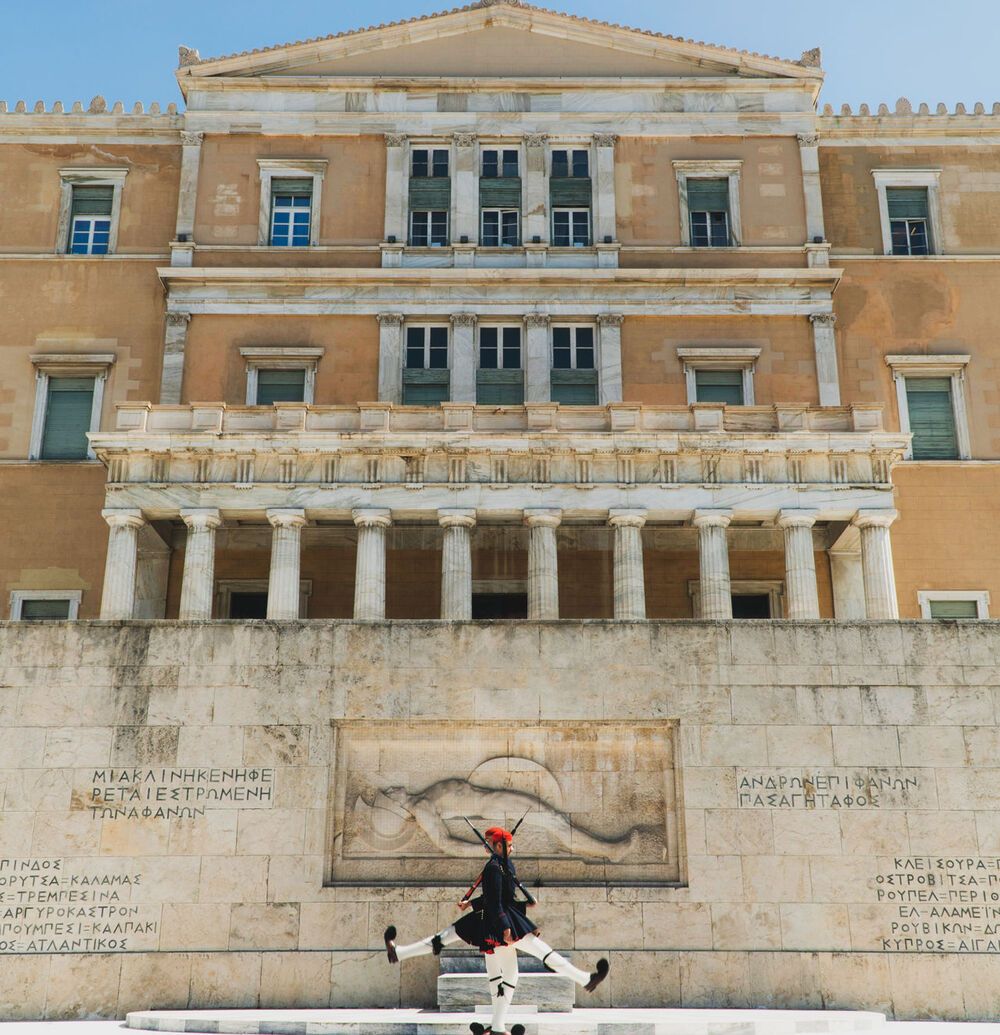 Athens is dotted with architectural marvels that bear witness to the city’s glorious and turbulent past. Elegant mansions and marbled neoclassical buildings of the 19th-century blend with modern multi-storey housing (known as polykatikies), all contributing to the city’s quirky urbanscape. So join us as we take a stroll around the city centre and discover 12 landmark Athens buildings that showcase a unique architectural heritage.

Situated at the top of Syntagma Square, the current Greek Parliament building served as the Royal Palace of King Otto and Queen Amalia (who commissioned the adjoining National Garden) and later by King George I and his family. Its construction began in 1836, three years after Athens became the capital of the new Greek state. Designed by the Bavarian architect Friedrich von Gärtner and built by Italian stonemasons and German carpenters, it’s the largest neoclassical structure in Athens.

The royal family resided here until a fire in 1909 and it became the seat of Parliament in 1929, five years after a referendum abolished the monarchy. If you visit on the hour, you will witness the Changing of the Presidential Guard by the Evzones (special guards) protecting the Tomb of the Unknown Soldier.

As you stroll up Panepistimiou St towards Syntagma Square, you encounter three imposing neoclassical buildings – collectively known as the Athenian Trilogy – that were designed to show the vision and prestige of King Otto and put the words ‘Athens architecture’ on the map. The central building – the University of Athens – was built first (from 1839) from designs by Danish architect Christian Hansen. You’ll note a magnificent mural on the front, depicting King Otto alongside classical personifications of the arts and sciences.

To the right is the Academy of Athens, Greece’s highest research establishment, designed by Theophil Hansen (brother of Christian), who was clearly inspired by the Acropolis. It was finished in 1885 by Hansen’s student, Ernst Ziller, a Saxony-born architect who you’ll be hearing a lot more about. Statues of Athena and Apollo sit on Ionic columns either side of the entrance, with sculptures of Plato and Socrates below.

To the left is the National Library (also known as Vallianeio Mansion), with its distinctive semi-circular staircase. Construction began in 1888 according to plans by Theophil Hansen and it was finished under the supervision of Ziller. The original tomes and manuscripts are now housed in the current National Library, at the Stavros Niarchos Foundation Cultural Centre.

The neoclassical building that houses the National Archaeological Museum was built at the end of the 19th century and was another intended to showcase the new face of architecture in Athens. The original designs were made by the architect Ludwig Lange but they were modified by Ziller and Panagis Kalkos. The museum’s exhibition halls cover an area of 8,000 m², housing five major permanent collections. There is a wonderful garden in front of the museum, decorated with sculptures.

The building that, since 1960, has housed the National Historical Museum is one of the most important in Athens. It served as the Parliament House from 1875-1935 and was the original base of the Greek National Assembly. However, its story begins even earlier. Once the home of Athenian industrialist Alexandros Kontostavlos, it was selected by King Otto in 1833 as a permanent residence of the royal family.

From 1843-1854, it was used as a meeting hall for the Parliament and Senate, until it burned down in 1854. Since 1960 it has housed the National Historical Museum. By the entrance, you will find a statue of Theodoros Kolokotronis, one of the heroes of the 1821 Greek War of Independence.

Dating from before the 18th century, the site of the Athens University History Museum is considered one of the oldest residential buildings still standing in the city. It belonged to the architect Stamatios Kleanthis and, built on the slopes of Acropolis Hill, offers a magnificent view of the old city centre. From 1837-1841, it housed the first university of independent Greece which, for about a century, was the only institution for higher education in Greece, leading to it being known as the ‘Old University’.  The Athens University History Museum displays rare books, manuscripts and diplomas as well as scientific instruments and other memorabilia of the museum. 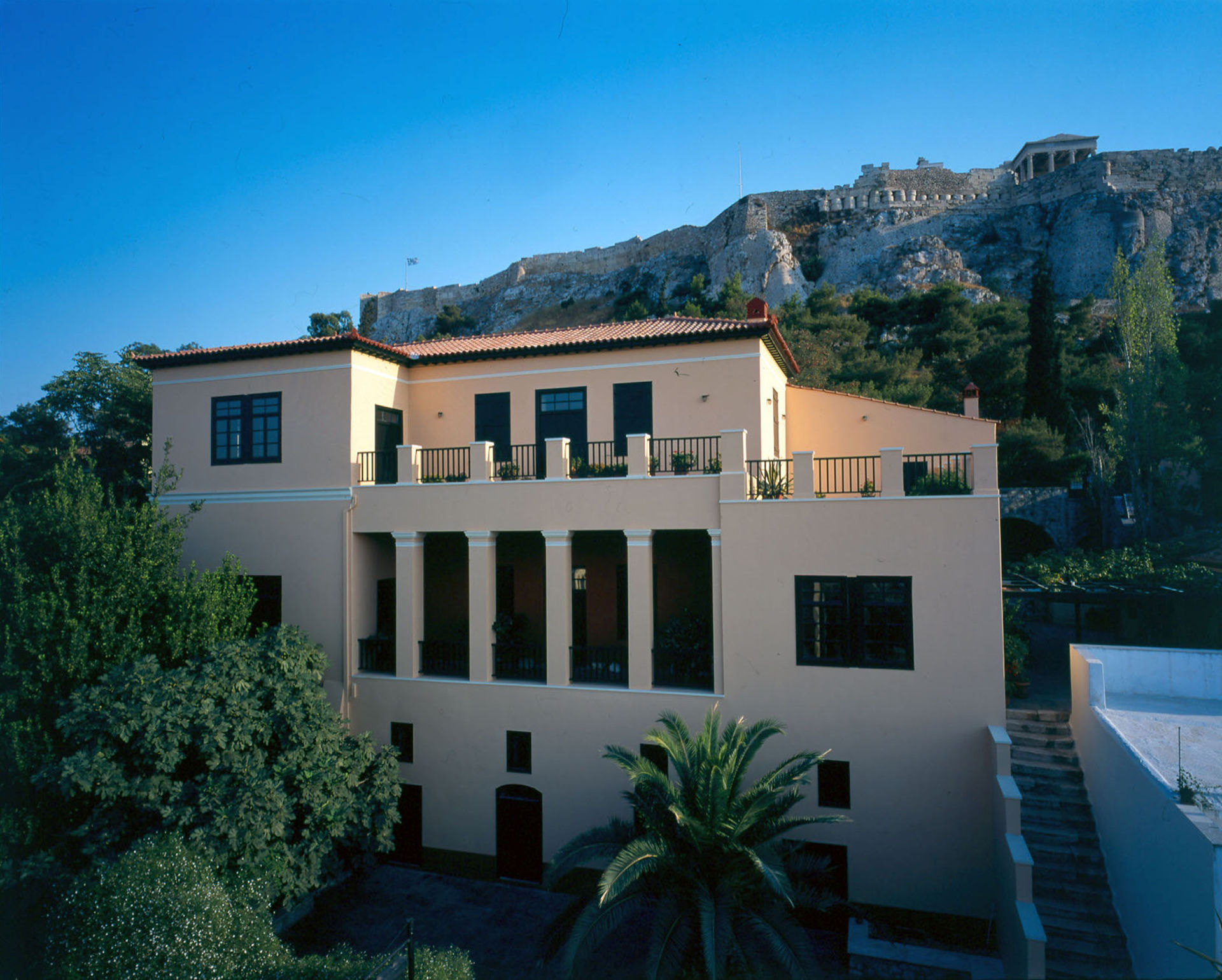 Two of the Greek capital´s oldest buildings, close to Klafthmonos Square in central Athens, house the Athens City Museum (Vouros-Eutaxias Foundation). The two-floor residence at No.5 was renovated in 1916, displaying elements of eclecticism (the architectural style incorporating numerous historical motifs which dominated Athens by the late 19th century). Today’s façade isn’t the original, designed by military engineer Gerasimos Metaxas. However, it still preserves its past glory. Dubbed the ‘Old Palace’, the neoclassical house at No.7 belonged to a wealthy banker from the island of Chios. When the capital of Greece moved to Athens, it became the first residence of King Otto and Queen Amalia in the city. The buildings were transformed into the Athens City Museum in the 1970s.

Zappeion Hall (or Mansion) is another grand design of Danish architect Theophil Hansen, opening in 1888. However, its inspiration came from wealthy benefactor Evangelos Zappas some decades earlier, in the plans being made for Athens to host the first modern Olympic Games in 1896. As such, it has been dubbed the first purpose-built Olympic building. You’ll recognise Hansen’s neoclassical style, with the Corinthian portico being used to stage fencing events in the first Games.

It has since been used as a location for Greece’s first state radio station (for four decades), as a hospital and to house the organising committee ahead of the 2004 Athens Olympics. It now functions as an exhibition space. From here, you can enter the National Garden, which also has exits to Maximos Mansion (residence of the Prime Minister) and the Presidential Mansion on Irodou Attikou St.

With over 100,000 volumes and manuscripts on Greek history, literature and art from antiquity, the Gennadaion (as it is also known) is one of the most important libraries in Athens. It is also one of the most beautiful, located in a striking 1920s building designed in the style of a classical temple and garden and situated in a leafy enclave under Lycabettus Hill. It was built with a grant from the Carnegie Foundation to house the 26,000 rare works donated by Joannes Gennadius, a Greek diplomat and bibliophile. Opposite is the American School of Classical Studies, which owns the library.

The Iliou Melathron (as the building is called) has a grand history. It was designed by one of Athens’ greatest architects (Ernst Ziller) as a residence for one of Greece’s most celebrated archaeologists, Heinrich Schliemann (who excavated ancient Mycenae and Troy). Built between 1878-1880, it is considered one of Ziller’s finest structures, uniting Renaissance and neoclassical styles, and is adorned with frescoes and mosaics with themes from the Trojan War and other ancient episodes inspired by Schliemann’s work. The museum, which has a garden cafe, has a collection of 500,000 coins, medals, gems, stamps and other artefacts from 1400 BC to modern times.

Another iconic former Athens residence awaits at the Stathatos Mansion, now the location of one of the city’s leading private museums. It is one of the most striking buildings on Vasilissis Sofias Ave, with a lavish corner entrance leading to an elaborate portico and arched facade supporting a first-floor balcony. Crowning the roof are statues of the goddesses Athena and Nike. We once again have Ziller to thank for its design in 1895 (with aspects of classic Greek and Roman architecture to the fore). Originally built for the prominent Stathatos family, it has undergone various renovations (including use as an embassy) until it was acquired by the Greek state and granted to the Goulandris Foundation, which established the Museum of Cycladic Art in 1986. The Stathatos Mansion is now used for the museum’s temporary collections, with access to the permanent collection being from the adjoining new building on Neofitou Douka St. 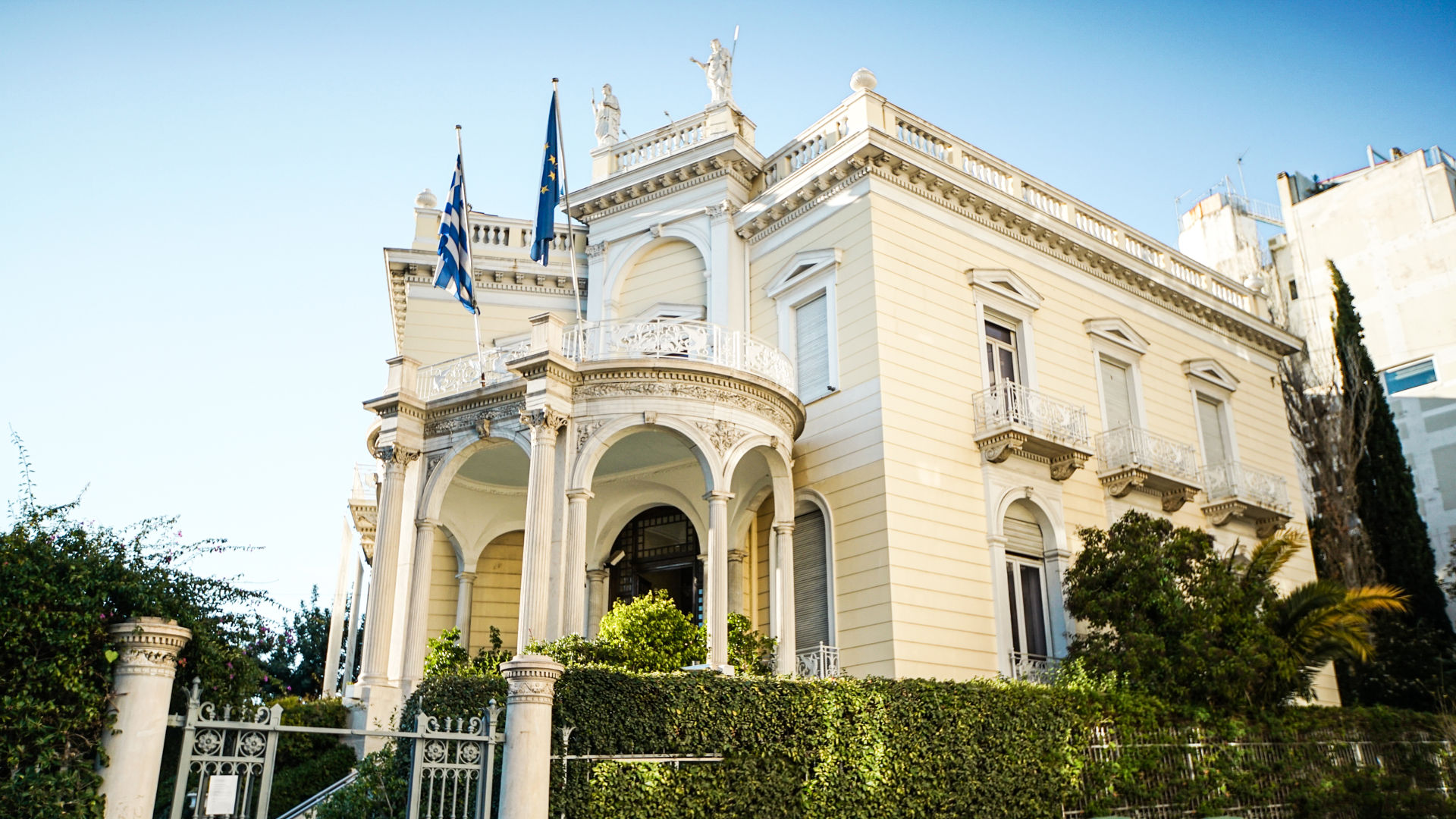 Athens’ City Hall, a short walk from Omonia Square, has seen numerous renovations since it was constructed in 1874, but its function has never changed. As the seat of the municipality, it has overseen the development of Athens for close to 150 years. Designed by architect Panagiotis Kalkos, and built with a 130,000 drachma loan from the Bank of Greece, it was originally two floors (and the municipality occupied only one of them). But as the functions of City Hall grew so did its needs for floor space, so a third floor was added in 1937. Its simple neoclassical exterior contrasts with the details of the paintings and murals of renowned 19-century Greek artists inside, with representations of mythological and historic themes.

Your final historical Athens building is designed by – who else? – Ernst Ziller. The Royal Theatre (as it was originally known) was commissioned by King George I and built between 1895-1901. It is regarded as one of the most beautiful neoclassical buildings in Athens and, though it was briefly forced to close in the early 20th century, it was renovated in the 1930s and reopened as the National Theatre. The small plot size and incline of the land make Ziller’s design all the more impressive.

So what caught your eye about the landmark buildings of Athens? Was it the majesty of the Athens Trilogy? Or maybe it was a one-time private neoclassical house turned into a museum? Either way, we bet you’ll never look at Athens in the same way again.

Group
From the Acropolis to Omonia Square, with the half-day city and Acropolis museum tour you'll see all the impressive sites of ancient and modern Athens....
Group
Catch the latest concepts before they trend and find out what fearless post-crisis fashion looks like on you! With more freedom to create, Greek designers...
Group
Come chase gods and heroes! This is a golden opportunity for families to explore the true roots of Greek mythology with a unique activity tour....
УЗНАТЬ БОЛЬШЕ