The Museum was built in 1962 by the architect Patroklos Karantinos and is considered a listed monument. Its staff consists of scientific, technical and administrative personnel who struggle to offer quality services.
View on map
See the gallery

The story of the Archaeological Museum of Thessaloniki follows the course of history of the modern city of Thessaloniki. The Ephorate of Antiquities "under the General Directorate of Macedonia" was the first institution founded in November 1912, only two weeks after the signing of the treaty that handed over control of the city to Greece. Until 1925, all antiquities found in Macedonia were gathered at the Residency (Dioikitirion- the modern-day building of the Ministry of Macedonia-Thrace) as well as the Ottoman Idadie School, which housed the Faculty of Philosophy of the Aristotle University. During World War I, the French Army (Armee Francaise d’ Orient) was gathering antiquities initially at Karabournaki and later on at Rotonda, while the British Army would gather the antiquities they uncovered at the White Tower. In 1925, the Yeni Cami, the new mosque, the centre of worship for the Donmeh population of the Ottoman-occupied Thessaloniki, was given to the Archaeological Service. The Yeni Cami would become the city's first Museum, as the inscription still in place on its facade indicates. In 1940 many antiquities, mainly sculptures, were buried in trenches in order to be protected from war raids. They were unearthed in 1951 and displayed for the first time in the main hall of the Archaeological Museum (Yeni Cami) in 1953.

Construction at the Archaeological Museum of Thessaloniki began in 1960, on ΧΑΝΘ Square (YMCA) , in close proximity to the International Trade Fair grounds. The building was designed by the renowned architect Patroklos Karantinos, a prominent representative of the modernist movement in Greek architecture.

The story of the building

The Museum collections include numerous artefacts dating from the Prehistoric era to the end of antiquity. They come from excavations conducted throughout Macedonia since 1912, along with handed-in antiquities. 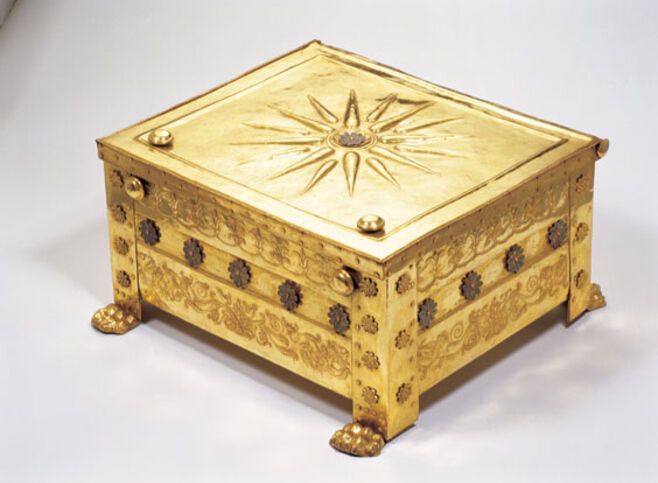 Vergina, p.c. 591 00
Constructed during the reign of Philip II (359-336 π.Χ.), the palace of Aigai is not only the biggest but, together with the Parthenon, the most significant building of classical Greece.
BOOK NOW MORE
МЕСТО НАЗНАЧЕНИЯ