Constructed during the reign of Philip II (359-336 π.Χ.), the palace of Aigai is not only the biggest but, together with the Parthenon, the most significant building of classical Greece.
View on map
See the gallery

Touring the site of Aigai

The archaeological site of Aigai is protected by UNESCO as a world cultural heritage monument and a site of outstanding natural beauty.

The site of Aigai consists of the Polycentric Museum, the palace, the city, the acropolis and the surrounding area.

Visiting the site’s exhibitions that are open to public, such as the royal burial cluster of Philip II, and those still under construction (the Virtual Museum for Alexander the Great and the New Building of the Polycentric Museum), and touring the site’s monuments (palace, royal necropolis of the Temenid dynasty), which are currently in the process of conservation and promotion, as well as exploring the Virtual Museum of Alexander the Great and the digital tour in the ancient Macedonian kingdom, which are being prepared within the framework of the NSRF and will be accessible to the public by the end of 2015, visitors can formulate a general and rather dynamic view of the ancient capital of the Macedonian kingdom and, at the same time, comprehend its historical significance.

Constructed during the reign of Philip II (359-336 π.Χ.), the palace of Aigai is not only the biggest but, together with the Parthenon, the most significant building of classical Greece.

Built in the city of Aigai, on a raised outcrop of the hill, this huge building –the biggest in classical Greece and three times the size of Parthenon- was visible from the whole Macedonian basin; a remarkable landmark, a symbol of power and beauty. A unique building, utterly revolutionary and avant-garde for its time, the palace of Aigai, which was designed for Philip by an ingenious architect –probably Pytheos, known for his contribution to the construction of the Mausoleum at Halicarnassus and to the development of urban planning and the theory of proportion- will become an archetype of all basileia (kingdoms), i.e. the palaces in the Hellenistic world and beyond.

The masonry and architectural members, all artfully processed, were covered with lustrous high-quality marble stucco that resembles marble and calls to remembrance Vitruvius’ description of the plaster used in Mausolus’ palace that shined as if made of glass. Thousands of roofing tiles and relief antefixes of excellent quality, hundreds of square meters of floors covered with marble inlays and mosaics, some of which constitute exceptional works of art, extravagant pigments, bronze and all kinds of luxurious materials were used to create a complex that would fulfill the king’s ambition. However, beyond the luxurious materials, the inventiveness and perfection of construction techniques, and the astonishing technological achievements traced on all levels of construction, the most fascinating and dominant element of this unique building is its ingenious architectural conception.

The large square peristyle (row of columns surrounding a space within a building) –the “heart” of the building- together with the areas surrounding it, and the impressive propylon (structure forming the entrance to a building) enclosed by stoes (porticos, roofed colonnades) that form the façade, constitute the basic elements of this innovative for its era architectural project.

At the southwestern edge of the cemetery of the tumuli, next to the old Town Hall of Vergina and on the road leading to the Palace, works are in progress for the modification and promotion of the royal burial cluster of the Temenid dynasty. This tomb complex consists of three Macedonian tombs, two hypostyle tombs and a series of monumental cist graves dated back to a period extending from the first half of the 6th century BC to the beginning of the 3rd century BC. As the burial customs and the grave offerings accompanying the dead attest, all these impressive burial monuments belong to kings, prestigious members of the Temenid dynasty.

The funeral of Philip II in 336 BC was performed, as imposed by tradition, in Aigai. It was the most lavish funeral ceremony of the historic times held in Greece. In a monumental death chamber, laid on an elaborate gold and ivory deathbed wearing his precious golden oak wreath, the king was surrendered, like a new Hercules, to the funeral pyre. Alexander is now the king of Macedon. A “high priest” and a mystis (the initiated one), a hunter and a “symposiast”, an army leader and a legislator, Philip, the hero, descends to his eternal residence, which is reached by a ramp and has the form of an underground barrel-vaulted building with two chambers and a monumental façade. The concept of the “Macedonian tomb”, similar to the platonic concept of the leaders’ burial in an ideal state, interweaves a palace and a temple. The portraits of the two kings, father and son, are depicted in the hunting scene of the tomb’s façade, as well as on the gold and ivory deathbed in the chamber.

In the tomb’s antechamber, Philip’s Thracian wife, Meda, is buried with him.

Next to him, just a few years before, another distinctive member of his family, probably Nikissipoli, another wife of his, was buried in an, unfortunately plundered, cist grave. The only wall painting in the tomb pictures the Abduction of Persephone by the God of the Underworld, the silent Demeter and the three unprejudiced Fates with Hermes, the Guide of Souls, leading the way, and a scared nymph witnessing the horrifying event. This is a unique example of ancient painting, as well as one of the few surviving depictions of the ancient mystic views of afterlife.

25 years after Philip’s assassination, the son of Alexander and Roxane, Alexander IV, also assassinated by Cassander, finds his last residence next to his heroic grandfather.
Evidences of the destruction that suffered the necropolis of Aigai from the Gallic mercenaries of Epirotean Pyrrhus in the first decades of the 3rd century BC are the brutally looted heroon (over-ground building monumental sanctuary for a hero), once a building above ground, dedicated to the memory and worship of the glorious dead, the one-chamber Macedonian tomb of the free standing Doric column façade, as well as an abundance of broken funerary steles from the graves of common citizens bearing the names of Macedonians in the Classical times.

The imposing dark shell covering the royal burial cluster of Philip houses an exhibition of the artifacts touched by living kings and people that took part in the uppermost ritual of the royal heroic exit from the world of phenomena to eternity. At the same time, visitors have a unique chance to admire the whole spectrum of ancient Greek art in the late Classical times (architecture, painting, artistic metalwork, weaponry, jewelry) in its highest form.

The new building that is being constructed on a land plot of 140 ha to the west of Vergina will be the entrance to the Polycentric Museum and the archaeological site of Aigai. It will house a permanent semi-open-air exhibition of the sculptures found in the city sanctuaries and will accommodate the restored upper floor of the Palace’s façade.

The large uniform exhibition area that will be constructed, will be used to present temporary thematic exhibitions that concern the life, civilization and history of Aigai. The first exhibition that will open to public in 2016 will be entitled “The Memory of Aigai”. The new building will also be the physical “home” of the virtual museum “Alexander the Great: from Aigai to the World”, as well as of the digital network that will operate as a touring guide to the ancient kingdom of Macedonians.

The Royal Tombs Museum and the surrounding space are easily accessible for people with disabilities.

Vergina is located 8 km southeast of the city of Veroia. There is a frequent public transport connection between Vergina and Veroia. Veroia is frequently and regularly connected to Thessaloniki by road and rail, and also directly connected to Athens. 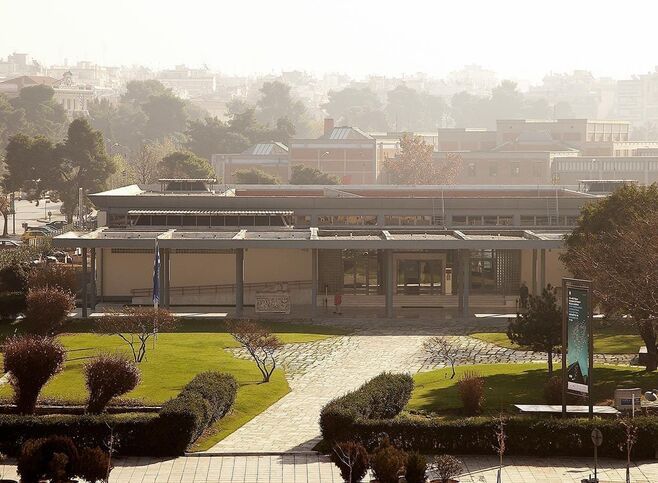 6, Manoli Andronikou Str. p.o. Box 546 21
The Museum was built in 1962 by the architect Patroklos Karantinos and is considered a listed monument. Its staff consists of scientific, technical and administrative personnel who struggle to offer quality services.
BOOK NOW MORE
МЕСТО НАЗНАЧЕНИЯ 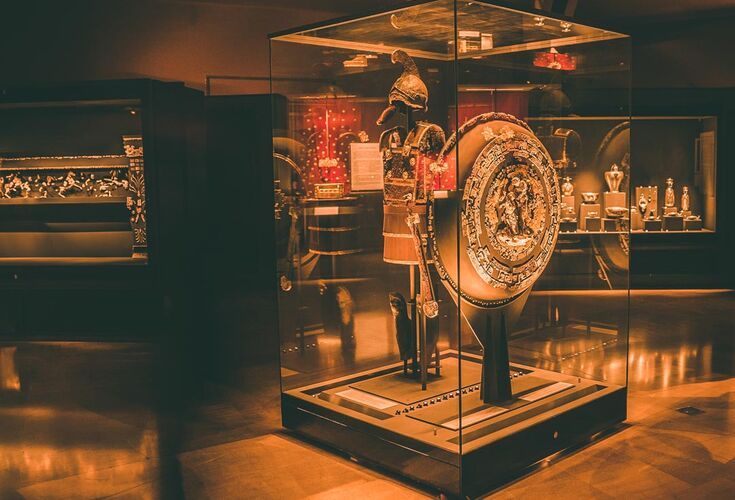