Rhodes: The thrill of uncovering its timeless treasures

I’ve been visiting Rhodes for 40 years now, and each time I feel that special tingle of anticipation that I’m about to make a new discovery
READING TIME
As long as it takes to drink a Greek coffee

I’ve been visiting Rhodes for 40 years now, and each time I feel that special tingle of anticipation that I’m about to make a new discovery. A spectacle? A shop? A new friend in a mountainous village? A new hotel… you know, the kind that enchants its guests and fills Instagram with dreamy photographs? A book presentation? A journey through art, following in the footsteps of a leading contemporary creator whose work is being displayed at the Museum of Modern Art? Or perhaps a journey through space-time, to a period whose mark remains indelible?

This is the experiential journey of Rhodes… like a diamond hidden within a hibiscus flower, the island’s symbol since antiquity. The heady scent of adrenaline.

Because, in the town of Rhodes, there are certain spots that radiate history, culture, charm, mysticism and nobility.

Every photograph taken in such a place captures the feeling that, somehow, Rhodes has conquered time, regardless of the fashion that portrays every figure as an idol.

The Old Town, the Rodiaki Epavli, the port of Mandraki, the buildings on Evdomis Martiou Square, the aquarium, the coastal route from Psaropoula to Kritika and the historical Grande Albergo delle Rose – Casino Rodos hotel … take all of these, together, and you have a scene that allows you to embark on a journey through eternity.

With a history going back centuries, if not millennia, they are created from Italian stonework to retain their symbolism within the colours of the sea that they face for as long as they can endure.

Like a buccaneer, I try to invade their secret corners each time I visit. I want to see how well hidden is the spirit of the times that have infiltrated them.

In the town of Rhodes, there are certain spots that radiate history, culture, charm, mysticism and nobility

I’m certain that very few people have had the curiosity to stride the stage curtains of this theatre. And fewer still allow themselves to be drawn in by the earthy magnetism emitted by the stone-paved streets within the castle. So how many have explored the ruins of the mill or have hugged the rocks during the magic hour to feel like a redeemed castaway of fate and the sea? Few.

Just as it is few who have had that tingle of anticipation of experiencing the simple grandeur of Rhodes’ casino. Where it’s not only the whir of the roulette ball that fills the air with possibility but also to the echoes of famous guests of the past who have lived out their dreams, small or large, in the gardens, lounges and guestrooms of the historic hotel.

Rhodes was and always will be a cosmopolitan isle. This is what made it what it is and the reason it continues to attract worldly visitors. People who seek culture… even from the sand. 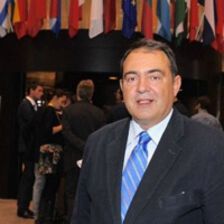 George Syriopoulos is a Greek Communications Consultant and Journalist, born in Athens (1963), working as Correspondent for the national Greek television broadcaster, ERT TV in Brussels. He specialises in European Union affairs and characterizes himself as an “unrepentant European federalist”. Having the opportunity to travel often, he admires Greece as country that transmits culture over the world. Highly educated in Journalism, and in European Studies, he is the holder of a Master’s of Science in Public & General Administration. Married, father of three children (19,17,11).